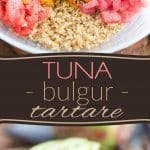 This Tuna Bulgur Tartare is such a nice twist on a great classic: it’s fresh, it’s tasty, it’s crunchy, it’s chewy, nutty and not fishy in the least! It has a flavor profile that is so subtle, making it perfectly accessible even to those who aren’t sold on the idea of eating raw fish… 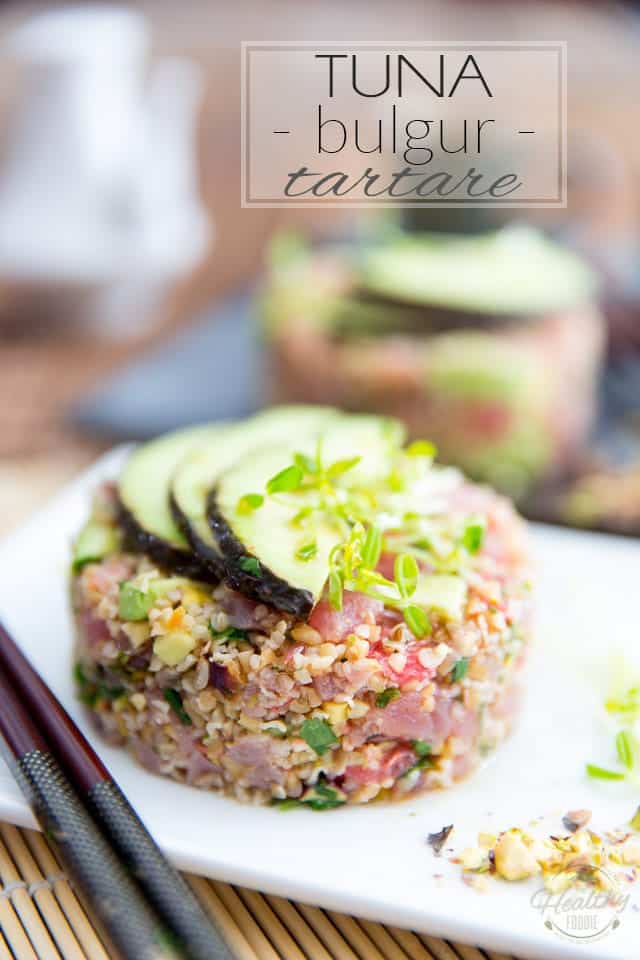 Personally, I always love me a good tartare. No way I could ever turn one down… they are the ultimate light meal or appetizer; so fresh and tasty! And when it comes to making them, your imagination is the limit!

To be honest, the idea of adding bulgur to a tartare would never have occurred to me, would I not have seen it on the cover of a magazine while I was waiting in line at the store. Unfortunately, I didn’t even have time to pick it up, it was my turn to pay, but the picture alone had done it’s job… I knew I had to make it!

Frankly, I fell head over heels with this combo. I just LOVE the crunchy, chewy texture and nutty taste that the bulgur contributes to the tartare. I get the feeling that I’ll be playing with this union a lot in the future… 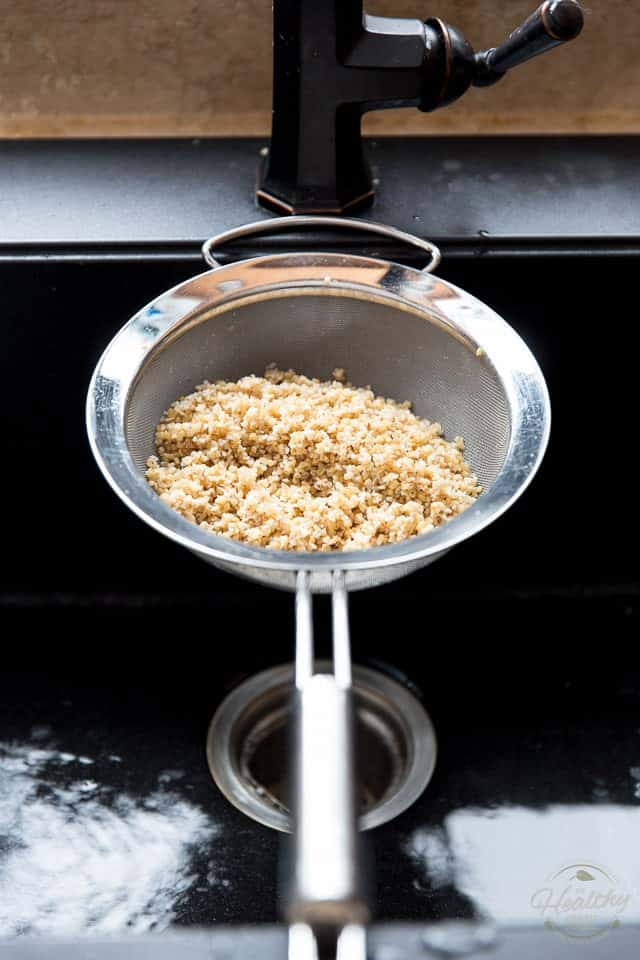 The most important thing in adding the bulgur, I think, is that it needs to be really cold and super well drained, too.

So what you wanna do is, the previous night, place your dry bulgur to soak in plenty of cold water and then let it soak in the fridge overnight. Then, be sure to drain it really well before you use it. You might even want to press on it a little, to be sure to remove as much water as you possibly can. 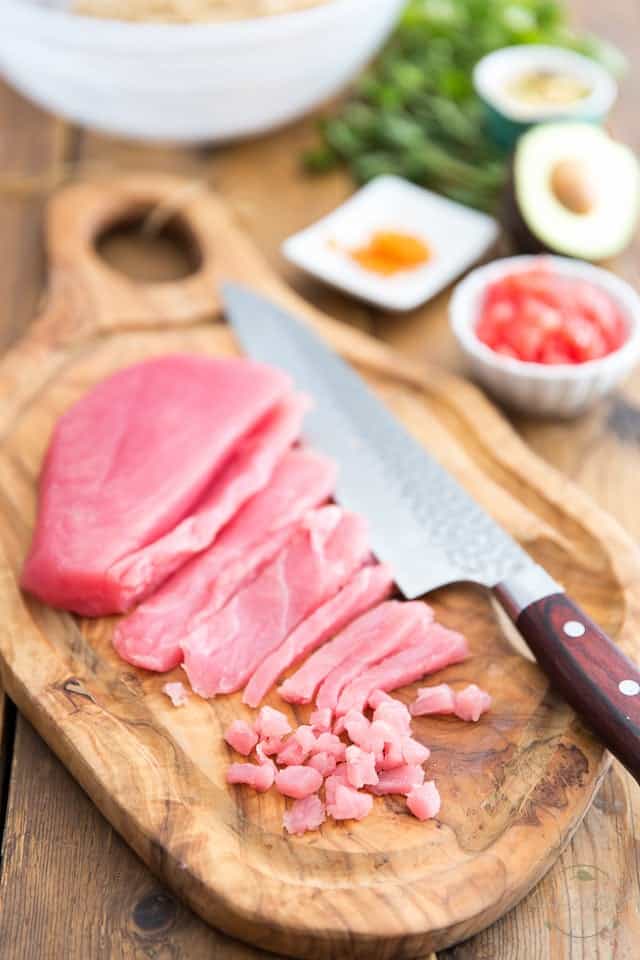 While that bulgur is draining, grab a sharp knife and cut your tuna into really small cubes of approximately 1/4″

Note that I used Yellow Fin Tuna, but any kind of tuna would work just as good. Again, just be sure that you pat it good and dry to avoid adding excess water to the tartare. 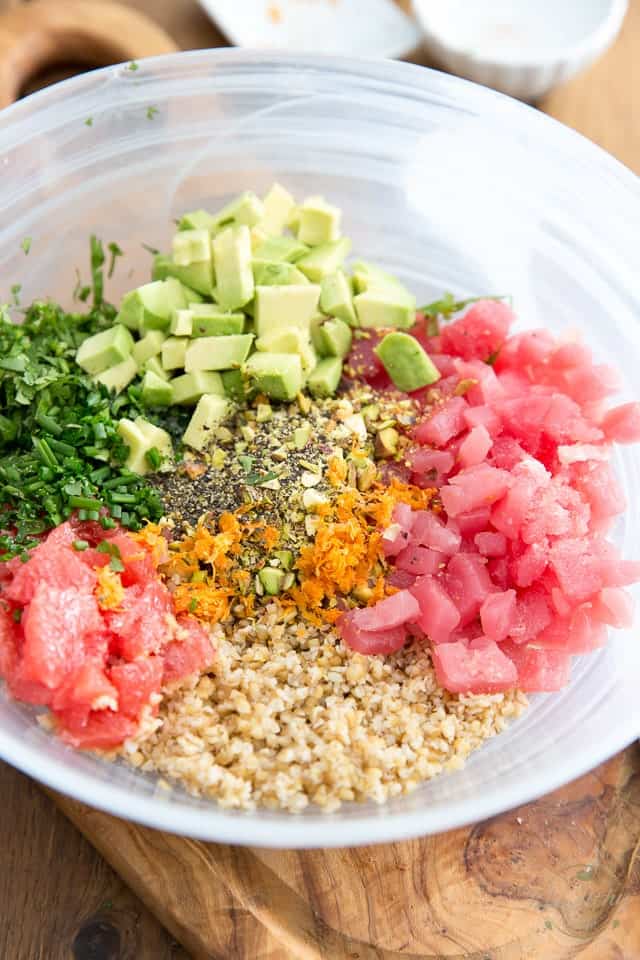 Next, place your bulgur, tuna, as well as all the other ingredients in a large mixing bowl…

For the grapefruit, it’s really important that you only use the flesh and discard the pith and membrane, a technique that’s known as supreming. If you need help with that, see my Shrimp Avocado and Grapefruit Salad post for detailed visuals and instructions. 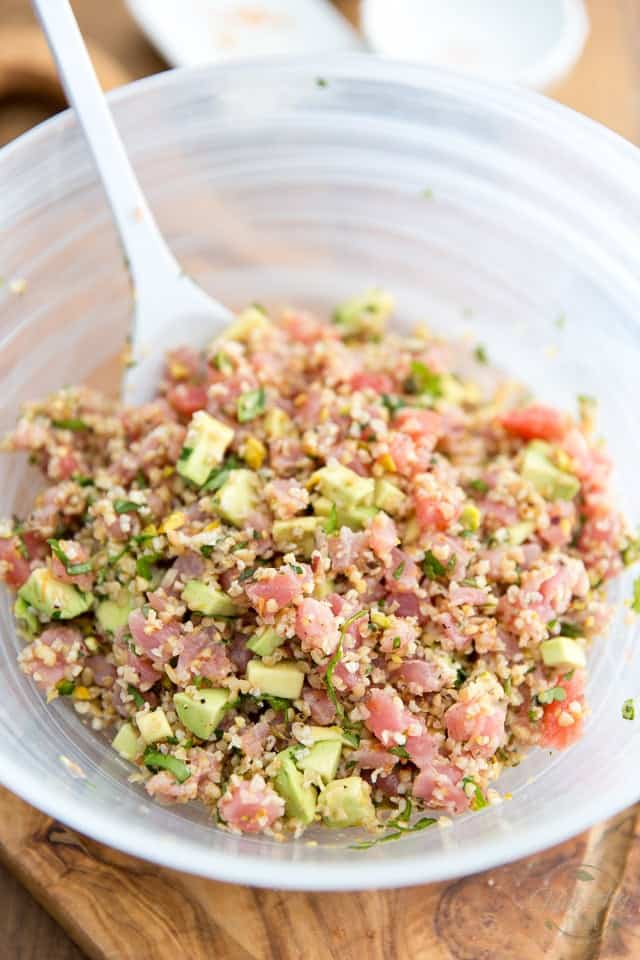 Delicately stir all your ingredients until they are well combined… Now would also be a good time to taste and adjust the seasoning as needed.

Place a 3-3/4″ round cookie cutter directly onto a serving plate and fill it with about half of the tartare mixture, then flatten the top by pressing it down firmly with a spoon or better yet, a flat object.

This will yield 2 fairly large servings that would be very well suited for a light main course. If you preferred to make smaller, appetizer size tartares, feel free to use smaller cookie cutters and divide the mixture in 4, instead. 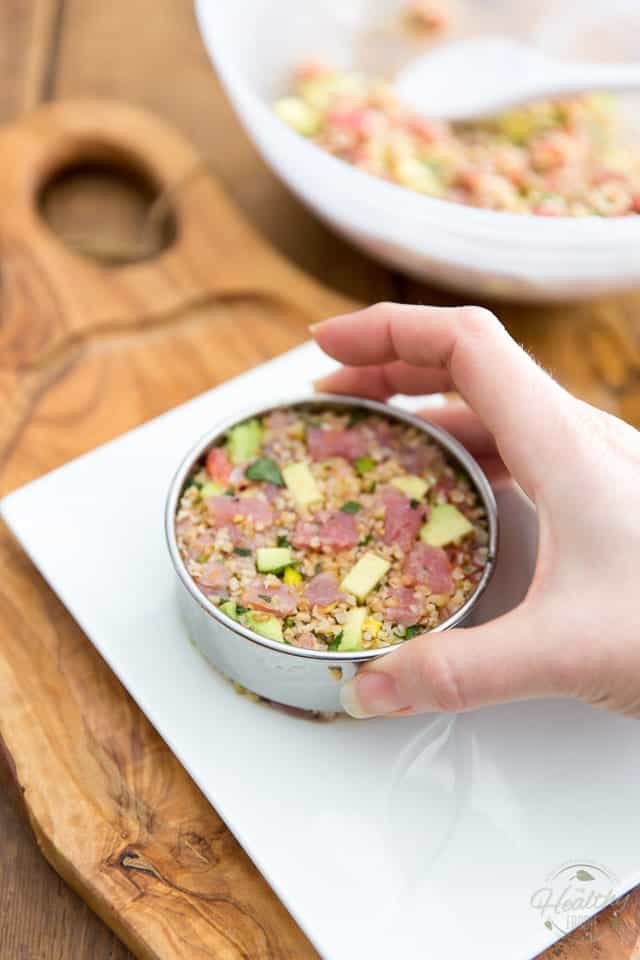 Remove the ring from around the tuna tartare and repeat with the rest of the mixture. You could either serve immediately or cover your tartare loosely with plastic film and chill until ready to serve, no longer than 12 hours. 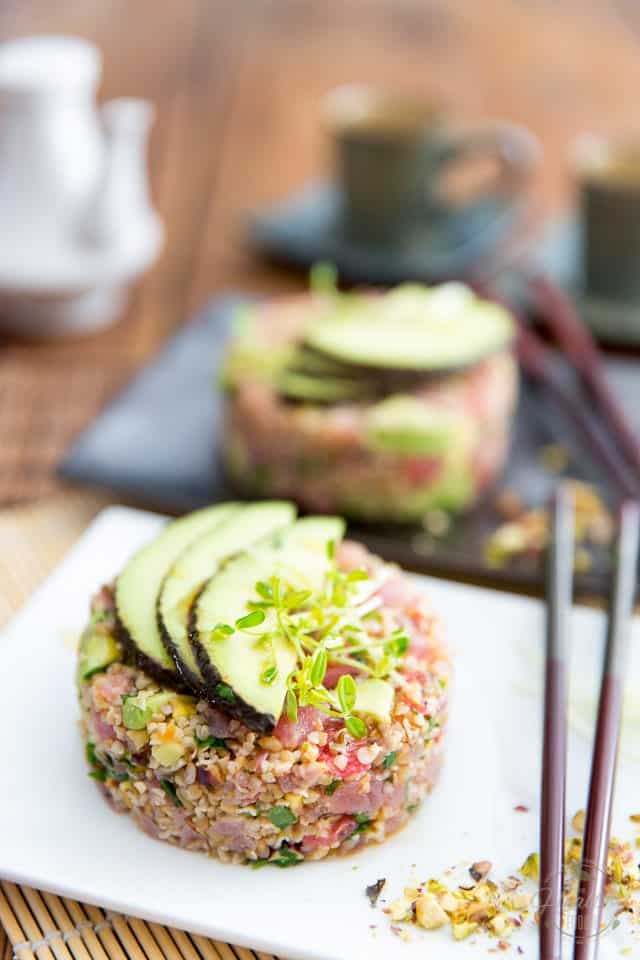 At the moment of serving, garnish your tartare with a few slices of avocado, a pinch of microgreens and a few drops of toasted sesame oil. 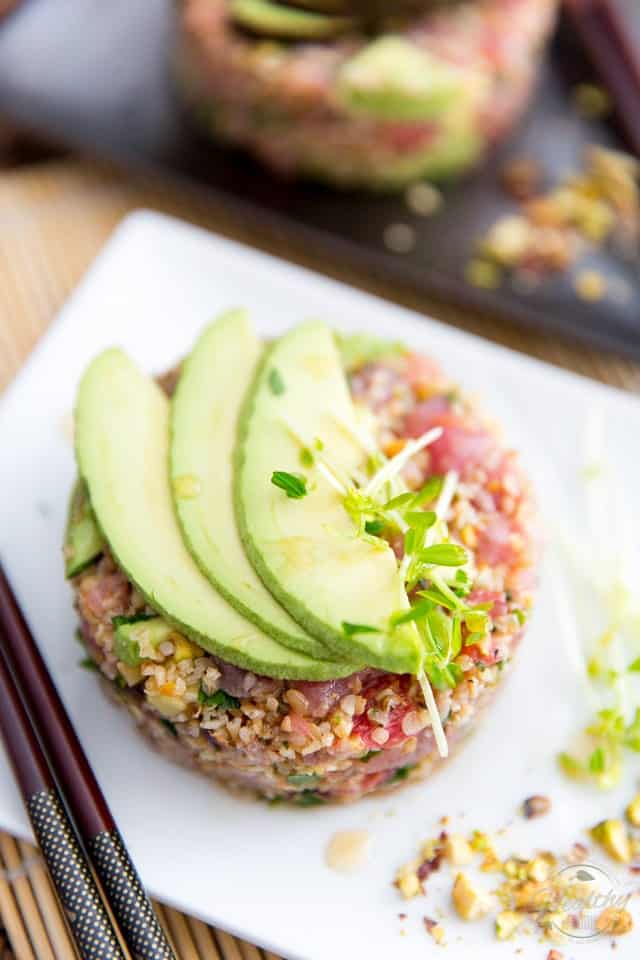 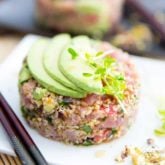 Prep Time: 15 minutes
Total Time: 15 minutes
When it comes to making tartare, your imagination is the limit! This Tuna Bulgur Tartare certainly is a nice twist on this great classic.
Servings: 2

Put the dry bulgur in plenty of cold water and place it in the fridge to soak overnight, then drain it really really well before adding to your tartare mixture.