Comments Off on Another Quinoa Inspiration 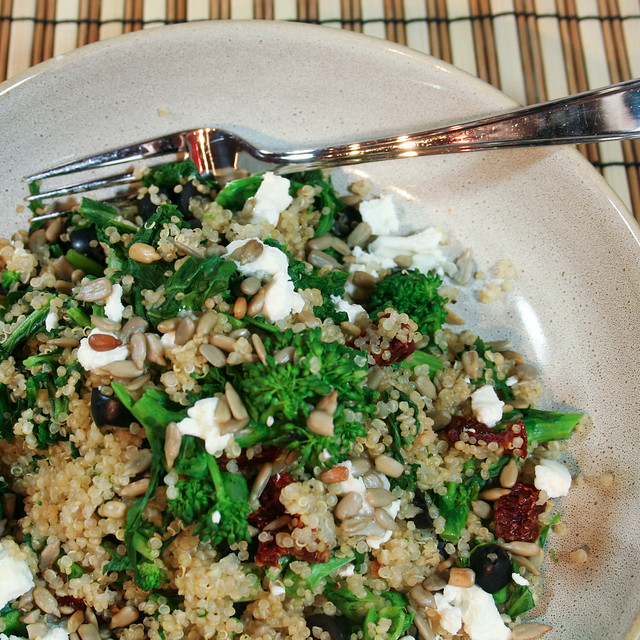 It’s a good thing I was cooking only for myself tonight, for I wouldn’t have made many friends if my kids had been at home. Both of them hate rapini and quinoa and my daughter literally gags on sun dried tomatoes. It’s too bad really because rapini would be one of my favorite vegetables. Probably one of my top 5. Since I’m the only one here who likes it, I don’t get to eat it quite as often as I’d like. Let me tell you, if there’s ever going to be a man in my life, he better like rapini. And quinoa for that matter! In fact, I think tonight’s dish would be a perfect “test meal”. If he didn’t care for it, then I guess things just wouldn’t work out…OK, that might be a little harsh, but still… he would HAVE to love good food. I could never be with someone who was only into junk. So he better like his veggies, and like them A LOT!

Seriously, I think tonight’s quinoa salad was a perfect, and I really mean perfect combination. I simply added barely wilted rapini, sun dried tomatoes and sliced black olives to warm quinoa. Then a generous pinch of pepper went in, gave that a good stir and transferred into a plate. Topped with goat cheese and sunflower seeds. That’s it, that’s all. It didn’t need any extra seasoning and it just literally exploded with taste.  The bitterness of the rapini and sweetness of the sun dried tomatoes went beautifully well with the nuttiness of the quinoa and the tanginess of the goat cheese, while the sunflower seeds added that little bit of extra crunch. As for the black olives, I can’t quite put my finger on it, but they definitely played an important role. I wouldn’t leave them out. Nope, I wouldn’t change a thing. This was one of my favorite quinoa salads ever. Another keeper!

Comments Off on Another Quinoa Inspiration / Leave a Comment »