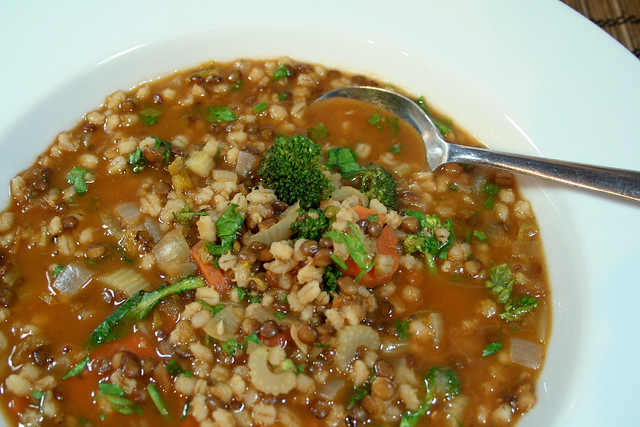 Tonight, I had planned on making this soup. However, I felt extremely lazy today and decided to put off grocery shopping until tomorrow. I thought I would stop on my way back from work instead of making a special trip today. Now I just know that I will regret this tomorrow, but it’s a decision that made me feel very good today, so I guess I will have to deal with the consequences…

Part of said consequences was that I didn’t have all the ingredients that I needed for tonight’s soup, so I had to adapt it a little. Really. I only had to make very small adjustments. For instance, I didn’t have any canned tomatoes. So I used fresh tomatoes and V8 instead. I didn’t have any swiss chards, but I had broccoli. That worked beautifully. Not enough carrots? Not a problem. I added celery.

I think it was a huge success, well, with me anyway. My son had a bite, right out of the pot, grabbed a V8 and left. “I take it you don’t like it” I said. “I had a late lunch” was his answer…

« Previous PostOatmeal with a tropical twist
Next Post » Another Quinoa Inspiration

6 Comments on “Barley and Lentil Soup”