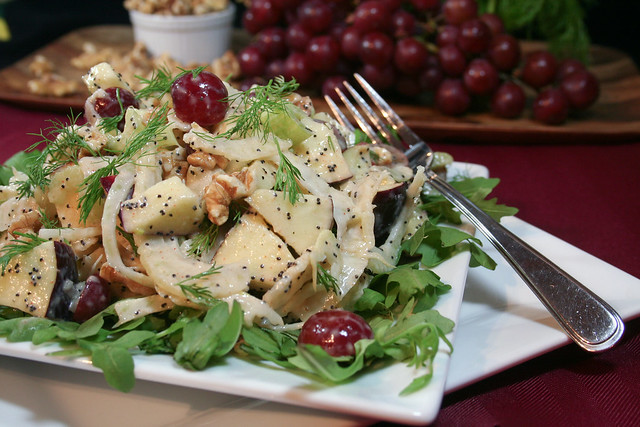 Sometimes, I love to sit down and read cook books… well, watch, more than read! I just love cookbooks. They are such a great source of inspiration. I wish I had hundreds. But then again, if I had that many, I wouldn’t have time to go through all of them and try those recipes that inspire me. Some of them I really want to try so I tag them with little colored post-its. Tonight’s salad was one of them. However, I had to wait until I was alone to try it because no one here would’ve cared to eat it, really. My daughter doesn’t like fennel or celery and my son hates fruits and/or nuts in salads.

Well, guess what? Tonight, I was alone and I jumped at the occasion! I don’t regret it one bit. This salad is simply as yummy as it looks. Fresh, crunchy and sweet, yet tangy, it feels just like summer but looks just like Christmas, with all its greens and its reds. With such beautiful colors, it’s just as nice to look at as it is to eat… if you love fruits and nuts in your salad, and if you happen to like fennel and celery, that is! 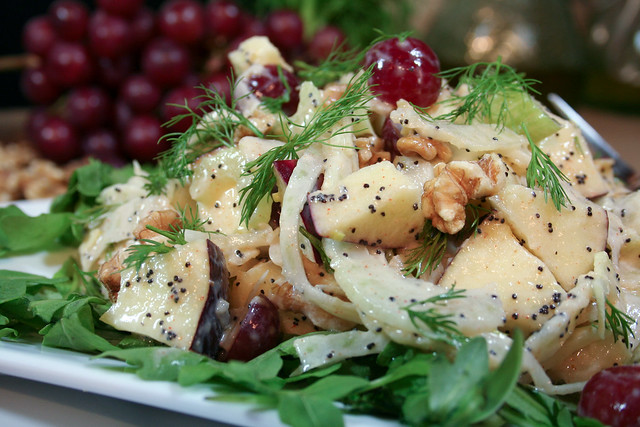 I will definitely be having that one again, probably sooner than later! I think I might even consider taking that one for lunch at work. The apples might oxidize a bit, but I don’t think it would make it any less good. And it would sure change from my usual mixed greens and veggies with cottage cheese. Yep. I might very well do that. Darn. I should’ve made a full recipe instead of cutting it in half. Then I would have some leftover for tomorrow. Oh well, guess I’ll have to wait until next week: I’m all out of fennel. I shouldn’t have mixed it in with my greens.