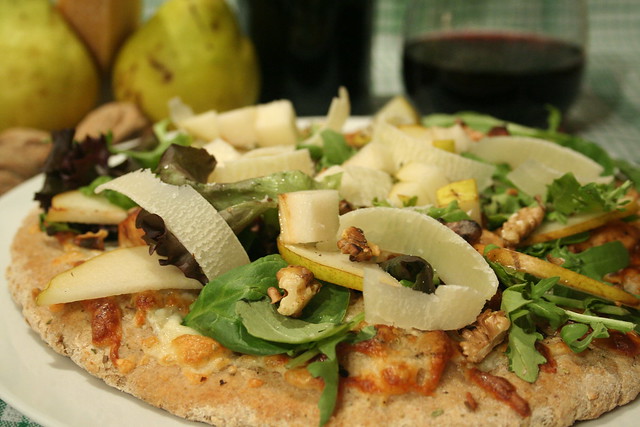 Tonight was another pizza night. Again, I had my mom over for supper and my son, his girlfriend and my daughter. Believe it or not, we each had a different pizza! Mine was a little different, it was more like a salad on a crust, but I really liked it. I started by brushing the dough with a little bit of olive oil, sprinkled some salt, pepper and oregano, topped with low fat mozzarella and added a few cubes of pre-cooked chicken then tossed it in the oven. When it came out, I topped with mixed greens, arugula, walnuts, pears and parmesan shavings, then drizzled a tiny little bit of balsamic vinegar. Definitely one that I would eat again. 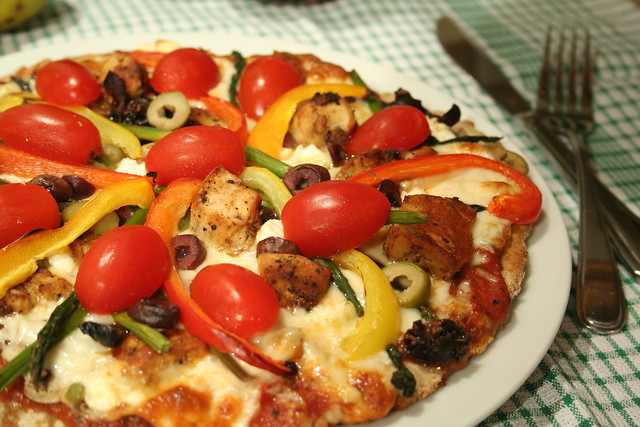 My mom’s was so loaded with all sorts of things, I can’t even remember what went on it. First, tomato sauce, then mushrooms, chicken, olives (green and black) asparagus, sun dried tomatoes, bell peppers, fresh tomatoes and goat cheese. I think that’s it. She said it was absolutely delicious and seemed to enjoy it very much, even though, for some strange reason, she removed all the chicken and kept it for last… Oh, it’s a digestion thing. Apparenlty, chicken is easier to digest if you eat it at the very end of your meal. Live and learn! :o)

My daughter opted for smoked salmon and she made the mistake of putting the fish on the pizza before to put it in the oven. Cooked smoked salmon, apparently, isn’t very good! Not very picture worthy either!

Comments Off on Chicken Pear Walnut Pizza / Leave a Comment »