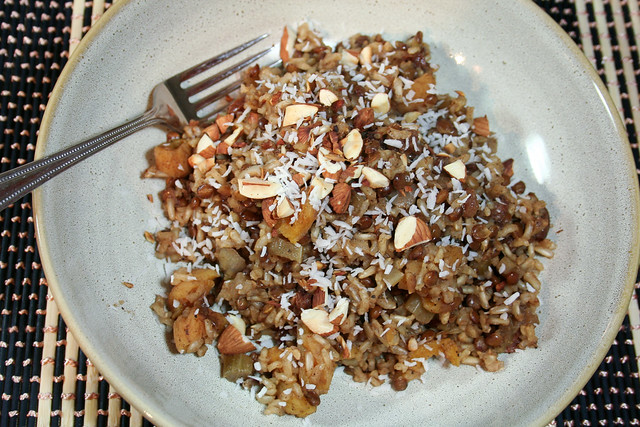 Lately, I’ve been having major cravings for anything cinnamon. Don’t ask me why, I have no idea. I often get really strong cravings like that. Funny thing is, for years, I didn’t really care for cinnamon at all. I would barely even add any to apple desserts that I would make, and god only knows that apples and cinnamon are a match made in heaven, especially in desserts! For some strange reason, it seems I now want to add cinnamon to just about anything. I find myself sprinkling the stuff on my cottage cheese, which I eat every day with various fruits… also sprinkled with cinnamon.

I wasn’t really surprised when this idea for a lentil and dried fruits, cinnamon flavored rice suddenly popped in my head. Having never really cooked with those kinds of flavours before, I didn’t really know what to expect. Plus, making this kind of a dish for one added to the complexity. I needed to find a way to make it simple, so I decided to just throw everything in the same pot and cook it like I would rice alone.

Well… I think it was a success. Although it took way longer to cook than I had initially expected, and also required twice as much water, the final result was extremely satisfying. The rice still had a little crunch to it, the lentils weren’t mushy (I was afraid this might happen), the dried fruits were still very much present with a lovely soft texture. I think adding the almonds at the end was a good decision for it added a little extra crunch and nuttiness that worked well with the dish. As for the cinnamon flavor, it was just right, if you ask me. Here’s another recipe to which I wouldn’t change a thing, except maybe, sprinkle a little bit more coconut next time. 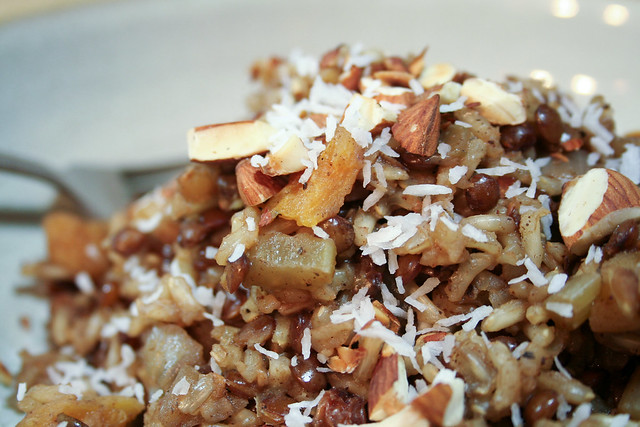