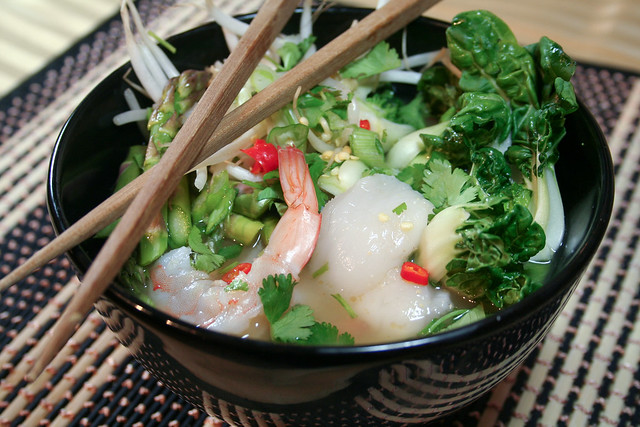 I finally went and bought some Soba noodles. I ended up spending $37. I told you there was no way I could set foot in that Asian market without spending tons of money. To my defense, I had the best of intentions this time. I didn’t even grab a cart when I got in. I was going to get the noodles and that’s it. But then, I spotted those cute little mini bokchoys. Sooooo cute. Only a dollar for the bag. I just had to get them. Then I headed straight for the Soba noodles. $2.49. Great. Now, let’s go! But wait… I wonder if perhaps they have brown rice noodles. Might as well have a look, since I’m here. Nah, no luck, but those are interesting: sweet potato noodles. OK, I have to get them. I’m too curious. Oh, and might as well get some rice sticks, since I’m here. Then I saw some flat leaf parsley, dill and coriander (god I HATE that stuff, it’s now official… more on that later) going for a dollar a bunch. Get one of each. Oh, and I was running low on green tea… well, you get the idea. It didn’t take long before my hands couldn’t handle it anymore and I had to get a cart after all.

So tonight, I tried those noodles for the first time. I liked! I decided to try them in the easiest possible way, in a soup. All I did is cook them quickly in some boiling water, transferred them to a bowl, then added 4 shrimps to the boiling water, left them in for about 30 seconds then transferred them to the bowl with the noodles. I discarded that water and started boiling a fresh pot.

While that was happening, I  added 4 raw scallops, sliced in half, to the noodles and shrimp. Then, in went a handful of bean sprouts, 3 chopped asparagus, 4 of the super cute baby bok choys cut in half, one green onion, sliced, a handful cilantro (big mistake) oh, and a thai pepper, thinly sliced. Wow those are tiny, but potent little things! When the water started boiling, I diluted a tablespoon of miso, mixed it in and then poured this in the bowl over all the yummy ingredients that had been patiently waiting. I added a few drops of sesame oil and that was it, soup was ready to be enjoyed. 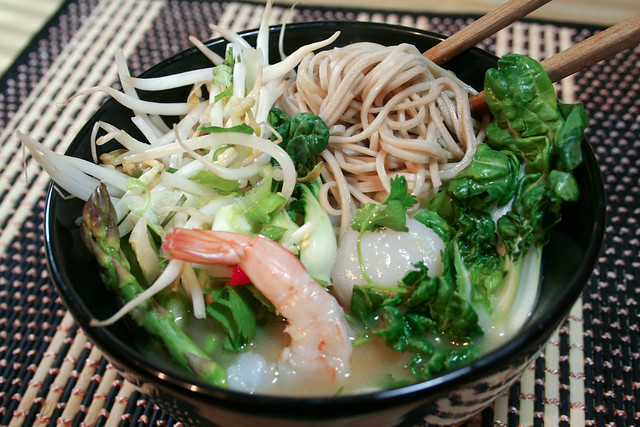 Looks good, doesn’t it? Well, it was… sort of. I just wish I hadn’t decided to fight with my brains over that stupid cilantro issue. I’ve never liked cilantro but recently go it in my mind that I would try to like it, that I would make every honest effort to let that herb grow on me. So every time I went grocery shopping, I grabbed one leaf from a bunch and ate it. While I never was able to say it was good, I THOUGHT that I didn’t hate it as much as I used to and was ready to enjoy it in a dish. Boy was I wrong! I hate the stuff so much, it almost makes me gag. Literally. Need I say it nearly ruined my beautiful soup for me? I ended up having to chuck a good part of it. So that’s it. Never again. Cilantro and I are officially through.

Anyone need a bunch? I’ll mail for free! ;o)