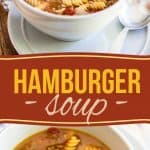 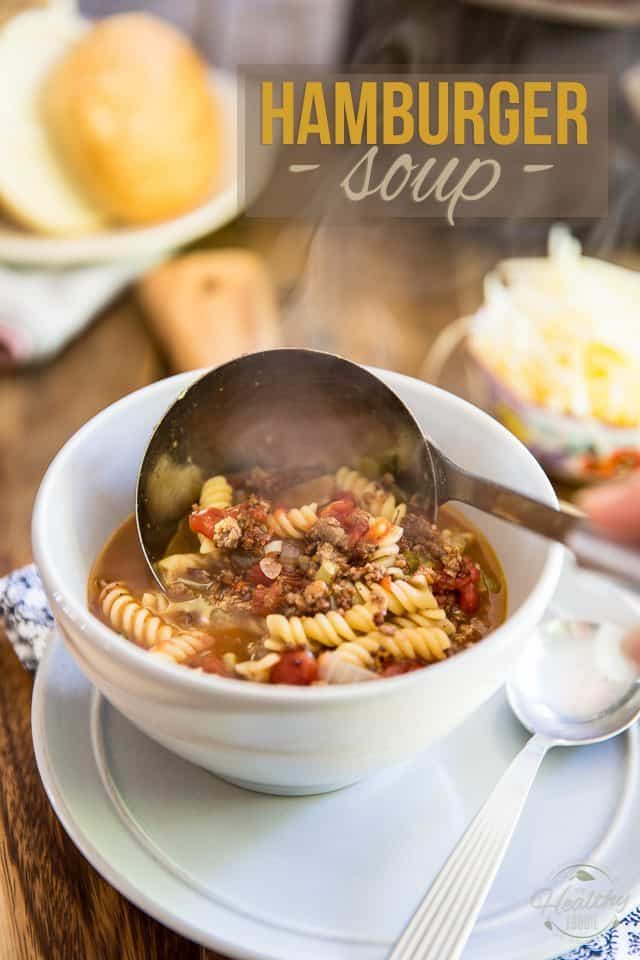 This Hamburger Soup would be my baby grand-daughter’s favorite meal of the moment. She totally jumps for joy whenever her mom makes it for her!

Now that’s a good thing, you know, because the little one’s not really big on meat. However, she happens to LOVE pasta (I mean really, what kid doesn’t?) and also has a major thing for dill pickles, so this soup is a great way to slip a decent amount of meat into her diet.

Yes, you read that right. This soup actually has dill pickles IN IT.

I know, you’re probably thinking “Ewww… how weird! Pickles? In a soup?” trust me, it totally works. I thought the exact same thing when my daughter first mentioned that soup to me. I was also very curious so I had to try it for myself (although me being me, I had to make all kinds of modifications to the original) and all I can say is WOW! My daughter was totally right when she said that this soup, it was all the goody good goodness of a juicy hamburger combined with the the soul warming feeling of a big comforting bowl of soup, all rolled into one! 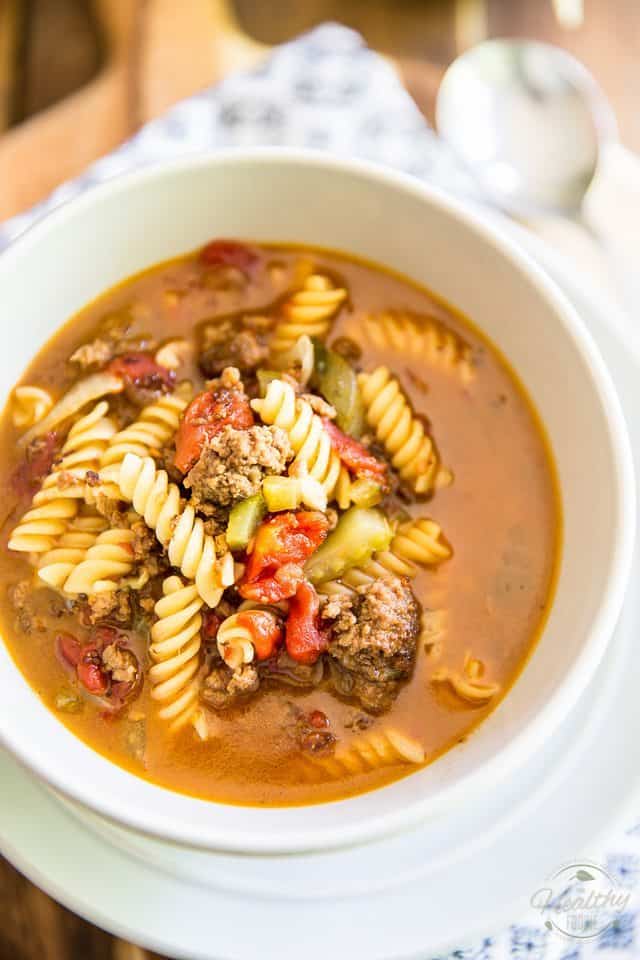 Honestly, it would’ve never occurred to me to add ground beef to a soup either, but I’m super glad I got introduced to that concept. Surprisingly, it really is delicious!

I think that this is now my favorite soup, too. And I look forward to many, many more bowls to come!

Good thing soup season is just around the corner… 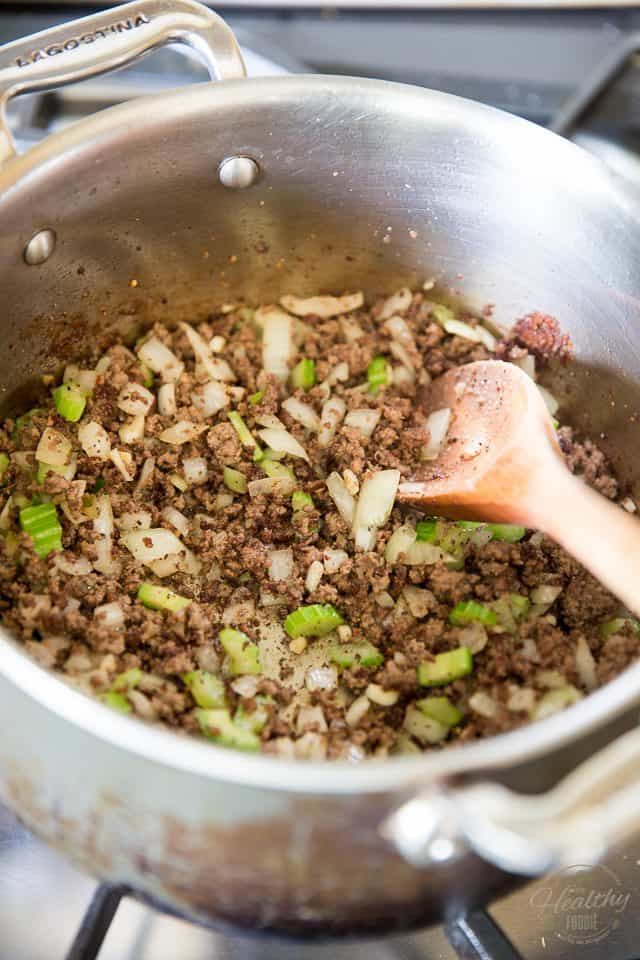 To make it, start by melting some ghee (or other cooking fat of your choice) in a large stockpot set over medium-high heat. Once hot, add the ground beef and cook, stirring from time to time, until the meat nice and brown – about 7 or 8 minutes. Make sure that you give that meat ample time to brown and crisp up — that’s the key to getting tons of flavor!

Next, throw in the chopped onion, celery, garlic and spices and cook until slightly softened and fragrant, about 2 minutes.

You’ll probably notice that there is no salt in the list of ingredients. That’s NOT a mistake. The pickles themselves already provide PLENTY of saltiness, so there’s really no need to add more. You could always add more when your soup is ready, if you feel it’s not quite salty enough, but do wait until the very end, once you know for a fact that the pickles are done releasing their salt! 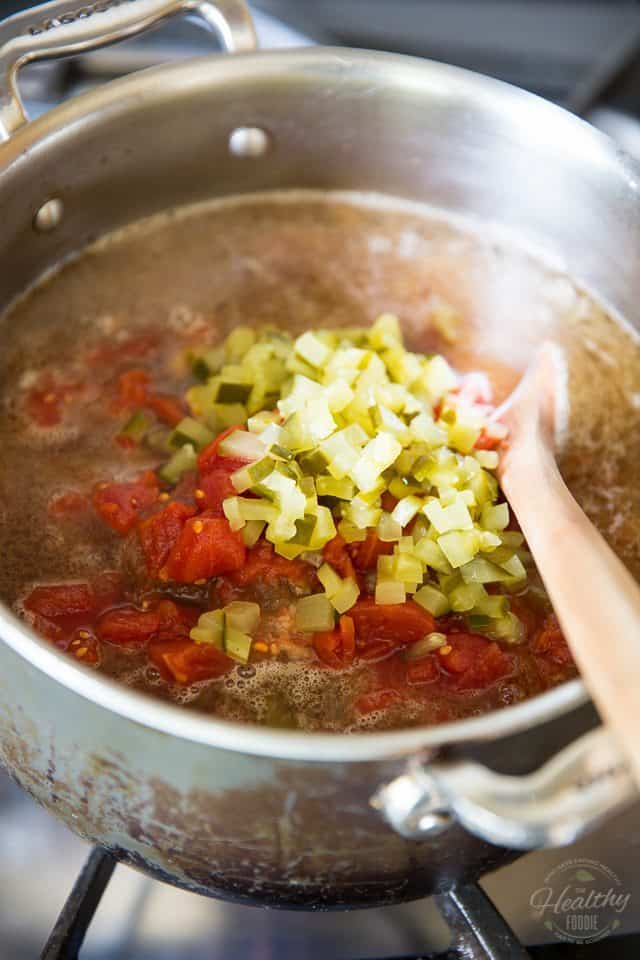 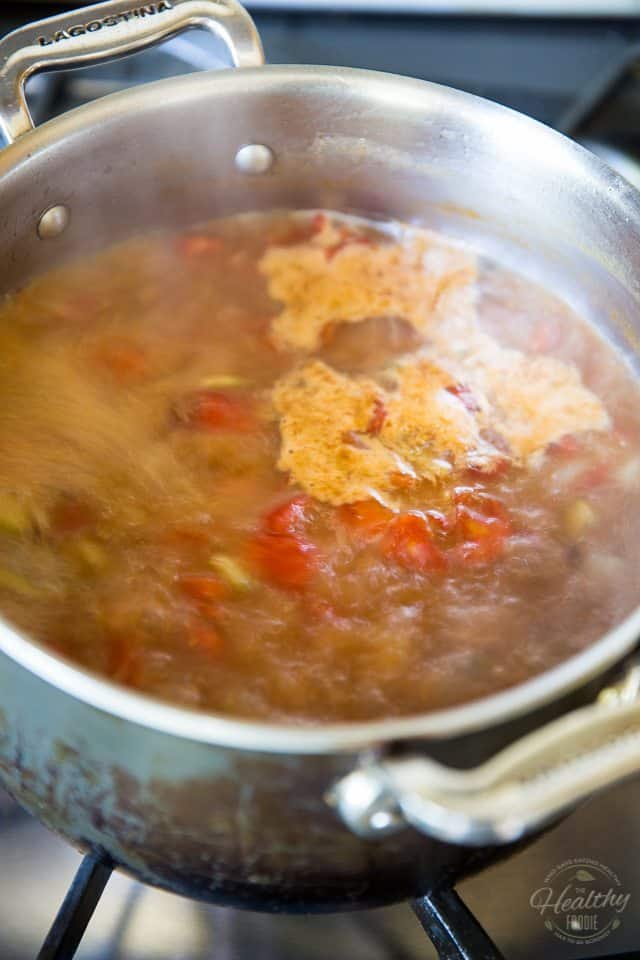 Bring your soup to the boil and cook it on a low boil for 15 minutes.

At one point, you’ll probably see a small amount of foam accumulate at the surface of your soup. If that bothers you, feel free to scoop it out, but honestly, it’s not even worth the effort: it’ll eventually disappear on its own. 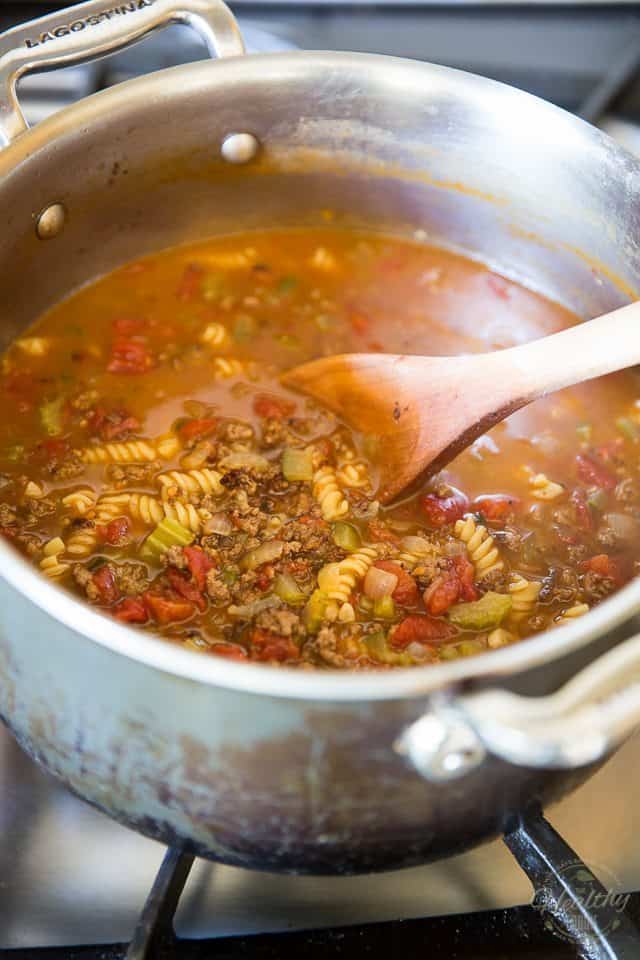 After 15 minutes, add the pasta and continue cooking until the pasta is tender, about 8 minutes.

Note that I chose to use Fusilli, but you can use any pasta of your choice. My daughter, she likes to use alphabet noodles or the tiny little rings — those are so much fun for kids!

And if you preferred to stay away from pasta, I suspect that rice would make for a fantastic replacement! 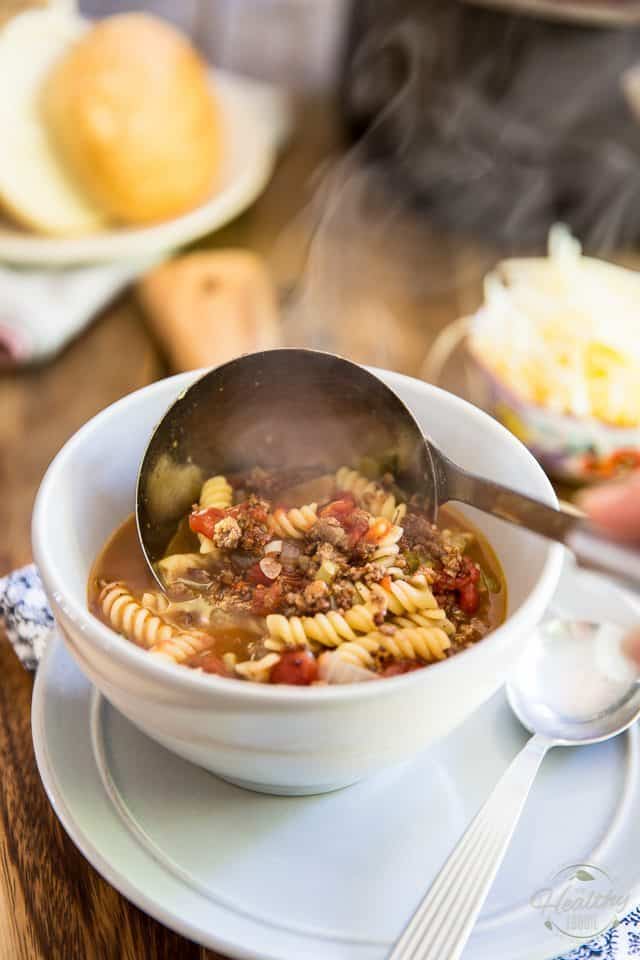 Once the pasta (or rice) is cooked to your liking, your soup is ready to be served! 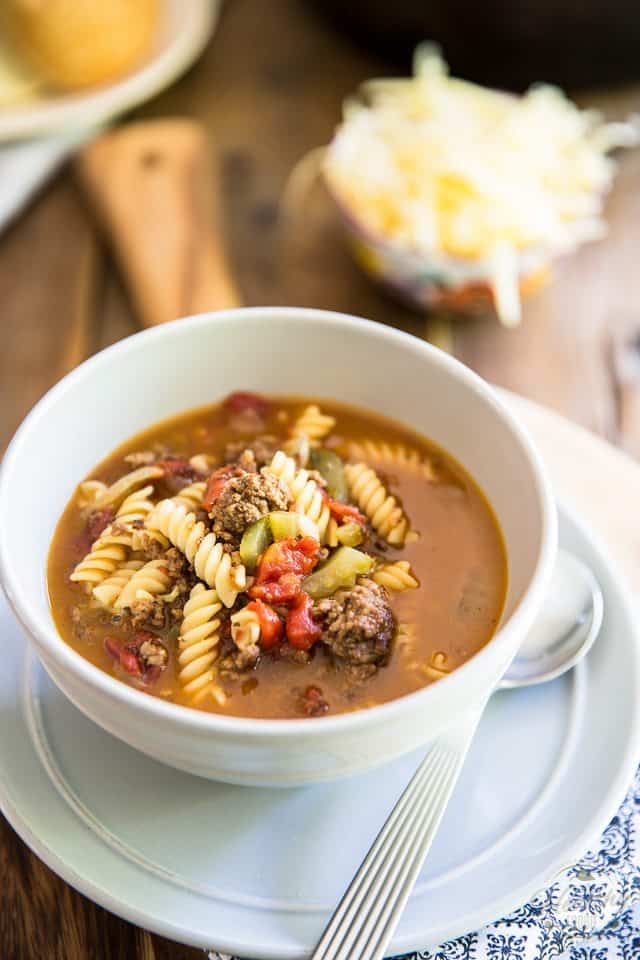 For the record, this soup can be reheated but is much better eaten fresh out of the pot. Like all soups that contain pasta, if it’s allowed to sit for too long, the pasta will soak up all the liquid that it can, leaving you with a dish that’s more like Hamburger Helper, only a much healthier version of it (and probably much tastier, too!) Still very yummy, if you ask me…

Of course, you could always add a little more water to your soup as you reheated it, to get it back to its former liquid state; This thing has so much flavor, it won’t affect it all that much. 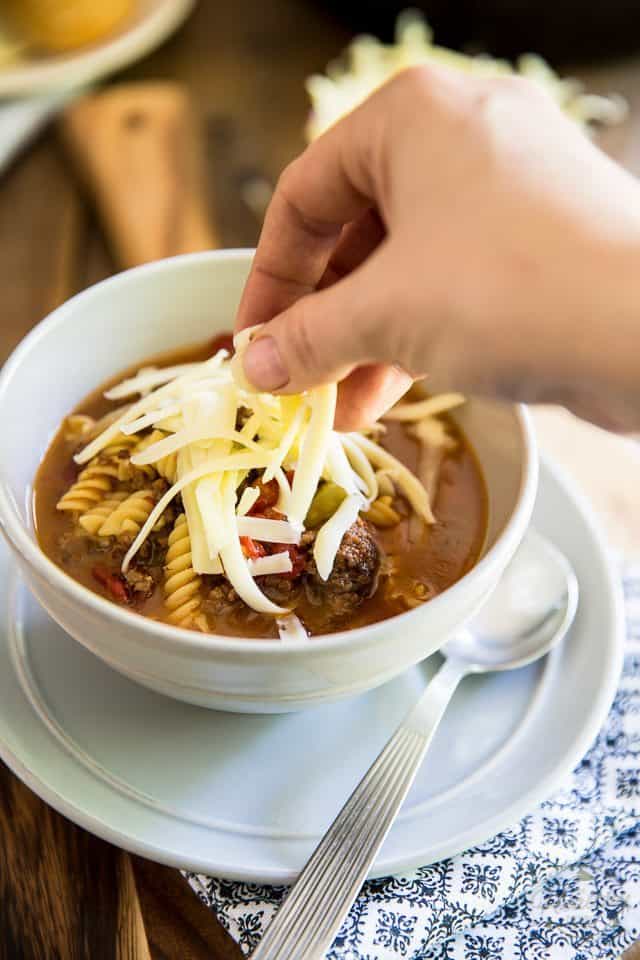 You could also magically and very easily turn your Hamburger Soup into a Cheeseburger Soup by garnishing it with a pinch of grated cheese, if desired.

I used sharp cheddar, but any kind of cheese would work, really! 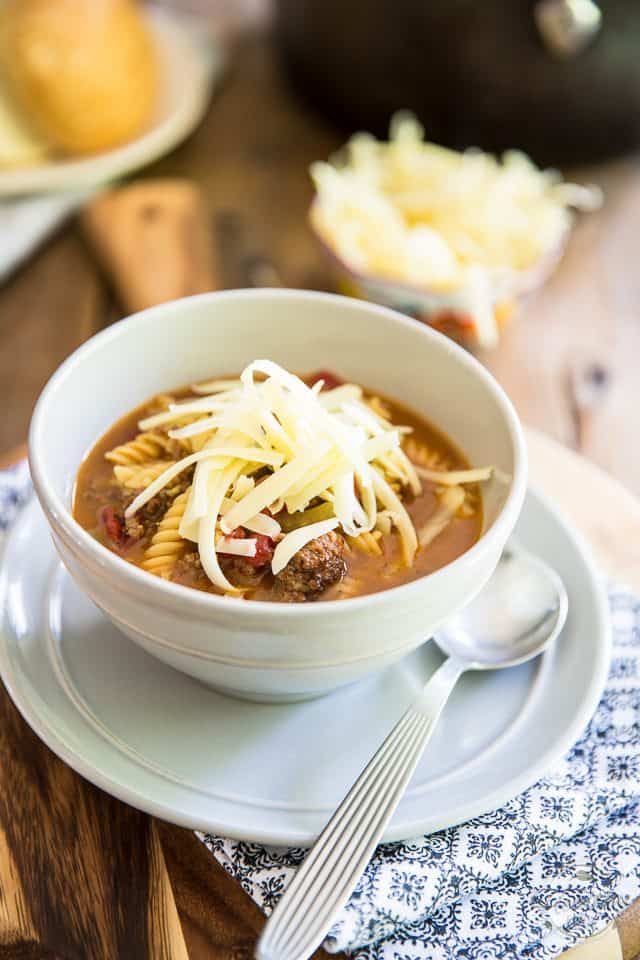 And now, there’s only one thing left to do: sit yourself down and get ready to fall in love! 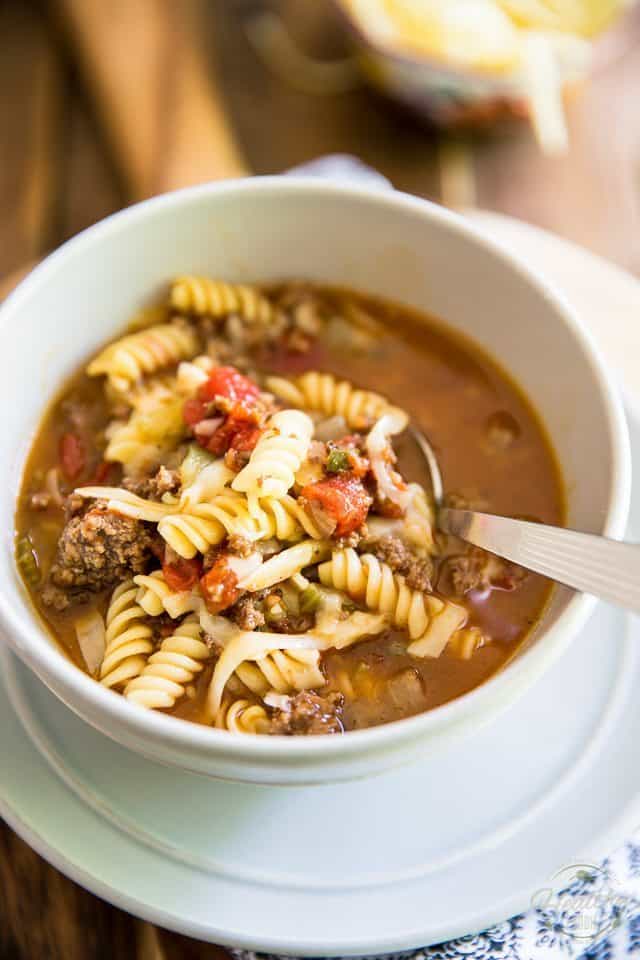 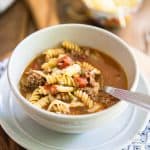 Prep Time: 5 minutes
Cook Time: 35 minutes
Total Time: 40 minutes
Hamburger soup: it's the goodness of a juicy hamburger and the warmth of a big comforting bowl of soup, all rolled into one!
Servings: 4

posted by Sonia! The Healthy Foodie on September 20, 2016 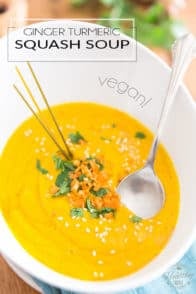 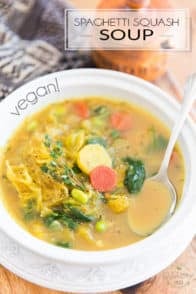 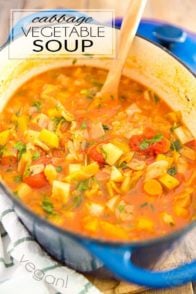