Cakes don’t get much healthier than this Buckwheat Apple Ring Cake. On top of being completely vegan, it also happens to be free of gluten and refined sugar. Of course, it’s also absolutely delicious! 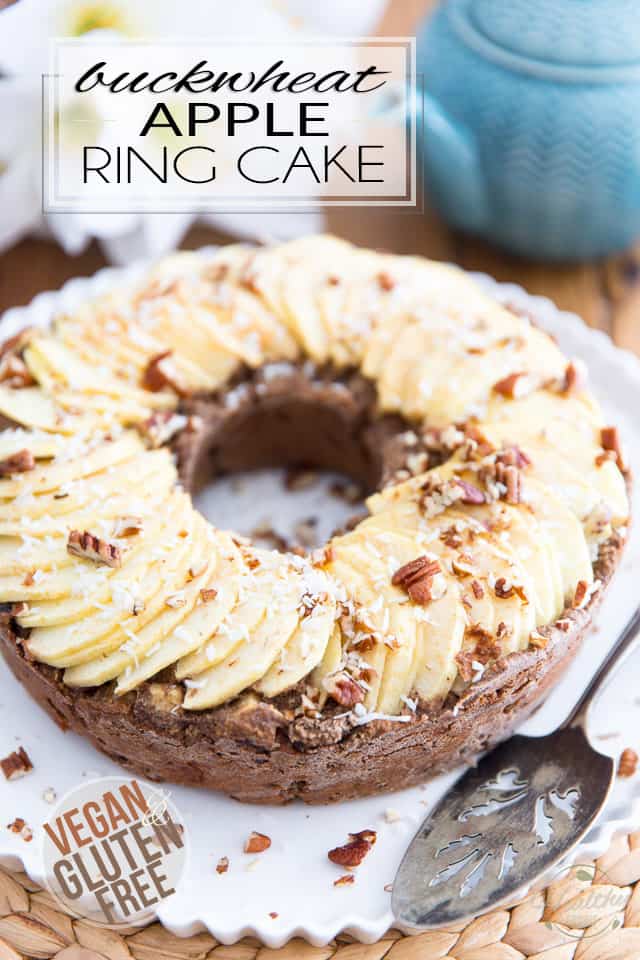 This Buckwheat Apple Ring Cake I originally created ages ago, in March of 2012 to be exact, after a friend had challenged me to “heatlthify” an apple cake recipe he’d found on the Internet.

I’d readily accepted his challenge and practically reinvented the thing… Not only did I manage to keep it vegan, like the original, but also made it gluten and refined sugar free. Indeed, the only ingredients in charge of bringing sweetness to this gorgeous ring cake are apples and raisins. Yet, it tastes plenty sweet to be enjoyed as dessert!

HA! I’m telling you, cakes don’t get much healthier than this one. Especially not cakes that taste this good! This one has a really dense yet surprisingly moist texture, and offers very pleasant and distinct notes of buckwheat, which remind me of my childhood’s breakfasts, when my dad used to make buckwheat pancakes for us. Paired with apples, it’s like a match made in heaven!

Oddly, though, since I’ve originally created that cake, many people have reported in the comments that the recipe didn’t work for them. I felt the need to retest it for myself, without changing a thing to the recipe. This is exactly what I did here, and it came out just as perfect, if not better than the first time.

At least now I’m reassured, and as a bonus, you get to have step-by-step pictures, which I didn’t do back in the days. 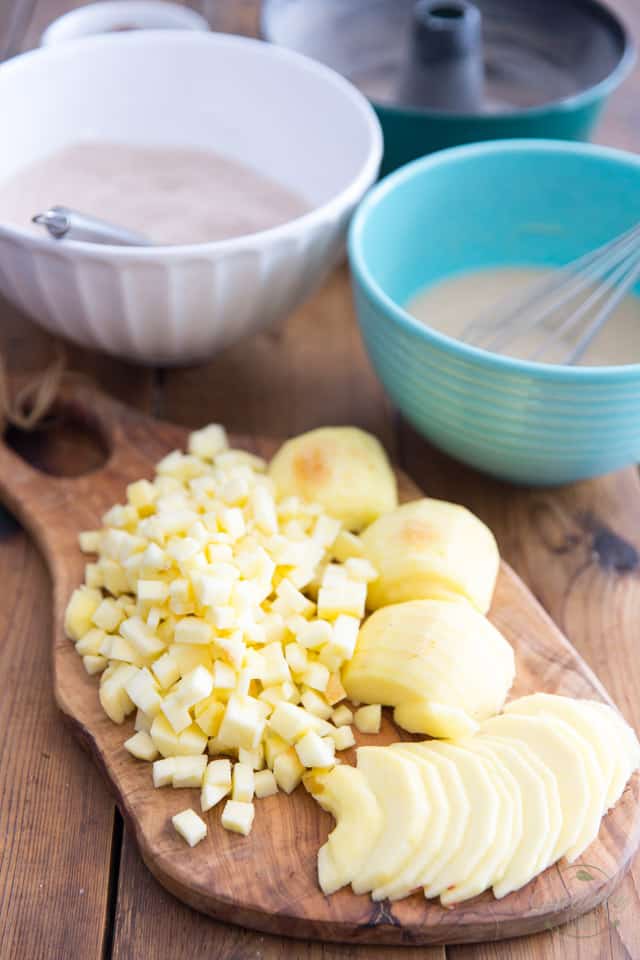 When baking, it’s always best to start with a good mise-en-place, which means prep, measure and weigh all your ingredients before you start cooking or baking.

Your first step should be to preheat your oven to 350°F, then grease and flour a 9″ tube pan; you could use any flour you like to do that, but I strongly suggest that you use buckwheat flour in order to keep your cake gluten free.

Then, peel and core 4 baking apples  — I used gala but feel free to use your personal favorite — cut them in half and then cut 2 of them into tiny little cubes and slice the other 2 as thinly as you can.

Next, grab a large mixing bowl and in it, combine the dry ingredients and whisk until fully incorporated. We’re talking:

While you’re at it, might as well measure your chopped pecans and raisins; you’ll need 1/2 cup of each. 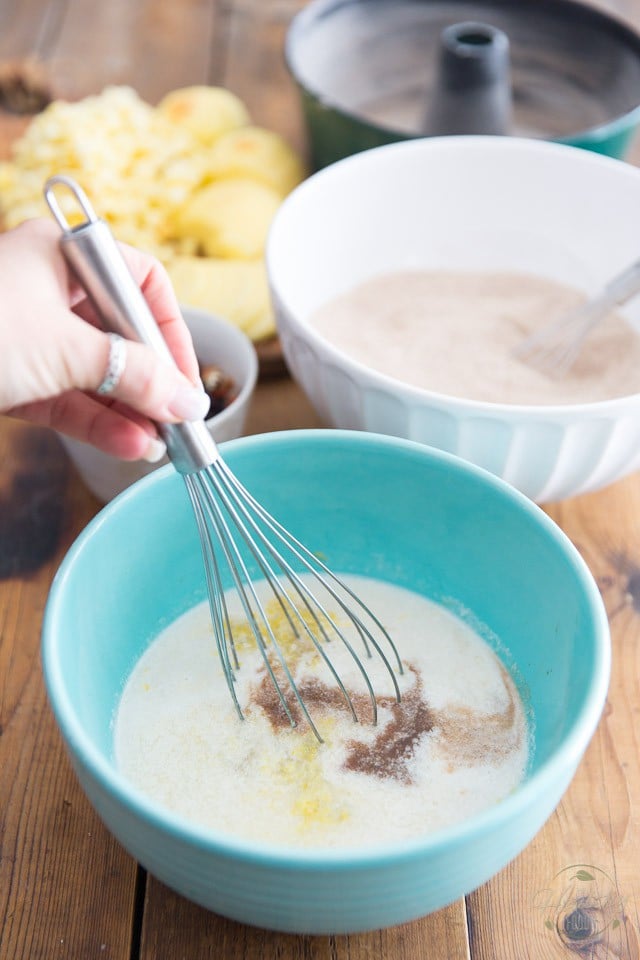 Grab another mixing bowl and this time, combine the wet ingredients and whisk vigorously to combine. We’re looking at: 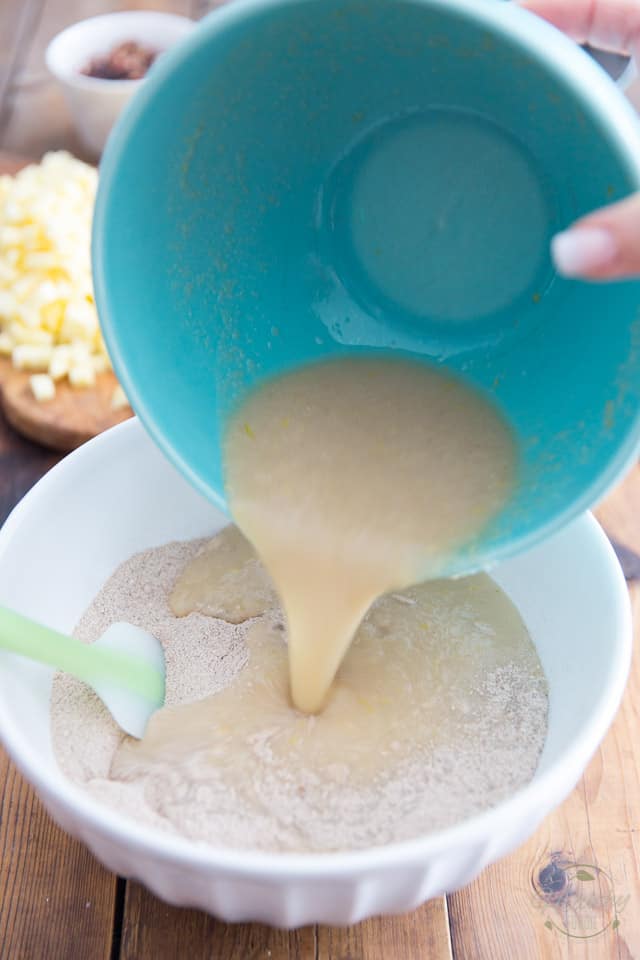 Alright now we’re all good and ready to go! Pour the wet ingredients right over the dry…

… and mix delicately with a wooden spoon or rubber spatula until just incorporated. 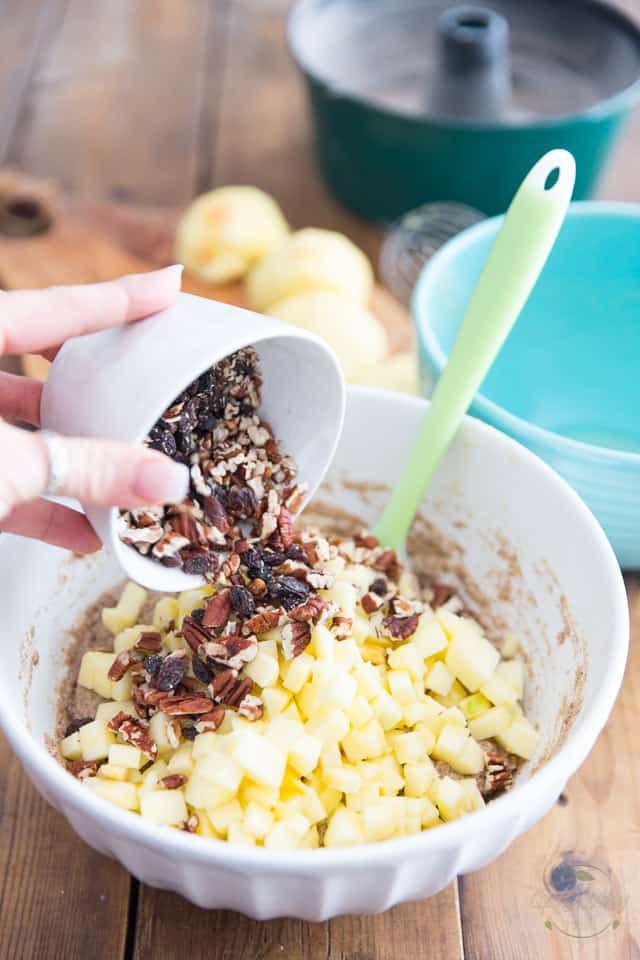 Throw in the cubed apples, as well as the raisins and chopped pecans, and fold them in delicately. 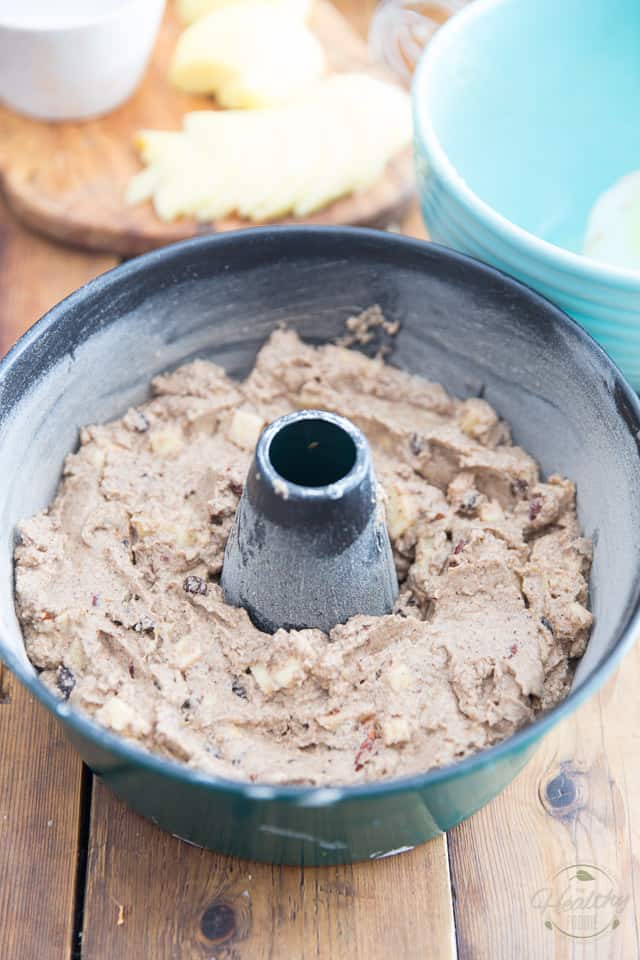 Transfer the batter into the prepared ring pan and spread it as evenly as you can. 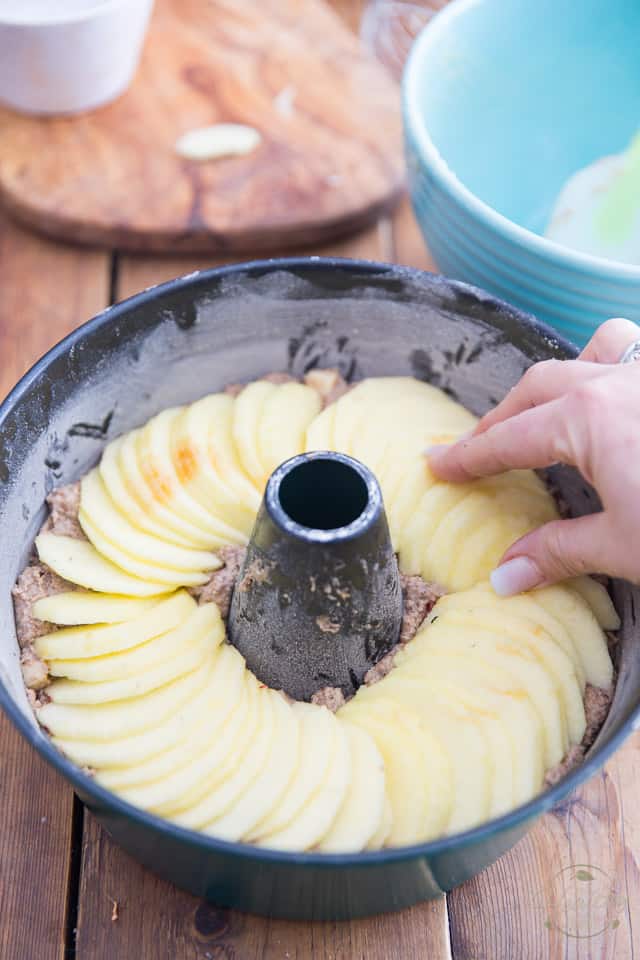 Finally, arrange the apple slices around the cake, pushing them lightly into the batter.

Time to bake that cake! Place it on the middle rack for 40-45 minutes, or until a toothpick inserted into the cake comes out clean.

Of course, the apples will have softened some, but they won’t have taken much coloration; just a slight little touch of golden brown… 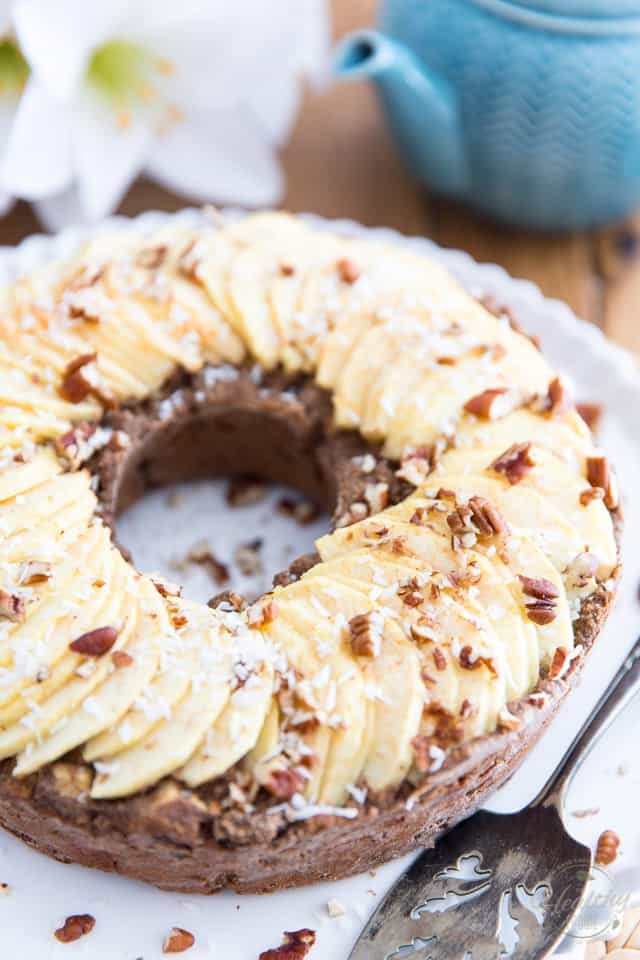 Once it’s out of the oven, you’ll want to let your cake cool in the pan for 5-10 minutes, and then take it out of that pan. 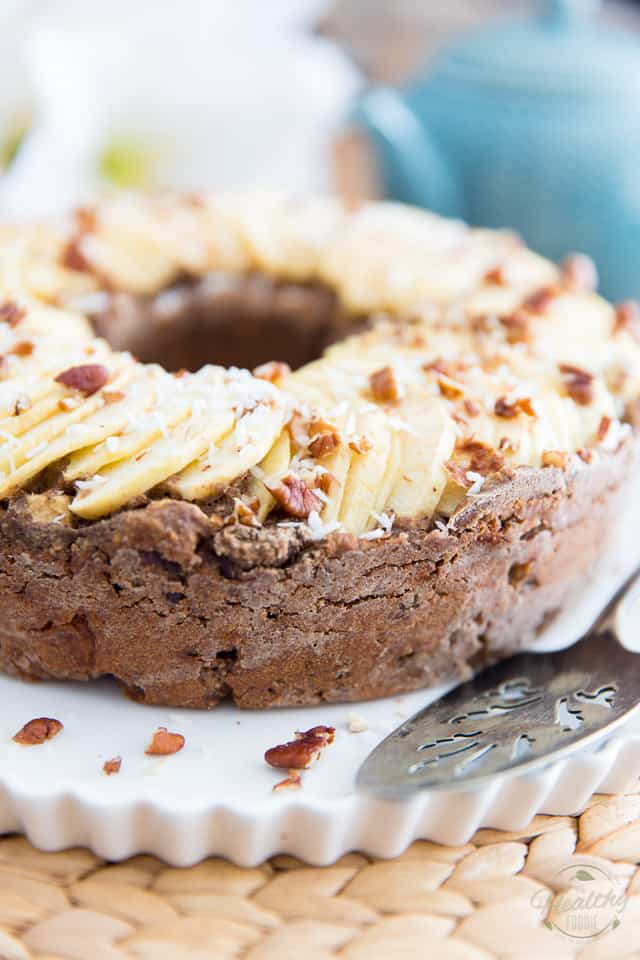 Now sprinkle the top of your cake with a little bit more chopped pecans and a pinch of shredded unsweetened coconut, if desired.

This cake is equally good served warm or cold, so ultimately, the choice is yours! Leftovers should be kept in the fridge, though, seeing as how it contains no sugar to help preserve it at room temperature. 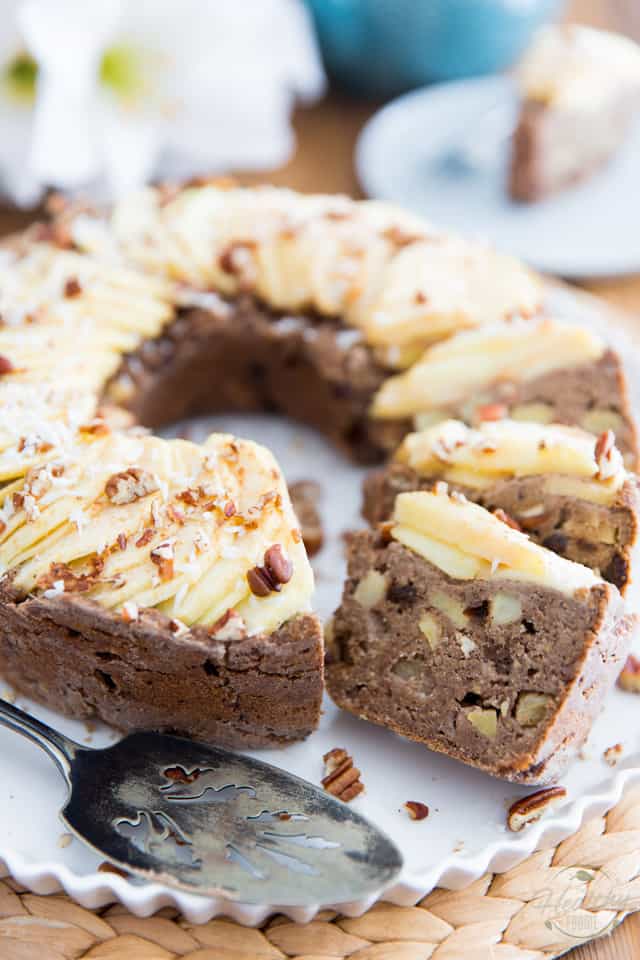 When ready, slice your cake up, and serve!

If you feel like indulging a little, or are in need a little more sweetness, drizzle a little bit of pure maple syrup on top; it goes perfectly well with it! 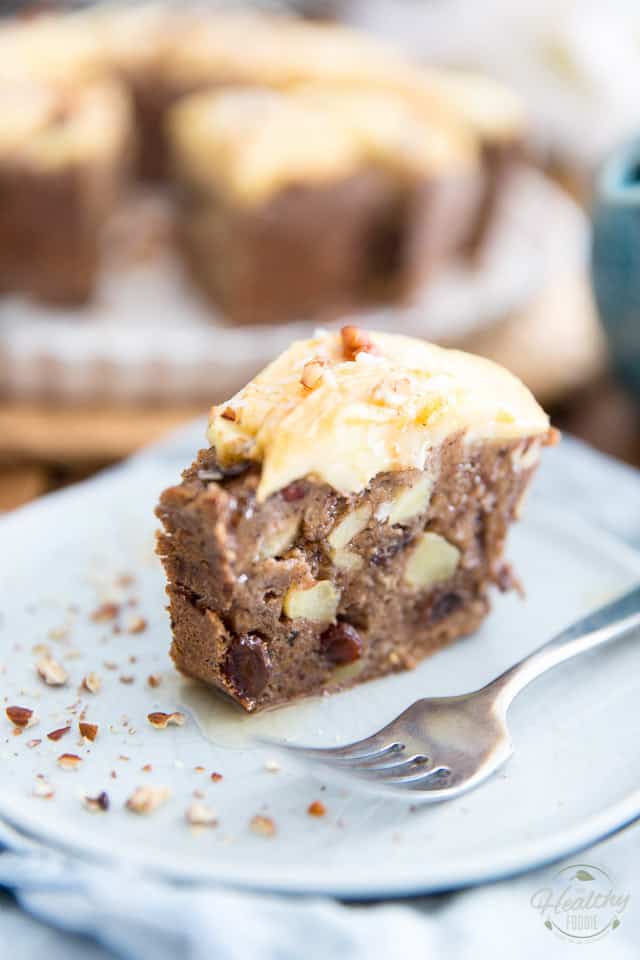 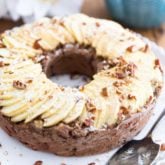 *You can make your own gluten free baking powder at home by combining one part baking soda, two parts cream of tartar and two parts non-grain starch, such as tapioca, potato or arrowroot. *Based on the experience of many, this cake must absolutely be baked in a tube pan. No other pan ever gave conclusive results.

*Editor’s Note: This post was originally published in March of 2012 and has since been completely revamped and updated with better wording and pictures. No modifications to the original recipe have been made.

posted by Sonia! The Healthy Foodie on February 2, 2019