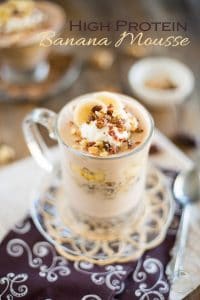 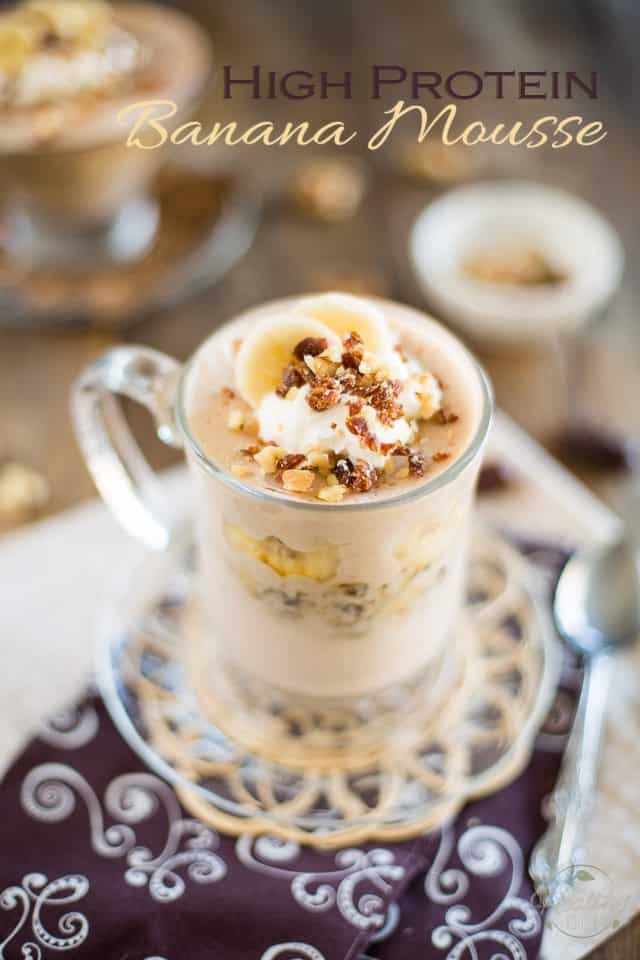 Post workout shakes are now a very important part of my daily feedings, and I must admit that I pretty much always look forward to them.

But when you do shakes every.single.day of your life, they sometimes can get a tad… boring? No. That’s not exactly it. More like, redundant!

Since I tend to do bananas in my shakes A LOT, I figured hey, why not change things up a bit and turn that shake into a decadent mousse, instead? A High Protein Post Workout Banana Mousse. Whoa! I really loved the sound of that!

And so I did, and oh my word, is this stuff ever good. It’s got a dreamy texture, so airy and light and fluffy, just like any good mousse should. Not only that, but this one also hides all kinds of little treasures, namely a delicious date and walnut crumble, as well as creamy slices of sweet, ripe banana. The dream, I tell you! Seriously, it’ll have you want to work out twice that day, just so you can have another one… 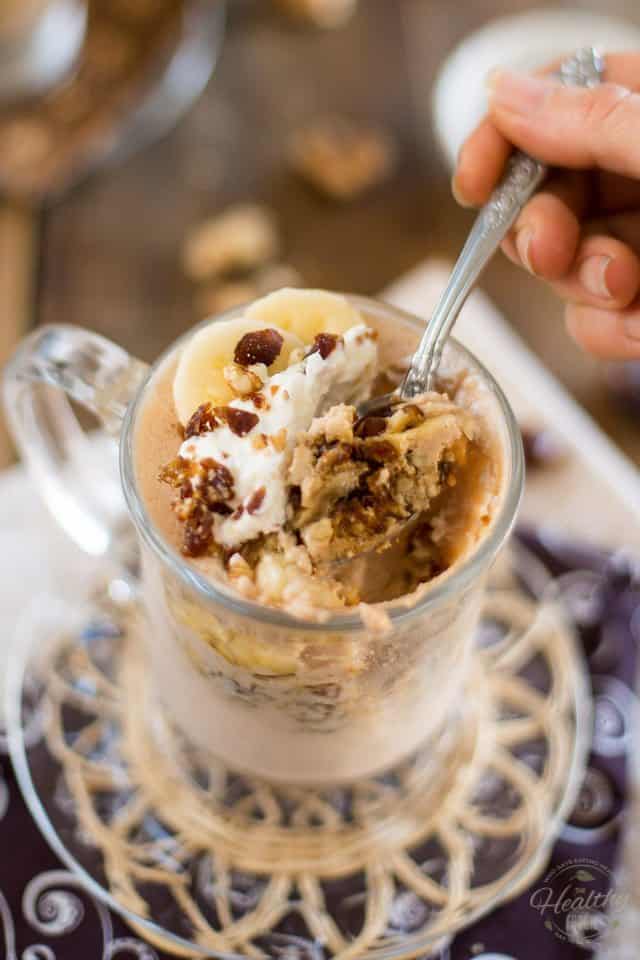 And while it may look like it’s extremely complicated to make and will ask of you that you spend all kinds of time in the kitchen prepping it, not to mention cleaning up afterwards, trust me: it really isn’t that bad. And the good thing is, you can easily double that recipe, so you have your post workout meals ready and waiting for you in the fridge for the next few days.

Once you really get the hang of it, it becomes almost as easy as putting a bunch of ingredients in a blender and giving them a good whiz.

Oh, and also too, you could just as easily make smaller portions and turn it into a super-healthy-but-o-so-delicious dessert instead, if you wanted to!

So come on, dare give it a try. I’m absolutely positive that it’ll become one of your faves… 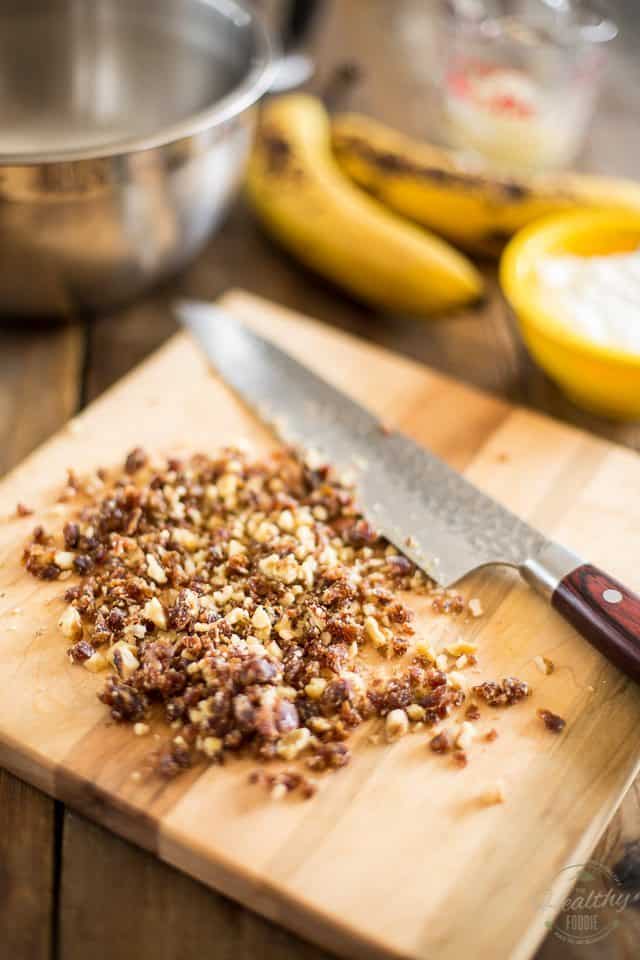 First, sprinkle a tablespoon of powdered gelatin over one quarter of a cup of warm water and let it “bloom” for a few minutes, while you work on the rest of the recipe.

Then, place the chopped walnuts and dates on a cutting board and chop them together, moving them around and mixing them together as you chop, until they become well combined and have a texture that resembles a crumble.

Now put that away, far from your eyes, fingers and mouth. Hey, you want there to be some left when you go to assemble your banana mousse! 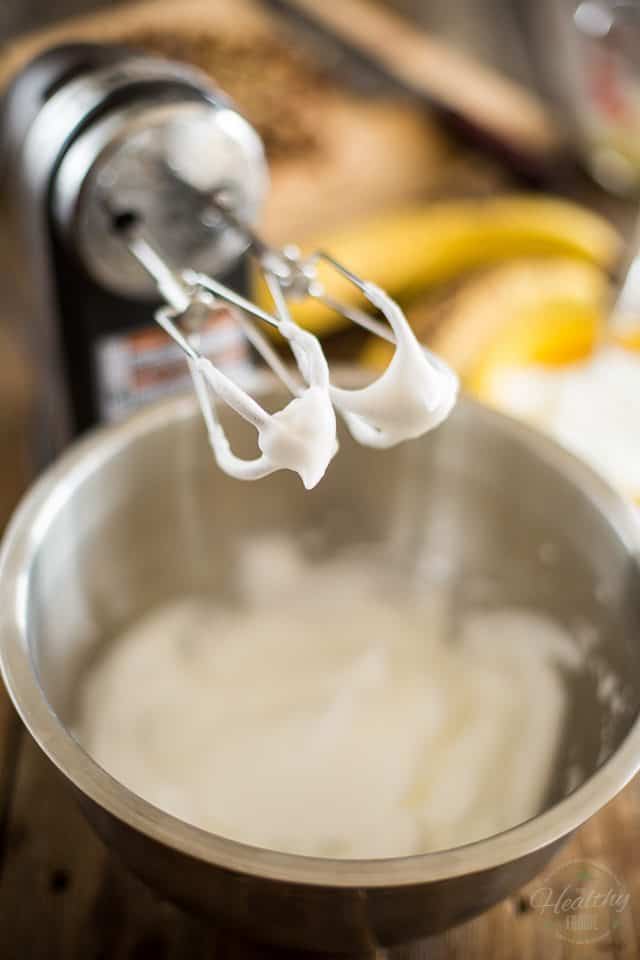 In a large, clean mixing bow, whisk the egg whites with a hand mixer set on high speed until stiff peaks form; set that too aside. 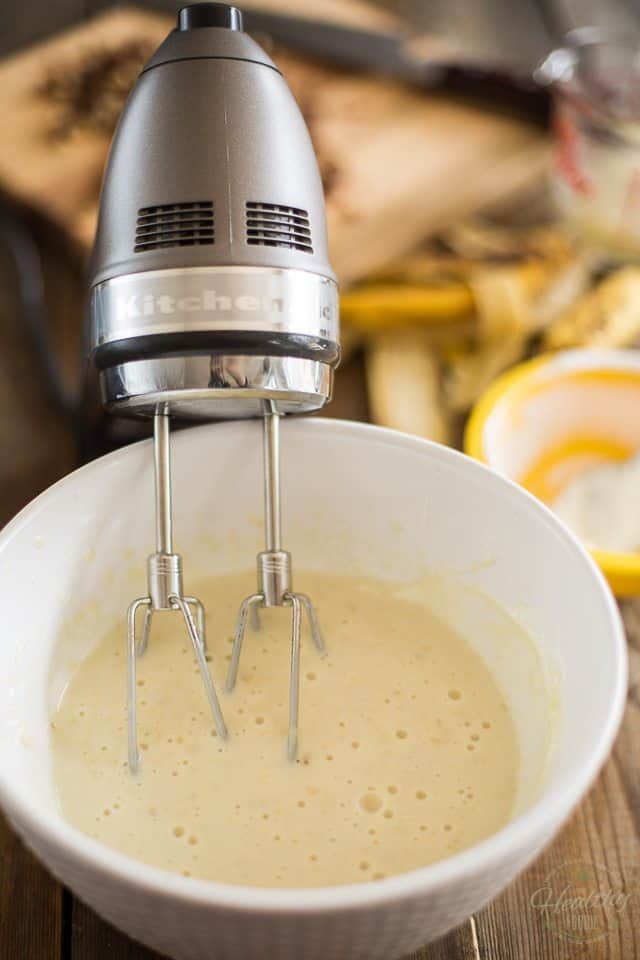 In a separate mixing bowl, place 1-1/2 ripe banana, a cup of plain Greek yogurt and 2 scoops of whey protein powder. Mix well with your electric mixer set on medium speed this time, until completely combined and slightly frothy.

Your banana mixture should have a consistency similar to that of buttermilk pancake batter. 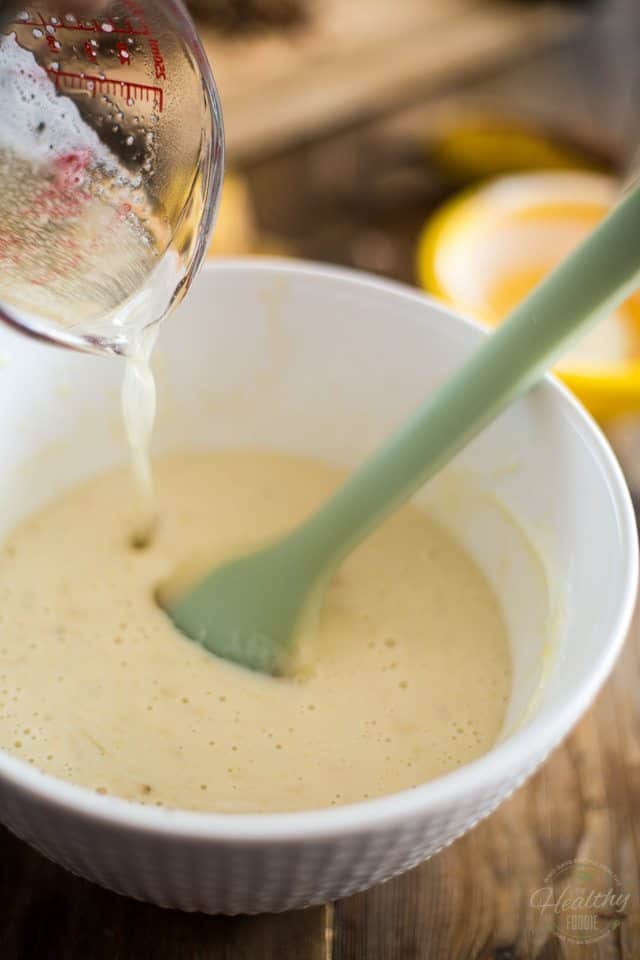 Now place the bloomed gelatin in the microwave for about 15 to 20 seconds, or until it’s completely melted but not hot.

Add that melted gelatin to the banana mixture and stir until it gets completely incorporated. 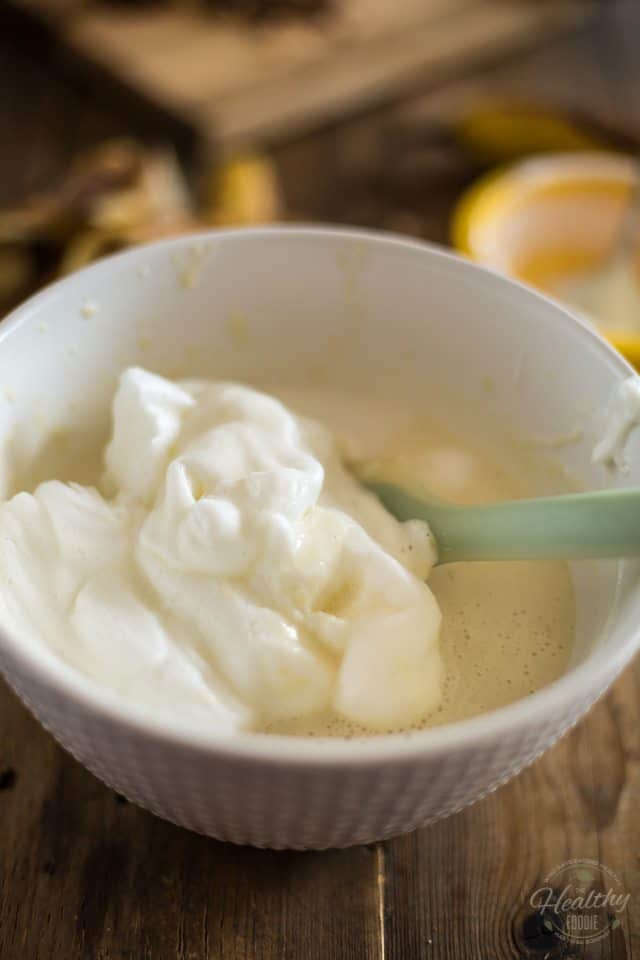 Next, fold in the whipped egg whites with a rubber spatula and mix delicately until they too, get completely incorporated. 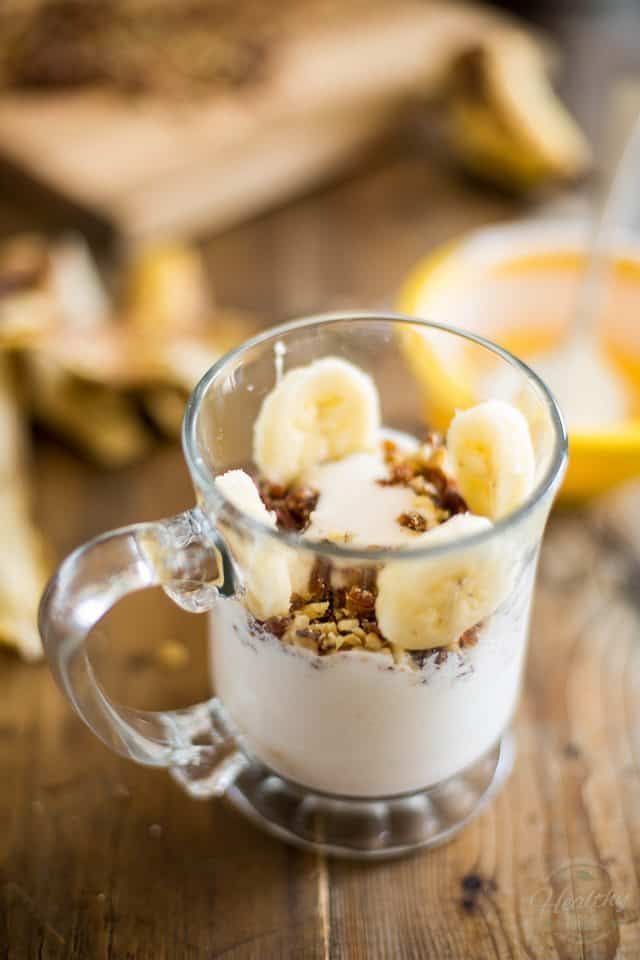 Fill two large 16oz glass coffee mugs about halfway up, then sprinkle about one quarter of the walnut/date crumble on top of each.

Just to be clear, you’ll be using about half the crumble in total. You’ll want to save the rest to use as a garnish once the mousse has set. Again, better keep that well away from your eyes, fingers and mouth!

Slice the remaining half banana and arrange a few slices around the sides of each mug. 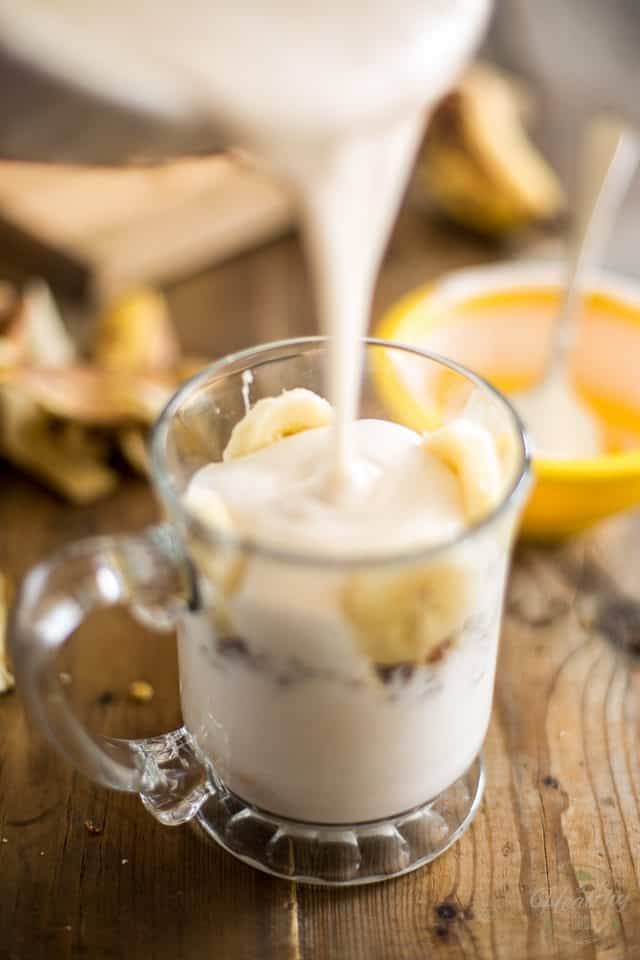 About those banana slices: try and get them to completely stick to the sides of the mug, so the mousse doesn’t have a chance to get between them and the glass when you fill the mugs with the mousse.

Using a mug with really straight sides really helps;  mine was a tad curvy, so as you can see, some of that mousse managed to sneak in…

Now send your mousse to the fridge until it’s completely set, about 4 hours or better yet, overnight. 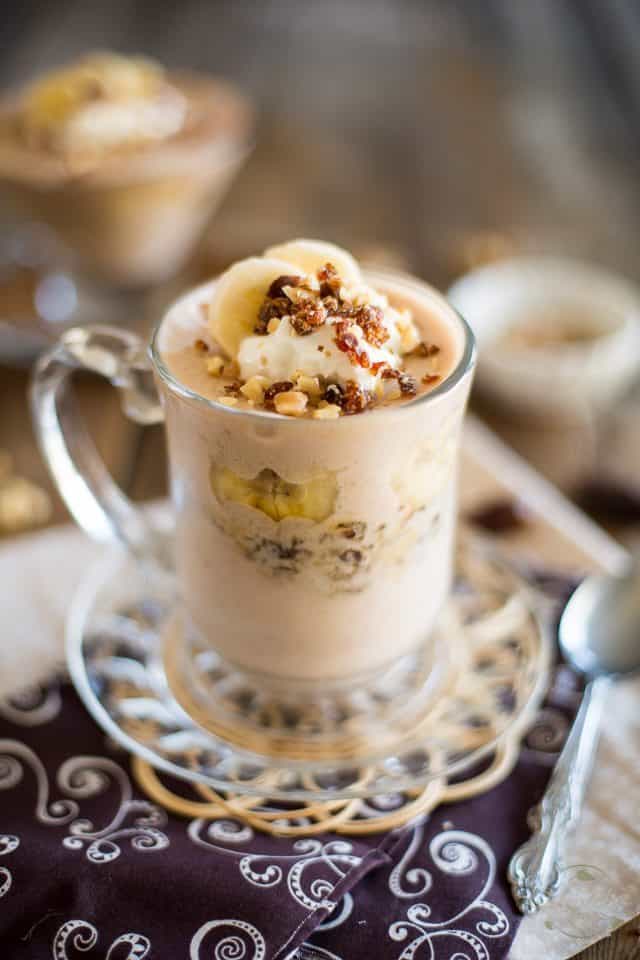 Garnish with a little dollop of Greek yogurt, top with the remaining date/walnut crumble (you didn’t eat that now, did you?) and a few more slices of bananas.

And now, put this back in the fridge until you’re done working out. Then and only then will you finally be able to dig in. 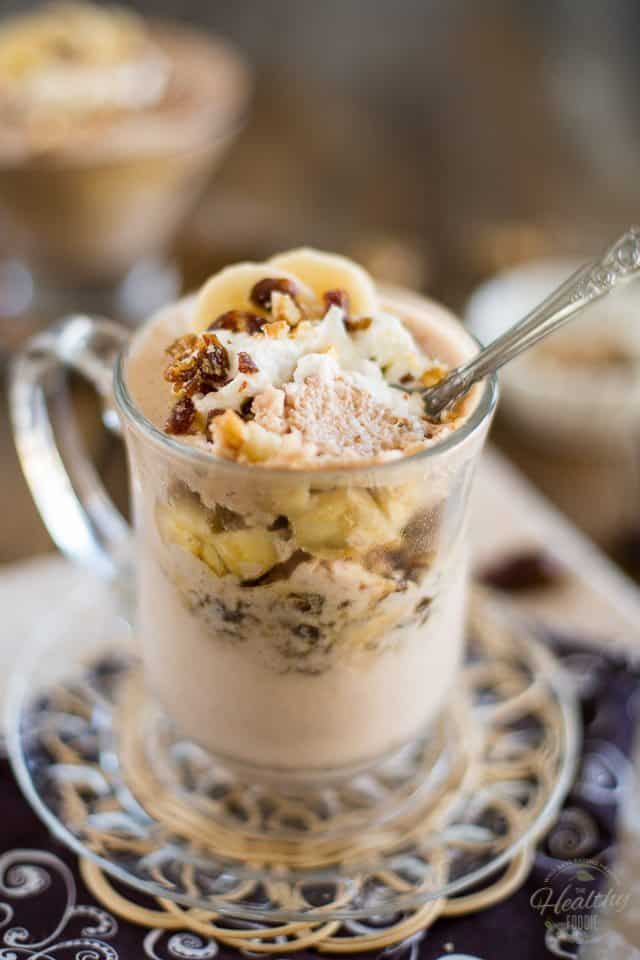 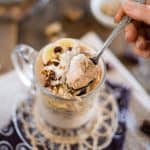 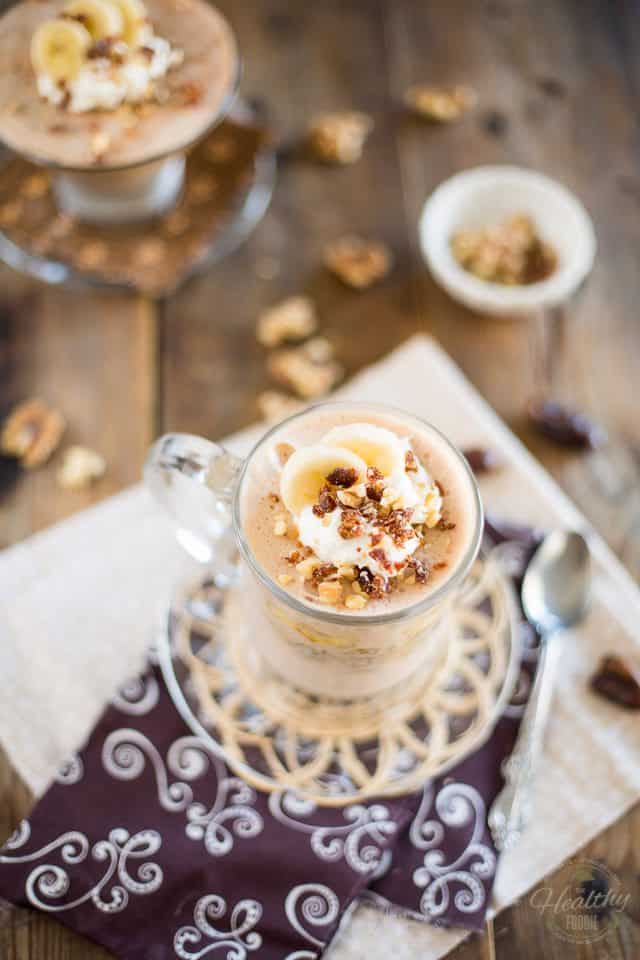