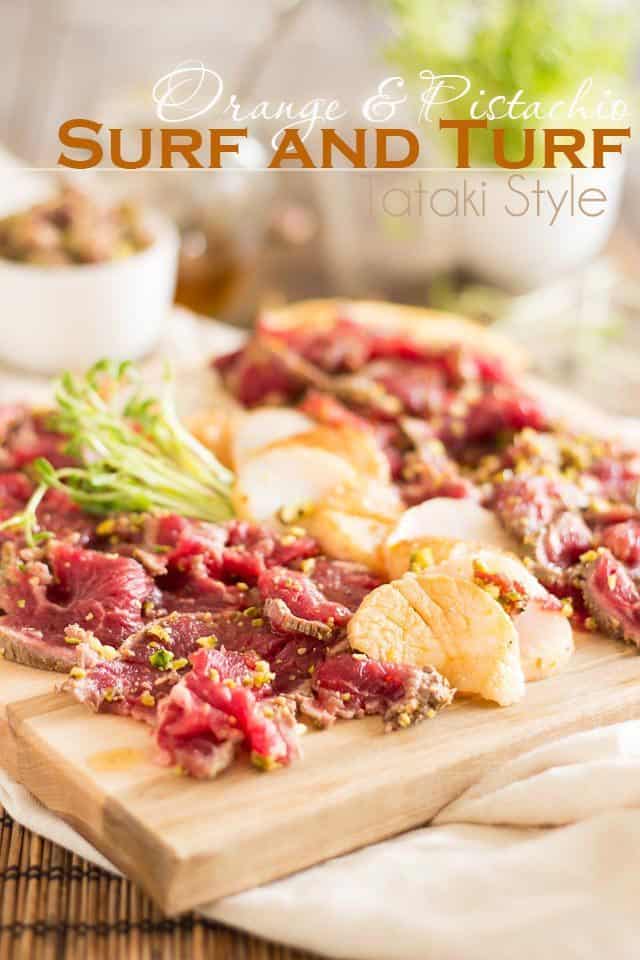 If someone asked me today what I would choose to have as my final meal, this Tataki Style Orange Pistachio Surf and Turf would be a serious contender. Like, one that sits really, really high on the list.

In fact, I think I can honestly say that this reinvented Surf and Turf deserves a spot on the list of my top 10 ultimate favorite meals ever.

Mind you, I must admit that I do have a very big thing for raw or close to raw meat. For me, there are only 2 ways to enjoy beef and that is barely cooked at all or cooked for a very long time in its own juice at very low temperatures until it becomes so tender it literally melts in your mouth…

The one thing about raw meat though is that it often tends to lack flavor… you generally do need to provide a little help in that department. Well, trust me, I did more than just that with this unique creation First, marinating the meat overnight in tasty ingredients such as orange juice, chili peppers and star anise did a very good job at building a solid foundation that’s full of character.

Then, coating the tenderloin in a pistachio and orange crust not only added another layer of exquisite flavor, but it also incorporated a new sensory experience for the palate by adding a soft and delicate crunch.

And finally, the infused oil adds the finishing touch that binds all the flavors together. The mild flavor of the orange as well as the subtle yet intriguing hint of vanilla are a mighty fine addition that will not fail to both please and seduce your palate

Honestly, if you’re looking for an easy recipe to wow and impress your friends or loved ones, if you are wanting to serve them a meal that they won’t soon forget, this provocative and unique twist on a great classic is definitely the way to go. 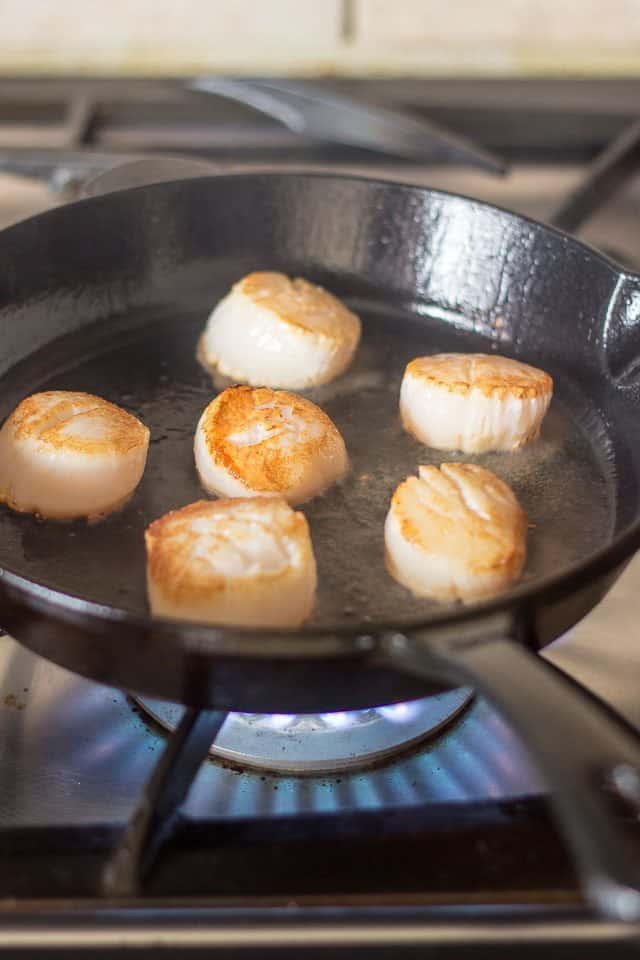 First and foremost, make sure that you pat the scallops and beef tenderloin REALLY DRY. Any water on your meat and it will one – splatter all over the place like crazy and cover your entire kitchen in a greasy film and two – eventually boil as opposed to brown. So don’t skip this step and don’t be cheap: use LOTS of paper towels.

Then, add a generous amount of ghee to a skillet that can handle some serious heat (cast iron preferred) and place it over thermonuclear heat. Extreme heat is of utmost importance here if you’re hoping to get this beautiful golden crust going. Keep in mind that you do not want to cook the scallops, they are to remain raw on the interior. All you want to do is get that beautiful golden crust on them, so you want to introduce them to SUPER HIGH HEAT for a very short amount of time.

Wait until your pan is scorching hot and then add the sea scallops. DO NOT MOVE THEM until that crust forms, which should take about 30 to 45 seconds per side. 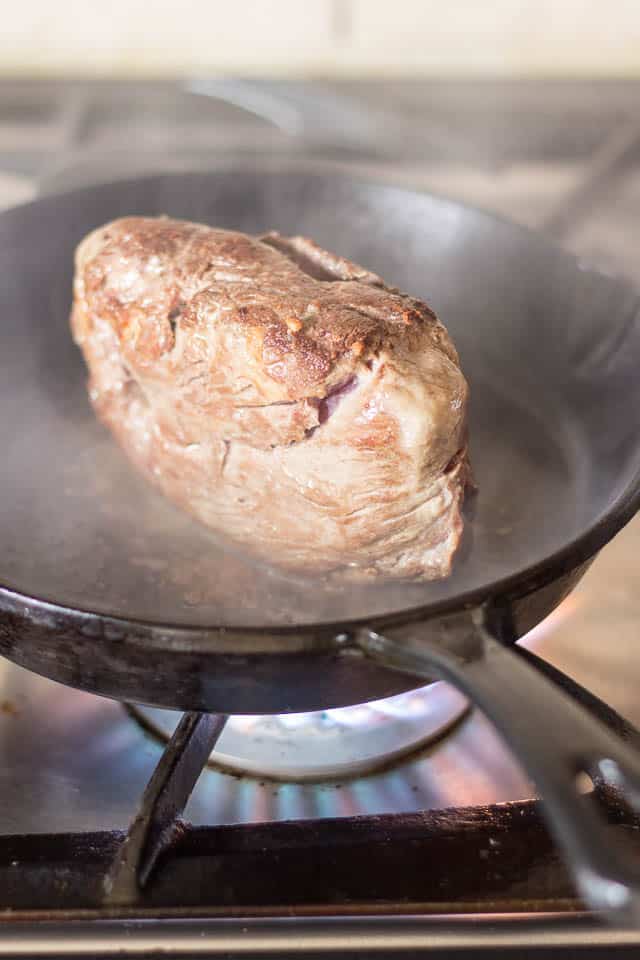 Remove your scallops to a plate and sprinkle the beef very liberally with salt.

Add more fat to the pan and then add the beef tenderloin. The exact same principle applies here. You only want to sear the piece of meat on all sides until it gets beautifully brown and crusted all around.

Oh, by the way, this IS going to generate a heck of a lot of smoke, so it might be a good idea to unplug or remove the batteries from your smoke detector (only temporarily, though, don’t forget to put them back after) or have someone wave a towel at it throughout the entire process, because I can guarantee that it will go off, and more than once!

Once the meat has been seared on all sides (don’t forget the ends!) let it cool for a few minutes while you work on the marinade… 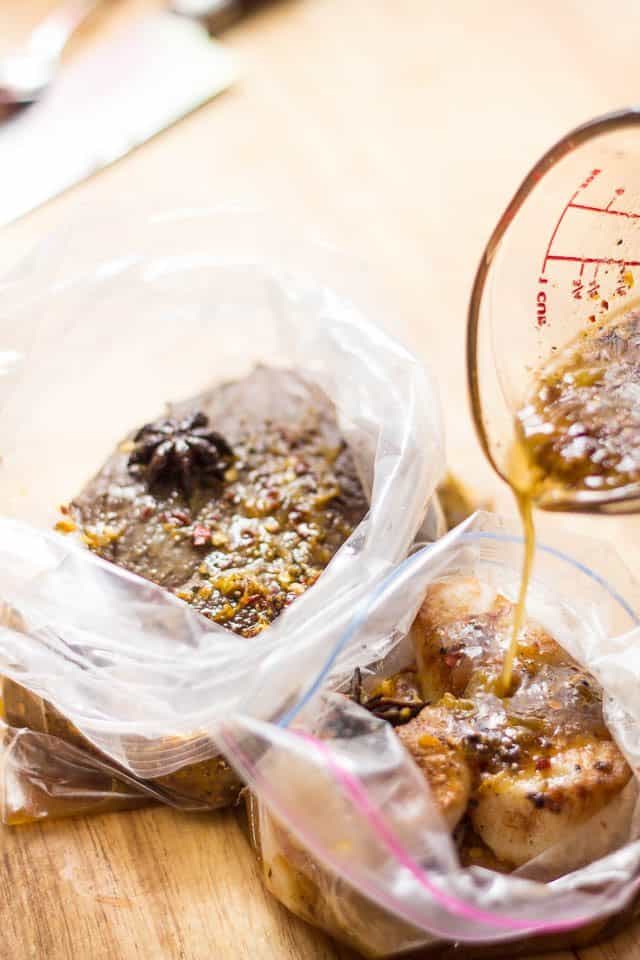 To make that marinade, simply combine all the ingredients in a glass measuring cup or small mixing bowl, preferably one that’s equipped with a pouring spout.

Then, place the scallops and tenderloin in two separate re-sealable bags and pour the marinade right over them. You’ll probably end up using about 3/4 of the amount for the beef and 1/4 for the scallops. Make sure you place one of the star anise in each of the bags. 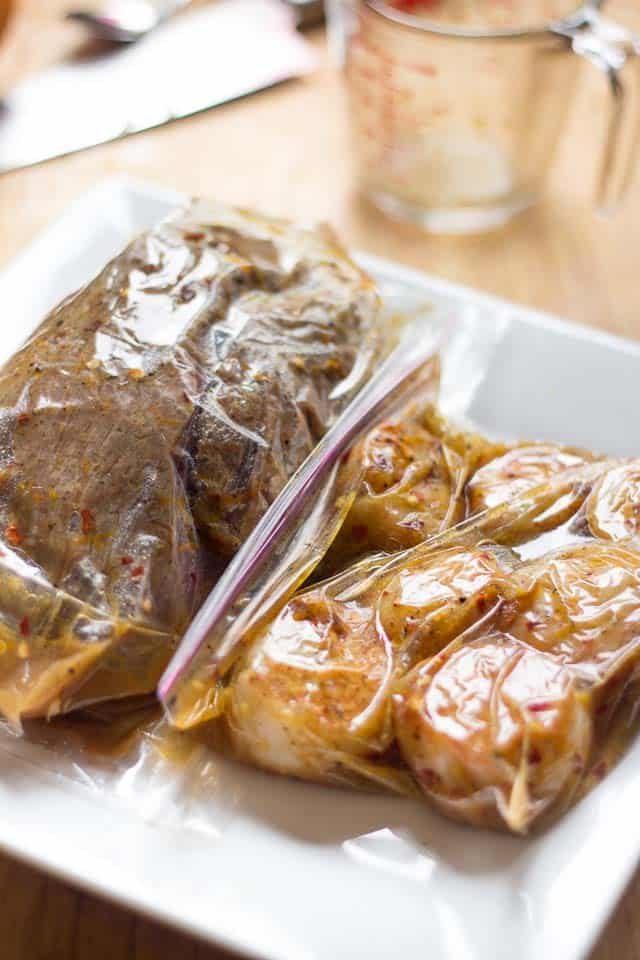 Seal the bags while removing as much air as possible and then refrigerate your meat for at least 4 hours or better yet, overnight.

You might want to flip the bags a once or twice during that time, just to help distribute the flavor a little more… 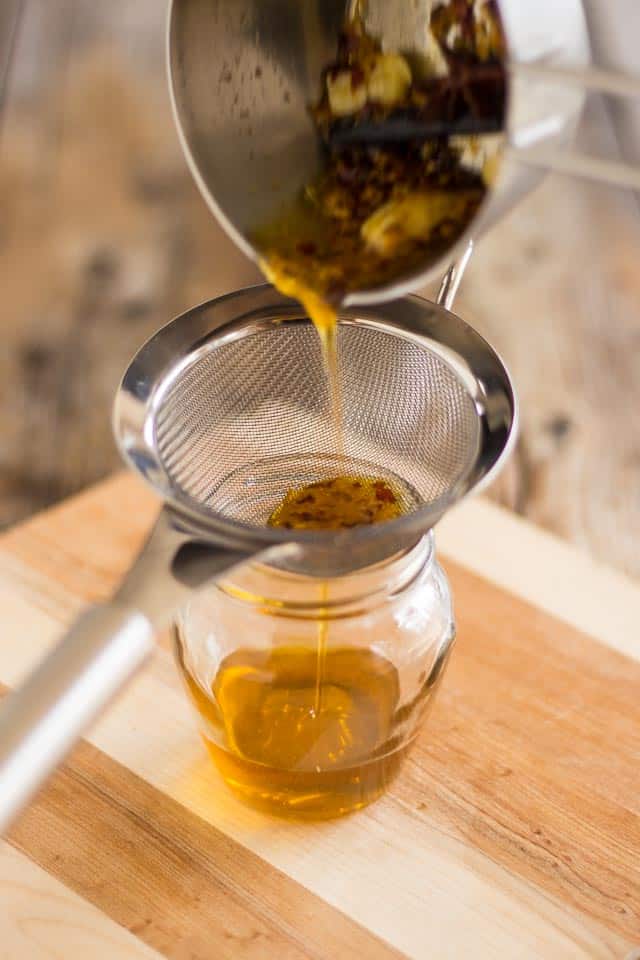 While the meat is marinating, get busy making the infused oil.

Put all the ingredients for the infused oil in a small saucepan set over low heat and bring this to a slow simmer, which should take about 4 to 5 minutes, then remove from heat.

Let the oil get back down to room temperature while it infuses with all the wonderful flavors that you just introduced to it, at least 3 to 4 hours, then strain it through a fine mesh sieve.

Set aside until ready to use (you might want to store it in some kind of a jar if you’re not going to use it until the next day). 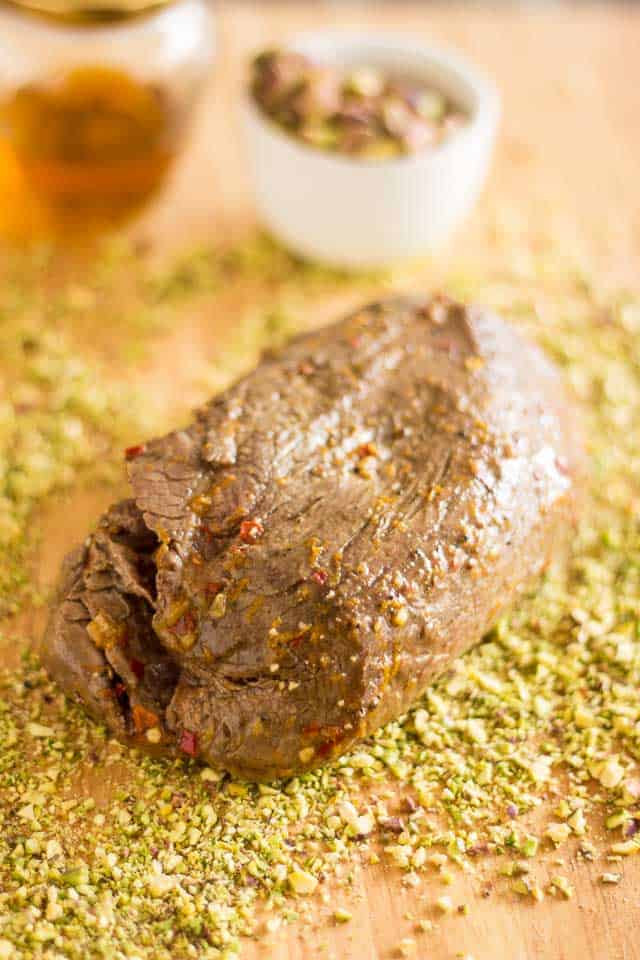 On a wooden board, chop the raw pistachios very finely and mix in the zest of half an orange.

Remove the beef from the marinade, let it drip for a few seconds and then place it right in the middle of that bed of chopped pistachios. 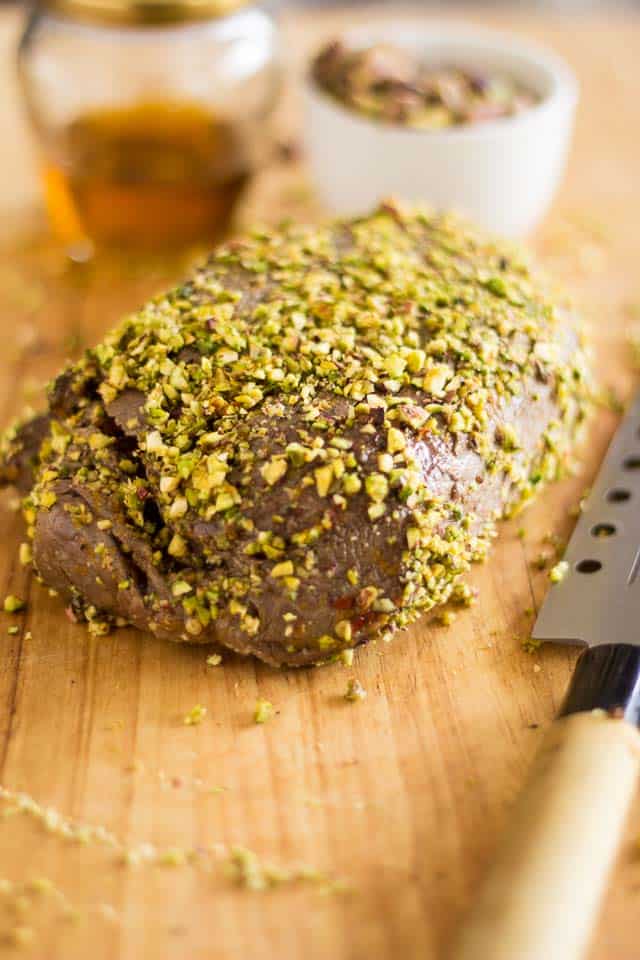 Roll the beef in the chopped nuts until it’s nicely coated. 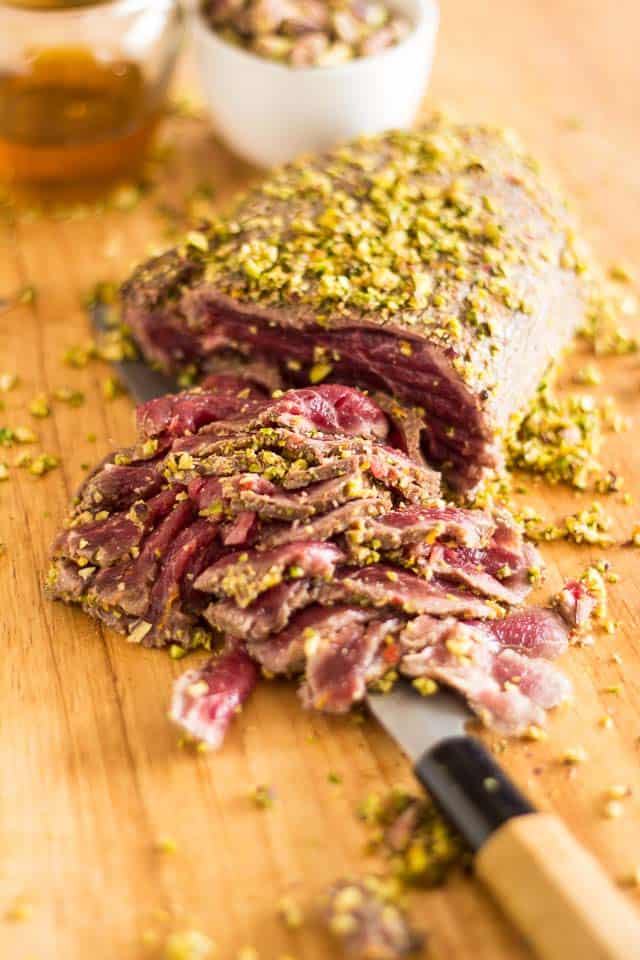 Slice the meat against the grain as thinly as you possibly can and arrange it on a serving platter, making sure to leave a great big space in the middle for the scallops. 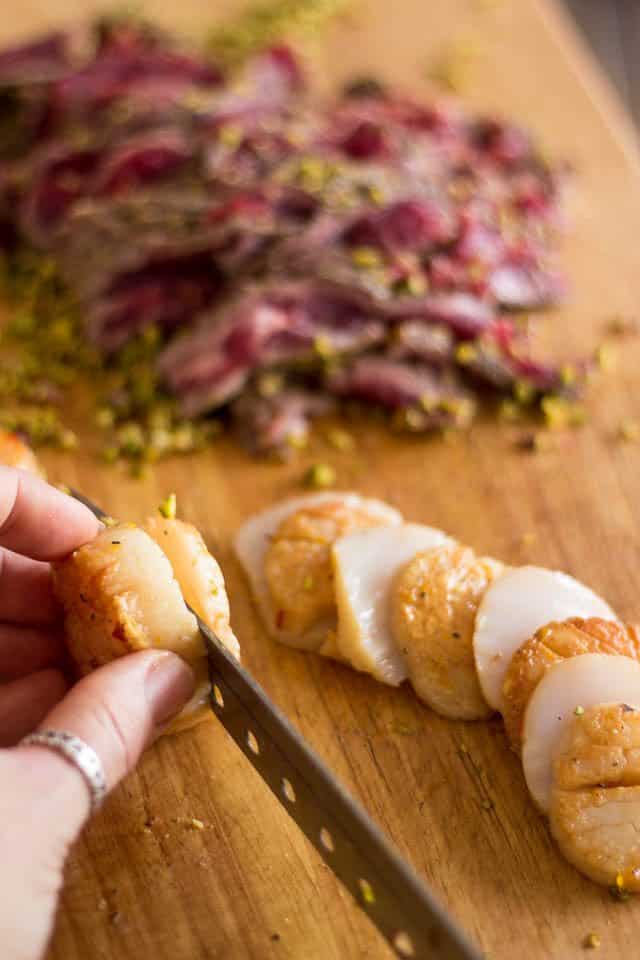 Speaking of scallops, now would be a good time to remove them from the marinade and slice them.

You’ll want to go at it lengthwise and keep those slices real thin so you can get 4 slices per scallop.

Arrange those scallop slices on the platter with the beef, alternating between “cooked slices” and “raw slices” so you get a nice color contrast going. 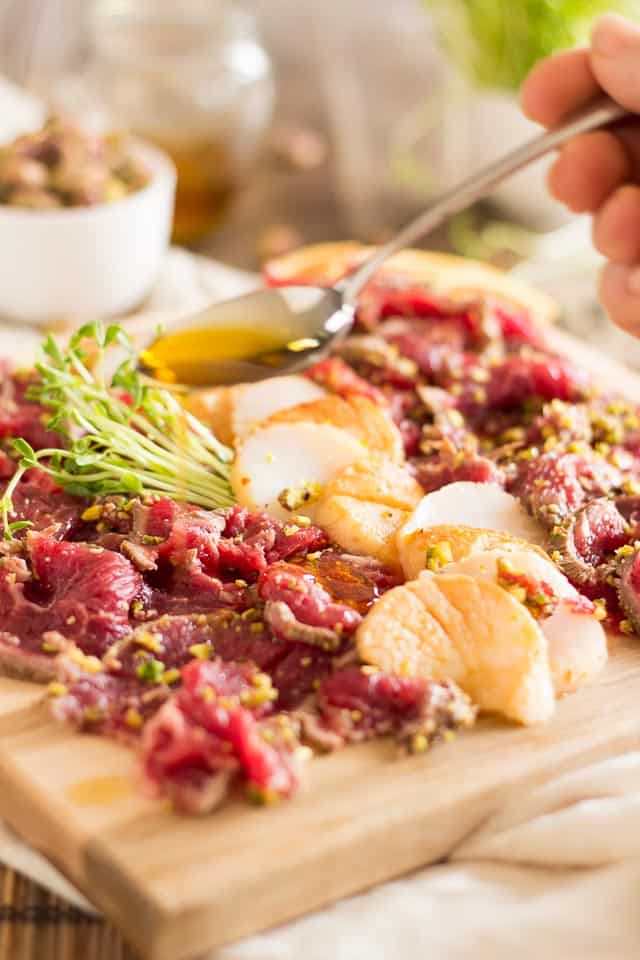 Now surely you got a little bit of chopped pistachios that got left behind after you were done slicing your beef… don’t let that go to waste. Sprinkle it all over your Surf and Turf and then drizzle generously with the insanely fragrant infused oil and serve.

Oh, and if you’re not quite ready to eat just yet, you can prepare this a couple of hours in advance and cover it with plastic wrap.

Just wait until the very last minute to add that ambrosial infused oil… especially if you’re gonna serve this on a wooden board.

You wouldn’t want that board to steal it all from you! 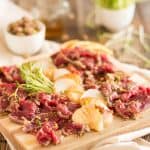 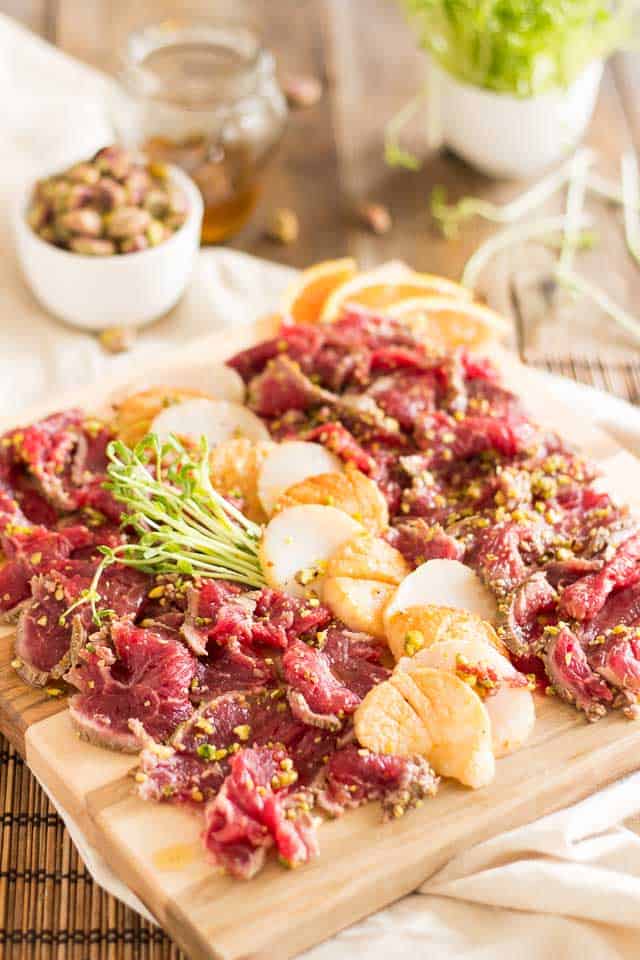 posted by Sonia! The Healthy Foodie on November 8, 2014