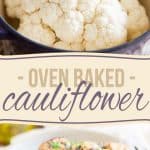 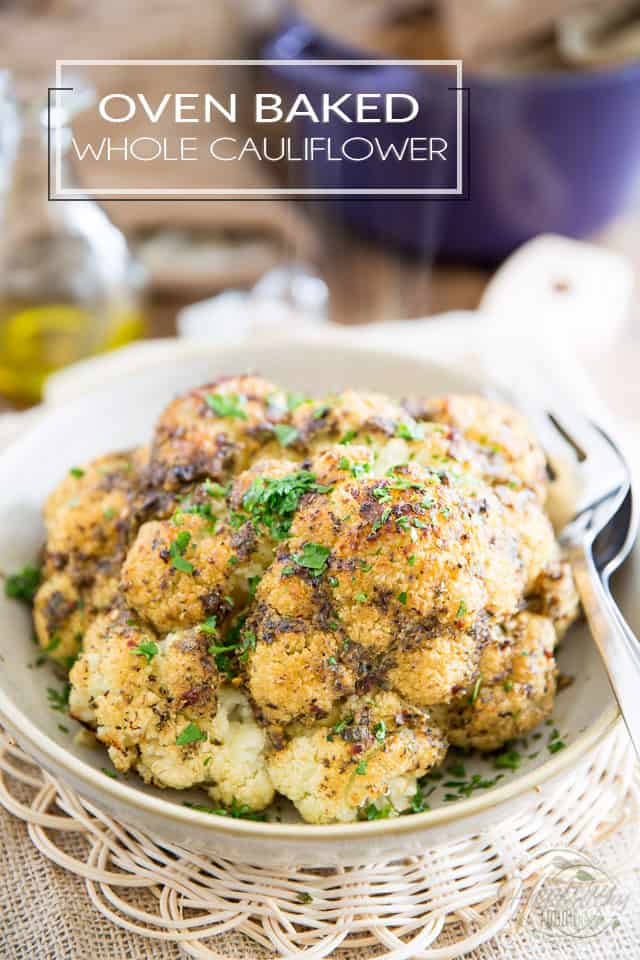 This is probably the easiest and tastiest way to prepare cauliflower, EVER! I’m telling you, it’ll turn you into an instant fan, even if you think you aren’t on best of terms with cauliflower right now.

First off, whole roasted cauliflower is EXTREMELY low maintenance. The cauliflower itself really doesn’t require much preparation at all and once it’s in the oven, it won’t really need you to attend to it much, except maybe to check for doneness after a little while and then switch the oven to broil once it’s done to your liking. Not what I would call complicated!

Secondly, this cooking method won’t turn your entire house into a major stink zone! Rather, it will probably fill it with the loveliest sort-of-roasted-garlicky aroma. Not what I would call unpleasant in the least. 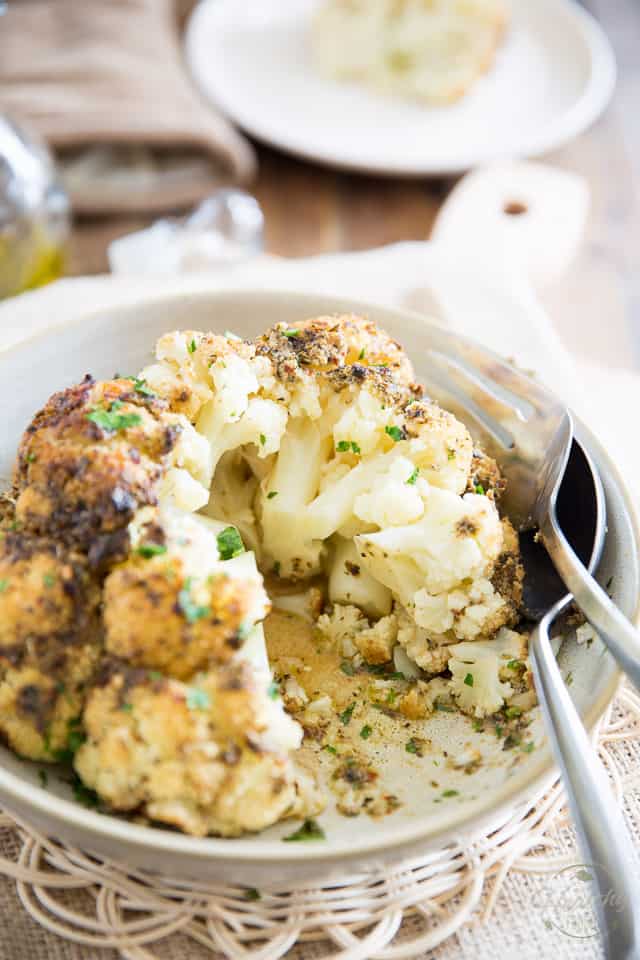 Lastly, cauliflower cooked this way becomes so super moist and tender and crazy tasty and so delicious, you’ll just want to eat the whole thing to yourself and not share one bit with anyone. Frankly, at a little over 150 calories per serving, you could probably afford to do just that, too!

Honestly, if you’ve never tried a Whole Roasted Cauliflower before, you have to do it, right now. I have no doubt that you’ll be completely sold! 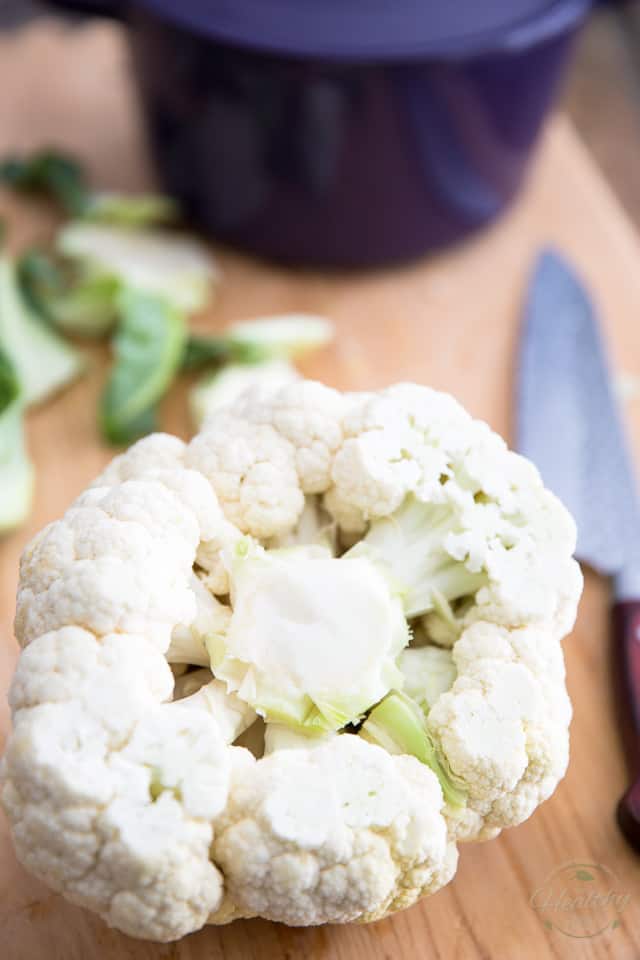 This baby needs to cook in a really hot oven, so before you do anything, you’ll want to turn that knob all the way up to 400°F.

Then, you’ll need to prep your cauliflower for the ride but like I said earlier, this couldn’t be easier or less demanding. All you need to do is trim the outer leaves and then, if necessary, cut the stem flush with the rest of the head so your cauliflower gets to sit straight on its own, without any help on your part.

Don’t go removing the core, though, because then you’d most likely end up breaking up the florets and your cauliflower would completely fall apart. 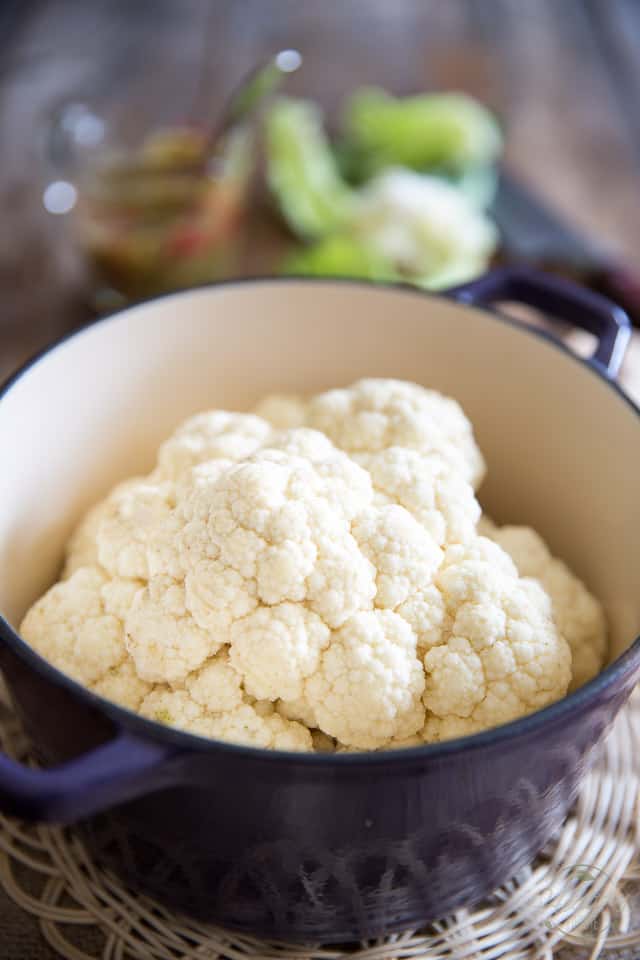 Then, place the cauliflower in a round 4½ quart Dutch Oven and make sure that the lid sits well in its place; if it doesn’t, shave a little bit off the base of the cauliflower until you get that lid to close. 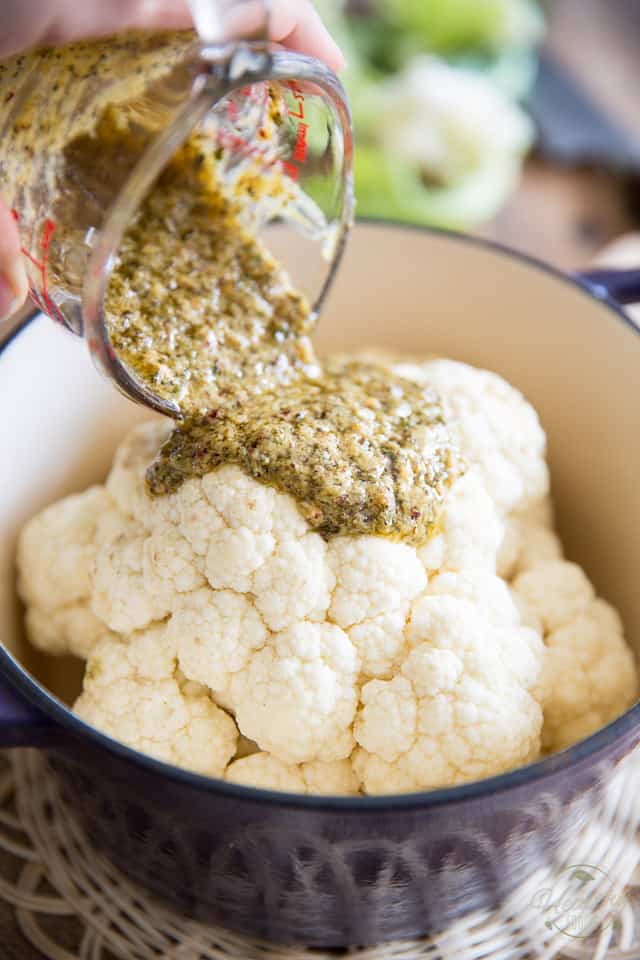 Next, in a glass measuring cup, combine some extra-virgin olive oil, Dijon mustard and apple cider vinegar — by all means don’t go using plain white vinegar, that stuff is WAY too strong —  along with some dried oregano, dried chives, garlic and onion powder, salt, pepper and a little bit of red pepper flakes (although you can totally leave those out if you’re not a fan of heat) and mix that vigorously with a fork until well combined.

Then, pour that mixture right on top of the cauliflower. 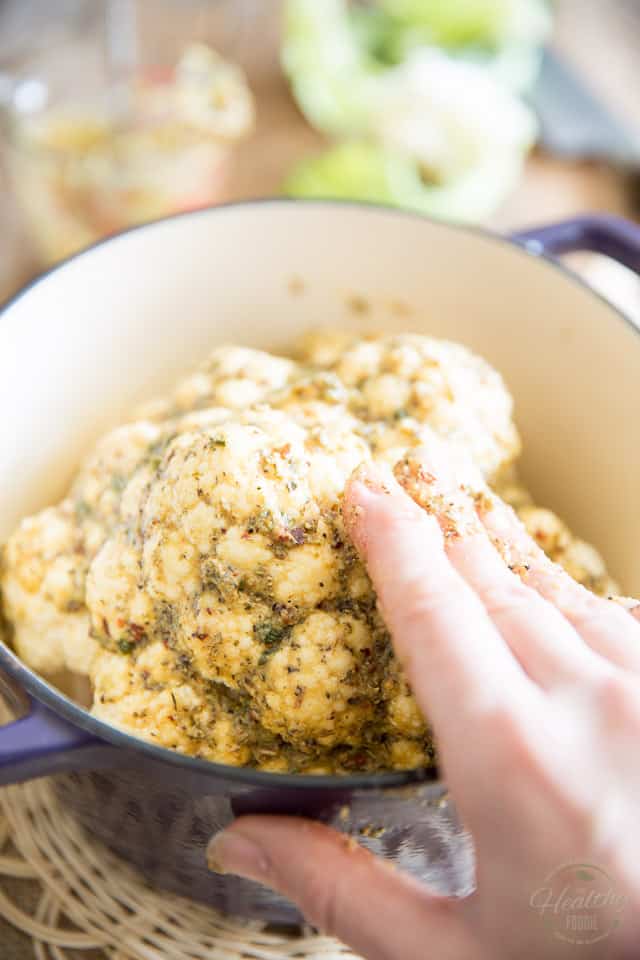 Rub that mixture over the entire surface of the cauliflower, until every last inch is well covered. You’ll want to favor the use of your fingers here, as they will do a much better job at pushing the seasoning into the millions of tiny little cracks and crevices of the cauliflower head.

If you preferred not to get your hands dirty, though, I suppose that a silicone pasty brush would very well do the trick.

All that’s left to do now is put the lid on and pop that baby in the oven for about 35 minutes, or until it’s tender and the tip of a sharp knife can be inserted in without resistance.

You’ll then want to take the lid off, set the oven to broil and place the cauliflower under the broiler for about 5 minutes, or until its top gets beautifully golden brown. 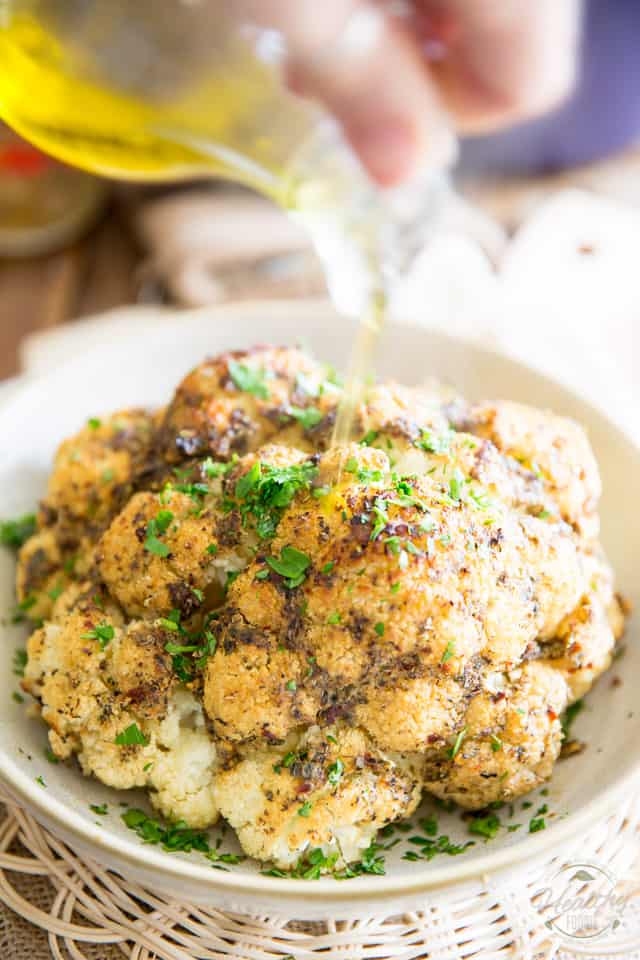 To serve, simply slice the cauliflower into 4 to 6 wedges with a sharp knife. 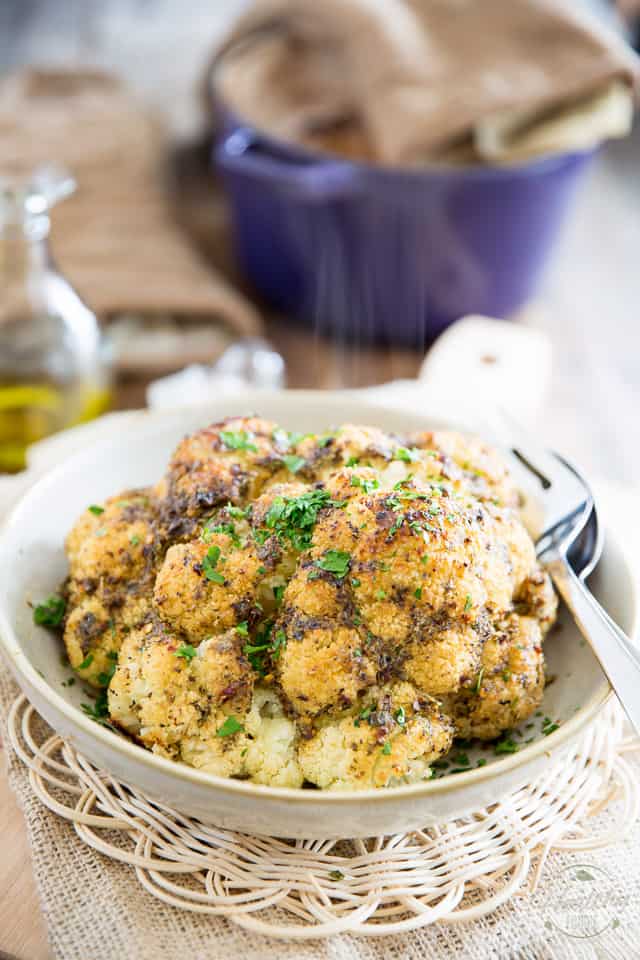 Although as you can see, this thing is REALLY hot when it comes out of the oven! You might want to wait a few minutes before you go to town… if you’re patient enough.

Oh, and for the record, should you be lucky enough to generate leftovers, you might be happy to know that this oven baked cauliflower is also incredibly tasty straight out of the ice box. I’m thinking that it would make an excellent base for a cauliflower salad of some kind.

Oooooooooh! I feel a tasty recipe coming up… 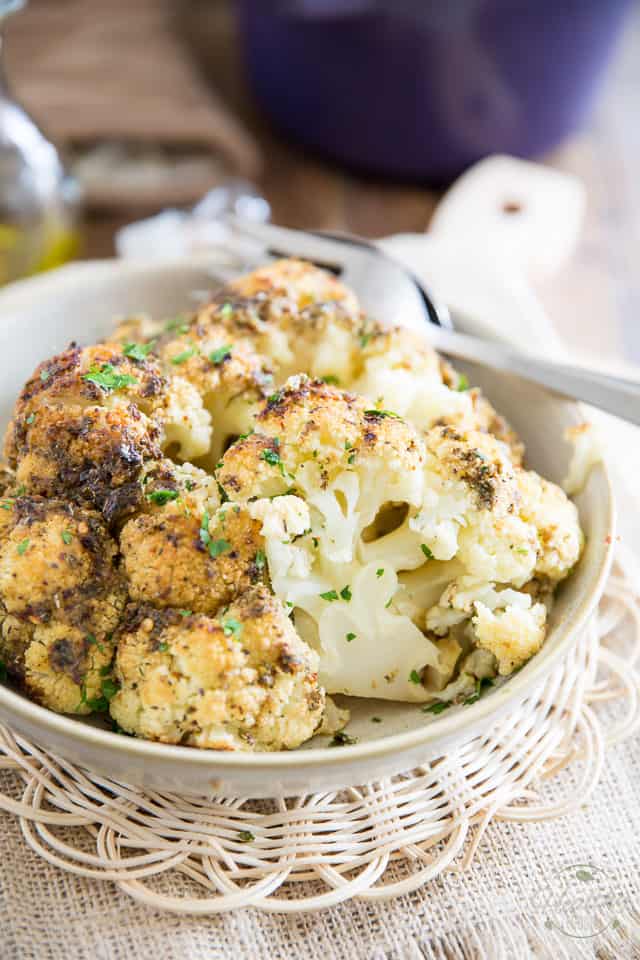 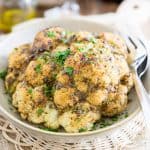 posted by Sonia! The Healthy Foodie on November 1, 2016