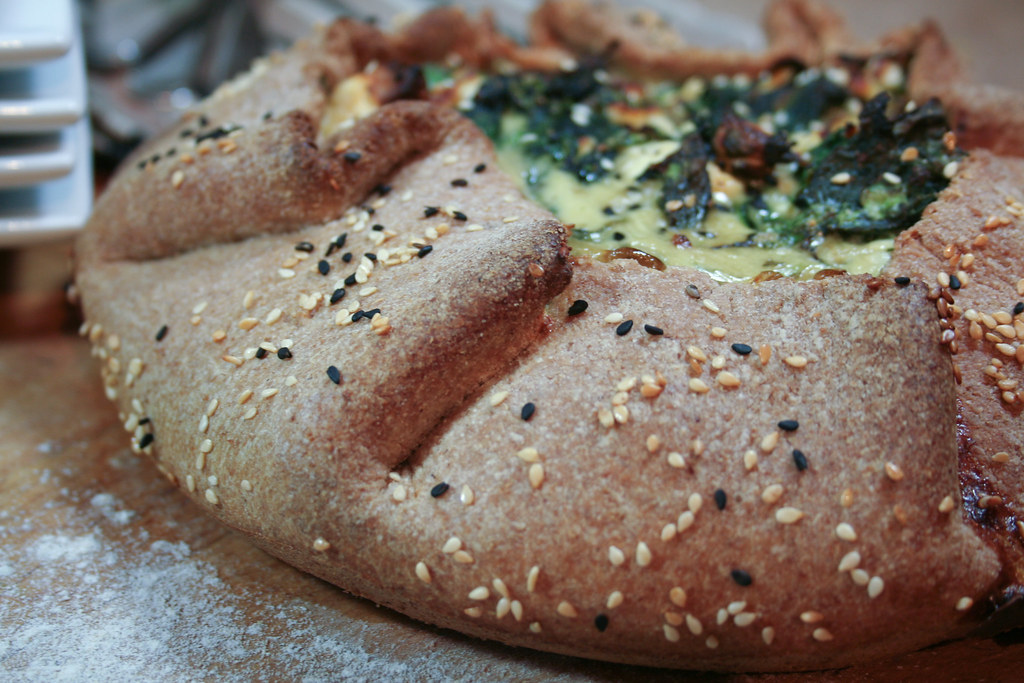 I don’t yet know what to think about that one. For the time being, I can’t say I am really impressed. With the dish or with my pictures… I have to say that in the cookbook where I found it, the picture is just plain mouthwatering; the galette looks incredibly scrumptious, the bread looks like it wants to just fall apart and melt in your mouth. In fact, it looks more like pie crust than bread. Oh well, professional photographers have a way, I guess. I still need to learn a trick or two… or a few hundreds!

Anyhow, maybe it’s not only to do with my photographing skills. I also happened to change the recipe somewhat, so of course, that no doubt changed the end result. For instance, I used whole wheat and spelt flour for the bread, instead of the all purpose the recipe called for, and used a little less olive oil, so that might explain why mine looks a lot tougher. As a matter of fact, the “bread” was kind of tough, but had a very interesting texture still.

As for the filling, I was missing a lot of the ingredients, and again, made some substitutions. However, the only complain that I have about the filling is that it was too runny and leaked during cooking and again, when I cut the galette into wedges. Maybe I should’ve really squeezed the spinach to get all the liquid out (I just pressed them to get most of it out) but I find this takes away so many vitamins and nutrients. I have to find another solution for that. Or live with the liquid… Maybe also my not being impressed has to do with the fact that it was very late when I finally got to eat this. I was going to visit my dad yesterday night, so I had prepared it in advance and left it in the fridge to cook when I would get back. By the time I returned, it was well passed 9:30, so preheating the oven, cooking for 45 minutes, letting it rest for 10, taking pictures for another 10… let’s just say it was fairly late when I finally sunk my teeth into that one. I didn’t really care for the first bite, but the more I ate, the more I liked it. I think this one is a grower, really… As I was eating, all I could think of were improvements I would make to the dish, like adding artichokes, for instance, and water chestnuts for some crunch, or nuts, maybe. A little bit of red peppers for some added colour? Why not! One good thing is I know that making this in advance can be done. Yay!

Come to think of it, the only thing I really need to deal with is all that liquid. I don’t like liquid coming out of where it isn’t supposed to be… like in lasagna, for instance! ;o)

Allright, enough babbling, I’ll give you my adapted version of the recipe so you can try it for yourself and maybe offer some insight…

*Next day edit… this galette is absolutely FABULOUS cold! We only ate half yesterday, so I decided to have some for lunch today. I didn’t bother reheating it and it’s a good thing, really. This makes for a delicious cold dish. Would be absolutely fantastic for picnics or pot-lucks. « Previous PostApple Cinnamon Oatmeal with Almonds
Next Post » No Knead Country Bread – Fail (or not!)