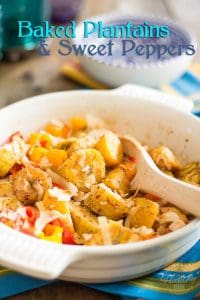 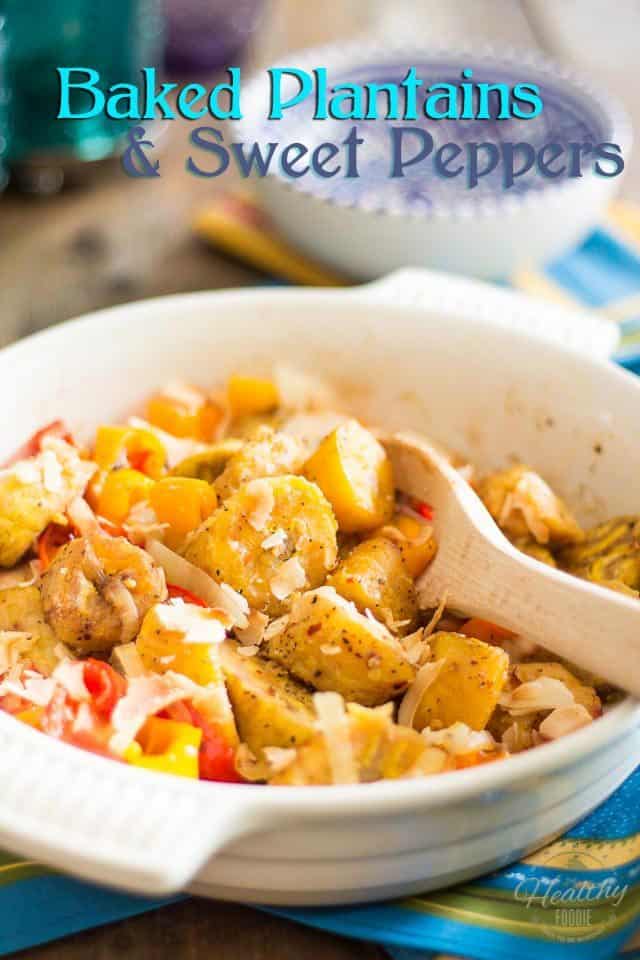 If I tell you something super silly, do you promise not to laugh at me? I mean really… it’s SUPER silly and you’ll probably think I’m nuts, which I’m not. Or well, maybe just a little… but not so much, I swear.

Alright… I guess it’s too late to back off now, isn’t it? I kinda told you I was gonna tell you something silly, so I can’t really change my mind now, can I? *Gasp* I can’t believe I’m about to tell you this…

This morning, right in the middle of my workout, I actually hugged my barbell and told it (or well, more like thought to myself; I told you I’m not THAT crazy) that I would really miss it, but that it should not fear for I was not abandoning it. Only life was forcing me to take a little break, but I would soon come back even stronger and we’d have that much more fun together.

And then, to kinda “seal the deal”, I proceeded to treat us both (as in my barbell and I) to a little PR: I did a 95 pound strict shoulder press! Nothing to write home about, but still. I was happy to “polish things off” with a bang, even if it wasn’t a super mega loud one.

And so that’s it. Early tomorrow morning, I’ll be going in… I’ll be getting my knee cut open and ligaments sewn back into their rightful, normal, healthy state.  At least, that’s the plan. After that, it’ll be 2 weeks of no exercises whatsoever, followed by 6 months of rehabilitation. Hmpft. I’ve said it before and I’ll say it again, I’m scared shirtless, only without the “r”…

So for the time being, I’m trying to keep my mind in a happy place, and one such place for me would be Cuba. I haven’t been there in way too long and I’m starting to feel the itch to return: I miss the sun, I miss the sand, I miss the beach, I miss the people and I miss the food!  To help with that, I decided to try my hand at recreating one of my favorite dishes to eat when I go there: Baked Plantains and Sweet Peppers. 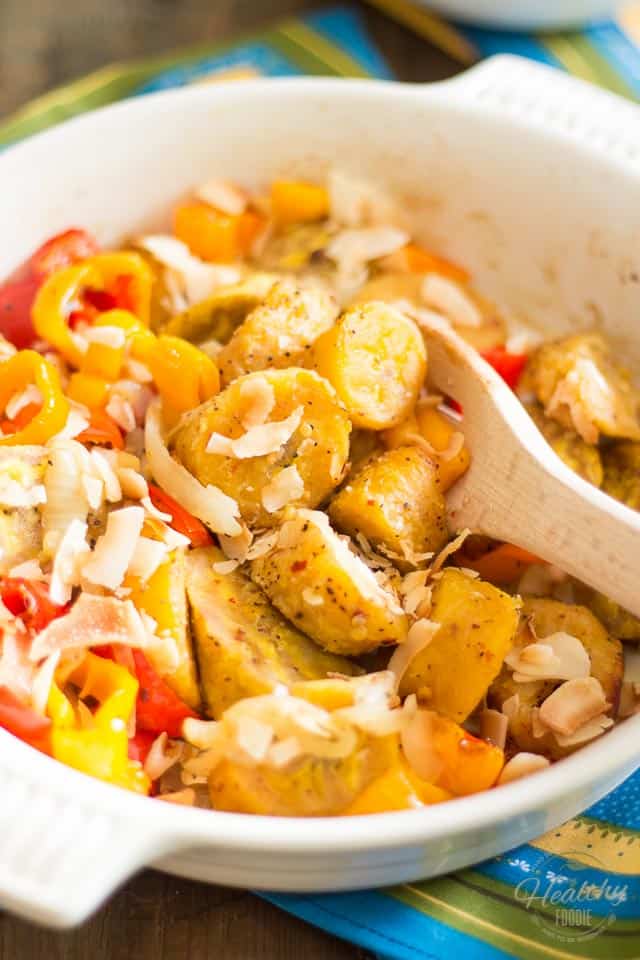 In fact, I’m pretty certain that they have an official name for that dish, but unfortunately, I have no idea what it would be. All I know is that it’s a dish that is almost always on the menu, and that I was never able to resist it.

Unfortunately, up until recently, I had no idea how they did it, so I would only be able to indulge when I paid my Cuban friends a little visit. But then I Iearned that you could actually BOIL plantain. What, really??? The thought would’ve never occurred to me, but I had to try it as soon as I found out.

All I can say is WOWSERS!!! Boiling the fruits resulted in precisely the flavor and texture that I’d been dreaming of. Now I knew exactly what I was going to do next. Throw them in a pan, saute them in a bit of coconut oil with some onions and sweet bell peppers, and then bake them in the oven with a little bit of coconut water.

The resulting dish was just as I remembered. Just one bite, and I was transported to my favorite Cuban resort, sitting next to the heavenly sandy beach, listening to the waves as they slowly rolled in…

And for an instant, I forgot all about an eventual knee surgery! 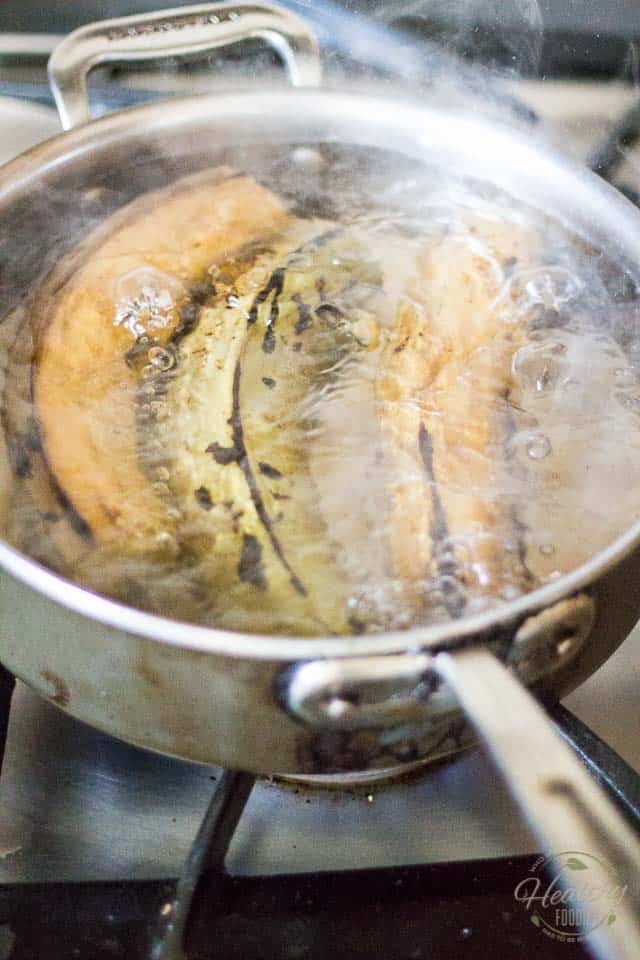 Trust me, if you’ve never had this dish, you have to give it a try. You will thank me for it, I swear.

You will need 3 yellow plantains. You don’t want them to be too ripe, nor too green. The middle one in the picture above was a little too green for my liking, and it remained kinda dry and starchy, even after cooking. The other two were just perfect. So look for beautiful, plump yellow plantains with just a few black spots on them.

Trim the ends off your plantains and place them in a large saute pan filled with salted boiling water. Cover and boil the fruits for 20 minutes. 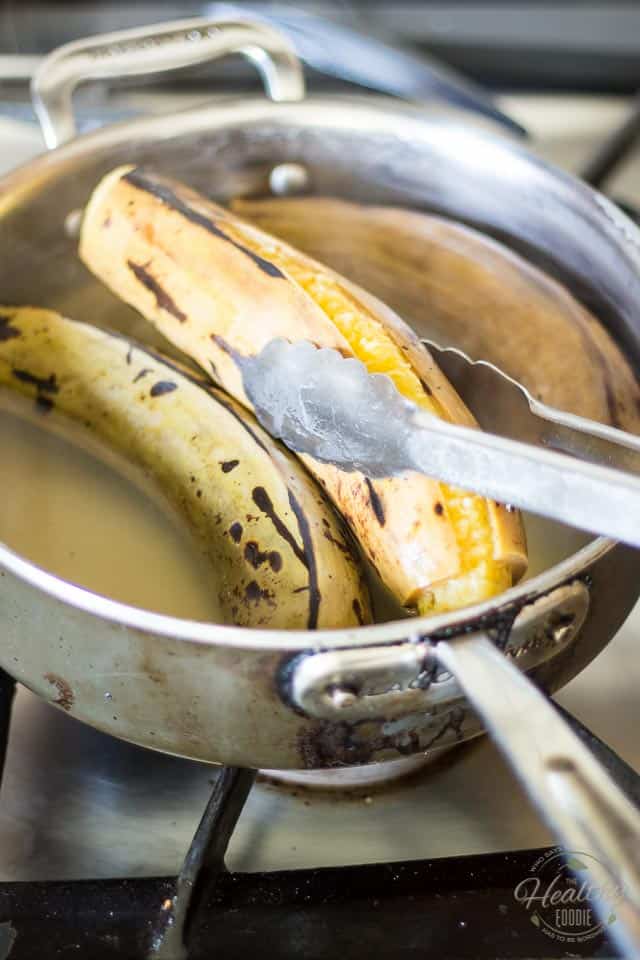 Then, using a pair of kitchen tongs, carefully remove the plantains to a plate and allow them to cool for about 5 to 10 minutes, or until they can safely be handled with bare hands.

Don’t worry if your plantains crack and pop open like the one in the above picture, it’s completely normal and even desirable. It’ll make the peeling that much easier! 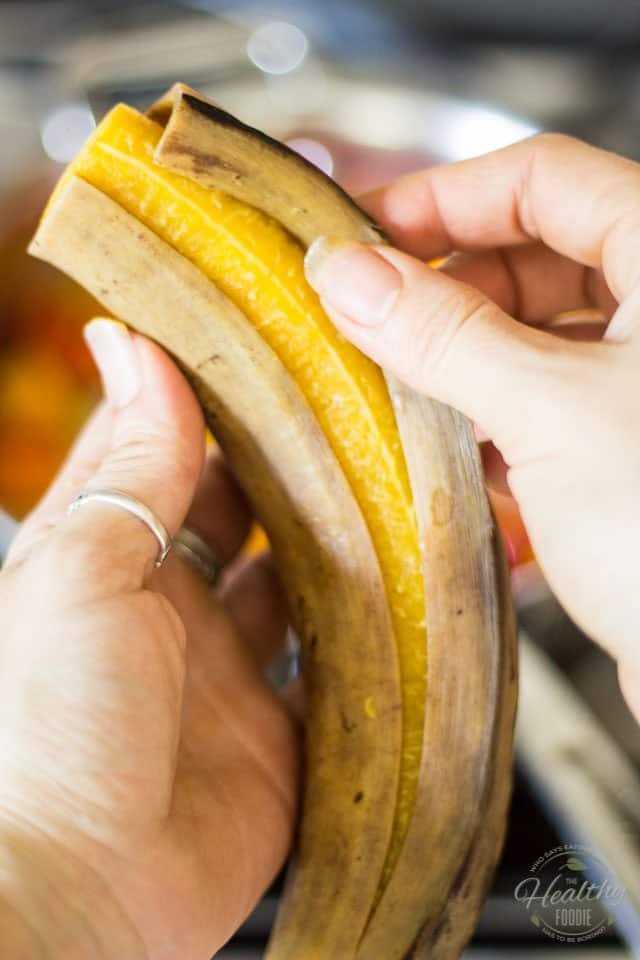 If, however, your plantain didn’t explode (like my greenish one), simply run a paring knife along the length of the fruit to cut it open. Only cut as deep as the peel is thick.

Then, slide your fingers under the peel; it will come right off: once cooked, that peel becomes super easy to remove

But hey, make sure you let your plantains cool for a while before you do that… you wouldn’t want to burn your fingers, now, would you? 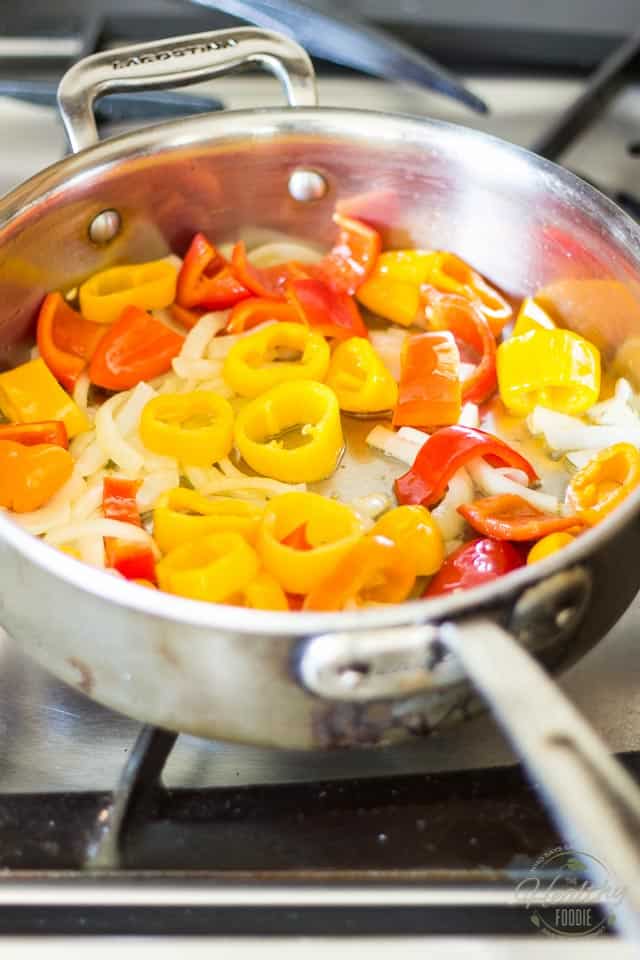 While the plantains are cooling, drain the water from the pan in which you boiled them and place it back over medium-low heat. Melt some coconut oil and then add some sliced onions and bell peppers to it; cook, stirring often, until the veggies are just softened and slightly fragrant, about 2 to 3 minutes. 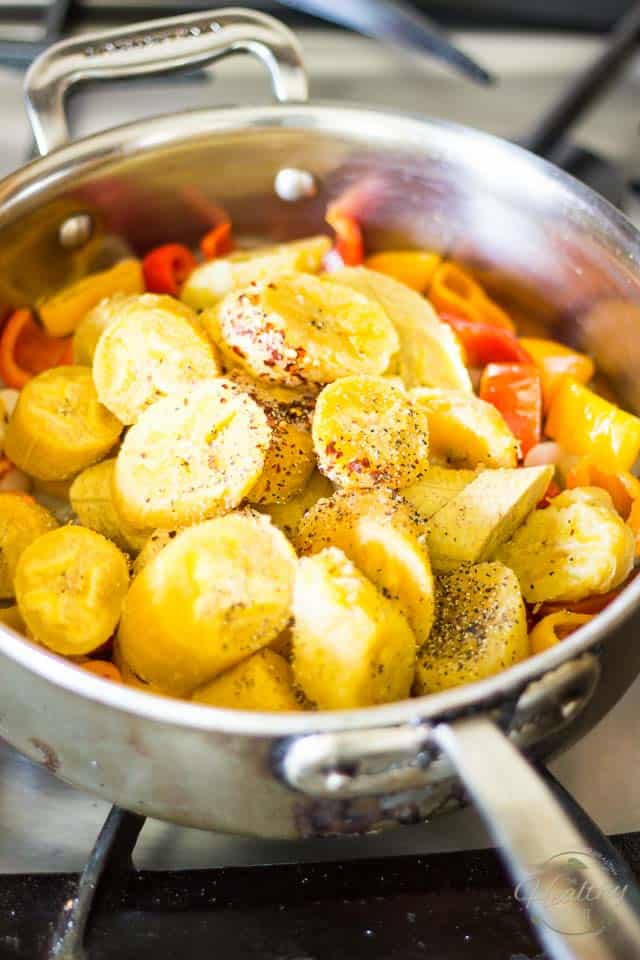 Next, cut the peeled plantain into 8 to 10 thick slices each and throw them in the pan with the onions and bell peppers. Add a bit of salt, pepper and chili flakes and then stir delicately.

Transfer this to a baking dish, pour in half a cup of coconut water, cover with foil and bake in the oven for 20 minutes. 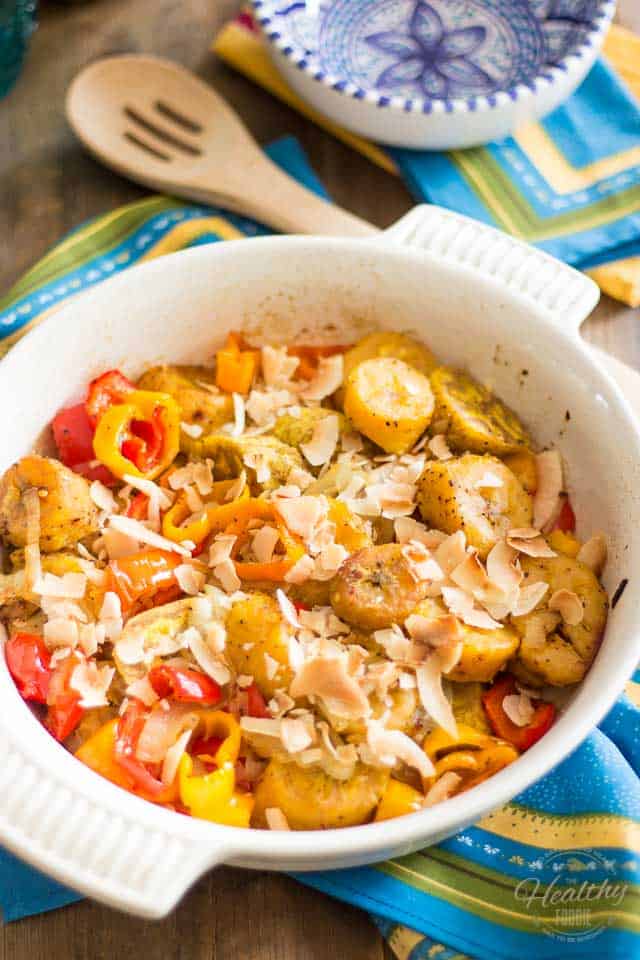 After that time, remove the foil, sprinkle with toasted coconut flakes (or plain unsweetened, if you can’t find toasted) and return to oven for about 10 minutes, or until the top turns beautifully golden.

By now, the house will smell absolutely amazing and you’ll be getting beautiful visions of white sandy beaches and deep turquoise oceans!

Serve this dish immediately, while it’s still nice and hot. If you’re not too sure what to serve it with, know that it goes particularly well with grilled chicken, or pan-fried white fish.

As for me, I think I would eat it on its own… just like that, right out of the baking dish. Because yeah, I love it THAT much, and I hope you do too! 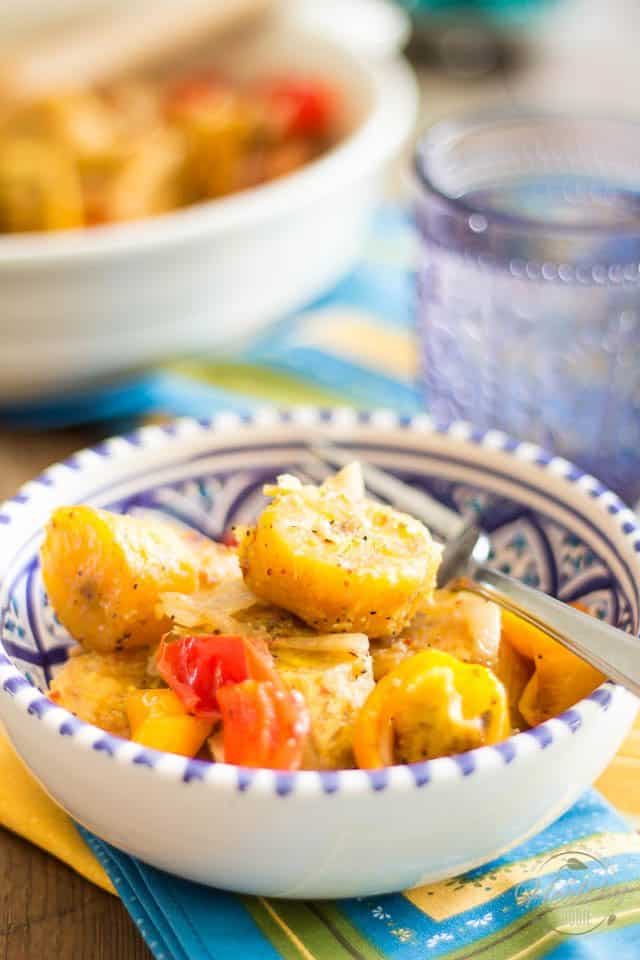 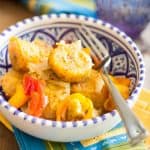