Lamb Kabobs with Apples and Dates 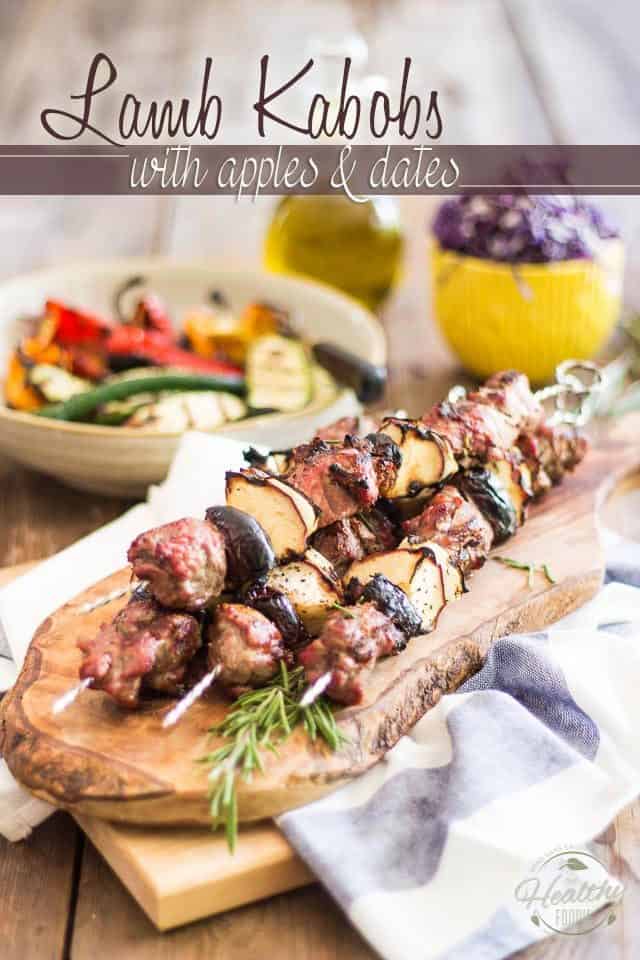 I’m not feeling all that great today. Actually, to tell you the truth, I’m sort of scared out of my mind. I suddenly find myself very uncertain as to what my immediate future will be like and I’m not too sure how to deal with this new reality of mine… I’ll have to take things one day at time, I guess!

I don’t want to bore you with the details, but let me at least give you a quick recap. Some of you might remember that I suffered a knee injury back in February of 2014 and, as a result, I had been forced to put my training on hold for a while. I then worked with a private coach who created personalized training programs for me while I was waiting for my MRI. With time, my knee eventually got better and stronger, to the point where I felt I was *almost* able to train normally. But, almost exactly a year after my injury, in February of this year, I was finally called in for my MRI. The results weren’t pretty: not only do I have a torn meniscus, as the doctor initially suspected, but I’m also suffering from a torn ACL, and that, from what I understand, contributed to the formation of a baker’s cyst somewhere behind my patella… regal, isn’t it?

Needless to say that an operation is in order! For some reason, that part went really fast, too fast even: I’m scheduled to go in this July 8. Yes, as in THIS COMING July 8. You wait a year just to get the MRI and then BOOM – surgery, just like that! 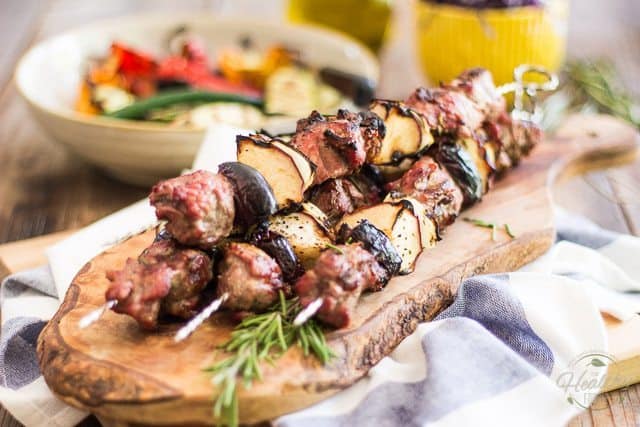 Anyway, I met with the orthotist yesterday because I need to have a custom brace (a bit like this one) made for me to wear after the operation. That much, I knew would happen and I didn’t really think much of it… until the doc told me that I would have to wear this darn thing every single day, from morning to bed time, for 6 entire months. After that, I’ll have to wear it every time I exercise for another 6 months. That’s ONE YEAR exercising with a stupid, bulky, ugly brace on my knee.

Of course, I’ll also have to be on crutches for 2 weeks following the operation and won’t be able to move my leg at all…

I am kind of devastated. I mean, I’m happy to think that a year from now, theoretically, my knee will be just like brand new, but in the meantime, I feel like my workouts, my entire lifestyle, will be taking a major hit. I’ve just started a new program and things are going really well, I’m feeling fantastic and enjoying my workouts very much… now this all comes to a halt and I am kind of at a loss as to what to do. I think my condition will be even worse off than it was when I initially got the injury. I’m not even sure how much exercise, if any, I’ll be able to do… I’ll have to wait and see what the doctor tells me.

As far as my “diet” is concerned, I guess I’ll keep doing what I’m doing now, emphasizing on eating lots of protein to prevent muscle loss, a fair amount of carbs to fuel my… to fuel my what? I’m not going to be working out… Argh. I hate that. Hopefully it won’t last too long and I’ll be able to start lifting heavy stuff again before my muscles even had a chance to realize that they were on forced sabbatical! 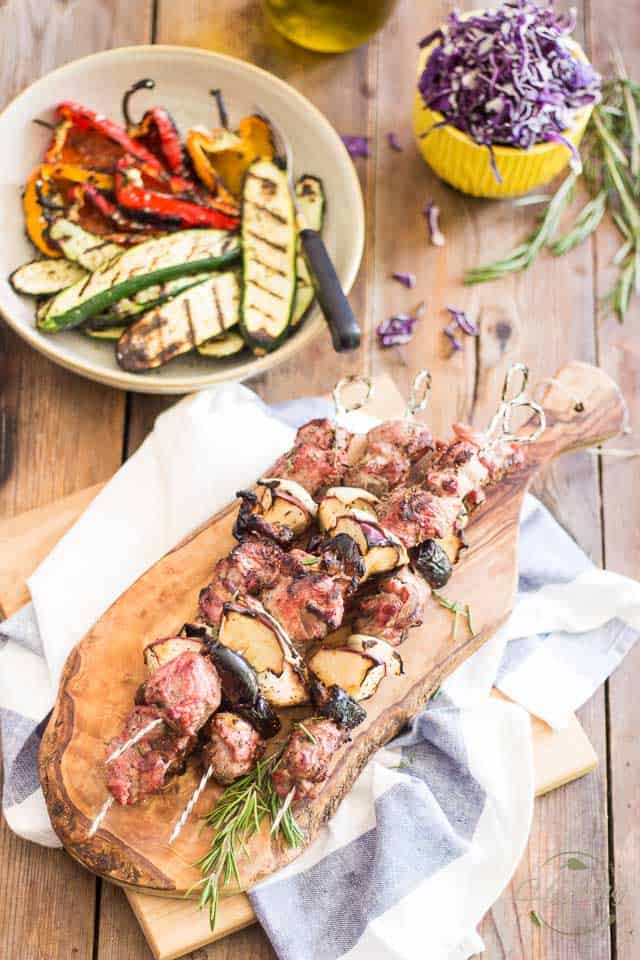 One thing I do know is I’ll keep eating good food like these Lamb Kabobs with Apples and Dates.

Hey, I think those would be absolutely FAN-TAS-TIC for Father’s Day, by the way… I mean seriously, can you think of anything more manly than pieces of meat threaded onto a skewer and cooked on the fiery grill? Aside from a mile-high hamburger, that is? I don’t think I can. Plus, kabobs are the ultimate party food, if you ask me. You can make as little or as many as needed, pile them onto a plate, drop them in the middle of the table along with a few sides of salads and grilled veggies and let people build their own plate and decide how much, or how little, they want to eat.

I just ADORE those kinds of convivial meals! 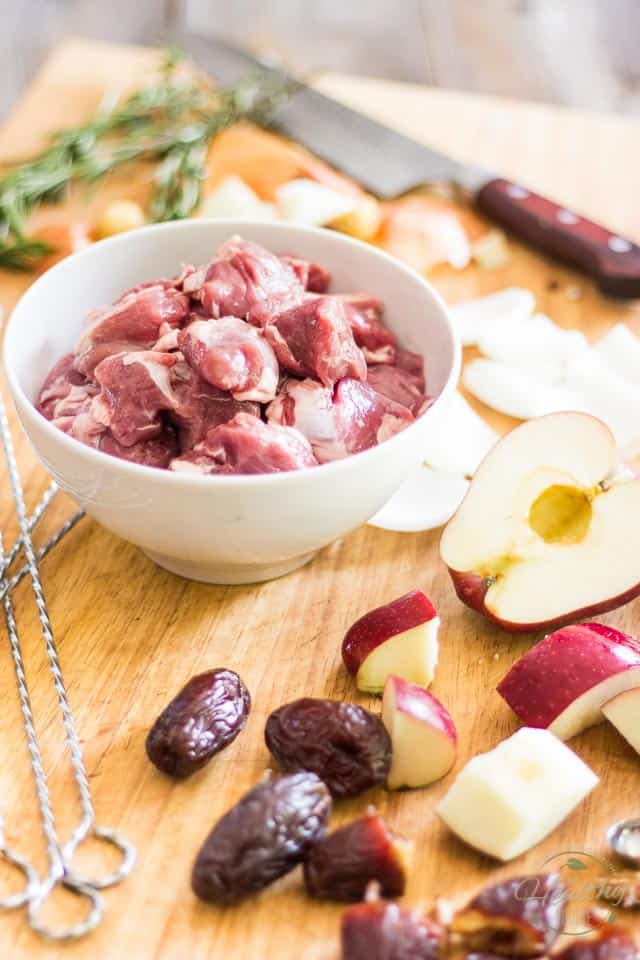 The first thing you need to do is preheat your outdoor grill to very high heat, like 550°F – 600°F. Oh, and if you’re using wooden skewers, make sure you soak them in water for at least 30 minutes before assembling the kabobs, else they will simply turn to ash on you…

Honestly, though, I used to be a big fan of wooden skewers, but that was until I invested [a very small amount of money] in a set of metal skewers. These things are so much easier to use; for starters, you don’t need to remember to soak them, they never break on you as you thread the goodies onto them and once cooked, your items will slide off almost effortlessly, so you never end up catapulting your food into whoever-happens-to-be-sitting-across-the-table-from-you’s plate, or face! Frankly, I think they make the whole kabob making / eating experience much more pleasant.

But enough talk about the skewers, let’s get down to the core of things: ingredient prepping!

Let’s begin with the meat: trim as much visible fat as you can from the lamb shoulder and then cut it into 36 cubes of roughly an inch each. Most butchers will gladly take care of that for you, though, or even have some ready-made cubes in the counter, so if you’re not too comfortable with cutting meat and stuff, don’t be afraid to ask.

Oh, and hey, if lamb is not your thing, feel free to sub beef, pork or even chicken… you’re not gonna hurt my feelings! 😉 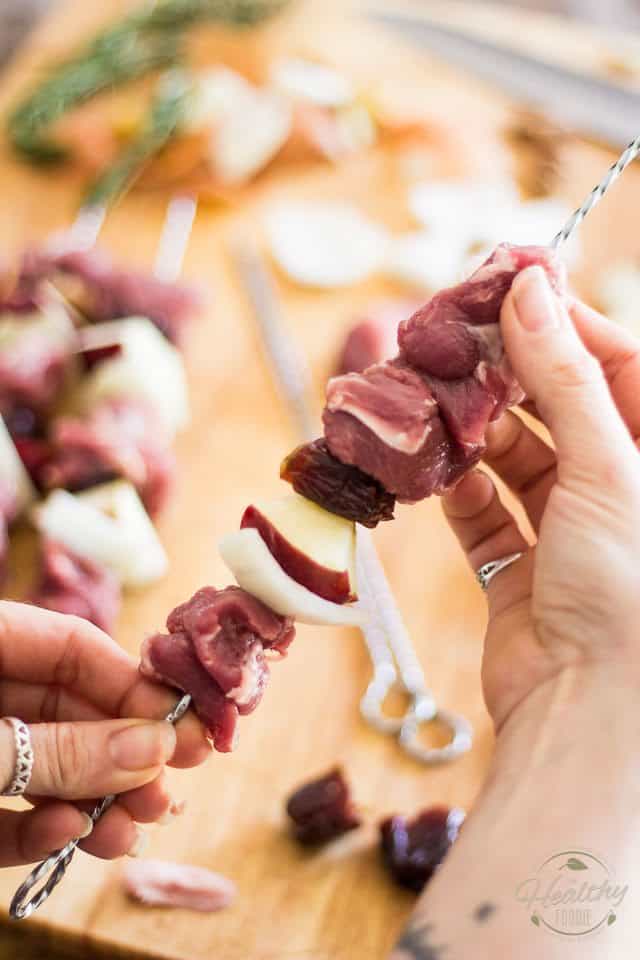 Once your meat is all good and ready, peel half an onion and cut it into 4 pieces crosswise; then separate the layers in order to get at least 12 good, large pieces in total.

Cut the apple in half lengthwise, remove the core and then cut each half into 6 pieces. The best way to do this is to cut it once lengthwise and then twice crosswise. About the apple, I chose to use a Red Delicious because it stays nice and firm even after being cooked, but you could very well use any other variety. The cooking time is fairly short, so I doubt that any of them would actually turn to mush…

Cut the Medjool dates in half crosswise (you’ll have to work your way around the pit) and then remove the pit by pulling gently on it. 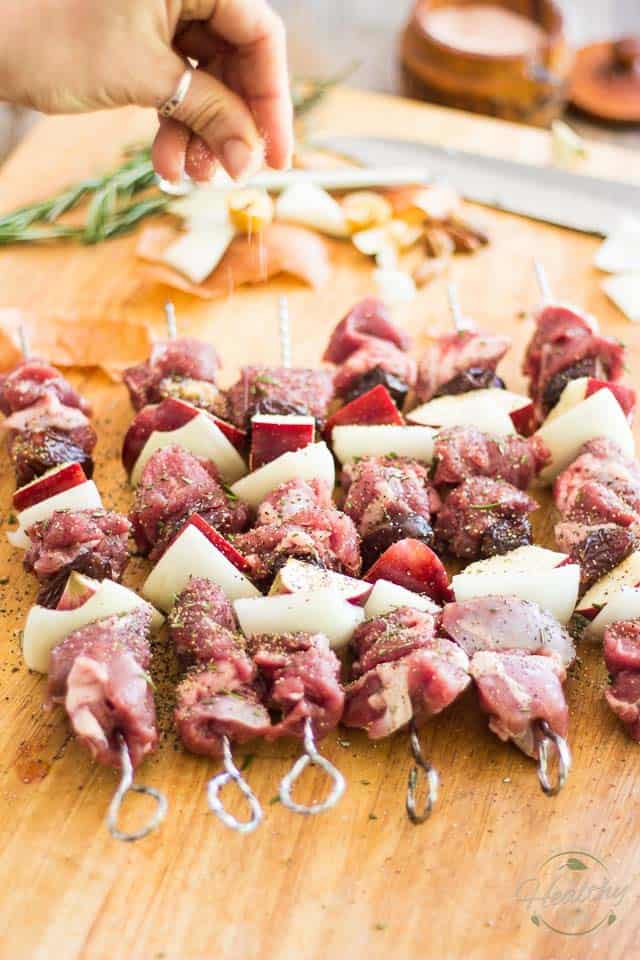 Sprinkle the finished skewers generously and on all sides with salt, pepper and chopped fresh rosemary and then place them on the hot grill.

Close the lid and let the kabobs cook undisturbed for about 5 minutes then flip them over and continue cooking for another 5 to 6 minutes, or until the meat is nice and golden brown.

Remove the kabobs from the grill, sprinkle them with more fresh rosemary, cover loosely with aluminum foil and let them rest for 5 to 10 minutes before serving.

That’s just enough time to throw a bunch of veggies, like zukes and bell peppers for instance, on the grill! 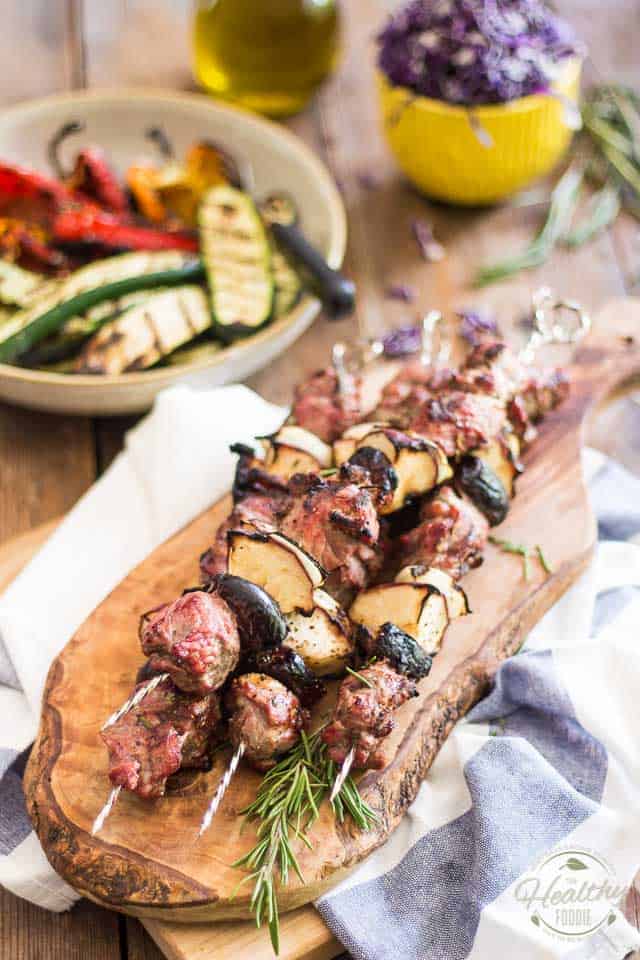 I’m telling you, these kabobs pack so much flavor, they’re simply gonna blow your mind.

And if you’re planning on serving them to guests, I would plan on at least 2 per person… just sayin’ you know! 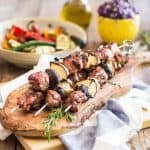 Lamb Kabobs with Apples and Dates

*If using wooden skewers, soak them in water for at least 30 minutes before using them.
Author: Sonia! The Healthy Foodie 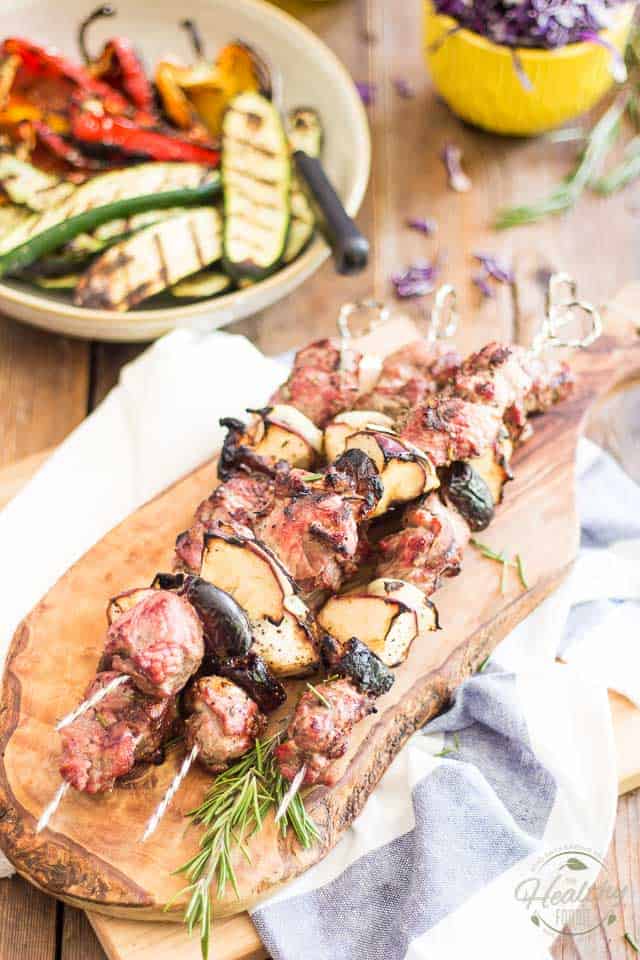 15 Comments on “Lamb Kabobs with Apples and Dates”