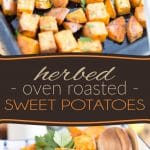 So delicious and easy to make, these Herbed Oven Roasted Sweet Potatoes deserve to be given a prime spot in your plate on a regular basis! And once you’ve given them a try, you’ll want to do just that, I swear… 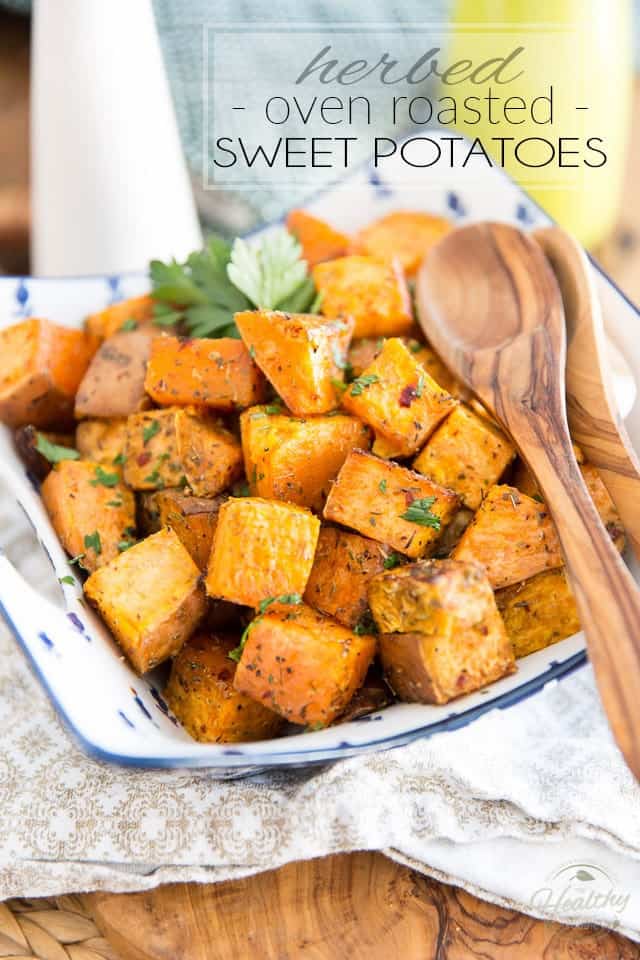 Today, I’m giving you a super easy recipe; the kind of recipe that barely even requires a recipe, but that’s so crazy delicious and easy to make, you’ll no doubt want to add it to your regular rotation. Indeed, these Herbed Oven Roasted Sweet Potatoes are so good, I’m absolutely positive that you, and the entire family, will deem them worthy of getting a prime spot on your plates on a regular basis!

And no, I’m not just saying that… I’m telling you… make them once, you’ll want to make them ALL THE TIME!

Did I tell you they’re super easy to make? And that they’re just as delicious as they are easy to make?  These guys, they’re crispy on the exterior, super creamy on the interior, and bursting with all kinds of amazing flavor. Personally? I think they’re better than fries, even… BOOM! I said it! 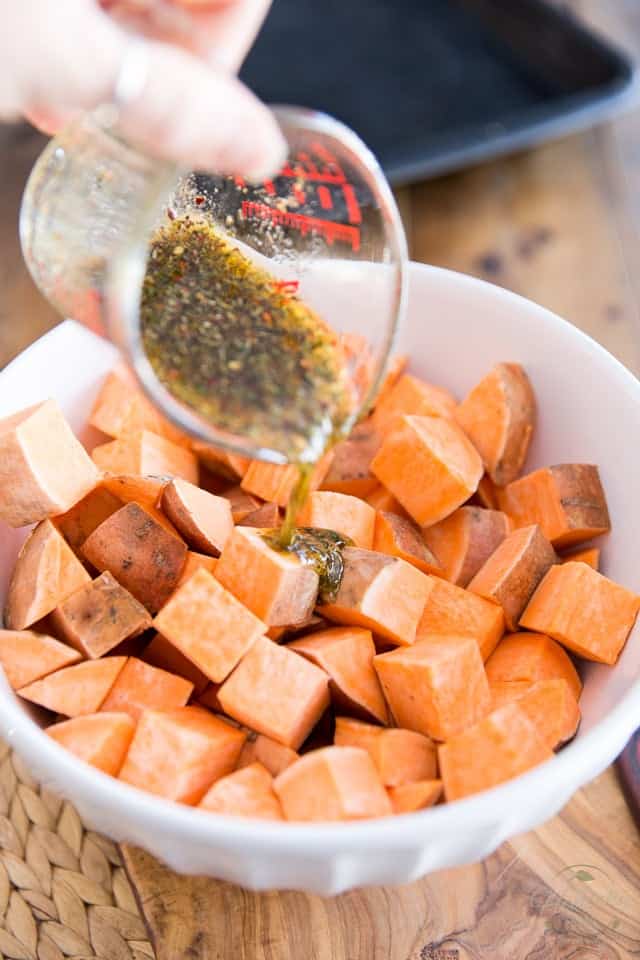 Preheat your oven to 400°F. Cut 2 beautiful large sweet potatoes into roughly 1″ chunks (no need to get your ruler out) and place them in a large mixing bowl. Then, combine some olive oil, dried oregano, salt, garlic powder, dried thyme and parsley, black pepper and a pinch of chili pepper flakes into a small measuring cup or mixing bowl and whisk vigorously with a fork until well combined; pour that right over the cubed sweet potatoes… 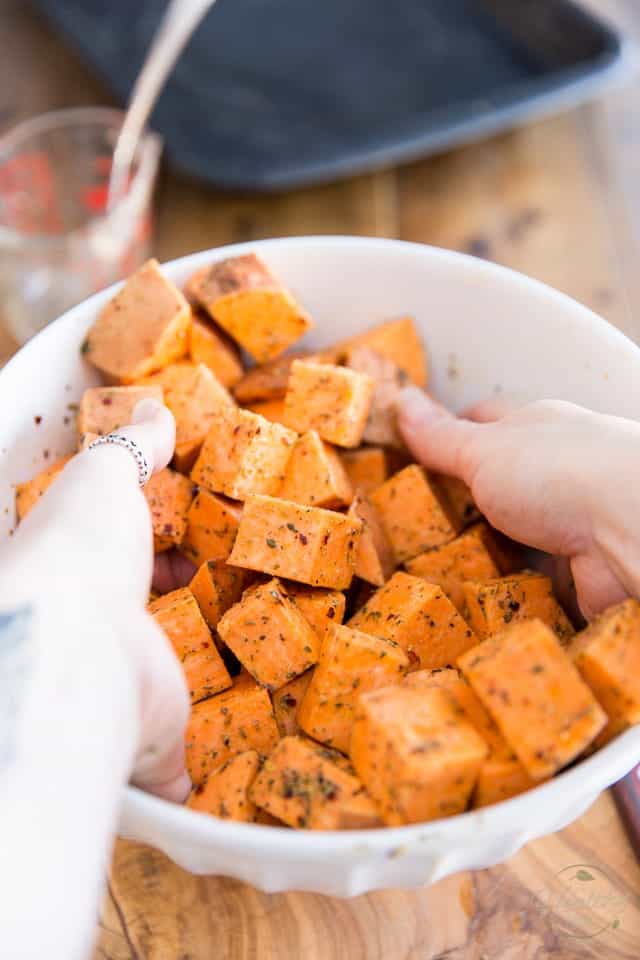 Toss gently with your hands (or with a large spoon, if you’d rather not get your hands dirty) until the potatoes are evenly coated. 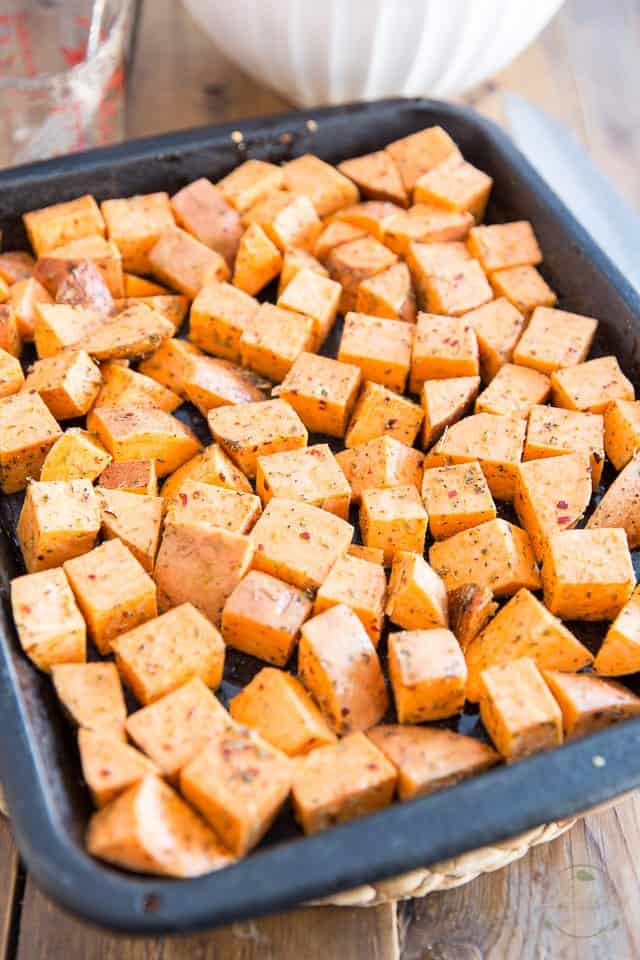 Arrange the sweet potatoes in a single layer onto a dark roasting pan. Be sure not to overcrowd the pan… your potatoes really have to be in a single layer and there needs to be a little bit of room for air to circulate around the tubers, too. Also, the reason for using a dark pan is because they are better at conducting heat and therefore, do a better job at browning and crisping up the potatoes.

However, if you didn’t have such a dark roasting pan, you could very well use an aluminum baking sheet instead but you may need to adjust your baking time slightly and live with the fact that your potatoes may not come out quite *as* brown and crispy on the exterior. And even then… nothing a few minutes under the broiler won’t fix! 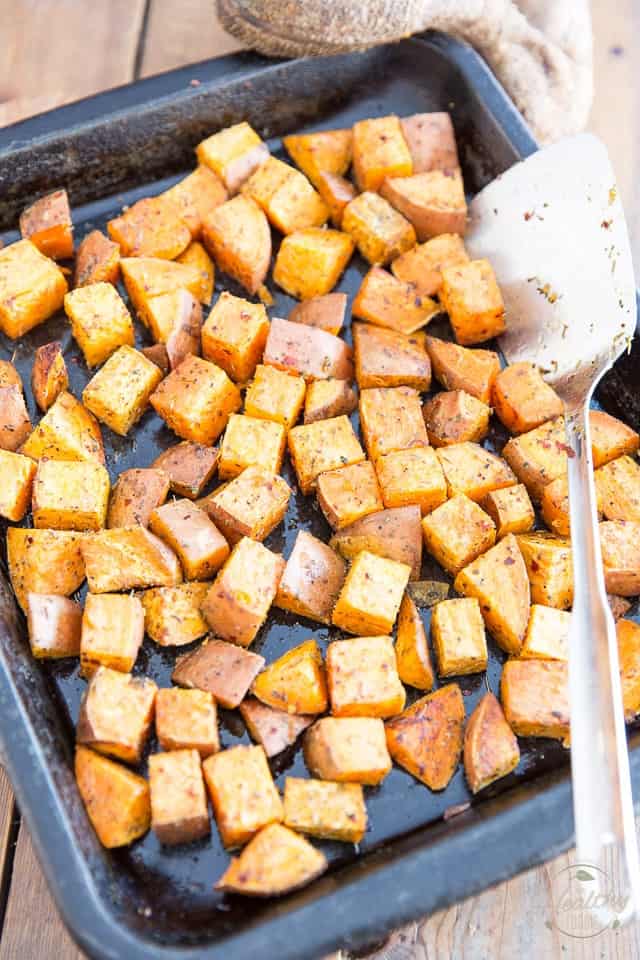 Bake your potatoes in the preheated oven for 35 to 40 minutes, or until they’re super tender and nicely golden brown; Do give your potatoes a quick stir about halfway through cooking. 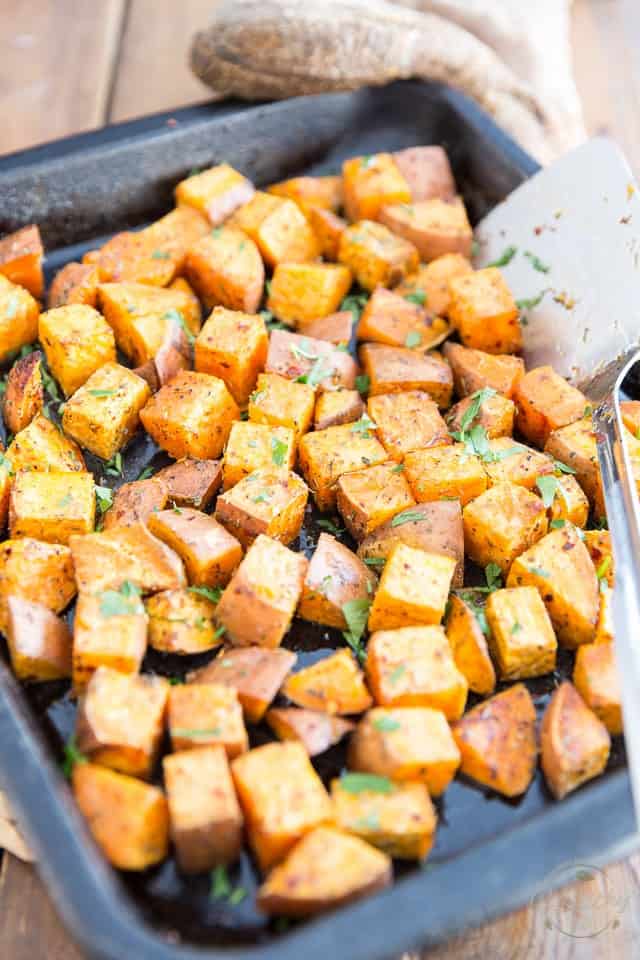 Now all that’s left to do is hit them with a handful of chopped parsley, if you are so inclined, and enjoy!

Oh, and one last thing… unlike French fries, these potatoes they reheat super well: simply throw them in a pan and reheat them over medium heat — they’ll be good as new! 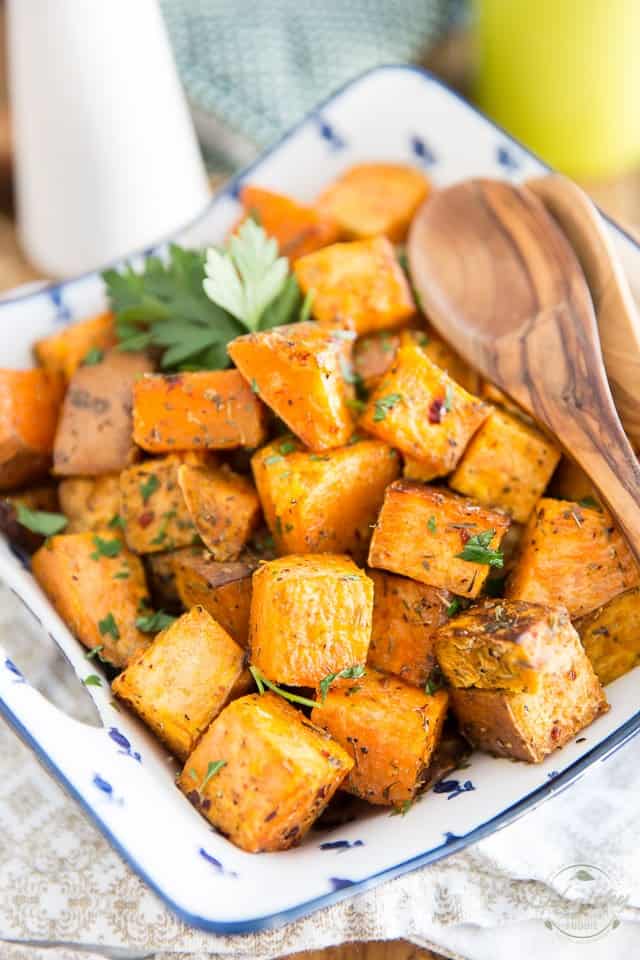 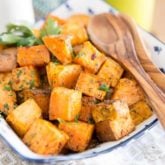 Prep Time: 5 minutes
Cook Time: 35 minutes
Total Time: 40 minutes
So delicious and easy to make, these Herbed Oven Roasted Sweet Potatoes deserve to be given a prime spot in your plate on a regular basis!
Servings: 4