I belong to that category of people who don’t really need convincing when it comes to Potato Salad. I’d be like, instantly, YES PLEASE! In fact, I don’t think I’ve ever met a potato salad that I didn’t like. Well, so long as it’s homemade, that is. I don’t care much for the commercial stuff that comes in plastic jugs and that usually feels like the potatoes haven’t been cooked all the way through. It has been ages since I’d last had some of that, but I still remember how yucky those crunchy potato bits felt in my mouth.

But for the most part, so long as the potatoes are cooked right and feel soft and creamy in your mouth, even once the salad has had a chance to chill, then I’m a HUGE fan!

Oddly enough, though, I’ve never been tempted to play much with potato salads. I’ve always pretty much made them the same “classic” way, with mayonnaise, celery and green onions, my ultimate favorite variation being my Warm Potato Salad with Creamy Goat Cheese and Crispy Bacon.

But now, I think that I just found me a new favorite… or a very, very close second! 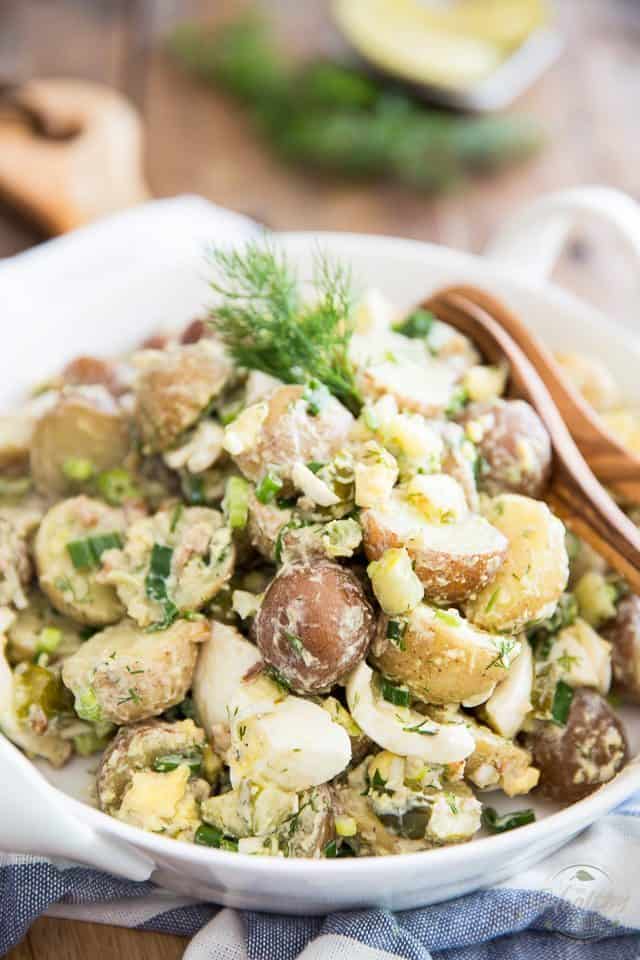 What I especially like about this particular “German Style” Potato Salad, other than its absolutely crazy taste and texture overload, is that you ideally want to eat it warm, so there’s no need to make it in advance. BUT, it’s equally delicious cold, so any leftovers can be eaten straight out of the ice box!

This salad only takes as long to make as the time you need to cook the potatoes, plus about 10 minutes so they have a chance to cool down some.

While your potatoes are cooking, you can work on prepping the rest of the required ingredients. Well, unless your preferred technique for hard-boiling eggs involves them sitting for an extended period of time, in which case you might want to start with your eggs and do the rest of the prep work while the eggs are happening… 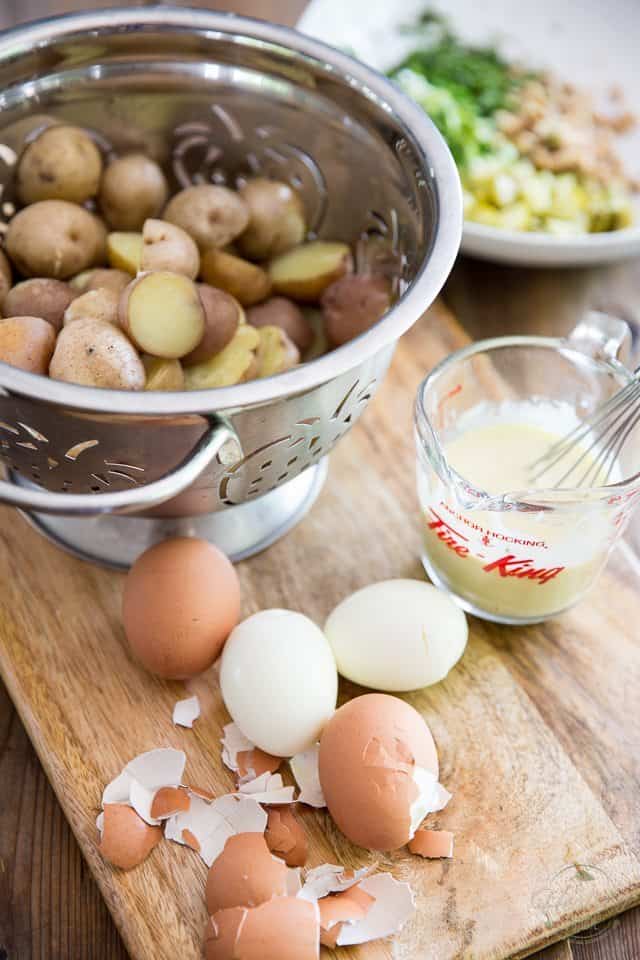 Otherwise, you want to start by cooking the potatoes in plenty of salted water until they are fork tender, then drain them and let them cool at room temperature for about 10 minutes.

While that’s happening, hard cook the eggs using your favorite method, then cool them slightly under cold running water, peel them and cut them in 8. (like I said before, though, if your favorite method involves letting the eggs sit for an extended period of time, then you might want to start with that instead…) 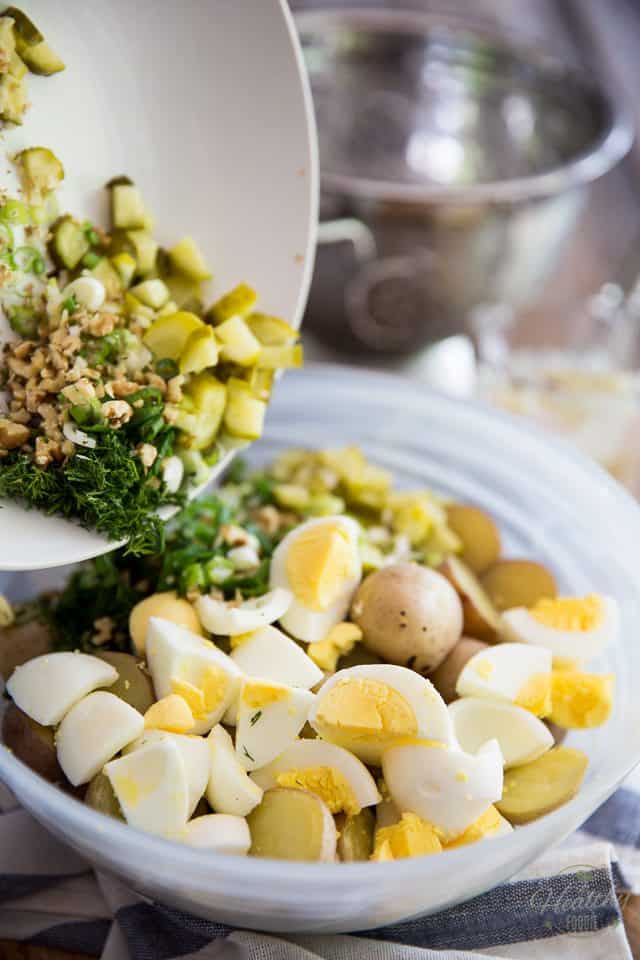 Once everything is good and ready to go, combine the cooked potatoes, hard boiled eggs, chopped green onions, dill pickles, walnuts and fresh dill in a large mixing bowl.

I know, it may sound weird, but trust me, the combination of flavors totally works! 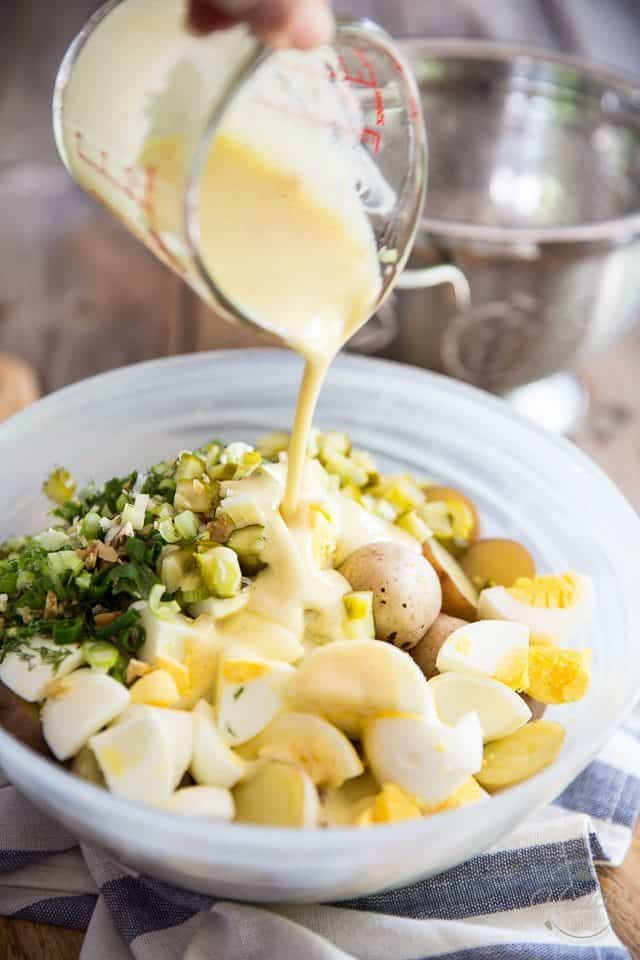 Pour your beautiful, creamy dressing all over the salad… 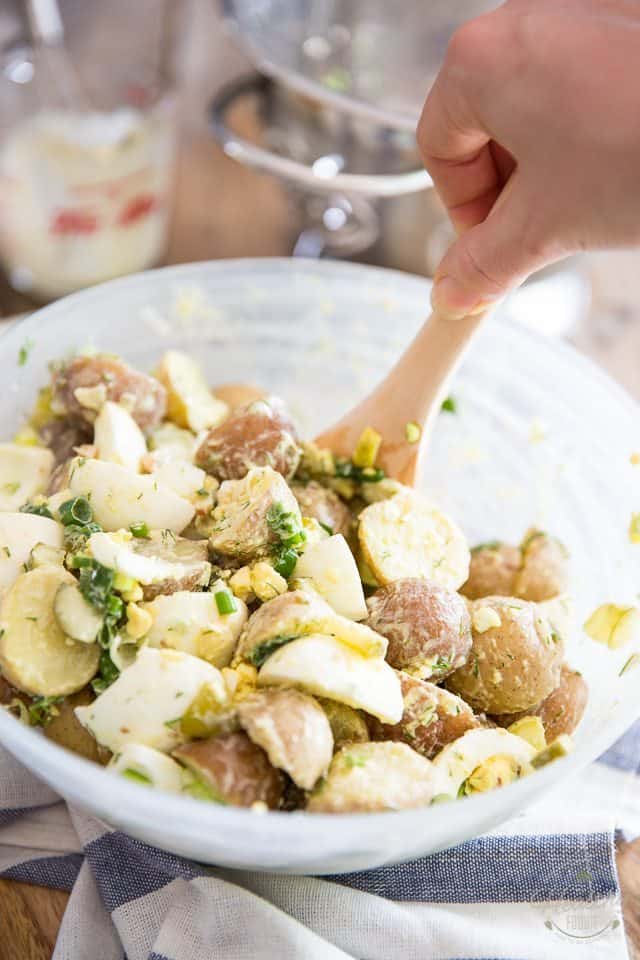 Ideally, you want to eat your Potato Salad right away, while it’s still warm, but since it’s equally delicious after it’s had a chance to chill completely, ultimately, the choice is yours…

Perhaps you should make a double batch, so you get to enjoy the best of both worlds: have some now, while it’s still nice and warm, and enjoy the chilled leftovers tomorrow! 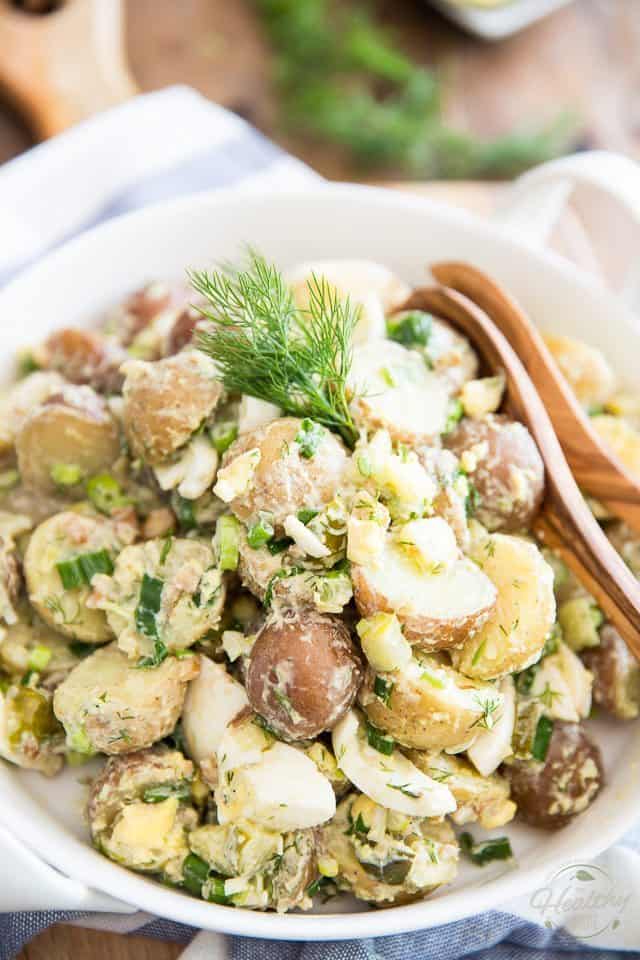 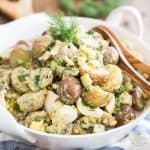 Prep Time: 15 minutes
Cook Time: 10 minutes
Total Time: 25 minutes
This Potato Salad EXPLODES with flavors and textures, and is equally delicious served warm or cold, which means you can make it fresh or ahead or time.
Servings: 6