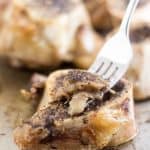 This was my first time ever having Roasted Bone Marrow. Frankly, I had ZERO idea what to expect.

All I knew is I had to try it, because well, it’s allegedly the highest, bestest, supremest brain food that is available out there, it’s super nutrient dense, does absolutely awesome things for your body and yadi yadi ya. Plus, well, I had some in the freezer from my previous beef order. Now it was either me who was gonna get it, or the dogs.

While doing a little bit of research on the subject, I happened to learn that, apparently, this would be Anthony Bourdain’s dish selection for his last and ultimate meal.

Uhm, I thought to myself. Surely, if a man deems this dish worthy of having as his final meal, then it has to be some kind of undervalued treasure, an exquisite delicacy of some sort. Or at the very least, a more than acceptable fare…

All that information was more than enough to convince me that I NEEDED not only to try bone marrow, but I needed to LIKE IT.
And so began the great Roasted Bone Marrow experiment… 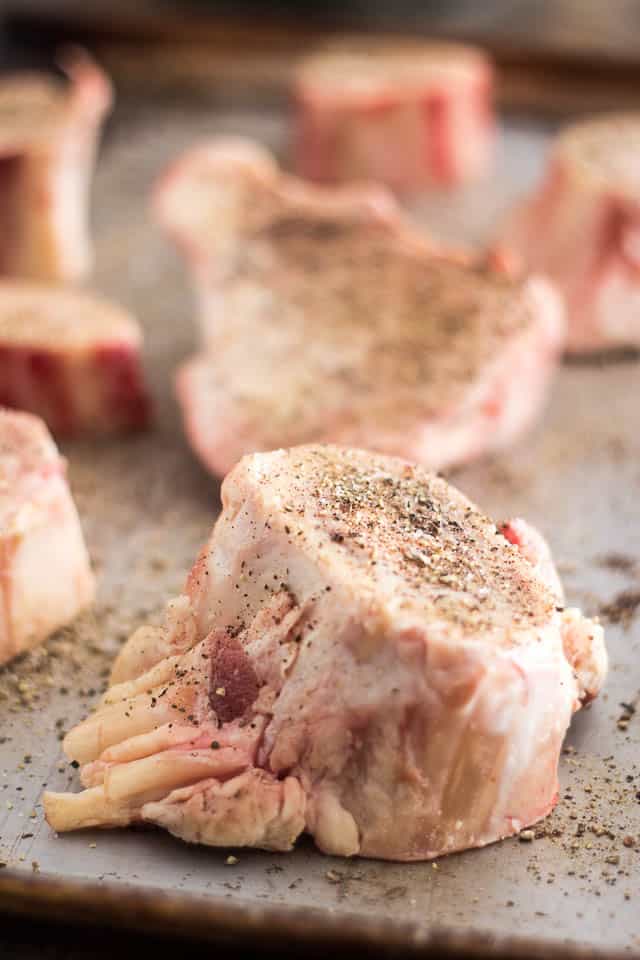 It is said that one should try and select bones that are fairly large with big thick tubes of marrow. And they shouldn’t be too tall either, because then it would make it really hard to get all of that precious marrow out.

Of course, one could always get their butcher to slice them in half for them. Or one could also get the long, narrow bones that usually come pre-sliced. 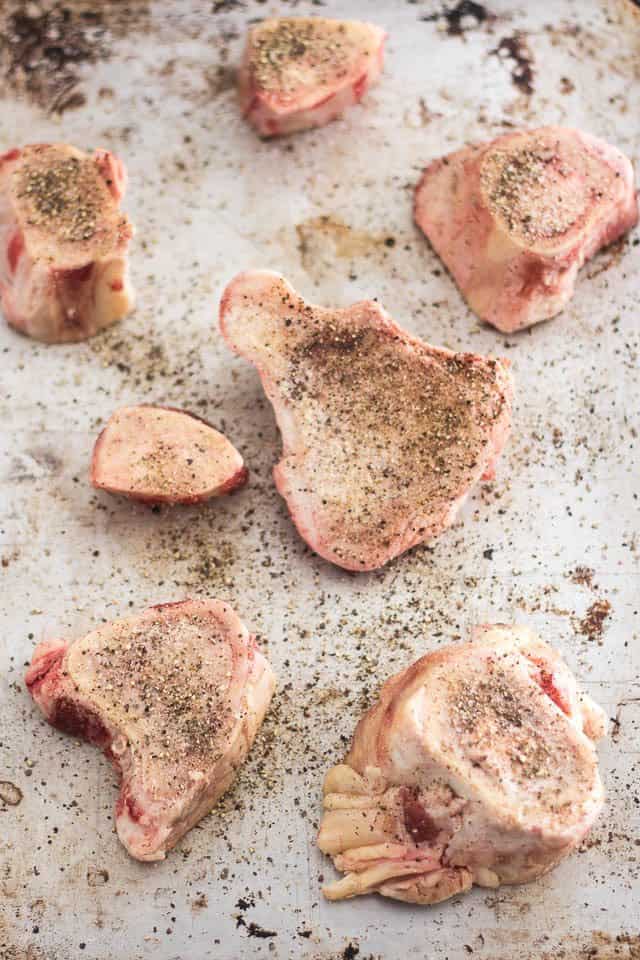 Sprinkle the bones generously on both sides with salt and pepper and set them on a baking sheet. Some fat will leak out during cooking, so make sure that your baking sheet has a little bit of a rim to it ‘cuz you wouldn’t want to lose a drop of that precious fat!

That, or, you wouldn’t want it to end up at the bottom of your oven, now would you? 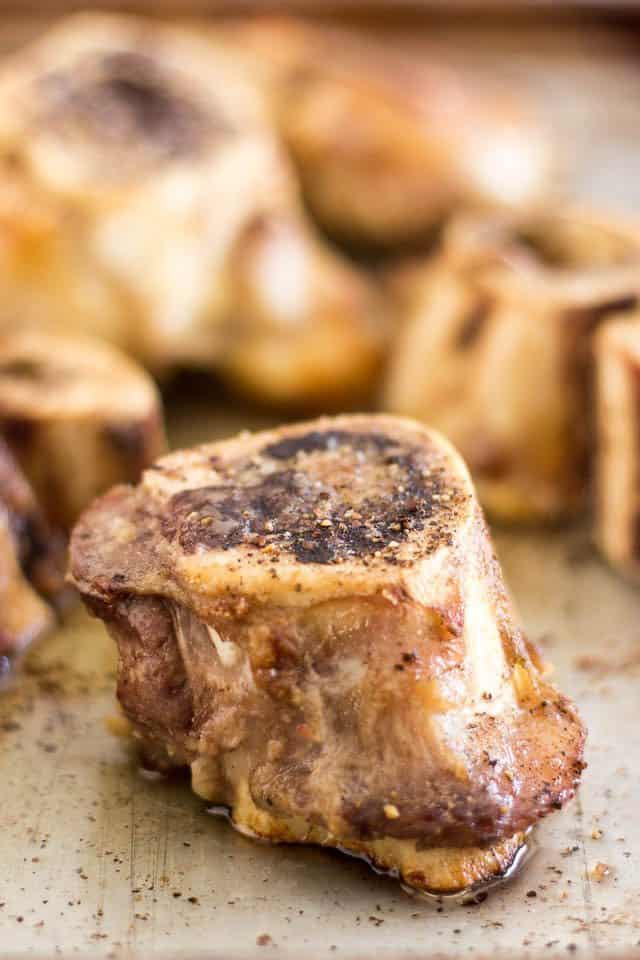 The bones need to roast at a fairly high temperature, for about 10-15 minutes, depending on thickness.

You want to take them out of the oven when they get nicely crispy and golden and the marrow becomes soft and starts to bubble a little bit. Be careful not to overdo the cooking, or your marrow will end up completely melted down. The marrow, when done roasting, should be enjoyably warm but not exactly hot. 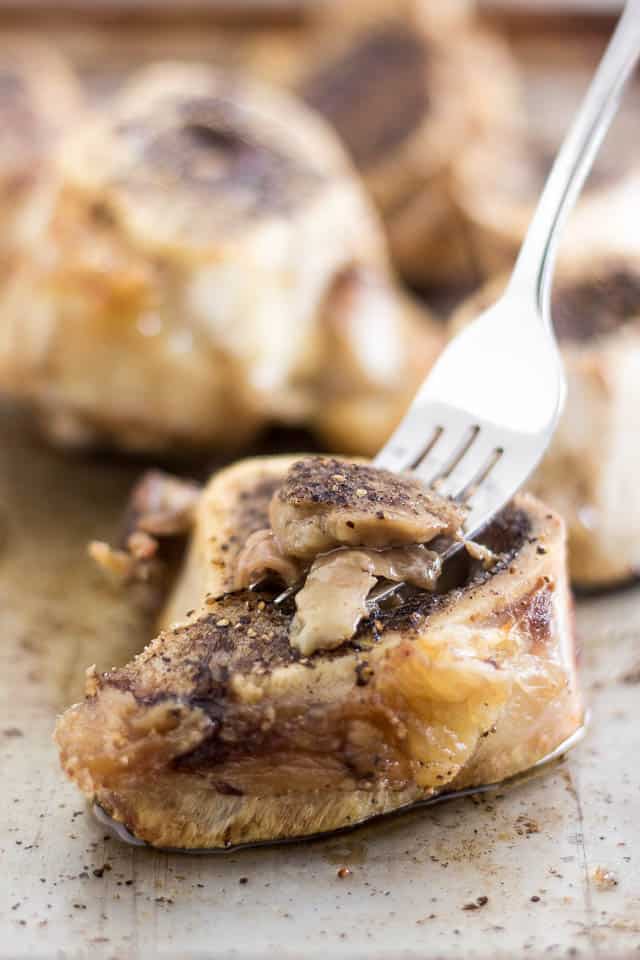 It has a soft, slightly gelatinous, fatty, creamy texture… uhmmmm, my fork seems happy, but my mouth is really not sure.

I can’t say that I was really looking forward to tasting it, but hey, after I’d gotten this far, I wasn’t about to back out.

So I took the fork to my mouth. Hmpft. It has a soft, slightly gelatinous, fatty, creamy texture… and a taste that I really couldn’t describe. Seriously. I cannot find a single word.

Still, I tried another bite but that was the end of this experiment for me. Oh, I’m not saying that I’m totally giving up on the idea of eating / liking bone marrow. I’m saying that it’s probably an acquired taste. One that I WILL acquire. Only not today.

For the time being, we will be putting these bones to good use and still benefit from all of the marrow‘s super powers by turning it into a luscious broth.

Oh, but by all means, if YOU have acquired the taste already and enjoy eating Roasted Bone Marrow, do yourself a favor and go to town before you go through with the following steps! 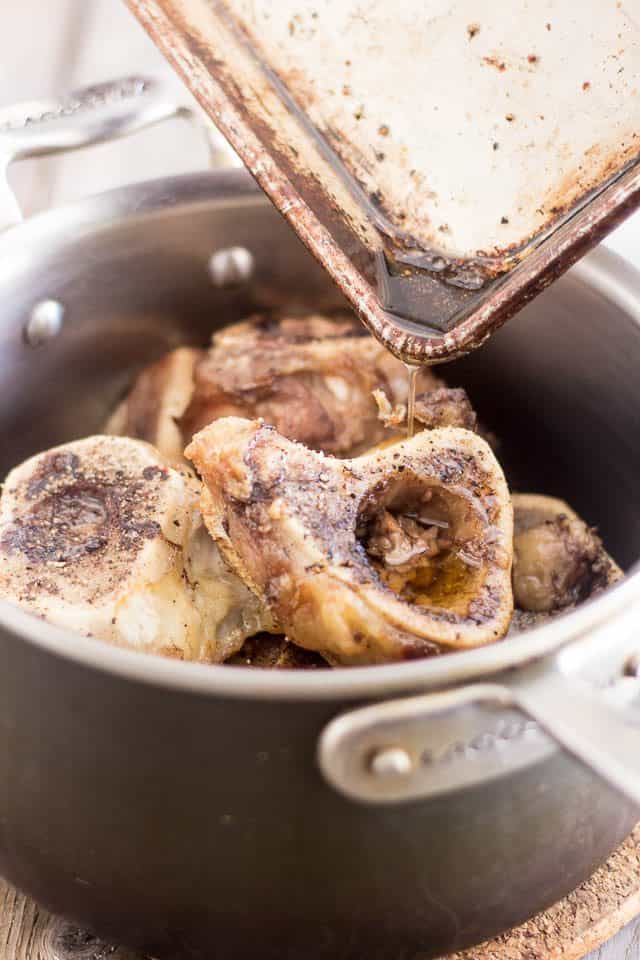 Dump all of your Roasted Bones into a large saucepan or stockpot. Don’t forget all the precious fat that’s at the bottom of your baking sheet!

That’s liquid gold for ya… and flavor galore right there! 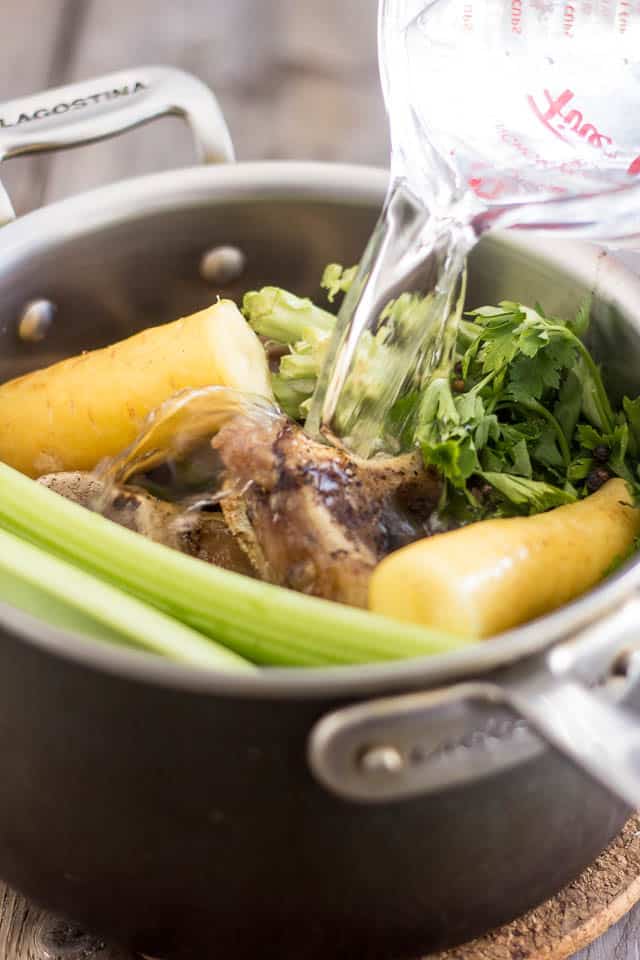 Throw in the rest of the ingredients, namely salt, pepper, pickling spice, a carrot that you’ve broken into 2 or 3 pieces, a celery rib which has been given the same treatment, an onion, skin and all, cut into quarters, a few cloves of garlic and a handful of [not so fresh anymore as you can see] parsley 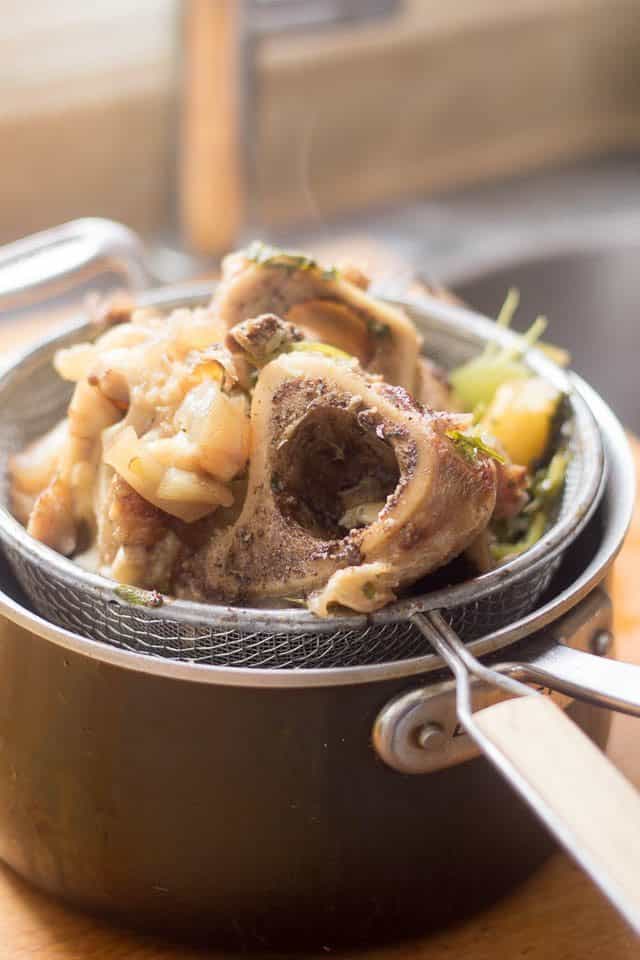 After 60 to 90 minutes of simmering time, you will want to strain your stock through a fine mesh sieve, then let it sit for a few minutes, just to make sure that you get every last drop of stock out of this.

Notice how all the marrow has disappeared, leaving nothing but a gaping hole in the center of that bone? That’s a good thing. It means that it’s now IN your broth. 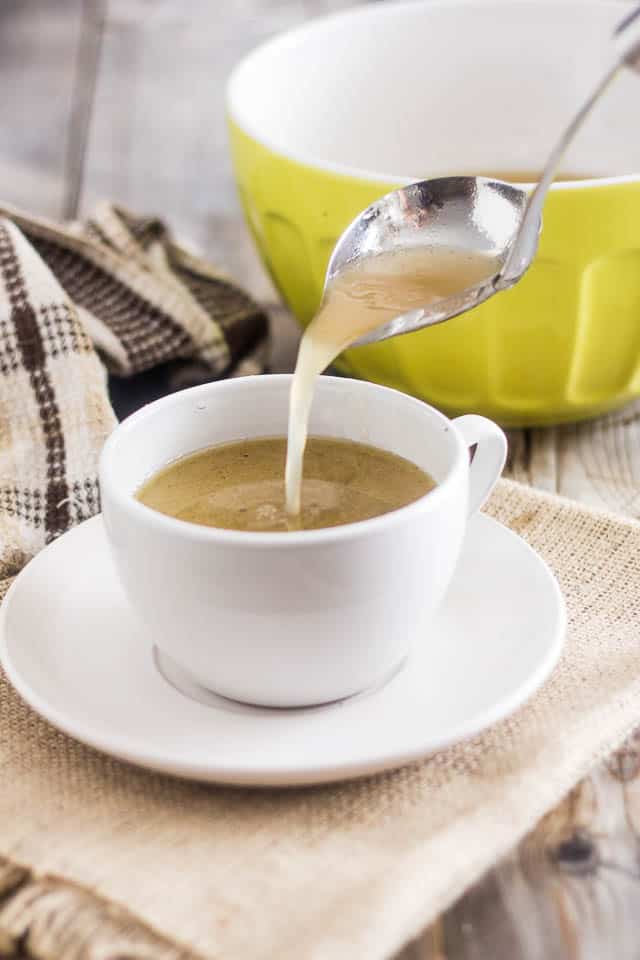 Now for the taste test…

It smells fantastic, I can already tell you that much. But let’s pour ourselves a nice cup of that delightful warm broth.

Now THAT, I like! It has a bold yet very mild and even delicate flavor to it, if that’s even possible… and in the mouth, it really feels super smooth and silky. This will be a very good way for me to make friends with the flavor of Roasted Bone Marrow.

Then we’ll start working on texture. And in the event that texture and I never see eye to eye, at least I know I have this alternative that I can resort to. 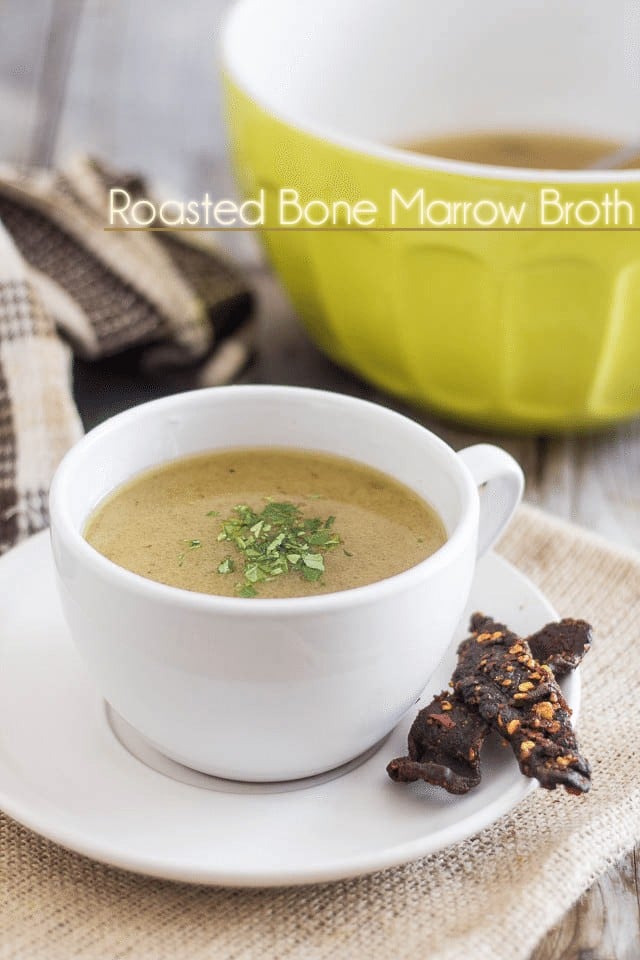 Served with a few pieces of Home Made Beef Jerky, this broth makes for a delightful, tasty and satisfying mid-afternoon snack.

But of course, you can very well use that broth in your favorite soups and various recipes. On that idea, I am completely sold. From now on, I can guarantee that I will choose Bone Broth over Chicken Stock any day. Without so much as a moment’s hesitation!

Although someday, hopefully, that Marrow will be long gone before the bones make it to the stockpot. 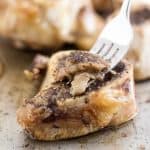 Prep Time: 10 minutes
Cook Time: 2 hours
Whether you are looking to roast Marrow Bones to consume as a meal or whether you are wanting to make bone broth out of them, this post has you covered!
Servings: 4 cups

For the Roasted Bone Marrow

For the Bone Broth

To make the Roasted Bone Marrow

To make the broth

You can also make bone broth SUPER easily in a slow cooker. Here’s how!

Still not sure about bone broth? Read this in-depth guide to all the benefits

posted by Sonia! The Healthy Foodie on February 6, 2014