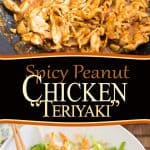 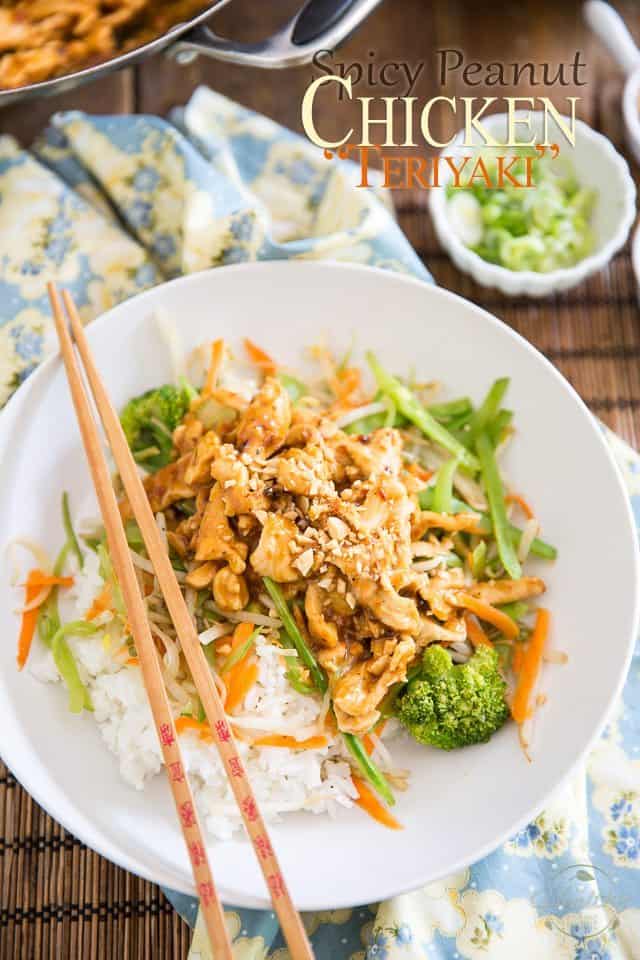 I know I just I said in my previous post that I tried to avoid eating Asian food at restaurants and usually preferred making my own at home, but Japanese food may be a bit of an exception to that rule…

Sushi, for instance, is something that I won’t do at home because I find it to be way too tedious and complicated. Plus, it often ends up costing a fortune because of all the different ingredients that one needs to buy if they’re gonna make their own AND have a little bit of variety on their plate.

There’s also this healthy Japanese fast food chain that goes by the name of Teriyaki Experience that I like to visit from time to time. They cook their food with water, as opposed to oil, and their signature dish (which is the one I eat all the time) consists of fresh vegetables and lean pieces of meat served over a bed of calrose rice.

I think that so long as you stay away from their signature teriyaki sauce, which they systematically offer to drizzle all over your dish (and very liberally might I add), their food is a fairly safe and healthy option. But passing on that sauce also means giving up on a lot, and I do mean A LOT of flavor. 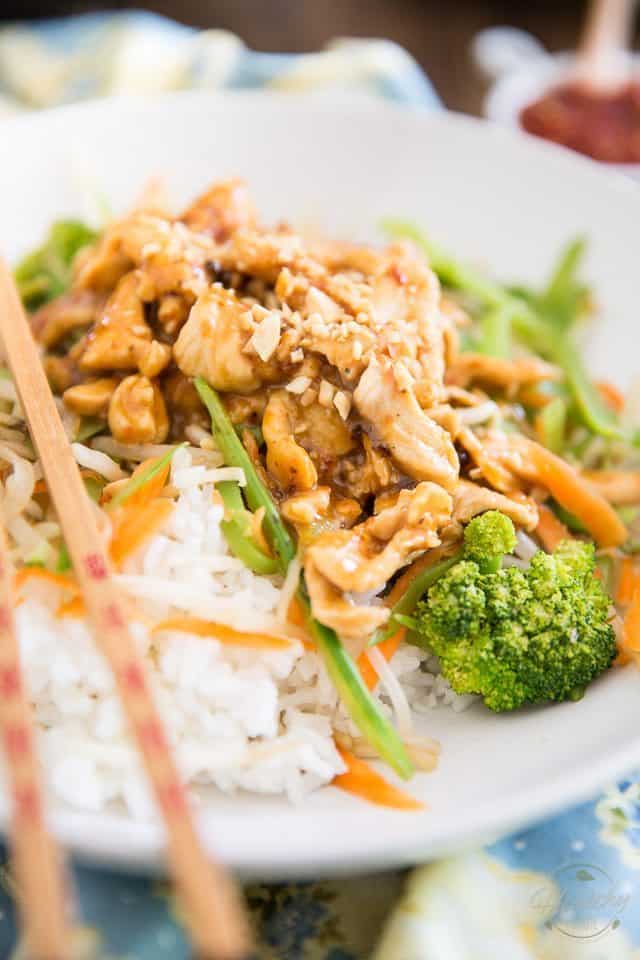 The fact that I tend to pass on that sauce most of the time is precisely what inspired me to come up with this Spicy Peanut Chicken Teriyaki recipe. I figured that I would not only try and replicate the dish that I love so much, but also create a super tasty AND healthy sauce to go with it.

Let me tell you, this homemade version I just came up with is so crazy delicious, I think I just found me a new favorite and suddenly may not feel the need to visit that food joint as often as I did. Indeed, this one boasts an UNBELIEVABLE amount of flavor and tastes like a million times better than the original, even when said original is drenched in teriyaki sauce.

Without a doubt, the generous amount of homemade peanut butter that I added to my sauce plays a very big role in giving it such an exquisite flavor. However, I totally trust that you could just as easily sub cashew butter or even almond butter without making so much as a dent to its amazing and complex flavor profile. 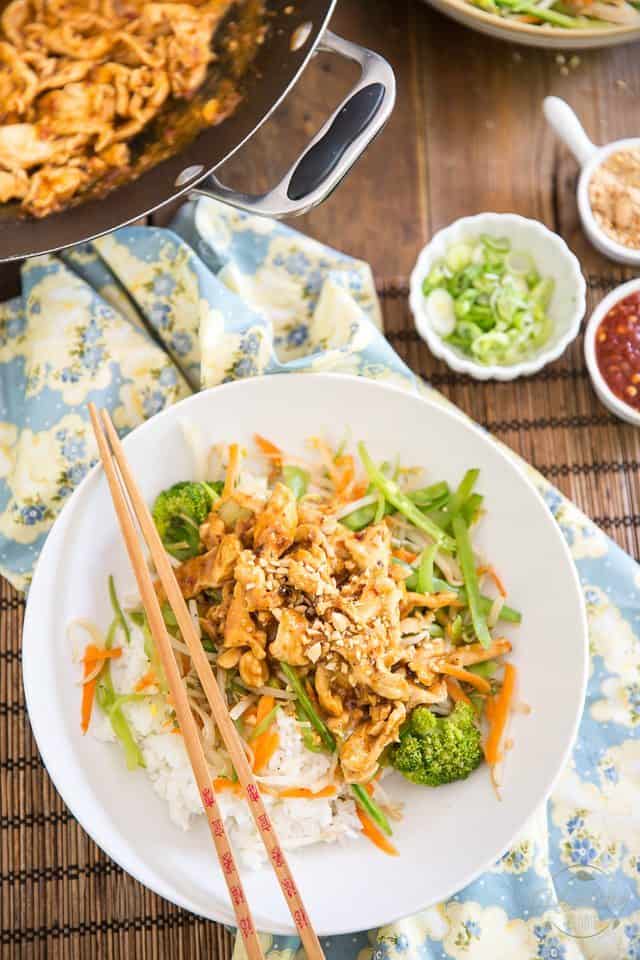 Also too, I decided to add the calrose rice to the recipe and to include it when I calculated the nutritional information, because I personally see it as an intrinsic part of the dish. However, if you yourself don’t eat rice, or don’t care for it, feel totally free to leave it out… I’m absolutely positive that the dish will be just as good without!

If you are planning on using the rice, though, this is the very first thing you’re gonna want to tackle. Measure out a cup of dry calrose rice and cook it according to the instructions on the package, or according to your favorite method!

If you’re anything like me, you probably have your favorite method and barely ever follow the instructions on the package when making rice… 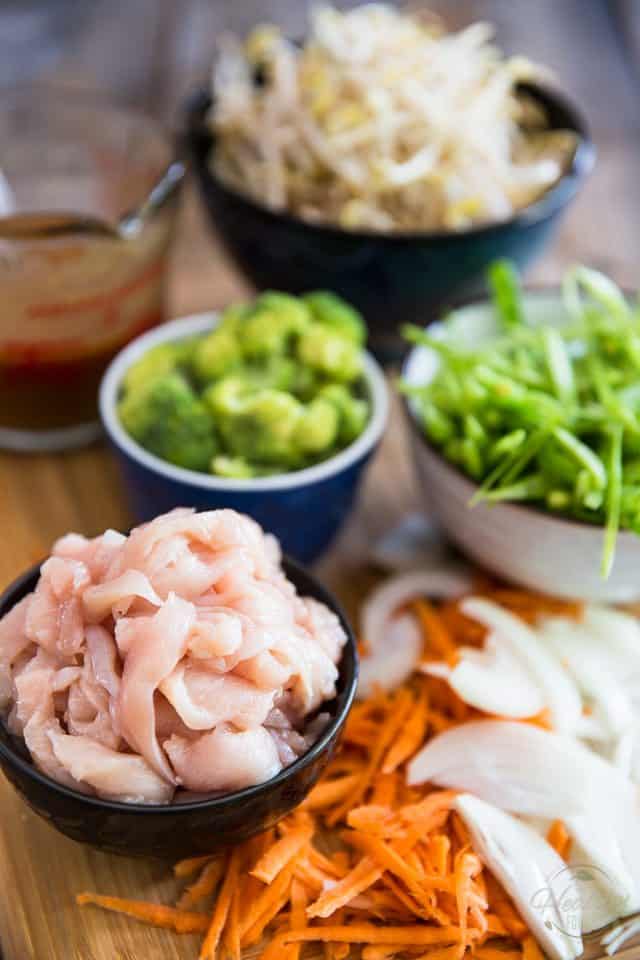 Then, while (and if) the rice is cooking, prep and chop all your ingredients.

The only REALLY important thing here is to make sure that your chicken is sliced super thinly: you want it to cook almost instantly! Use a really sharp knife and go as thin as you can!

Finally, the last thing you need to do before you start is make that delicious sauce. To do that, simply combine all the ingredients in a large glass measuring cup and whisk vigorously until everything is smooth and well combined. 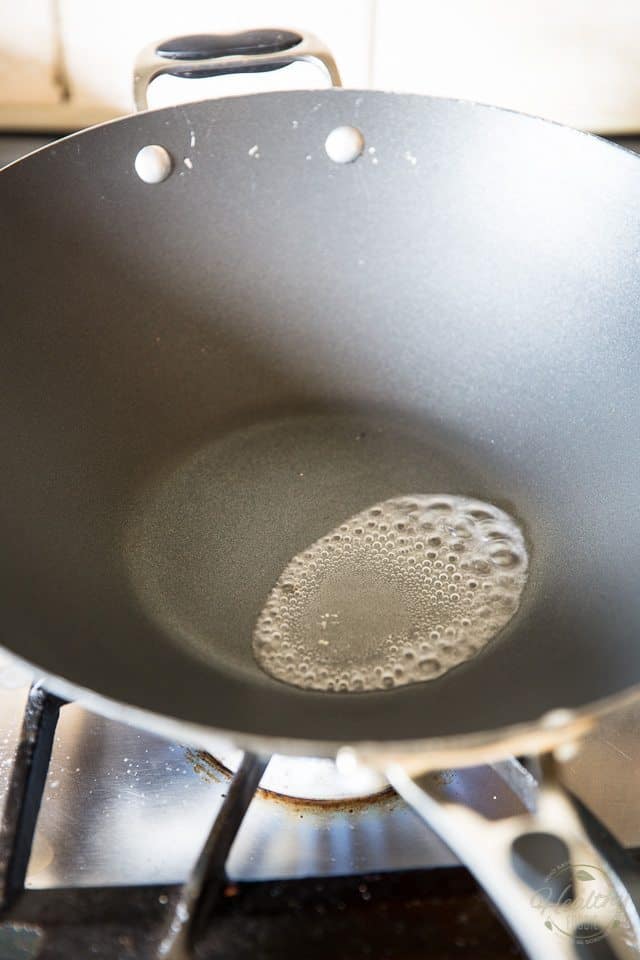 When you’re good and ready to go, heat a large wok or skillet over high heat. When your pan is nice and hot, add a few tablespoons of water to it.

That’s right, water! Since we’re not looking to color the meat at all, we’re not gonna be needing fat. The water will help in adding moisture and also prevent the chicken from sticking. 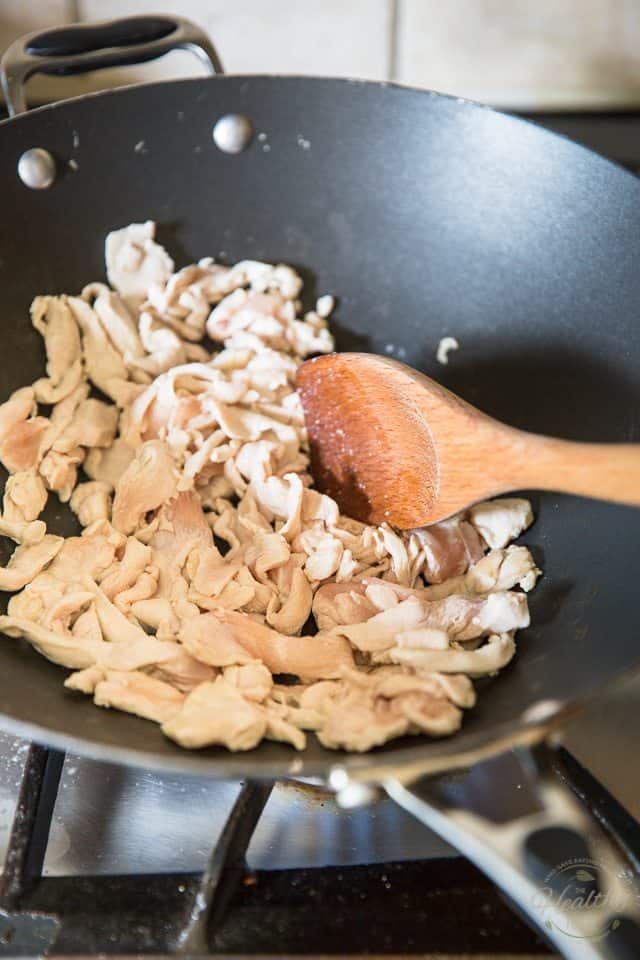 Immediately throw in all of the sliced chicken and cook it, tossing it around with a wooden spoon, until it gets completely opaque, about 2 to 3 minutes. 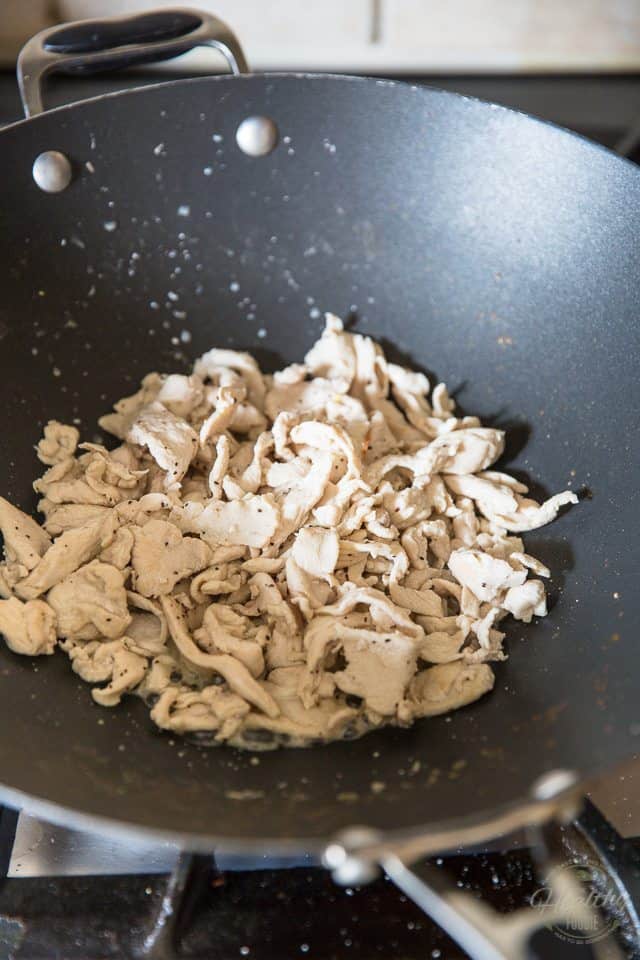 Like I said earlier, we’re not looking to brown the meat at all; as soon as it’s no longer pink, it’s ready.

Sprinkle your chicken generously with salt and pepper, toss and then transfer it to a shallow bowl. 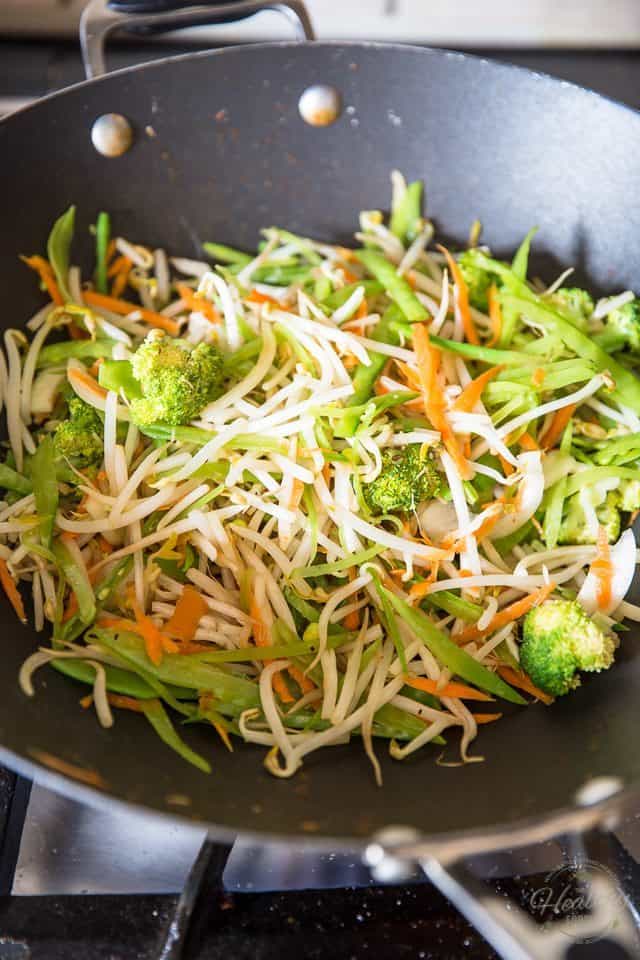 Return your wok to the heat source and then add the vegetables to it, all in one go. Sprinkle with a generous pinch of salt and saute the veggies for about 1 minute, until they are just slightly softened and fragrant. Be careful not to overcook your veggies. You want them to retain a little bit of a crunch!

Transfer your cooked vegetables to another shallow bowl and reserve. Whatever you do, don’t put them together in the same bowl with the chicken; they need to be in their own separate bowl or plate since the chicken will eventually be returning to the wok. 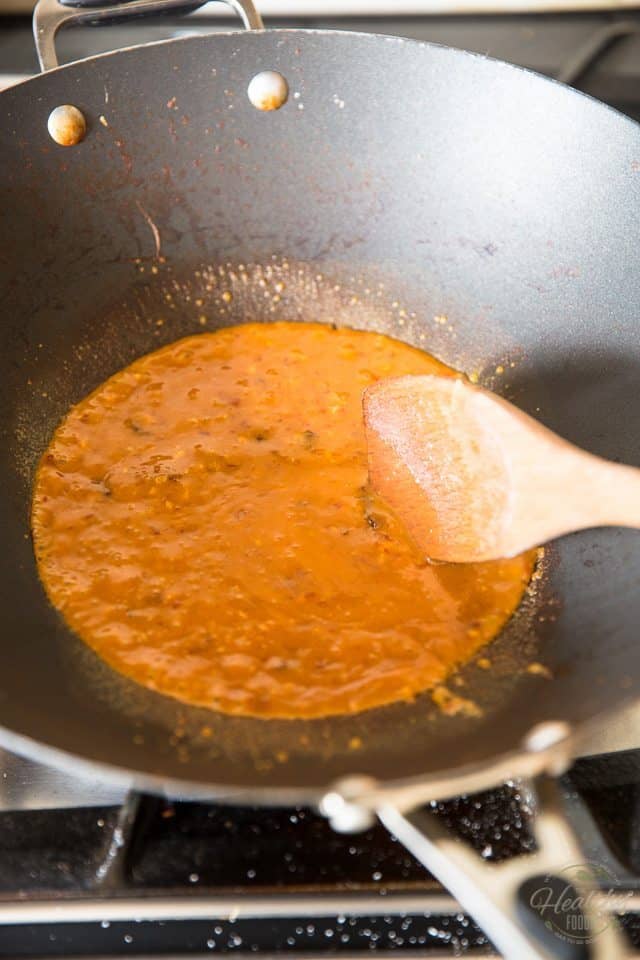 Now place the wok back over the heat source once again, lower that heat to medium and pour in the sauce; stir continuously for about 30 seconds, until the sauce is slightly thickened.

This sauce burns fairly easily, so make sure to keep a good eye on it, and never stop stirring! 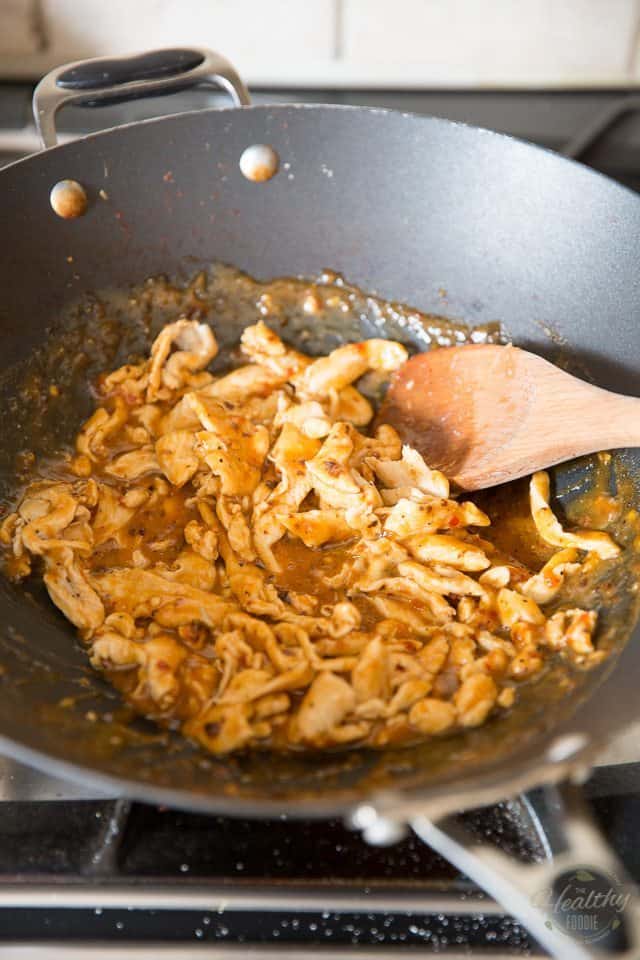 It’s now time to return the chicken to the pan and mix well until the meat is completely coated with the sauce.

And that’s it, you’re all done! Time kill the heat now, all that’s left to do is assemble the plates. 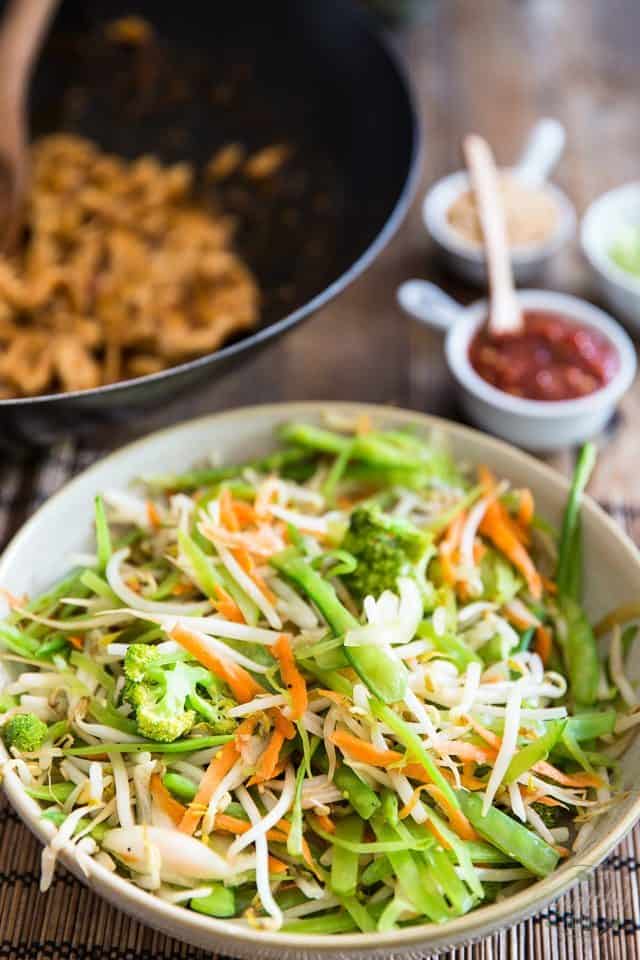 Grab that bowl that has all the beautiful veggies in it… 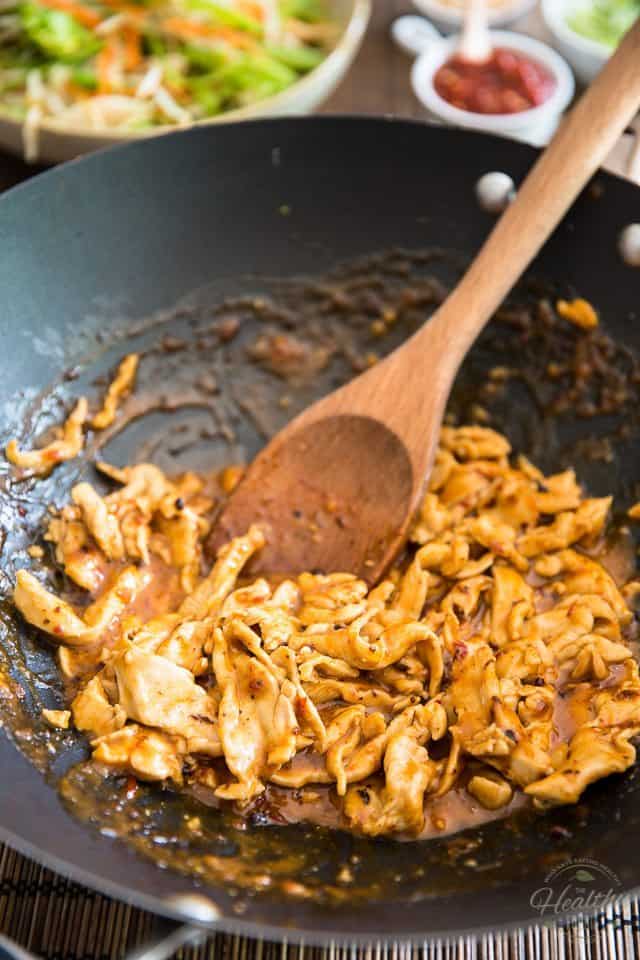 And your chicken that’s all good and ready to go and covered in super yummy sauce.

If you chose to make rice, I’m pretty sure that it too must be ready by now… 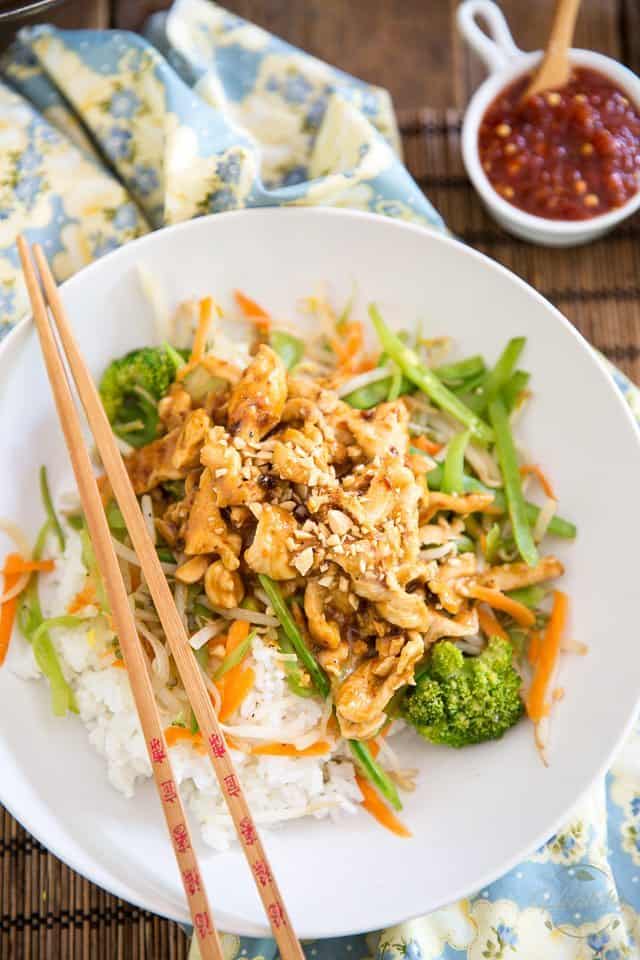 Arrange the rice, vegetables and chicken nicely on the serving plates, and garnish with a pinch of chopped peanuts, if desired.

And if you or your guests like it particularly spicy, have some more of that sambal oelek sauce available on the side! 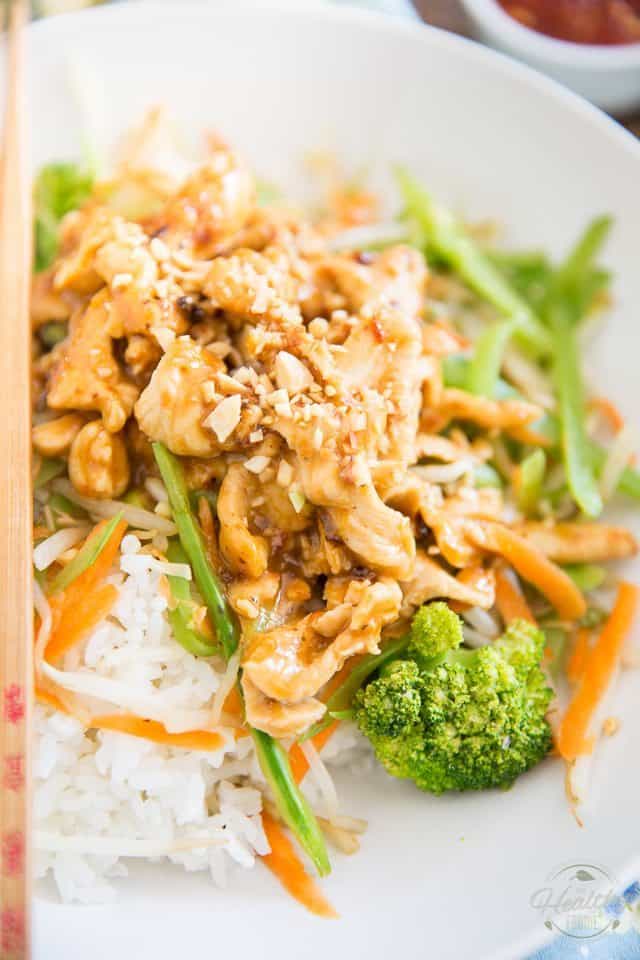 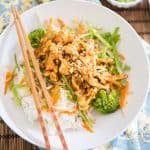 Prep Time: 10 minutes
Cook Time: 20 minutes
Total Time: 30 minutes
This Spicy Peanut Chicken Teriyaki is at least a hundred times better than the one I usually order at my favorite Teriyaki restaurant, and so easy to make!
Servings: 4