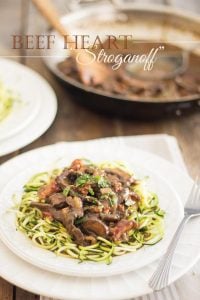 Now please, don’t hate me. I swear to god, once you’ve had a taste of this, you’re going to love me forever for having you discover this delicious (and very affordable, might I add) cut of meat.

Plus, served “Stroganoff” style like this, swimming in a delicious, creamy sauce with big chunks of golden mushrooms and bits of smokey bacon, it becomes very approachable, and palatable, too! 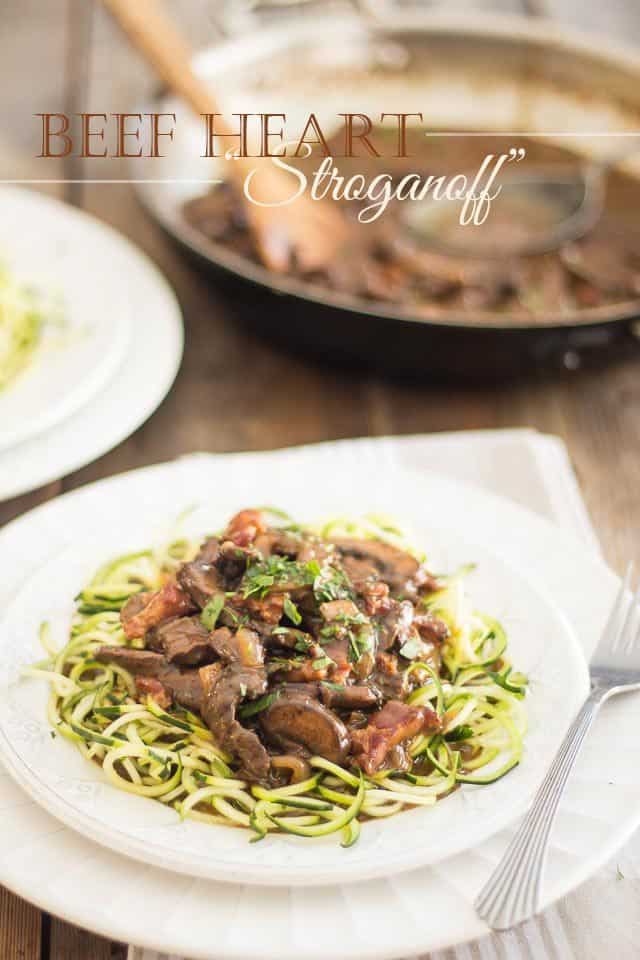 Now, before anyone comments on this, yes, the bacon that I am linking to in this recipe is the bacon that I used to make this Beef Heart Stroganoff recipe. Yes, I know, I used TWO whole tablespoons of pure  sugar to make said bacon. Still, I consider this recipe to be plenty Whole30® compliant for me. Even if that bacon technically has sugar in its list of ingredients.

Hear me out. I used 2 tablespoons of sugar, which I then rinsed off, to make over 8 pounds of bacon. How many grains of sugar per slice does that leave behind? Surely a heck of a lot less than there are in a single sip of Kombucha. Yet, consuming Kombucha is allowed and even encouraged during a Whole30®. And don’t even get me started on Larabars…

Personally, I would never even DREAM of so much as coming close to any of that stuff during a clean eating challenge. Not only does it contain way too much sugar for my liking, but Kombucha also contains alcohol, to some extent. Probably much more than pure vanilla extract ever will. Yet, vanilla extract is also off limits during a Whole30®. So yes, I guess you may say I have a couple of bones to pick with the official program rules, but that’s just me.

That said, if you are a real purist and consider my smoked bacon to be non-compliant, you can always make this exact same recipe and use bacon that meets the requirements.

As for me, I am far from considering that I sabotaged my Whole30® efforts by consuming that bacon. Again, that’s just me.

Now don’t get me wrong. I think the Whole30® is an EXCELLENT program and everyone should do it at least once in their lives, whilst sticking religiously to the original rules. Like Melissa and Dallas say, they had to draw a line somewhere, which is completely understandable.

I chose to move it by a hair for MY challenge, and I’m living perfectly well with my decision.

Alright, now that I got that off my chest, what do you say we actually get cooking? That Beef Heart Stroganoff isn’t going to prepare itself! 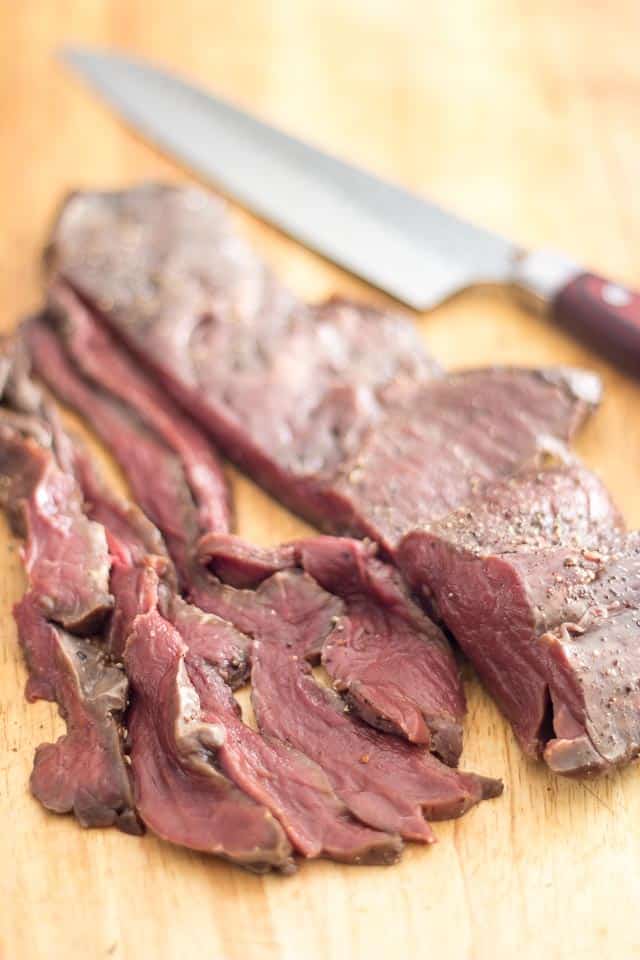 First you’ll need to prep your beef heart and ideally, marinate it overnight in balsamic vinegar. Since I just showed you how to do that yesterday, I’ll have you hop over to that post for a minute if you don’t mind, so you can check out how it’s done (and get a glimpse of what a whole beef heart looks like) then you can return here for the rest of the instructions. 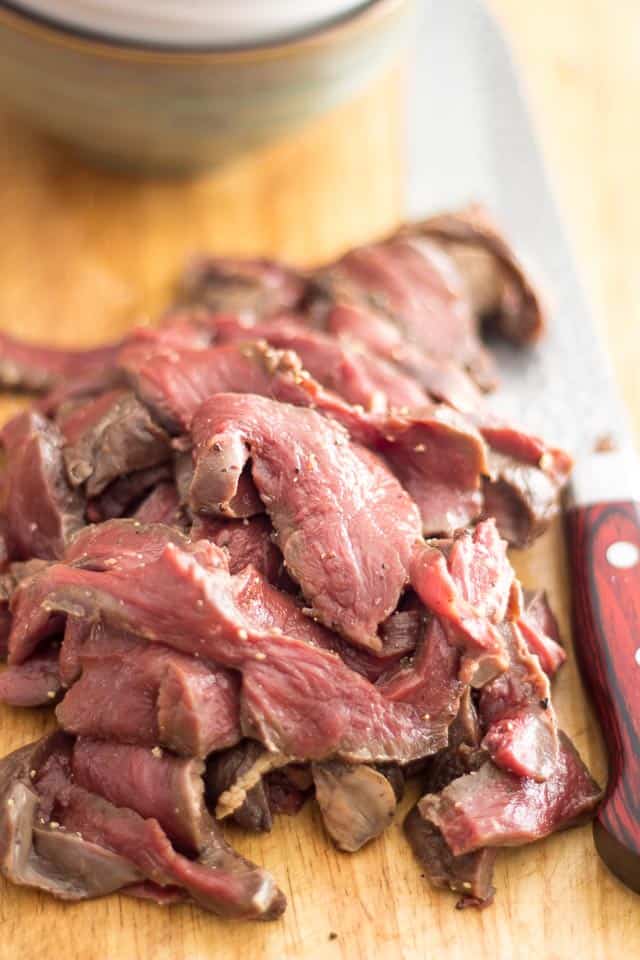 Once your beef heart has been prepped and, ideally, marinated, you’ll want to cut it into thin strips and then sprinkle it generously with salt and pepper.

Seriously, wouldn’t you agree that this meat is absolutely gorgeous? I personally find it looks so good, I almost want to eat it raw. Almost, I said… 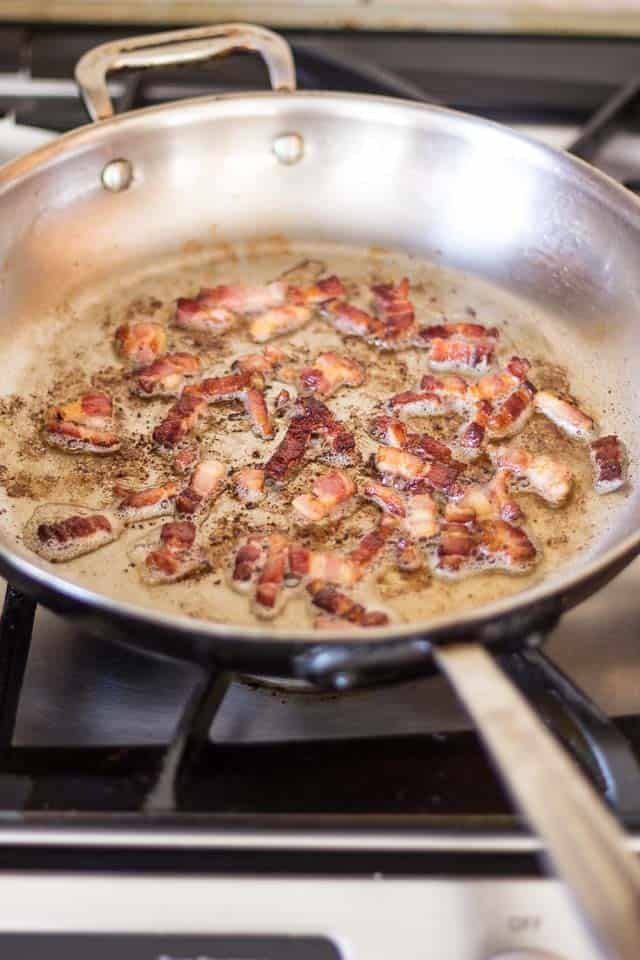 Cook the bacon in a large skillet set over medium heat until nice and crispy, and then remove it to a plate but leave the fat in pan. 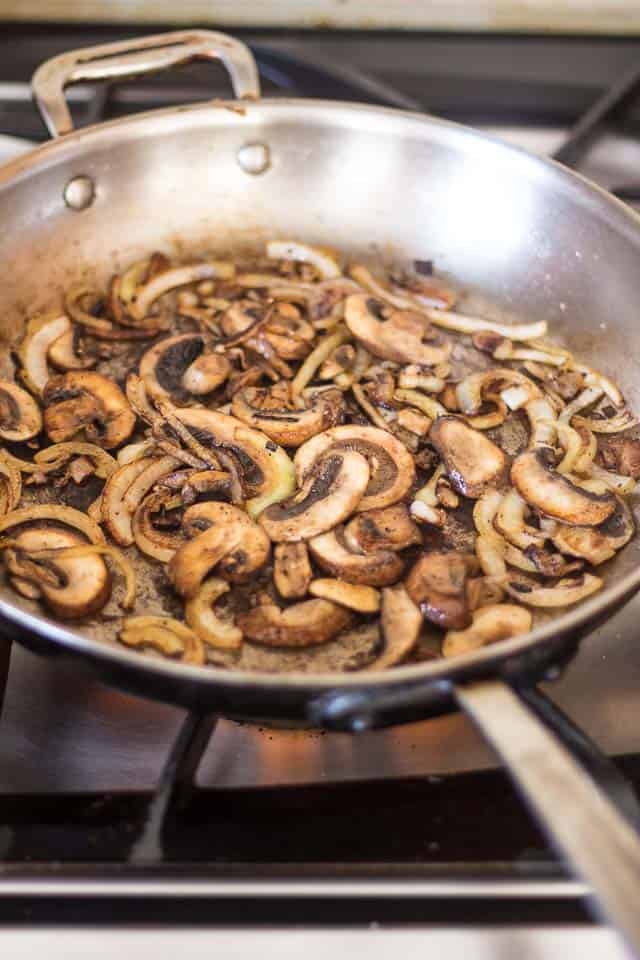 Add the onions to the pan with the bacon fat and cook them until they become soft and slightly caramelized, about 5 minutes.

Add the sliced mushrooms and continue cooking until they are softened and golden brown.

Remove this to the plate, next to the bacon, to keep it company. 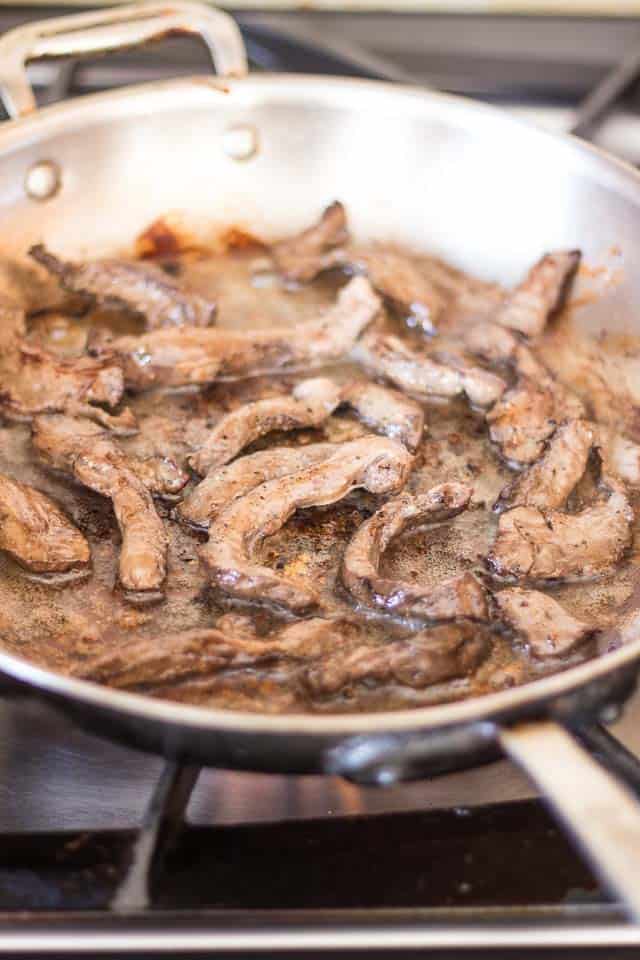 Return the pan to the heat source, add more fat if necessary (I added a couple of tablespoons of coconut oil) and add the meat strips to the pan in a single layer, making sure that the pieces do not touch, and cook until brown on all sides.

Work in several batches if you have to so you don’t overcrowd the pan. Remove the cooked pieces of meat to the plate with the mushrooms, onions and bacon.

Now you better keep an eye on that plate… there’s so much flavor going on in there, these guys might start a party any minute! 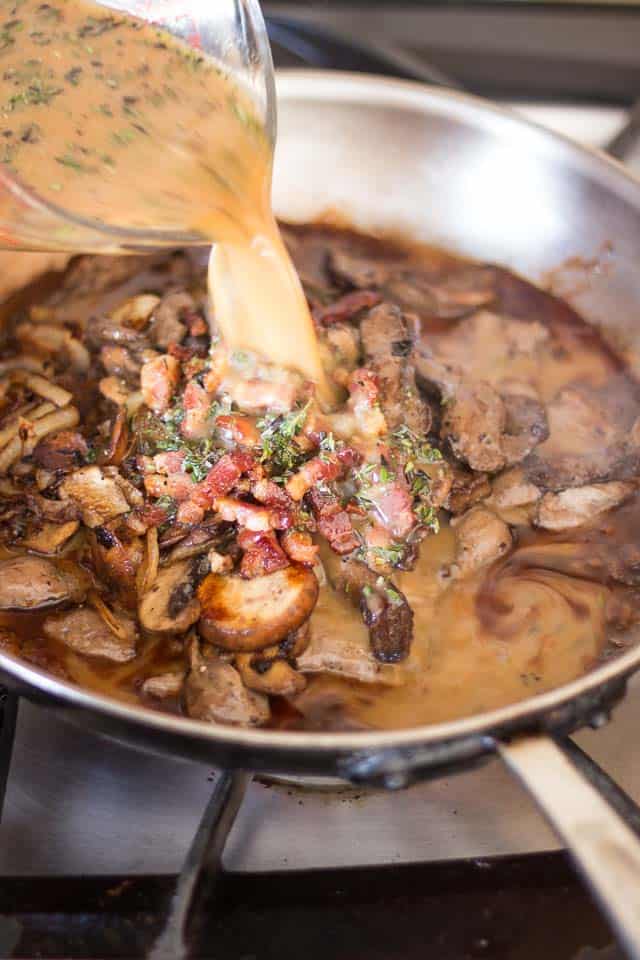 When all the meat is cooked, add it back to the skillet, along with the cooking juices, onions, mushrooms and bacon. (Hopefully you didn’t have to interrupt anything!)

Mix the bone broth, Dijon mustard, balsamic vinegar and rosemary together in a large measuring cup and pour that over the rest of the ingredients.

Bring this to the boil, then lower the heat and simmer slowly, uncovered, for about 30 minutes or until the broth has reduced by about half and the beef heart is somewhat tender.

I say somewhat because it will never become melt-in-your-mouth tender… at least not in so little time. I suppose if one wanted their meat to achieve that desirable state, they’d have to let the beef heart simmer slowly for many hours.

Don’t be alarmed, though. While it will remain somewhat firm, the meat will still become amply tender and won’t feel chewy, leathery or rubbery at all. I think you’ll find its texture to be more than satisfactory. 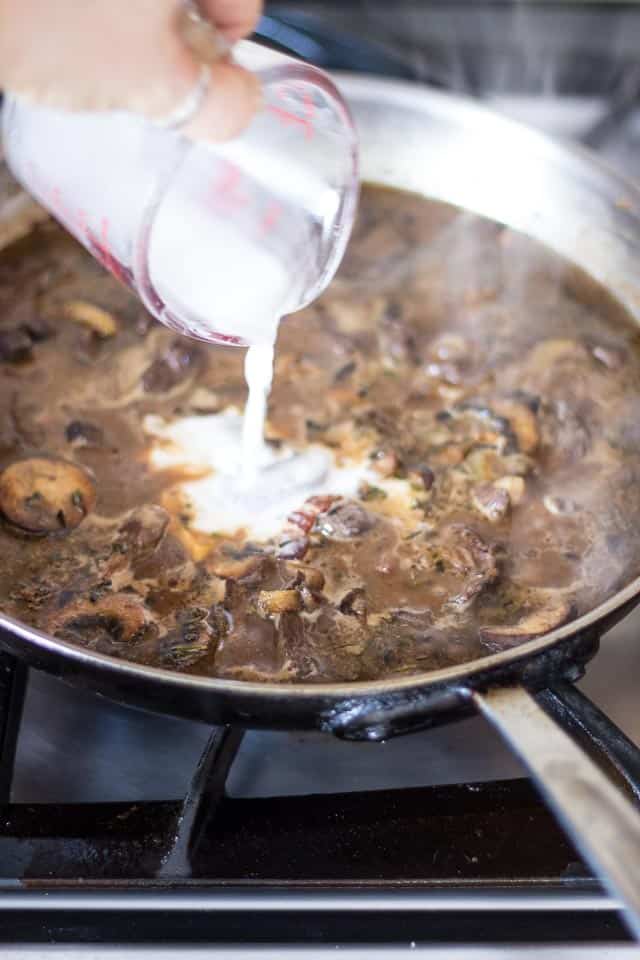 When the liquid has reduced enough and the meat is cooked to your liking, dilute the arrowroot powder in 2 tablespoons of water and then pour that right into the simmering sauce. 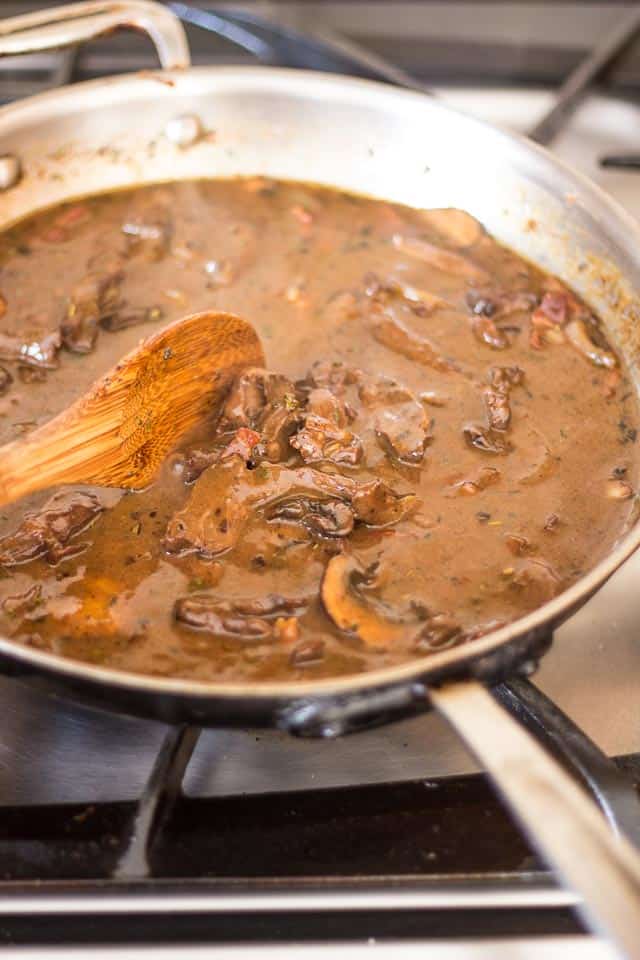 Stir well with a spoon until the sauce is thickened, about one or two minutes. 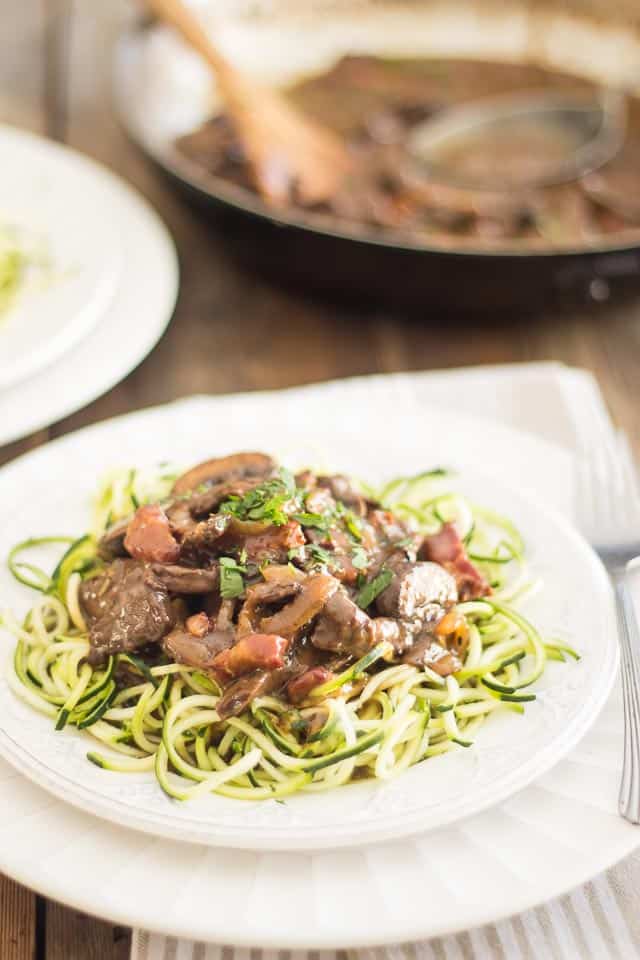 Serve immediately over spiralized zucchini and garnish with fresh parsley.

There’s no need to even cook the zucchini, really; The heat from the sauce will take care of that for you.

Note, however, that the zucchini will render a bunch of water as it “cooks” in the sauce, so you’ll probably end up with twice as much sauce as what you initially added to the plate… 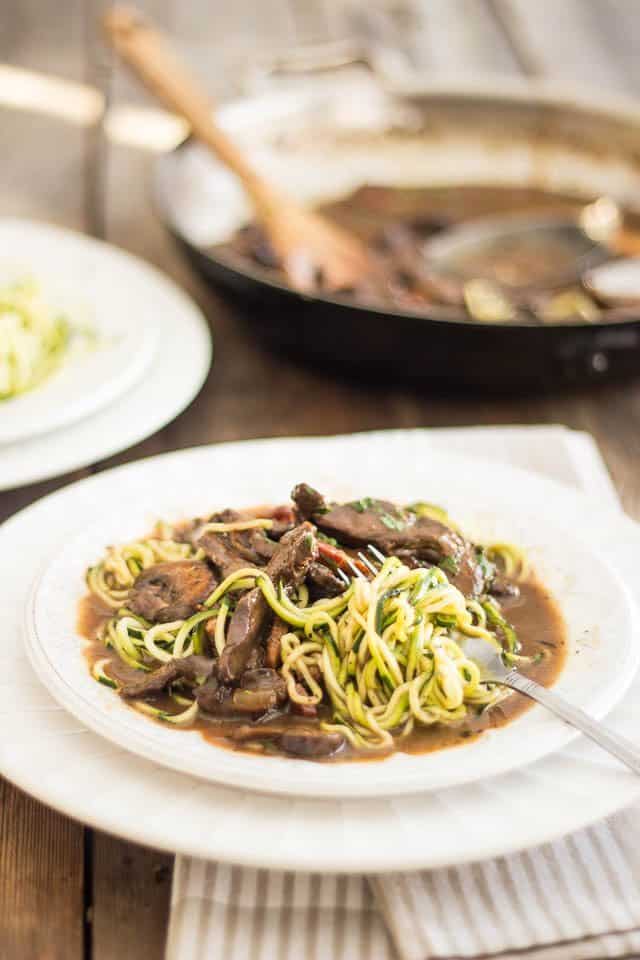 Just keep that in mind so you don’t end up with soup like I did… don’t go overboard with the sauce to start with!

Unless you don’t mind having Beef Heart Stroganoff soup. In which case, let yourself loose and go totally nuts with that sauce!

Only you might want to use a bigger plate, or bowl! 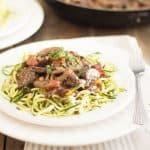 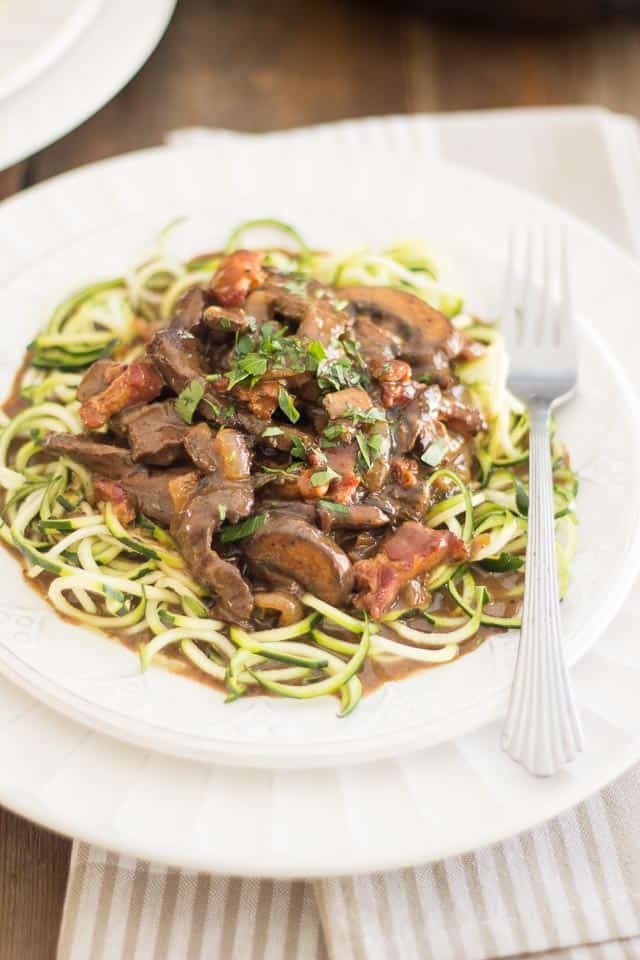 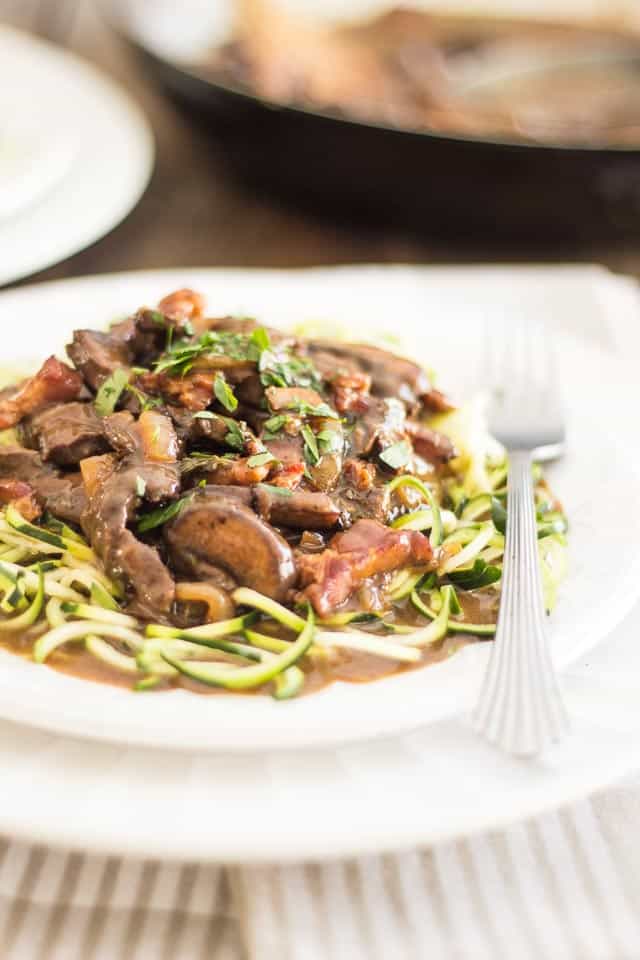