Buttered Pecan Pie in a Jar

Please pardon my French you guys, but this thing, this dreamy concoction of a thing that I am sharing with you today should actually and literally be called “Orgasm in a Jar”.

Seriously. No word of a lie. I’m not even exaggerating a little. Every single teaspoon of this heavenly spread that hits your tongue will invariably have your taste buds reach some sort of climax. Every single one. Without fail.

This is BY FAR the best, the single most delicious, decadent thing that I’ve ever eaten straight out of a jar. 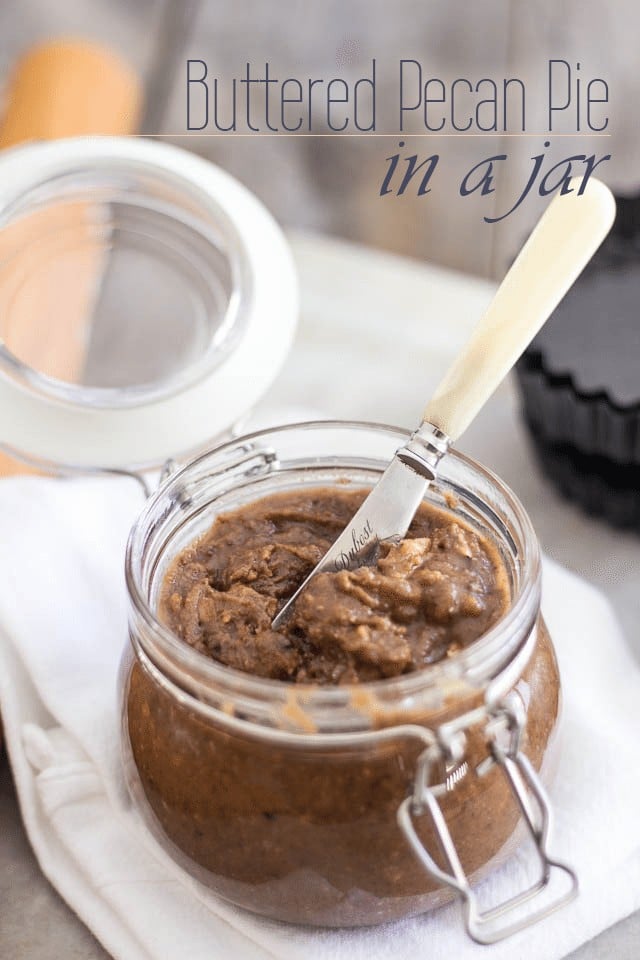 I must admit that it is a tad on the extensive side to make, especially when compared with other nut butters where all you need to do is add one or two kinds of nuts to your food processor and let the motor rip for a while.

Remember when I made this Sweet & Salty Macadamia, Cashew and Maple Butter and told you that it was pure crack? That you’d better walk to you next door neighbor’s and give them the jar before you even got a taste of it, because if you did taste that butter, then you’d be hooked for life and in big trouble as a result?

It’s just like eating the most decadent of pie fillings, the tastiest chocolate center, the sweetest fudge bar, the most insanely delicious soft candy… all rolled into one. This nutty spread is creamy and crunchy, sweet and salty, smooth and sugary… there are simply no words to describe it.

It has a combination of taste and texture that’s totally out of this world. It needs to be experienced. 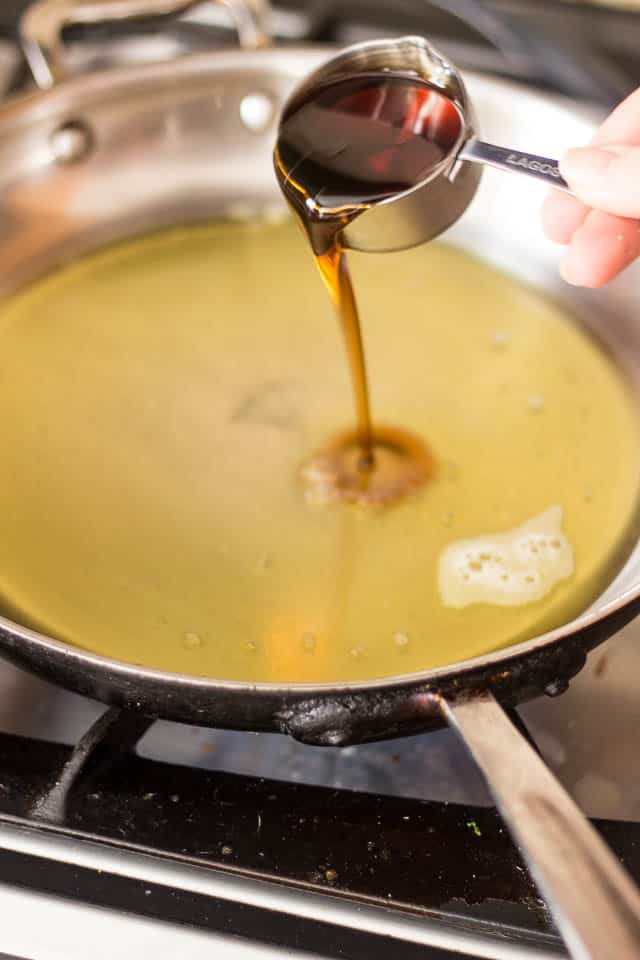 But then again, maybe you’d better leave this place at once and forget all about this recipe. Forget that I ever told you about it. After all, who needs another addiction, right?

But hey, if you really wanna do this, I guess I can’t really let you down now that I’ve gotten this far… there is such a thing as a point of no return, you know.

So let’s get started!

First, you need to add the ghee, salt and maple syrup to a large heavy skillet and bring that to a vigorous boil over medium-high heat. 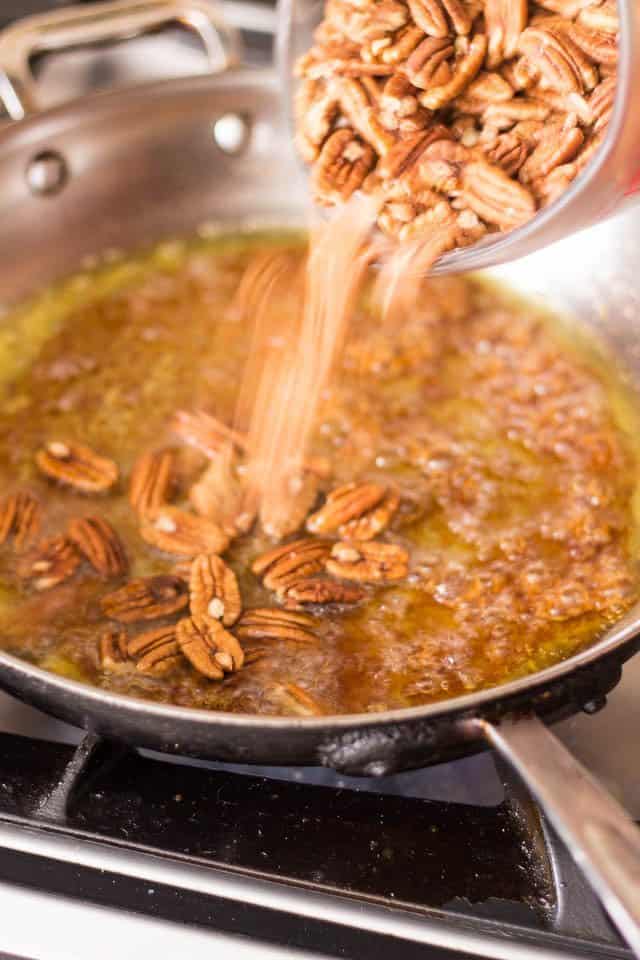 Let that syrup bubble frantically for a good minute then throw the pecans right in. 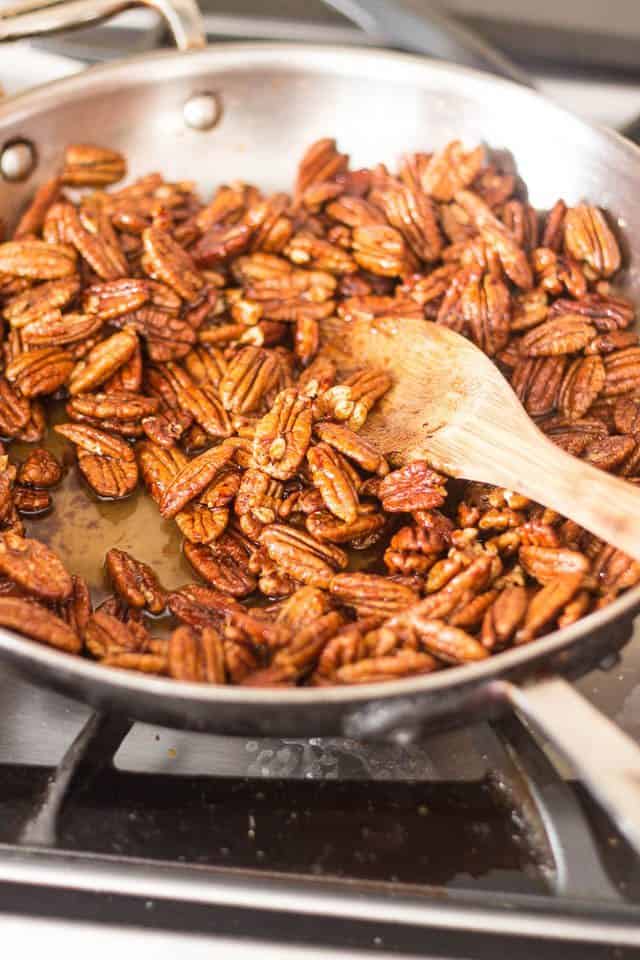 Cook the pecans, stirring often, until they take a nice golden caramel color and start to smell heavenly good, which should take about 2-3 minutes.

Remove from heat and allow to cool completely, until the nuts have hardened and can be handled with your bare fingers. 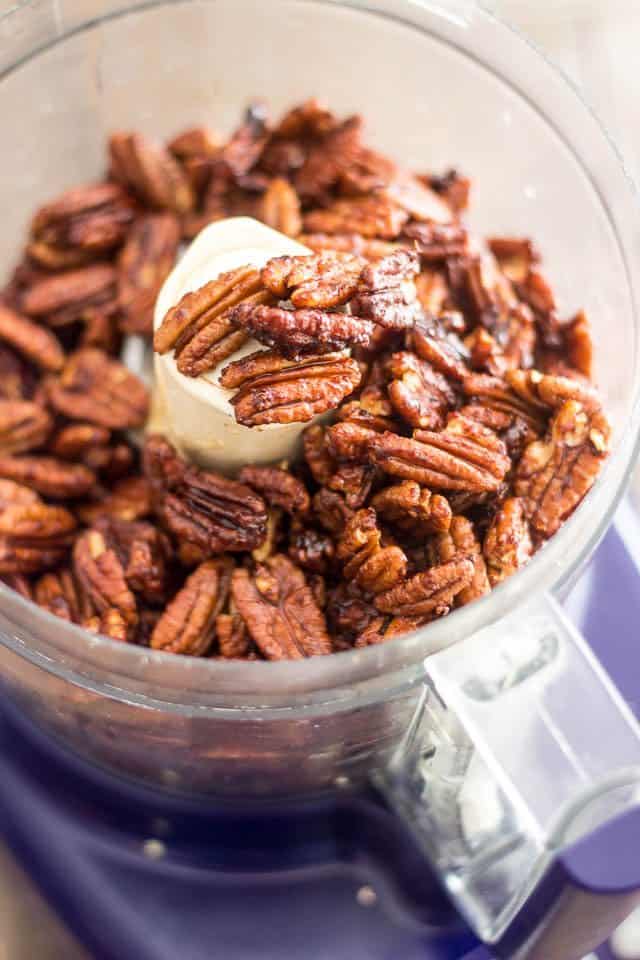 Reserve a cup of those candied pecans and throw the rest into the bowl of your food processor.

In fact, you could probably stop right now and already, you’d have a pretty tasty treat on your hands. I’m telling you, these candied pecans are very more-ish! Keep that in mind next time you have company coming!

But for now, just throw them in that bowl and try not to eat them all… We have some nut butter to make! 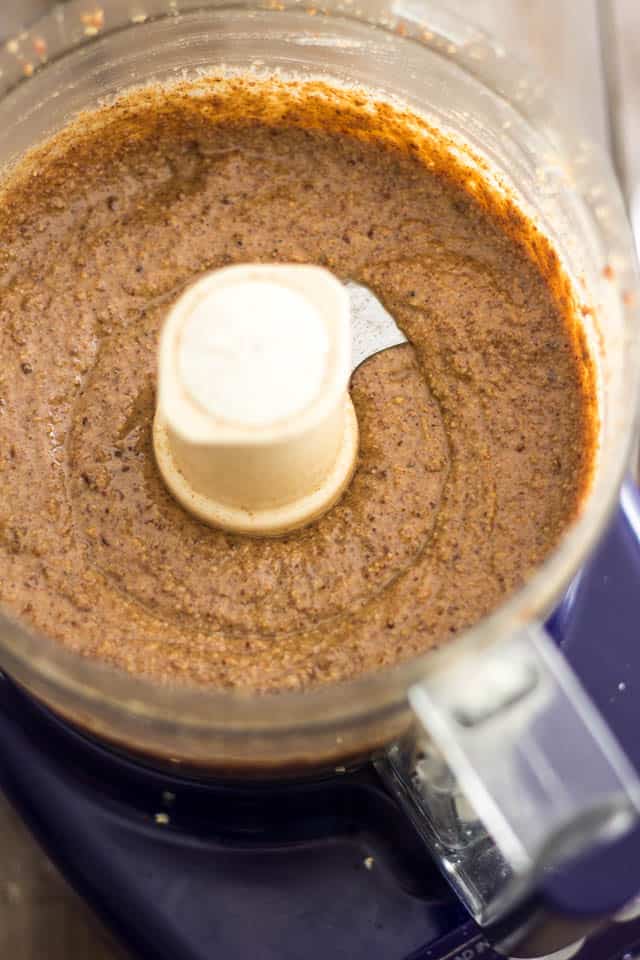 After a few spins of the blade, your nuts will have turned into this insanely fragrant half crunchy, half creamy mixture. 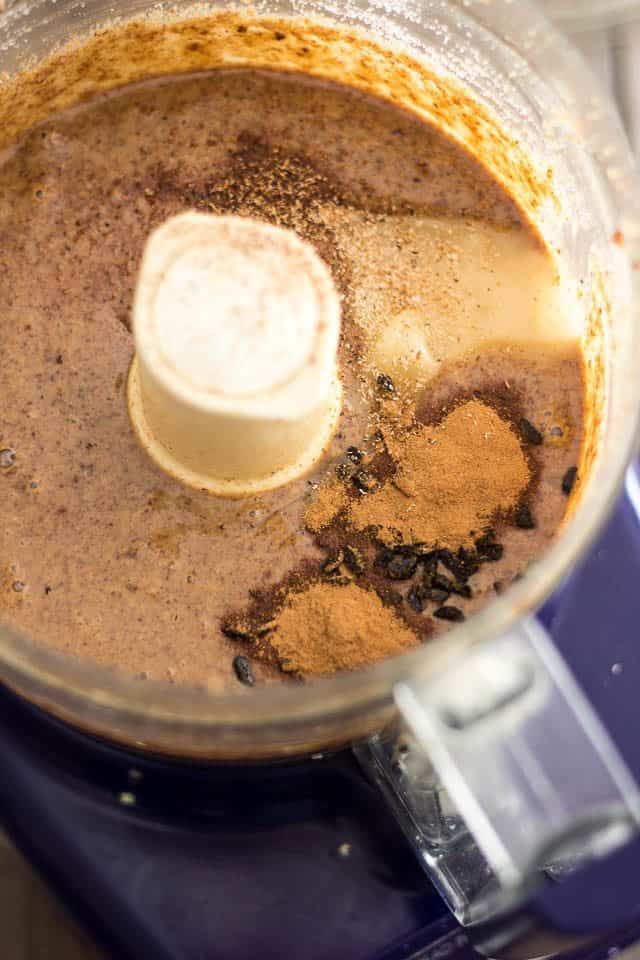 Stop the motor and throw in the cinnamon, vanilla and raw honey. Don’t even bother scraping the seeds of the vanilla bean. Just chop it finely and throw it all in there. Trust me, it’ll get pulverized anyway. So why waste? 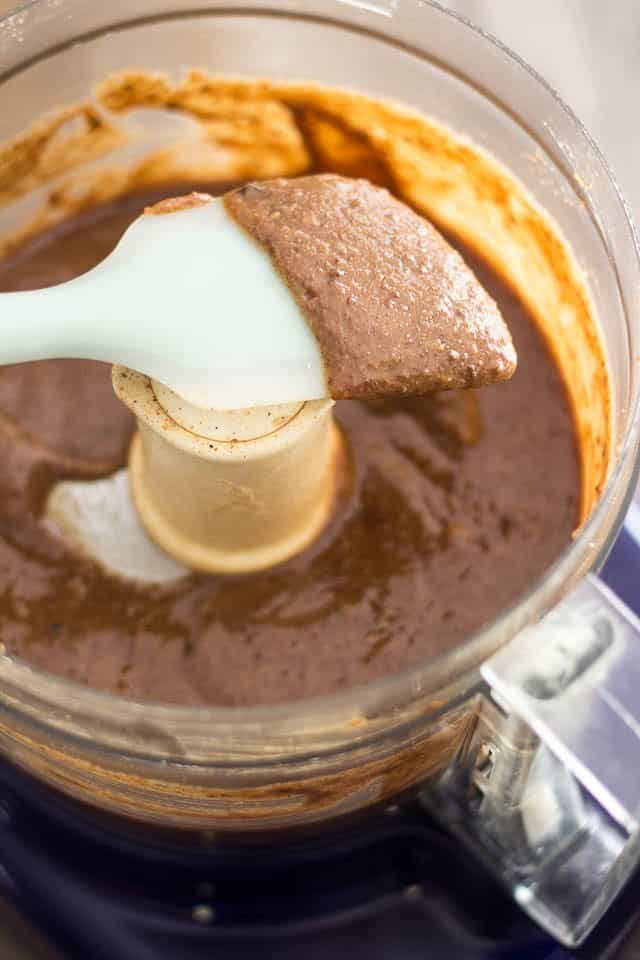 Get that blade spinning for a few seconds more, until the newcomers are nicely incorporated. Notice how much darker the butter got? It’s a thing of beauty, really! 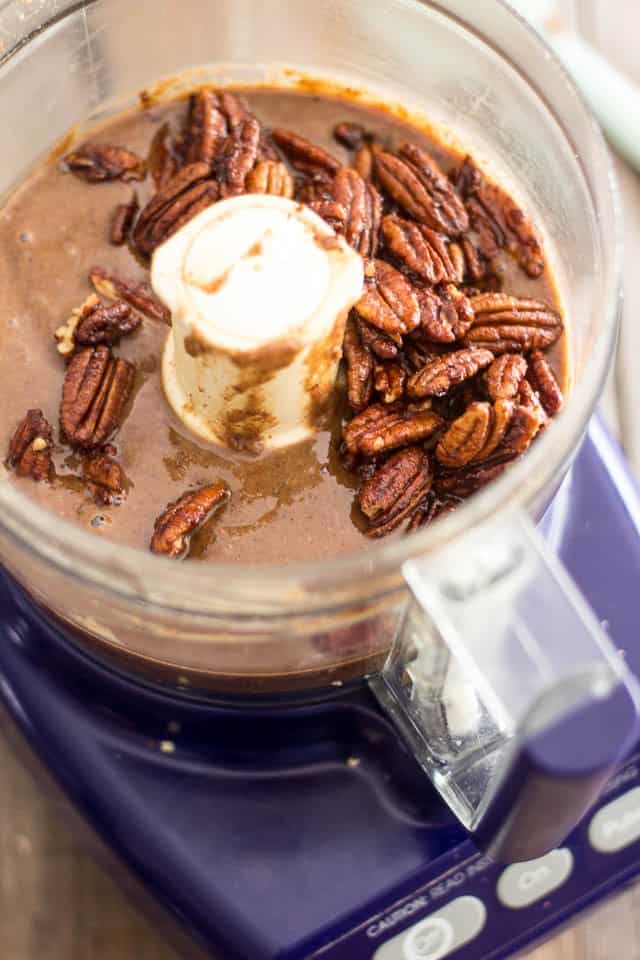 Time to add the reserved candied pecans and give them a few quick pulses, just to break them down into nice little crunchy specks of nutty goodness. 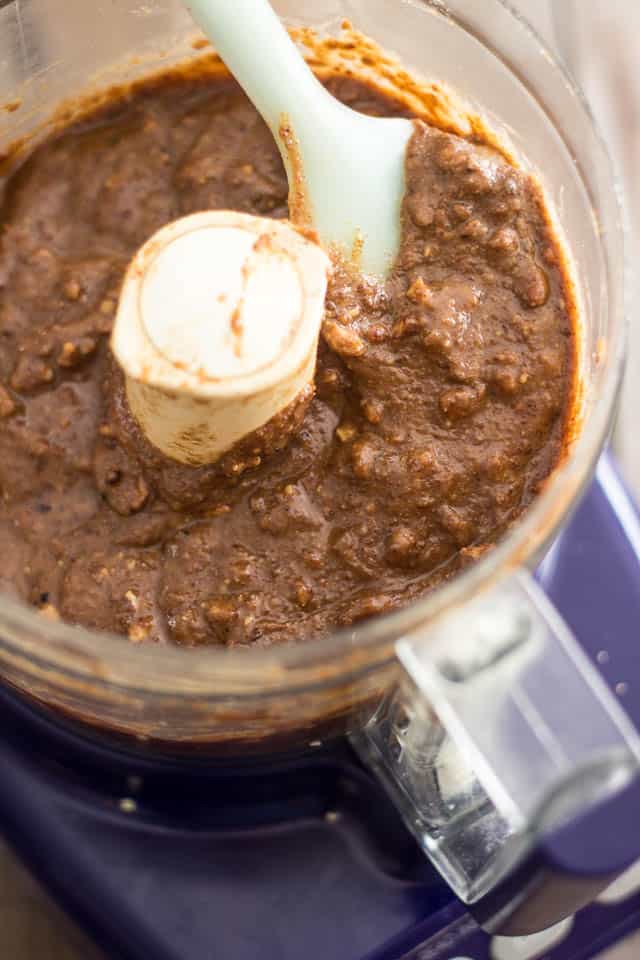 This is what the final mixture should look like. I’ll give it to you, it doesn’t look all that incredibly good right now. I wish you could smell it, though. OH! The smell alone is enough to knock you right off your feet.

Transfer that to a jar and let it rest for a couple of hours, or better yet, until the next day. I always say that nut butters truly benefit from sitting for a full day. This helps the flavors reach their full potential and the texture get back to where it’s supposed to be. 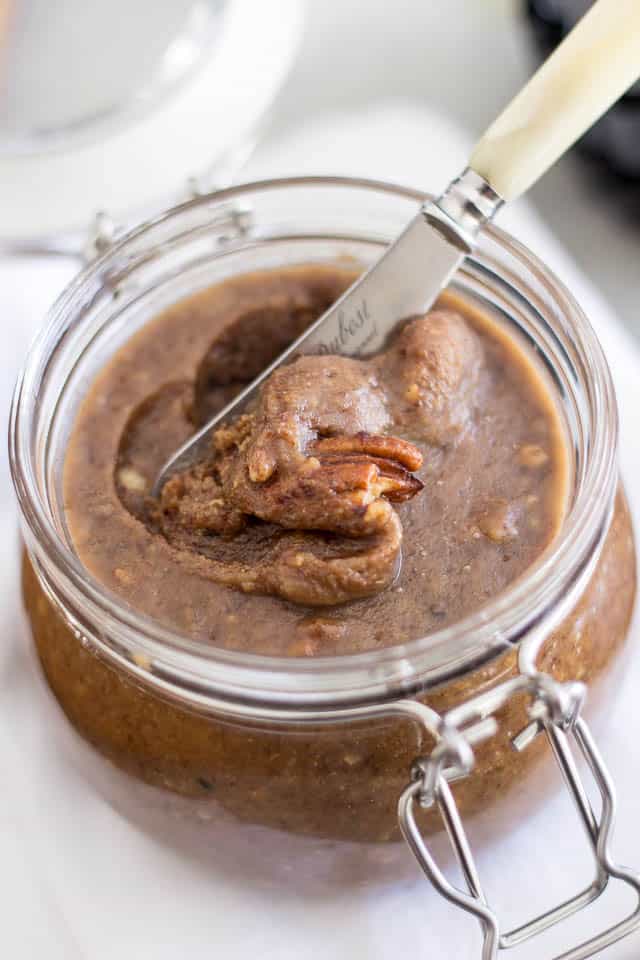 See what I mean?

Look at how beautiful and creamy and sugary this now looks, after having rested in that jar for a day…

Oh, how I wish you could just extend your spoon right through that screen and get a taste of this. 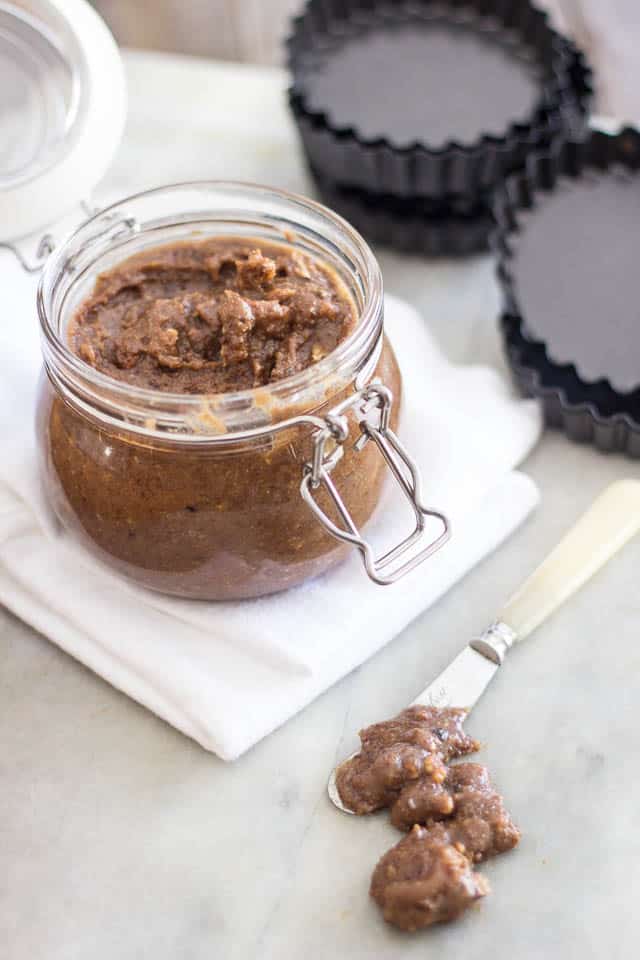 Unfortunately, you’re gonna have to make your own batch…

Or curse me, rather! 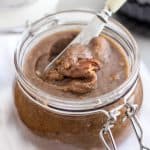 Buttered Pecan Pie in a Jar 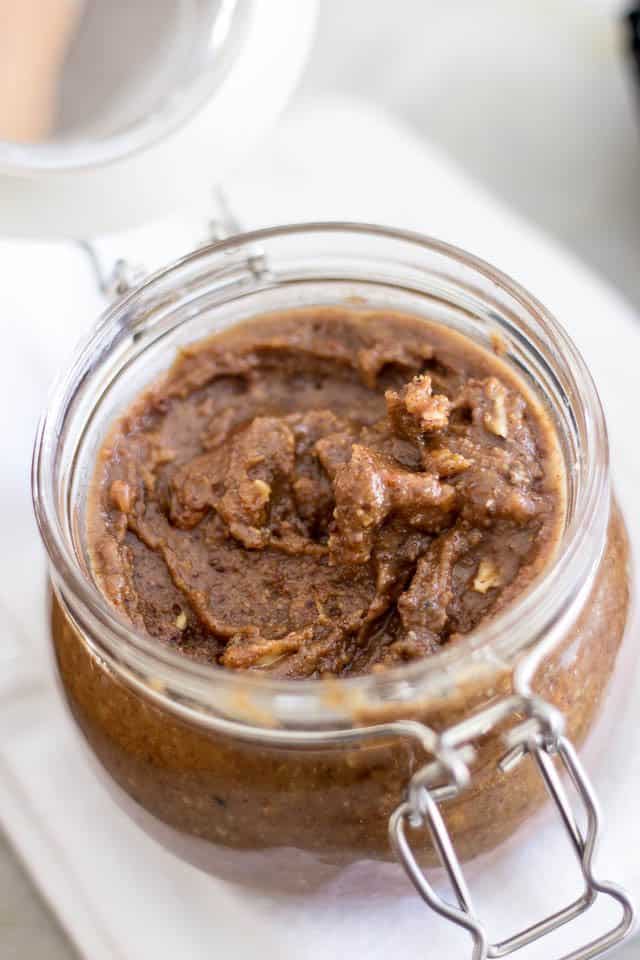 37 Comments on “Buttered Pecan Pie in a Jar”