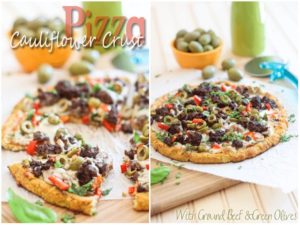 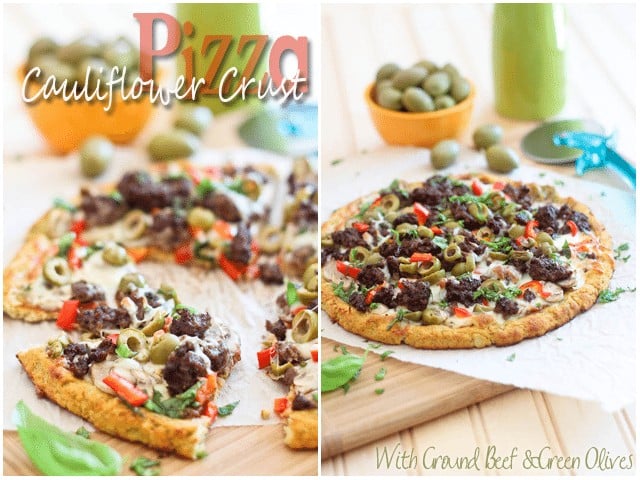 I recently got a major craving for one of my favorite pizzas ever, namely Ground Beef and Green Olive Pizza.

I figured it was probably a good time for me to go out and try the classic paleo replacement that is cauliflower crust pizza. I knew of its existence for I’d seen a lot of recipes for it on several blogs, but  never was fully inspired to actually go out and make it.

As long as grains were still a part of my regular diet, I really couldn’t think of a valid reason for me to make the switch, except for maybe saving myself a couple hundred calories.

But for me, the pleasure of biting into a chewy, soft and cracking pizza crust far outweighed the need to slash down a few calories. 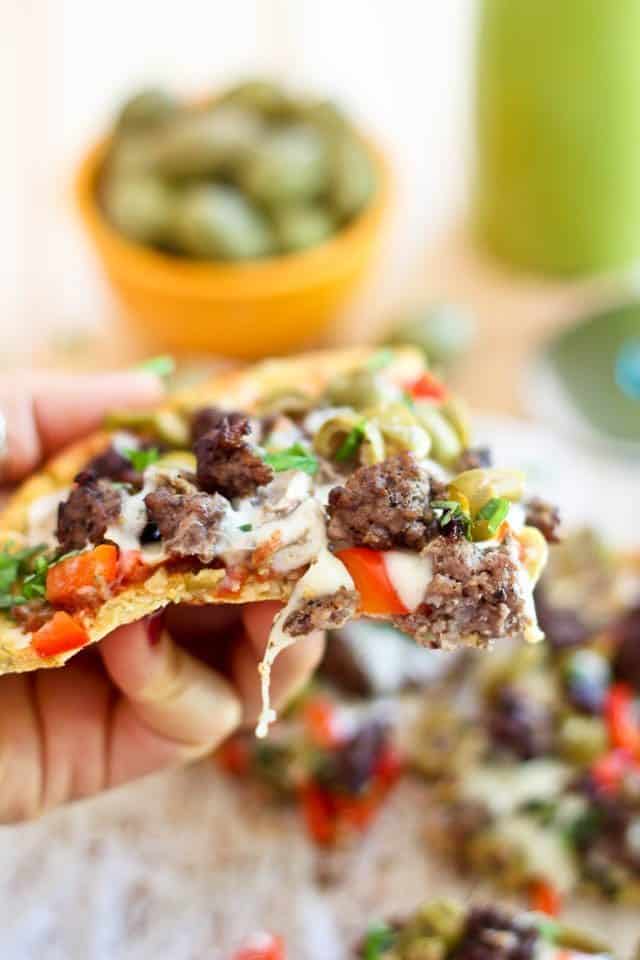 I’ve since changed my views on the subject and now believe that I’m much better off without the grains, so I figured I was finally good and ready to make the switch. Officially!

So I asked for recommendations on Facebook and got directed to quite a few yummy recipes.

Unfortunately, most of them called for a hefty serving of cheese, which I was not a fan of. If I was gonna have pizza with cheese, I preferred to save said cheese for the top and not add it to the crust itself.

Hey, something HAS to be said for hooey, gooey, melting cheese.

And so it was decided: I would use the recipes for inspiration, but create my very own, dairy free version.

One of my main concerns with cauliflower crusts was that I’ve always been HIGHLY skeptical as to its ability to “stay together”. I thought for sure that it would completely collapse and fall apart as soon as I’d try to lift a slice up from my plate.

Well, much to my surprise, it held up just fine! 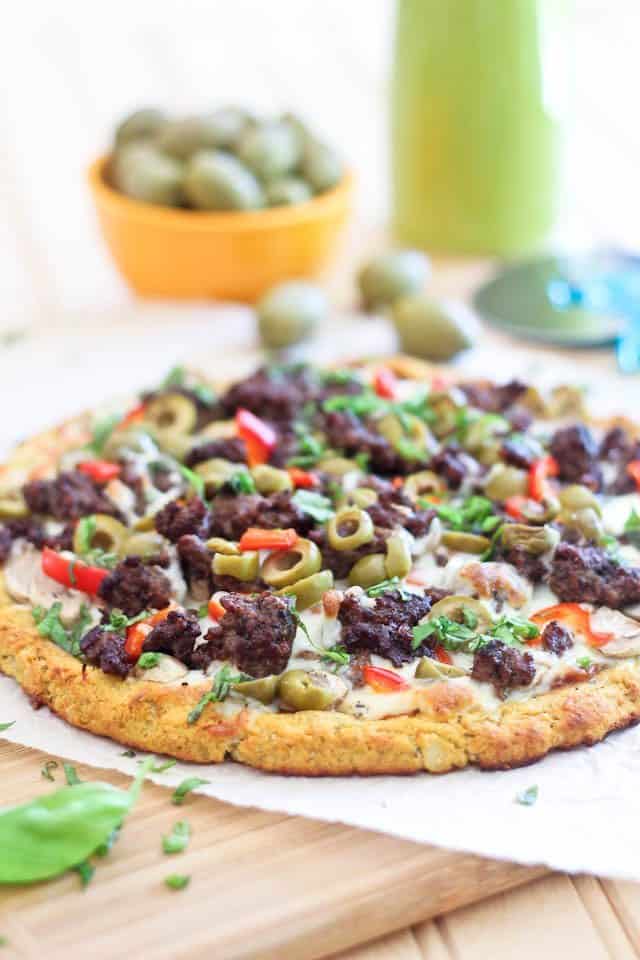 See? I was able to hold my pizza in one hand, just the way I like to eat it.

I’ve never been one to eat pizza with a knife and fork, you see. I dunno. To me, that kind of misses the point. I mean, you wouldn’t think of eating a hamburger or a hot-dog with a fork and knife now, would you? Well, to me, same goes for pizza. It’s meant to be eaten with your hands! Why else would it have a crust?

And this crust allowed me to do just that. SCORE! 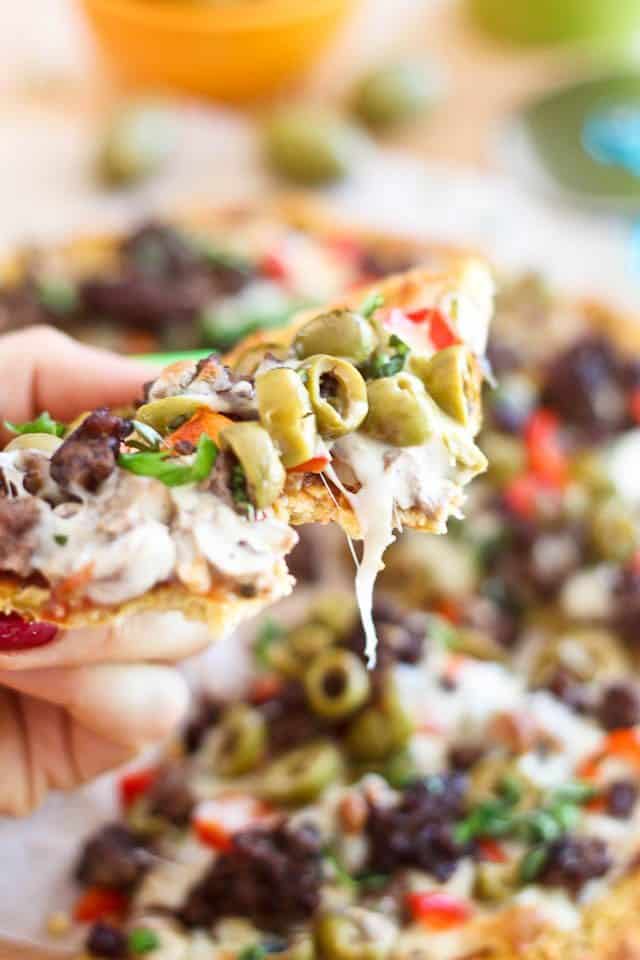 Now, of course, the texture is really different from that of a traditional pizza crust. You don’t get much of the crispiness or chewiness that a good bread crust provides. However, its texture is still very agreeable, if you ask me. Hard to describe, but one that I can very well see myself adapting to.

It’s sort of firm, chewy and soft, all at the same time! That’s pretty much how I would put it. But the best way to find out, is to try it for yourself.

One department in which this crust would be far superior to the classic whole grain crust is FLAVOR!

Let’s face it, bread on its own doesn’t have much flavor going on.

This crust, however, is simply LOADED with flavor, so in that sense, it makes the whole pizza eating experience even better.

In fact, this crust has so much flavor on its own that I think it would make for a fantastic light meal simply drizzled with some good extra virgin olive oil, topped with a few sliced  olives, a handful of fresh herbs and maybe a few pine nuts sprinkled on top.

In short, I think I won’t need much more convincing to switch to cauliflower crust for good. 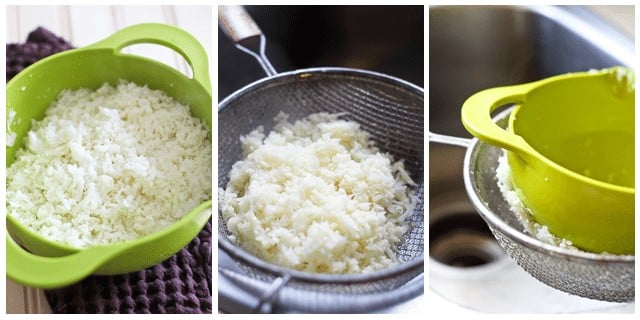 Grate the cauliflower, microwave and remove extra liquid by pressing it down through a fine mesh sieve 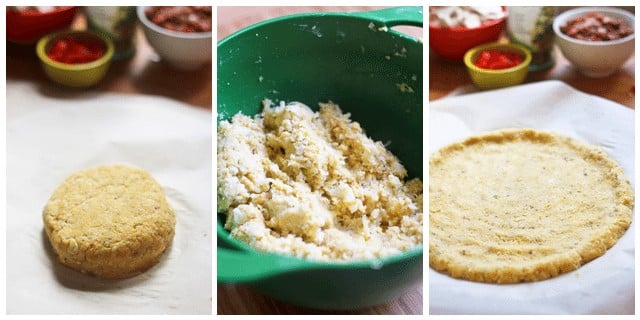 This is what the dough should look like when all the ingredients have been mixed together.

Form the dough into a ball and shape into a thin round disc.

If you want a thicker edge, you’re gonna have to form that by hand as this dough won’t raise! 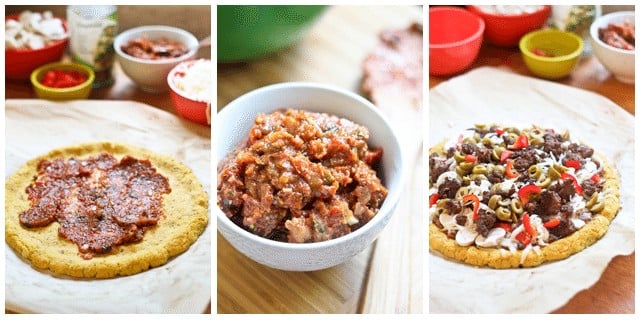 After the crust comes out of the oven, spread however much tomato sauce you like all over the top of your pizza then add the toppings.

Then back into the oven it goes…

Can you tell I like mine with LOTS of toppings? 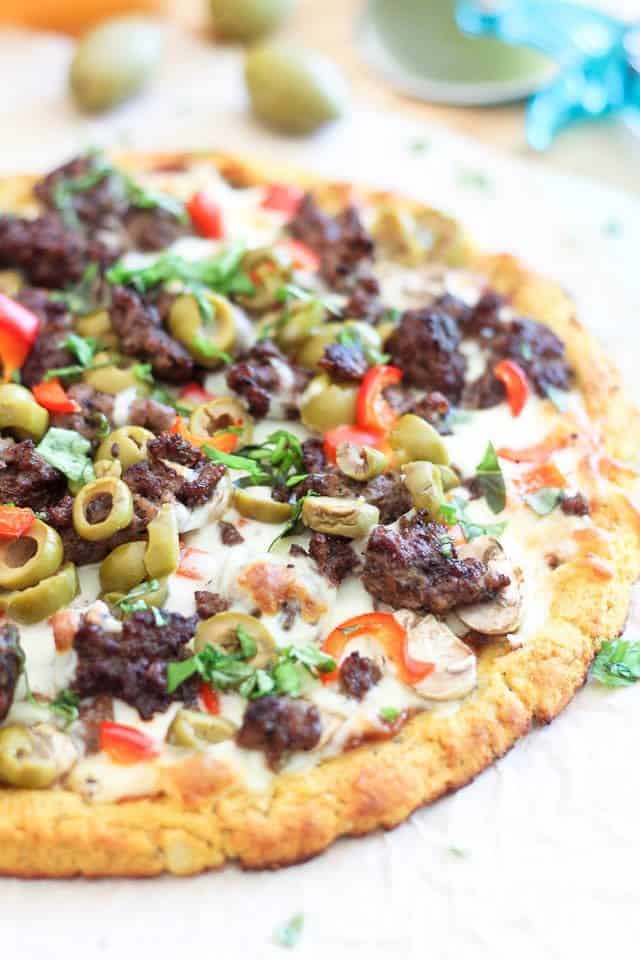 Take pizza out of the oven and let it cool for a minute or two.

This’ll give you some time to admire it… 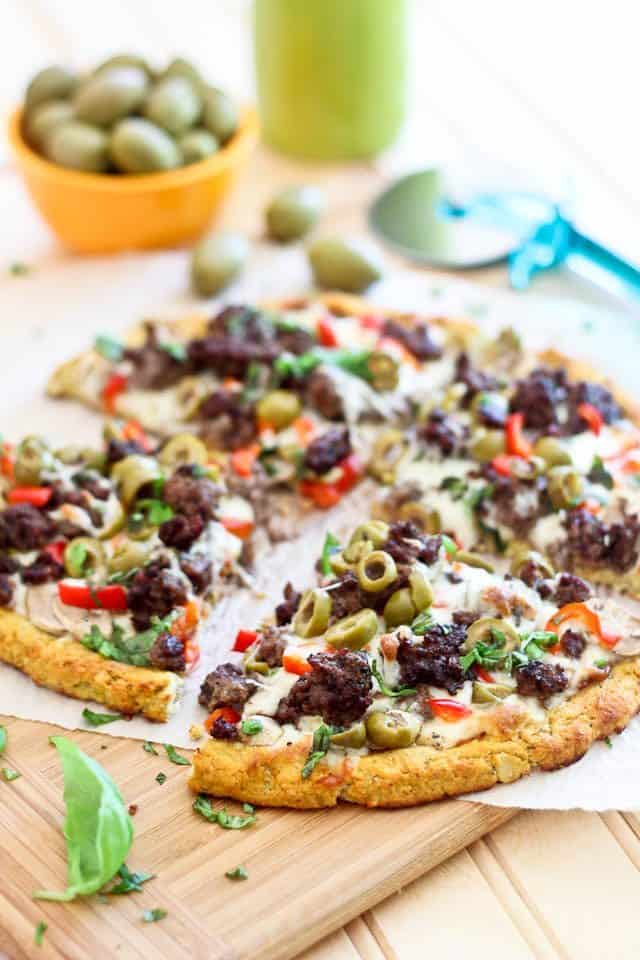 Cut into wedges and admire some more… 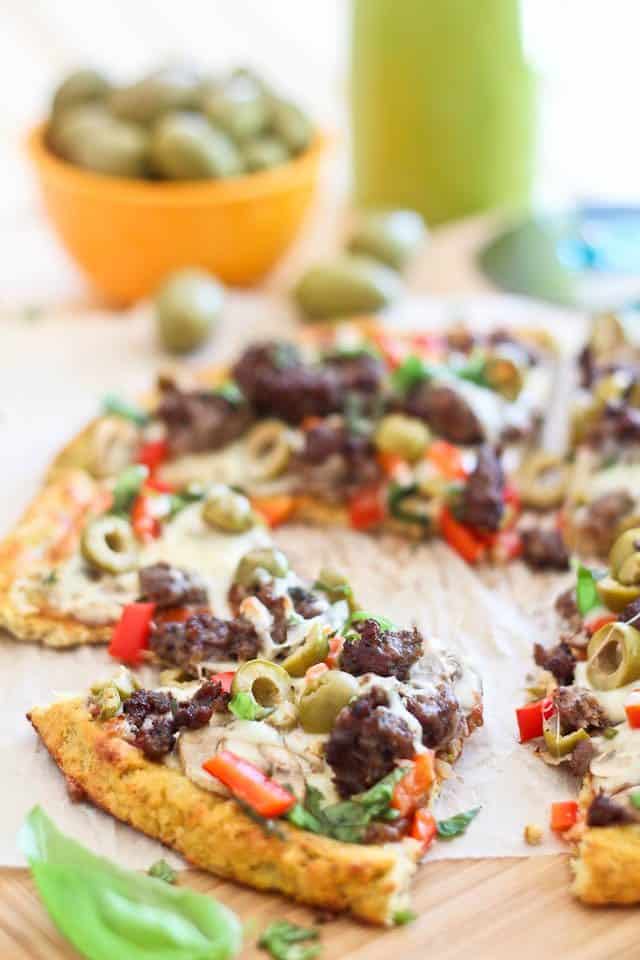 And it can also be torn into smaller pieces, without completely falling apart!  Take a closer look…

Can you see that this crust really does have a crusty feel to it?  I think I’m in love! 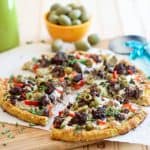 Prep Time: 15 minutes
Cook Time: 45 minutes
Total Time: 1 hour
On top of being super tasty, this Cauliflower Crust Pizza is sturdy enough to be held in one hand! Impressive. I think I'm in love!
Servings: 2