I just love quinoa. This, I think, is the greatest new food discovery that I made this year. I find that, not only it tastes great, but it also looks great. The tiny little grains are just super cute and they seem to just pop in your mouth, almost like caviar.

Seriously, if you’ve never tried quinoa, you definitely should! You cook it just like you would rice, but make sure you rinse it real good beforehand. 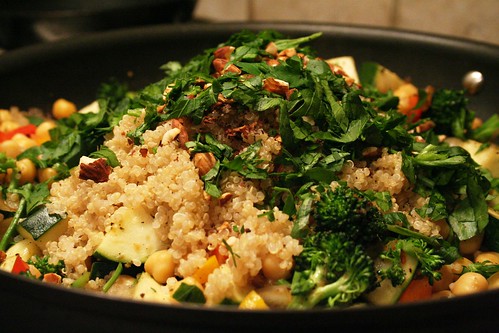 Here is the recipe:

One cup quinoa
Two cups water
Half a teaspoon of salt

One large onion, diced
One large zucchini, cut into big chunks
One and a half cup broccoli florets
Two dozen snow peas, cut in pieces
One bell pepper, diced (whichever colour you like)

One third of a cup parsley, chopped
Salt and pepper to taste
Pinch chilli pepper flakes (now that one is optional, of course!)

Rinse quinoa thoroughly in a small strainer or by running fresh water over the quinoa in a pot.  Drain.

Put quinoa and water in saucepan and bring to boil.  Reduce heat to simmer; cover and cook until all water is absorbed (10-15 minutes). When done, the grain appears translucent and the germ ring will be visible.

While quinoa is cooking, sauté the onion in a large skillet over medium heat, until nice and golden brown. Add the rest of the vegetables, salt and pepper (and chili flakes) to taste, and cook for a few minutes, until vegetables are cooked but still firm. Add chick peas, quinoa, roasted almonds and parsley. Stir and serve.