Up until recently, pickles were a real big mystery to me. I had NO idea how one could turn a simple bright green, fresh and crisp cucumber into this yellow-brown-greenish salty, crunchy, vinegary delicacy.

I thought for sure that pickle making was just as long and complicated as making olives from scratch. Hey, for all I knew, maybe one even needed some kind of degree in chemistry to successfully make the transformation happen.

How often did I look at those pretty little pickling cucumbers when they were in season, hoping that I could bring a few home with me, but never dared because I thought that for one, they weren’t even edible unless they were pickled and two, since I didn’t hold one of those aforementioned degree in chemistry, there was no way I could successfully make pickles.

So I thought for sure, if I were to get some, that the poor little things would only end up dying a terrible, terrible death all alone and abandoned way in the back of the fridge.

Little did I know that pickle making couldn’t be easier. Well, fermented pickles, anyway. Basically, all you really need is a few fresh as can be pickling cucumbers, a little bit of salt and some bottled or boiled water.

Oh, a large air tight jar. That’s it. You don’t NEED anything else.

Right, there’s a good chance that you’re gonna want to add a few aromatics to that jar, but that won’t really add to the difficulty level and will only take a few more seconds of your time, so that doesn’t count… 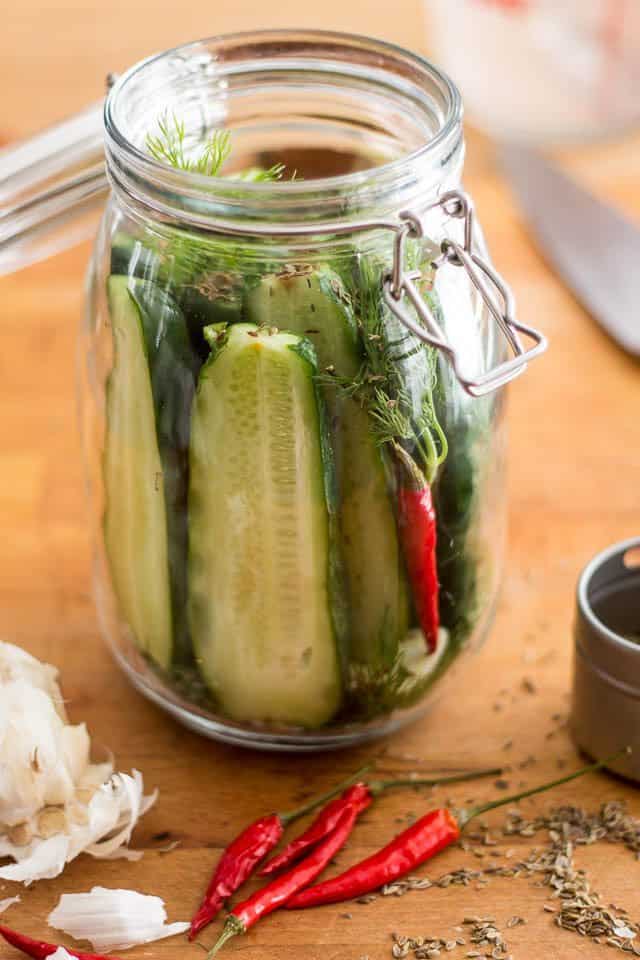 What you want to do is simply cut your cucumbers in half (or leave them whole if you prefer), cut the ends off and stuff as many of them as will fit into your jar. Then throw your favorite spices and aromatics right in.

I chose to use garlic, dill (both in the fresh and seed form), hot peppers and pickling spices. 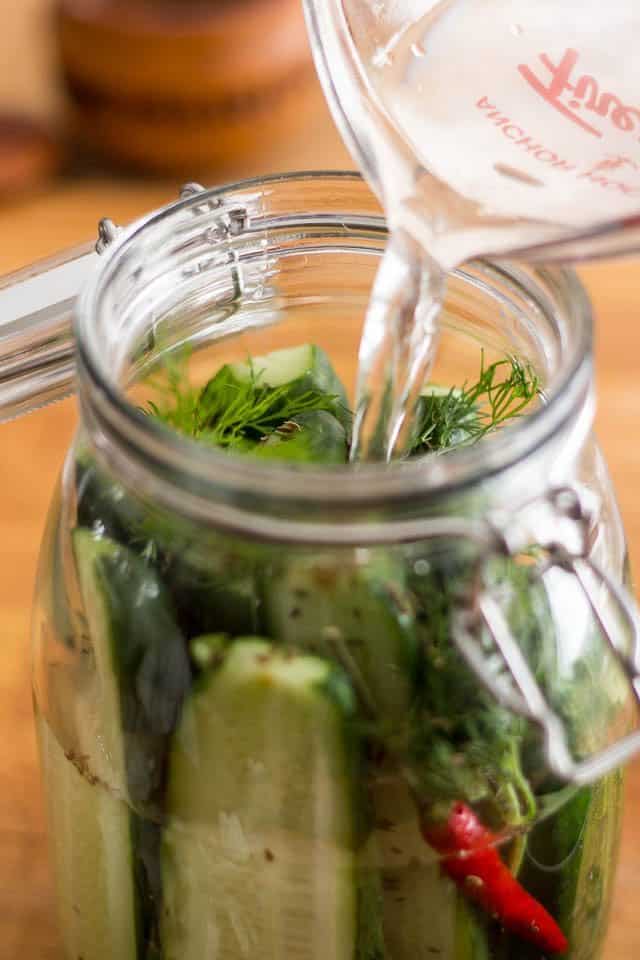 Mix your salt and water until the salt is completely dissolved then pour that right into the jar until the pickles are completely covered. You need a ratio of about 1 tsp of salt per cup of water.

If you wanted to draw more flavor out of your spices, you could also do this is by heating the dill seeds, pickling spice, salt and water until it comes to a simmer then let this brine come back to room temperature before adding it to the jar.

Once the pickles are completely covered with the brine, find something that you can shove in that jar to keep them entirely submerged. It is very important that they remain under the brine for the whole duration of the fermentation process, else they will start developing some mold and your batch will be ruined. So long as they remain under the anaerobic safety of the brine, they’ll be fine.

It’s also important that you leave about 1 inch of head space to allow the brine to bubble up without the jars exploding on you. 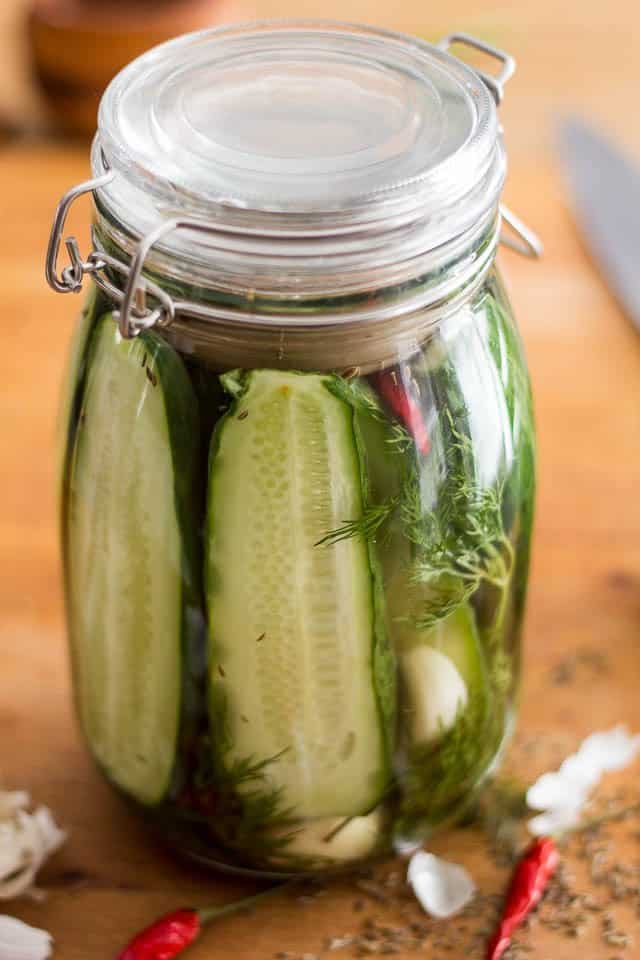 Now close the lid but not hermetically. A lot of carbon dioxide will be produced during the fermentation process and that needs to escape somehow. If like me you like to use hinged top glass jars, simply remove the rubber thingy that makes them air tight then close the lid normally. Undo the clip to loosen the lid once in a while to to allow some of the carbon dioxide to escape.

If you’re using Mason type jars, just make sure you screw your covers rather loosely. Again, it might be a good thing to loosen the lids all the way once in a while to let the excess gas escape.

That’s it. It’s that easy. Now all you need to do is leave this jar of cucumbers on the counter for 7 to 10 days, until the fermentation process is done turning your cucumbers into pickles. Yep, the magic happens all by itself. You won’t need to perform any crazy chemistry wizardry, I swear. 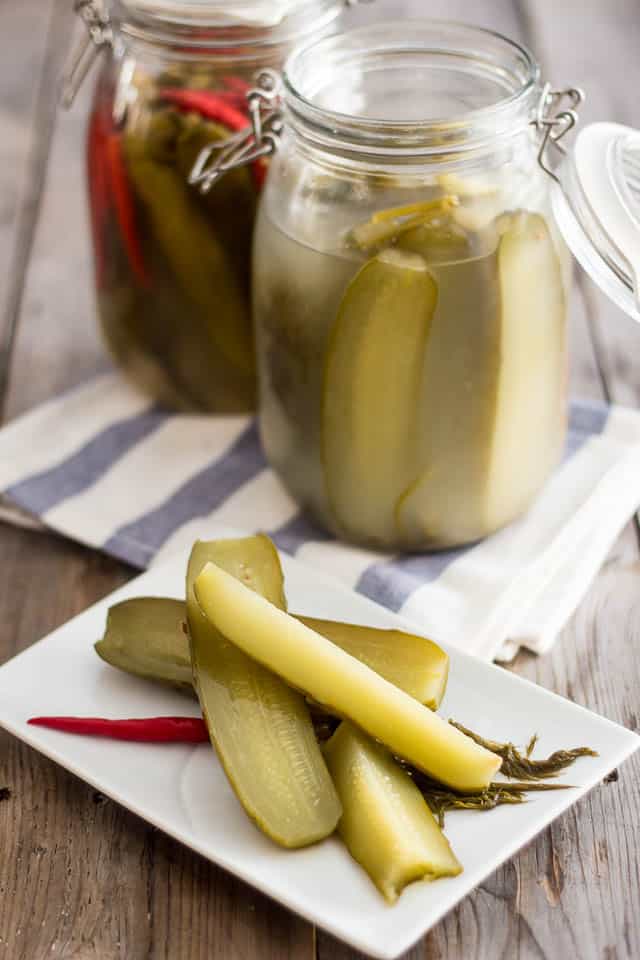 Before you know it, your cucumbers will have turned into delicious pickles. Now, I strongly suggest that you refrigerate them for a couple of hours or even overnight before you try them, otherwise, you might find them to be a bit on the mushy side. Mind you, I find that this much holds true even for store-bought pickles. A cold pickle is definitely a crispier pickle! And the fresher the cucumbers you use to start with, the crispier your pickles will be!

Notice how the brine got all cloudy? That is perfectly normal and is caused by the lactic acid bacteria during fermentation. So don’t flip when that happens to you. It will eventually settle after a couple of weeks in the fridge (if you manage to keep your pickles that long) and will become clearer.

Now, if you are a fan of really vinegary pickles, know that fermented pickles do not taste much like vinegar at all. Just like good old fashioned pickles, they are salty, garlic-y, somewhat tangy, crunchy, but not vinegary. So if you want them to have a real vinegary flavor, you can always add a couple of tablespoons of vinegar to the jar after they are done fermenting and give them another week to soak in that newly added flavor before you eat them. 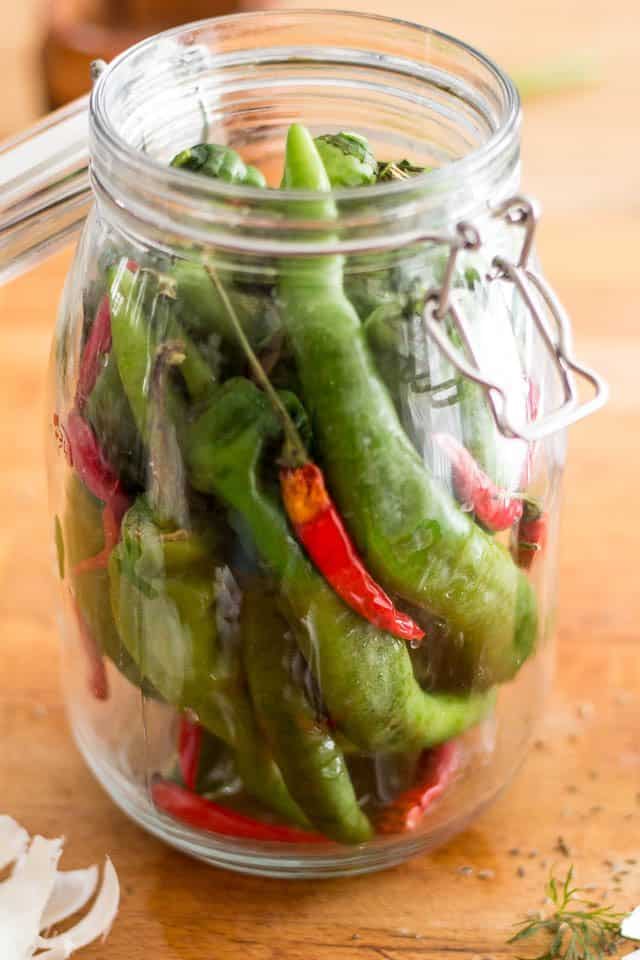 If like me you’re into hot peppers, why not whip of a jar of those while you’re at it?

The process is even easier: stuff peppers in jar, cover with brine, close the lid. 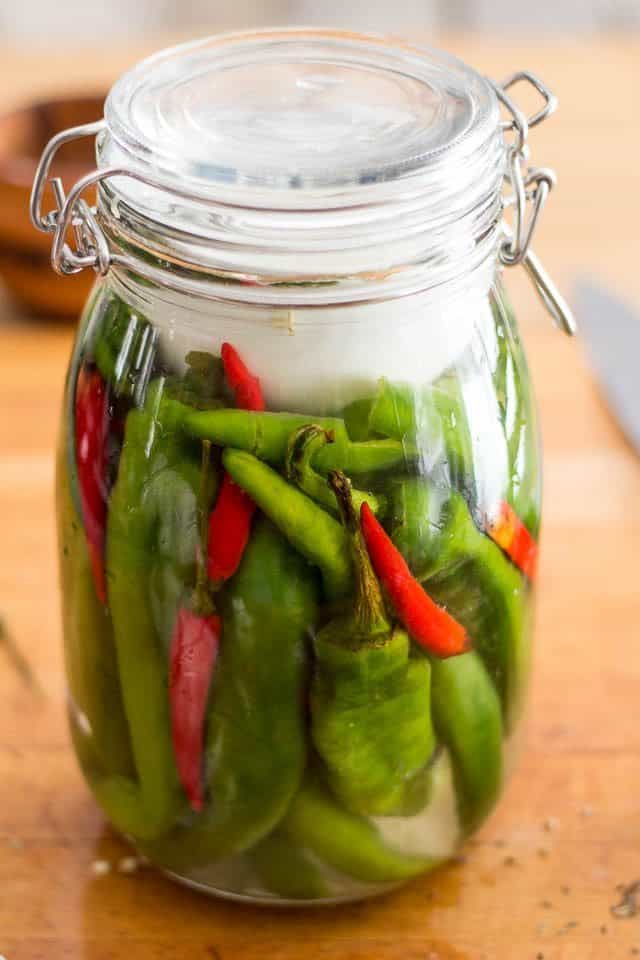 Again, just make sure you find something that you can fit in there, a small bowl or lid, to keep the peppers below the water line.

Leave these on the counter right next to your cucumbers and wait for the magic to happen. 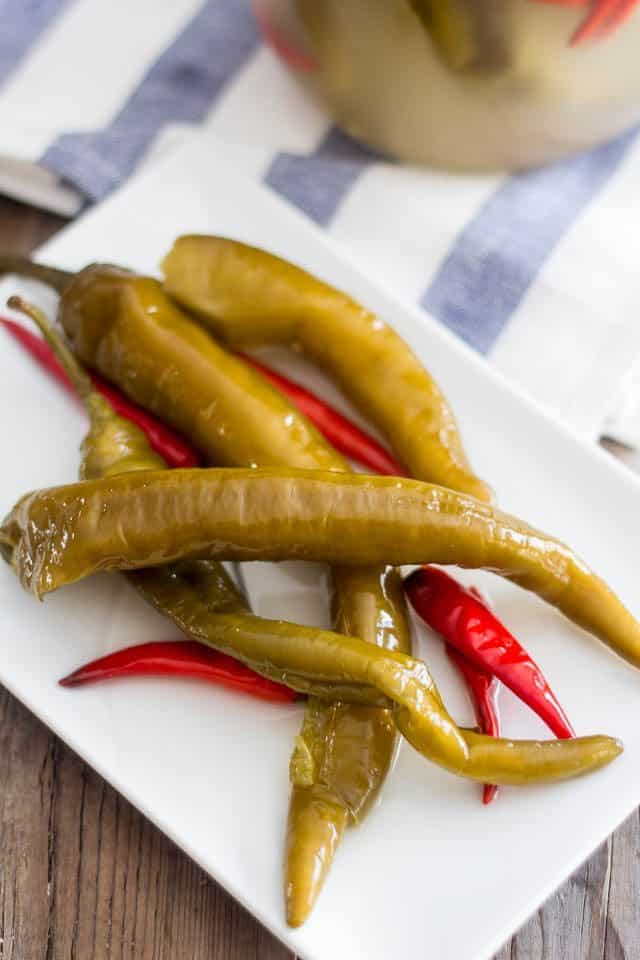 Frankly? I’m never gonna buy these ready made ever again. Making my own is way too much fun and so rewarding. Plus, I know exactly what goes into my jars!

So there you have it, I hope that this post inspired you to try your hand at making pickles at home and that next time you come across beautiful, fresh pickling cucumbers, you’ll be tempted to take a few home with you… I know I will. No way I’ll ever be able to resist them anymore. 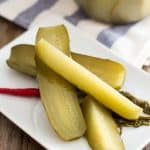 « Previous Post3 PHASE PALEO – Transition your family to the Paleo Lifestyle in 3 easy steps – A book review
Next Post » Homemade Beef Jerky: In with the yummy – Out with the nasty!