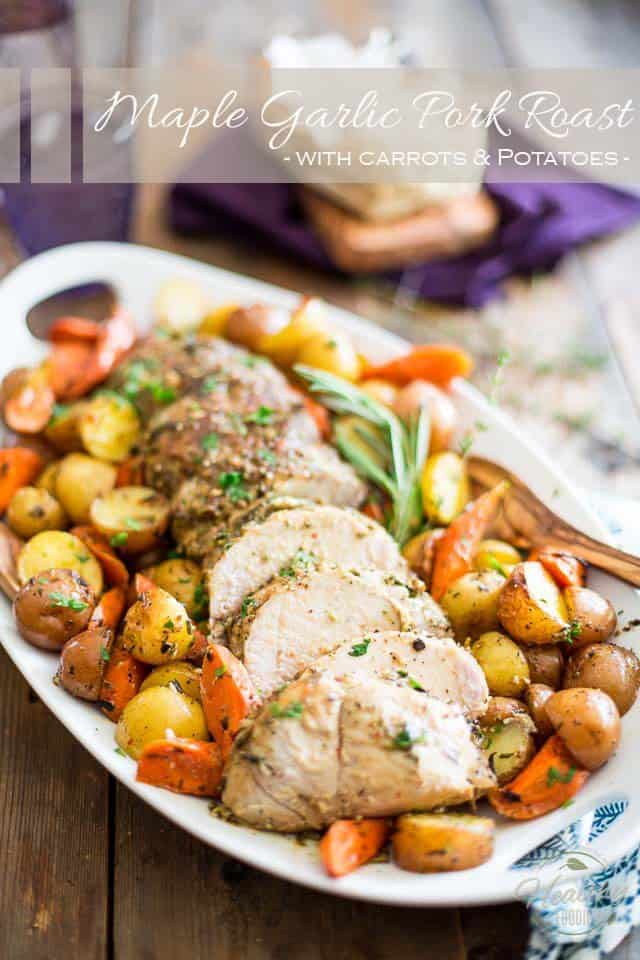 I’ve a funny anecdote for you that has nothing to do with this Maple Garlic Pork Roast… but we’ll get back to it right after, don’t worry!

My daughter and baby grand-daughter have been spending a couple of days at home with me; last night, I thought I would give my daughter a bit of a break and let her catch up on her sleep, so I took the baby with me in my room for the night.

When morning came, I figured I’d let my daughter sleep some more and that I would take care of feeding the little one. Hey, surely I could manage that! I started with a bottle of milk, which went down faster than it took me to warm it up, so I proceeded to feed her a little bit of solid food. She ate well but not so much, really, because she’s currently teething, so she’s been kind of crabby lately. Plus, it’s like a million degrees out, you know, so she probably isn’t all that hungry to begin with. 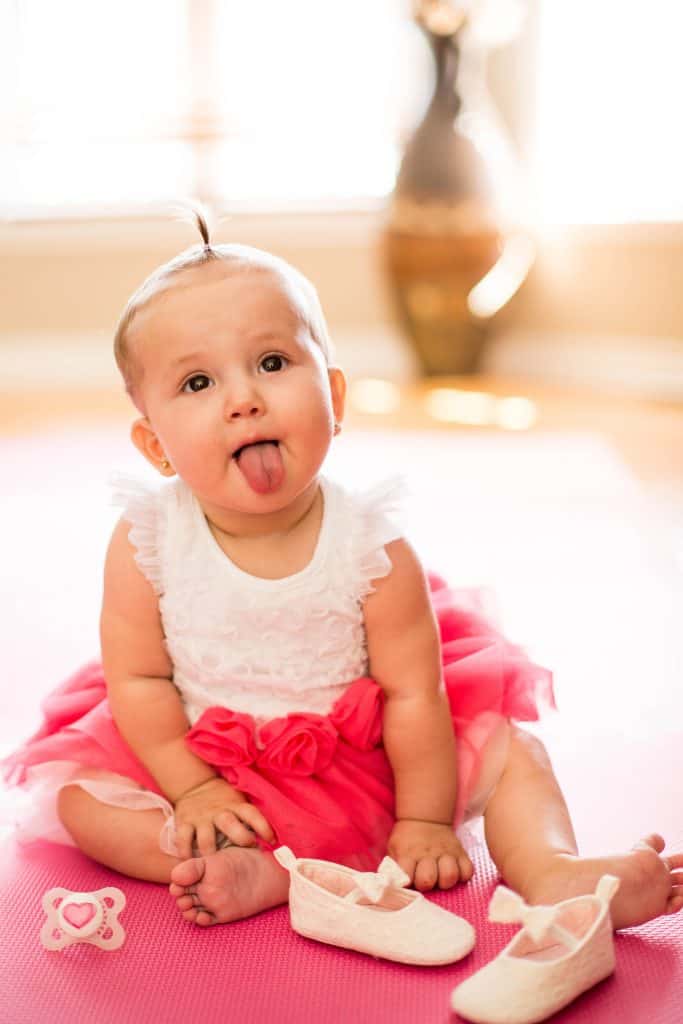 When mom got up, she asked how things went and I’m like, all proud: “She slept beautifully! I changed her and gave her her bottle, and then I fed her breakfast, too!”

So my daughter’s like: “Really? That’s very nice of you! What did you feed her?”

My answer: “Well, I wasn’t too sure what to give her, so I just looked in the fridge to see what she had in there and opted for a meal of chicken and sweet potatoes, with a little bit of mango/strawberry puree”.

The look on her face was priceless: she smiled at little Matilde and went: “Ha! So you had a typical grandma breakfast this morning, didn’t you?” It didn’t really add up in my mind, until she turned to me and said, with that same smile on her lips: “She normally has cereal and maybe a bit of fruit for breakfast, you know…”

I’d totally forgotten that those even existed! For me it was just totally natural to feed her meat and veggies for brekkie. Oh well. I’m sure that Matilde didn’t mind and that she won’t resent me, either.

Not sure I can pull that one off when she’s 5 years old, though… 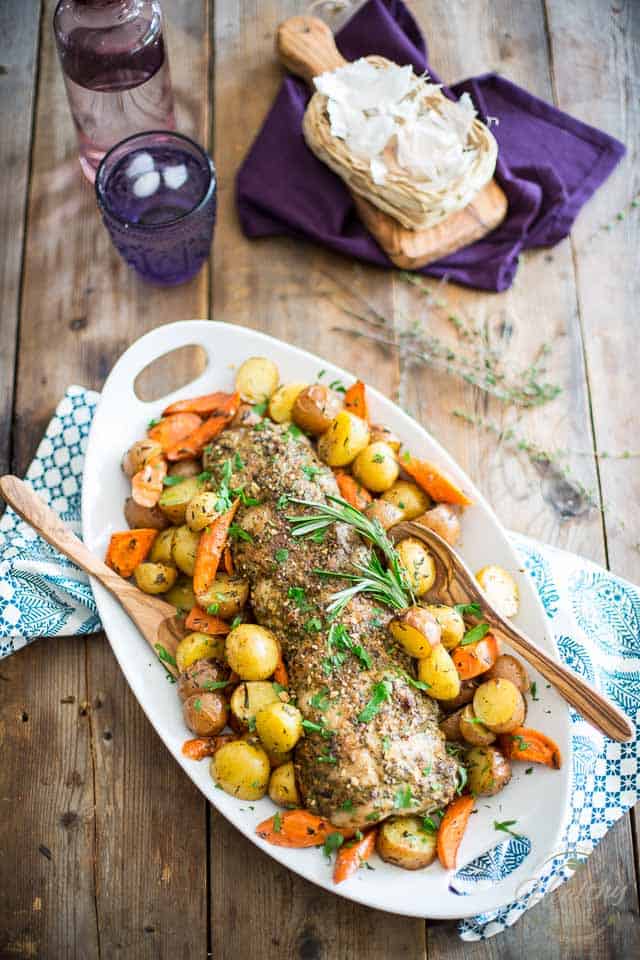 Back to this Maple Garlic Pork Roast with Carrots and Potatoes…

I know it’s a strange choice of dish to be making at this time of year, especially since I just said it’s a million degrees out. But the thing is, you see, summer has been acting really strange this year. I don’t know if it’s the same where you live, but here we keep getting days that are so incredibly warm we can barely stand to have any clothes on, only to be so cold the next day, we literally have to take out our long sleeved sweaters.

On those days, I really don’t mind warming up the house by turning the oven on, shoving all my ingredients in a single pan and then letting the oven do all the work for me.

While that’s happening, I can take care of other fun things, like taking pictures of my precious grand-baby girl, for instance!

If it’s currently too warm where you are to whip this one up, make sure you pin the recipe, or save it somewhere, ‘cuz I’m sure you’re going to appreciate this recipe: not only is it super tasty and easy to make, but it’s the kind of dish that just makes itself and that doesn’t dirty up the entire kitchen.

Oh, and it makes the entire house smell soooooo good, too! 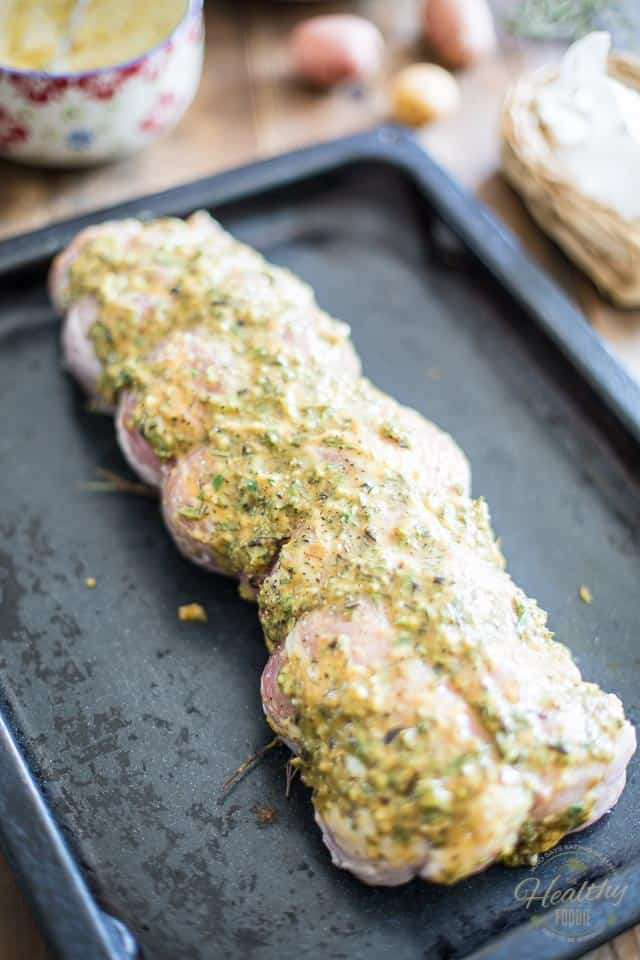 First thing you must do is start the heater, erm, I mean preheat your oven to 375°F.

Next, place your roast in a broiler pan and spread this mixture all over its top; set aside. 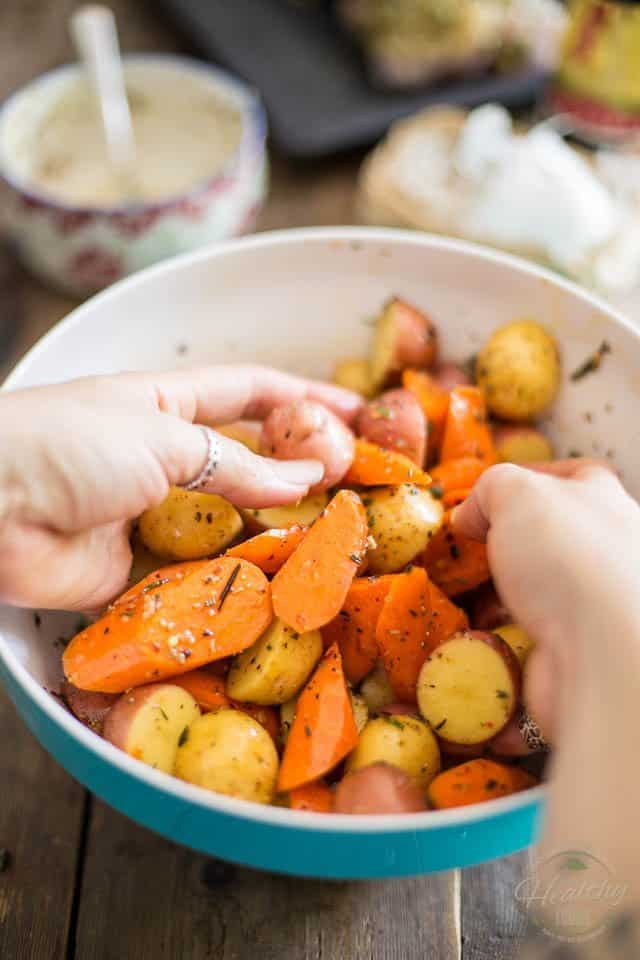 Prep some potatoes and carrots and place the vegetables in a large mixing bowl.

Then, in that same small mixing bowl you just used a minute ago for the mustard and maple sugar mixture, put some avocado oil, maple sugar, rosemary, thyme, salt, pepper and chili flakes and mix until well combined. Pour that over the carrots and potatoes and mix with your hands until all the vegetables are evenly coated. 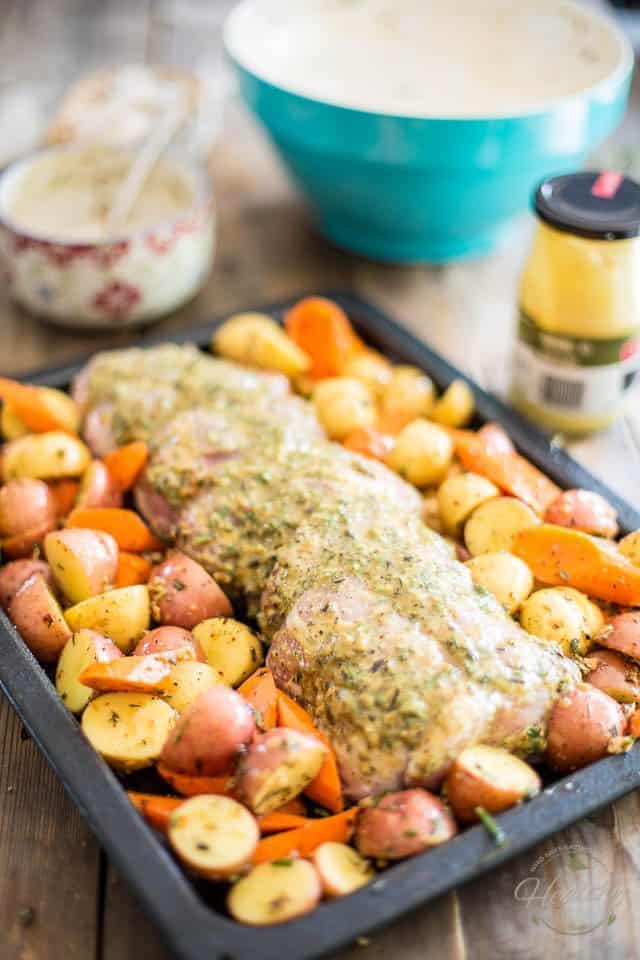 Place those vegetables in the broiler pan around the pork roast, cover everything up lightly with aluminum foil and bake in the oven for 30 minutes; then, remove the foil (hold on to it, you’ll be using it later) and continue baking for an additional 25 to 30 minutes, or until the roast takes a nice golden coloration and the veggies become soft and fork tender. 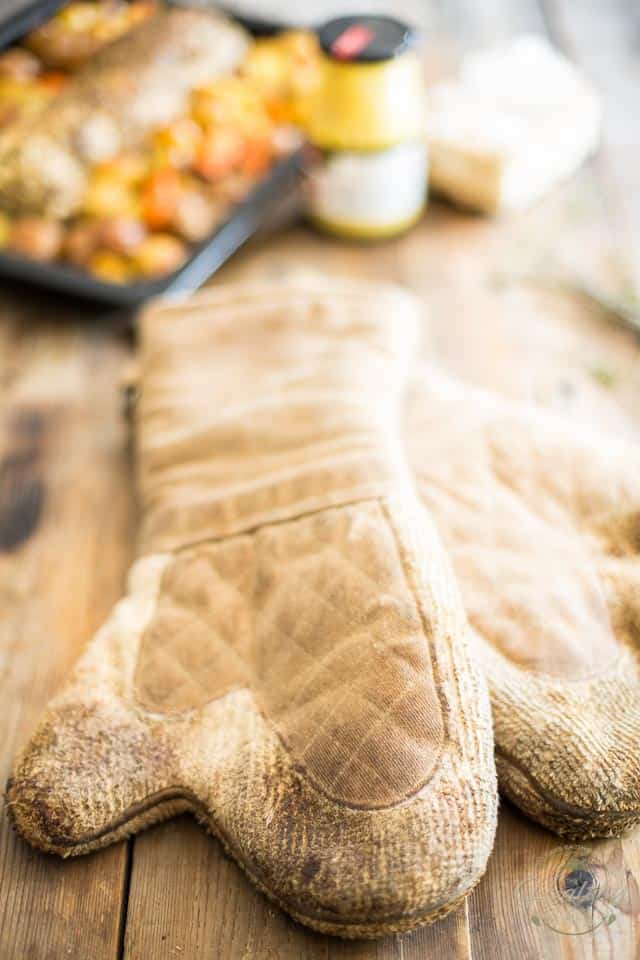 While taking those pictures, I kinda realized that *maybe* it was time I invested in a new pair of oven mitts, what do you think?

I think these ones have done their share of work, now… I must’ve had them for like 10 years! But they served me so well, and do such a great job, too! I doubt I can ever find a pair that I will love as much as I love these, and that will be so darn efficient at keeping the heat away from my hands.

Gah! I *might* start keeping an eye out for a replacement pair. Who knows, maybe within the next few years I’ll get lucky and find my perfect match. 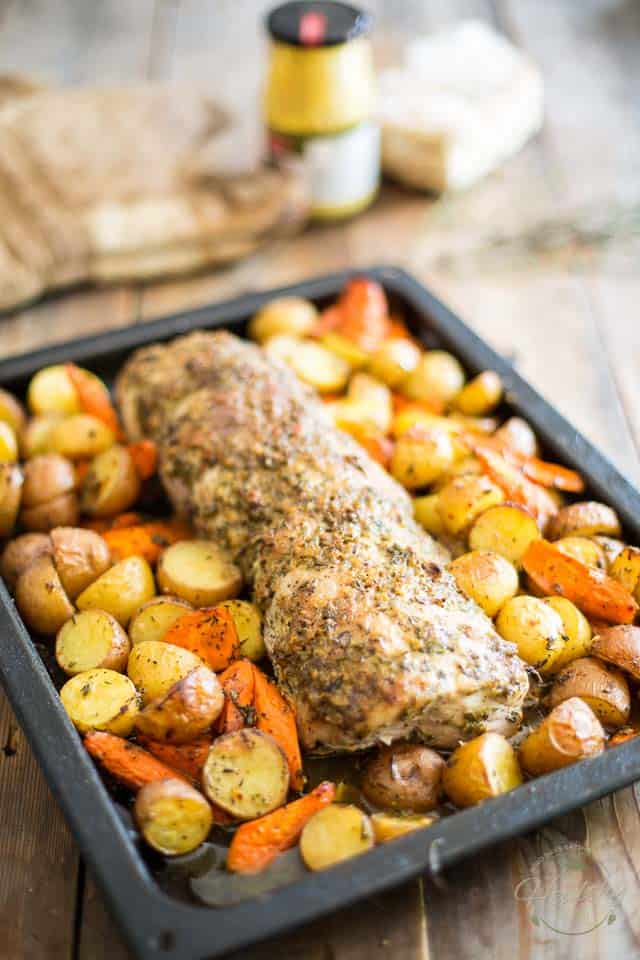 Alright, so after your pork roast has baked for an hour, take it out of the oven (with the help of your trusty oven mitts!) and sprinkle an additional tablespoon or two of maple sugar over the entire dish; switch the oven to broil and put the roast and potatoes under it for about 5 minutes or until a nice crust forms over the meat. 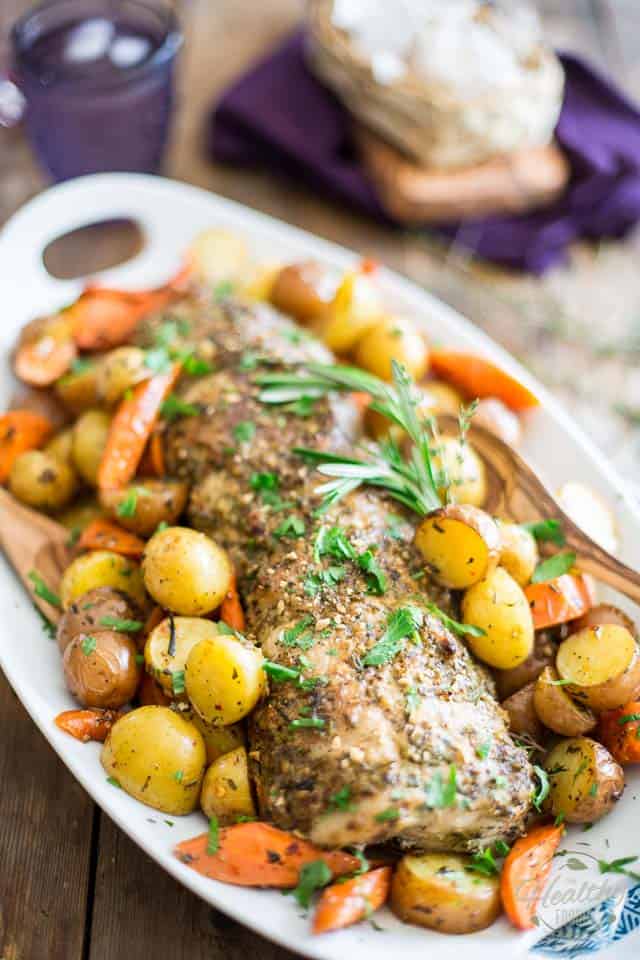 Remove the pan from the oven for good this time; lightly tent your roast and veggies with the piece of foil that you saved earlier and let them rest for 5 to 10 minutes.

Carve the meat (don’t forget to remove the twine, if present) and serve, garnished with chopped fresh herbs. 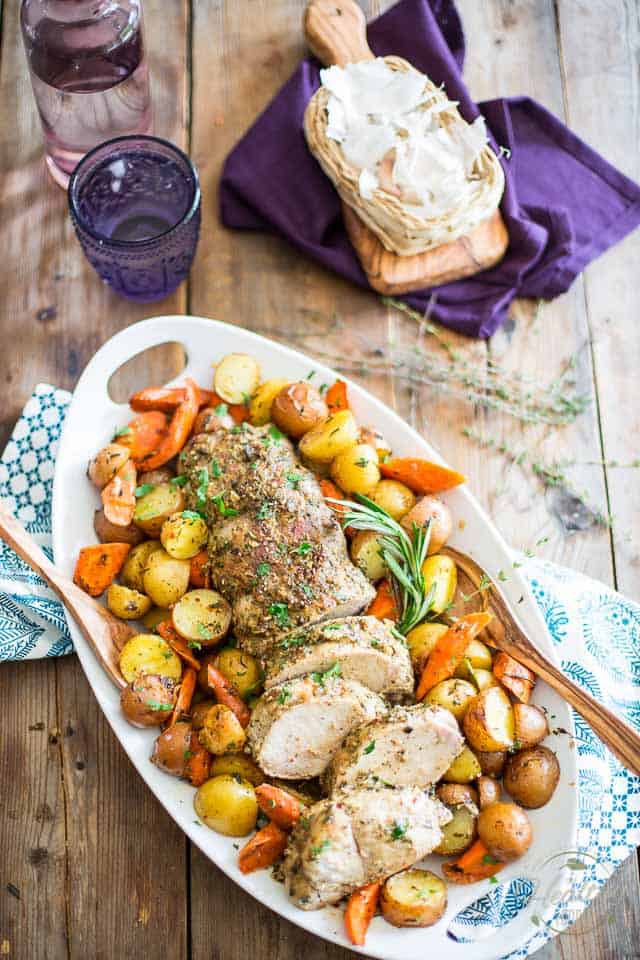 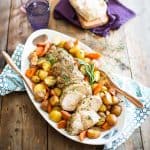 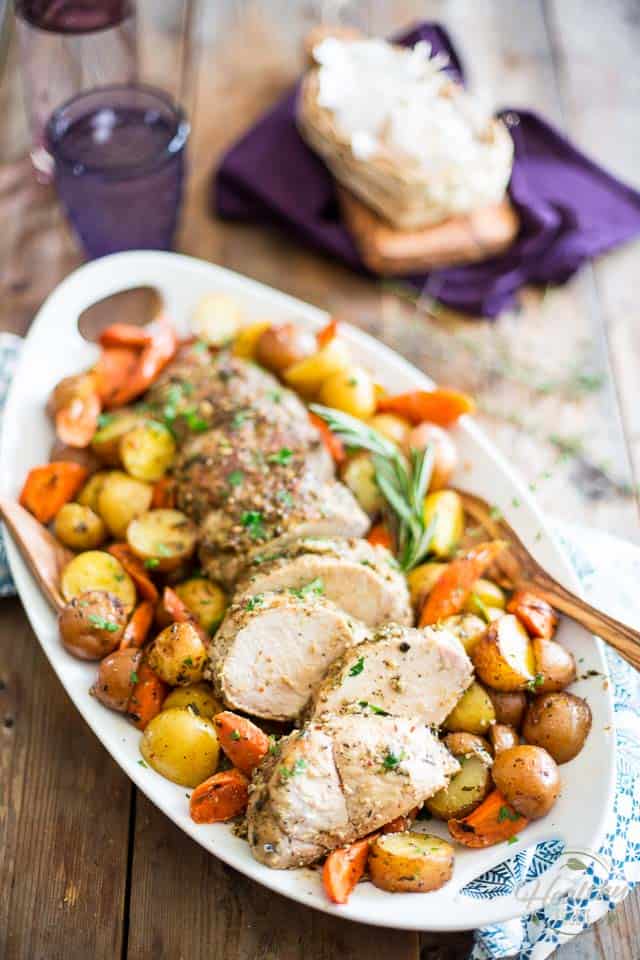