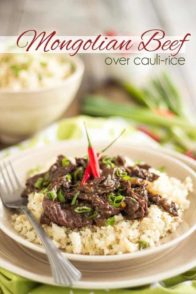 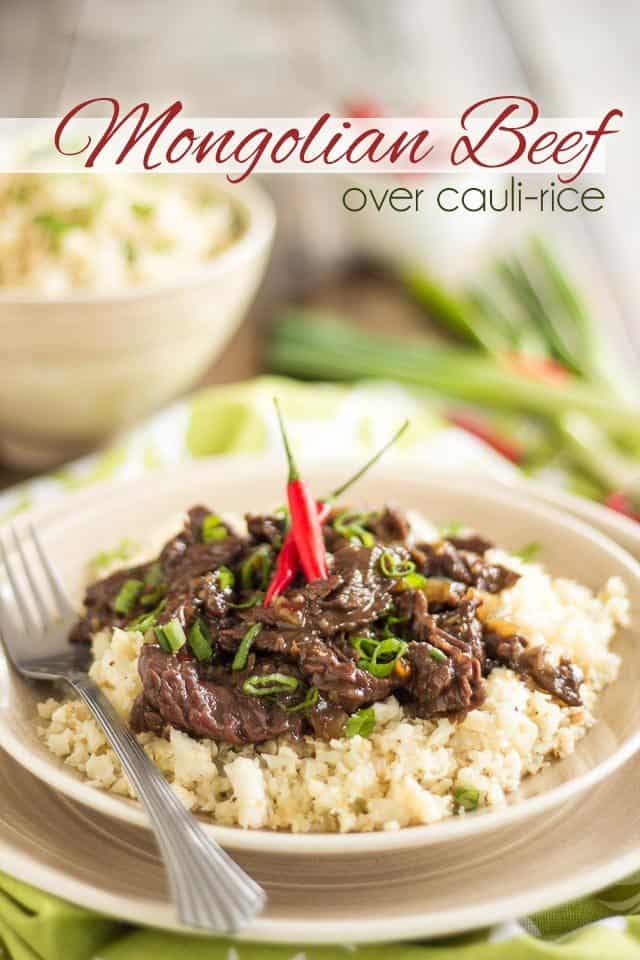 It’s been a while since I last reviewed a cookbook for you has it not?

Trust me, it’s not due to a shortage in selection.. in fact so many amazing paleo cookbooks came out lately, I think I could easily review one of them every week and would still be at it long after the snow has all gone…

It’s just that… you know me and following recipes. I’ve always had a problem with that. But seriously, it’s something I should make a habit of doing more often because it helps me expand my horizons, discover new techniques and new flavor profiles that I would’ve otherwise never even thought of trying out myself.

Take this Mongolian Beef recipe, for instance, which I took right out of The Paleo Kitchen by Juli Bauer of PaleOMG and George Bryant, of Civilized Caveman Cooking.

When I started making it, I thought to myself: “WHAT??!?! They’re using a full half cup of coconut aminos? NO WAY! This is WAY too much, I’m sure it’ll taste way too strong…”

Then I got very skeptical about the way they went about cooking their flank steak. I mean, all they did was add it to the simmering liquid, without any other form of ceremony. I thought for sure it was going to be tough as hell.

But, hey, I had decided to give the recipe a go and follow it to a T, so this is exactly what I was gonna do. 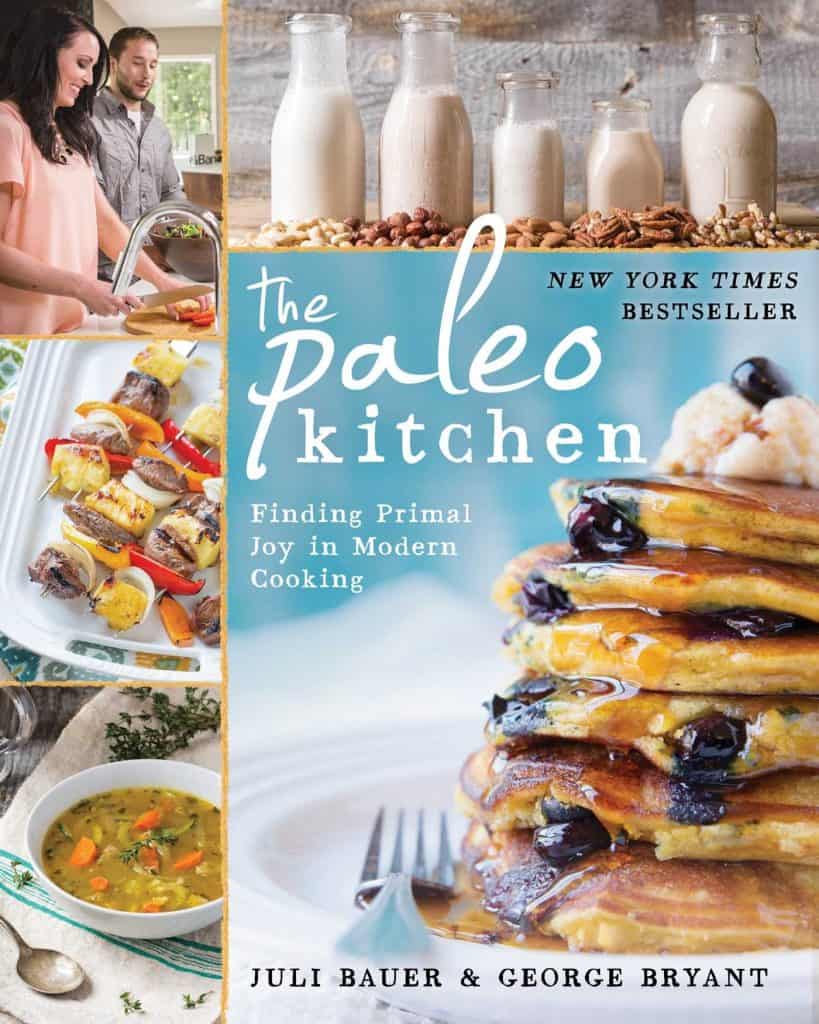 Well… I have to admit that this dish was DARN DEEEELICIOUS!!!! And I really do mean that. One of the best Asian dishes I’ve had in years, INCLUDING those that were consumed in fancy specialized restaurants.

The beef came out surprisingly tender and delicate, the sauce was thick and silky and it EXPLODED with flavor without relying on MSG or that other “secret ingredient” that makes most Asian food so tasty… But this Mongolian Beef is deliciously and NATURALLY salty, tangy, spicy and sweet. Perhaps a tad too sweet for my taste, but you know how Asian food sometimes tends to be on the sweet side…

I’ll be honest, though: I found the portion to be a little bit too modest for my appetite. I ended up eating the entire recipe in 2 sittings… and all I wanted to do was whip up a fresh batch as soon as the last bite of that second portion had been swallowed. Sadly, I was all out of flank steak. GAH! I will have to get more, and the sooner the better, because trust me, I definitely want to be making this again, and again, and again.

Mind you, I’m thinking maybe I should give some of the other recipes in the book a try too, because trust me, The Paleo Kitchen has A LOT to offer in that department. Each and every single recipe looks totally delicious and the pictures are simply mouth-watering.

Plus, you’ll find many helpful resources to help you stock a paleo kitchen, make the transition to paleo and stick with it, as well as hints and tips on eating out and friendly advice on how to keep it all fun!

In all honesty, this is a book that I strongly recommend you add to your collection. You’ll be super glad you did.

And while you’re waiting for the mailman to bring it to you, I say you should give this Mongolian Beef recipe a go… 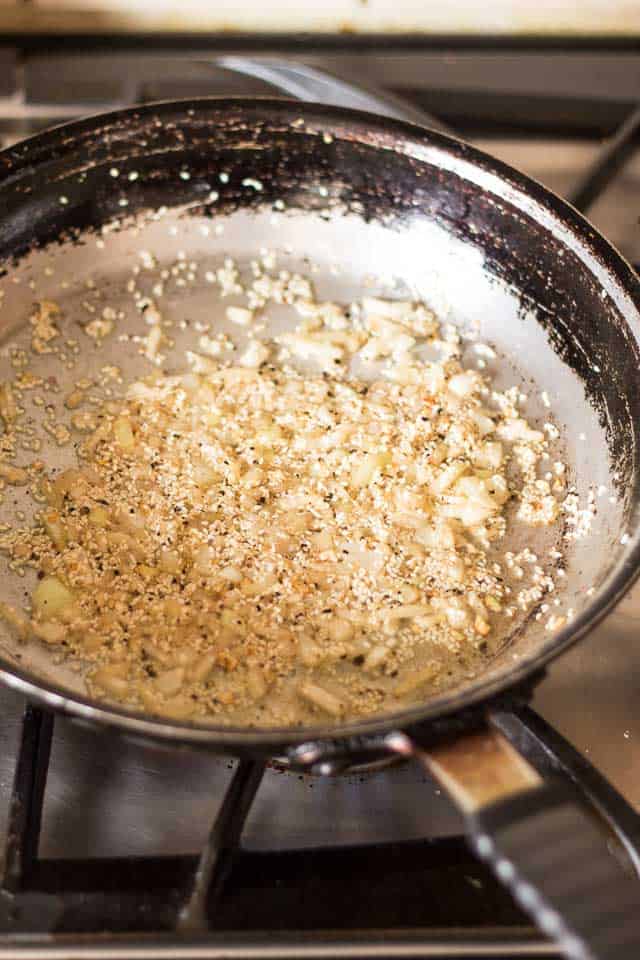 First, you’ll need to make some Cauli-Rice. In their book, Juli and George direct you to a different page where you can find their recipe for Cauliflower Rice. I, however, chose to make my own version, which I am of course sharing with you…

Start by cutting the cauliflower into small florets and then place in the bowl of your food processor. Pulse a few quick times (about 10 to 15) until it resembles the texture of rice. Then, add the coconut oil to a large skillet set over medium heat and cook the onion, garlic, sesame seeds, salt and pepper until fragrant, about 5 minutes. 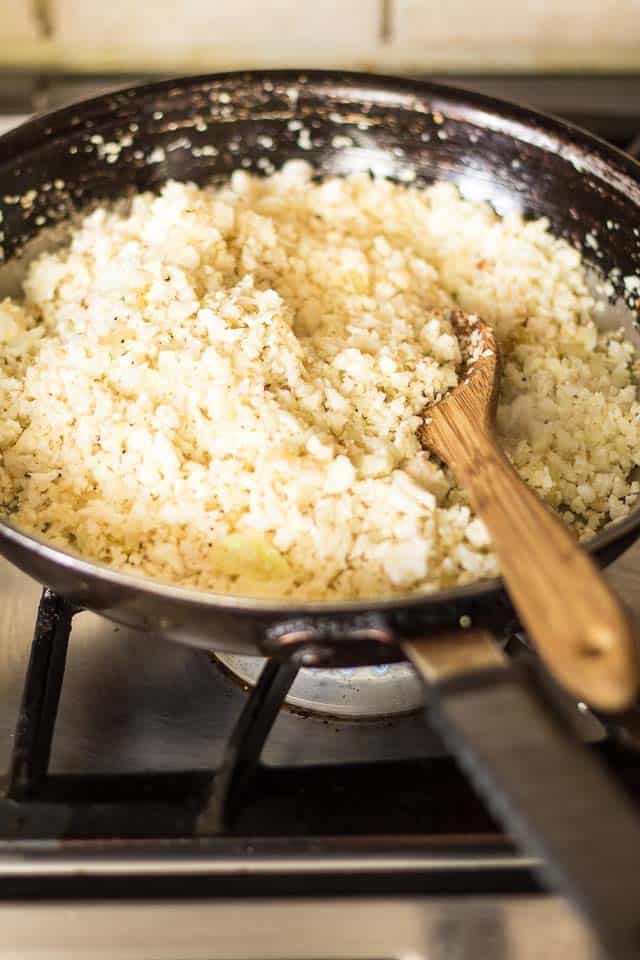 Add riced cauliflower, rice vinegar and sesame oil and continue cooking for an additional 5 to 8 minutes, until the cauliflower is cooked but remains a tad crunchy.

Kill the heat and set aside. 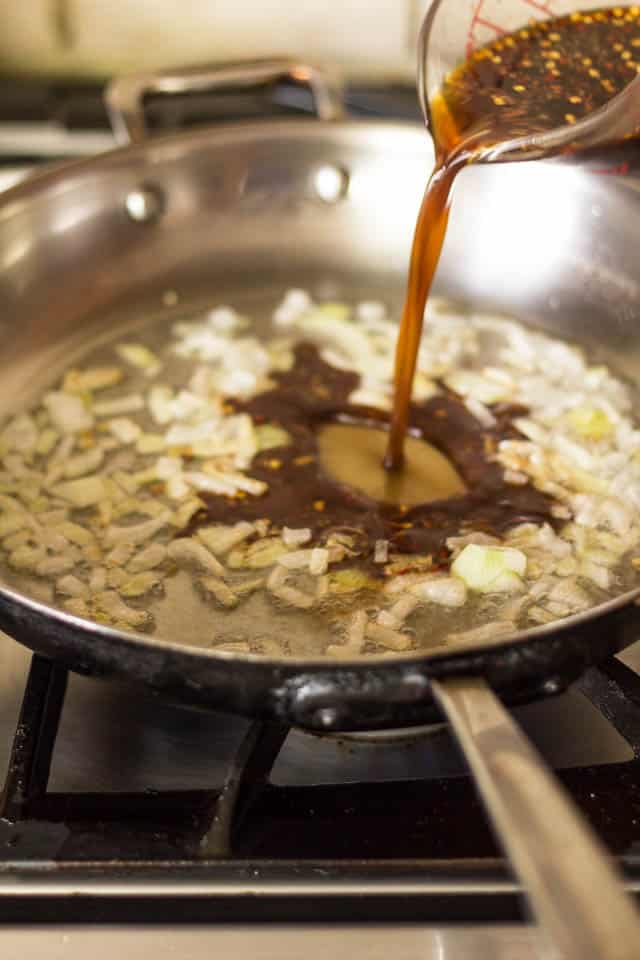 While the rice is cooking, start working on the Mongolian beef. Heat the coconut oil in a large pan over medium heat and then add the onion and cook for 2 minutes, until slightly softened.

At this point in their recipe, Juli and George have you add some coconut aminos, honey, garlic, ginger, red pepper flakes and a pinch of salt and pepper directly into the pan, but I found it easier to mix everything in a large glass measuring cup first, while the onion was sweating, and then pour it all into the skillet in one go.

I then let this come to a boil, per the original instructions. 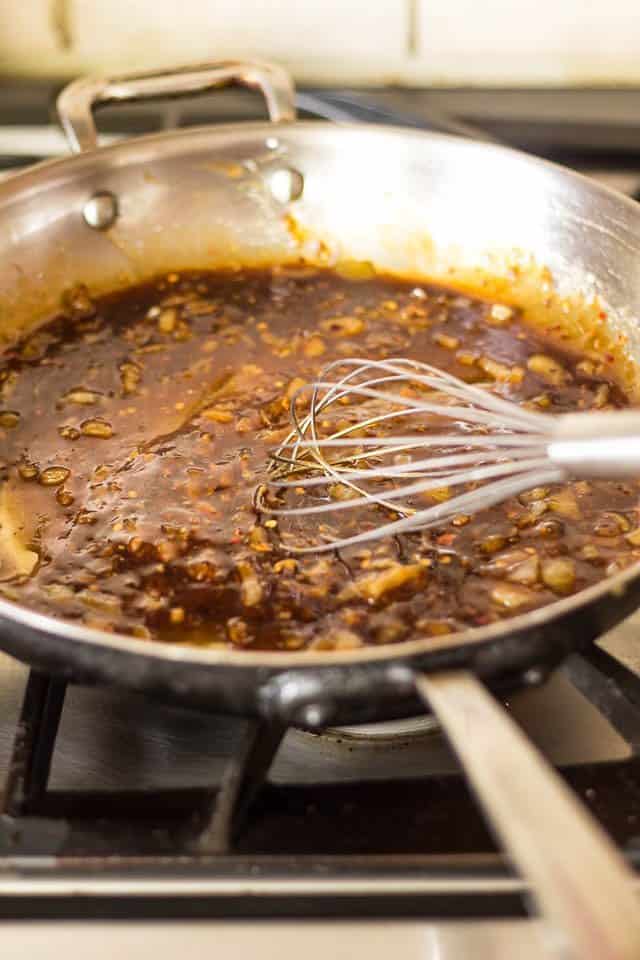 Now time to add the arrowroot powder to the pan while continuously whisking until the mixture is thickened, which should take about a minute.

While the original recipe called for 2 tablespoons, I found that 1 tablespoon was ample enough to thicken my sauce, as you can clearly see in the picture above. 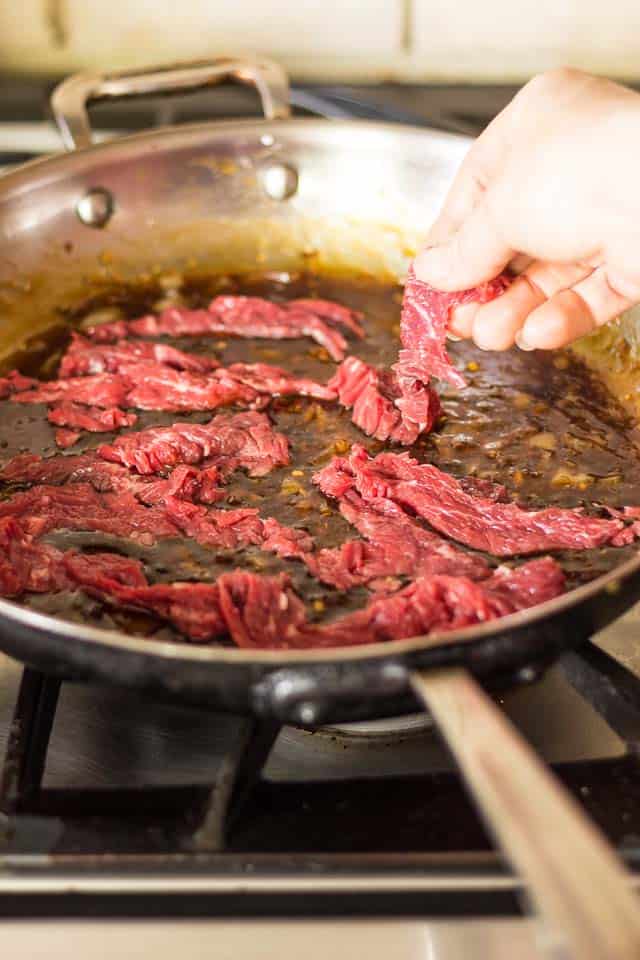 Then the steak slices go straight into the pan with the sauce, with no other form of ceremony. Juli and George specify that you should distribute them throughout the pan so as not to overcrowd them. 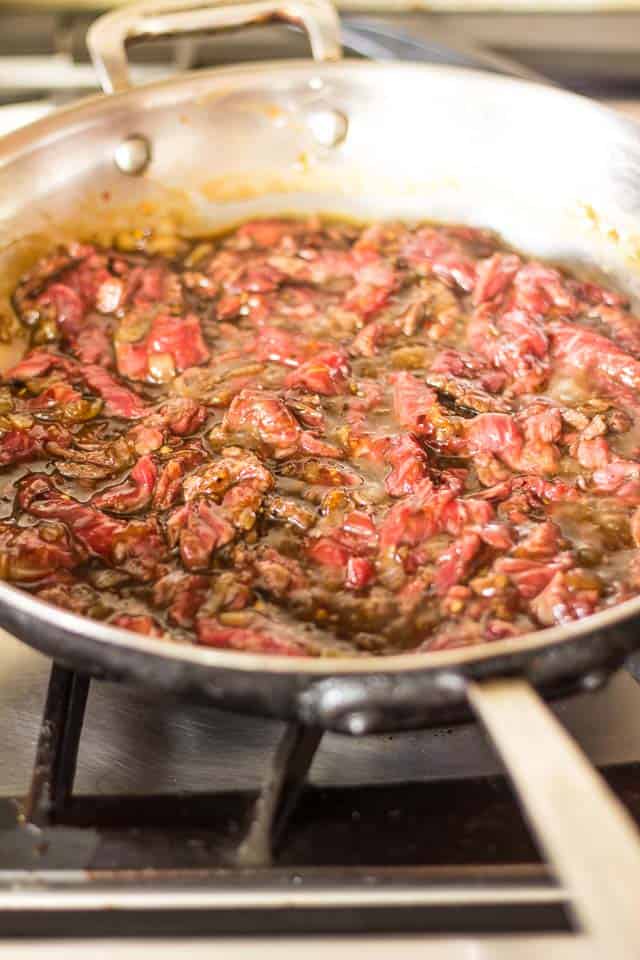 However, I found it kind of hard to do that… maybe my skillet wasn’t big enough?

I ended up adding all the beef at once and then I simmered the meat in the sauce for about 5 minutes, or until almost no red meat was apparent. 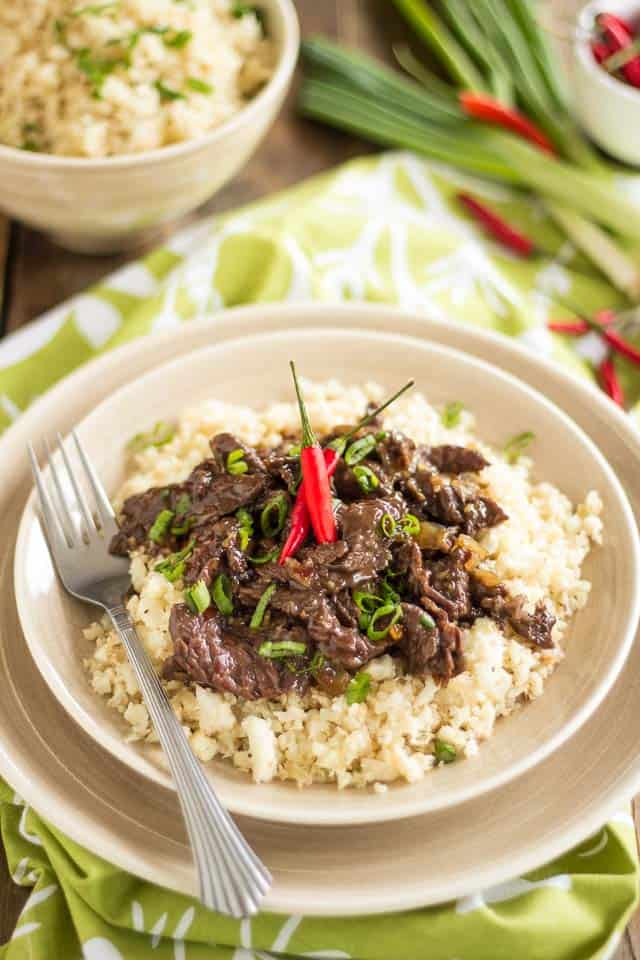 Then, as soon as the meat was cooked, I served this over a bed of cauliflower rice, topped with some chopped green onion.

And that’s when I fell in love. This instantly became my favorite Asian dish in the whole wide world.

Now time for you to try it… but go and order the book, first! 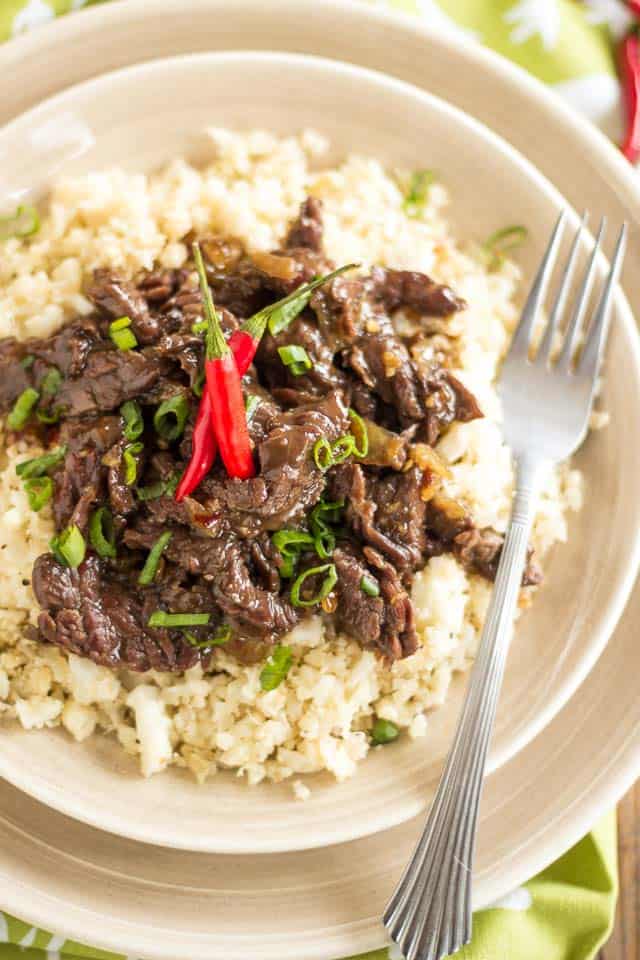 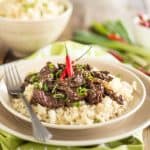 *The Mongolian Beef Recipe can be found in The Paleo Kitchen 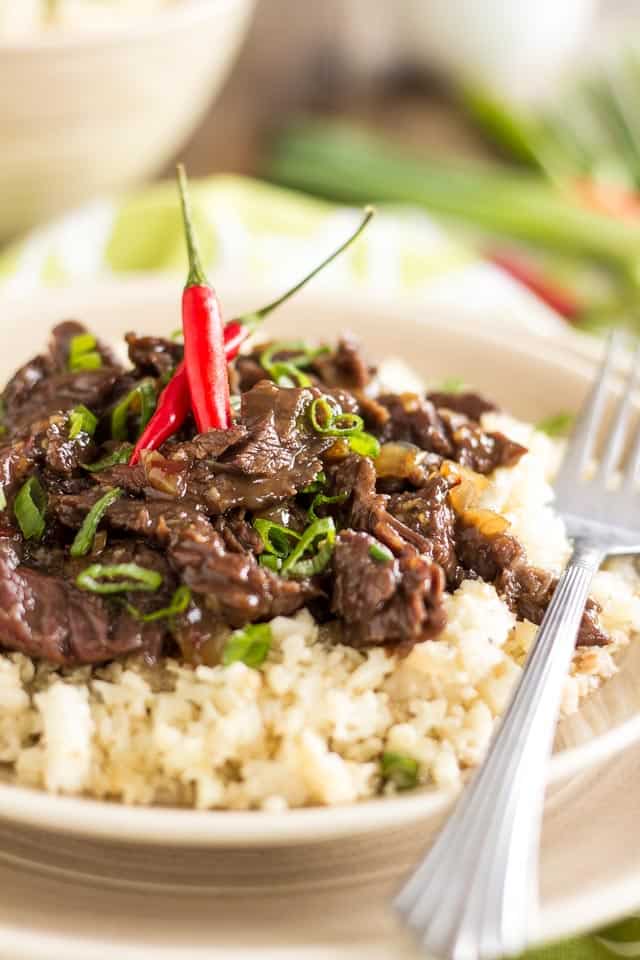