I woke up one morning with this super strange craving for something I hadn’t had in years: Paëlla!

I can’t even say that I have a very special affection for that particular dish, so I have no idea where the craving came from. Only, it’s something that I used to eat in my past life and appreciated very much.

It was one of those meals that we would think of as a true feast, one that we would save for special occasions, you know, for it calls for so many different types of meats and seafood, I guess that in our mind’s eye, we always thought of this one as a fairly pricey dish to make.

And also too, one that will require you to spend quite a bit of time in the kitchen in order to get it done.

Still. My brain had decided that it wanted Paëlla, and I was to give it Paëlla. That was non-negotiable and I knew it would never leave me alone. Hey, it didn’t even fall for the “but we can’t have rice” argument.

There was only one thing left for me to do: give a fair attempt at making a Paleo version of Paëlla.

What a SPECTACULAR and GRAND DISH that one ended up being. No word of a lie, that Paleo Paëlla was even better than the original I remembered. 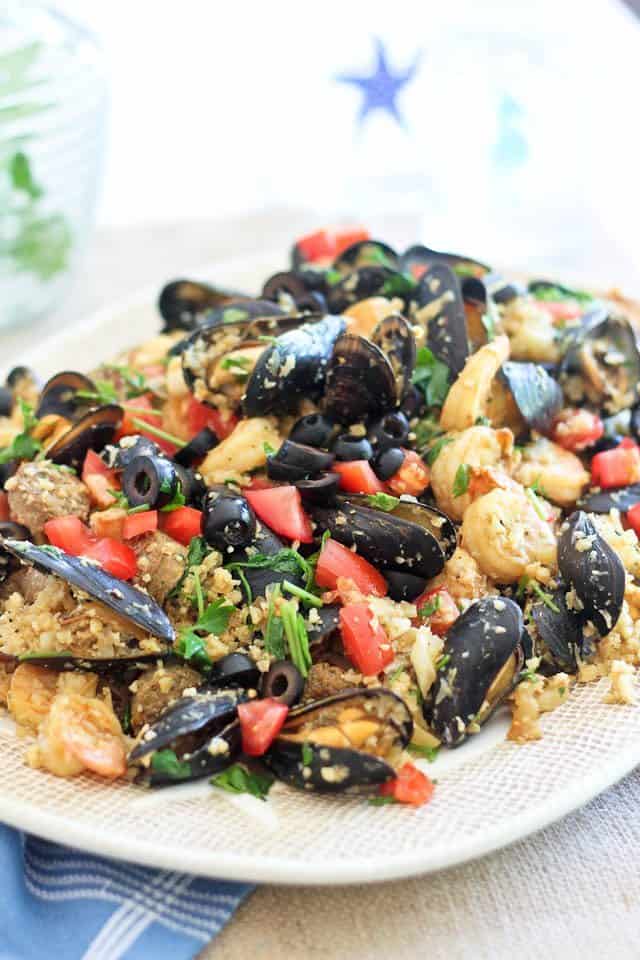 The results FAR exceeded my expectations, and that of my brains too!

Plus, it wasn’t nearly as complicated, extensive OR pricey to make as I remembered it to be. In fact, the only real challenge with this recipe lies in the fact that you need to get your hands on a skillet large enough to accommodate all of them gorgeous ingredients.

Other than that… piece of cake!

Without so much effort on your part, you will end up with a spectacular looking and tasting dish that will no doubt impress the pickiest of guests. 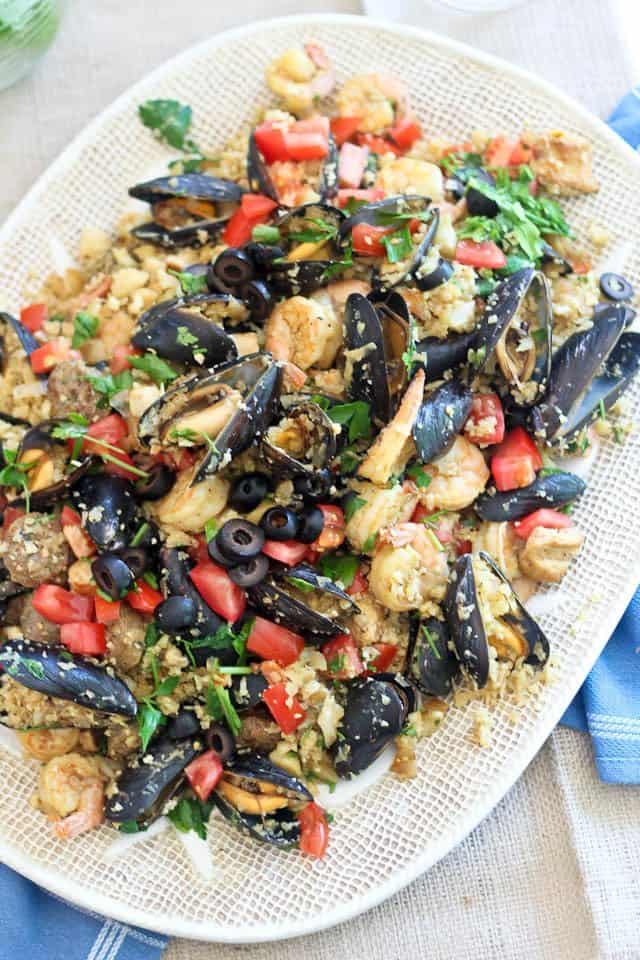 The only flaw, if there should be one, that I found with this recipe is that cauliflower doesn’t do quite as good a job as rice at absorbing water.

Soooo, when you add the fresh mussels, they will open up as they cook and release all of the water they’d been holding up in their shells until now. As a result, you will end up with quite a bit more liquid than you might care for at the bottom of the pan.

Your other option would be to carefully drain the excess liquid, or serve your paëlla with a slotted spoon so the liquid stays in the pan.

Or, which is probably what I will do next time, you could steam the mussels for a minute or two before adding them to your paëlla. This way, the mussels would open up and release their liquid prior to getting mixed with the rest of the ingredients. 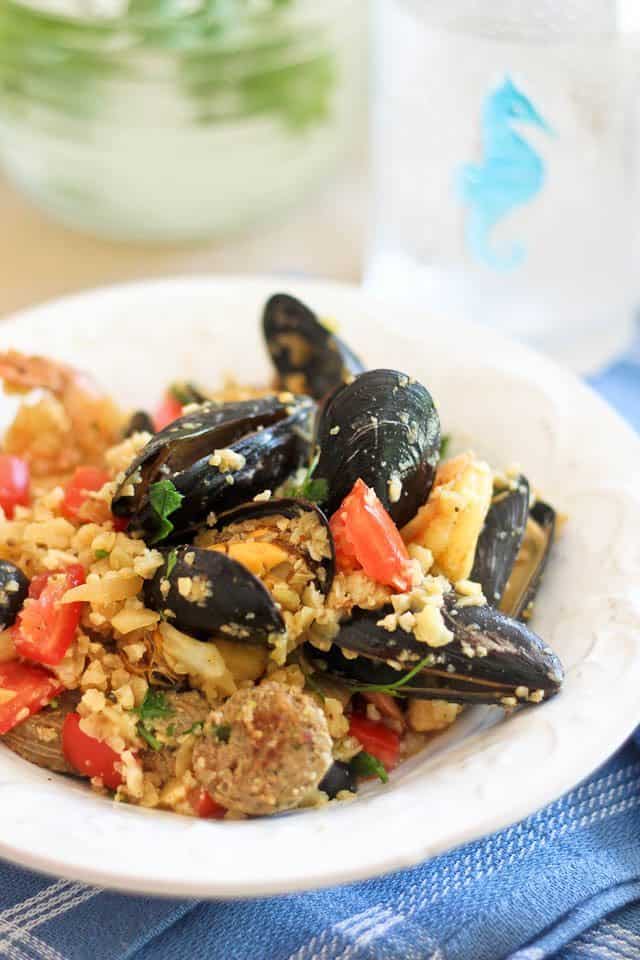 Or, hey, you could also leave the mussels out and use somethin’ else instead.

After all, that IS what paëlla is all about: it’s a free-style combination of meats and seafood, mixed with rice (in our case, cauliflower) and various vegetables.

I think only real key, or common ingredients would be rice, saffron and olive oil. That leaves you with quite a bit of room to play with!

So go ahead and do just that. Go wild. Use any combination of meat and seafood you may like.

I’m thinking leftover pork roast must be grandiose in there.

So go, run with it. Make this recipe your own and impress your guests and family members! 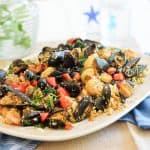 *The mussels will render quite a bit of liquid as they open up, which could make the Paëlla a bit more watery than you would care for. If you want to avoid having all that excess liquid in your paëlla, you could steam the mussels for a minute or two to get them to open up and release their liquid prior to adding them to the dish.
Author: Sonia! The Healthy Foodie 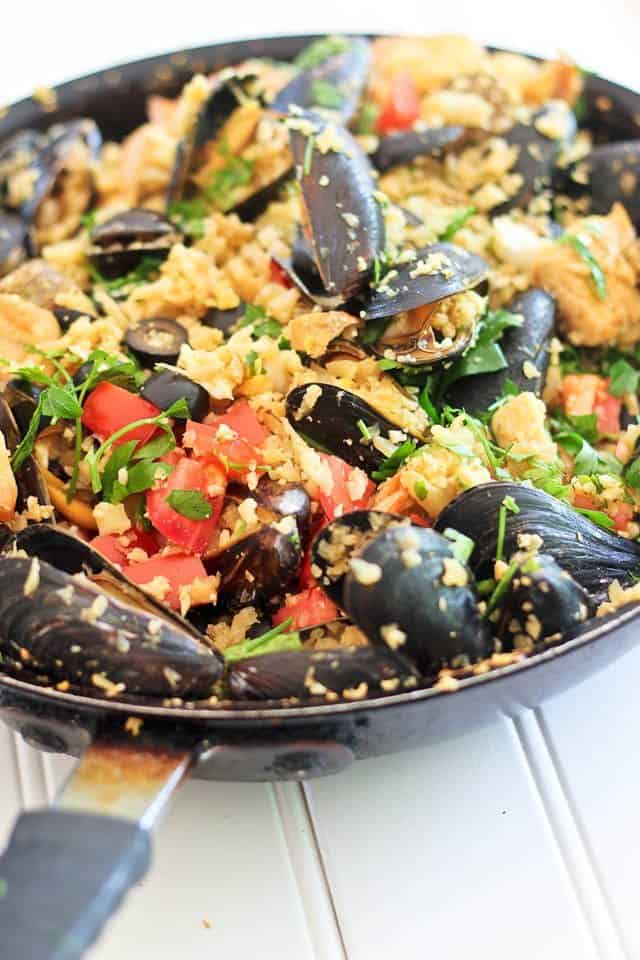 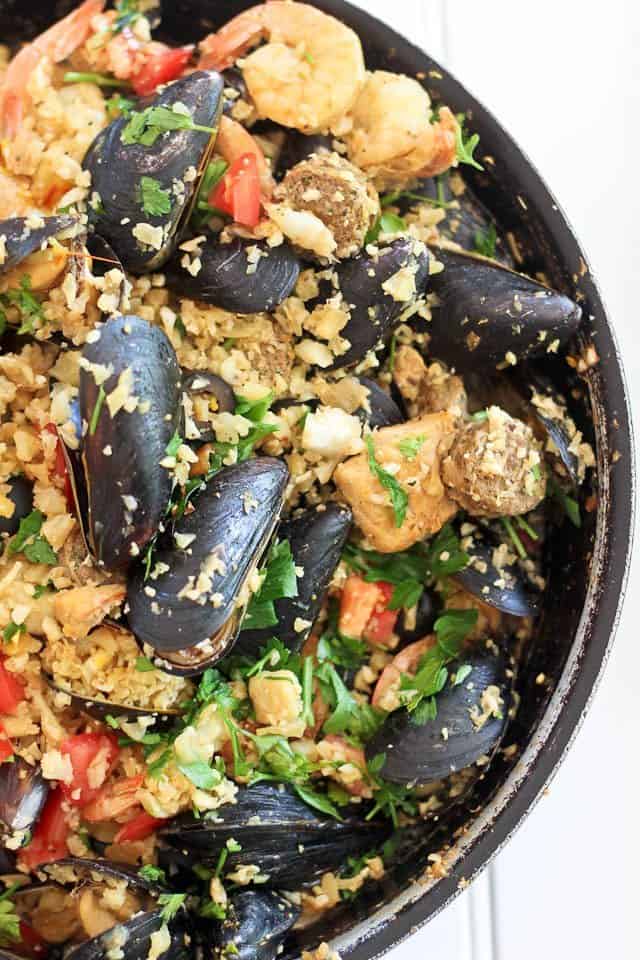 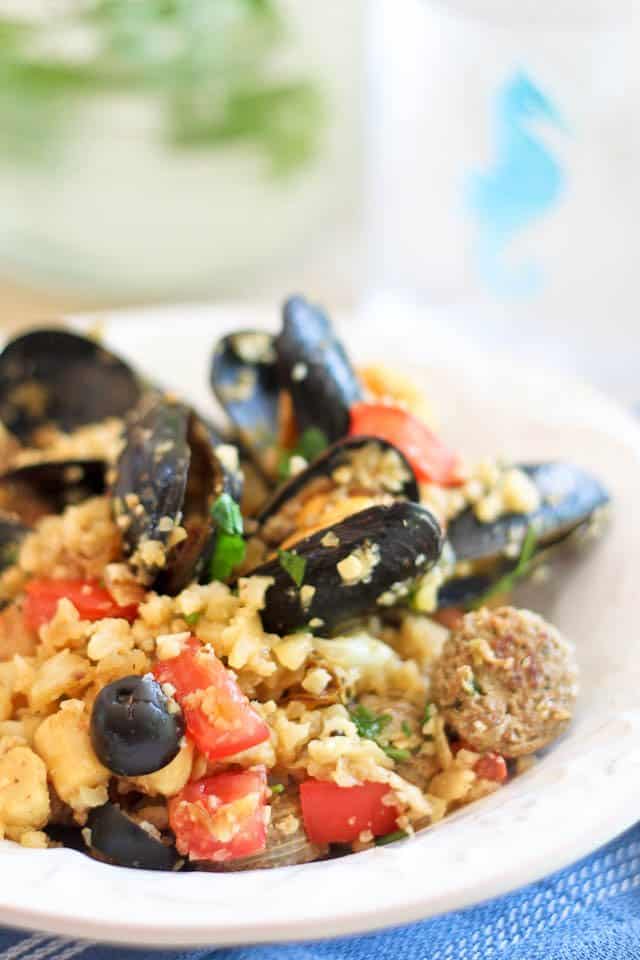