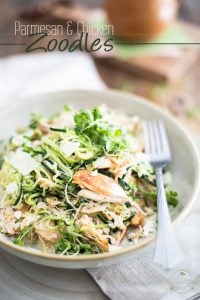 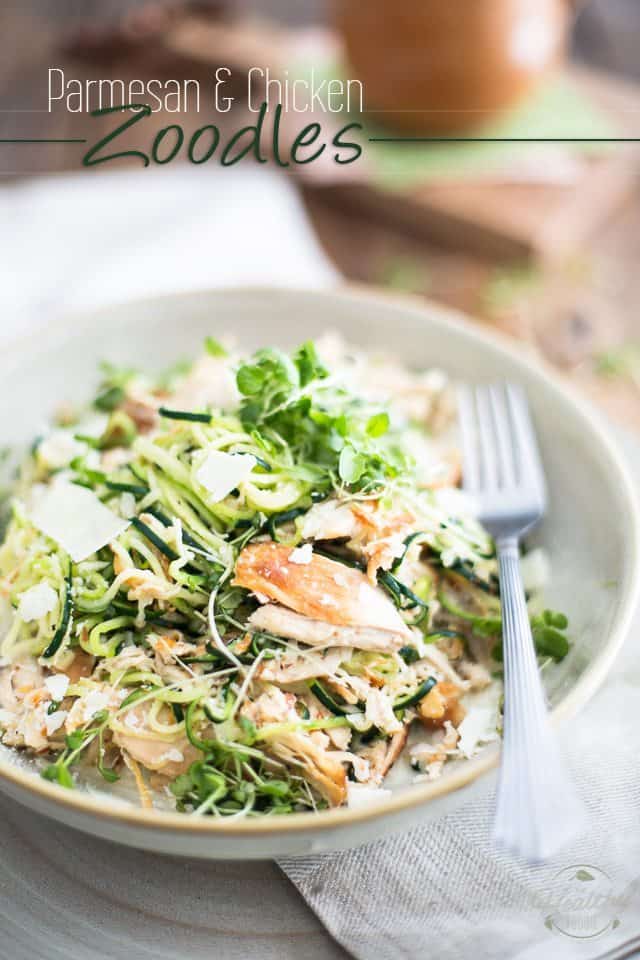 Okay, yes, I’m sorry… here I am giving you yet ANOTHER chicken recipe. Well, like I said the other day, if one is going to roast an 8 pound bird and then eat it all by their lonesome, they have to come up with different ways to enjoy the leftover meat because trust me, it will be aplenty!

Even if the Spinach Clementine Chicken Salad that I’d just come up with was one incredibly easy and tasty way of using some of the said leftovers, I still didn’t feel like eating that same salad for 6 days straight…

Plus, I had 2 humongous zucchinis in the fridge that were desperately asking to be used up. Can you think of a better way of using zucchini than by turning it into some kind of a zoodle dish? I don’t think I can.

Since I’ve been on a pretty intense Parmesan cheese kick lately, the decision to go for a very simple Parmesan and Chicken Zoodles dish came to me very naturally. 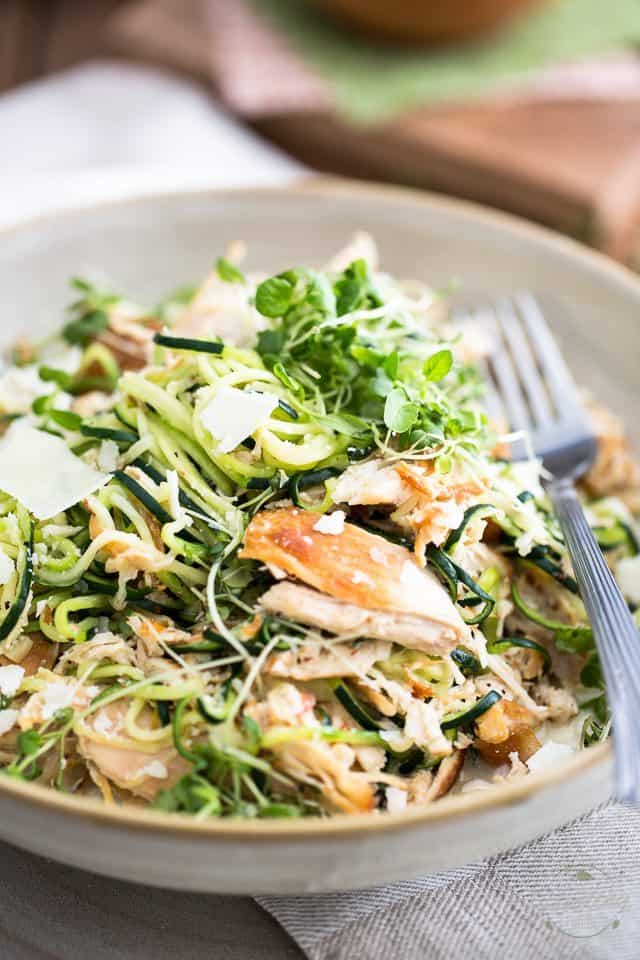 For this particular dish, I decided to drain the water out of the zucchini. Firstly, because I love how doing so makes the zucchini really super crunchy and kinda-sorta-chewy, too. If you’ve tried it before, then you know exactly what I’m talking about. If not, then you definitely have to remedy that.

Secondly, I didn’t want the zucchini to release all of its water straight into the dish: it would’ve instantly turned it into a soup and that is NOT what I was after. Of course, I could’ve thickened up the whole thing by adding a little bit of tapioca starch to it, thus creating some kind of a creamy sauce, but I didn’t really want to do that. Truth is, I didn’t really want any sauce at all.

I was going for fresh and light, almost summery, with just a hint of tangy yogurt to kind of bind the whole dish together. That was a complete success!

The only caveat, if there is one, to giving the zucchini this treatment is that it becomes kinda hard to break up with your teeth, so you want to keep your noodles on the shorter side. I’m not saying to cut them super short, like you would spaghetti for a toddler for instance, but you may not want to keep your strands neverending-long either. Go for an easily-slurpable size and you’ll be just fine. How long is that, you ask? I dunno… I’d say about yay long. Just trim the noodles here and there randomly with a pair of kitchen shears; that should do the trick. 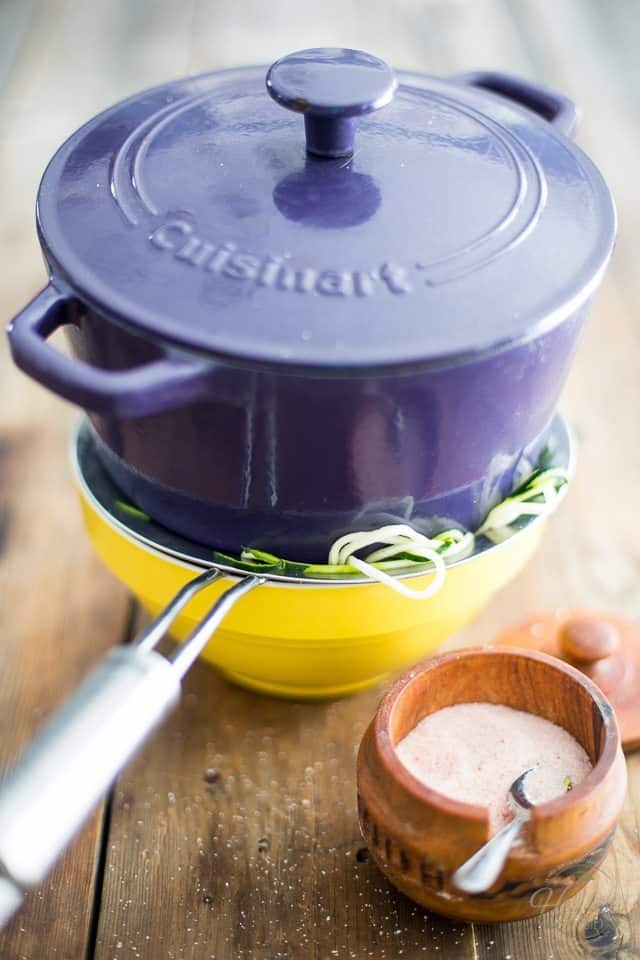 Once your zucchini has been spiralized and that your noodles have been trimmed down to the desired size, sprinkle them generously with salt and place the whole lot in a fine meshed sieve fitted over a bowl, so you can collect the water. We’ll be using some of it later to deglaze the pan, so don’t discard it.

Now place a fairly heavy weight over the zucchini to facilitate and speed up the draining process. You’ll want to let that water drain for about 10 minutes. 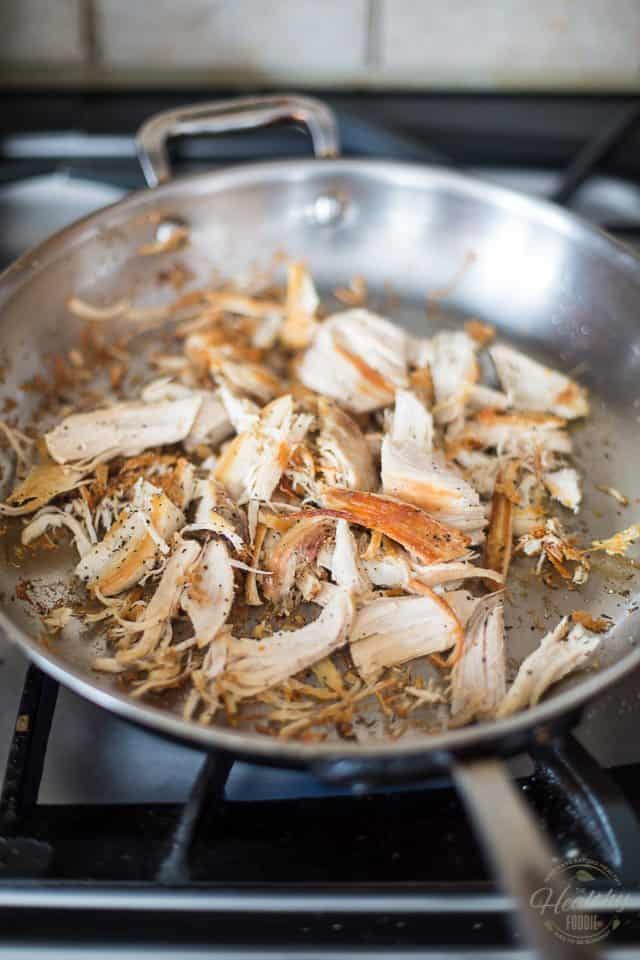 Once that’s done, melt some ghee in a large skillet set over medium-high heat; add the leftover cooked chicken, salt and pepper and cook until the chicken becomes crispy, about 3 to 4 minutes.

Don’t worry if your chicken sticks to the pan a little bit. I actually like it when mine does that: it creates fine little strands of super crispy chicken. If you prefer your chicken not to stick at all, then feel free to use a non-stick pan instead. 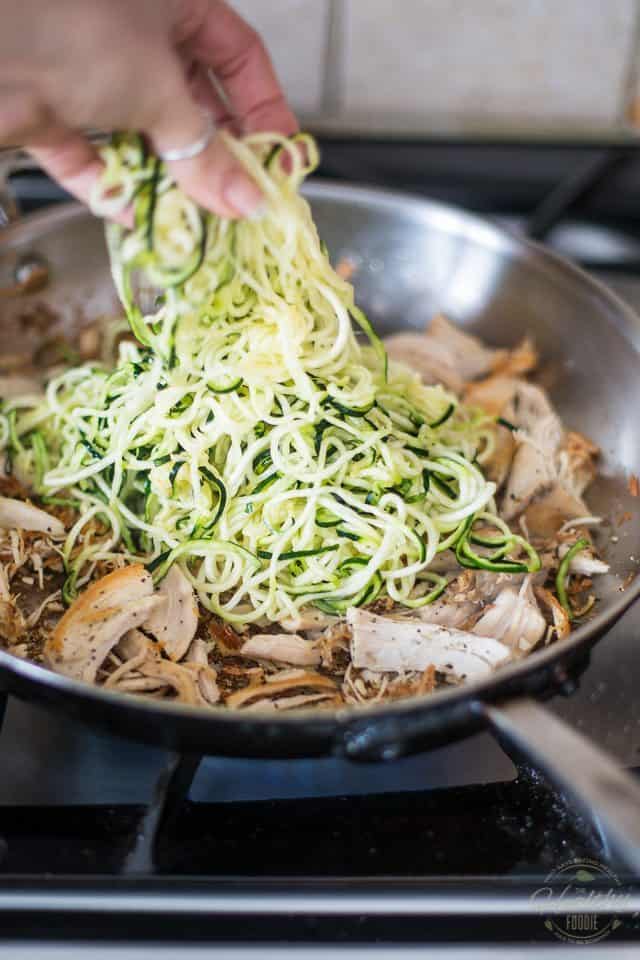 When the chicken is cooked to your liking, throw in some minced garlic, the drained zucchini noodles as well as 2 to 3 tablespoons of the “zucchini water”.

Now make sure you don’t too much of that water, otherwise you’ll end up with a very salty and watery dish. Add just enough to properly “deglaze” the bottom of the pan. 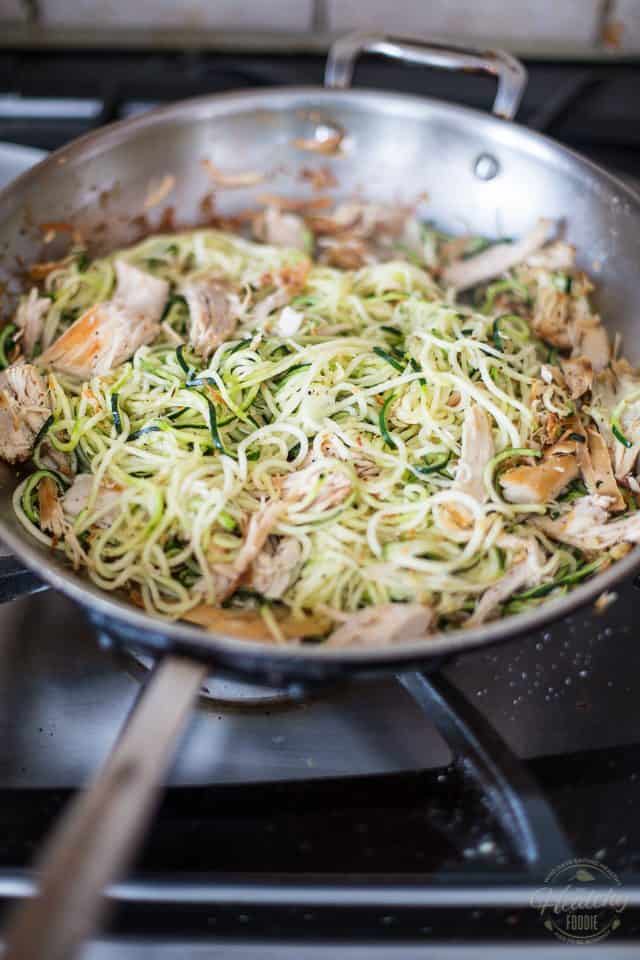 Toss to combine and cook for about 1 minute, until the zucchini noodles are heated all the way through. 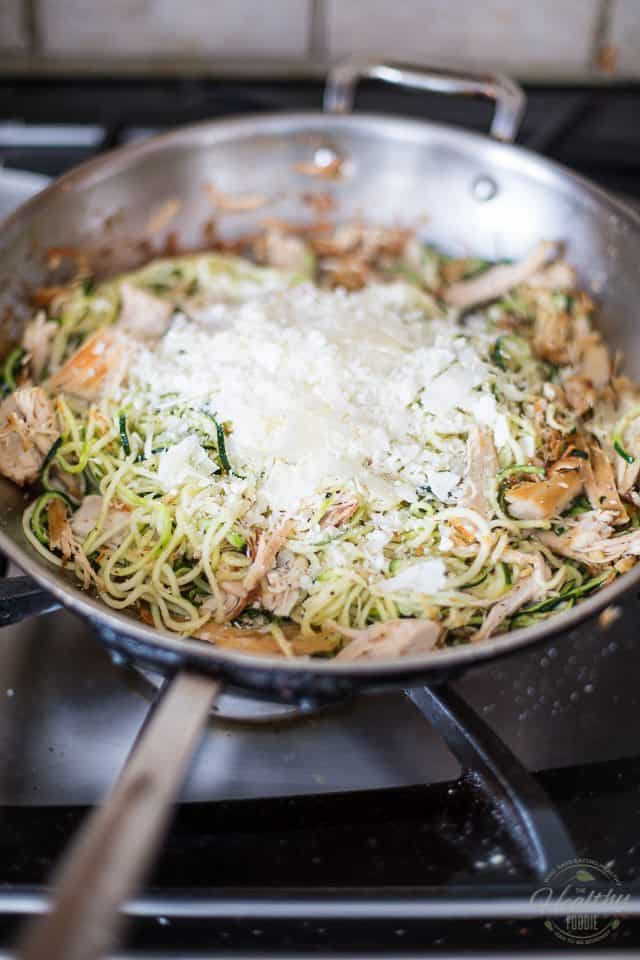 Now kill the heat and add the yogurt and grated Parmesan and toss gently to combine.

Note that it’s very important that you kill the heat before adding the yogurt, as yogurt tends to curdle when cooked. Trust me, you don’t want that. While it may taste just the same, curdled yogurt doesn’t look very appetizing at all.

Plus, you don’t really want the cheese to melt either. You just want it to soften up a bit, that’s it… 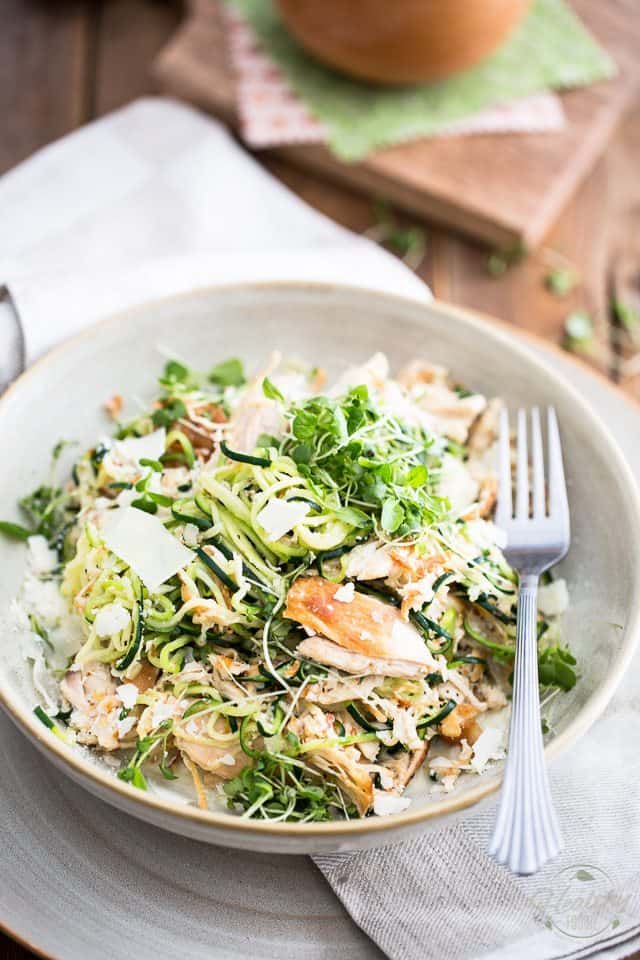 This dish is best served immediately, garnished with a little bit more Parmesan cheese and a handful of micro-greens. 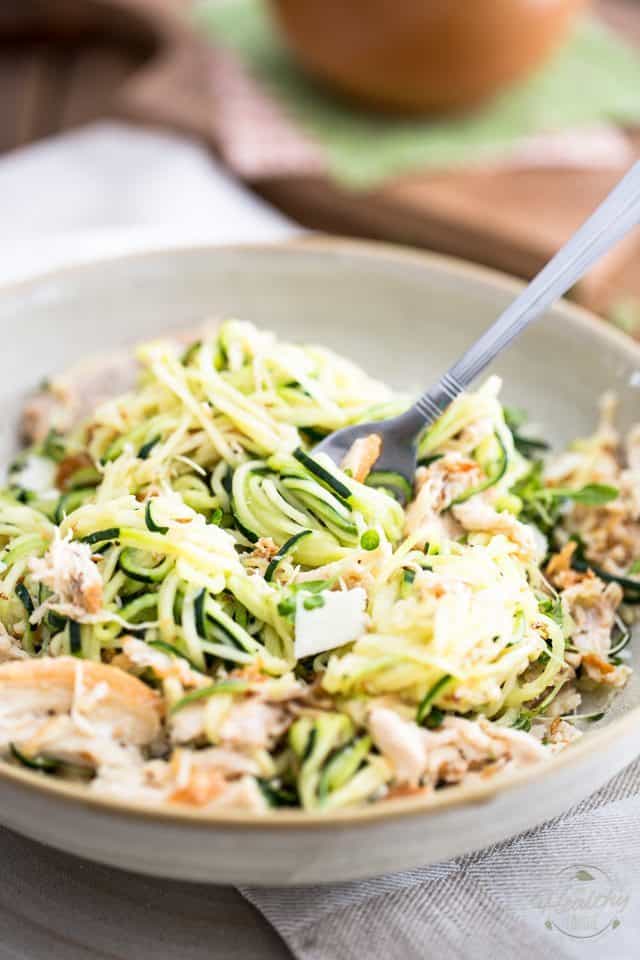 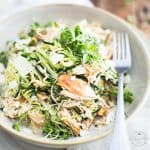 Prep Time: 15 minutes
Cook Time: 5 minutes
Total Time: 20 minutes
Ready in no time, this Parmesan and Chicken Zoodles recipe is as refreshing to the taste buds as it is pleasing to the eyes!
Servings: 2 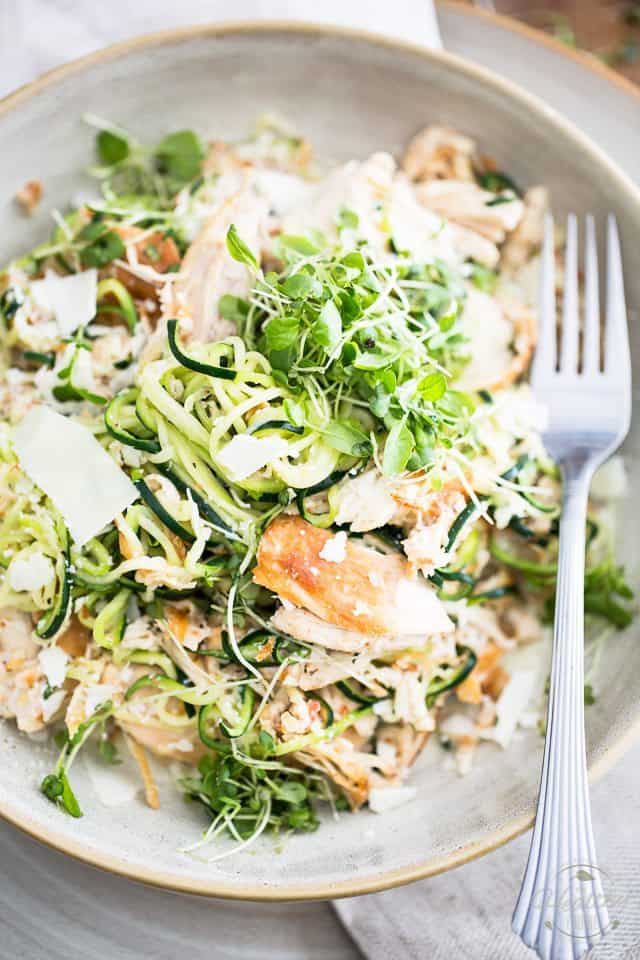 5 Comments on “Parmesan and Chicken Zoodles”