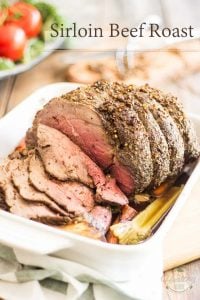 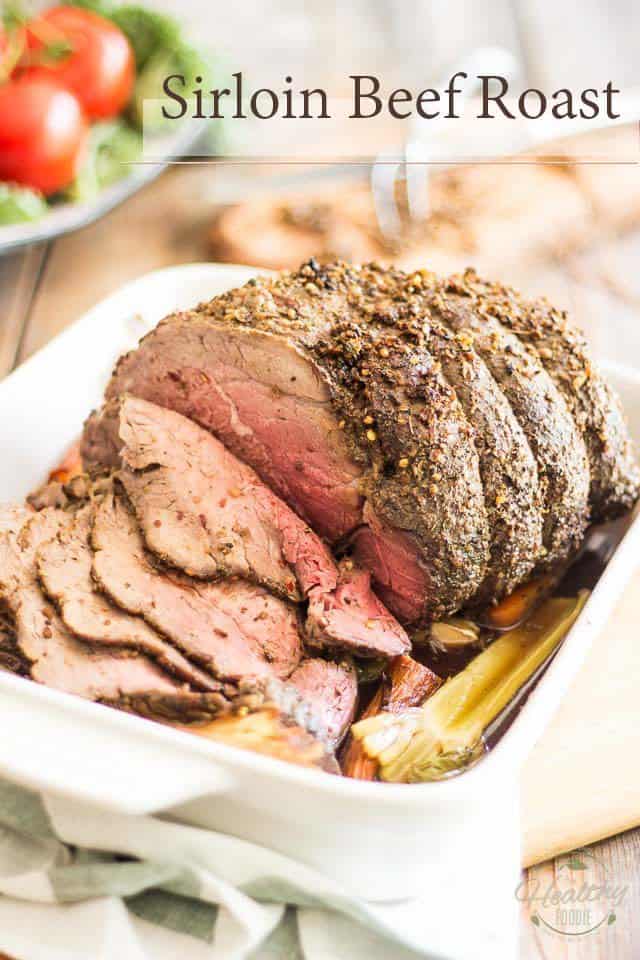 This may come as a complete shock to some of you, but I have to confess that I’m not the most perfect paleo specimen out there. Not even close!

I mean, I try and buy local and in season as often and as much as I can; and, as much as possible, I try and purchase my meat by the carcass, directly from the farmer. However, that isn’t always super convenient and sometimes, well, convenience has to rule some of my decisions.

Moreover, I’ve been trying to stick to leaner meats and cuts of meat lately, in an effort to shed a few pounds of extra fat that I wouldn’t mind leaving behind once and for all, you know. And when purchasing whole carcasses, you don’t get to pick and choose specifically which cuts you want to get.

Now don’t get me wrong, I am fully aware of the fact that fat doesn’t make you fat, but still, fat IS very calorie dense, with 9 calories per gram vs 4 calories for protein and carbs. Go too generously in the fat department and there might not be enough room left in your daily calorie allowance for protein and carbs. And when you’re wanting to eat lots of protein and a fair amount of carbs while keeping your calorie intake in check, well, you gotta be mindful which kinds of meat you consume. 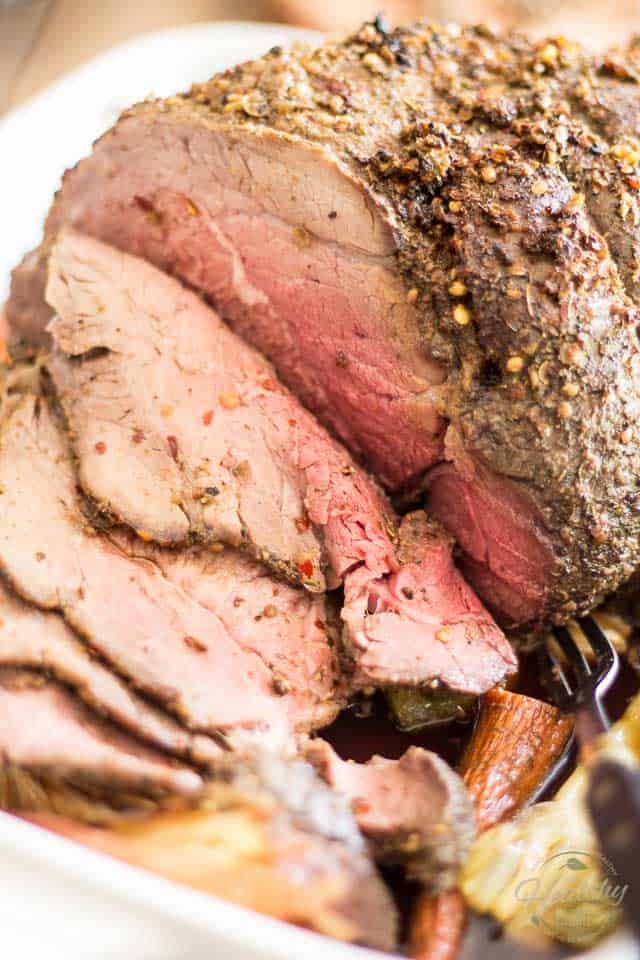 Beef Sirloin is a fairly lean cut to start with and it’s one that allows you to easily trim off all traces of visible fat from it, which will render it even leaner for you. What’s really great about it, though, is that despite being so lean, when cooked right, sirloin remains very moist and is quite a tasty cut of meat.

One of my favorite ways of cooking it is this one: topped with a beautiful crust of herbs and spices and baked in a fairly low temperature oven until it’s interior becomes perfectly pink and juicy.

Not only is such a roast delicious fresh out of the oven, but it’s also fantastic eaten cold the next day, and the day after, and the one after that… I could eat cold roast beef all the time and never get tired of it. Plus, there are so many dishes that you can whip up in a flash with leftover roast beef. It definitely is one of my favorite things to have in the fridge; That’s why I always like to make real LARGE roasts, and I strongly suggest that you do the same.

But hey, if you want to keep things a little bit more modest, simply start with a smaller piece of meat… only the cooking time will be reduced, and you might not need quite all the spices. No biggie, you get to keep the leftovers for another use! 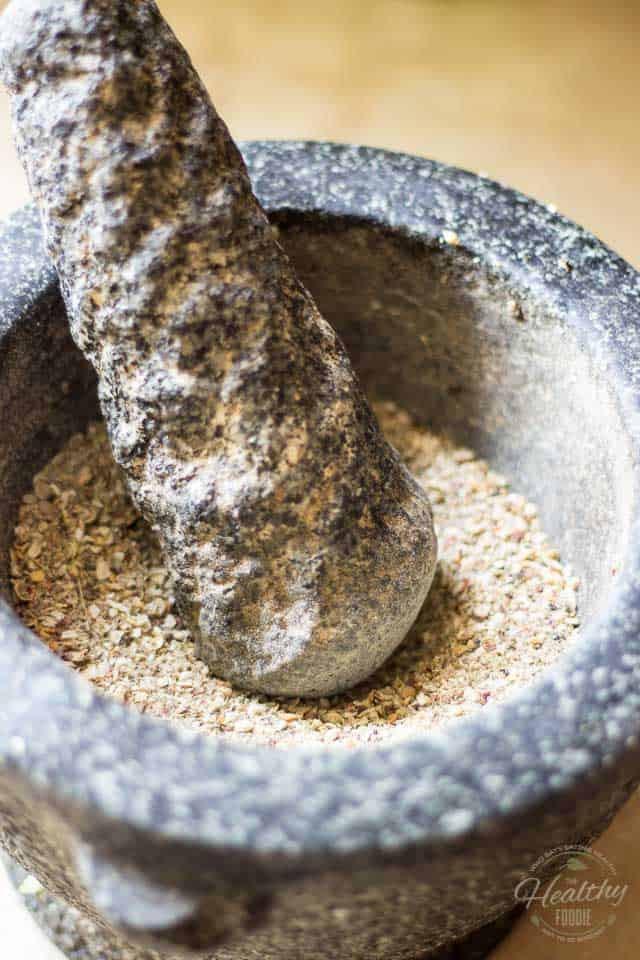 Speaking of the spice mix, this is exactly what you will want to want to start with.

The day before you’re going to be cooking your roast, grind all the spices together in a mortar or in a coffee grinder. If using a coffee grinder, be careful not to get over zealous. You want your spices to remain somewhat coarse, so they create a beautiful crust. 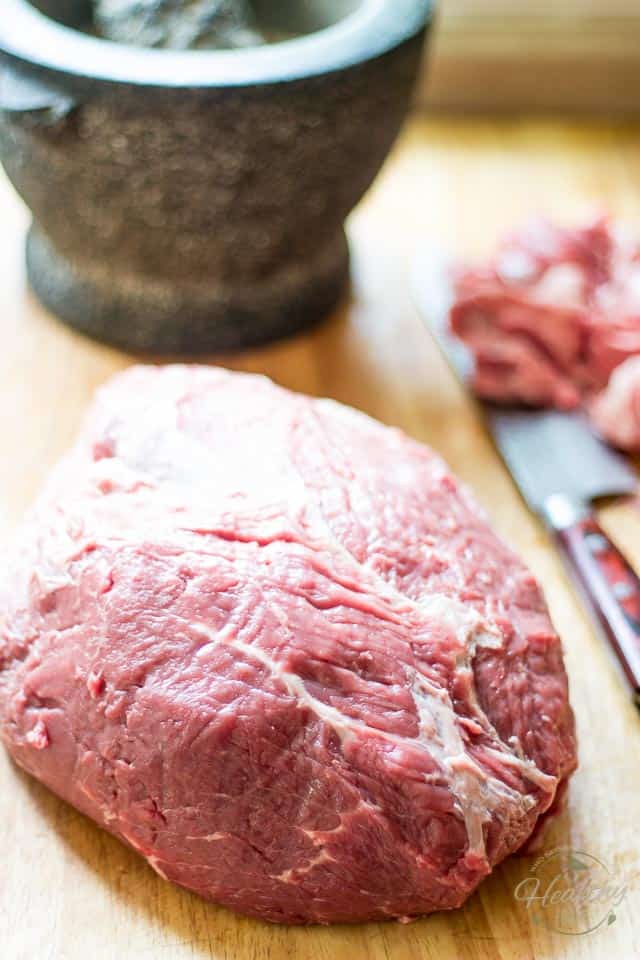 Trim off excess visible fat from the meat. There usually isn’t that much to start with, but still, there may be a few bits and pieces that you can get rid of.

Unless you don’t mind it at all, in which case, you are more than welcome to leave it right where you found it! 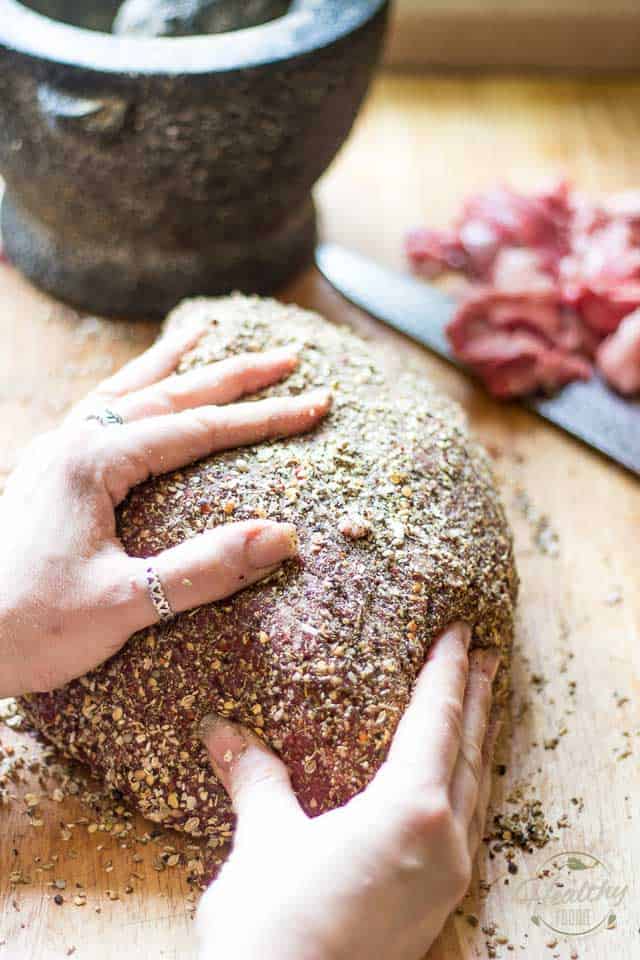 Now rub the spice mix on all surfaces of the roast. Don’t be afraid to lay it on thick, but if you feel you really have too much for the size of your roast, don’t hesitate to keep some for another use.

Once your roast is nicely covered in herbs and spices, wrap it tightly with several layers of plastic film and place it in the refrigerator to rest until the next day. I strongly suggest that you place your roast in a rimmed plate or dish to collect any eventual leakage. 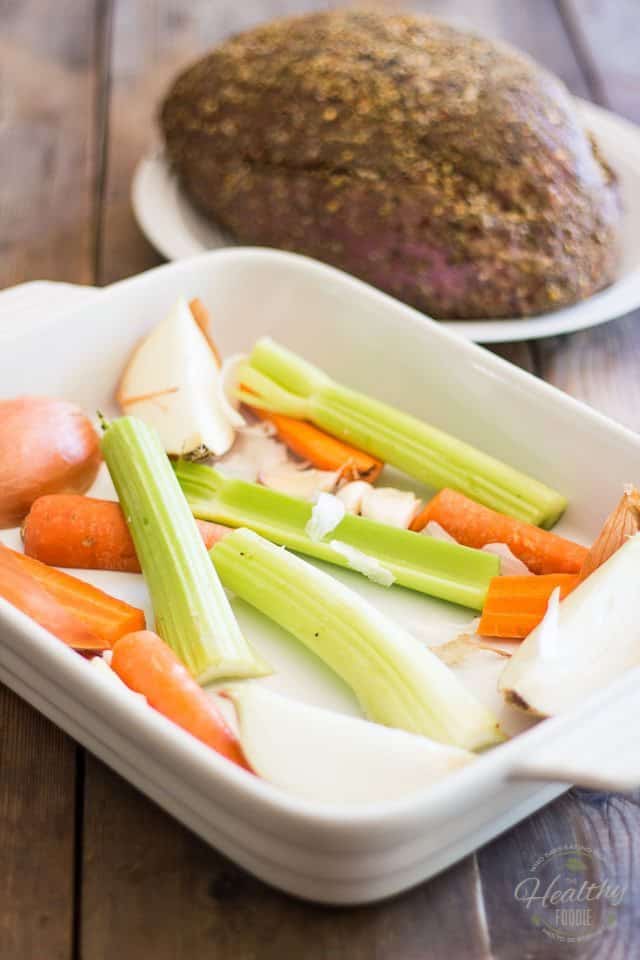 The next day, when you are ready to cook your roast, remove it from the fridge and unwrap it from the plastic wrap. If it isn’t tied up already, tie it up nice and tight with a piece of butcher’s twine.

Now I’d rather not even try and show you how to get this tying thing done. My roast tying skills are pretty much non-existent, if you know what I mean. Chances are, though, your butcher will have done that for you already, so you won’t need to.

Time to cook that roast; preheat your oven to 325°F.

Place an onion, a few celery ribs, pieces of carrot, cloves of garlic and a little bit of water in large baking dish. No need to get fancy about it, either; all we want to create here is a tasty bed for our beef to sit on while it roasts. So don’t even bother peeling the vegetables or anything: just cut them or break them into large pieces, smash the garlic with the side of a knife and dump everything in the baking dish. 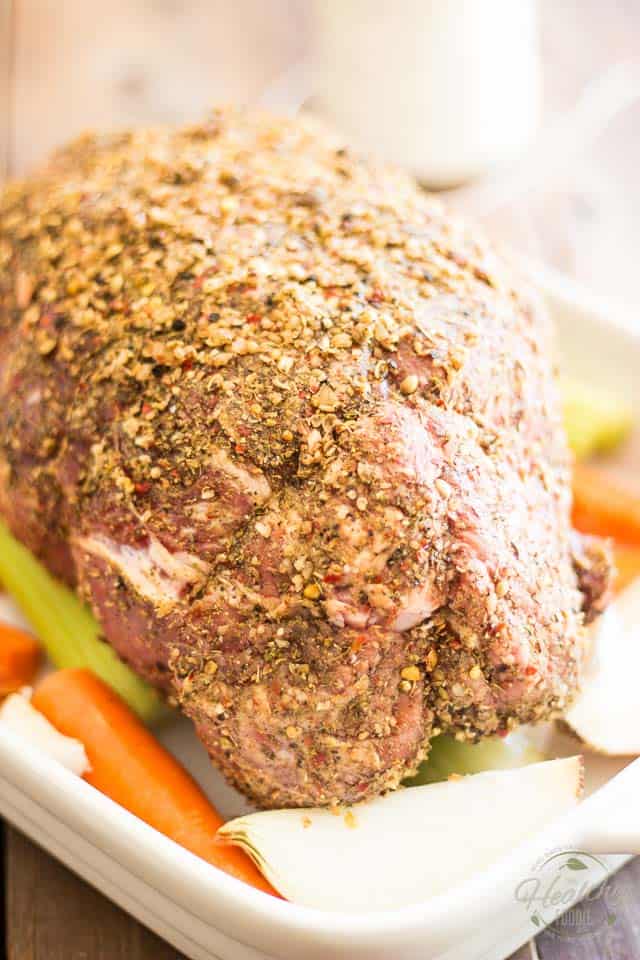 Now put your roast right on top of this bed of veggies; this will allow air to circulate all around your roast and will greatly contribute in keeping it moist while also infusing some beautiful flavors into your meat.

Oh! If roasting meat intimidates the heck out of you and you’re thinking there’s no way you can ever get it right, that you’ll invariably either cook your meat too much or not remotely enough, fear not;  I used to be the exact same. There is a very simple solution to that problem: you only need to invest a handful of dollars in a digital meat thermometer. Ideally, you want to get one that has a probe that you can insert into your roast and that lets you monitor the temperature of your meat without even opening the oven door.

This simple precaution will insure perfect results, every single time. 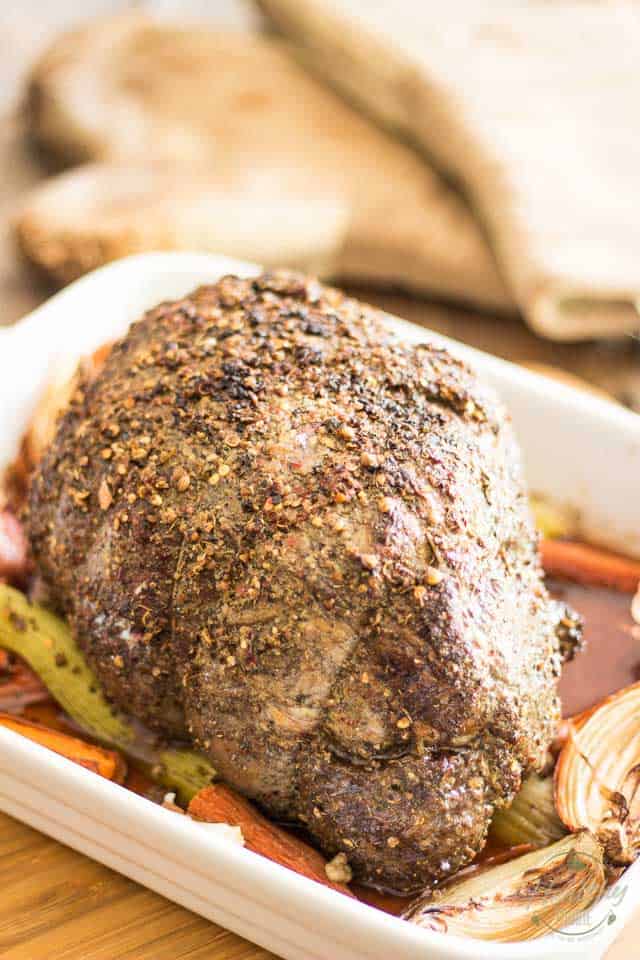 Bake the roast uncovered for about 15 minutes per pound, or until a meat thermometer inserted in the thickest part of the roast reads between 115°F to 125°F, depending on desired final doneness.

At this point, you want to turn your oven off and lightly tent your roast with aluminum foil; leave it in the oven for another 20 to 40 minutes, or until that meat thermometer reads 130°F for rare, 145°F for medium-rare, 160°F for medium and 170°F for well done (although I really do not recommend that you go past medium-rare, because that would make your meat really tough and even kind of leathery…)

Take the roast out of the oven and allow it to rest for an additional 20 minutes, still lightly tented. This will allow the beef to settle and reabsorb its juices, leaving you with a tasty, fork tender and juicy piece of meat.

Finally, transfer the roast to a cutting board, remove the twine, carve, serve, and enjoy! 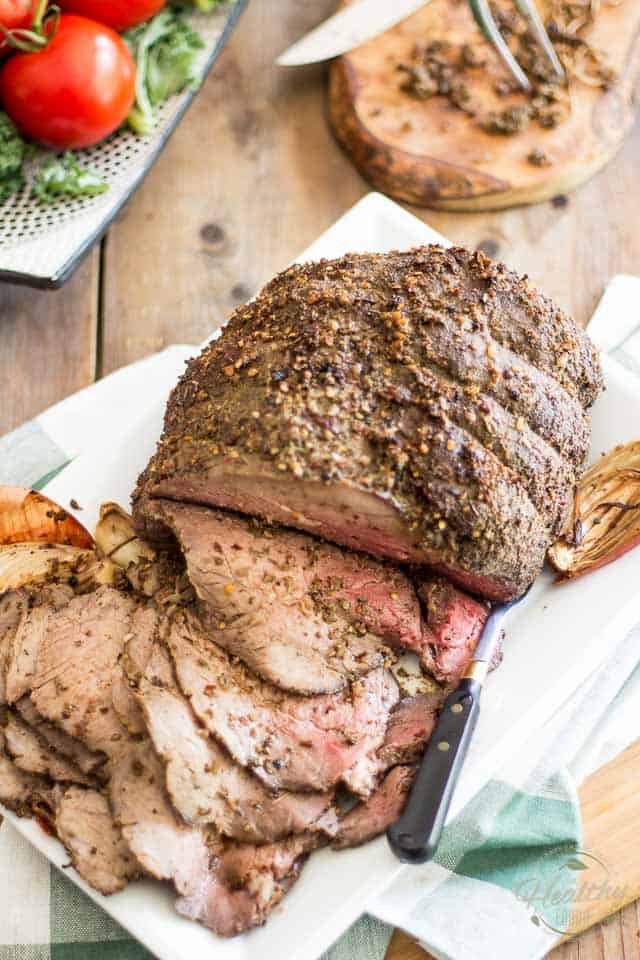 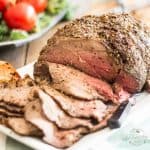 For the spice mix

*My particular roast weighed 6.5 pounds and cooked for 1 hour and 40 minutes, rested for 20 minutes in the oven followed by another 20 on the counter. Its final internal temperature was 132°F 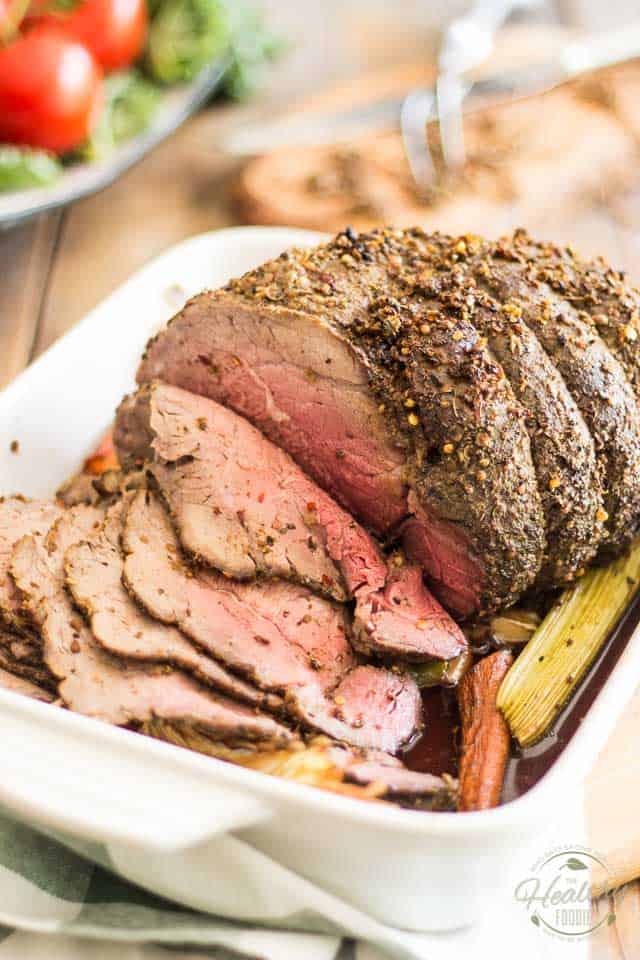