Pork Shank and Meatball Stew – A Christmas Tradition made Paleo 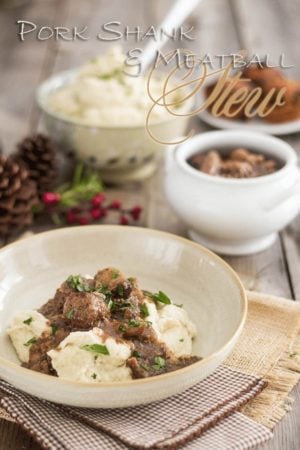 Christmas tradition is slowly starting to go down the drain in this household.

No, sorry, scratch that. I refuse to call it that. “Down the drain” has way too much of a negative connotation to it and Christmas should be about nothing but happiness and positivism…

So let me rephrase that: traditions in this household have been shifting and evolving these past few years, adapting to our ever constantly changing reality. 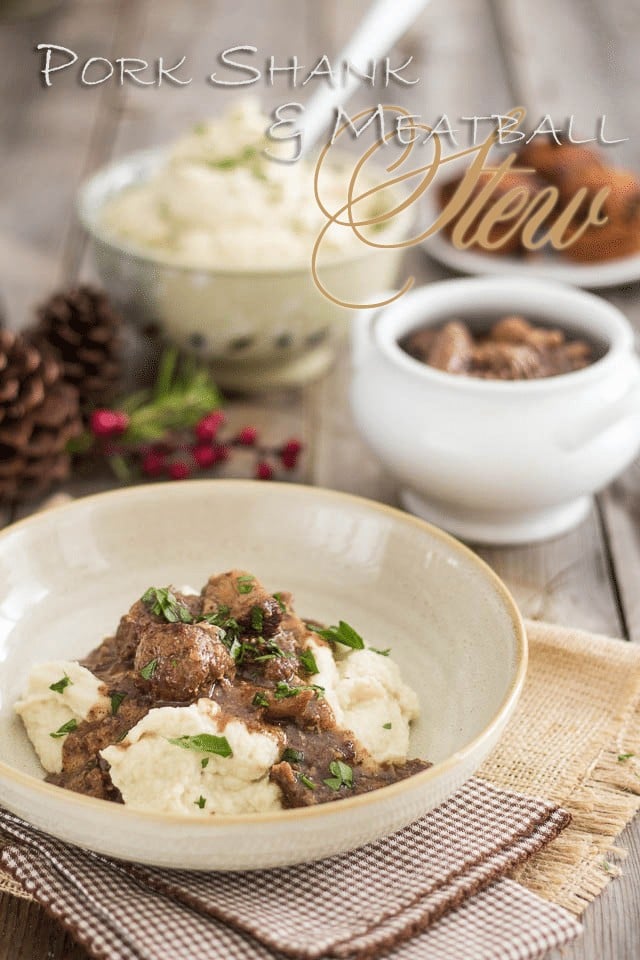 The kids simply aren’t kids anymore, they have a life of their own now, they have jobs and spouses, so we need to plan around work schedules and visits to the step families.
So far, we’ve been lucky and always managed to celebrate our traditional and absolutely sacred Christmas Eve together as a family.

Sure, we’ve had to make a few adjustments here and there, but to this day, our precious family night reunion has remained fairly undisturbed. 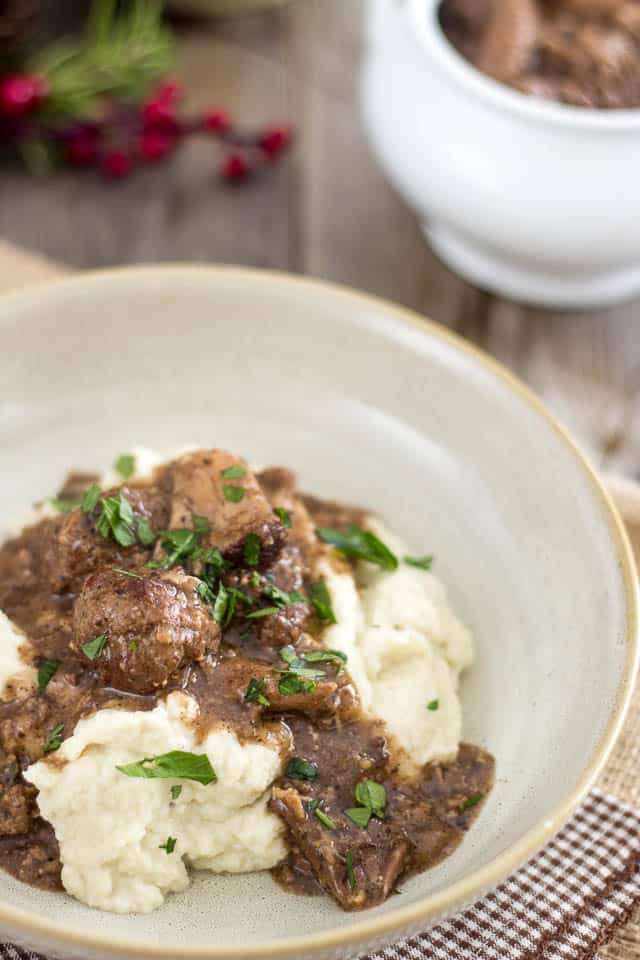 Then, there’s the case of my new health “limitations”. Our good ole menu just doesn’t cut it for me anymore.

Still, the food that makes it to our table seems to be one of those revered traditions that simply cannot be touched. Year after year after year, there are certain dishes that just HAVE to be on the menu. As in, Christmas simply wouldn’t be Christmas without them.

This Pork Shank and Meatballs Stew would be one of them. 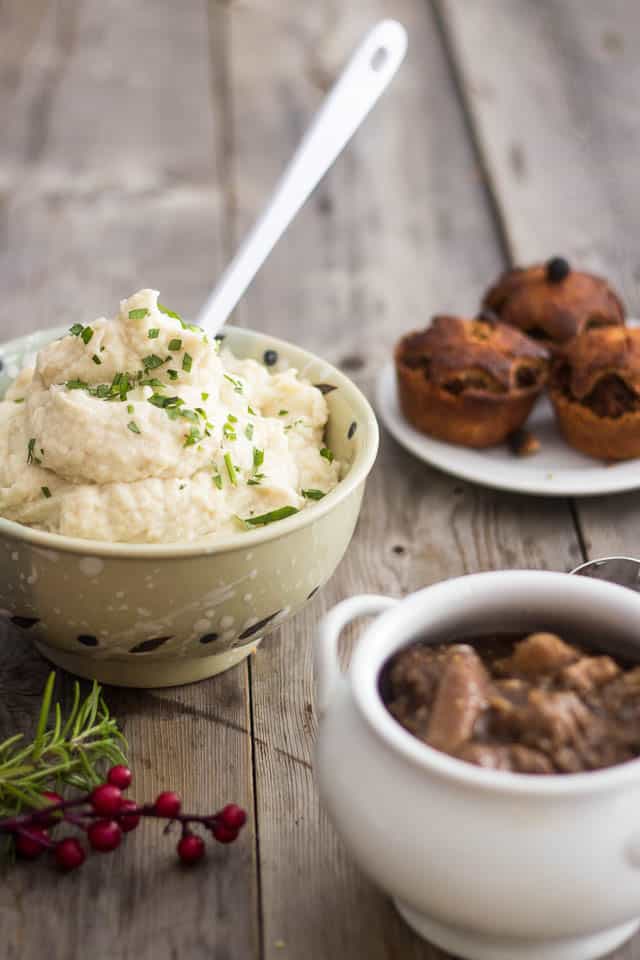 Ever since I can remember, this has been a part of our Christmas menu. My parents used to make this when I was but a little kid. This was their contribution to the extended family reunion, so they always made a HUGE batch. Much bigger than the one I now make. Probably twice as big. Or maybe it’s that I was twice as little, so it only looked like that much more!

I remember staying up very late at night, waiting for it to be done and ready to sample, at last.

Of course, I helped. How else was I going to learn how to make my own? 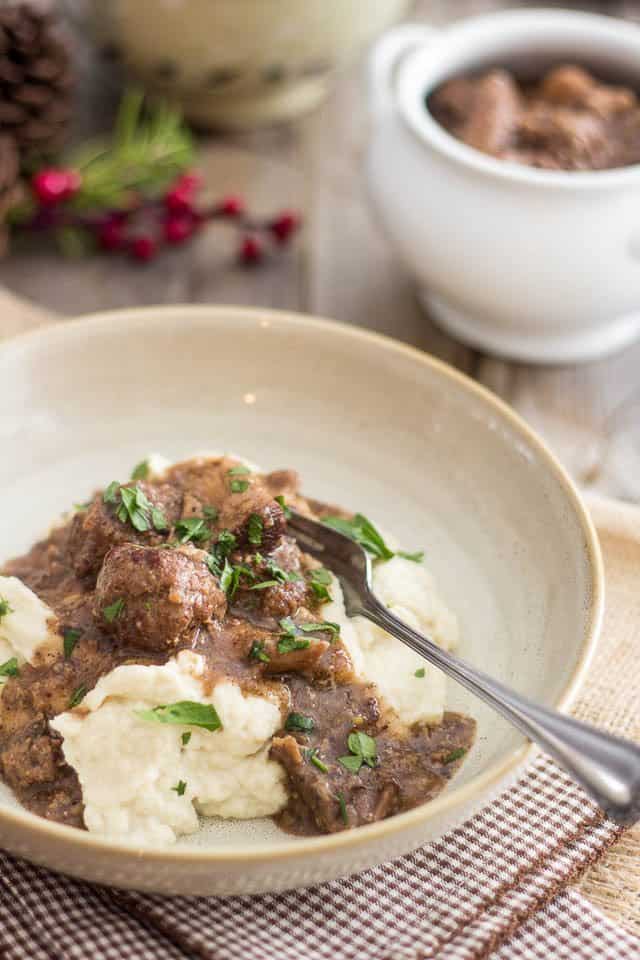 And that, I did. I don’t think I ever skipped a year making this.

Of course, there have been many variations over the years, in an effort to make it healthier. Last year I even made an all turkey version, which was incredibly good and surprisingly true to the real thing, despite containing no pork at all!

This year, however, I decided to go back to my beloved pork, but wanted to stay within the guidelines of the Paleo lifestyle, so I had to eliminate all traces of grains… You might think that it has to be quite easy to remove grains from meatballs and pork shanks, but really, the challenge in keeping the integrity of this dish was in removing the crusted bread soaked in buttermilk which made the meatballs so moist and tender, as well as the toasted flour that made the sauce so thick and gave it its signature taste.

Well, I think that I really nailed it. To the absolute perfection. Visually, it looks exactly the same and the sauce is nice and thick just like it should be. The taste is absolutely brilliant, perfect, exactly like, if not better than the real thing. And the meatballs are melt-in-your-mouth juicy and tender.

I think I’ve got me a keeper here. A new “official” traditional Christmas Meatball Stew recipe, so to speak. 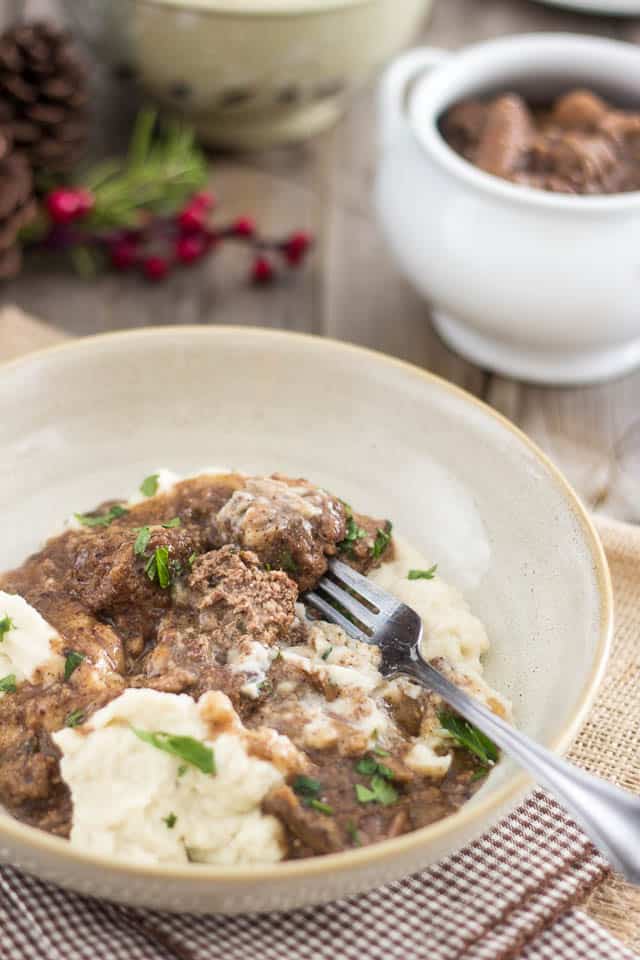 Oh! I did do another change, too! That one was so subtle that it could probably almost go completely unnoticed: I swapped the traditional sacrosanct mashed potatoes for a more nutritious Creamy Garlic Cauliflower Mash.

Goes perfectly well with the stew, if you ask me. And honestly? I think I personally prefer it to potatoes.

Cauliflower is so much lighter and fluffier! I’d even say tastier, too. And it goes amazingly well with the stew…

Now that can’t be a bad thing, can it? 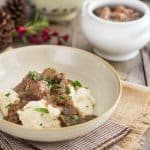 Prep Time: 1 hour
Cook Time: 5 hours
Total Time: 6 hours
This Pork Shank and Meatball Stew is the very definition of what Christmas should smell and taste like. Just one bite and you will be sold, too!
Servings: 24