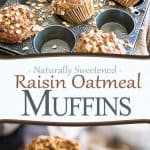 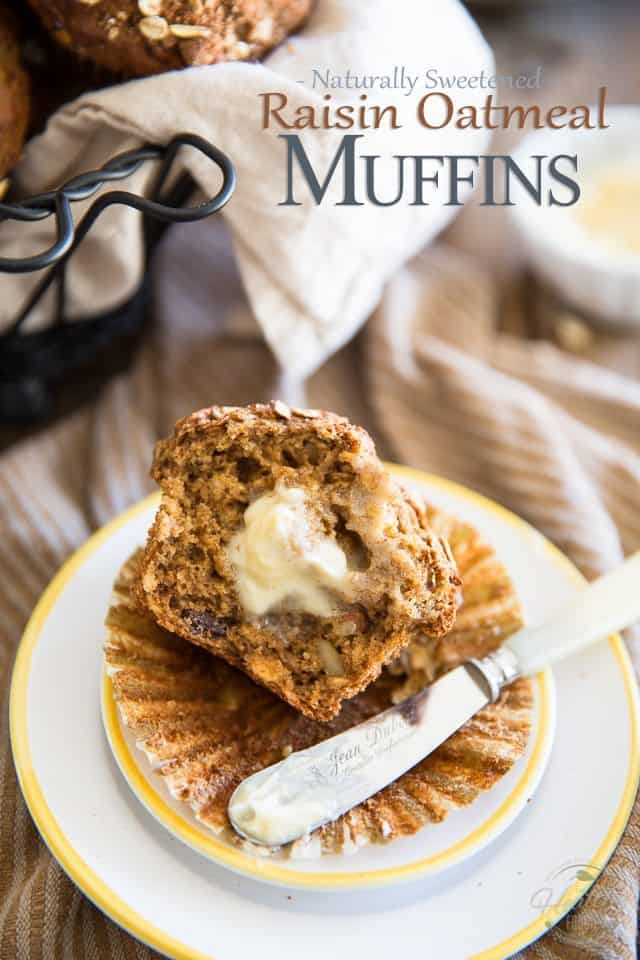 You guys, I’m so crazy excited!!! Firstly, because I finally got my hands on some AWESOME vintage muffin pans (I’d been dreaming about getting some for years!) but also too, because I feel like I’ve just created the ultimate, no, make that the PERFECT oatmeal muffin recipe.

Of course, I don’t expect you to just take my word for it and drop everything you’re doing to run to the kitchen and whip up a batch right this instant. Allow me, if you please, to elaborate on these very serious allegations…

You know how, when you buy muffins at the store or bakery shop, they’re always super big and have beautiful, perfectly mushroom-shaped tops? As in yummy, delicious tops that get super crispy, especially around the edges where the batter meets up with the pan as it bakes and bursts out of its confining little paper chamber?

Well, I’ve been trying to replicate that at home for years, to no avail. Not that I’m a TRUE muffin top kinda girl, because in fact, I never quite could decide which part of a muffin I preferred most: the deliciously crunchy top or the perfectly moist bottom. Truth is, I think I like both parts equally, key word being both here. I like actually HAVING both parts to my muffins.

But up until now, when I made muffins at home, no matter how good they were, they only had one part to them: a bottom with a bit of a crispy layer on it. 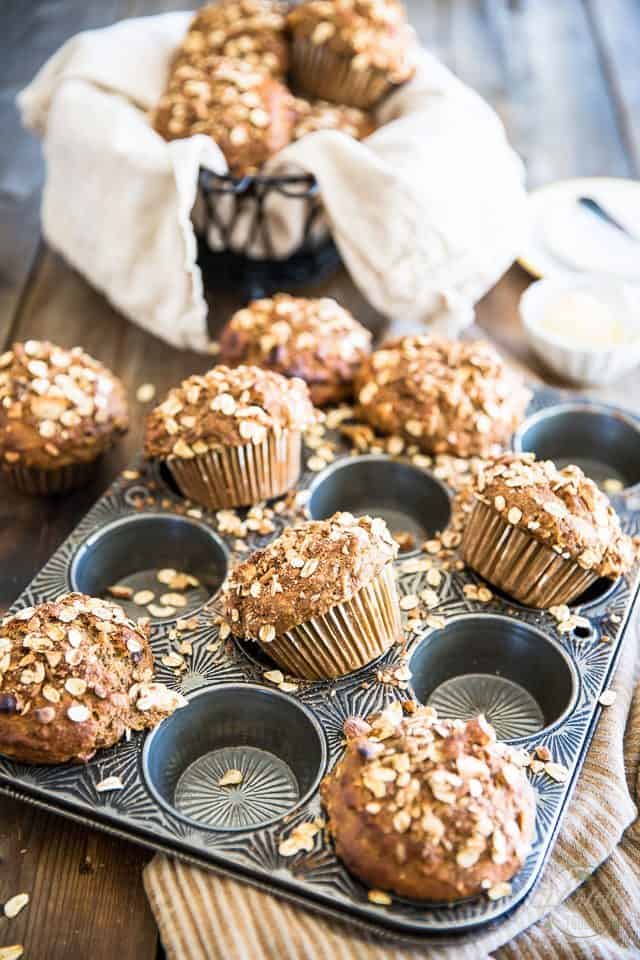 When I was in school, I learned that in order to make your muffin tops really explode and get that nice, sought-out mushroom shape, you had to start baking them at a very high temperature, to shock them out of their “seat” with a great big burst of heat, and then lower the heat to finish cooking the inside. That much made sense, but then again, no matter how hot your oven is, one simply can’t get the batter to triple in volume on account of heat alone.

So I started researching the subject in hopes to find out exactly how to create the perfect muffin, complete with beautiful mushroom tops, at home.

My research quickly taught me that one simple trick: you only need to use a batter that”s firm enough to hold its shape and then totally OVERFILL the paper cups. In other words, you need to give tops to your muffins BEFORE they even get to hit the oven.

BRILLIANT! Why had I never thought of that? 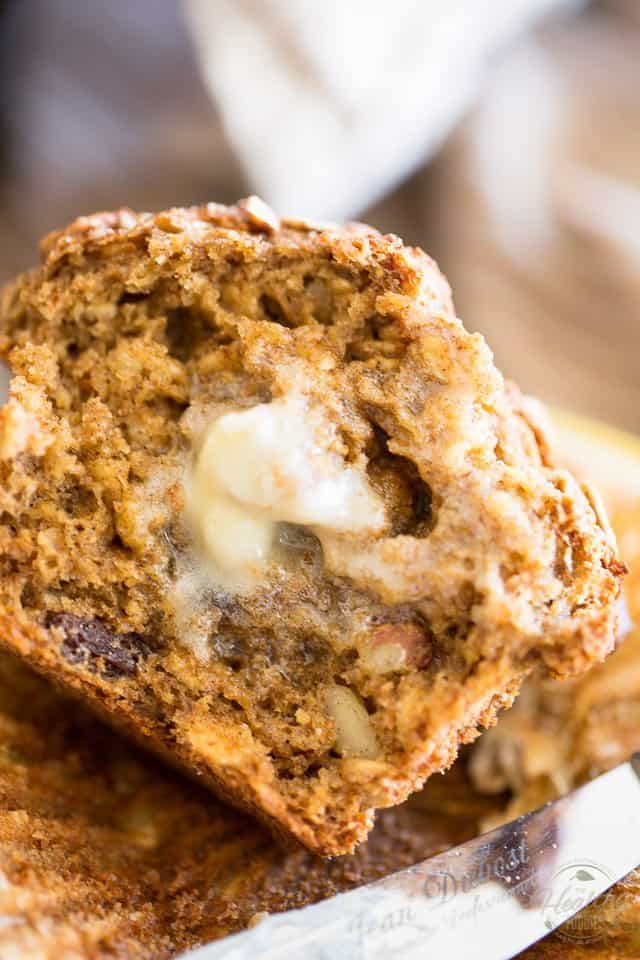 Well, I’m happy to report that I totally nailed it with my very first try. Beginner’s luck? Perhaps! One thing I can tell you for certain though is that I’m not done experimenting and now want to create all kinds of beautiful, healthy mushroom shaped muffins… as soon as I can get my pans back, that is!

Indeed, My Evil Twin‘s requested to use the new pans, too, claiming that it was her who (apparently) actually found them. Hmpft, okay, whatever! I’ll let her play with them, too, even though I get the feeling that what she has in mind isn’t exactly of the healthy kind. I’m guessing that she is more of the triple chocolate nutella extravaganza kind. Oh well, I’ll get out of the house on the days that she gets to experiment!

As for me, I’m just happy that I can finally get the best of both worlds at home, i.e. tops AND bottoms, in a muffin that’s much healthier than any of which I could buy at the store… 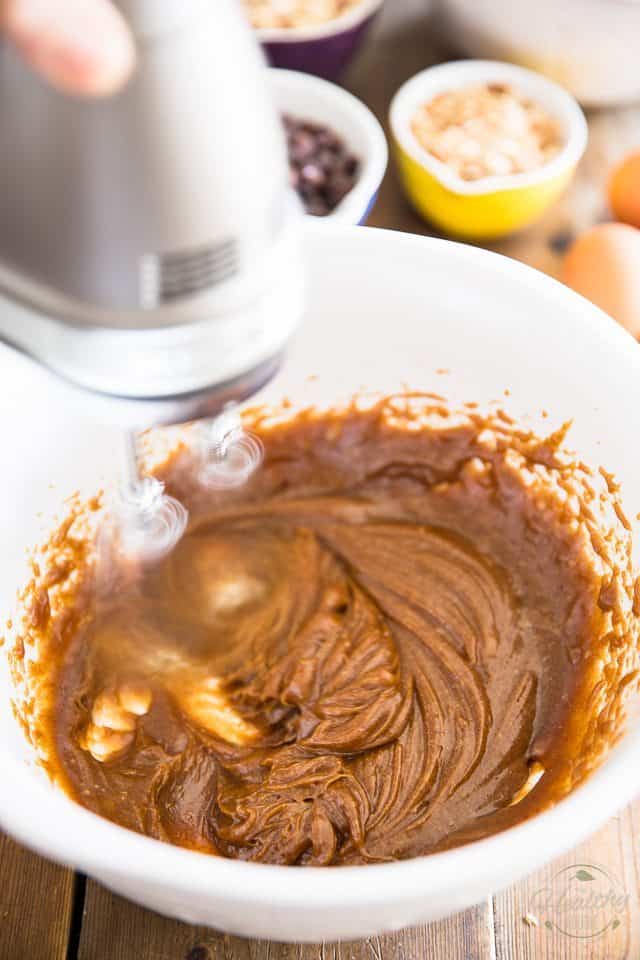 As always when baking, I like to start with a little bit of mise-en-place. First, preheat the oven to 400°F and line a 12 cup muffin pan with paper liners.

Next, in a separate large mixing bowl, combine the date paste, honey and avocado oil and beat on high speed with an electric mixer until thoroughly combined and slightly lighter in color, about 2 minutes 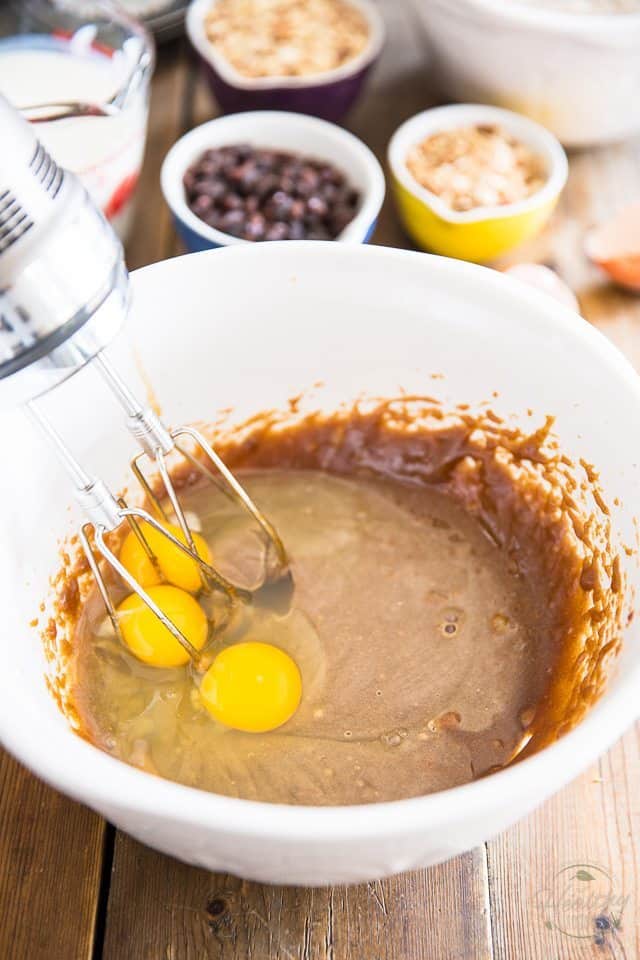 Now add the eggs. As you can see, you can add them all at once, no need to get fancy about it! 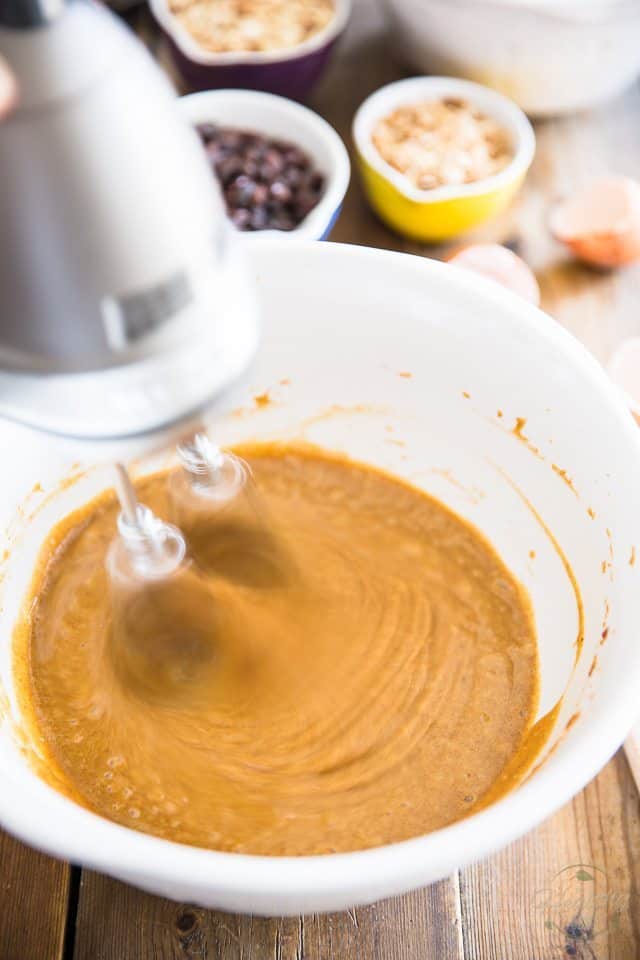 Resume beating for about 1 minute, until very well combined. 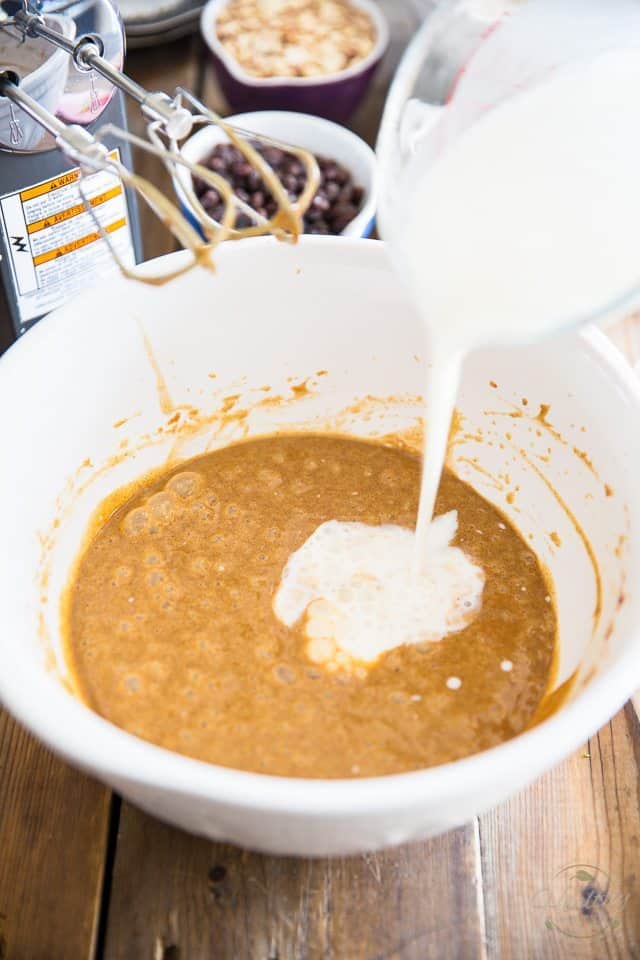 Next, add the buttermilk… 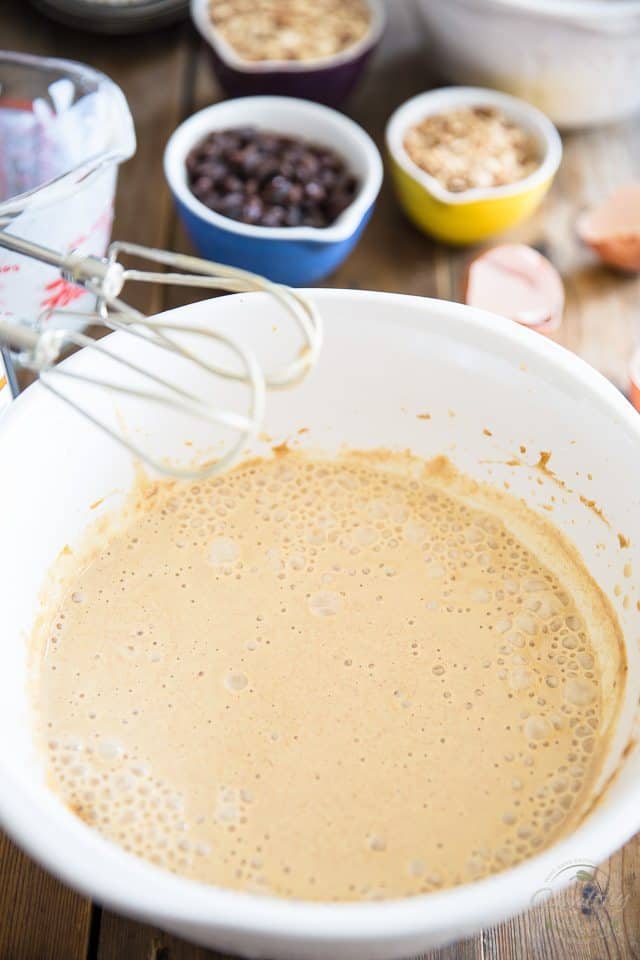 … and resume beating once again on medium speed until fully incorporated.

It might be a good idea to scrape the sides once or twice, just to make sure that you have every last bit mixed in there. 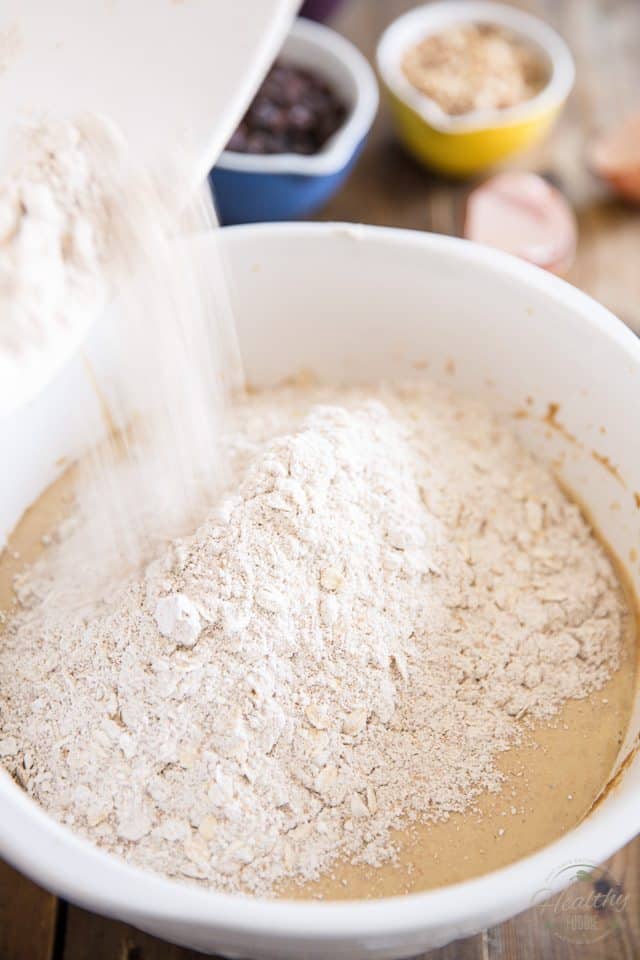 Time to throw in the dry ingredients, the very ones that you’ve taken the time to combine right before you started. You did that, didn’t you?

Good! Throw them right in! 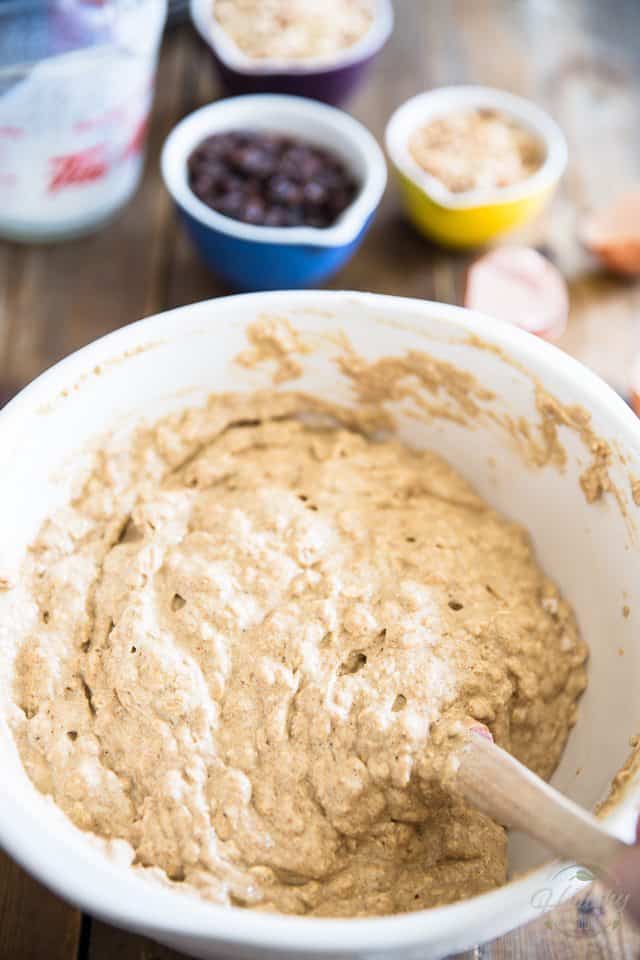 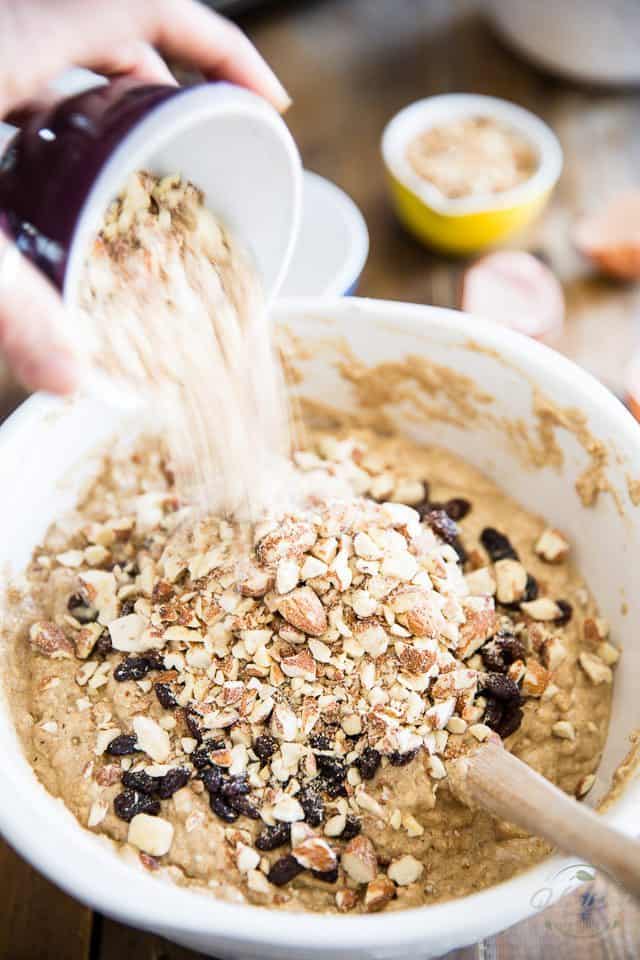 Finally, delicately fold in the raisins and chopped almonds. 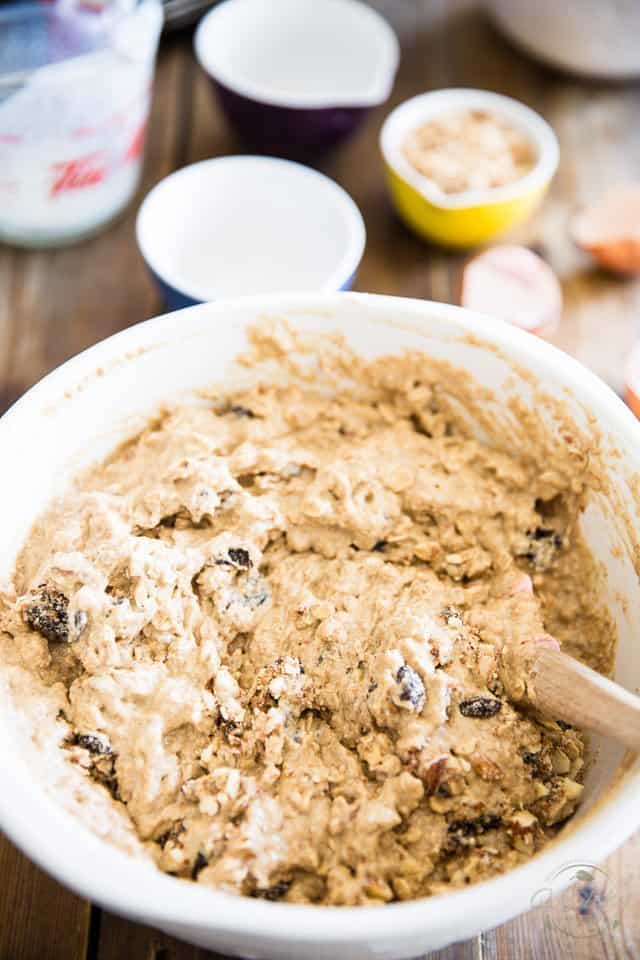 Stir until the goods are just incorporated, no more. 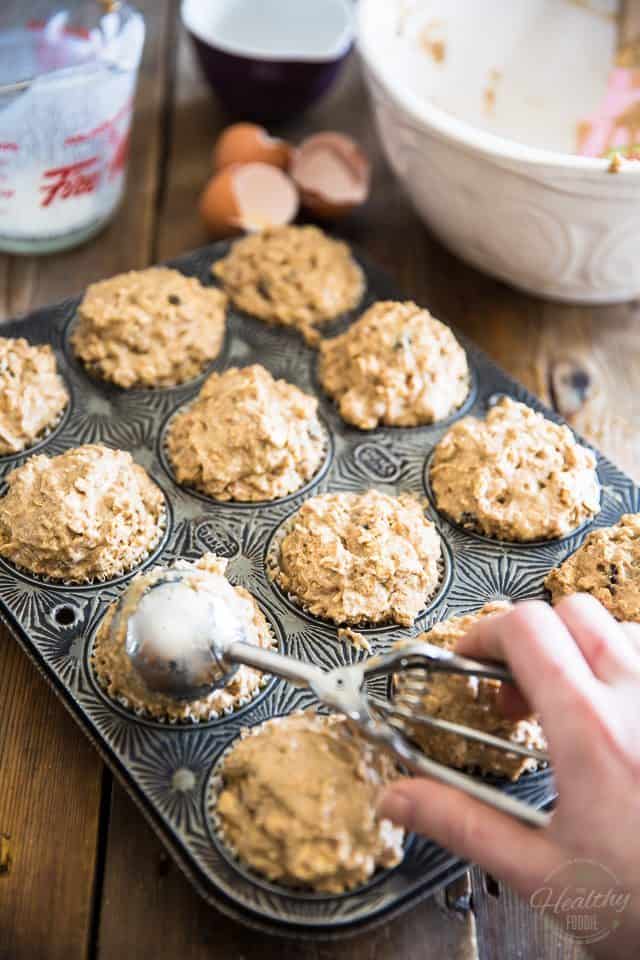 And now, the moment of truth!

Divide the batter between 12 large muffin cups. Yes, that’s 12. You’ll probably think that it’ll never work, that you have WAY too much, but trust… The batter will go over the paper cup, it’s perfectly normal. What you want to do at this point is try to shape the tops into nice rounded domes. A large spring-loaded ice cream scoop works particularly well for this task, so I strongly recommend that you use one.

Also, if you were like, really weird or something, and didn’t care for the extra large, bakery style muffins and preferred to stick with a more conventional homemade, snackable size muffin, you could very well divide the batter into 18 to 24 smaller muffins, instead. Of course, you’d then need to adjust cooking time accordingly. 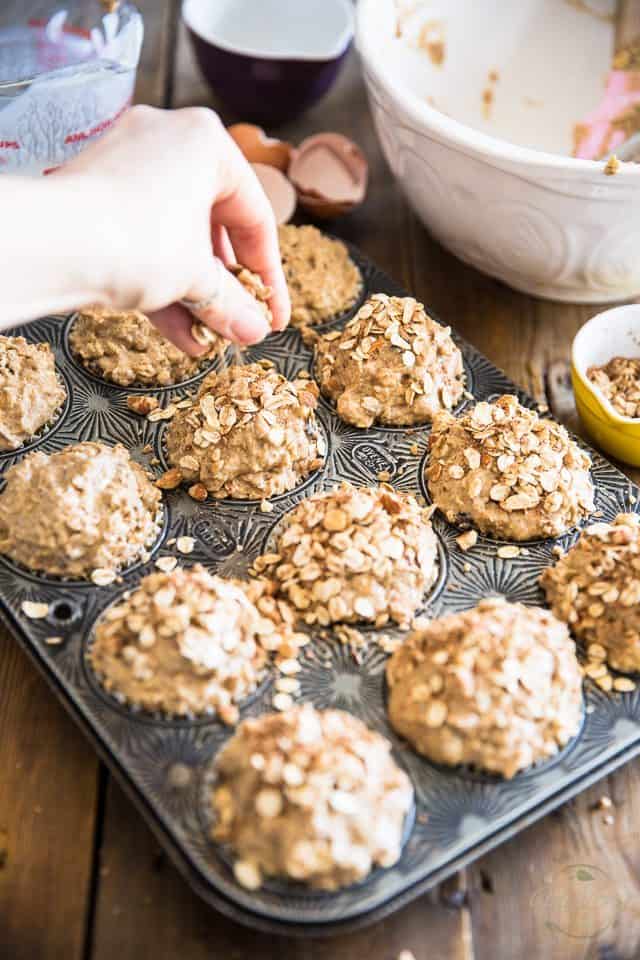 And now for the finishing touch, let’s make our muffins look extra pretty. Mix a few tablespoons of rolled oats, finely chopped almonds and a pinch of cinnamon and sprinkle that over the tops of the muffins. 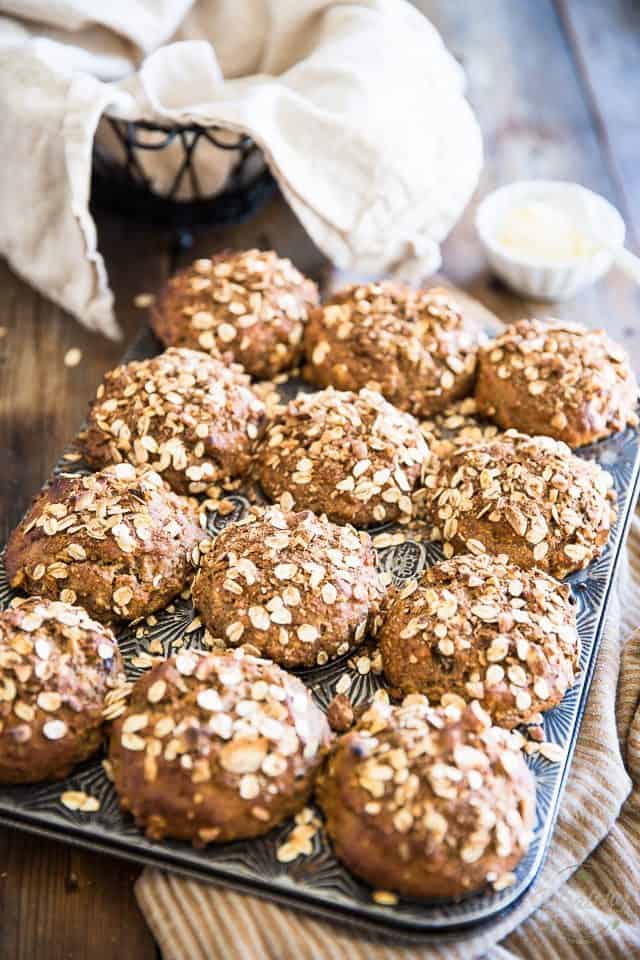 Bake your muffins in 400°F oven for 20 minutes, or until a toothpick inserted in the center of a muffin comes out clean.

Let the muffins cool for a few minutes in the pan then remove to a wire rack to cool completely (although I strongly suggest that you eat at least one while they’re still fresh out of the oven! Would be a shame to let that opportunity go to waste… ) 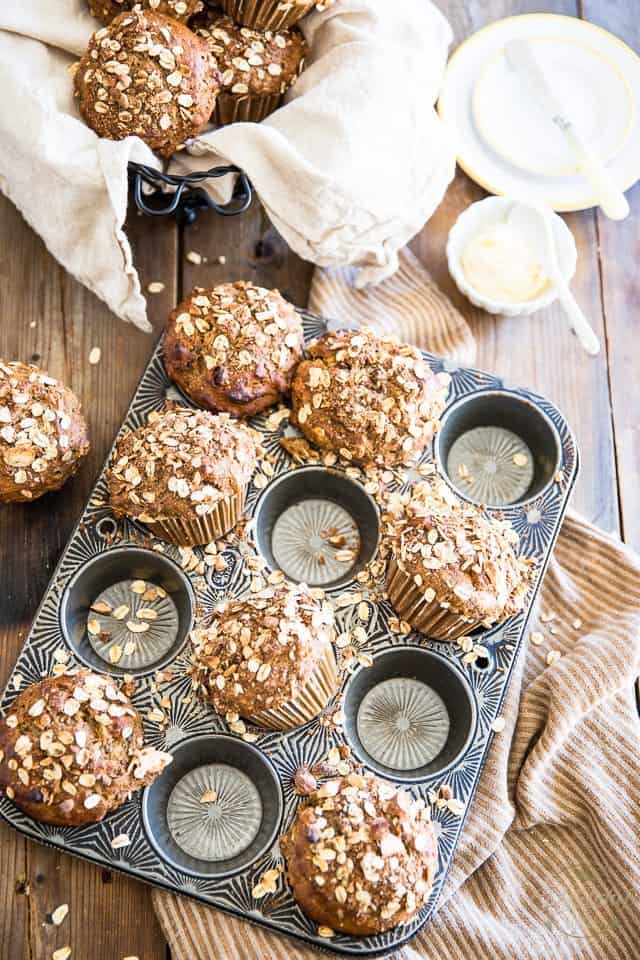 I know I just very recently said that my ultimate favorite muffins in the whole wide world were Bran Muffins, but now that I made these Raisin Oatmeal Muffins, I’m honestly not too sure anymore…

These guys are seriously, dangerously delicious! If they haven’t stolen the first spot, they’re really not far behind.

As if you needed visual help to get that done! 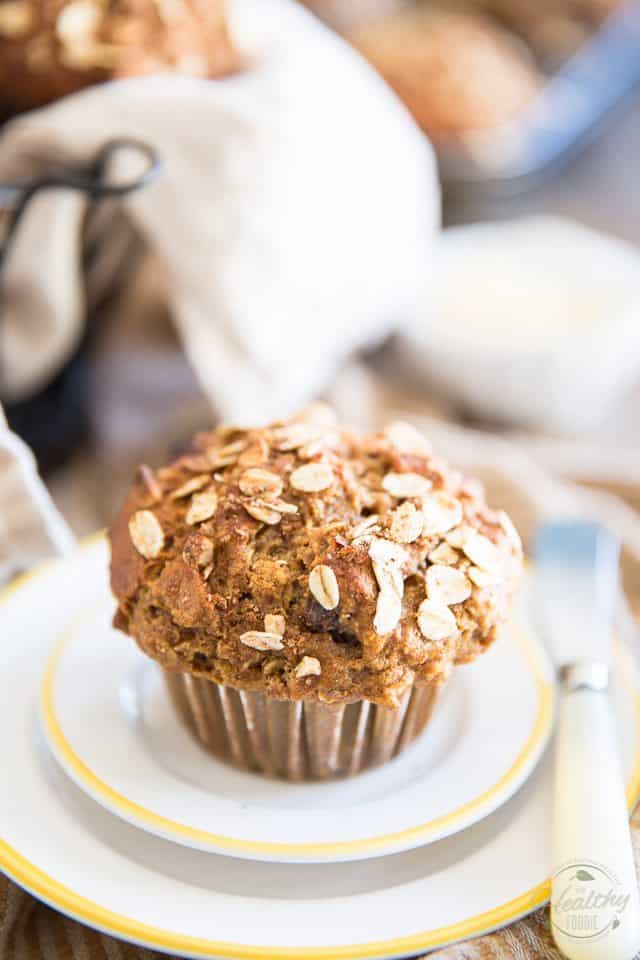 But hey, until you actually get to hold one of the real things in your hands, you can at least get a very good idea of what to expect! 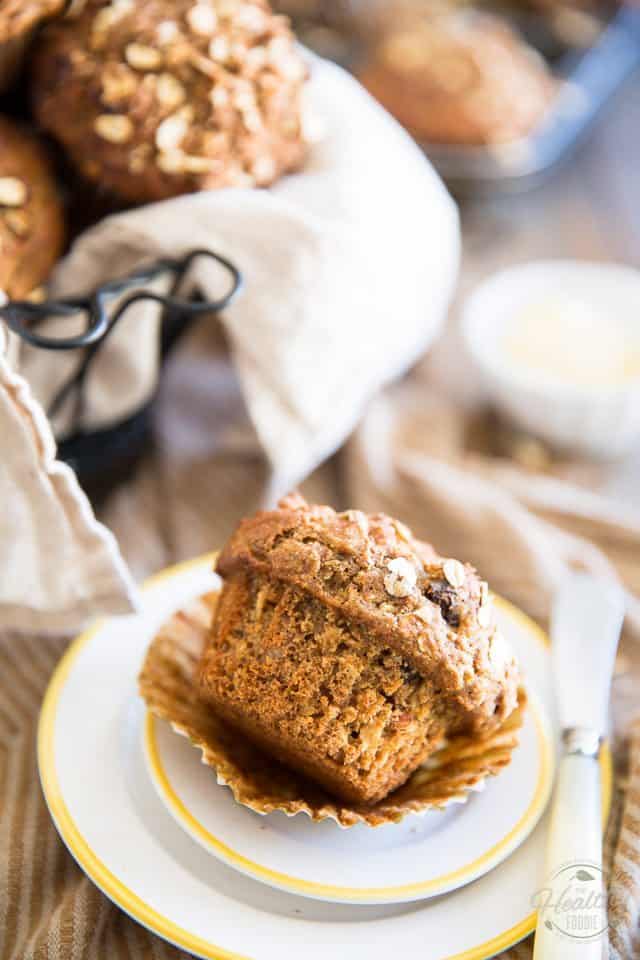 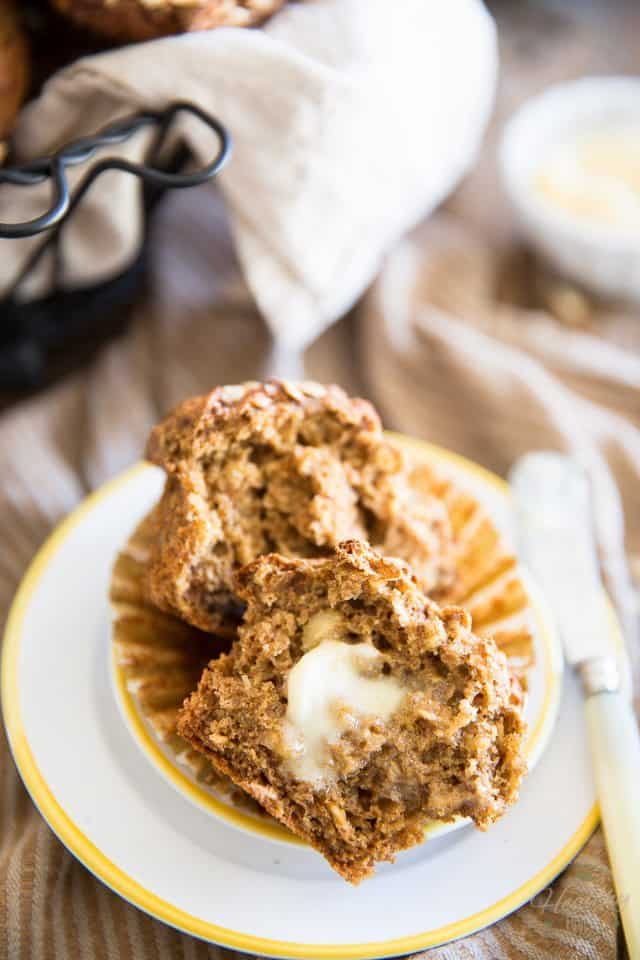 I couldn’t resist eating one right then and there, as I was taking pictures. That tempting little bugger even seduced me into topping it with a dollop of whipped ghee…

Oh my… the dream! Now I can’t wait to hear what YOU think of them. 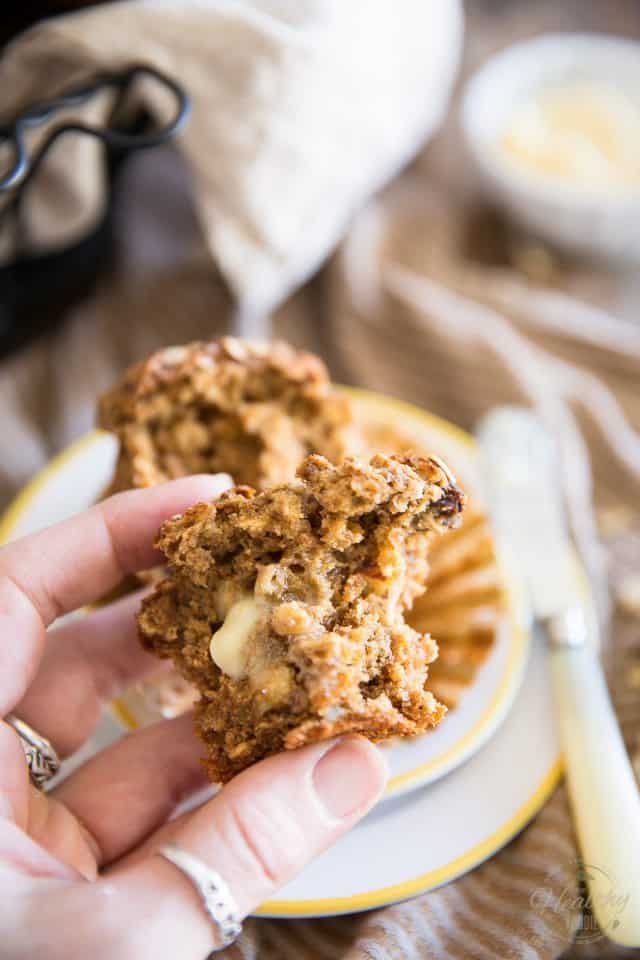 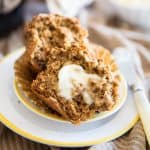