In this household, as is probably the case in yours too, Christmas is all about tradition.

And tradition is something that is NOT to be messed with!

For as far as I can remember, the menu has always been the same, save for those few times where my mom tried to introduce something new by sneaking in some funky seitan or millet pie or other meat free alternatives… unfortunately, her efforts were never received with much enthusiasm!

Like I said, tradition is something that is not to be messed with!

Of course, we ALWAYS have turkey, although the bird does seem to have gone through *very* slight variations throughout the years.

My dad used to always remove all the meat from the bones and pre-slice the breasts. He would then put it all back to soak in the cooking liquid and throw that back in a very low temp oven to keep it warm while it was waiting to be devoured by a few handfuls of hungry guests. There were a few times though where it has been served whole and throned right in the middle of the table. There was also this very memorable occasion where it got cooked and served upside down, but hey, we won’t spend too much time on the one, alright? Let’s just say we had a very good laugh that night and that it has become sort of a classic since…  😉

There are two other key components to our menu, and these two have always been cooked in the exact same way, using the exact same recipe, even though there is no actual recipe.  I have done it so many times, I just know it by heart and feel. 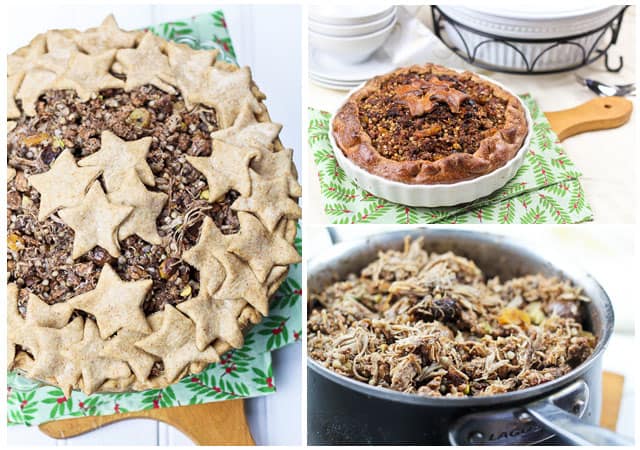 They are the traditional Christmas Meat Pie and what we call here “Ragoût de boulettes et de pattes de cochon”. I guess in English, it would be known as Meatball and Pork Shank Stew.

I remember spending all day in the kitchen with my parents as a kid, every single year on December 23, making pie dough (that was MY specialty, and I was darn proud of it, too!), meat pie filling and hundreds of tiny little meat balls. We’d always end up working up a storm until the wee hours of the night.

Growing up, it’s always been one of my favorite days of the year. So of course, as an adult, I kept the tradition going and started doing the same thing with my kids.

This year, however, I’ve decided to break the tradition. OMG! Sacrilege! But I’m afraid… it has to be done. 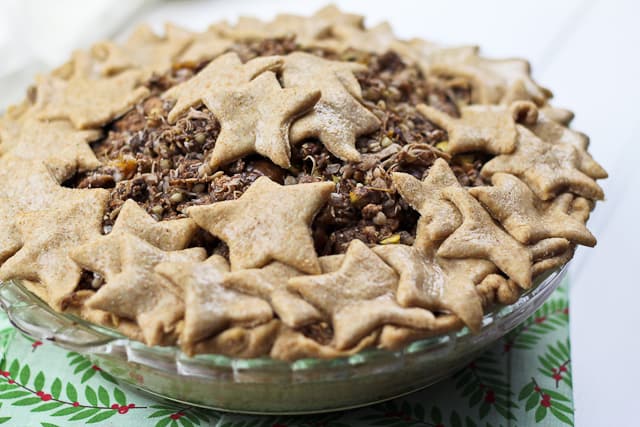 You see, both these recipes call for pork, and lots of it. Not the lean kind either. Nooooo. Regular ground pork, which is incredibly high in fat, as well as pork shanks, which are pretty much nothing BUT fat.

Since I have pretty much eliminated pork from my diet, I had to find an alternative.

I decided to use turkey. Nothing but turkey. No beef, no veal, and more importantly, no pork.

Still, I wanted the pies and stew to remain as true to the original as possible. Well, especially the stew.

The meat pies, I felt like adding a little twist to them.

More precisely, I added dried fruits and chestnuts. And I very glad I did! I love how they turned out although I haven’t really tasted them yet.

I only got to taste the filling on its own. I haven’t cut open a pie just yet, for you see, I only made two. One for Christmas Eve which I will celebrate here with my kids, and one for Christmas Dinner with the “extended family”. 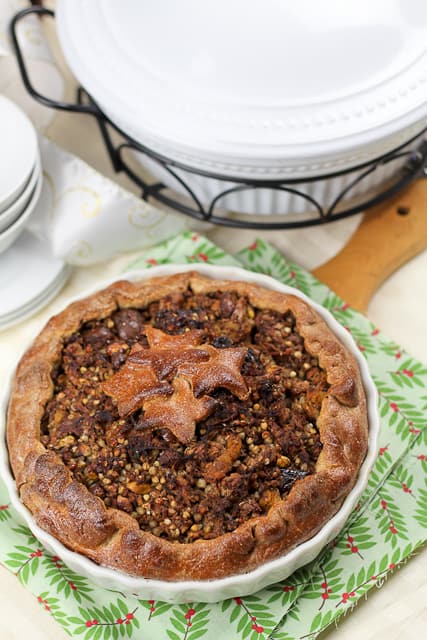 Yeah, you’re probably thinking that I am pretty darn daring, presenting you with a recipe that I haven’t tasted yet… Rest assured, I just KNOW it’ll be very good. That filling did have the Christmas-y taste that I was after, with the very loud notes of cinnamon and clove, accompanied by lighter tones of ginger and nutmeg. The dried fruits and chestnuts add a very interesting depth and texture to the deal, while the buckwheat adds a little crunch and takes care of absorbing all possible traces of excess liquid. 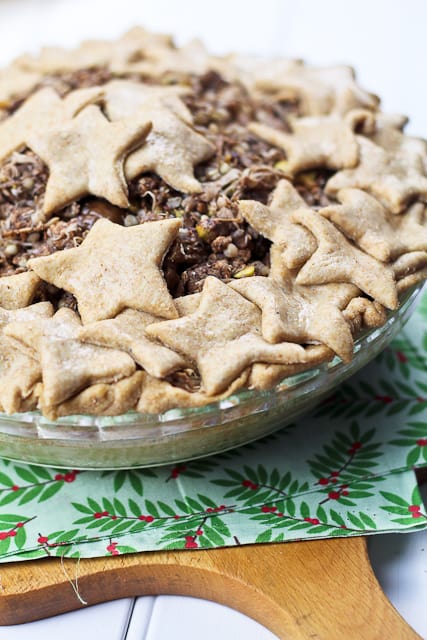 As for the dough, I’m already very familiar with it, so I just know it’s gonna work.

Maybe I could’ve waited until AFTER Christmas to post this, but I thought some of you might be inspired to make a healthier meat pie this year too…

Now, contrary to what I usually make, this one requires time, and lots of it. I think Christmas food is a food of love and has to take forever to make. You can’t expect to be in and out of the kitchen in a matter of hours. You have to be prepared to be in there all day.

But if you’re anything like me, you’ll enjoy every minute of it.

And tomorrow, I give you the meatballs…

Now THAT, I have tasted, and THAT is quite the success, too. I’m sure no one will ever be able to tell the difference between the traditional version and this new healthified one.

And look how gorgeous… You’ll see that these two just go hand in hand.

They are simply meant to be together! 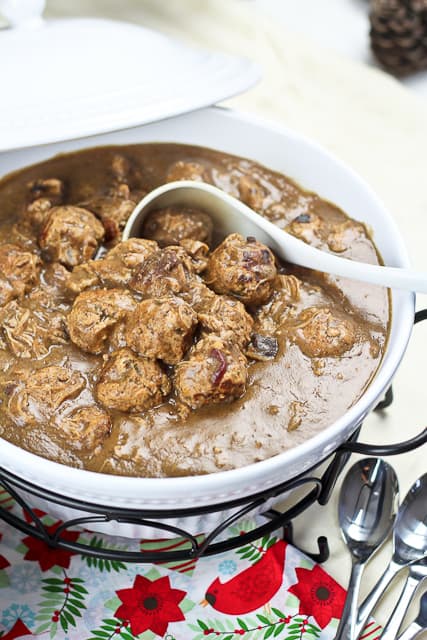 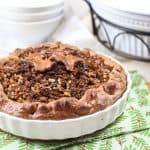 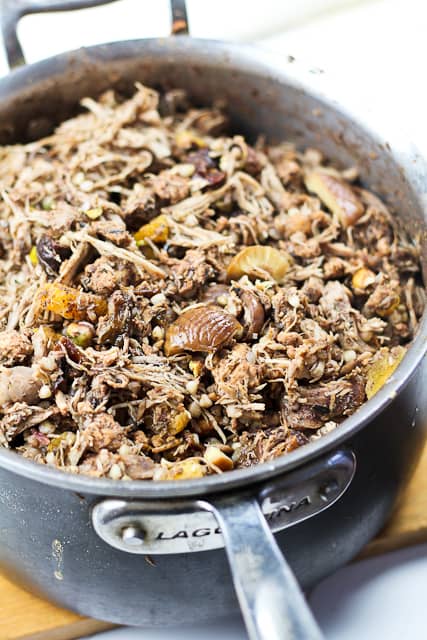 The filling ready to go into the pie shells… 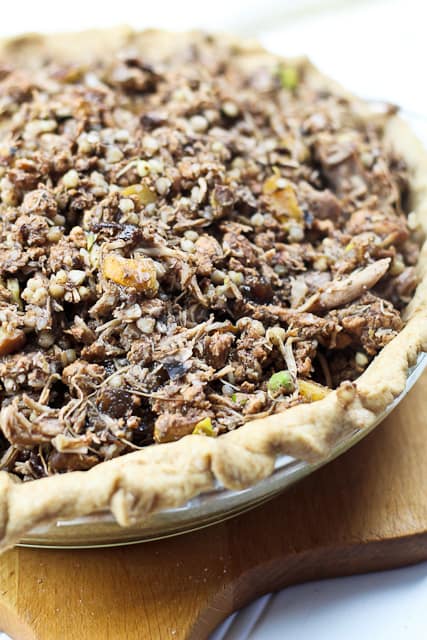 Really pile it up sky high! 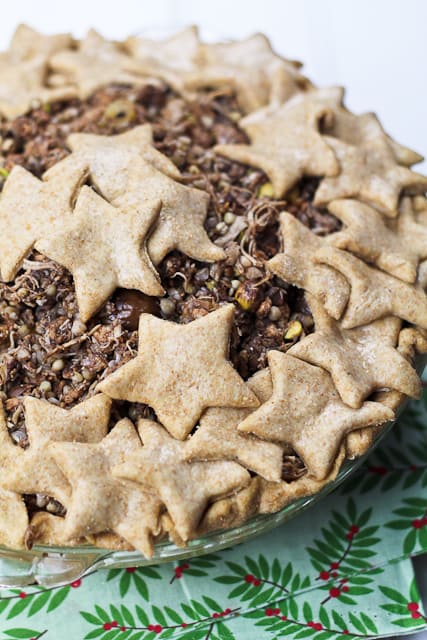 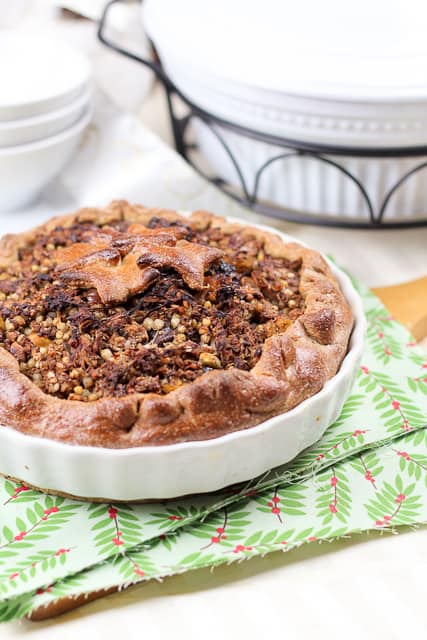 And I can’t wait to cut into this one!