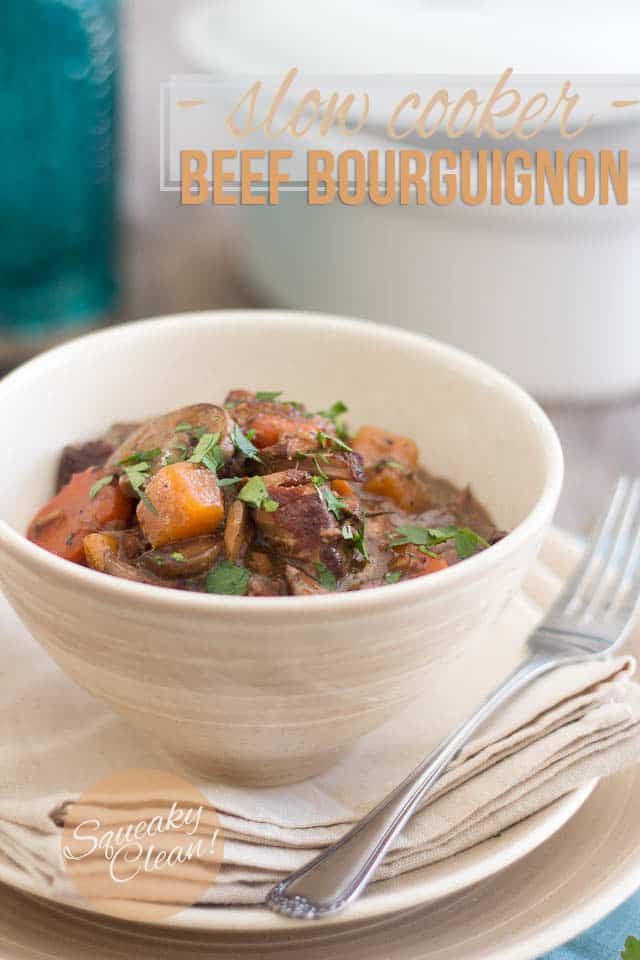 After I purchased my very first slow cooker a couple of weeks ago, I decided to test it by making a “really-busy-with-work-and-all-got-no-time-to-prep-just-dump-everything-in-the-bowl-then-press-the-on-button-and-be-on-your-way” version of a classic: Beef Bourguignon.

For that rendition, everything got conveniently dumped into the bowl of the slow cooker before being placed in the fridge to marinate overnight. Then, in the morning, it was set to cook slowly all through the day while the “chef” was out to work.

While the resulting stew was mighty excellent, I also wanted to test the “It’s-the-weekend-and-I-have-plenty-on-time-on-my-hands-so-I-can-brown-the-meat-and-all” method. 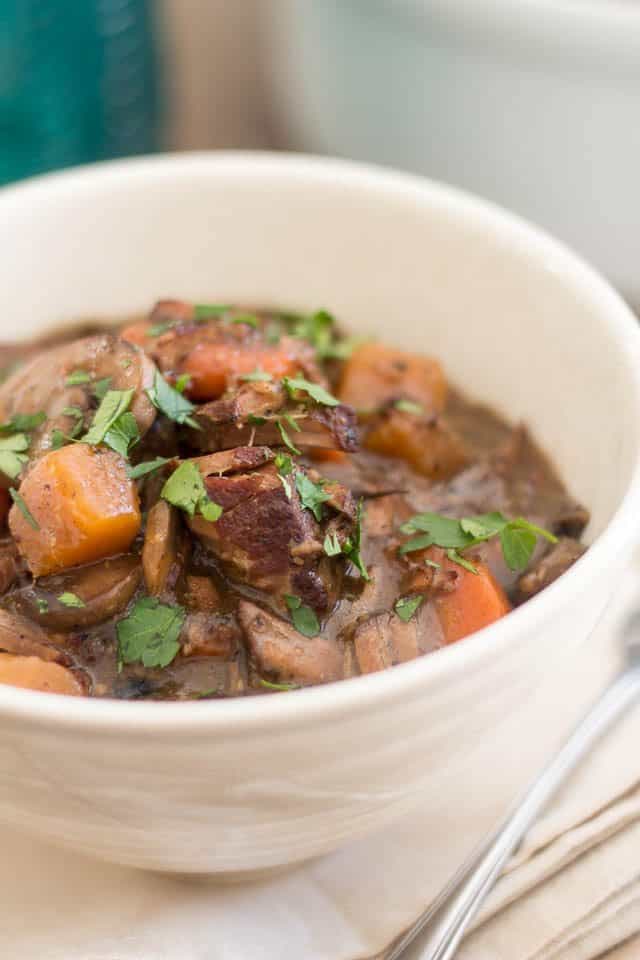 Although I was hoping to use the exact same ingredients, I was forced to make a few very minor tweaks to that list.

For starters, adding red wine to my stew was not an option this time as I am currently in the middle of a 30-Day Reset, as a part of the “Your Personal Paleo Code” program by Chris Kresser. As such, I have eliminated all forms of alcohol from my diet for the entire month of March. No choice, that had to be left out!

Secondly, I couldn’t find my beloved frozen pearl onions anywhere, so I was in no position to add them… I decided to sub rutabaga instead. Not a bad choice at all, if you ask me!

Apart from that, this second version is pretty true to the original. 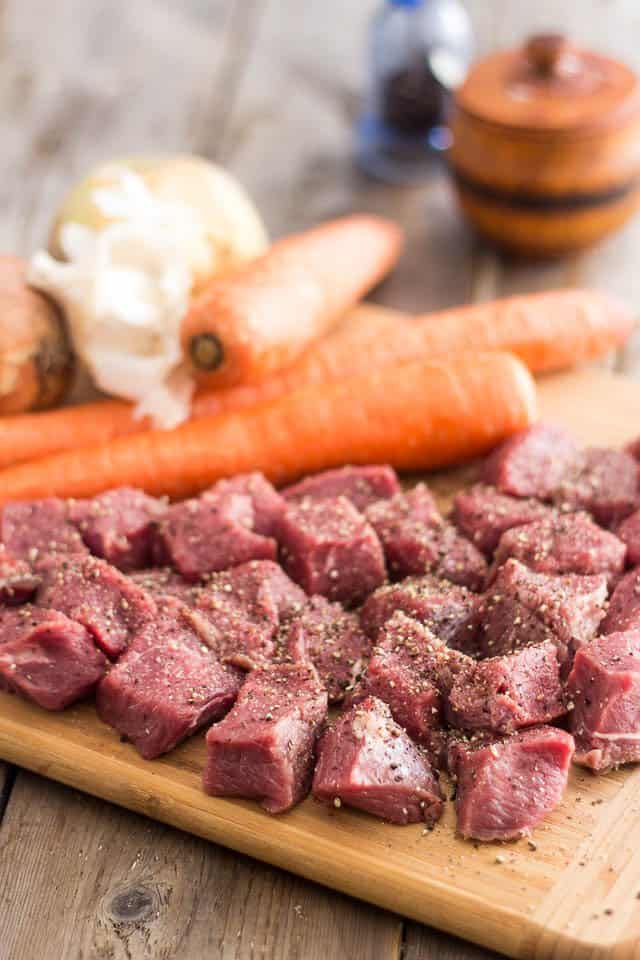 Only the prep will be slightly different this time. Since we’re going to be browning the meat, we want to make sure that it’s patted really nice and dry, as well as sprinkled with a generous dose of salt and pepper. 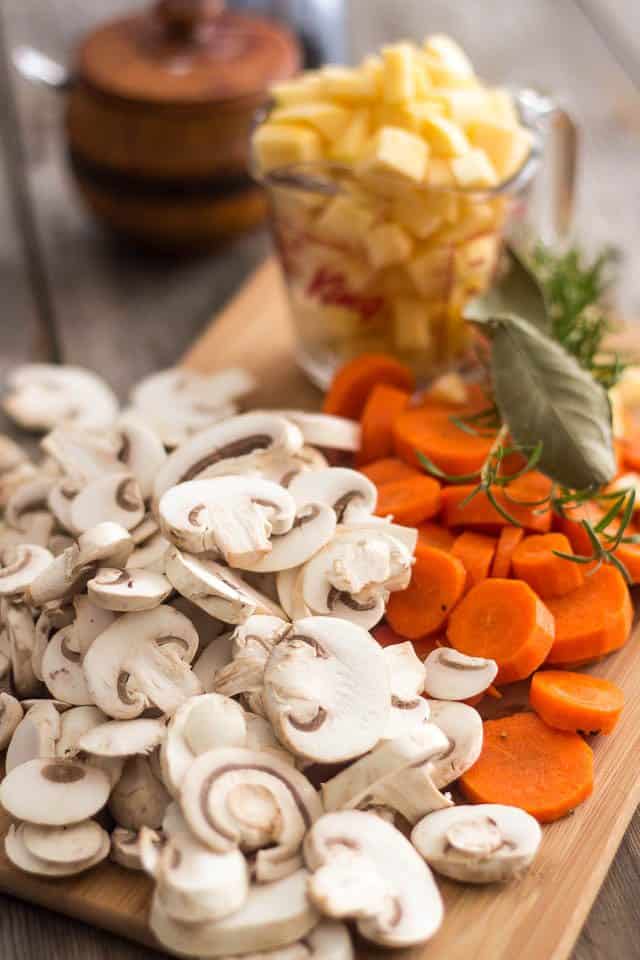 It’s always a good idea to prep your vegetables ahead of time! Peel, chop, slice and put all of this neatly away… 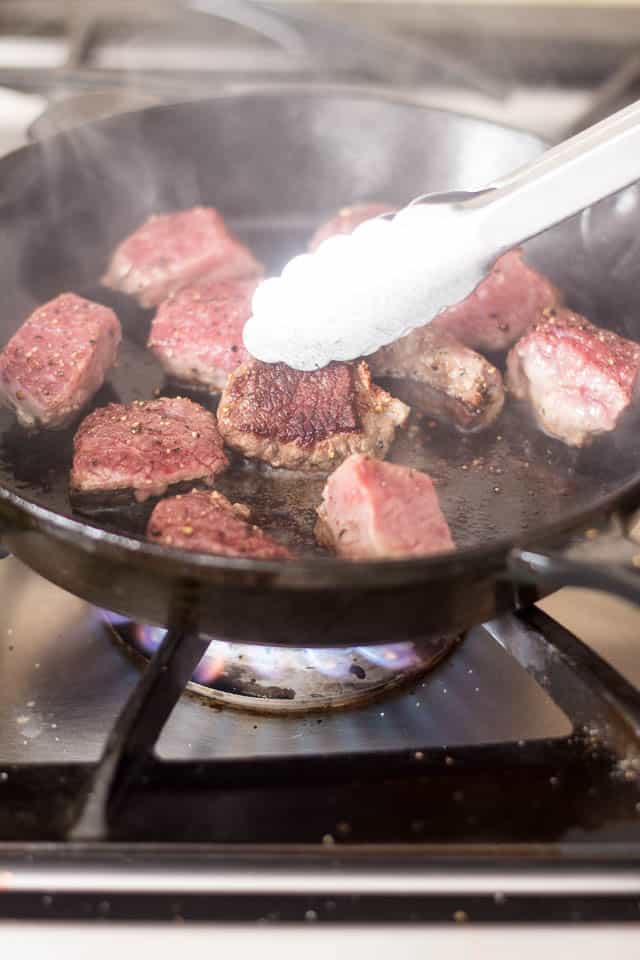 Now time to brown the meat. The secret to getting a nice golden crust like this is to 1- get your pan scorching hot, 2 – add plenty of fat, 3 – do not crowd the pan; work in several batches if you have to, and lastly, DO NOT move that meat around!

Just by looking at it, you should be able to tell that a nice crust has formed underneath. It’ll sort of show from the side… Only when that’s happened will you flip your meat. 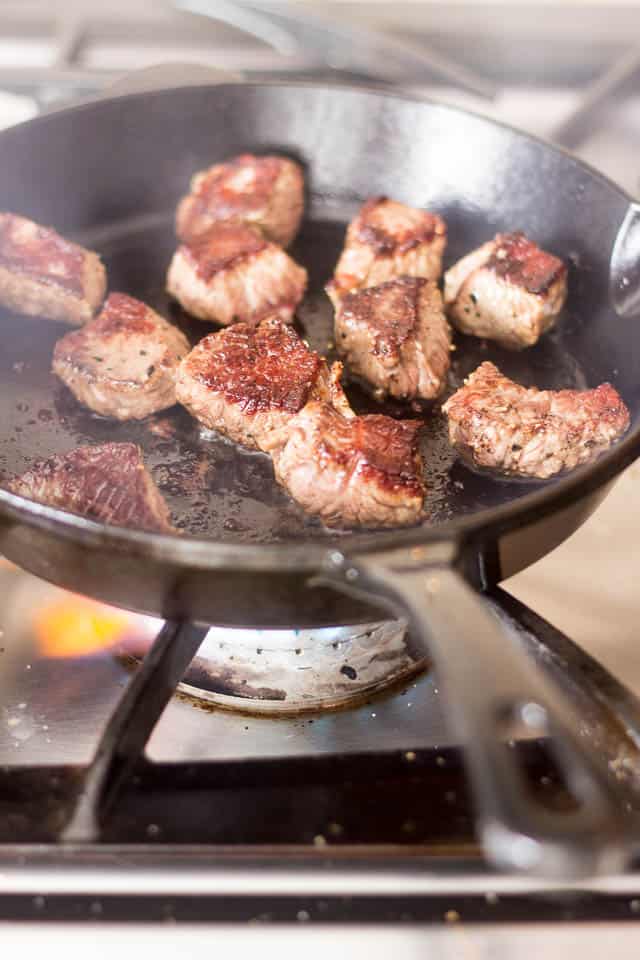 Do the exact same thing on the other side. No playing with the meat. Just leave it be. And feel free to add more fat if you feel more is needed. 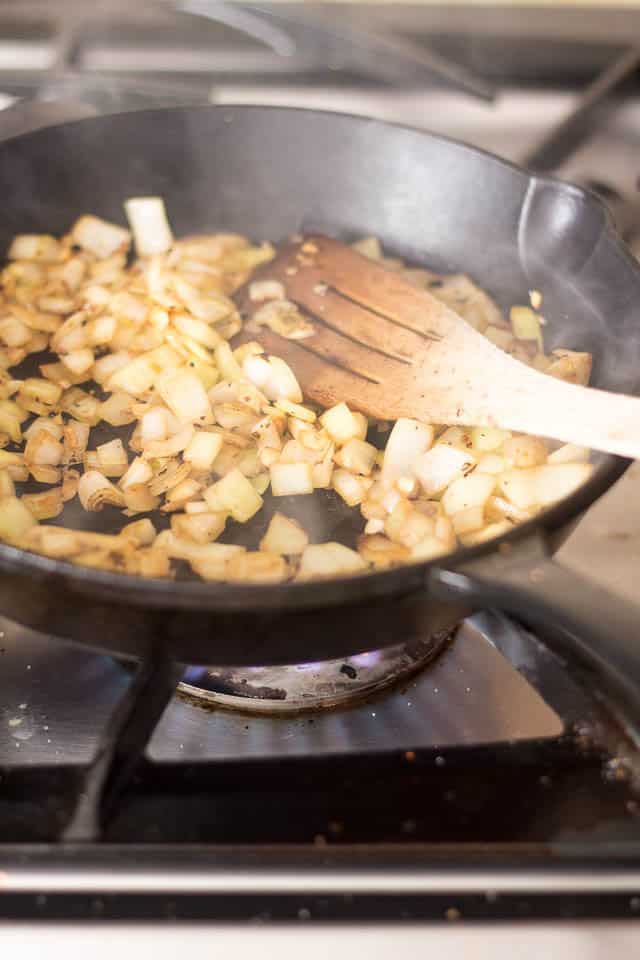 Once all the meat has been cooked, remove it to a bowl to catch all the juices, lower the heat to medium, add a little more fat to the pan if necessary then throw in the onion and garlic and cook, stirring often, until the onion is fragrant and becomes slightly translucent. 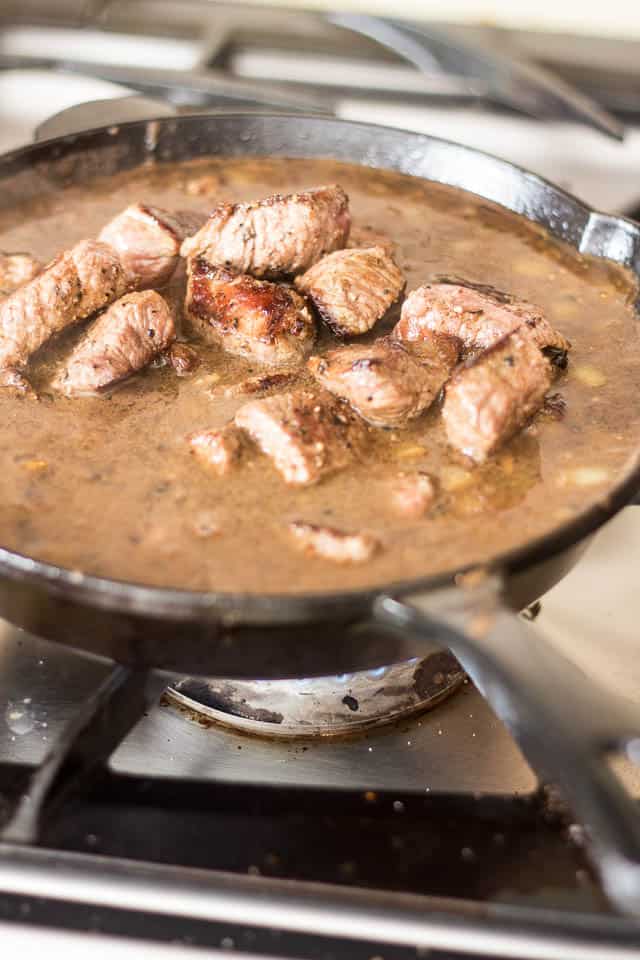 Add your broth, red wine vinegar, Dijon Mustard and bring to a simmer. Add the meat and meat juices back to the skillet, stir and kill the heat.

Transfer the contents of your skillet to your slow cooker then throw in the carrots, rutabaga and mushrooms that you prepped earlier. 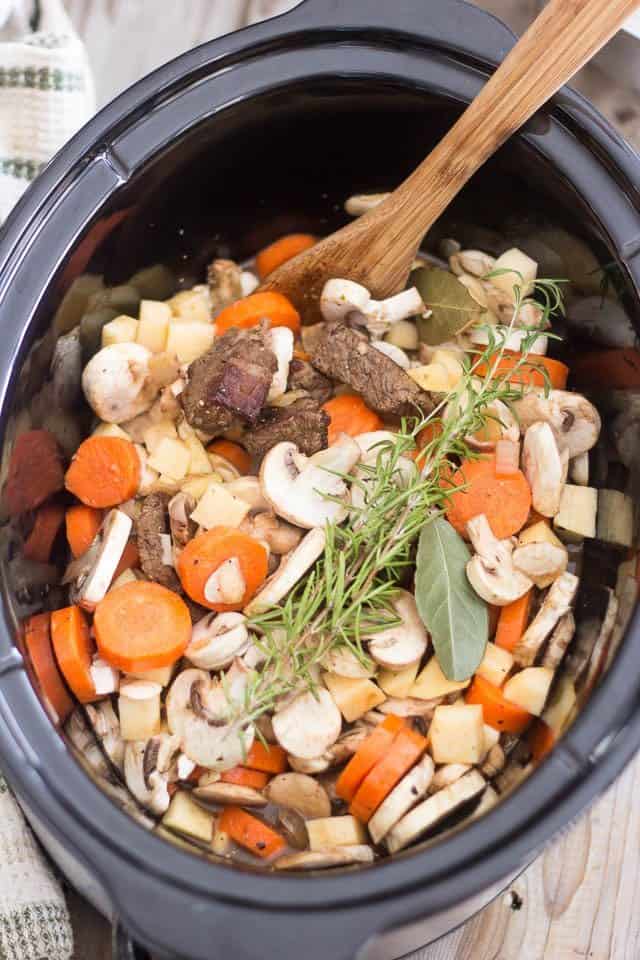 Stir one final time, add fresh rosemary and bay leaves then put the lid on and set to cook for 6 hours on high or 8 hours on low. 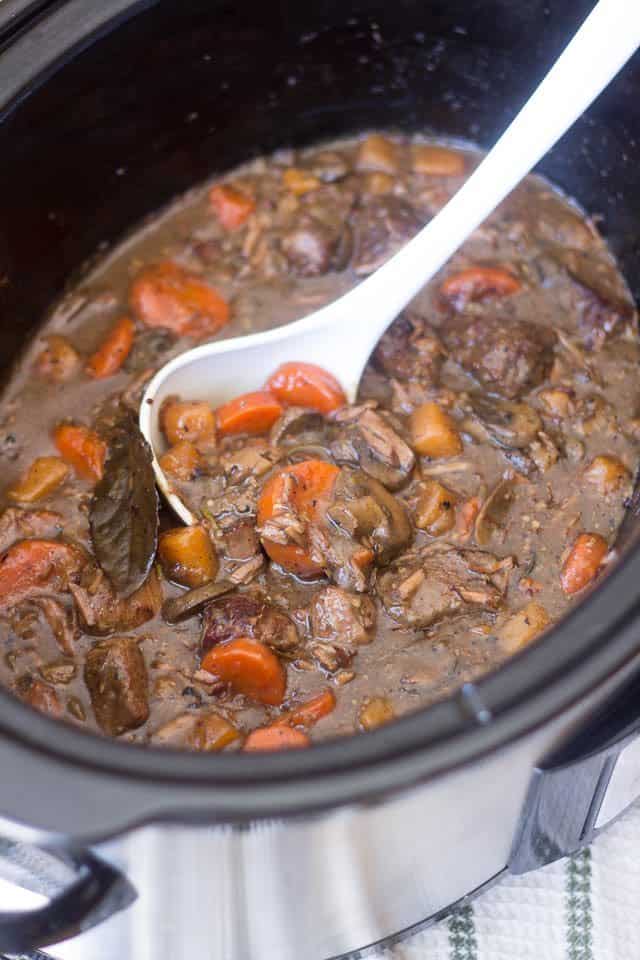 Once your stew is fully cooked and to your liking, you’ll probably want to thicken that sauce some.

To do that, ladle about a cup of the cooking liquid into a small saucepan and bring to the boil. Meanwhile, in a small container, mix tapioca starch and water together. Pour that into the boiling liquid and cook for a minute, whisking constantly, until thickened.

Transfer this thickened sauce back to the slow cooker and stir until well incorporated. 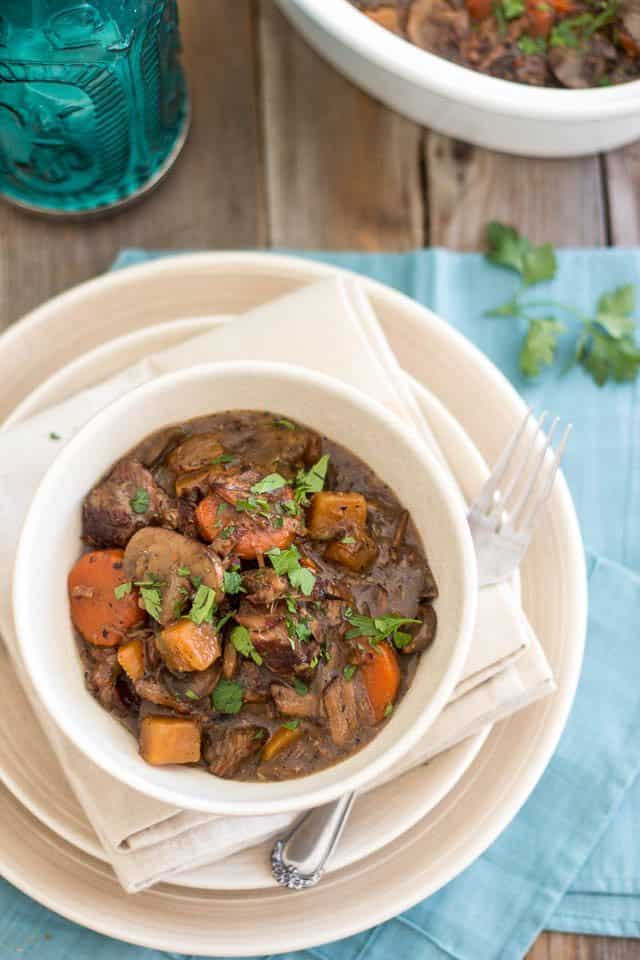 And now you are ready to serve! Ah! I wish you could smell this!

Despite the absence of red wine, this stew definitely does not lack flavor. In fact, I would say it has even more depth in that area than the previous version. The browning of the meat definitely played a big role in adding mucho gusto to this dish.

Plus, I was able to go get some of the pungency that is usually provided by the wine by adding wine vinegar and Dijon mustard. You’d be surprised what miracles these two ingredients combined can do to the up the zing factor of a dish. 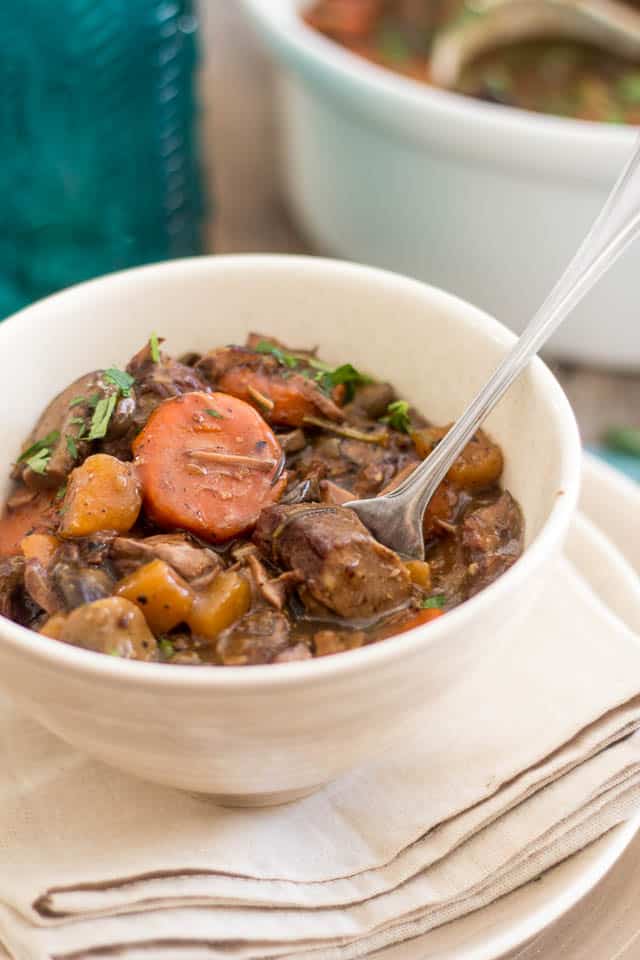 Honestly, I much preferred this version to the previous one. Oh, I’m not saying that I would never make the original ever again, but I will definitely reserve it for those circumstances where time is really of the essence.

You can be certain that if time permits, I will definitely favor this version. It does require slightly more effort, takes a little bit more time and dirties a tad more dishes, but it’s all entirely worth it.

I think that next time, I will make a double batch. I’m sure this freezes wonderfully!

Oh, and I will add red wine, too! Just because… 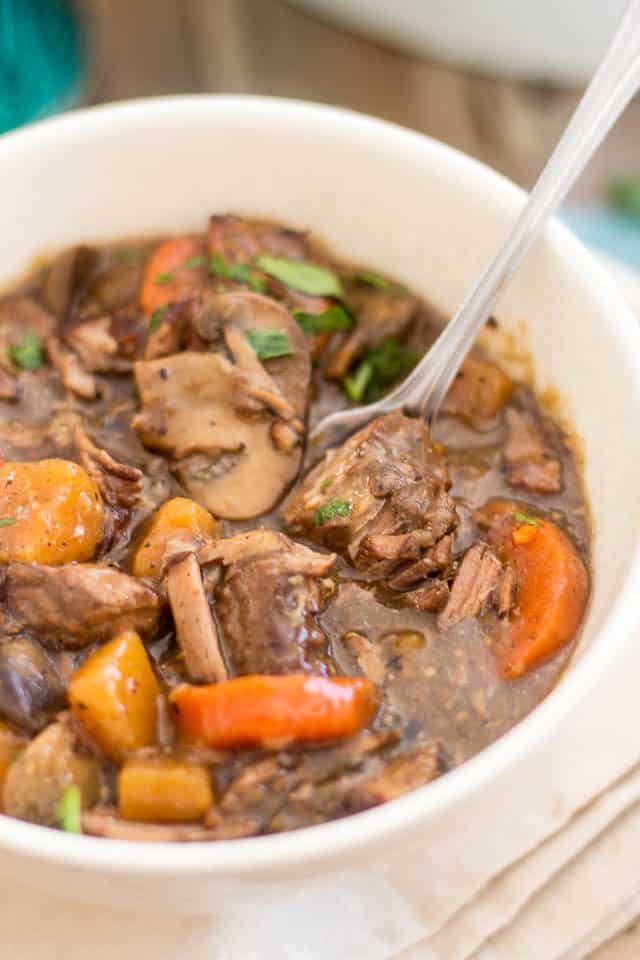