Sometimes, you know, it’s nice to do things a little differently…

I was in such a mood the other morning when I created this dish.

For some reason, I really felt like having an omelette, but I didn’t feel like staring at some big yellow disk just sitting there, covering the entire surface of my plate.

And simply folding it in half wouldn’t cut it either. I needed to come up with something else.

Then I thought to myself: – Why not sort of “line” a bowl with the omelette and then stuff it with all kinds of goodies? Yeah, just like I used to do with soft tortillas… that might work! And it sure would be different!

Well, work it sure did!

And different? It sure was! 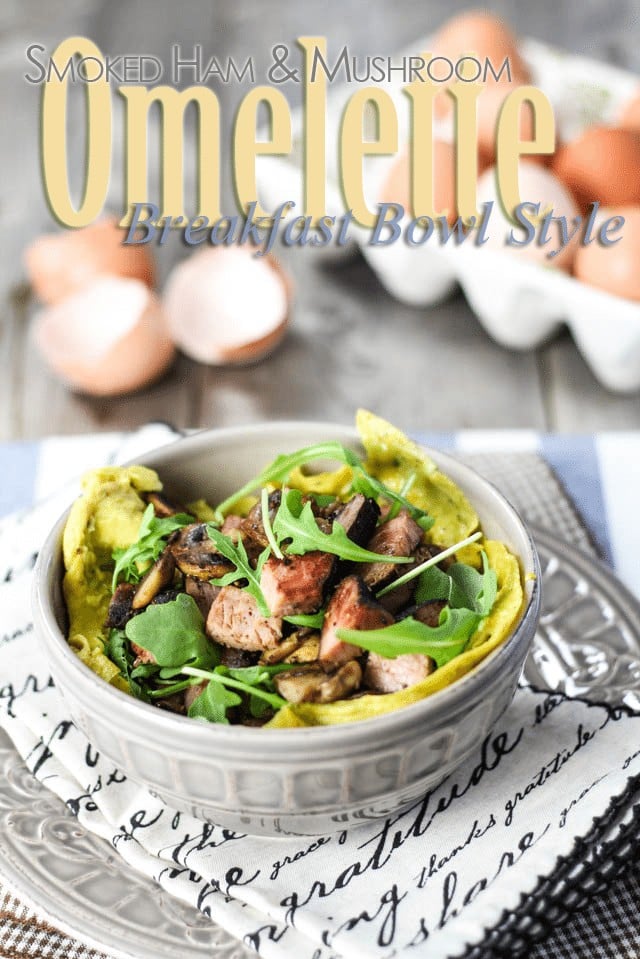 Granted, it was still a plain ole omelette, but serving it this way sure took gave a new perspective to this dish.

At least, I think it did.

I have to admit that getting that omelette to fit neatly in the bowl was a bit tricky at first. Trust me, it’s much easier to just fold it in half and slide it right onto a flat plate.

But this is just so much more fun, I think it’s worth the trouble.

I can’t really think of a cooler one myself!

And hey, after doing this a few times, you sort of get the hang of it… I found that folding the omelette in half, or even in four, much like you would a pie crust, really helps in getting the job done. 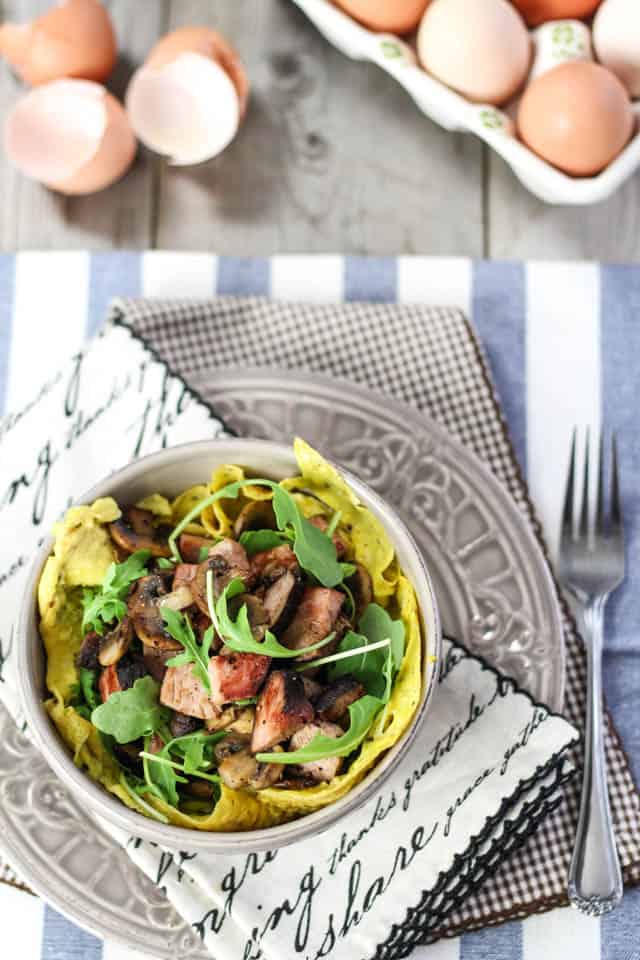 Once your omelette is comfortably resting at the bottom of that bowl, you can go nuts and stuff it with pretty much any garnish that tickles your fancy.

For this particular version, I chose to use some beautiful Black Forest Smoked Ham that I had in the fridge, along with a few sautéed mushrooms and fresh arugula leaves.

Still, I could’ve easily added a few grape tomatoes to the deal, or a handful of sliced olives.

A little sprinkle of crushed toasted hazelnuts would have been great, too!

Or even pine nuts… or pumpkin seeds! 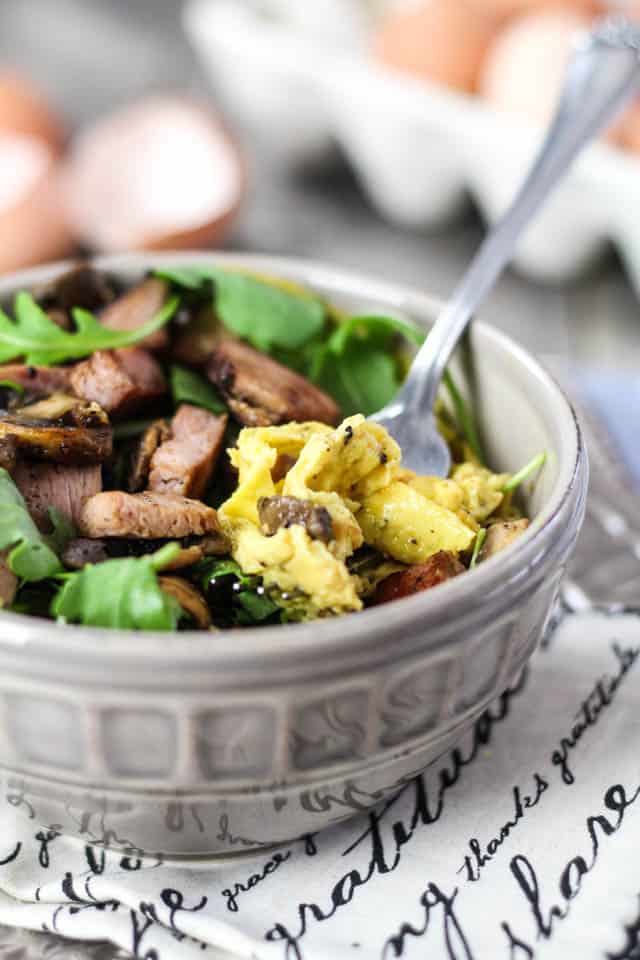 As well, you could very well replace the ham with cooked chicken, or even ground beef, why not?

This would also be a fantastic way to use leftover roast, be it pork, veal, lamb or beef.

Replace the arugula with steamed broccoli florets, or chopped collard leaves, why not? Oh, and I bet sun dried tomatoes and walnuts would be amazing in there.

As you can see, the possibilities are simply endless here.

And I think I just found me a new fave Breakfast Bowl! 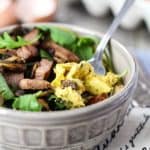 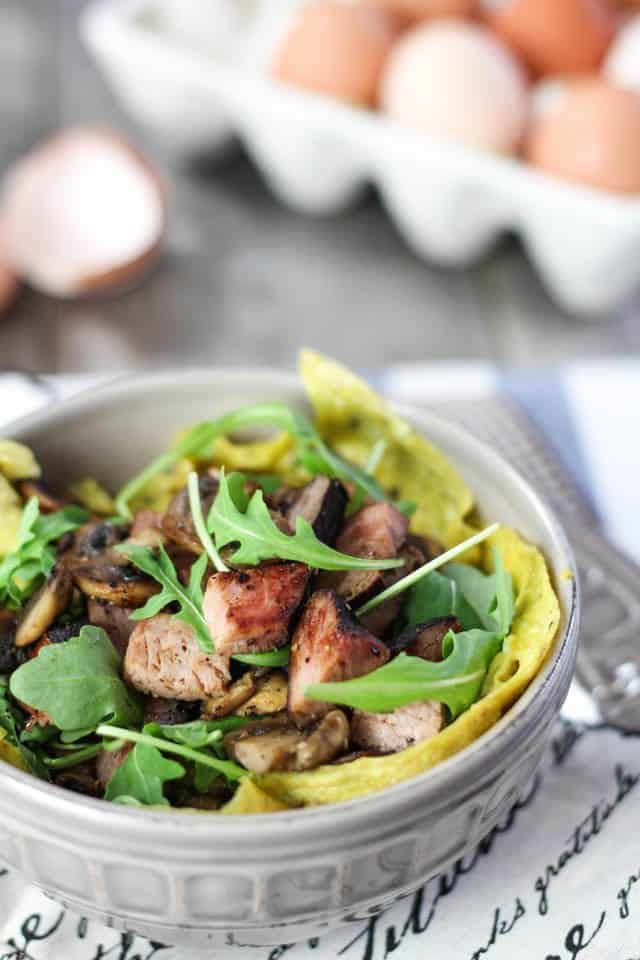 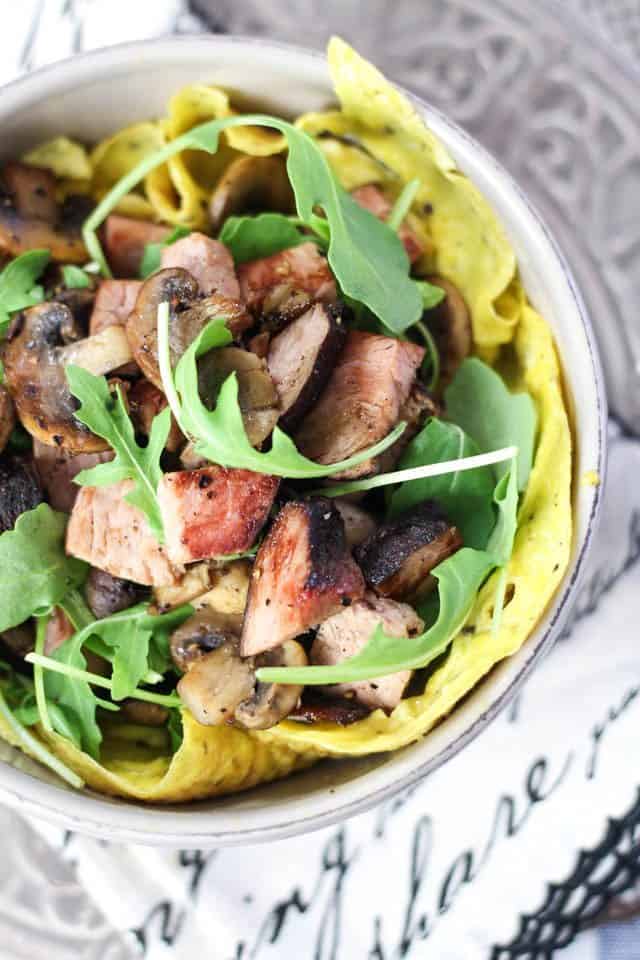 posted by Sonia! The Healthy Foodie on September 23, 2013