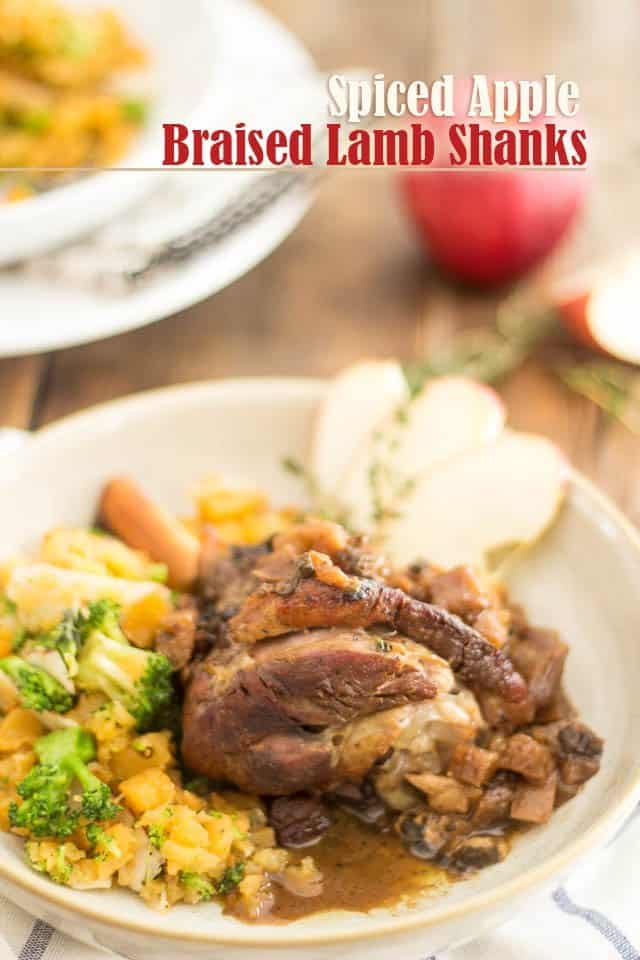 I’m now 36 days into my Whole30 challenge and I continue to be super inspired in the kitchen! So much so, sometimes I wonder why I don’t simply keep at it perpetually. I guess it would probably become a little bit too much eventually; I mean, one does have to live a little, you know… But I’m thinking that I should at least do it more often.

I can’t believe it had already been a year and a half since my last round! That’s way too much! I’m thinking I have to do this at least 2 to 3 times a year.

In case you’re a bit puzzled by that 36 day mark, out of a 30 day challenge, let me clarify: I felt like I needed more than 30 days to get things back on track, so I decided to turn this into a Whole60 instead. But since there is no such thing as a Whole60, well, I still have to call it Whole30, don’t I? I know, even I get confused! And I lose count of days, too. I just keep in mind that I am to keep at it until April 1st, inclusively. That’s all I need to remember. That, and well, the list of all of the stuff that I’m not supposed to eat! 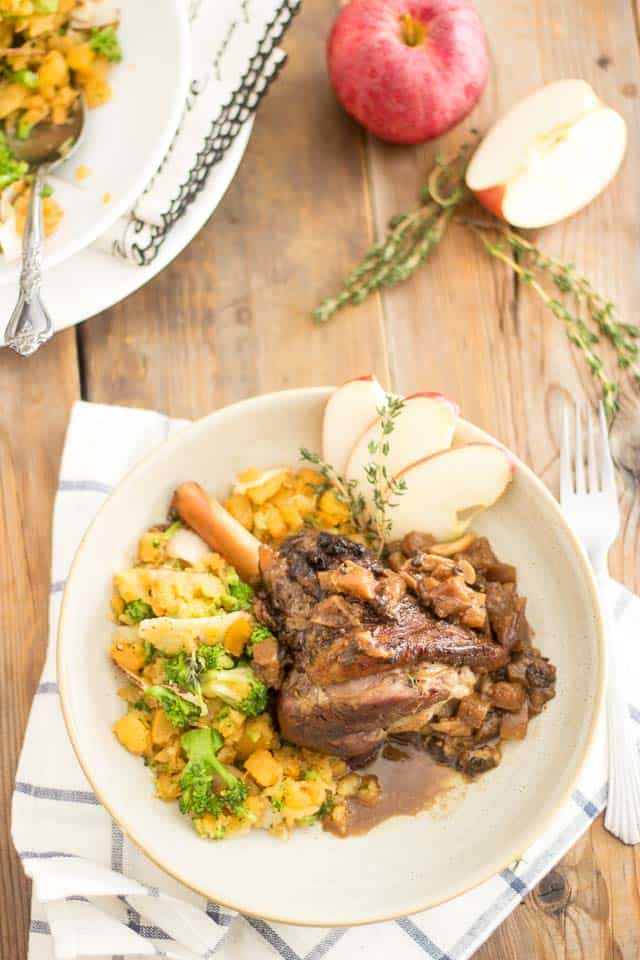 To be honest, though, if I am to keep coming up with dishes as good as these Spiced Apple Braised Lamb Shanks, I barely even see a need to stop.

Mind you, my birthday is coming up soon. There just HAS to be cake on my birthday. Especially since it happens to coincide with Easter this year. Can you say chocolate? Oh yeah! In fact, I’m planning on making a Paleo version of my ultimate favorite cake: Opera. Drooooooooool. But let me not think about it for now. For the time being, let’s Whole30 on!

And let’s make some delicious food! 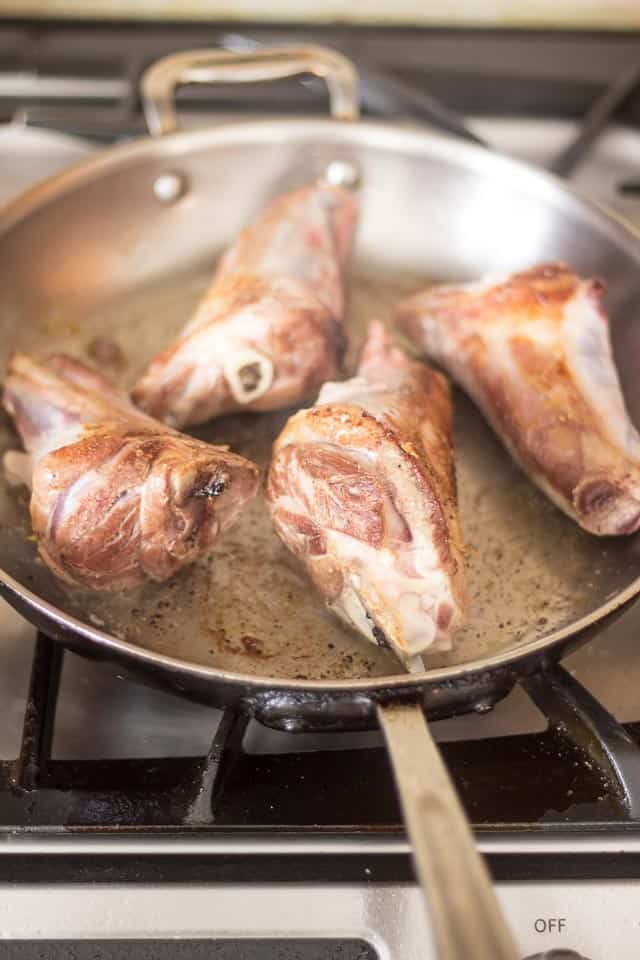 As always when using the oven, you want to preheat it. Turn that knob all the way up to 300°F.

Pat the lamb shanks dry and sprinkle them generously with salt and pepper. Then, melt the coconut oil in a heavy skillet set over high heat.

Add the meat and cook until a beautiful golden crust forms on all sides, which should take about 3 minutes per side. The key to getting that beautiful crust to form is to not move your meat around. Just leave it alone while the magic is happening! I know it’s hard, sometimes, but trust me, you have to. Keep your hands busy, chop some apples, why don’t you?

When the shanks are nicely seared, move them to a 4½ quart Dutch oven. 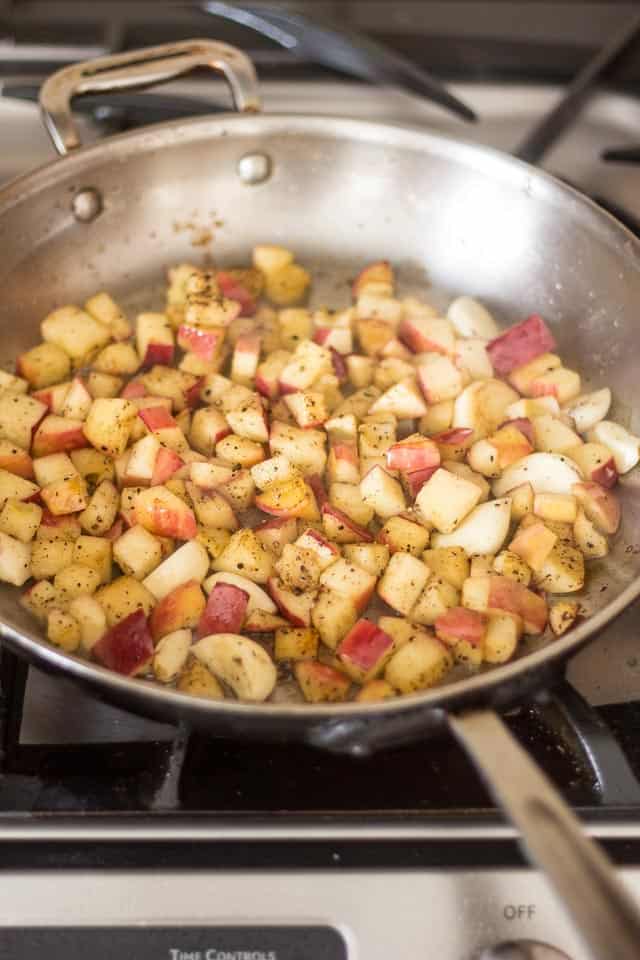 Put your skillet back over the heat source, lower the heat to medium, add a little more fat to the pan if necessary then throw in the apples, garlic, salt and pepper. Cook, stirring often, until the apples become fragrant and turn a beautiful golden color.

Add that to the Dutch oven with the meat.

Oh, and about the apples, make sure you use a variety that won’t turn to mush after it’s cooked. 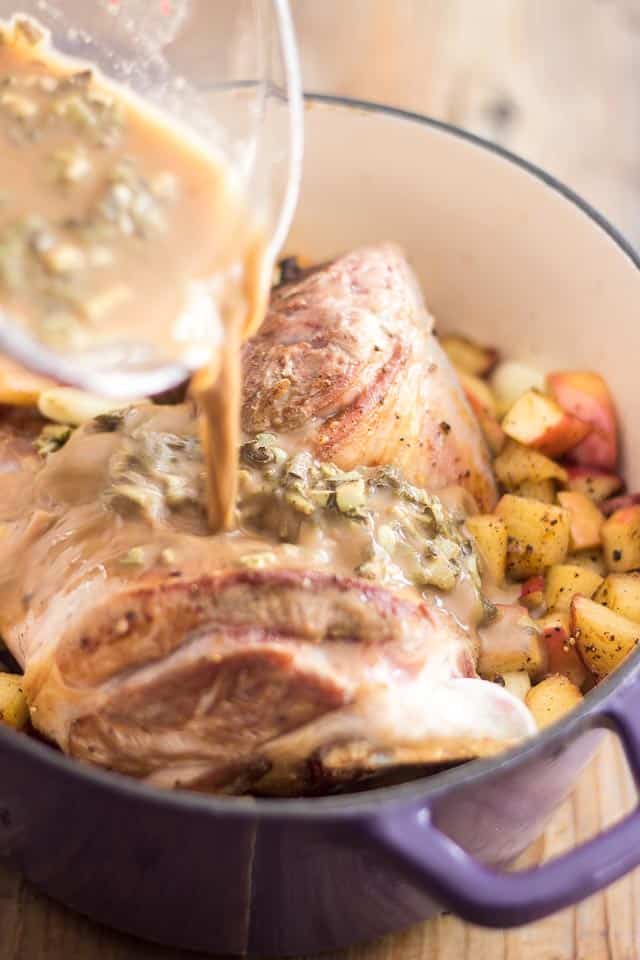 Mix the chicken stock, Dijon mustard, balsamic vinegar, chai spice and fresh sage in a large glass measuring cup, and then pour that over the meat and apples.

Note that, at this point, you could put this in the refrigerator and let it marinate overnight, or until you were ready to bake it. Just sayin’, you know… in case you were wondering! 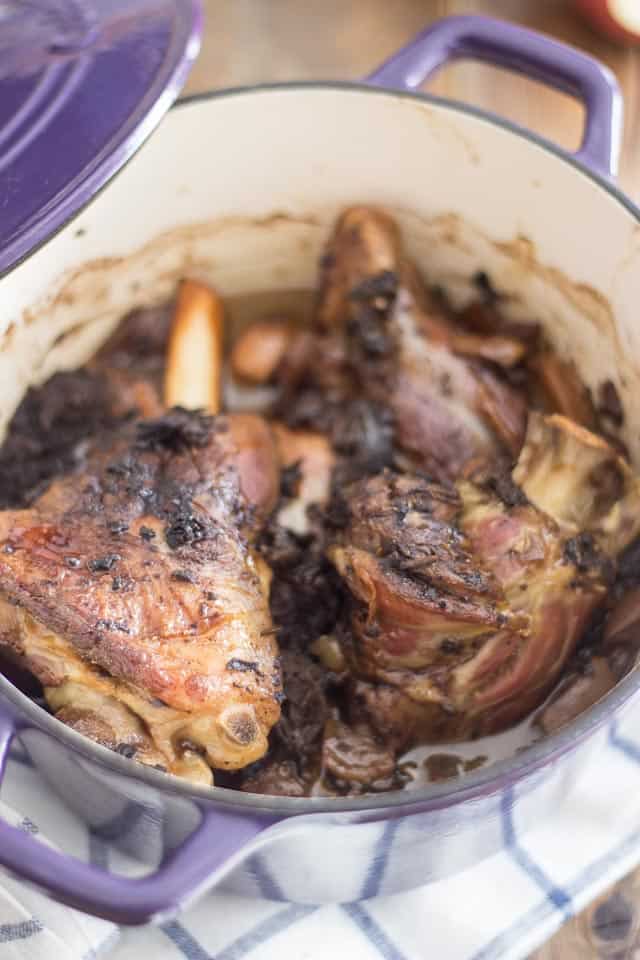 Bake your lamb in a 300°F oven for 3 to 3½ hours or until the meat easily detaches from the bones. 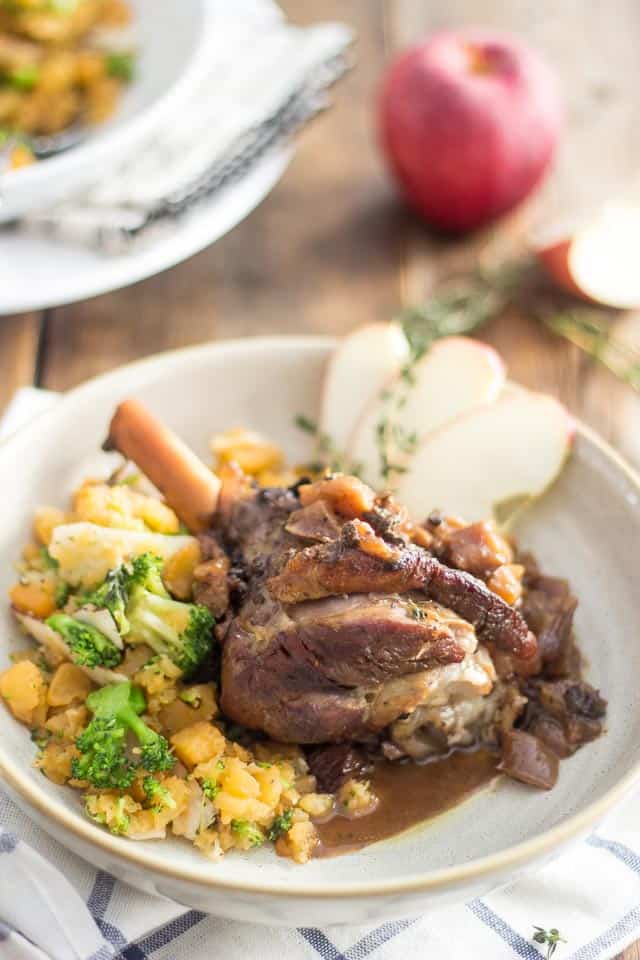 As for me, I chose to serve mine over a bed of some of that Rustic Coconut Rutabaga Mash I’d just made. Although I was extremely skeptical that the union of so many disparate flavors would work all that great, it turned out crazy over the top deliciously fabulous. 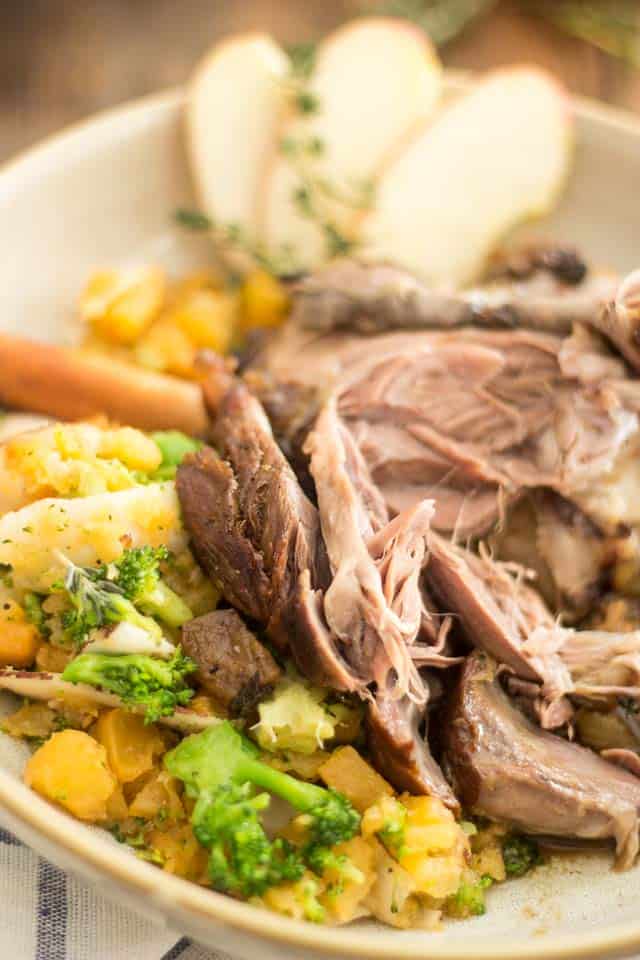 Just look at that meat! OH! So moist, so tender and so TASTY!

Not to toot my own horn, but this astonishing flavor combination tastes just like it has been created by an assemblage of angels, right up there in the 7th heavens. And honestly, I’m not just saying that… I would’ve gladly paid top dollars in a fancy restaurant to be served a dish this good.

Luckily, I didn’t have to do that; I made this in the comfort of my own home, for a very reasonable amount of dollars. And the best part is, I can repeat the experience whenever I want.

And now, so can you! Because unlike fancy restaurants, I happen to be sharing my culinary secrets, and don’t even charge you a cent for that!

How very nice of me, I know! No need to thank me, my good friends. The pleasure is all mine! 😉 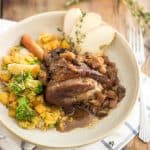 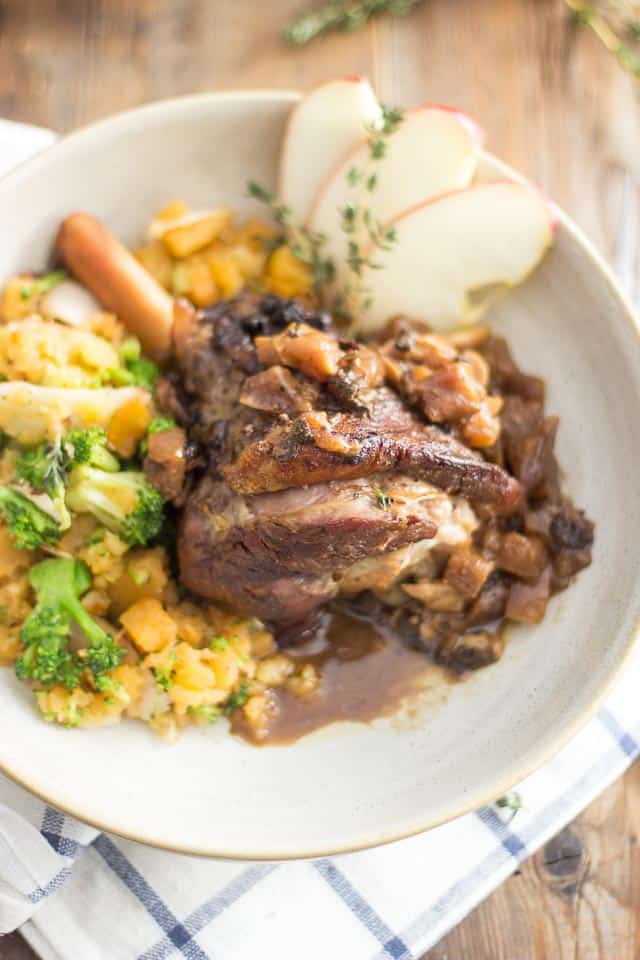 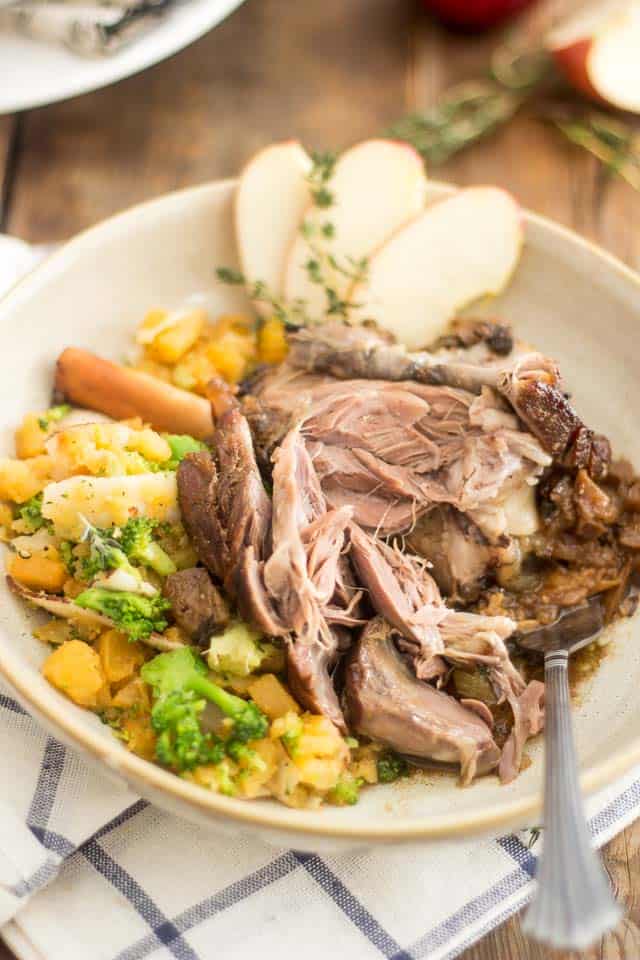