Last but not least, this is the cake I elected to make for Christmas night at my mom’s with the whole family. I had spotted it a few months ago, again, on Jennifer’s site (looks like she is my inspiration for all things decadent!)

This cake was no deception. It is absolutely divine. Decadently sweet and rich, not too salty (in fact, I think I would’ve liked it a bit more salty) the hint of caramel, the rich silkiness of the icing, the moist density of the cake, it’s by far one of the best cakes I’ve ever eaten.

Oh and it was huge. Just look at the size of it! I had made one and a half times the recipe because I wanted to be certain that there would be enough for 18 people. Trust me, there was more than enough. One recipe would have been plenty. But it wouldn’t have been this impressively big. And I liked that. It was an impressive cake, and very nice to look at!

If I ever make this one again however, I would add a little bit more caramel. Maybe it just got absorbed by the cake a little bit too much, since I put it in the middle of the cakes after cutting them in half instead of just putting it on top, like the recipe says, but I find there could have been a little bit more gooeyness coming from that absolutely delicious caramel. I thought it would’ve oozed a little bit more. Also, I would sprinkle more salt on top of the icing between cake layers. Other than that, it was perfect. Oh, no, wait. Maybe I would wet the cakes with a splash of booze, such as rum, or Frangelico, just to make them a little moister (not that it’s all that necessary…)

Just look at that frosting!

That is nothing but chocolate, heavy cream, sugar and butter. It’s almost like eating a truffle with every bite! Yum factor: 15 on a scale of 1 to 10! 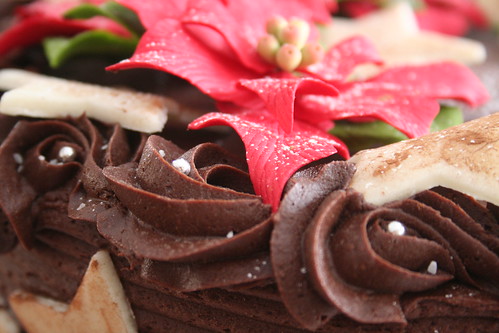 I am that bad. I had to take pictures even at the party, telling everybody it was for my blog, thinking they would totally understand. Well, I think they did… sort of! 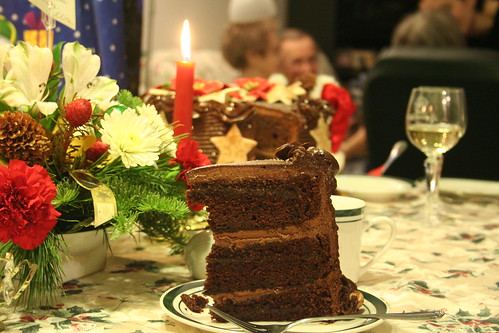 Just look at that caramel! Seriously, the more I look at it and the more I talk about it, the more I think I will be making this one again for Christmas next year… 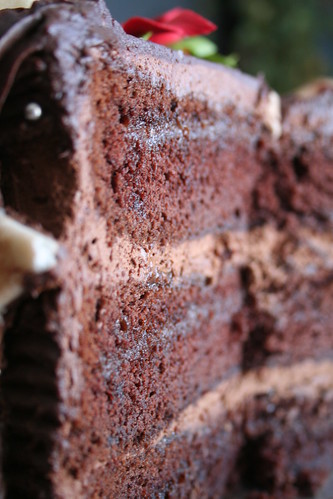 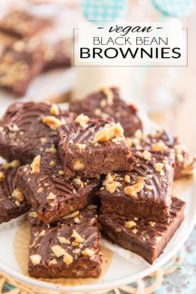 One Comment on “Sweet and Salty Cake – Christmas Edition!”