Now I know what you’re thinking: “Pfffft… just barely out of it and you’re already stuffing your face with Ice Cream! I think you missed the point, there, Sonia!”

Well, sorry to disappoint, but that’s not exactly the way it went.  (Although by the time you get to read these lines, I may or may not have indulged in one or two of these Paleo Chocolate Chunk Cookies…)

I actually made this ice cream waaaaay back in June, before I even embarked on this great food challenge. 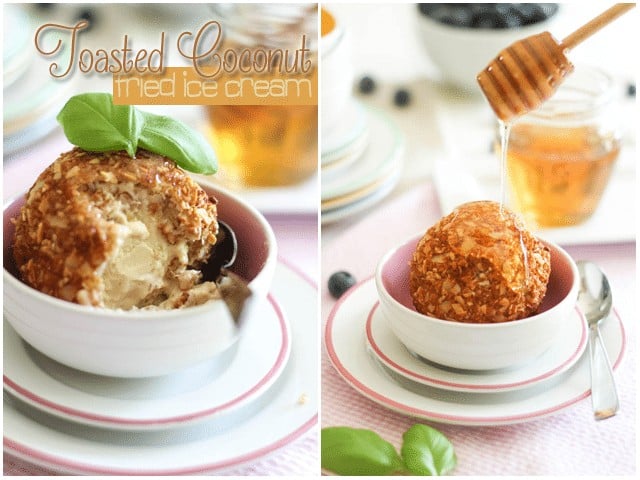 Initially, I was supposed to be Whole30ing only for the month of July, so I figured I would hold on to the recipe until my efforts had ended. You see, I wanted to post nothing but Whole30® compliant recipes for the entire duration of my challenge.

But then, as it was finally nearing its end, I sort of got talked into joining a bunch of people who were doing the official August Whole30® Challenge, so I decided to extend my  squeaky clean eating habits for another full month.

And I do mean another FULL month.

And as luck would have it, both July AND August have 31 days to them, which means I ended up stretching my adventure to a total of 62 days. 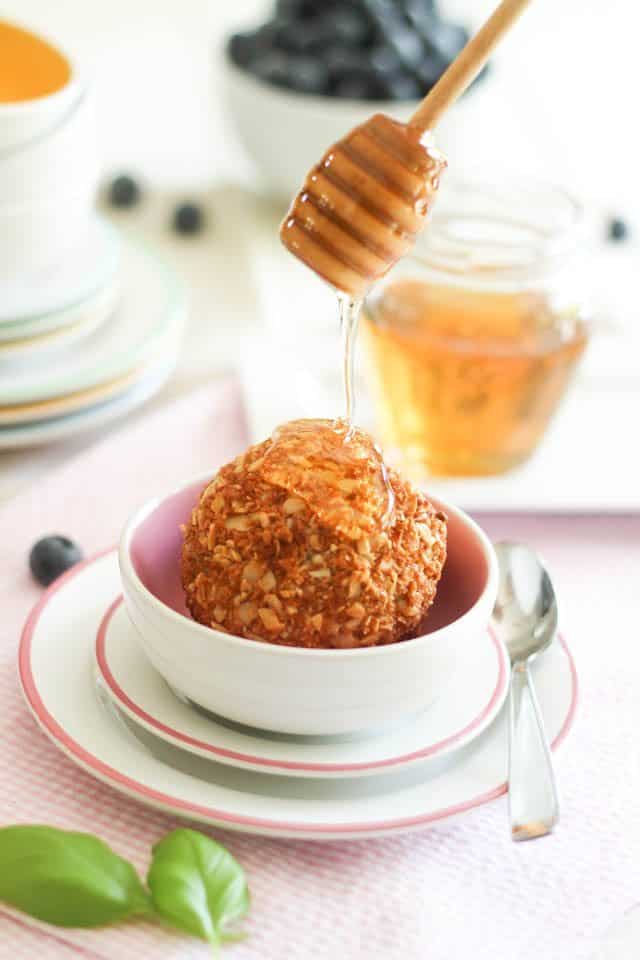 Trust me, though, this wasn’t long enough a period of time to have me forget just how tasty and truly decadent this dessert was!

And the good thing is, since I haven’t been able to eat any for the past 2 months, I still have a few balls left in the freezer that are all ready to go and demand nothing more than to be plunged into a bath of hot oil and drizzled with beautiful, thick and sweet honey.

That’s one of the best things about this dessert, I find.

Initially, I have to admit that it’s fairly time consuming and labor intensive: you need to make the custard, let it rest for a full day, then churn the ice cream, turn it into individual balls, let those freeze solid then give them a perfectly round shape, freeze them again, coat them in frothy egg whites and shredded coconut and return to the freezer once again.

Once you get to this point, though, you can keep the balls in the freezer for an extended period of time, until you get a craving for a decadent treat or have a few guests to impress. Then it only takes minutes to get this luscious dessert from freezer to fryer to table. 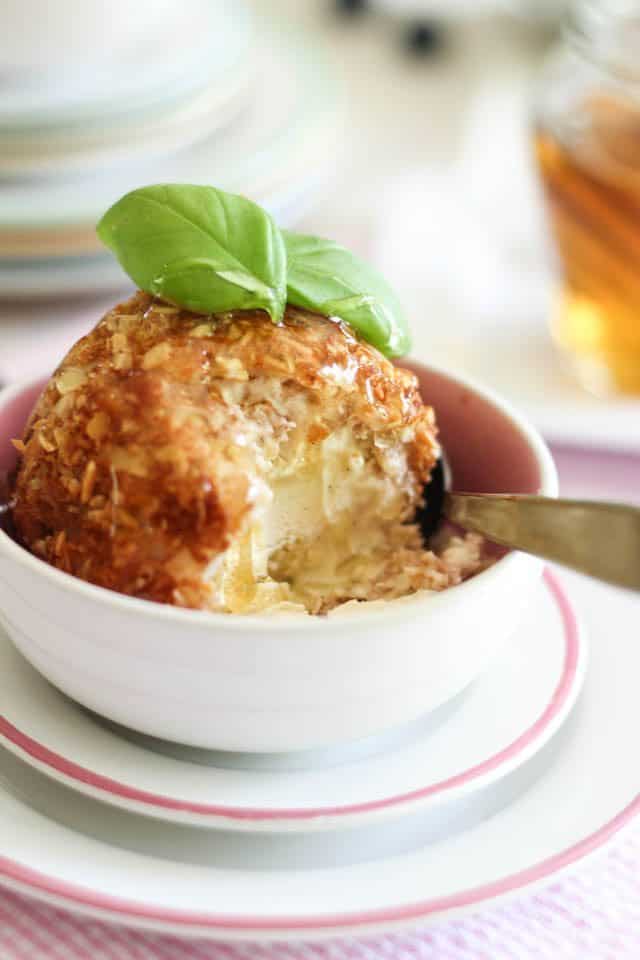 If you’ve never had fried ice cream before, trust me, you really, really have to give it a try. The sooner the better.

Something definitely has to be said for ooey, gooey, soft, creamy, velvety smooth ICY COLD ice cream all trapped inside this very warm, intensely crispy and crunchy exterior.

It’s a contrast in textures and temperatures that simply cannot be matched. 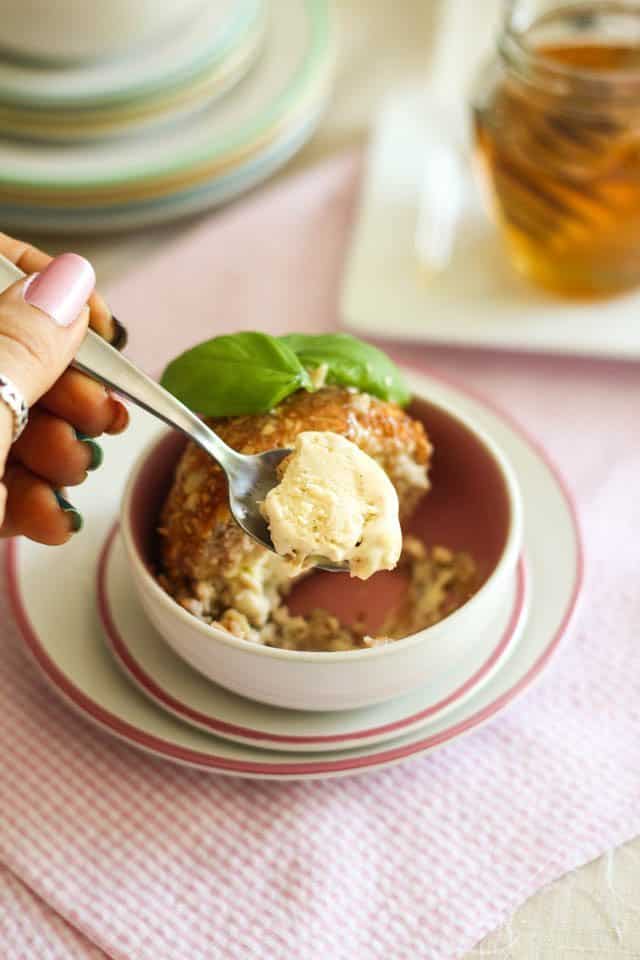 But of course, no one says that you absolutely have to fry the ice cream, you know.

You could very well serve this in its “unfried” state. Just make sure you take the balls out of the freezer about 10-15 minutes before serving to give them a chance to soften up a bit.

Or, you could even skip the coating altogether and serve it in its “naked” state.

If you’re gonna do that, though, I recommend placing the freshly churned ice cream in the freezer to let it harden just a tad and serve it within a maximum of 4 hours of churning. Otherwise, it’ll get too hard and you won’t be able to scoop it.

Whichever way you choose to serve this, I’m sure this creamy, velvety Toasted Coconut Ice Cream will not disappoint. 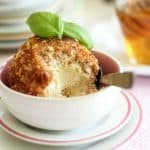 For the base Coconut Ice Cream

To make the fried ice cream 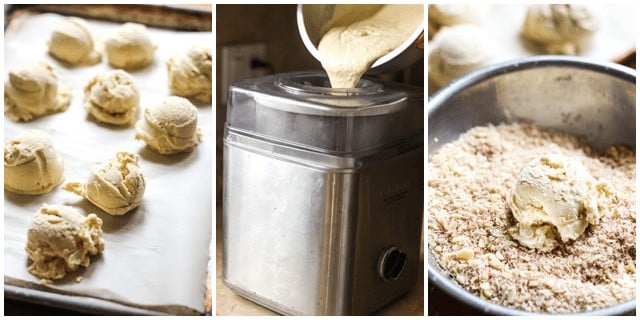 Custard goes into the churner, after resting for 24 hours in the refrigerator. As you can see, it’s already fairly thick at this point.

After churning, scoop your ice cream into individual balls and put them in the freezer until frozen solid.

Shape your ice cream balls into perfect spheres by coating them with the coconut almond mixture and pressing them with your hands, much as you would a snowball. 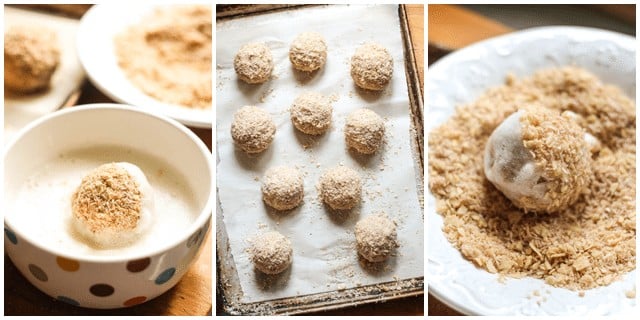 Give the ice cream a second coating by dredging them in frothy egg whites and rolling them once more in the shredded coconut and almonds mixture.

At this point, you will want to freeze the ice cream balls until frozen real solid, or until ready to serve.

Or until craving strikes! 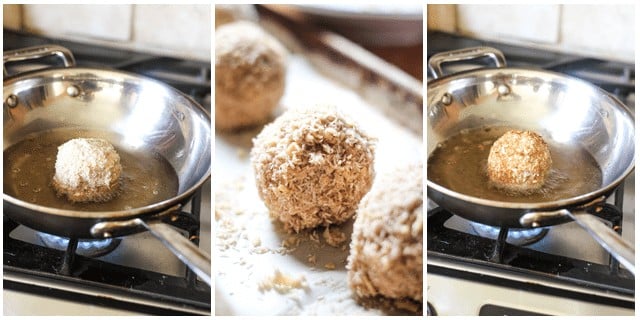 If only frying a couple of ice cream balls at a time, you won’t be requiring much coconut oil at all.

Just make sure that you rotate your balls often so they get nice and golden on all sides.

And don’t worry about the ice cream leaking out. If you have frozen the balls nice and good, none of that will happen… 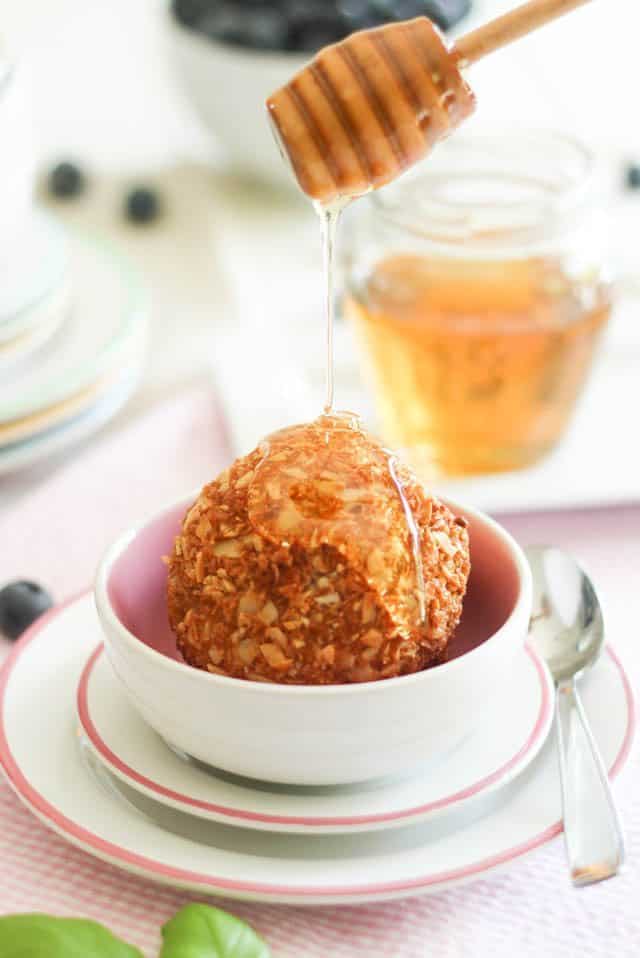 As is this wasn’t pretty enough already, drizzle with a little bit of honey for extra decadency… 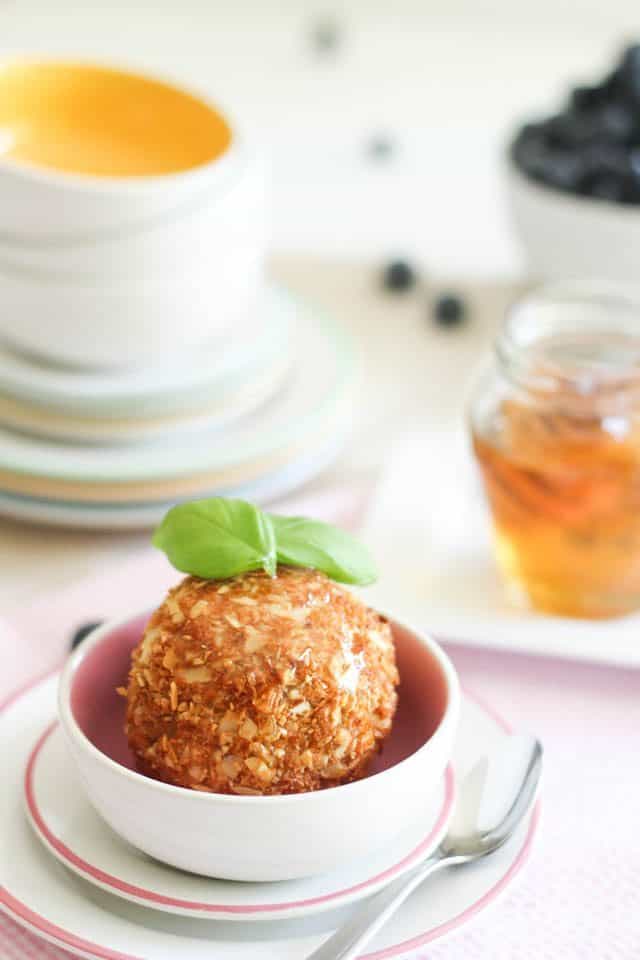 Garnish with mint leaves, or even fresh basil leaves, why not? 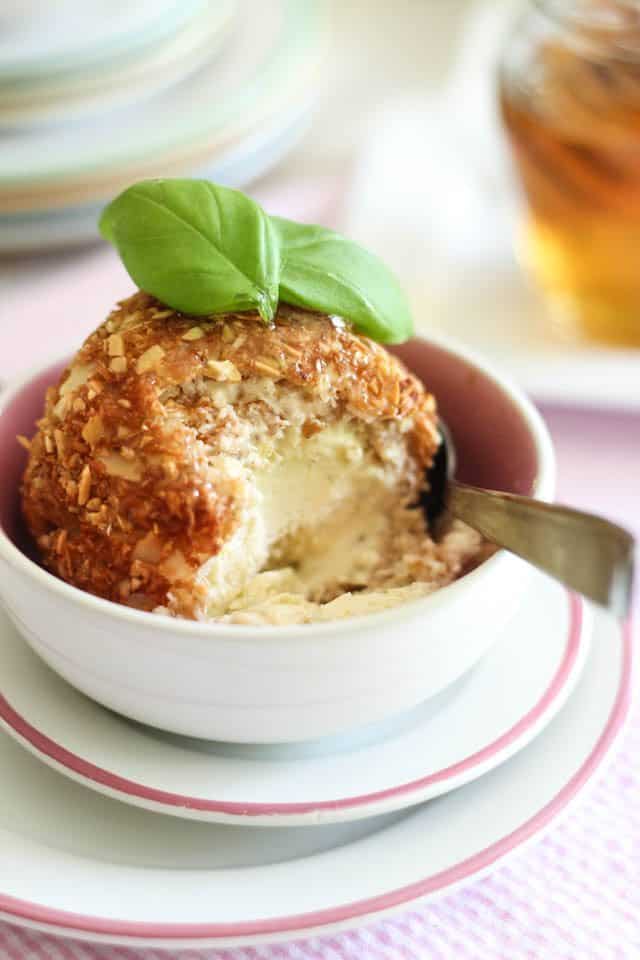 Dig right in and prepare to be blown away!

posted by Sonia! The Healthy Foodie on September 1, 2013