If I had to name one thing that I do like about the Keto diet, it would have to be coming up with fat bomb recipes such as this Almond Pistachio Fudge.

I must admit that fat bombs are a fun and tasty way to boost one’s daily fat intake.

Still, the principle doesn’t sit all that well with me. I just don’t find it natural, that’s all. I mean, it’s good as a temporary measure, but in my mind’s eye, there is something wrong with the mere fact that I have to incorporate these into my daily feeds in order to reach my dietary goals. These kinds of things should be considered a treat, not regular food.

Yet, I can’t think of any other decent way to boost my daily fat intake. AH! Maybe it’s just that I don’t have enough imagination as to how to use fat efficiently any other way, yet. Or maybe it’s just the pastry chef in me who always wants to shine through and have her (LOUD) voice heard. 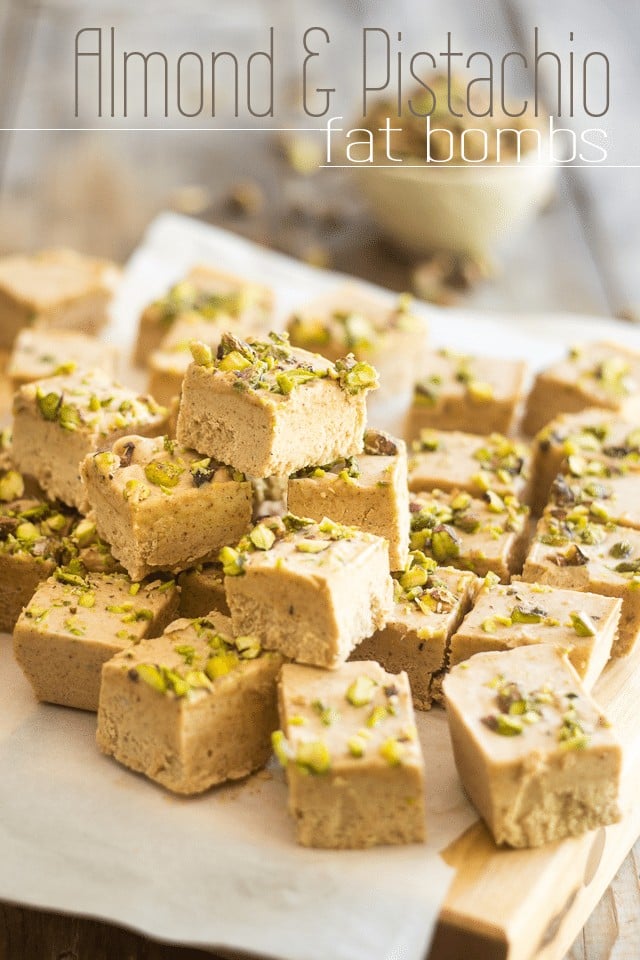 One of the aspects of the paleo lifestyle that I appreciate the most is that you are expected to feed as close as possible to what nature intended.

I might be way out of whack here, but I’m pretty sure that if nature had intended for me to eat so much fat, animals would tend to carry a much higher fat to muscle ratio, and there would also be a hell of a lot more carb-free, healthy fat options for me to choose from out there!

Also too, the more I eat according the the guidelines of the paleo diet, the more I feel like eating REAL food. I find myself craving less and less baked goods, namely bread, muffins, cakes and pies of all sorts. Sweets and desserts don’t appeal to me quite as much anymore.

Mind you, I probably have keto to thank for that also, as I now eat close to no sugar at all and don’t really crave it either, not even when I eat “trigger” foods such as this deliciously creamy fudge, aka fat bomb.

Since I completely and utterly refuse to put any artificial sweetener in my body, it goes without saying that while following a keto diet, anything sweet is just totally and completely off limits for me. Nowadays, just thinking about sugar gives me the jitters!

So once again, just as was the case with the Matcha and Coconut Fat Bombs, and Choconut Almond Butter Cups that I recently posted, this new variety of fat bomb that I just came up with is completely unsweetened. It’s just sweet enough for my taste, however!

Of course, if you think you may prefer your fudge a bit more on the sugary side, you could add a little bit of your favorite sweetener to it. Of the ones that I use regularly, I think raw honey would be the best fit for this.

You would need to add your sweetener right at the beginning, together with the smooth coconut butter, firm coconut oil, chilled coconut milk, ghee and roasted almond butter. If using raw honey, I think that a quarter of a cup would be a good amount.

Also throw in the chai spice, vanilla and almond extract and pinch of salt at this point.

Note that it’s fairly important for your coconut oil be on the firm side, so send it to the fridge for a little bit if you have to. Same goes for that coconut milk. It’s not necessary that you use only the cream part (although you could very well do that if you wanted to, more fat for you), but your milk does have to be firm when you use it, so do make sure you send it for an overnight trip to the fridge.

Or better yet, make it a habit to keep a can in the fridge at all times… 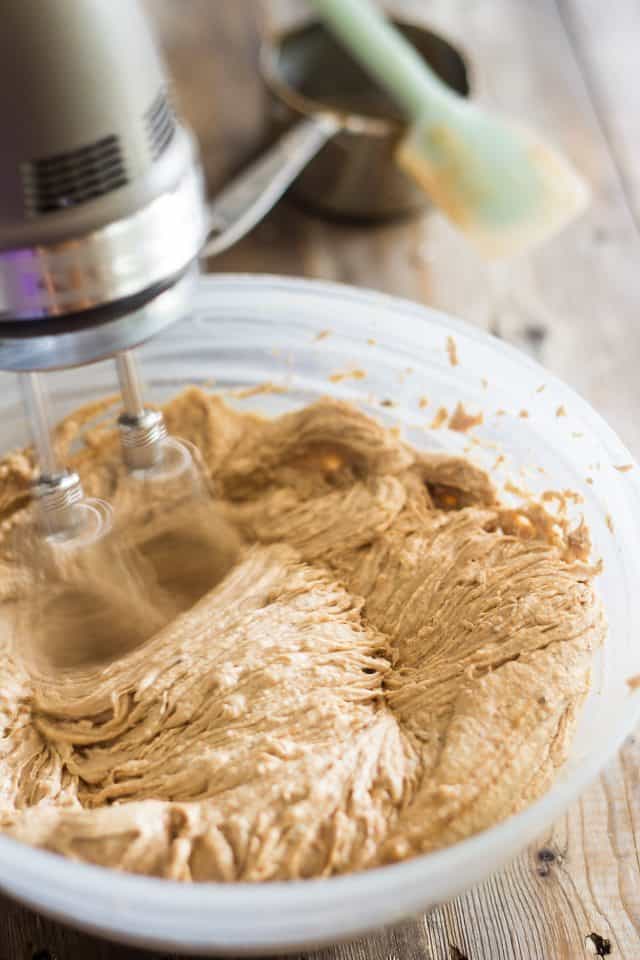 Mix all these yummy ingredients with a hand mixer, starting on low speed and progressively moving to a higher speed until all the ingredients are well combined and the mixture becomes light and fluffy. 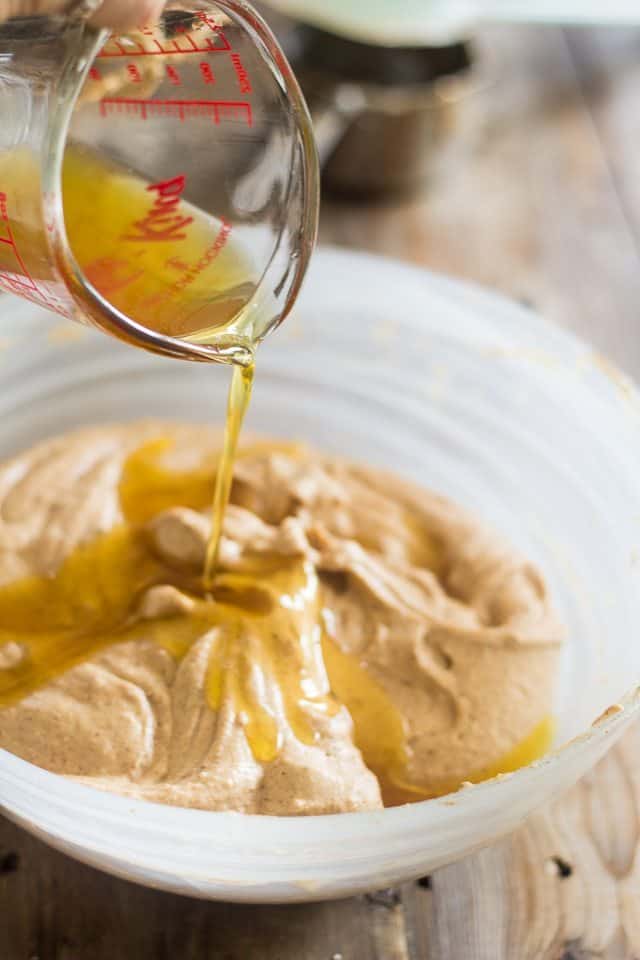 Now we need some melted cacao butter. You could either do it in a small saucepan set over low heat or place it in the microwave for a couple of minutes on high. Whatever method you decide to use, make sure you stir your cacao butter well and often.

Once completely melted, pour that cacao butter right into the almond mixture. 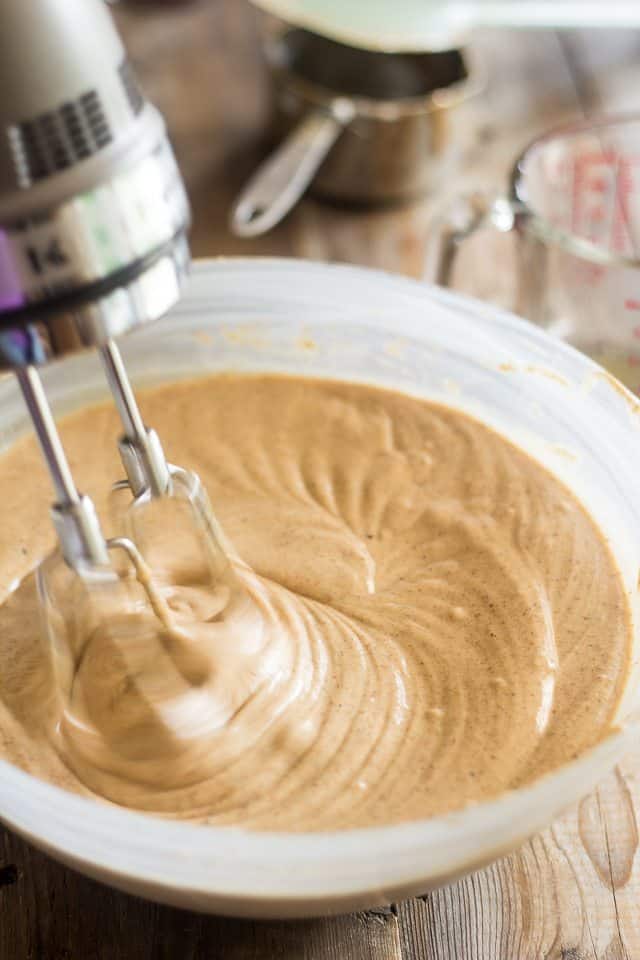 Resume mixing immediately, on low speed this time, until the cacao butter is completely incorporated. 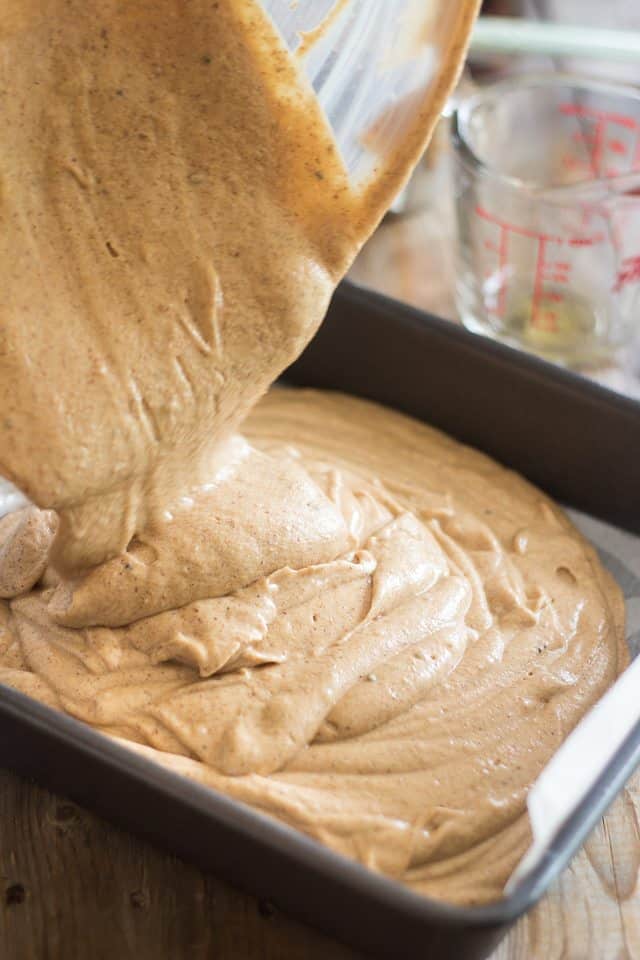 Transfer your fudge-in-the-making to a  9” square baking pan  that’s been well greased and lined with parchment paper. For easy unmolding, make sure to leave a little bit of an overhang on either side of the pan. 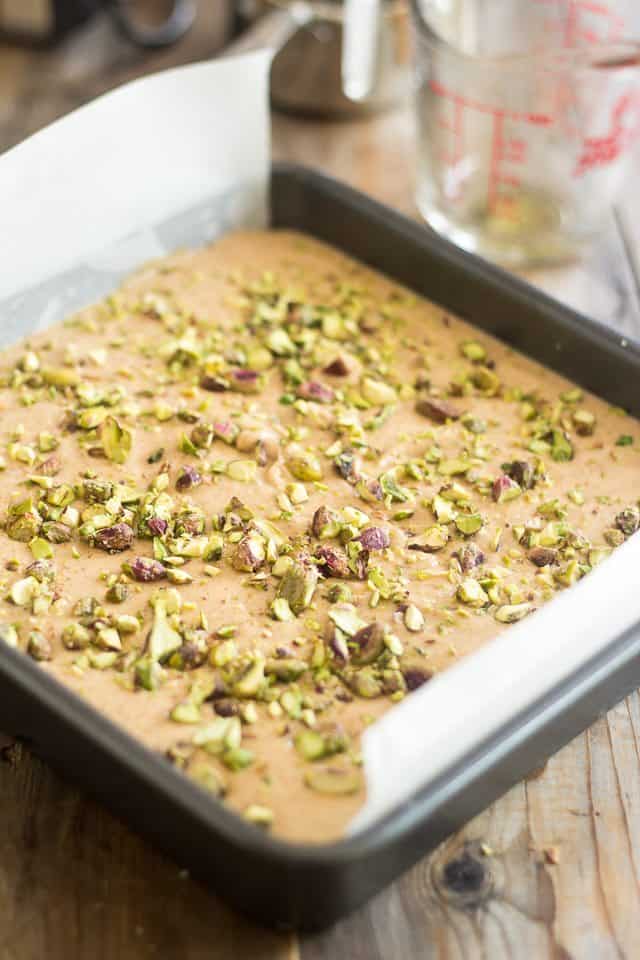 Spread your almond fudge as evenly as possible and sprinkle generously with chopped pistachios. 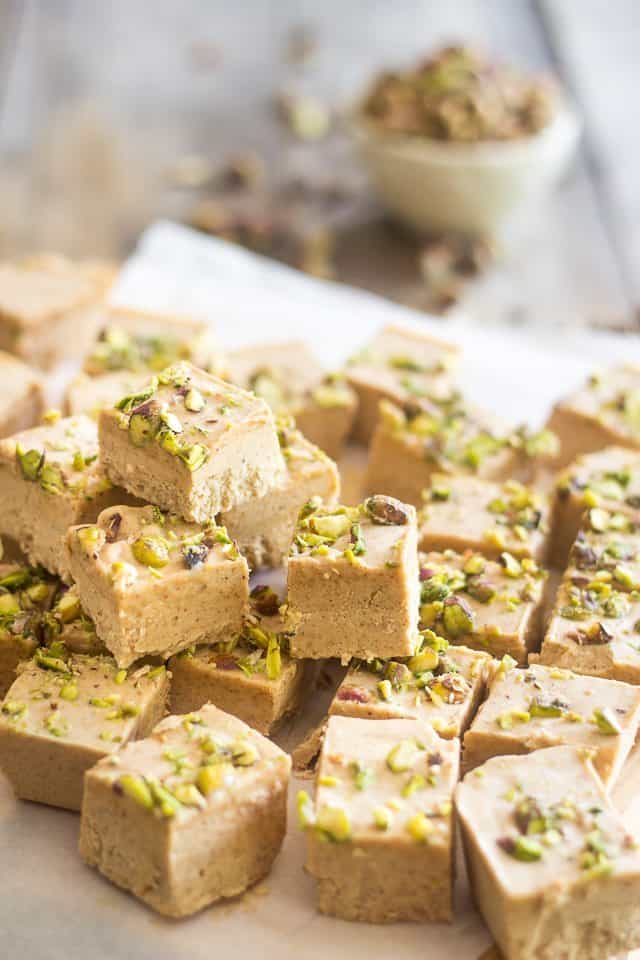 Refrigerate until completely set, at least 4 hours but preferably overnight.

Cut into 36 squares and splurge!

See how creamy this is? It’ll melt at the contact of your fingers in a matter of seconds…

Now imagine what it does when it hits your tongue! Hmmmmm, sweet and velvety deliciousness is what this is.

Even without the sugar… 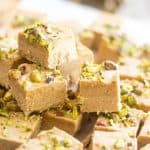 *Note that it's fairly important that your coconut oil be on the firm side so send it to the fridge for a little bit if you have to. Same goes for that coconut milk. While you don’t need to use the cream part exclusively (although you could very well do that if you wanted to, more fat for you), your milk does have to be firm when you use it, so give that can a good shake and send it for an overnight trip to the fridge.
Author: Sonia! The Healthy Foodie 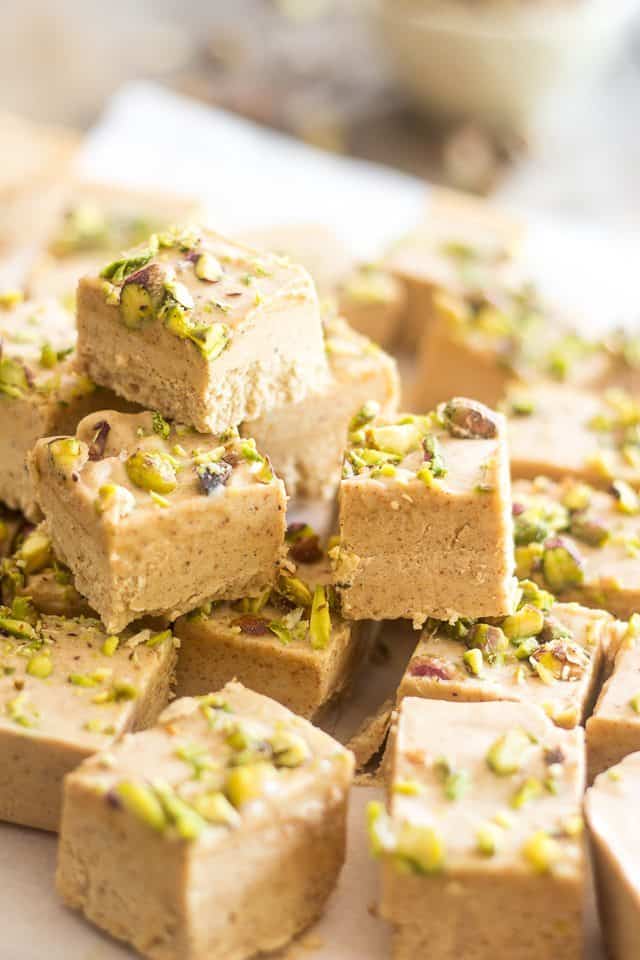