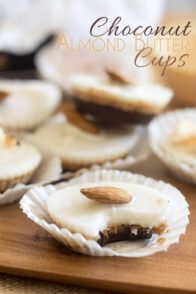 Before you get overly excited and start drooling all over the place at the thought of enjoying a decadent sweet treat, I feel I must warn you right off the bat: these delicious Chocolate Almond Butter Cups aren’t sweet at all.

Not even one tiny bit.

Hey, that doesn’t mean they’re not heavenly good, though. Only when you bite into one of these, you don’t get a crazy intense sugar rush that goes straight to your brain and hormones. Instead, you get to taste and REALLY appreciate the natural bitterness of the chocolate, the ever so subtle sweetness of the almond butter and the creamy, luscious richness of the coconut butter.

All that without even getting the slightest little buzz! 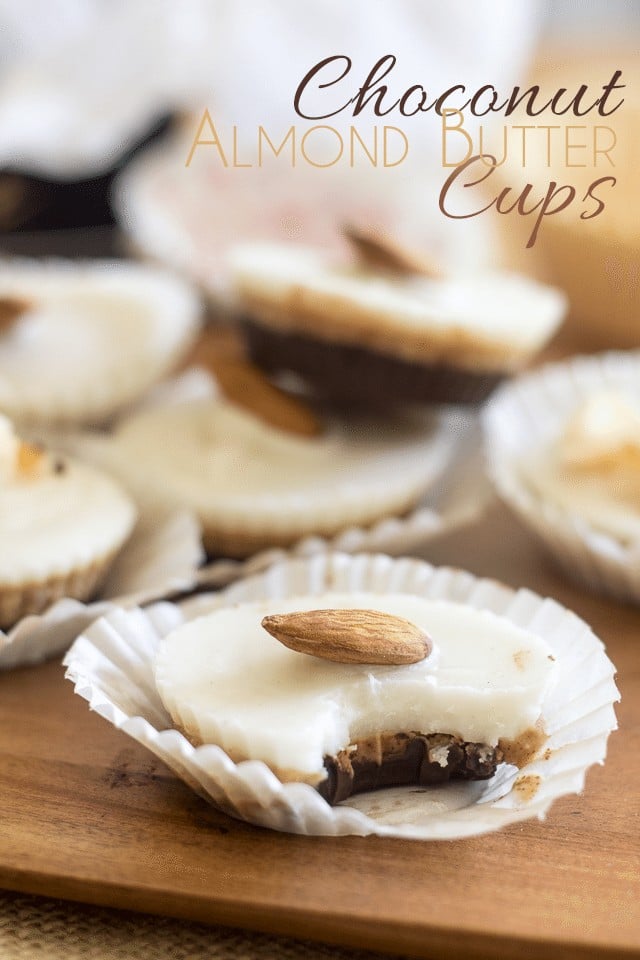 I chose not to add any sugar to these because, since I’m currently following a keto diet, I needed a fun and tasty way to boost my fat intake without breaking my carb bank. And I don’t do artificial sweeteners such as Erythritol or Xylitol or any of that stuff that ends in OL. I’d rather keep my food clean, thank you very much!

Instead, what I chose to do is add a little bit of cinnamon and a few drops of pure almond extract to help create an illusion of sweetness… but the illusion is rather faint, take my word for it!

Needless to say these fat bombs really are for the trained palate and for the real dark chocolate lover. However, if you want to make them and feel you really must sweeten them, I suppose you could add as much as one tablespoon of raw honey per layer without affecting the final consistency too much. As well, you could use good quality 70% dark chocolate instead of chocolate paste. They still won’t be super sweet but at least they will have some kind of a hint of sweetness to them.

But if you too have been following a keto diet and are a bit tired of eating mayo by the spoonful, these babies might very well have your name on it! 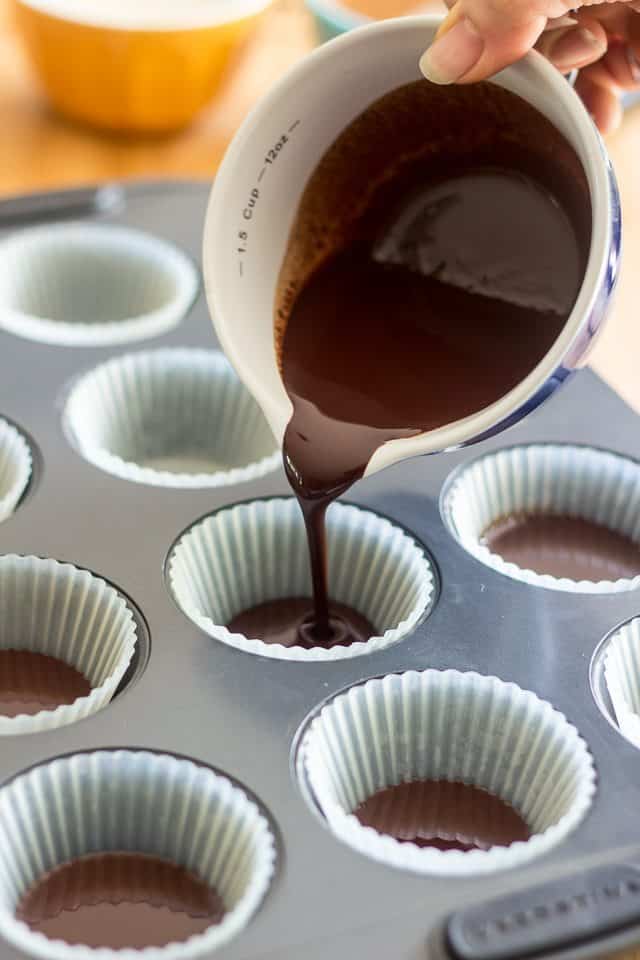 They are surprisingly easy to make, too.

For starters, you’ll need some muffin cups. I strongly recommend that you use either the parchment paper variety, or even better yet, invest in silicone cups. These guys just can’t be beat, especially when dealing with projects such as this one. Nothing ever sticks to them, you can put them in the dishwasher, and better yet, they’re so sturdy you don’t really even have to place them in a muffin pan. They hold their shape perfectly well on their own. This means perfectly shaped muffins, or chocolate cups!

Once your cups are ready to go, you need to melt some chocolate paste, add some melted coconut oil to it as well as a hint of cinnamon and almond extract, then divide that equally between the cups. Send that to the fridge to set while you work on the next layer. 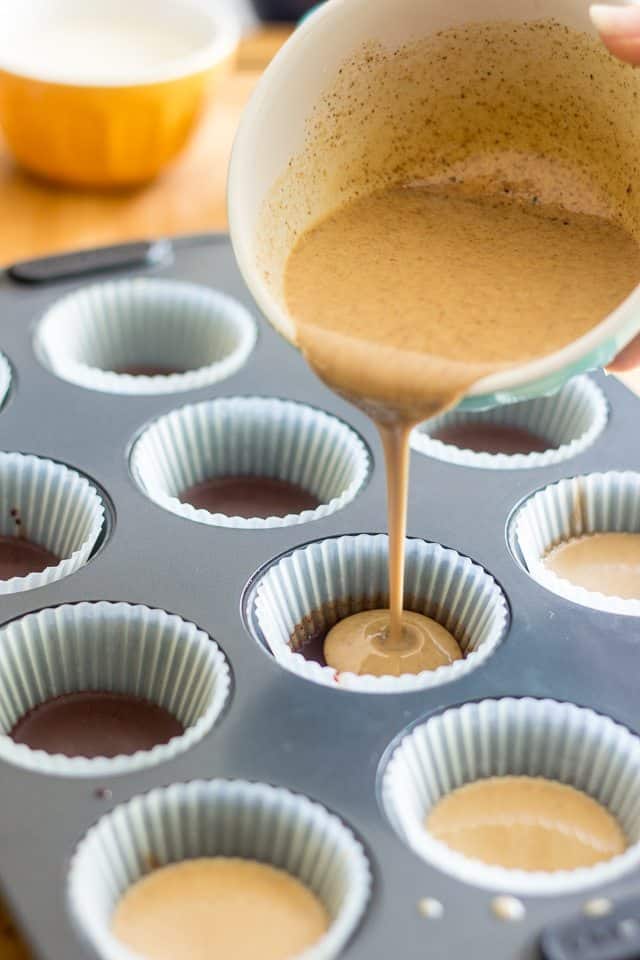 For the second layer, add your all natural almond butter (or any other all natural nut butter that you like or happen to have on hand), ground cinnamon and more melted coconut oil.

Stir to combine, then pour that heavenly mixture over the set chocolate. Send the cups back to the fridge until that new layer has set, about 5 to 10 minutes. 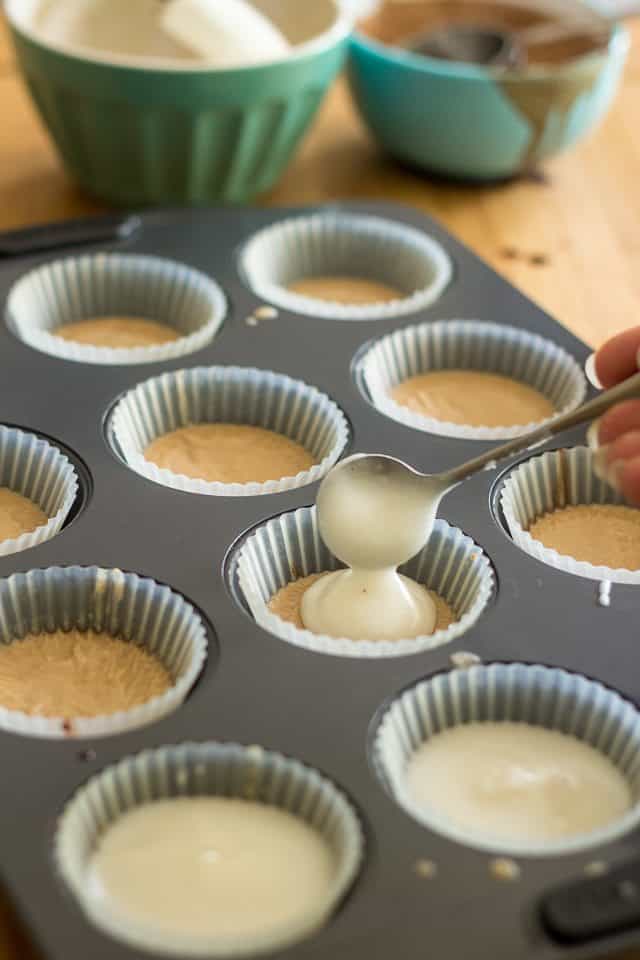 While the cups are busy firmin’ up, mix 1/2 cup of creamy coconut butter with 1/4 cup of melted coconut oil in and stir until well incorporated.

Delicately spoon that mixture over the almond butter layer. 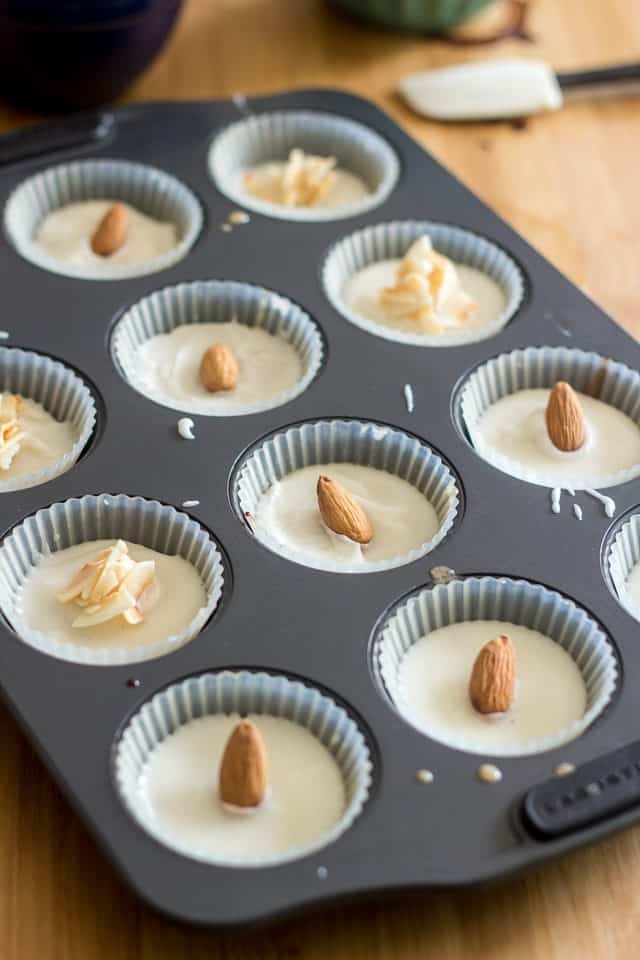 Garnish each choconut cup with a whole raw almond or a pinch of toasted coconut flakes, then send back to the refrigerator to finish setting, at least an hour. 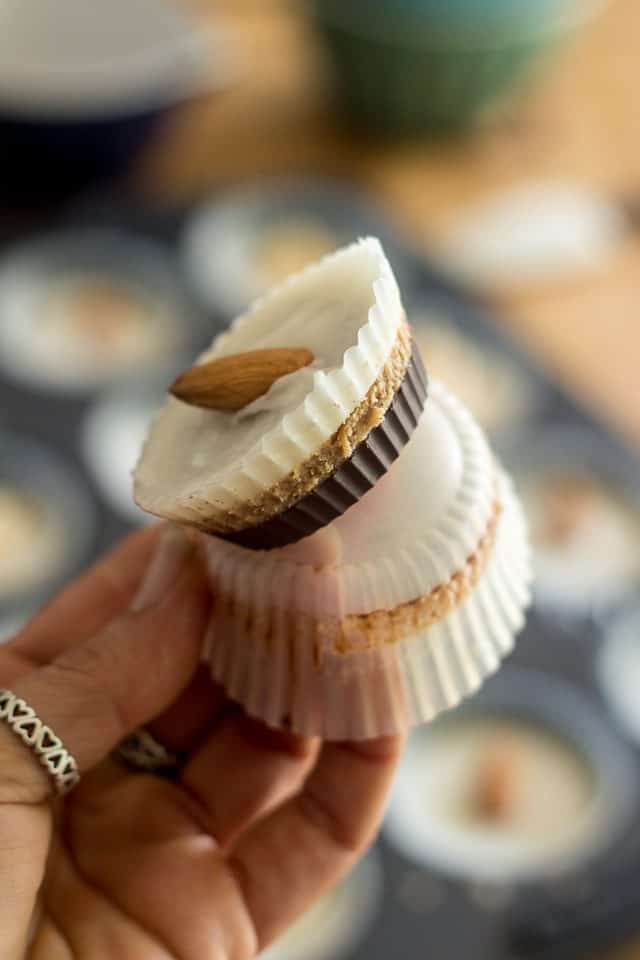 See how perfectly well shaped these get when you use the silicone cups? Plus, they come out of there so easily, too. Did I say they were totally worth the investment? Totally! 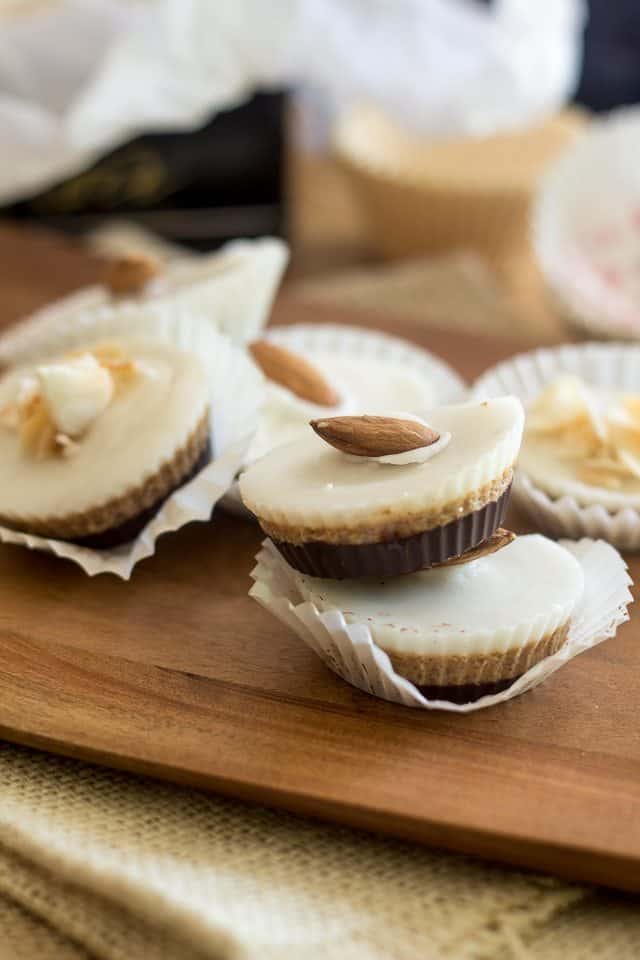 Let me tell you, these babies play the role for which they were created to the absolute perfection! I even sometimes wish that I could afford to eat more than one a day…

Honestly, once you get used to not eating sugar, these taste like a genuine treat, I swear! 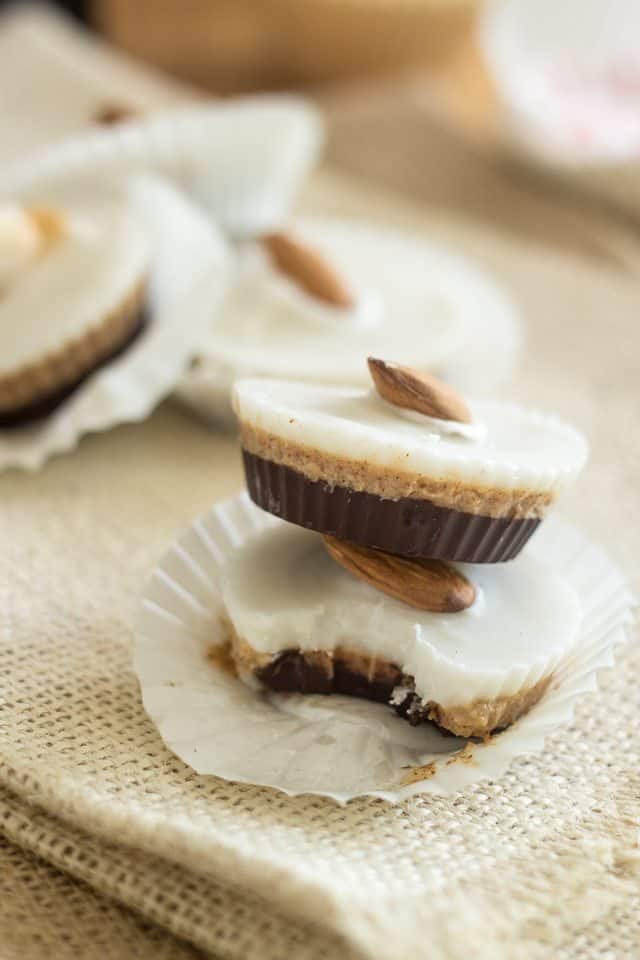 Since I’m planning on giving this keto thing at least 12 weeks, I guess you can expect to see few more similar “fat bomb” recipes on here within the next few weeks…

I’ve already got a recipe for Matcha Coconut Fat Bombs in the pipe, and I’m working on a yummy Matcha and Pistachio Keto Ice Cream (very high in fat but sugar and dairy free, of course). Hopefully it’ll turn out great so I can share the recipe with you all! 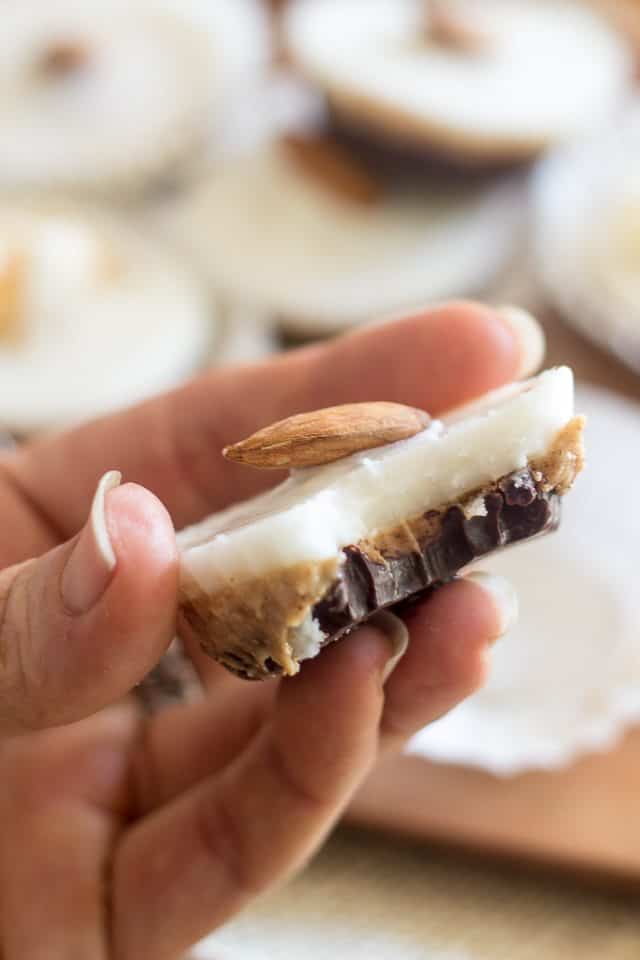 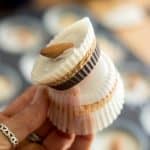 *For a sweeter "treat", use good quality 70% dark chocolate instead.