Some of you might remember that I suffered a knee injury back in February and as a result, was forced to take a break from training for a couple of weeks. I never really talked about it much, because it really bums me out and I’m kind of living in denial, but it turns out I tore a meniscus and will most probably require an operation. How friggin’ awesome is that? NOT!

While my doctor didn’t see any contraindication to my training and lifting weights while I’m waiting (for up to 9 months) for my MRI and eventual operation, my knee had gotten really stiff and my leg was extremely swollen lately so my coach strongly suggested that I give it a good, long rest so it may have a chance at getting better.

GAH! As much as I hate to admit it, the man was right.

Sooooo, since I’m currently not training, i.e. not expending nearly as much energy, I’ve decided to give this keto thing another go. I can’t say that things are going all that well, though.

What exactly is Ketosis?

For those of you not familiar with ketosis, it is a state in which your body runs primarily on fat for fuel, as opposed to glucose. In order to induce and maintain it, one must consume no more than 50g net carbs per day (which is total carb count minus dietary fiber) and protein intake must also be kept in check as 54% of protein is anti-ketogenic, which means it will be converted into glucose before it enters the bloodstream.

That said, keto and I just don’t see eye to eye. Heck, I don’t even know if I consider it to be healthy… cutting back on carbs so drastically, eating protein only in moderation and basically living off fat… I don’t know. There’s something about this whole concept that just doesn’t sit well with me. Plus, fat is such a boring thing to eat. Gimme meat, gimme veggies and tons of ’em, gimme nuts, gimme fruits, gimme stuff that tastes good! But fat? I mean seriously, you expect me to add coconut oil and butter to my coffee? I think not. Bulletproof coffee makes me gag, literally. I just can’t do it. 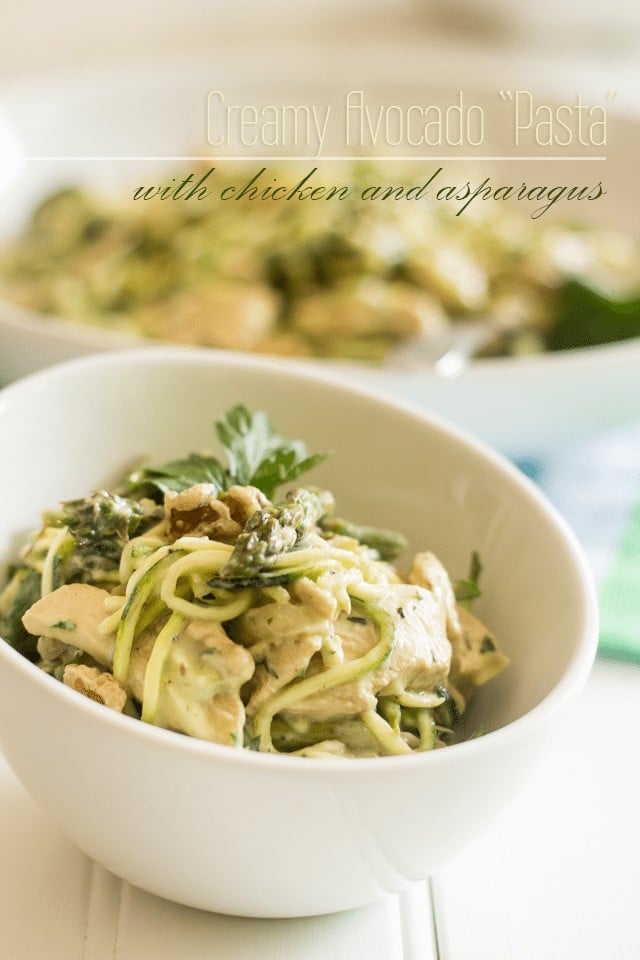 Mind you, I remember a time when I used to think that the paleo lifestyle was nothing short of crazy. I mean, eating all that meat, fat and bacon couldn’t possibly be healthy now could it? I had to actually follow it for a full month to realize that there was way more to it than just eating tons of meat and decide to give it a real go. But even then, I would still be eating egg white omelettes and stick to the leaner cuts of meat. I would say it took at least 6 months before I finally adapted and felt comfortable eating all kinds of meat and healthy fats.

Maybe it’s the same thing with this keto thing. Maybe I haven’t figured out the right things to eat yet. For now, I feel I have to cut back WAY too much on vegetables in order to just stay below the 50g net carb mark. Don’t ask me to go any lower than that, I don’t think I could do it. I might not be in a deep state of ketosis, but at least my body is producing ketones, which apparently is all you need to reap the full benefits of the diet. And yes, I’ll stick to the term diet here, because frankly, I think of a lifestyle as something that one could sustain long-term and I know that ketosis, I could not do for a very long time. I could probably keep at it for a couple of months, at most, to help my body become fat adapted, but no more.

Alright, enough about my stupid busted knee and my decision to go keto for a while. I think it’s about time we got on with the eats around here.

As you probably guessed, today’s fare is going to be pretty low in carbs. In fact, I’ve revisited my Creamy Avocado Pasta, one of my favorite pasta dishes from my not so distant past. I’d really been craving that one lately… and even dreamed about it, seriously.

Of course, I made a few modifications… first, the dairy had to go, and the pasta, well, had to be replaced. 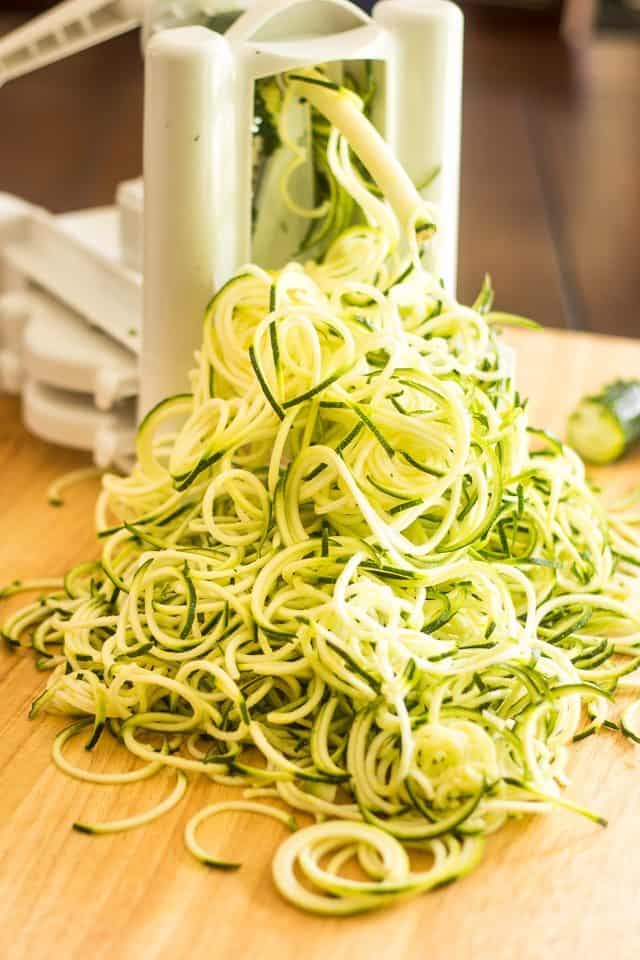 Unquestionably, zucchini was the perfect substitute. In fact, I’d even say that it did a much better job at being a noodle than the original soba noodles had done.

So, the first thing we need to do is spiralize the zucchinis and then reserve them to a large, and I do mean large, mixing bowl.

Now if you don’t own a spiralizer yet, I strongly suggest that you get one ASAP! They are fairly inexpensive and allow you to make “pasta” out of all kinds of vegetables. It’s just the coolest kitchen gadget ever. You’ll have so much fun spiralizing everything in sight when you initially get it, that much alone is totally worth the investment.

But I’m pretty sure that it’ll also become one of your best allies in the kitchen, even after the initial excitement is long gone. 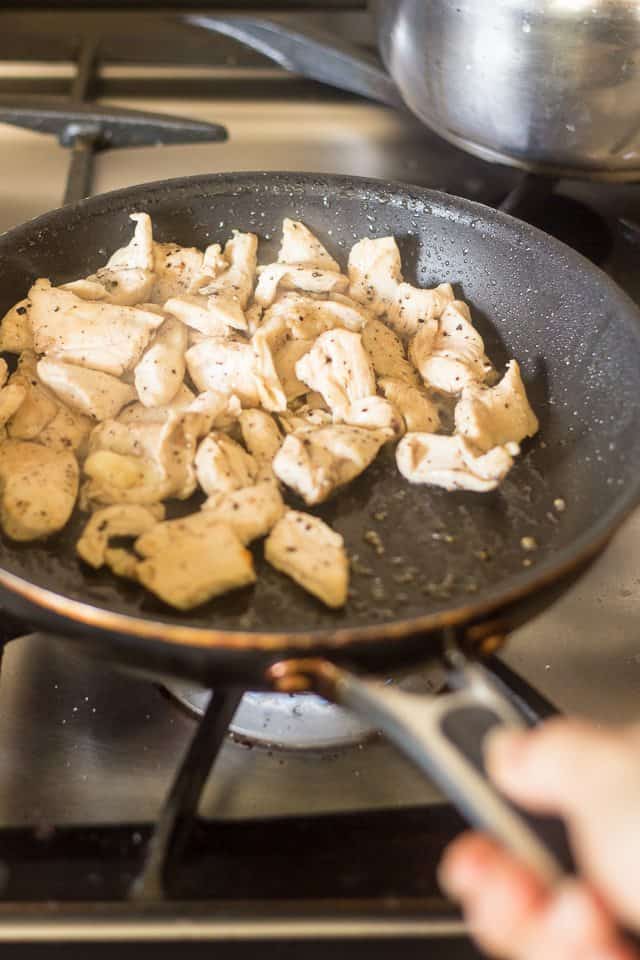 Now that your zucchini has been transformed into noodles, it’s time to work on the chicken.

First cut it into tiny strips, then sauté it quickly in a medium sized skillet set over medium-high heat until cooked trough. This shouldn’t take much more than five minutes. 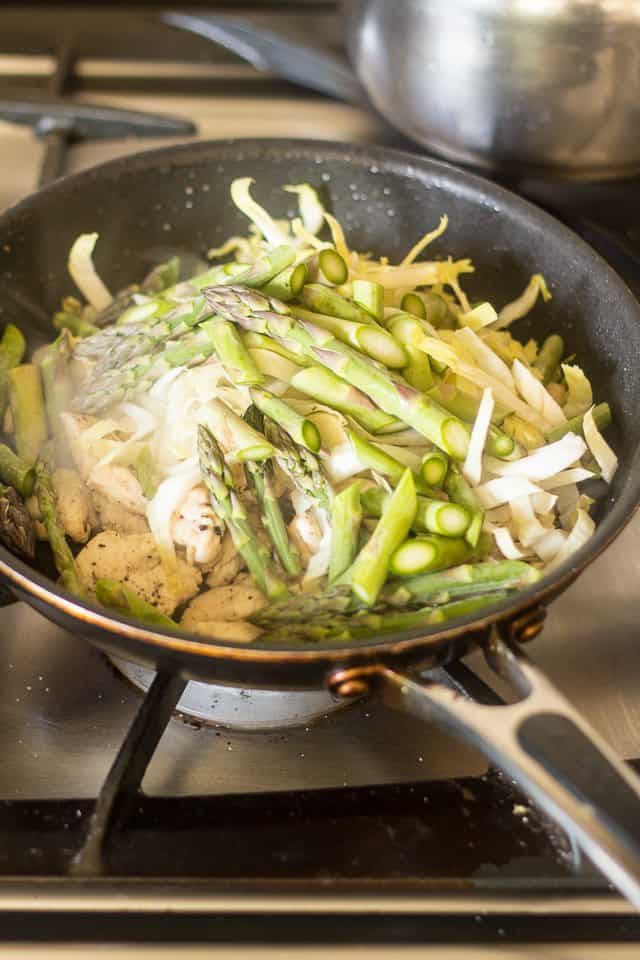 When your chicken is fully cooked, throw in your vegetables and continue cooking for 3 minutes or so, until they become nice and soft.

Also, while this is happening, make the avocado sauce by processing all the ingredients in a small food processor until creamy. This will only take seconds! 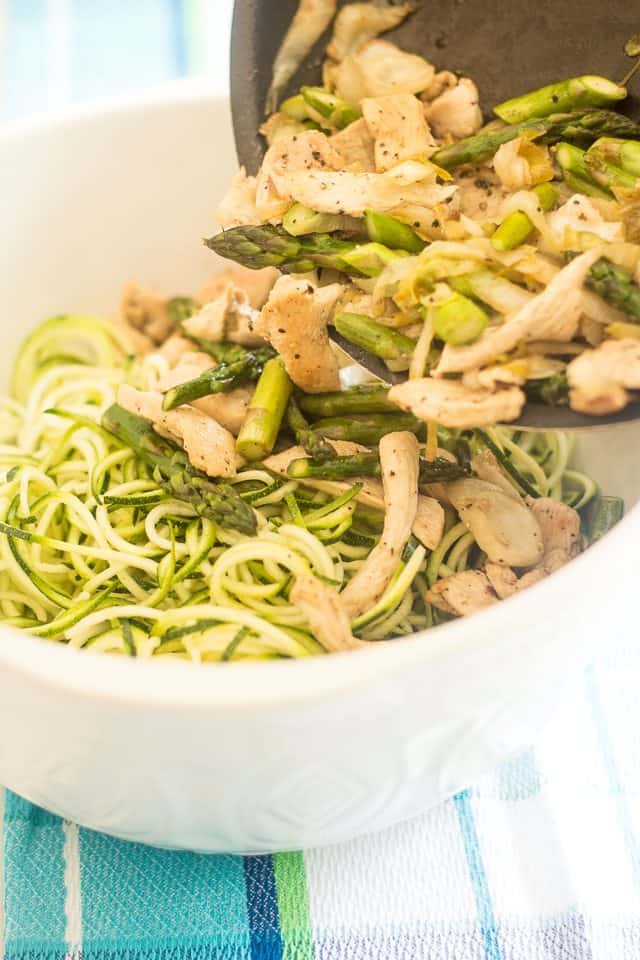 As soon as your chicken and vegetables are ready, add them to the bowl with your spiralized zucchini. The heat from that alone will be enough to cook and soften the noodles. 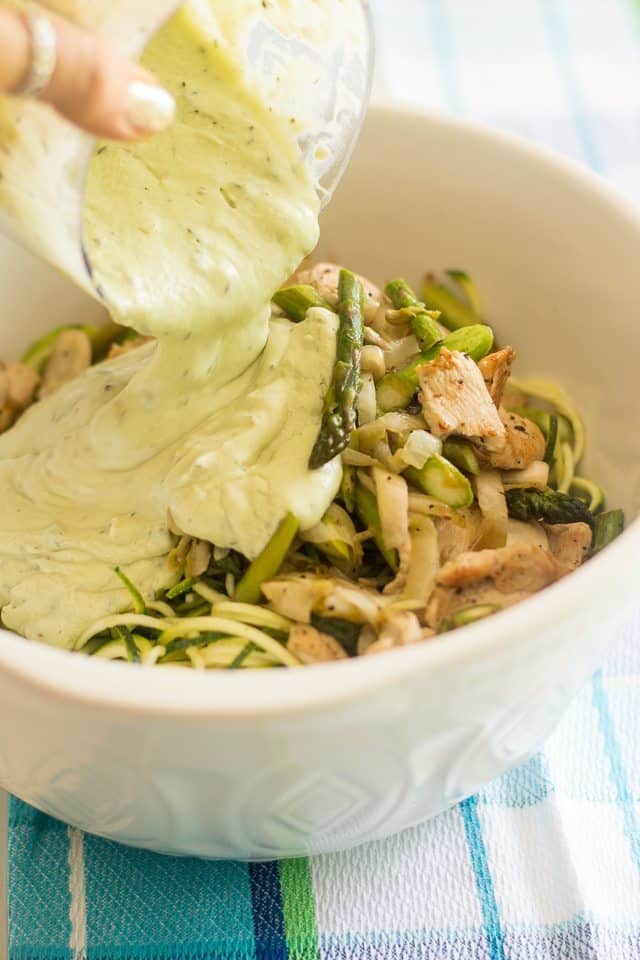 Top with the creamy avocado sauce and give everything a good but delicate stir. 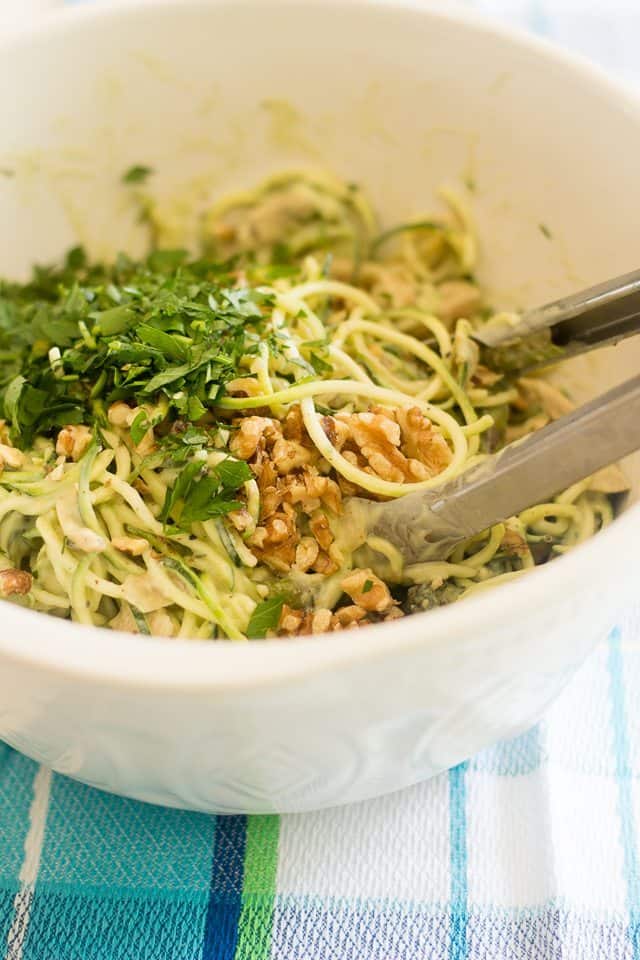 Lastly, stir in the chopped walnuts and fresh parsley. 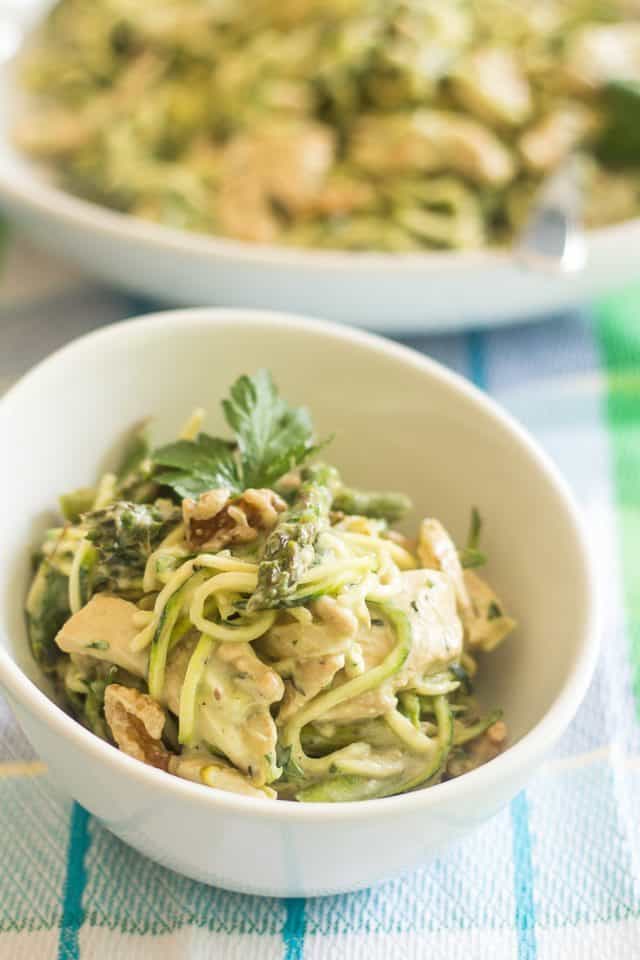 And that’s it. You are ready to serve!

See how soft and pliable that zucchini is? Zucchini is do delicate, it really doesn’t need much heat at all in order to wilt. 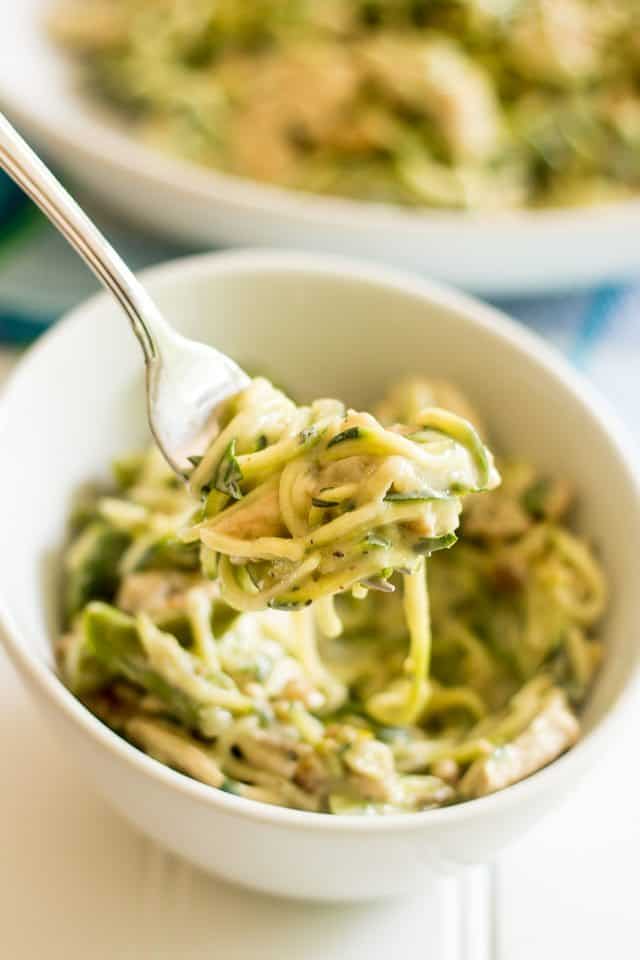 I feel I must warn you, however, that this will not be super hot since both the creamy avocado sauce and the zucchini noodles are cold to start with. If you want your dish to be on the warmer side, you could always heat it up in a skillet set over medium heat, but this will cause your zukes to become much softer and render more water, so your sauce will be a little thinner.

Try both versions, see which one you like best… 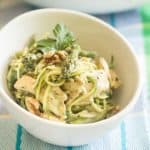 For the creamy avocado sauce 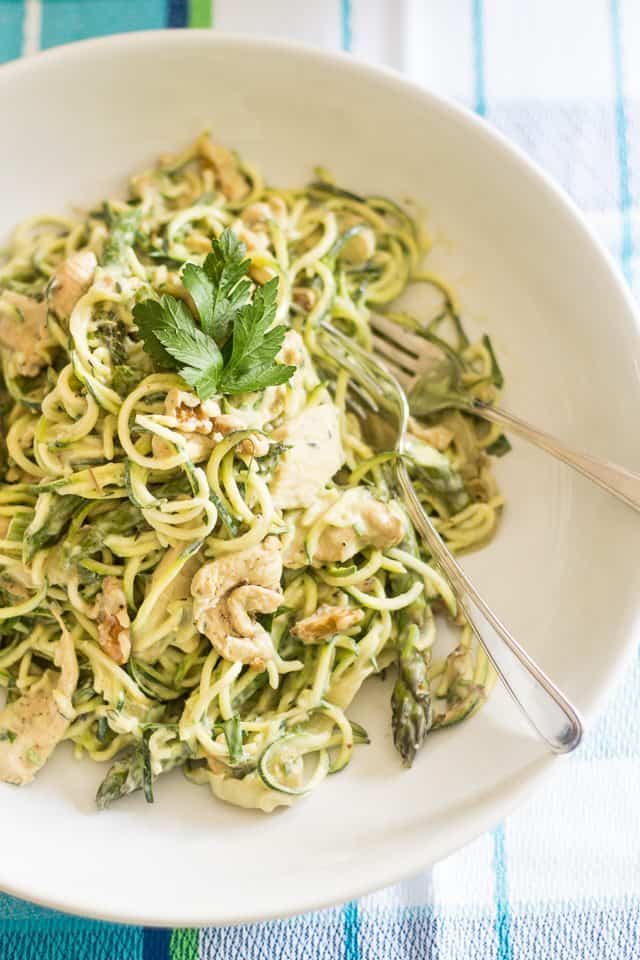 47 Comments on “Creamy Avocado “Pasta” with Chicken and Asparagus”