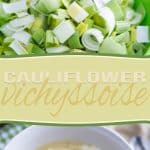 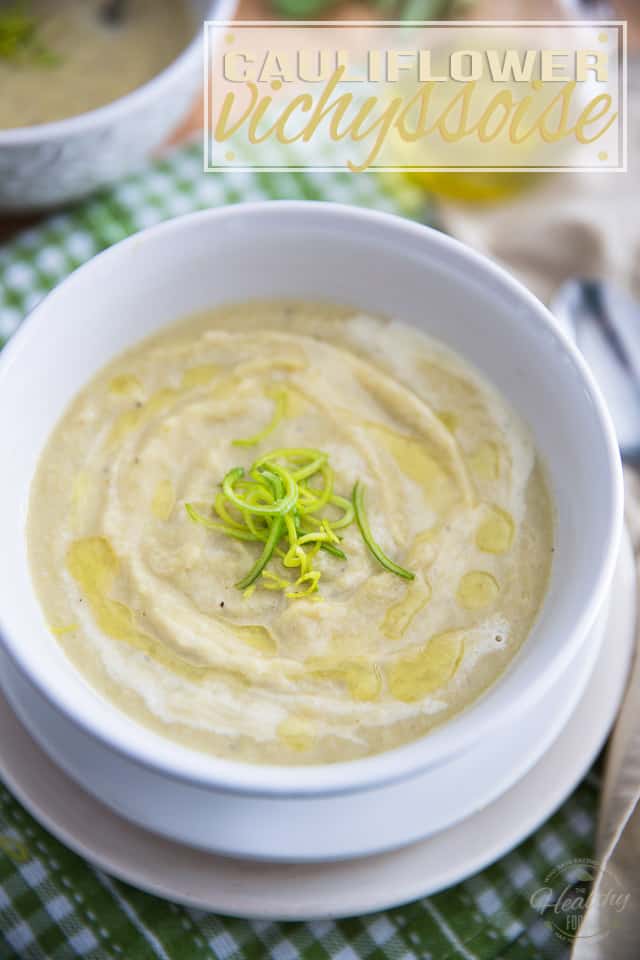 Oddly enough, when I was a kid, Vichyssoise was my favorite kind of soup. Back then, I would make it with a little help from one of them cool gadgets known as a pouch! All I would do is pour its content into a pot, add some milk and water, stir and simmer for a few minutes and VOILÀ, lunch was ready to be served. And the best part is, since Vichyssoise can be eaten hot or cold, any leftovers I would usually eat straight out of the fridge!

Later in life, I learned how to make my own using fresh leeks and potatoes (and cream and butter, but let’s pretend that never happened) and never looked back. To be honest, it has been well over 25 years since I’ve last had “re-hydrated” Vichyssoise and I’m not even certain that I would like it if I was to have some today… better not even go there.

For many years, I would look forward to leeks being in season so I could make a huge batch of this favorite of mine. And then, for some strange reason, I almost forgot that the soup even existed… 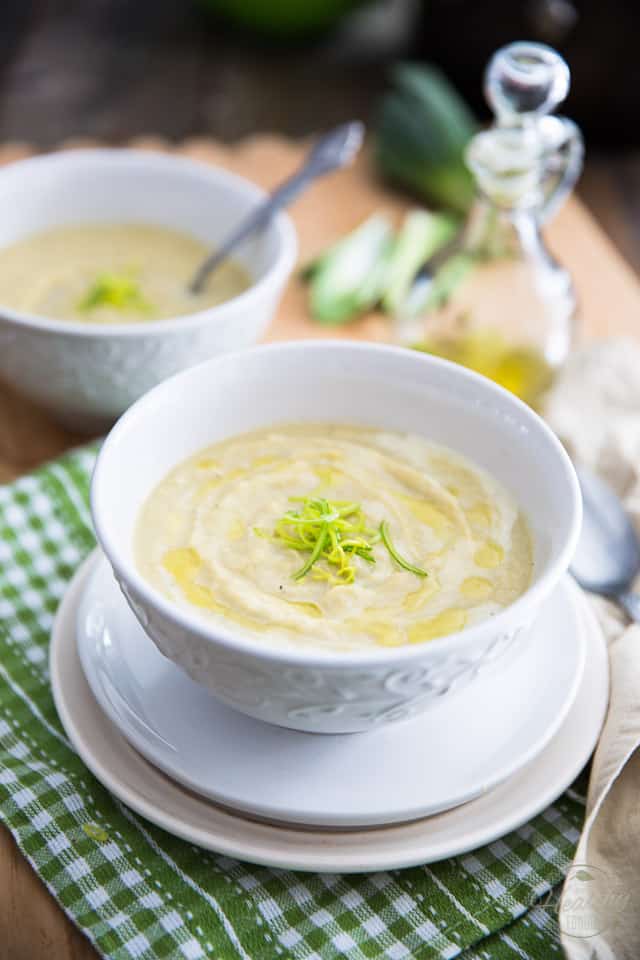 That was until I recently went to the grocery store to buy a few things and came face to face with a beautiful display of chubby and particularly fragrant leeks, which happened to be sitting right next to a pile of equally good-looking cauliflower.

Of course, that gave me an idea! Why not make Vichyssoise using cauliflower instead of potatoes? WHOA! Why I’d never thought of it before then is beyond me. These two veggies are like totally meant to be together.

The very next day, and the one after that, too, this beautiful, hearty soup was on my table. Frankly, I really couldn’t be happier with it: it’s thick, it’s creamy, it has tons of texture and flavor to last you ’til tomorrow.

And just like the classic, this Cauliflower Vichyssoise is just as tasty and delicious, regardless of whether you choose to serve it hot or chilled. 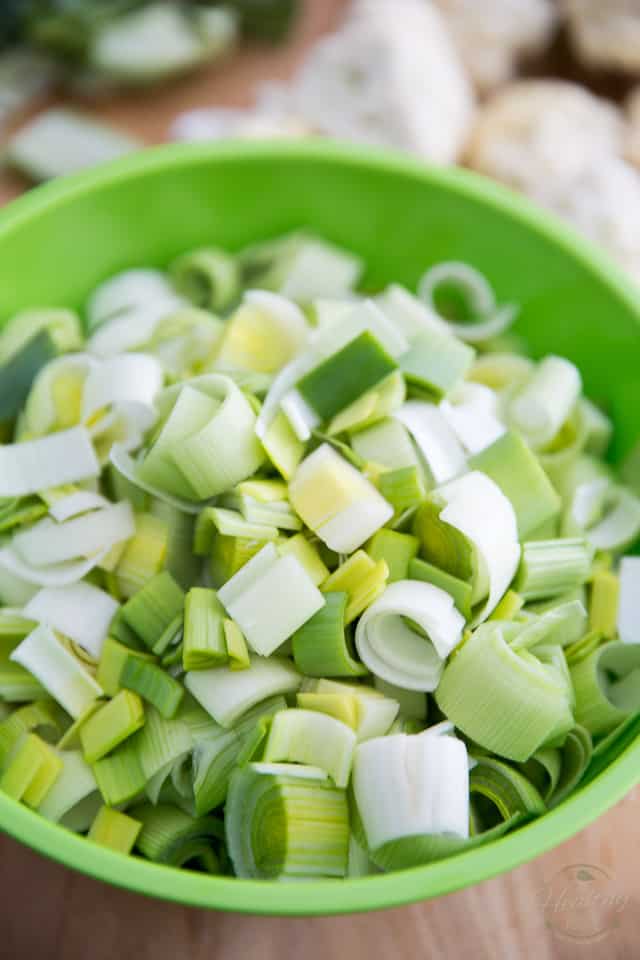 The most important step when making Vichyssoise, or any dish that calls for leeks for that matter, is to wash the leeks really, really well. A lot of dirt can get trapped between their leaves, especially in the root end and top part where the dark green leaves start to separate from the stalk.

So you’ll want to trim both those ends off and discard them. The dark green leaves you could save for another use, if you wanted to, but know that they are fairly fibrous and strong tasting…

Next, split the remaining stalks in half lengthwise and rise them under cool running water. Finally, pat the leeks dry and chop them coarsely. 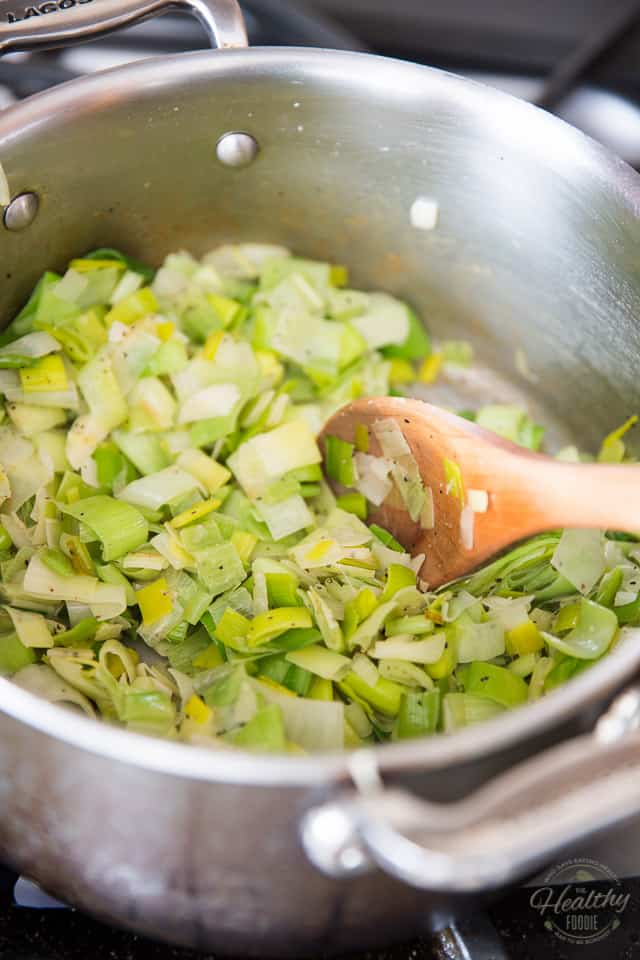 Once your leeks have been properly washed (and the rest of your ingredients prepped) heat the olive oil in a large stockpot set over medium heat.

Add the onions, garlic, chopped leeks, salt and pepper; cook until the onions and leeks are soft and fragrant and start to become translucent, about 5 minutes. 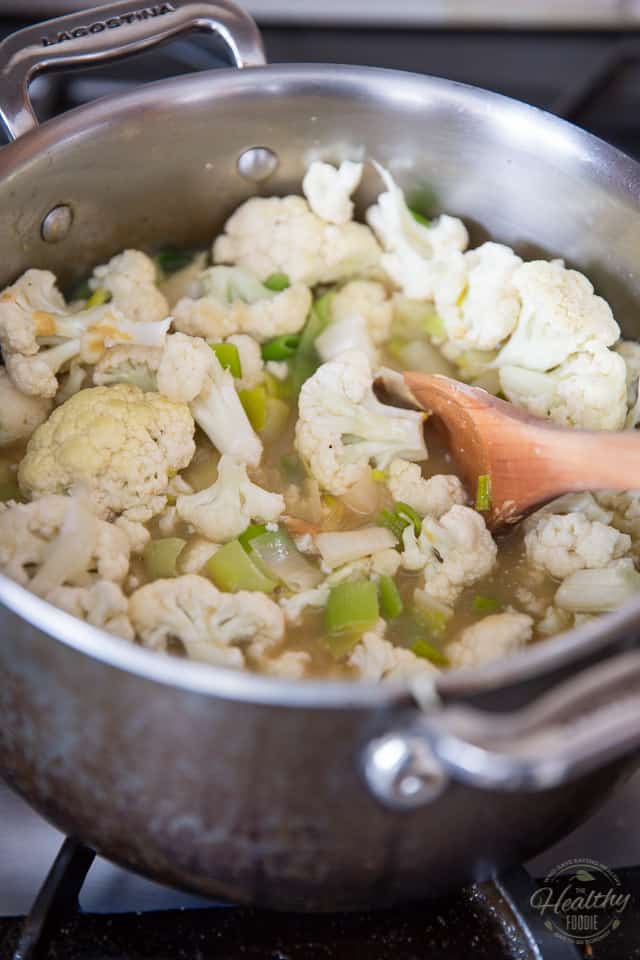 Add the cauliflower florets, vegetable broth, water, vermouth Dijon mustard and onion powder; stir to combine, increase the heat and bring to the boil, then reduce the heat to medium-low.

The addition of vermouth is not an absolute necessity, but I find it really does do a lot for the overall flavor of the soup. If you’d rather not use it, though, feel free to leave it out. 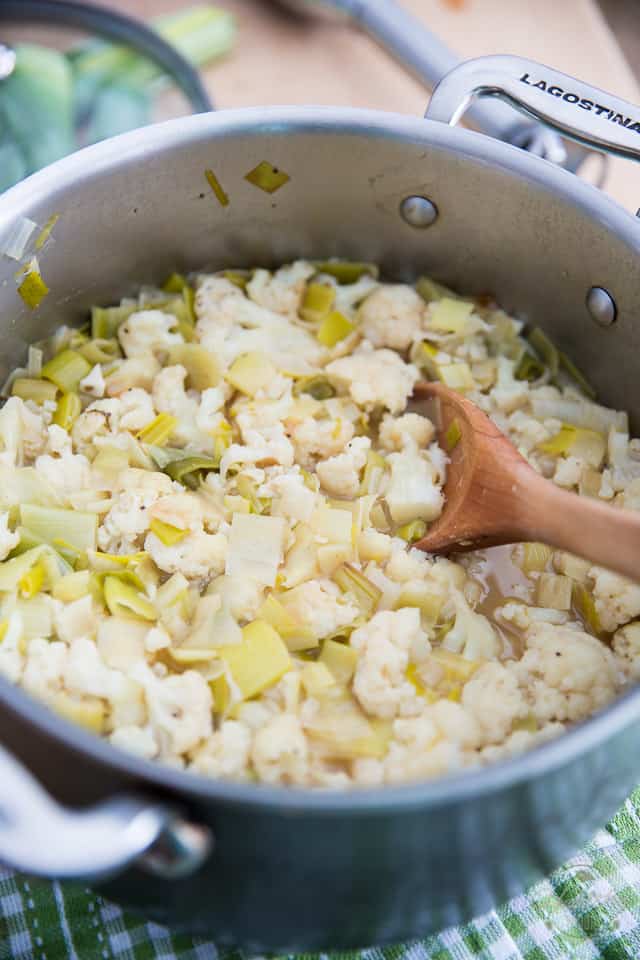 Now cover the pot and simmer until the cauliflower is really tender and even slightly overcooked, about 12 to 15 minutes. 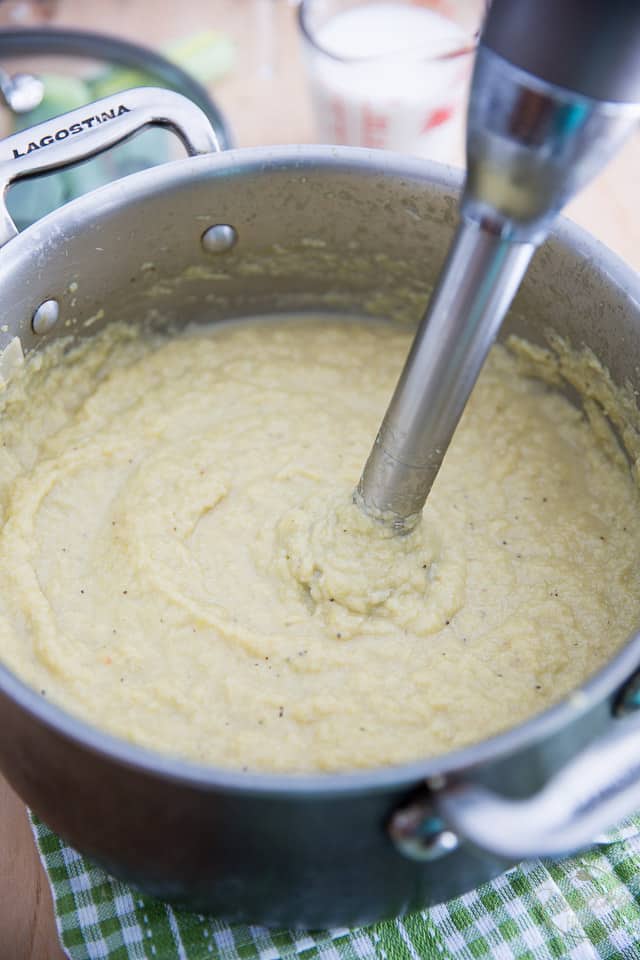 Reduce to a smooth puree with the help of a stick blender, or, for an even smoother soup, you could use a food processor or blender.

I really like the stick blender because it means less dishes to clean, but ultimately, the choice is yours. 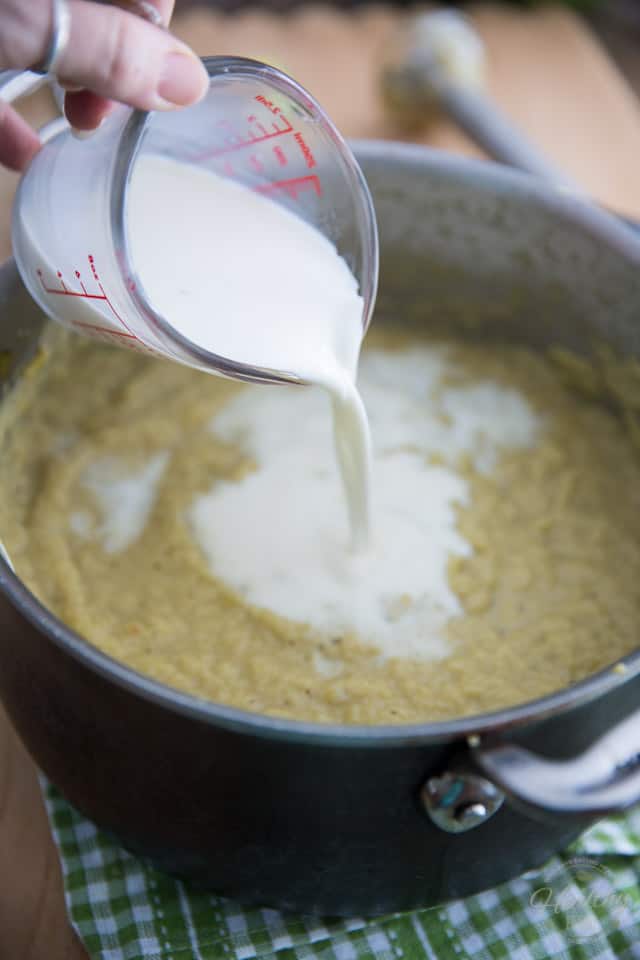 Finally, add the milk and stir until it’s completely incorporated. 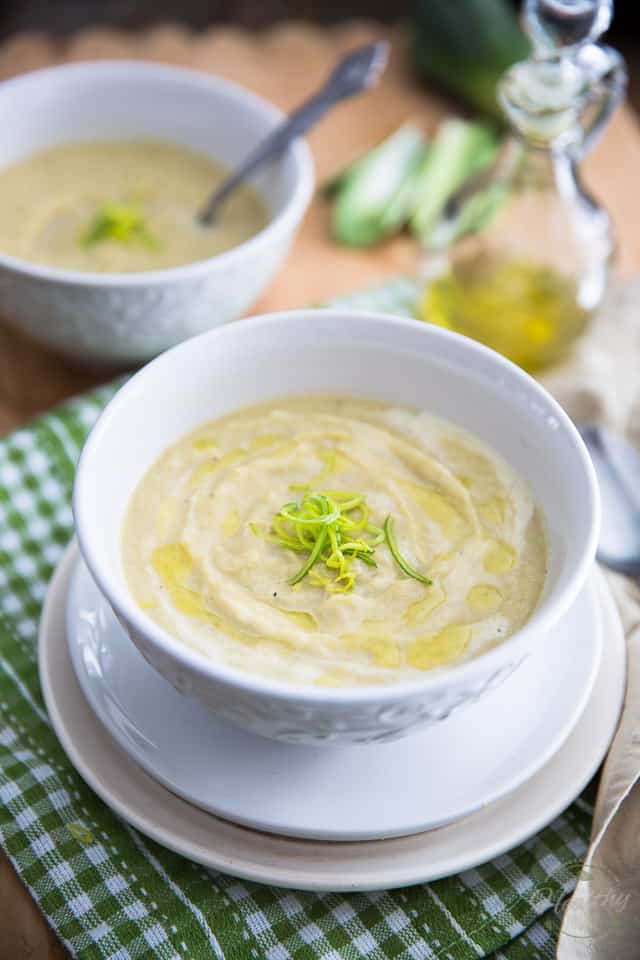 Now like I said earlier, Vichyssoise can be eaten hot or cold. If you’re going to eat it hot, it’s all good to go: you can serve it immediately.

If you prefer to serve it cold, though, you’ll want to chill it for at least 24 hours and then adjust the consistency by adding more milk. I mean, I’m a fan of thick soups, but this one gets really thick after it’s been completely chilled. Simply stir in a little bit more milk until you get the desired consistency – I think that about a cup or so should do the trick.

When ready to serve, garnish with a few drops of extra-virgin olive oil and chopped leek leaves, if desired. 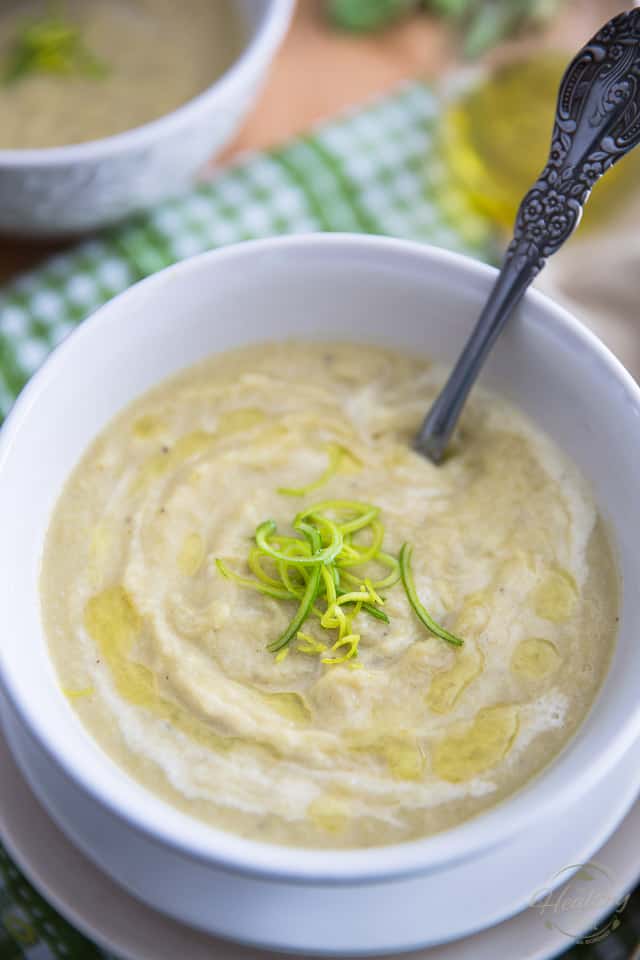 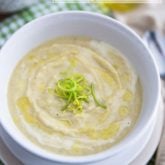 Prep Time: 5 minutes
Cook Time: 20 minutes
Total Time: 25 minutes
Whether you choose to serve it hot or chilled, this Cauliflower Vichyssoise is a very interesting and tasty twist on an already delicious classic!
Servings: 4