First off, I want to thank each and every one of you for your kind words and support after my last post. Honestly, I was really afraid that opening up and exposing my vulnerability would put a serious dent in the perception that you guys have of me, but I can see that I was far from the truth. Not only did you not judge me, you liked me all the more  for it.

Wow. My heart sang as I sighed a sigh of relief.

From the bottom of my heart, thank you guys. You might not realize just how big a difference each and every one of you is making in my life. If it weren’t for you all walking beside me, chances are I would have given up on my journey to health a long time ago.

So anyway, I’ve been back on my beloved train for 3 days now and I must say that I already feel much better, not to mention lighter!

Strange as it may sound, I had sort of allowed this little slip to happen (though I’d meant for it to be humble, NOT monumental!) and had set firm start and finish dates. Towards the end, I was really looking forward to getting back to my healthy ways, but found myself unable to cut my “vacation” short. Addictions aren’t that easy to hinder, apparently! My brain was like: “NO WAY! You said until the 7, this means I get until the 7!”

So now the house is clean of all temptations again and I am ready for action!

I must admit that I am suffering a bit as I now must stay in a calorie deficit to shed the pounds that I’ve so quickly gained, and since I am hoping to ditch them almost as fast as I piled them, I’ve taken a pretty drastic approach and have set my daily calorie intake sort of on the low side for the first 2 weeks.

Still, I feel fantastic about being able to stick with it and I almost look forward to stepping on the scale this Saturday. 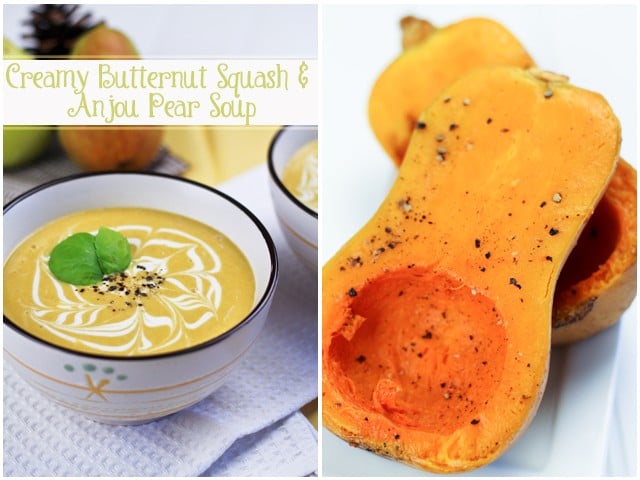 Now I’ll be honest, this beautiful soup I created way before the Holidays, but Christmas sort of got in the way and I started working on my Christmas menu and well, a few of my creations had to be tossed aside.

Still, I really wish I had some of that soup in my fridge right now! Matter of fact, I think that I’ll be making another batch this week-end…

I could use some of that silky, comforting bowl of health!

Plus, my taste buds would greatly appreciate the little hint of sweet spiciness , I’m absolutely certain of that!

After being fed pure refined sugar for 2 weeks and being suddenly left to hang dry, I’m sure they would welcome the subtle sweetness of this soup as soothing relief. 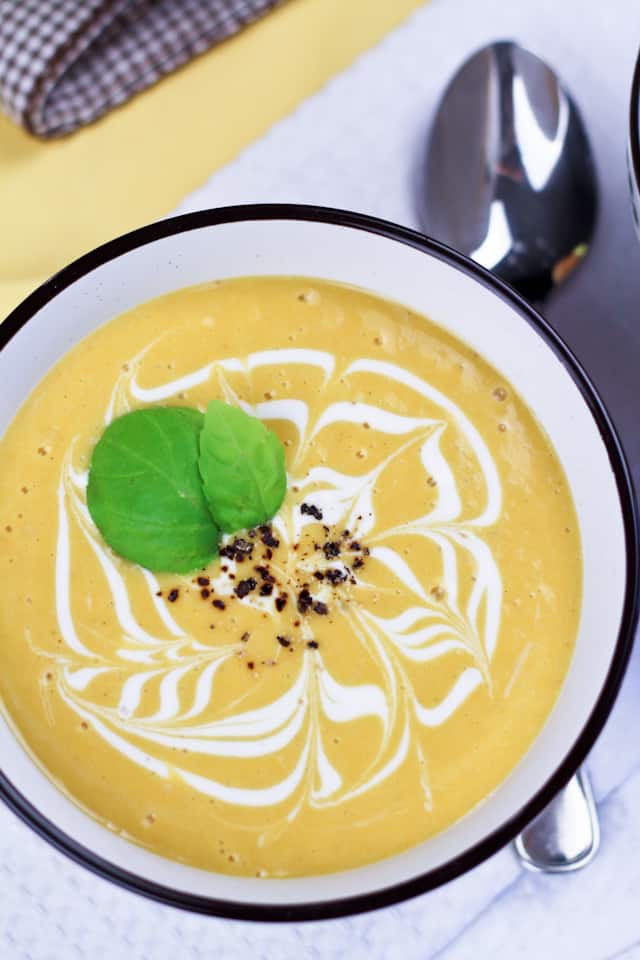 I’m also super grateful to have discovered a way to boost the protein contents of my soups while still keeping them vegetarian friendly by using egg whites and Greek yogurt.

As an added bonus, it also confers some sort of a fluffiness to soups.

The downside though it that they make them really delicate and hard to reheat. One has to be really careful not to heat them too much or too quickly, else the egg whites would cook and the yogurt would curdle.

Not what I call yummy!

But get this right you you’ll be rewarded with the creamiest, fluffiest soup you’ve ever had.

That’s it… I need a bowl NOW! I’m running to the store right right this minute so I can whip up a batch!

Kidding. I’ll be a good girl and wait until the weekend! 😉 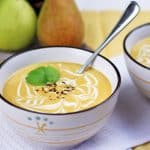 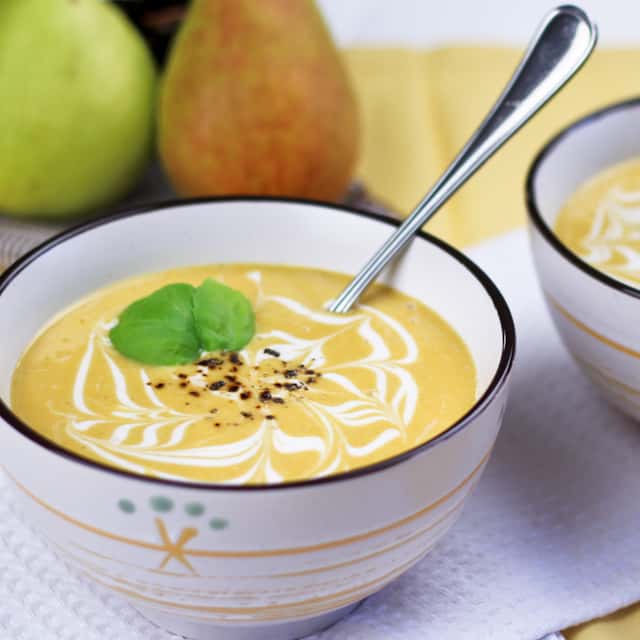 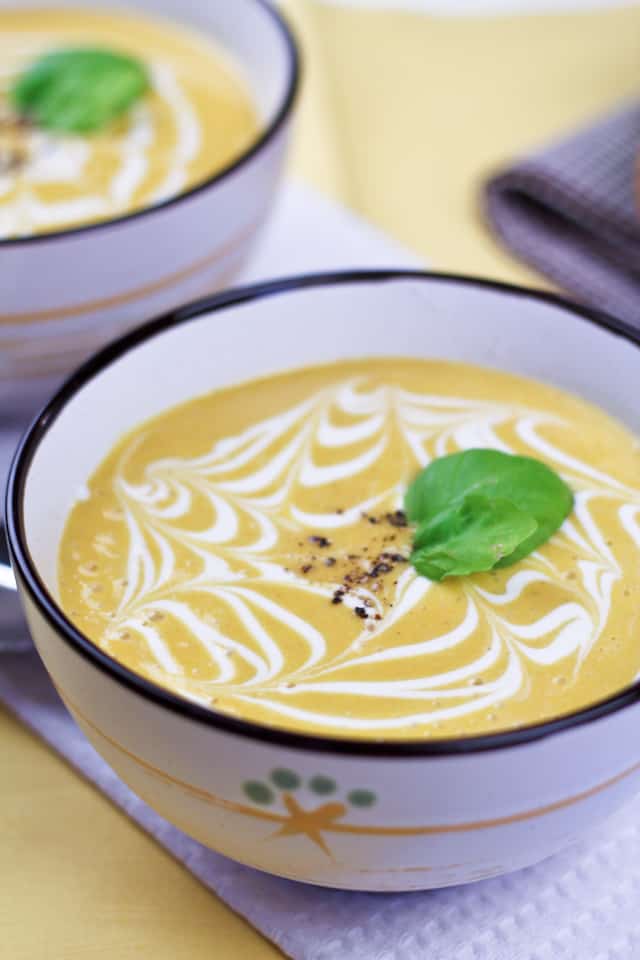 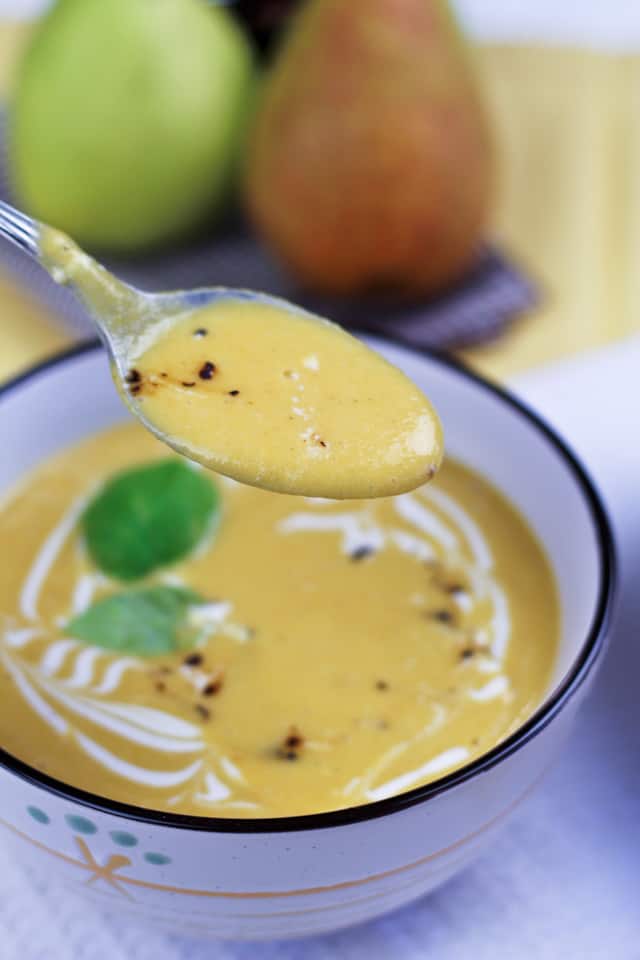 posted by Sonia! The Healthy Foodie on January 9, 2013