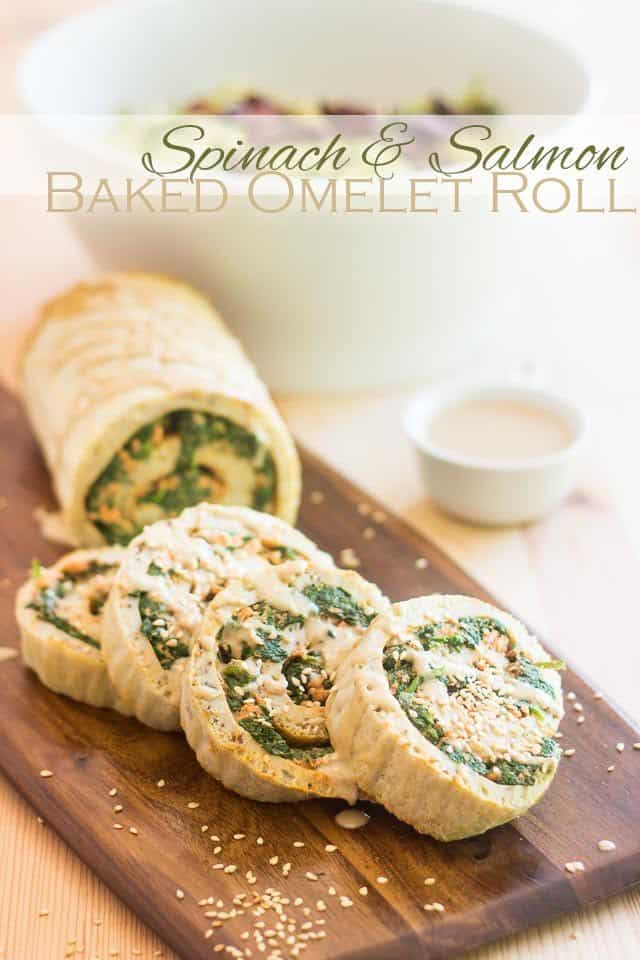 Seriously you guys. Did you know that one could bake, stuff and roll an omelet, much like they would a cake?

HOW FRIGGIN’ GENIUS IS THAT?

Call me ignoramus, but until I stumbled upon Michelle’s Baked Omelet Roulade recipe, over at Peachy Palate, I had NO idea that this could even be attempted. Actually, I don’t think the thought would’ve ever occurred to me… Or well, maybe it would have eventually, but it might have taken a great deal of time still, way too much time. Because until that day finally came, I would’ve been in total oblivion as to the existence of this deliciousness. What a shame that would’ve been!

Tell you what: now that I’ve successfully, and super easily might I add, made my very own Baked Omelet Roll, I am totally, crazily in love with the concept! I want to make all sorts of them. ALL KINDS, I tell you. Savory as well as sweet. I want to eat nothing but that for the next year or so! For realz.

Say… how many baked omelet recipes will you guys tolerate before you all ditch me?

Kidding, of course! You can expect me to share a couple, though, but I promise to be good and not share ALL of them. I’ll save only my top favorites for you guys. 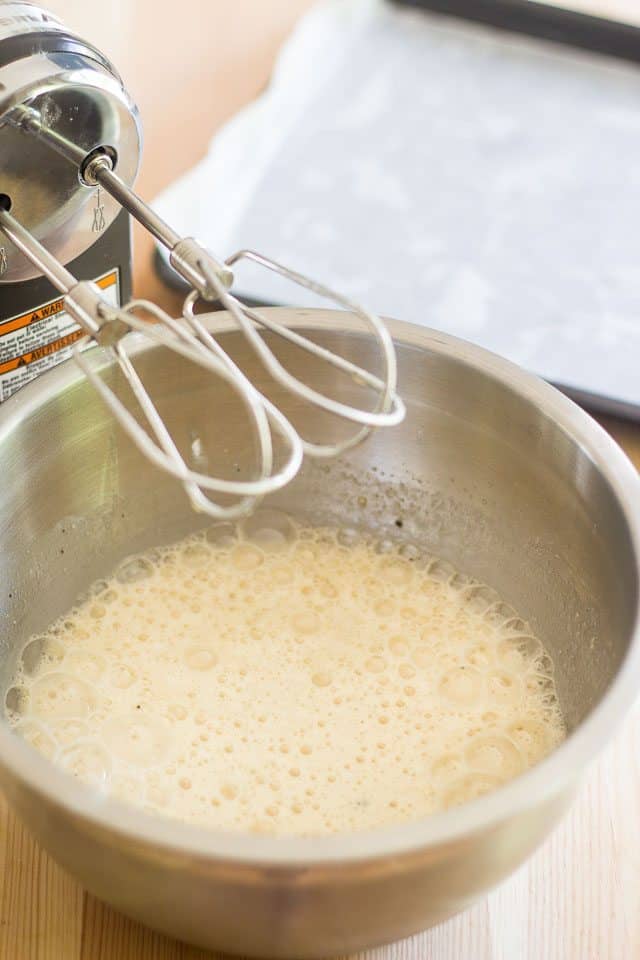 I say this Spinach and Salmon version would be a good place to start, won’t you agree? Alright, let’s do this then!

But before you touch any of your food ingredients, you need to preheat your oven to 350°F and then grease and line a 9″ x 13″ rimmed baking sheet with parchment paper. Make sure you leave a bit of an overhang at either ends: this will make rolling the omelet that much easier. Now put that aside and take out DA FOOD!

We’ll start by making the omelet “batter”, and for that, we need to add a bunch of eggs, some almond flour, tapioca flour, baking soda, coconut milk, salt and pepper to a large mixing bowl. You then want to mix this energetically until it becomes nice and frothy.

I was feeling lazy that day and opted to use my electric hand mixer, (blame it on the keto flu) but of course, you could very well do this with a good ole hand whisk. 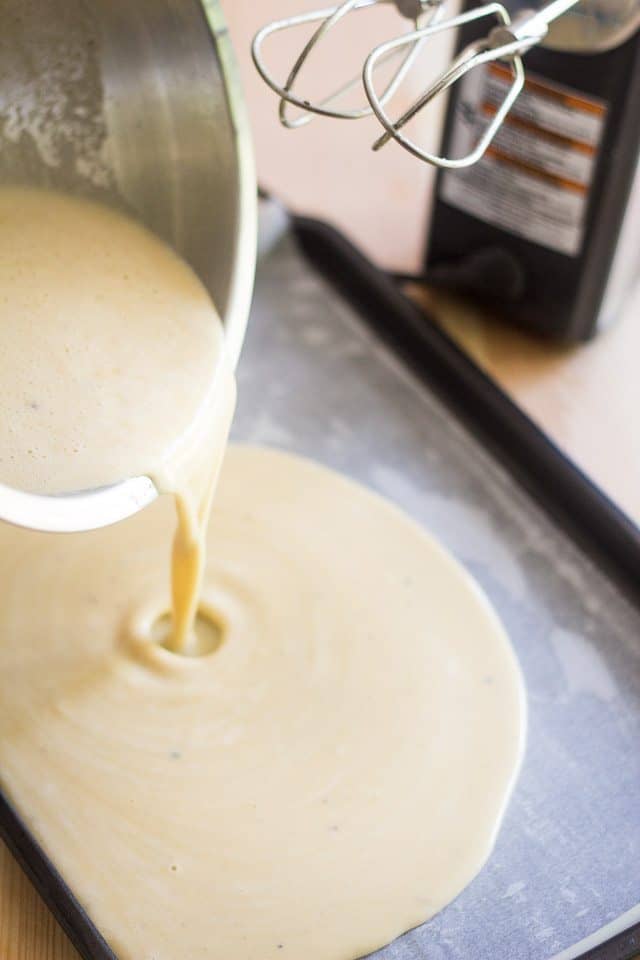 Pour the egg mixture right into the prepared baking sheet and delicately place it in the oven. Bake this for about 10-12 minutes, until just set. Don’t expect much coloring to happen, the omelet will remain fairly pale.

While the omelet is in the oven, chop the spinach roughly and then place it in a large microwave safe bowl. Cook it on high, uncovered, for about 4 minutes or until completely wilted. Allow it to cool for a few minutes and then squeeze as much water as you can out of it.

Put the spinach back in the bowl, then add the canned salmon, tahini, paleo mayo, paprika, salt and pepper. Mix everything delicately until the ingredients are evenly distributed. 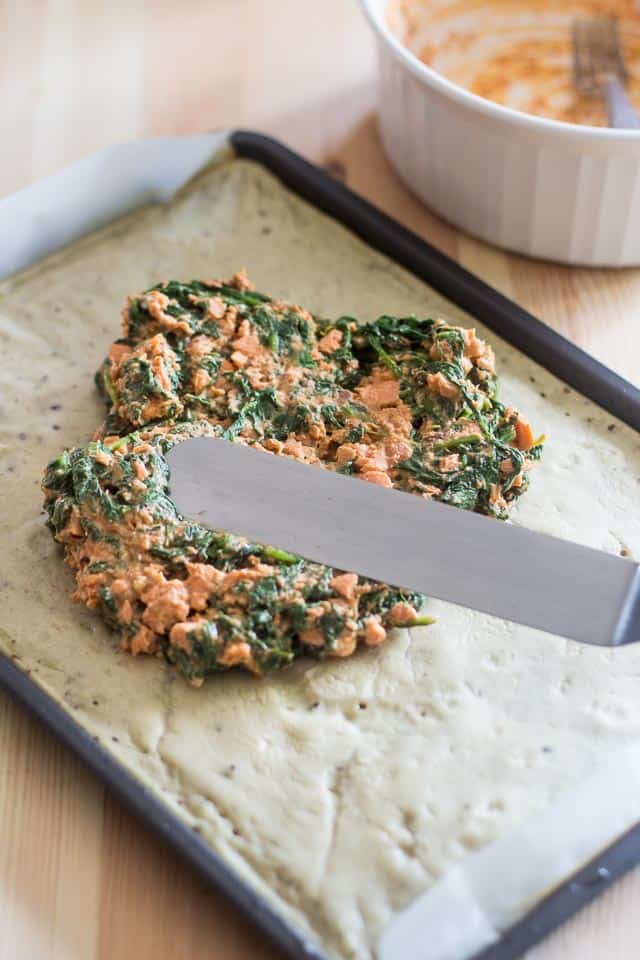 When your omelet is cooked through, remove it from the oven and allow it to cool for 2-3 minutes, then spread the salmon mixture all over its surface with a spatula.

Be very ginger here: you wouldn’t want to rip your omelet! 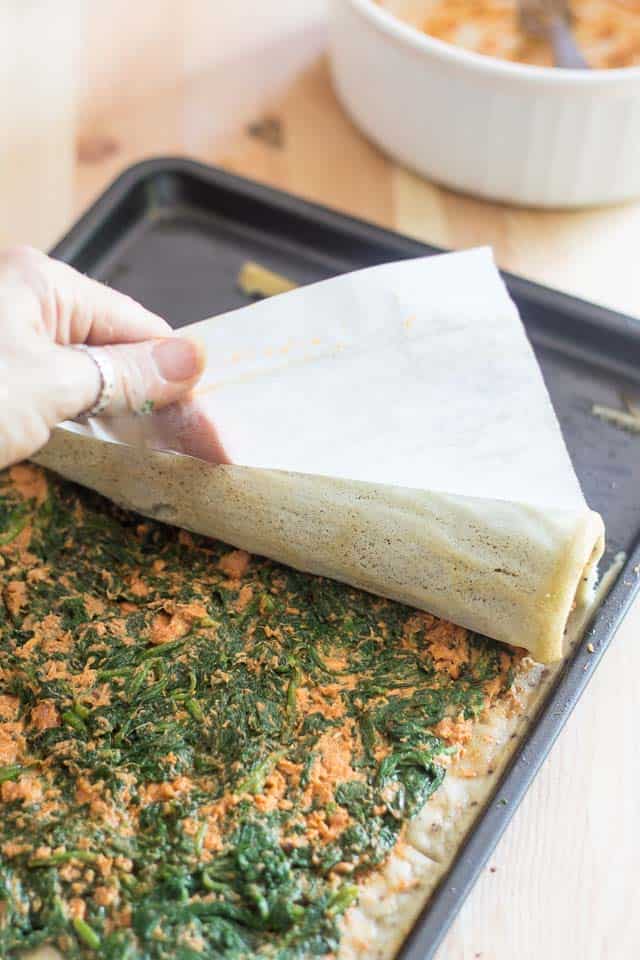 Roll the omelet gently but tightly by pulling delicately on the parchment paper, which will help guide and hold it.

I think you will be surprised by how easily this rolls. I was really expecting it to crack and fall apart, but not at all. It rolls beautifully and smoothly, much better than any cake I’ve ever dealt with. 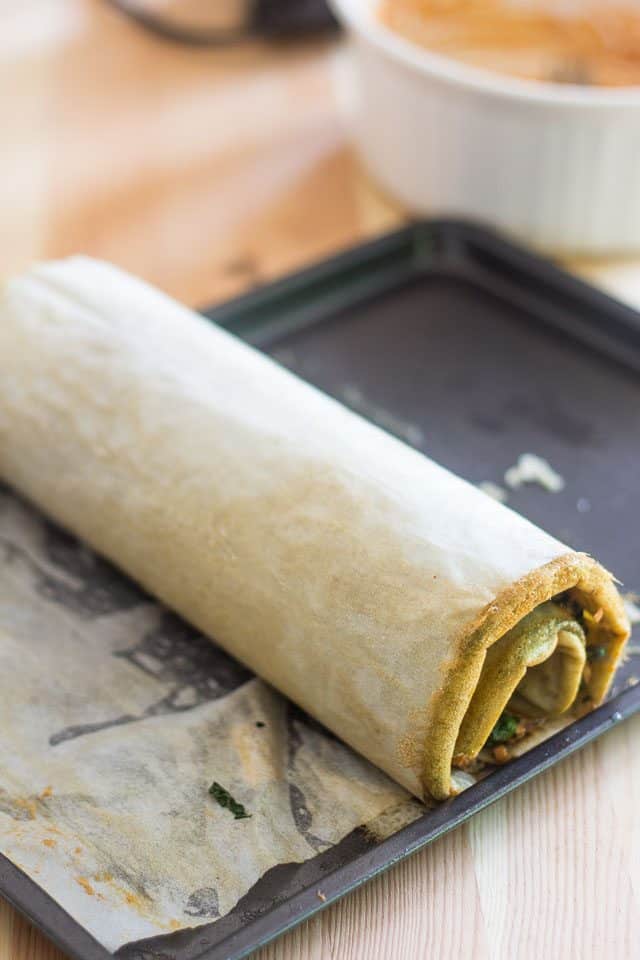 Once your omelet is completely rolled up, wrap it with the parchment paper and place it in the fridge to cool and firm up for a couple of hours, or even until the next day.

You know, if you wanted to, you could also serve this warm, right as it comes out of the oven, but it’ll be a tad more delicate, so you’ll have to be extra careful when slicing it and when handling the slices. 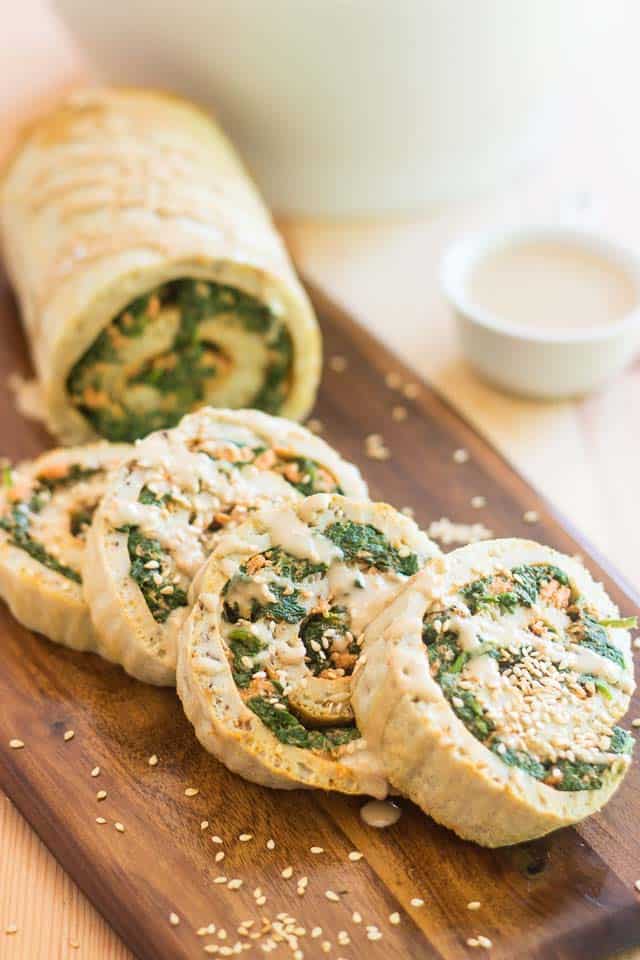 When you are ready to serve, slice into 8 slices and drizzle with tahini sauce that’s been thinned with a little bit of water, then sprinkle generously with toasted sesame seeds.

All in all, this is a crazy versatile dish (and can you say pretty?) one cannot not fall in love with. It can be enjoyed warm or chilled, is just as amazing for breakfast as it is for dinner and you can stuff it with pretty much anything your heart desires, or your fridge has to offer…

Plus, I think it would look pretty spectacular on a buffet table, which, in my opinion, makes it a great contender for your next pot-luck party. 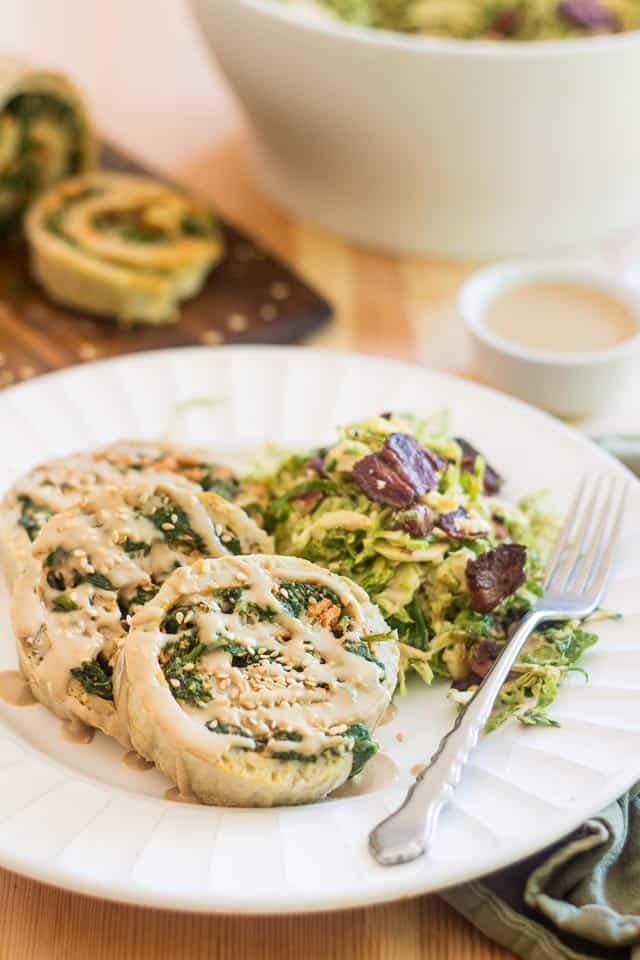 Personally, I chose to eat mine for breakfast with a healthy serving of the Creamy Brussels Sprouts and Smokey Bacon Salad I had just made.

Talk about a delicious and nutritious way to start the day! I wouldn’t have it any other way… 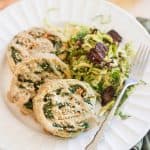 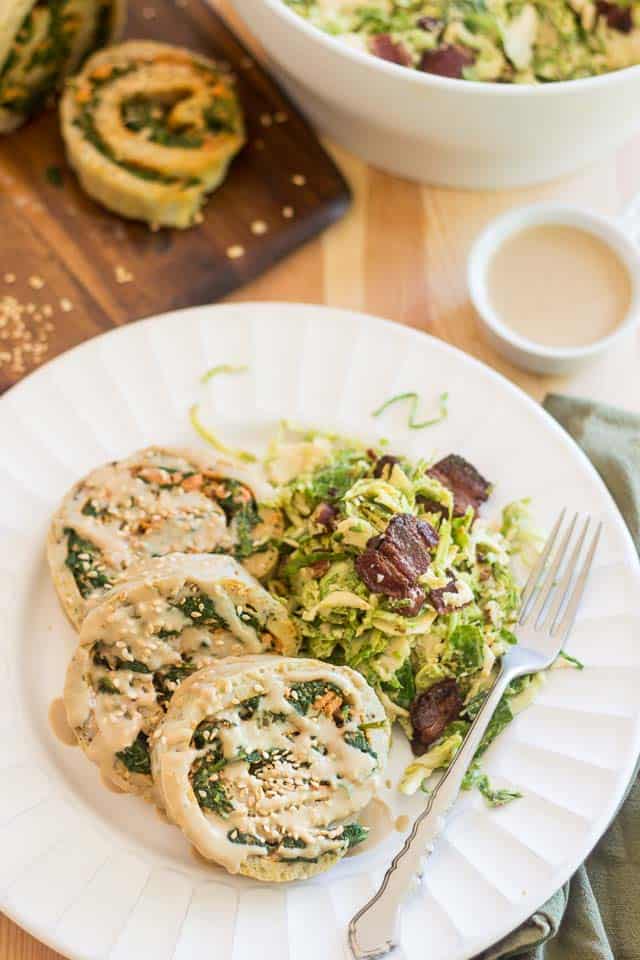 posted by Sonia! The Healthy Foodie on September 11, 2014