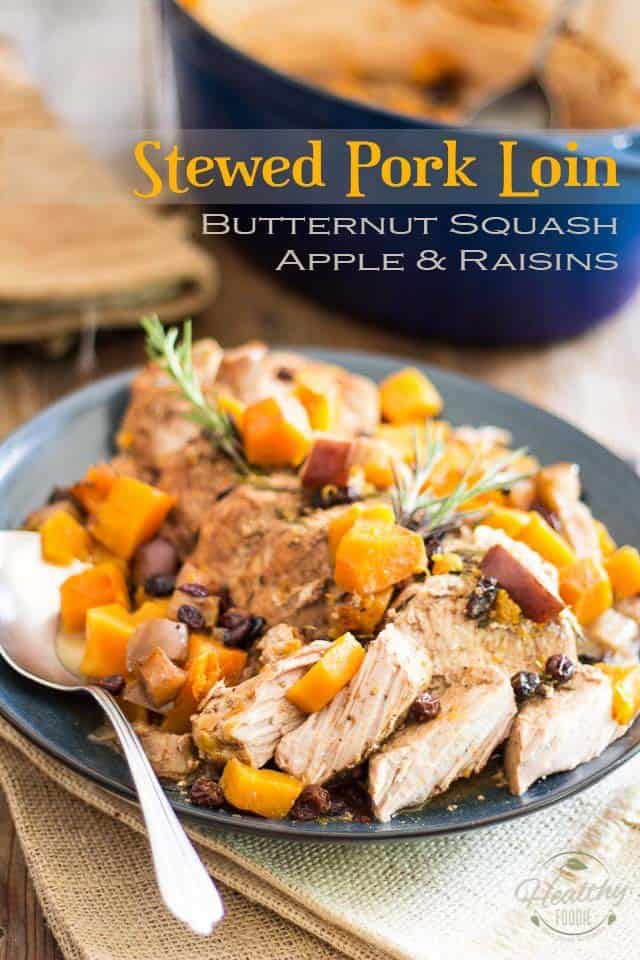 Recently, I was in the mood for a great big bowl of my Apple and Butternut Squash Pulled Pork Casserole but I also didn’t feel like cooking at all. I just wanted to make some kind of dish that would have me throw everything in a pot, shove it in the oven and forget about it until it was ready to eat.

So I decided to change things up a bit and instead, made a Stewed Pork Loin with Butternut Squash, Apple & Raisins.

At first, I wasn’t even going to log the recipe because I figured it was way too similar to something I’d already made. But then, when I saw the pork roast resting prettily in the Dutch oven, all covered in onion slices and rosemary, I kinda changed my mind and decided to snap a few pictures and take notes, just in case. 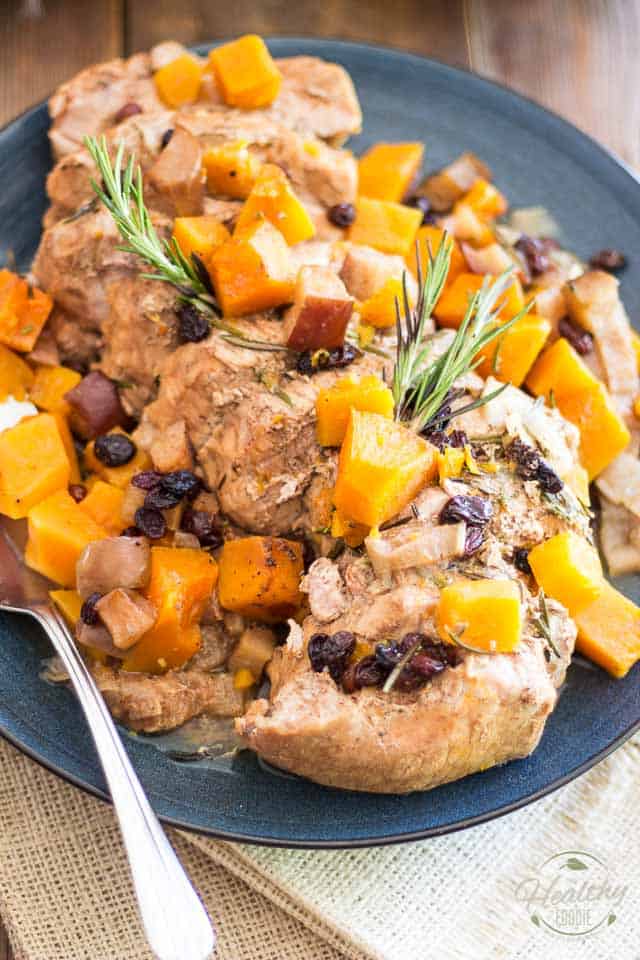 Honestly, I’m happy I did: while this new dish is fairly similar to the original, there are still a few minor differences between the two that may lead you to choose one over the other. For one, I really toned down the sweetness in this new version, and upped the tanginess quite a notch, too.

Also, the way the meat is handled here gives your plate a much more substantial feel to it… and you can easily separate the meat from its accompaniments, so you can have both components separately if you so desire.

Last but not least, this new version doesn’t have you spend quite as much time in the kitchen (and cooks faster, too) ) as it needs no attendance from you whatsoever while it’s doing its thing in the oven. Well, save from removing the lid after a little while, that is…which really shouldn’t take too long!

In short, this dish belongs to what I like tho call the “Prep and Forget” category!

Let’s get started with the prep… 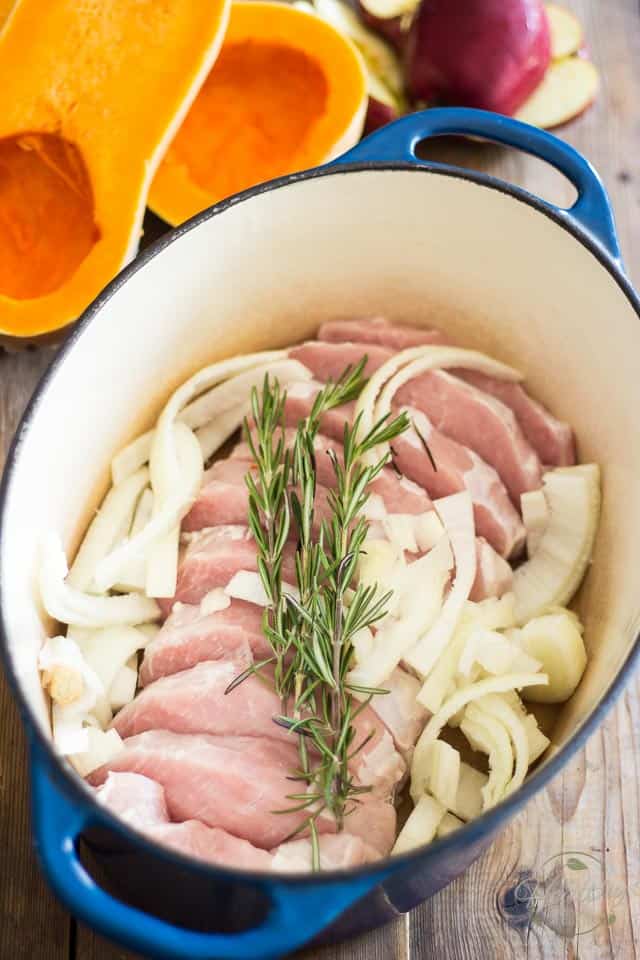 To begin with, remove all visible fat from the pork loin (or leave it on if you prefer) and then cut the roast into 8 to 12 slices. For instance, you could do 8 thick slices if you were going to serve 1 slice per person to 8 individuals or 2 slices each to 4 people. Or, you could do 12 thinner slices if you were going to serve 2 slices to 6 different diners… you get the idea!

Once the meat has been cut to your liking, place it in a 7 quart Dutch oven and then put the sliced onions and fresh rosemary right on top of it… 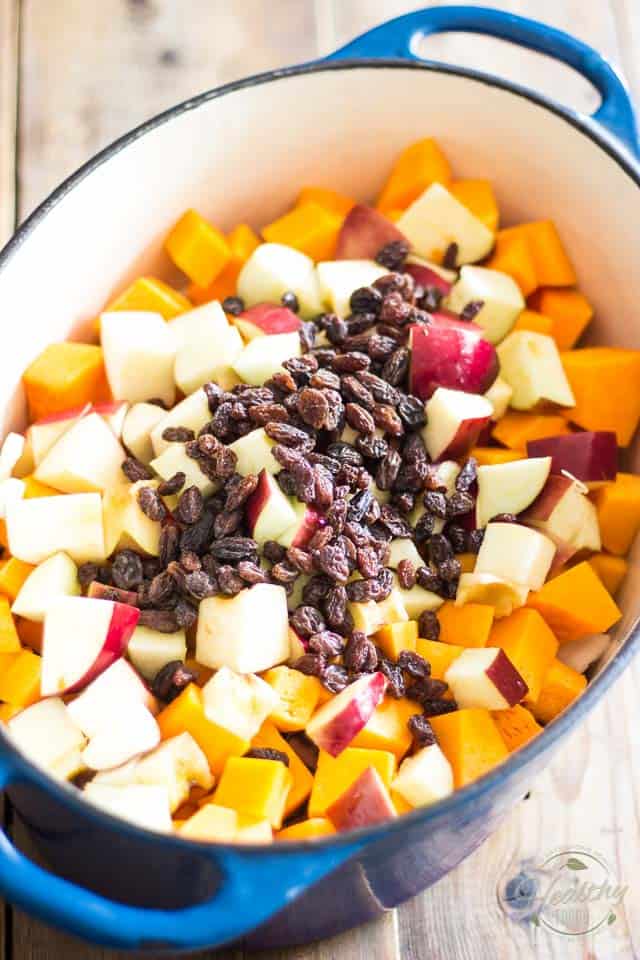 …followed by the diced butternut squash, apples and raisins.

For the apple, try and choose a variety that won’t turn to mush on you once cooked, like Red Delicious, or Gala for instance; it’s nice to still have pieces of fruit to bite into! Oh, and don’t bother removing the peel: it adds so much texture and color to the dish. By all means, just leave it on (unless you really can’t stand the thing, that is, in which case, you’d be better off removing it… I won’t resent you for that, promise!) 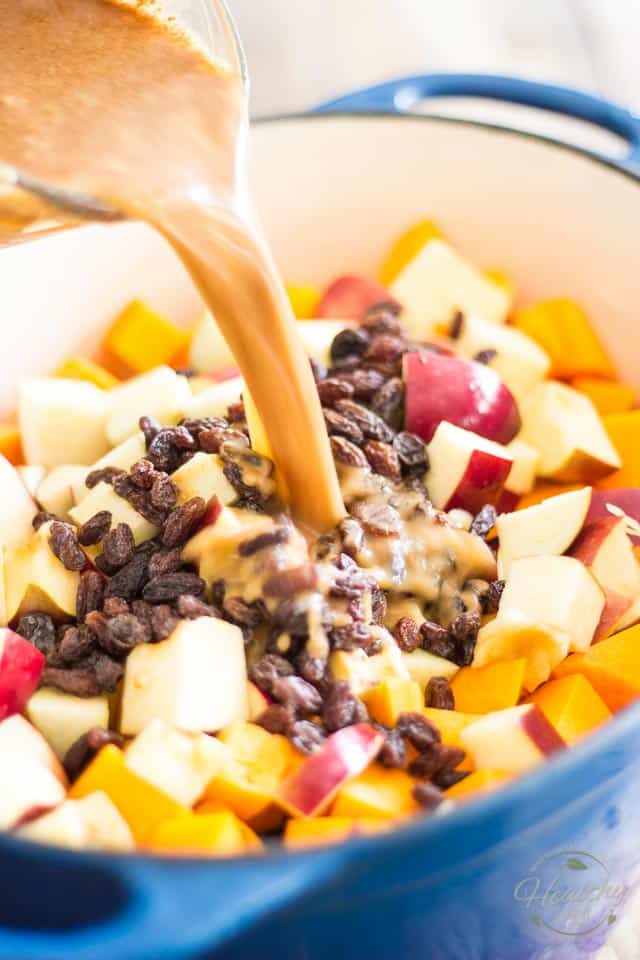 Now grab a large glass measuring cup, and put some sweet apple cider (or unsweetened apple juice, if you can’t get your hands on the sweet apple cider) bone broth, apple cider vinegar, Dijon mustard, salt, pepper, cinnamon and cloves in it, then mix with a flat whisk until everything is well combined.

Pour that cooking liquid into the Dutch oven, place the lid on and bake in a 350°F oven for about 75 minutes, or until the squash is really tender. 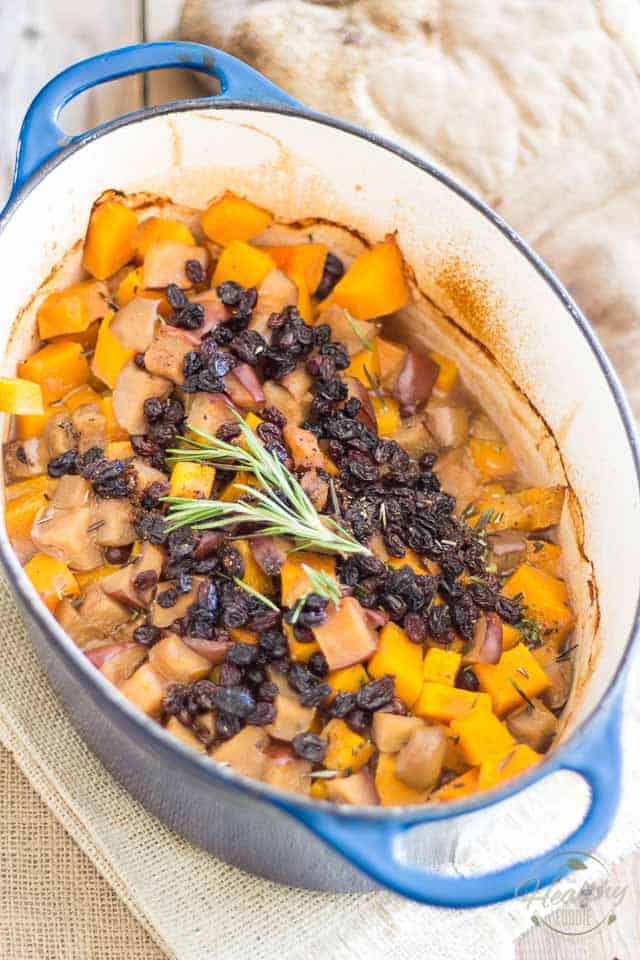 At this point, you’ll want to remove the lid and continue cooking for an additional 25 to 30 minutes, just to get some of the cooking liquid to evaporate and so the top has a chance to turn slightly golden.

Serve this immediately, while it’s still piping hot. Don’t forget to remove the “cooked” rosemary sprigs, but feel free to use some fresh ones to garnish, if you’d like!

Time to sit yourself down and enjoy; Something tells me your tummy will be entirely satisfied. 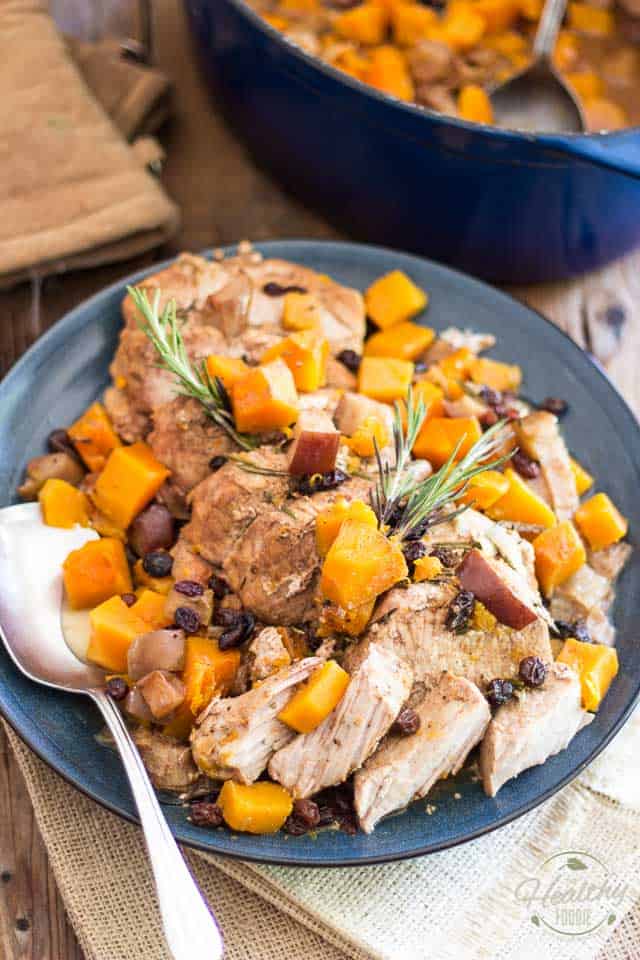 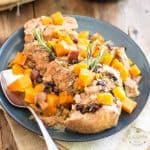 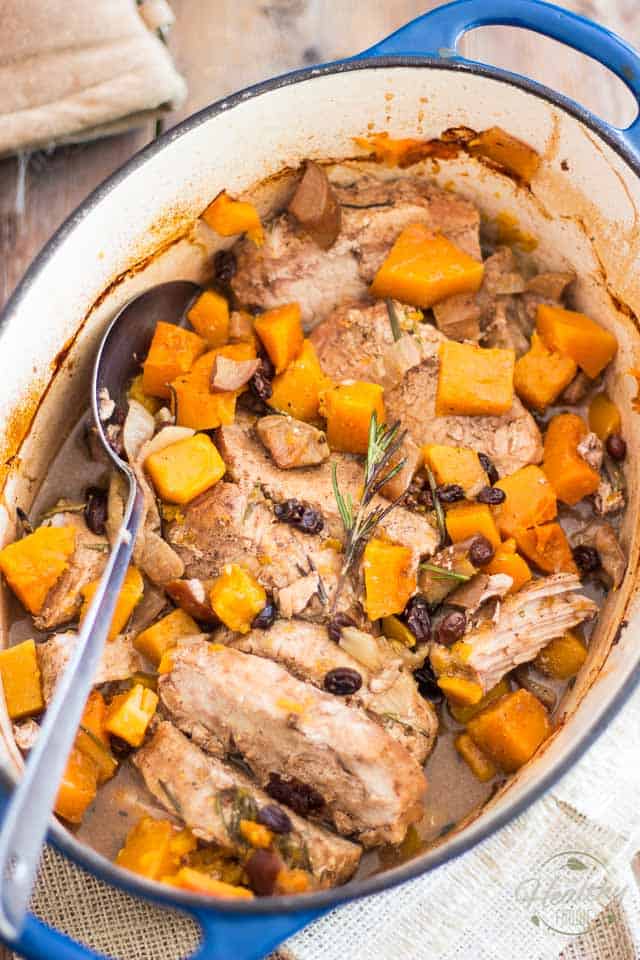 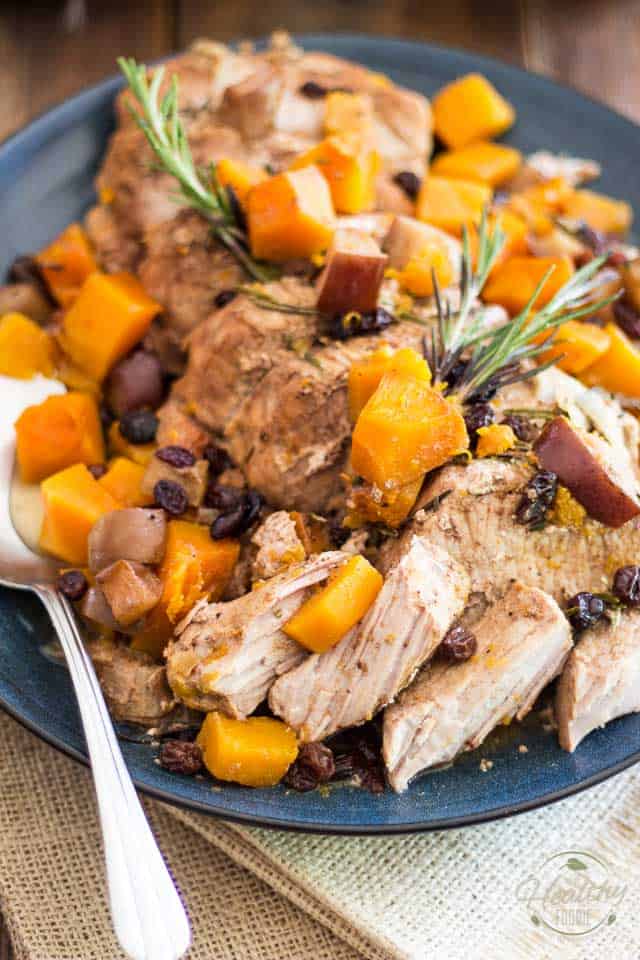