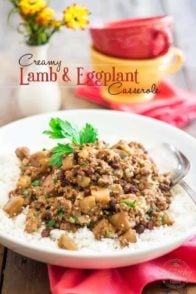 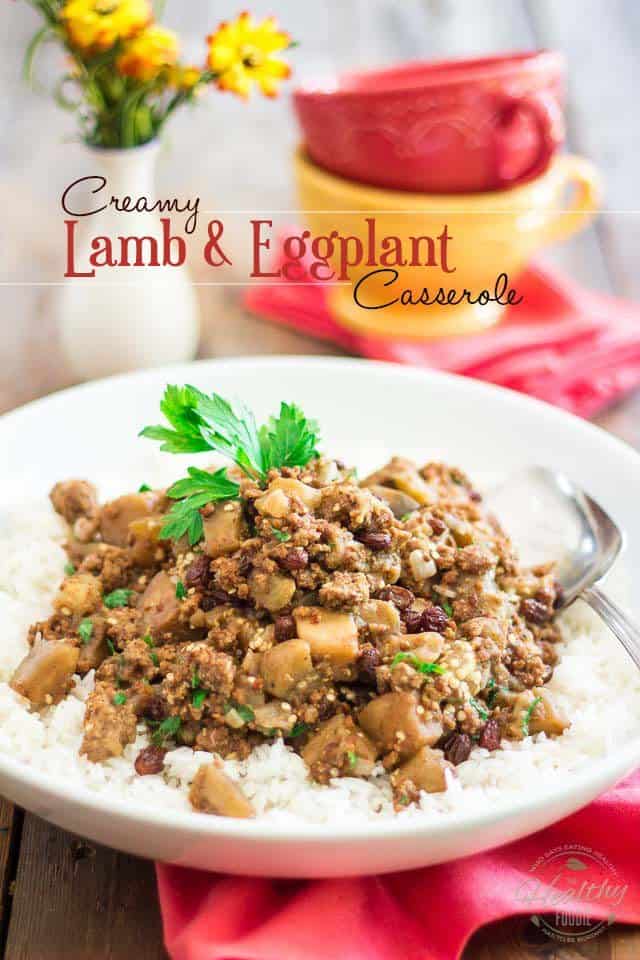 Between working 2 jobs and writing a cookbook, I’d been so busy over the last 3 years that my house got seriously neglected, the poor thing.

Since I’d like to avoid seeing my precious home go to ruins, I decided that I would take things a bit easier with the blog this summer and that I would give my house the tender loving care that it deserves.

For the last month and a half, I’ve been spending a great deal of time working around the yard, doing stuff like weeding the flower beds, where WAY more weeds than flowers were growing, and fixing the fence which the wind had torn down an entire section of on Christmas day of last year. I’d managed to put it back up with the help of my son-in-law and we held it in place as best we could with a bunch of ropes tied to various trees and branches… but needless to say it needed a more permanent solution!

My to-do list is still so full of projects, I’m not even quite sure that I’ll have enough time this summer to complete everything, especially not with the upcoming knee surgery. The simple task of weeding the flowerbeds must have taken me well over 20 hours, just to give you an idea…

Still, I’m taking things one day at a time, crossing tasks off my to-do list slowly but surely. I must admit that I’m enjoying the time spent working on projects that don’t involve pots and pans, a camera or a computer.

So that explains why I’ve been posting a little less often and haven’t been quite as present on my social pages, lately. 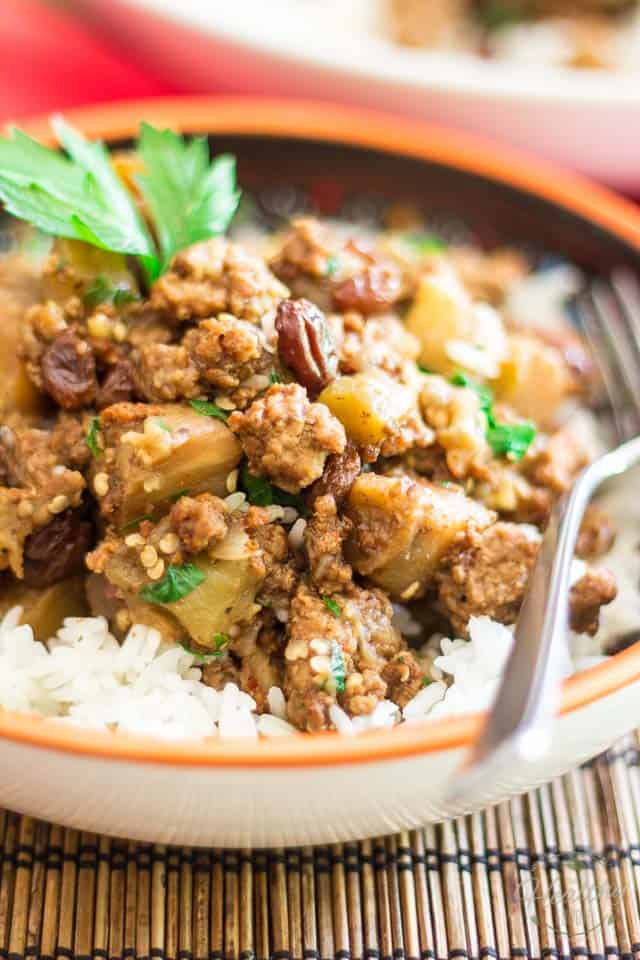 Fear not, though, I’m still finding time to come up with some new tasty and creative dishes, such as this Creamy Lamb and Eggplant Casserole.

The inspiration for this one came to me out of a craving I got for the cinnamon rice that they sometimes serve with their shish-kabobs at my favorite Lebanese food joint. That special rice has a very subtle spiced flavor with tiny little pieces of meat in it. For some reason, though, they don’t always have it; more often than not, they’re only option is plain white rice.

So I decided to try and make something similar at home, but to also kick it up a notch. But then you know, me being me, I got carried away and the dish turned into something entirely different… but totally heavenly!

This Creamy Lamb and Eggplant Casserole has got to be one of the best things I’ve eaten over the last, well…. let’s leave it at recently! It is nicely spiced, but not overly so. The eggplant confers a comforting creaminess to the dish while the lamb gives it tons of flavor. The addition of raisins adds a hint of sweetness that your palate will no doubt seriously appreciate. I’m telling you, this is like nothing I’ve ever eaten before, but I get the feeling I’ll be eating it again, and often.

And if you dare give it a try, I think you will, too! 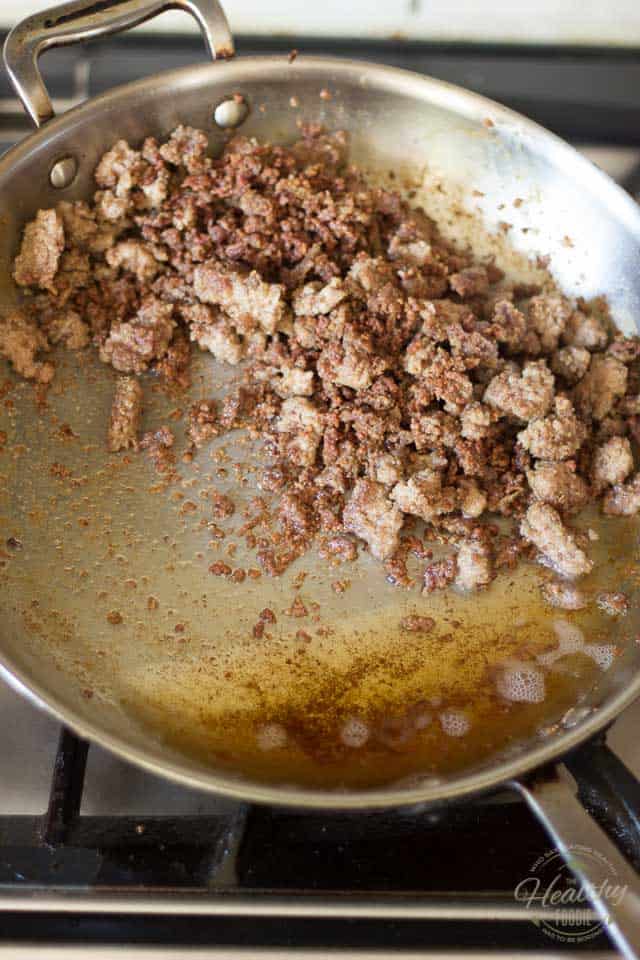 Put the ground lamb in a large skillet set over medium-high heat. No need to add any fat, trust me; the meat will take care of rendering its own. Just break the meat up into small little pieces with a large wooden spoon and sprinkle it with 1 teaspoon of salt. Cook until the meat is golden brown and crispy, which will take about 12 to 15 minutes.

Now see all that fat? It needs to go. Not that it’s necessarily bad for you, but there’s a bit too much for a single dish for my liking… I removed close to 1/2 a cup of it from my pan. So drain it, but don’t discard it, unless you didn’t use grass-fed lamb, that is, in which case you’d be better off tossing it. But if you did use well sourced meat, then by all means, hang on to that fat and use it later for cooking other stuff. It’ll add tons of flavor to your food! (although you might not want to use it for pancakes and the likes, you know… Think more in terms of eggs, sauteed mushrooms or pan-fried sweet potatoes) 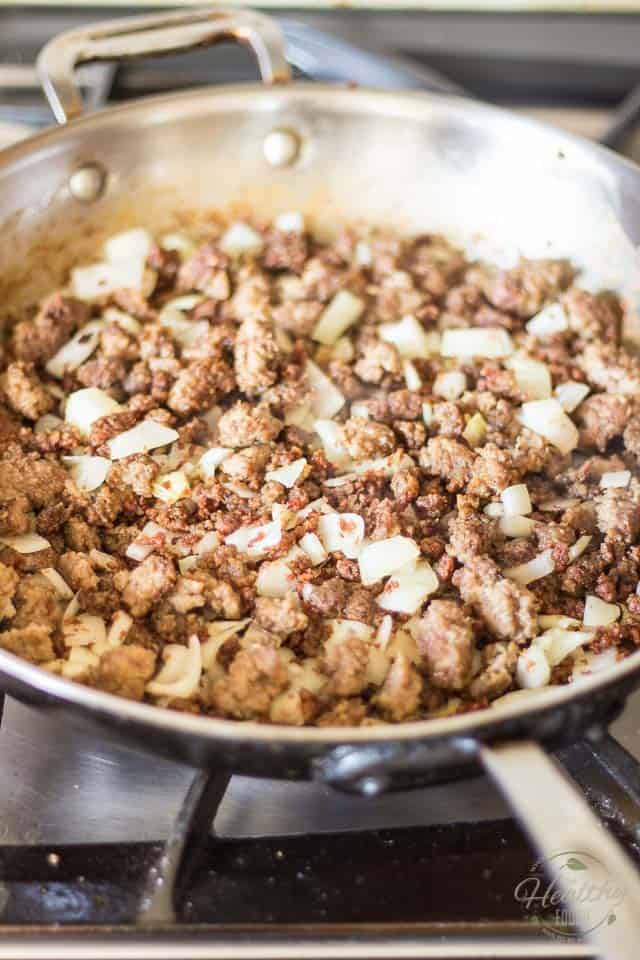 Alright, so now that the meat is nice and crispy and that all the excess fat has been removed, add the chopped onion to the pan and cook for about 3 minutes, or until fragrant and slightly softened. 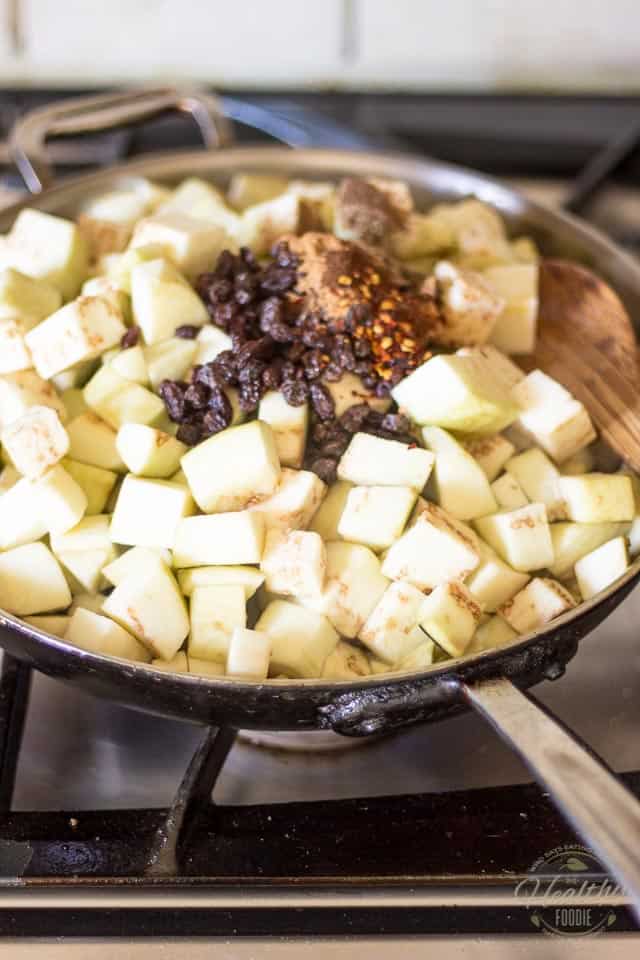 Then, throw in the water, eggplant, raisins, an additional half teaspoon of salt as well as the remaining spices, i.e. black pepper, chili pepper flakes, ground allspice, cardamom and clove. 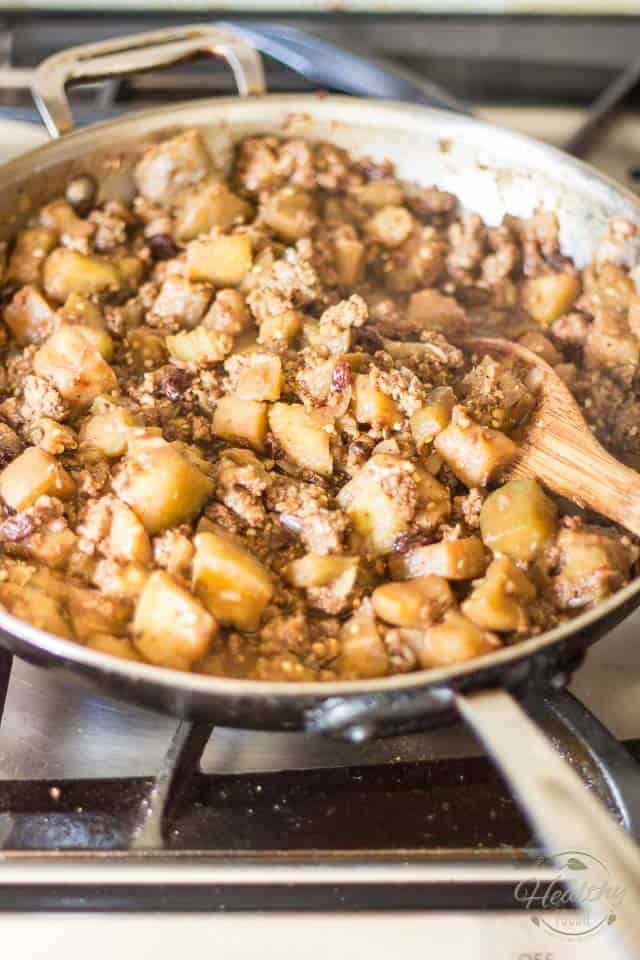 Lower the heat to medium-low and cook, stirring occasionally, until the eggplant is tender and creamy, which should take about 25 to 30 minutes. 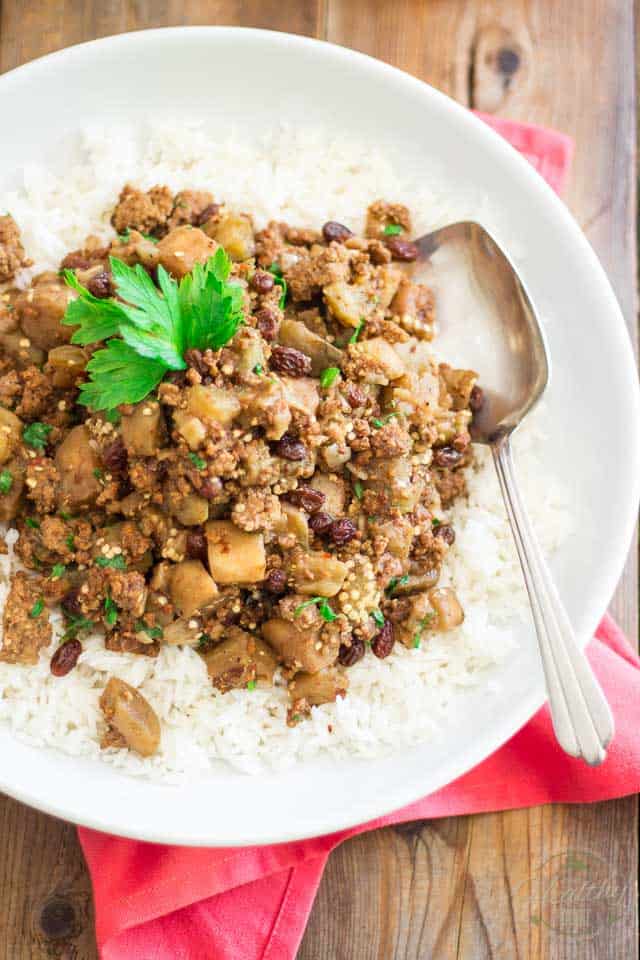 Delicately stir in the chopped parsley and serve immediately, over a bed of cooked white rice or cauli-rice

As you an see, I chose to go the white rice route because frankly, I love the stuff!

I see it appearing more and more in paleo recipes as it’s apparently becoming more and more accepted as a source of fast digesting carbs. Although I was a bit “anti-white-rice-movement” at first, now that I’m including more carbs in my diet, I kind of find myself falling in love with the concept and really feel like riding the wave, too… at least for the time being.

If you’re not quite there yet, though, feel free to stick with cauli-rice. 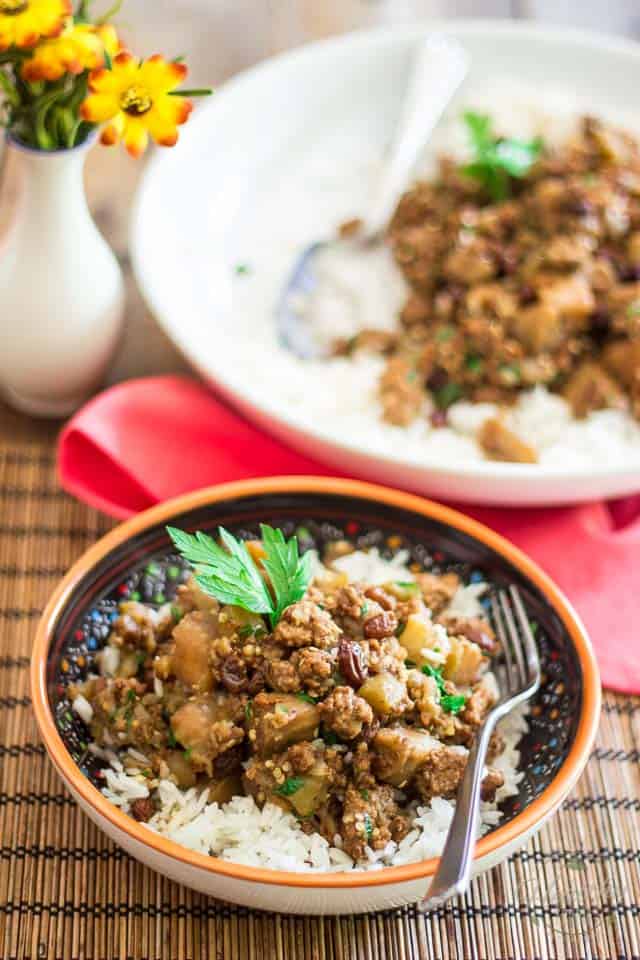 Oh, and I may or may not have also purchased a bag of baby new white potatoes, with the intent of making a Warm Potato Salad with Goat Cheese and Crispy Bacon, like I used to do back when I was camping regularly…

But that’s a whole ‘nother story and for a whole different post.

For now, let’s focus on this delectable dish that’s sitting there, waiting to be devoured. I truly hope that you like it as much as I did and that you will share your impressions with me, should you decide to give it a try! 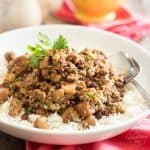 *If you used grass-fed lamb, make sure you hold on to that fat and use it for cooking later. It’ll add tons of flavor to your food! 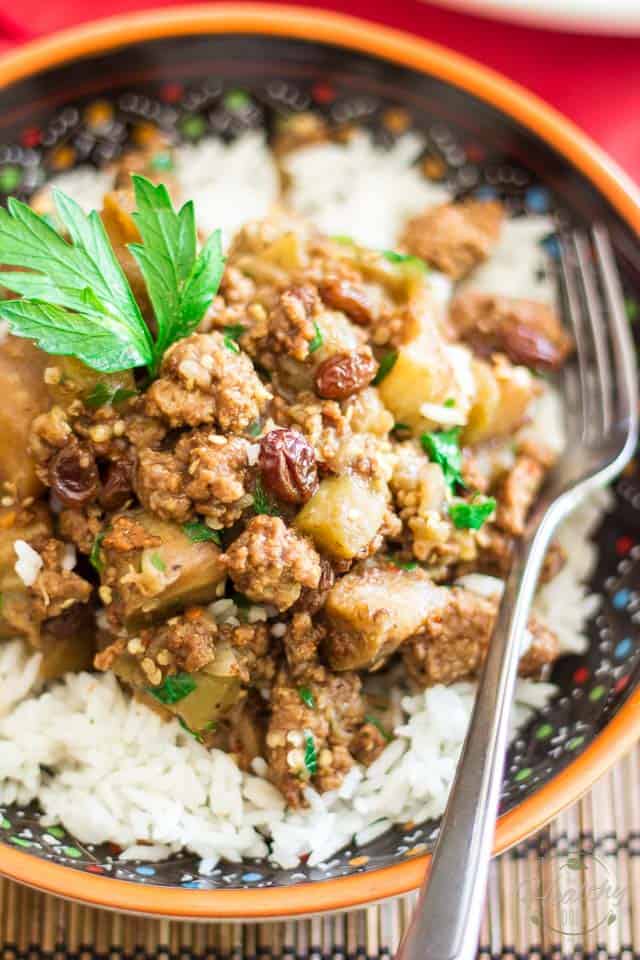 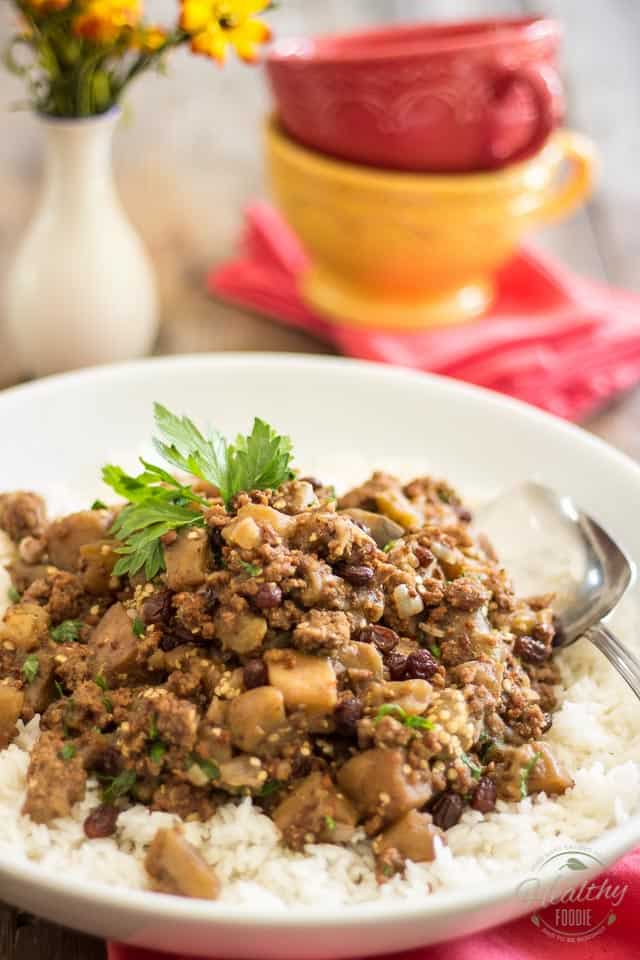