I’ll be honest with you, I barely even got to taste these lovely macaroons. I had half of one when I took the pictures and that was it. Not that I don’t like macaroons, far from there. In fact, I happen to LOVE them. But, let’s just say that they don’t sit all that well with my recent decision to go keto for a little while…

So why did I bother making them if I wasn’t even planning on eating them in the first place?

Well, first and foremost because I’d just purchased 3 fresh coconuts (yeah… I think I got a little bit carried away!) and they’d been staring me in the face for a couple of days. I’d been wondering what in the world I was gonna do with them when I suddenly remembered someone asking me once if I had a good recipe for macaroons made from fresh coconut.

HA! That sounded like a very good plan to me. Especially since I had a little family get together coming up where I knew I would easily find a bunch of happy volunteers to taste the goods for me.

And secondly, because well, you all know just how much I love to bake. In fact, I think I like the act of baking even more than I like eating the resulting creations. 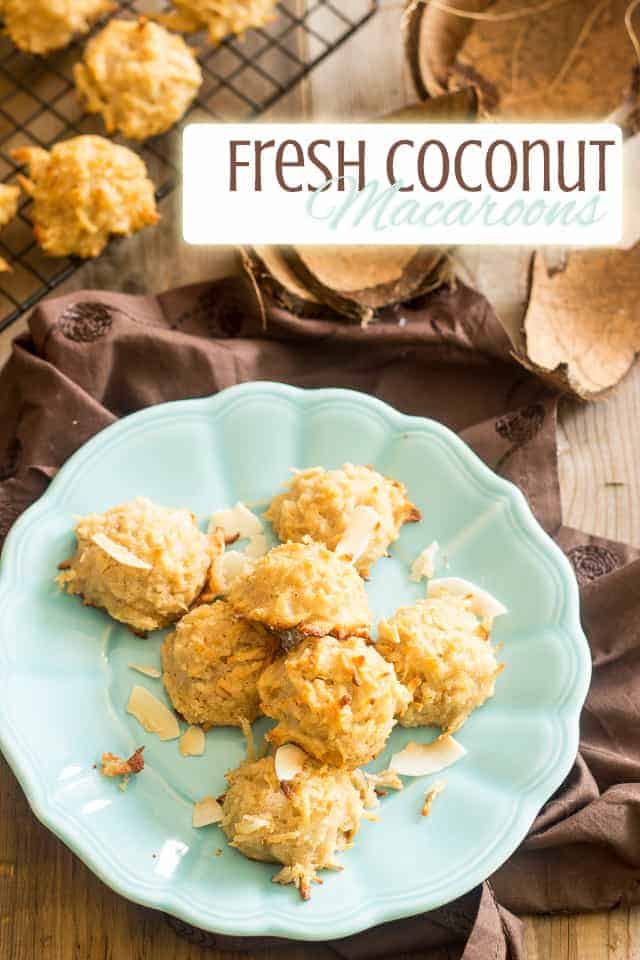 So anyways, I decided to try my hand at making Macaroons from Fresh Coconut and brought them to my family reunion. Well, the whole batch was gone before I even had time to consider *maybe* having *just* one, you know…

The critics were unanimous: the cookies were absolutely delicious. They had a nice, somewhat light and airy texture, yet they were plentifully sticky and sweet, just like a good macaroon should be. Even my mom’s boyfriend, who used to be my patisserie teacher, had nothing but good things to say about them. Now THAT I took as a major compliment!

That and the fact that every single reviewer expressed their appreciation with their mouths still full. 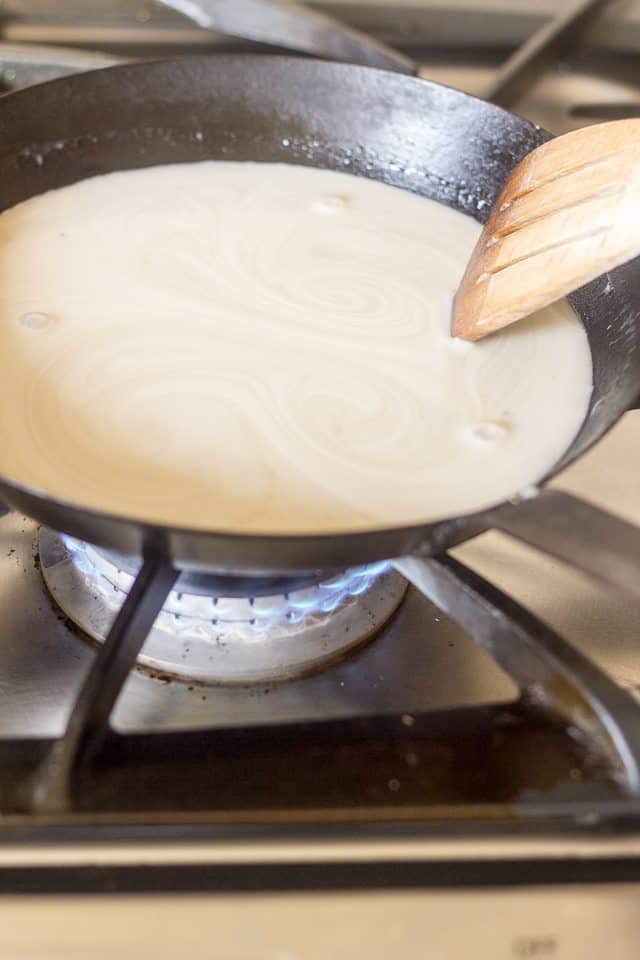 I know I’m including a lot of pictures here, probably more than is actually needed, but I really wanted you to get a good visual idea of what your coconut mixture is supposed to look like at various steps of the process.

To begin with, combine the coconut milk, honey, salt and vanilla in a large skillet set over high heat and bring to a boil while stirring constantly with a wooden spoon or spatula.

If you look closely at the picture above, you’ll see that the coconut milk and honey aren’t the best of friends just yet and don’t really feel like joining hands and becoming one. Don’t worry about it, though, just keep stirring. They will eventually warm up to one another and come together nicely. 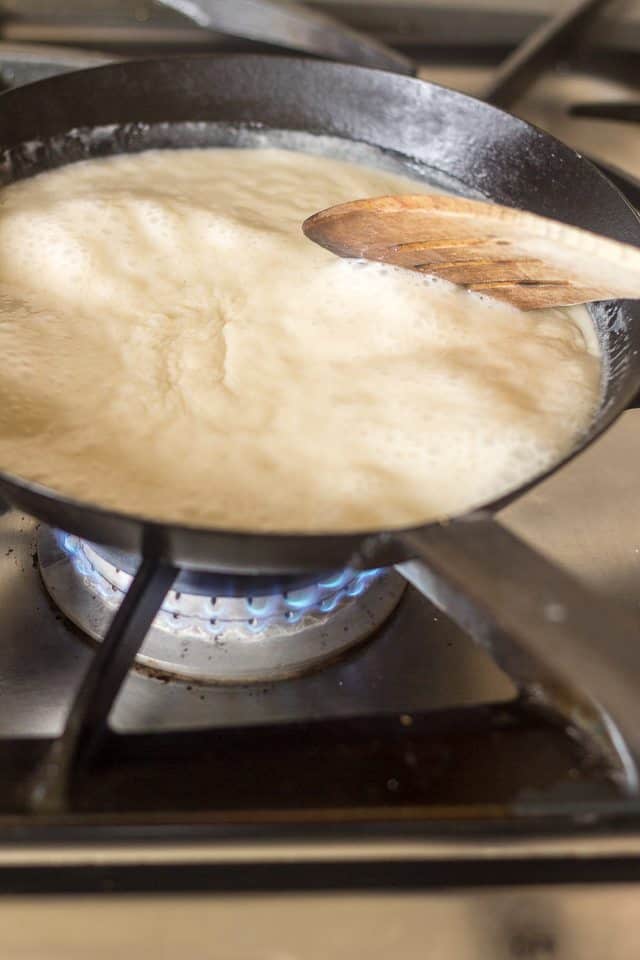 Now let the honey sweetened milk boil vigorously for about 4-5 minutes, until it starts to turn a light caramel color. 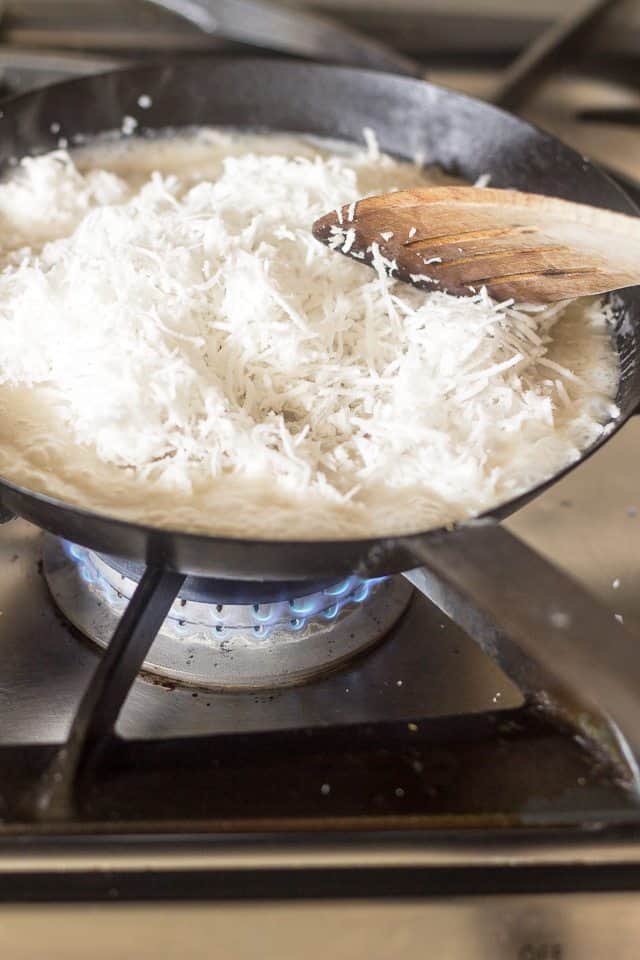 Now add the shredded coconut and mix it in really well. 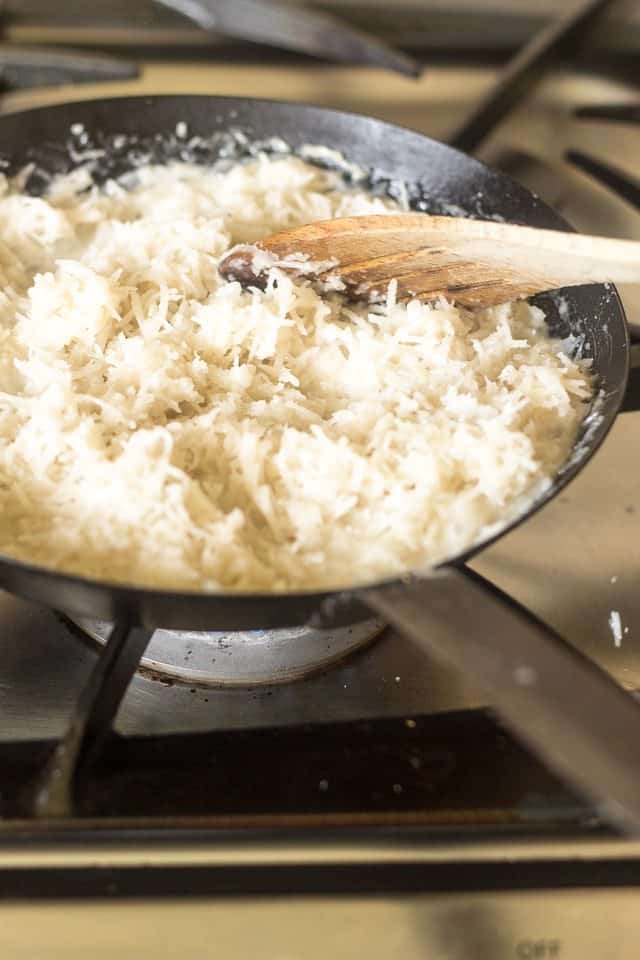 Initially, your coconut will stubbornly remain as white as snow and the mixture will be fairly wet, too. 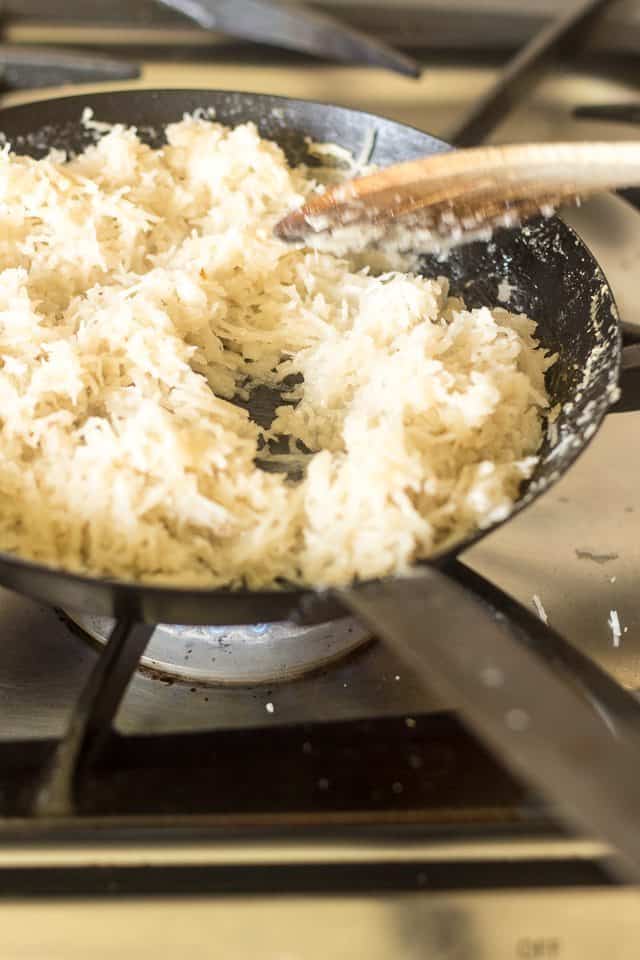 Eventually, that liquid will start to evaporate and the coconut mixture will become much thicker and stickier, too.

Slowly but surely, it will also start to color, if only ever so slightly… 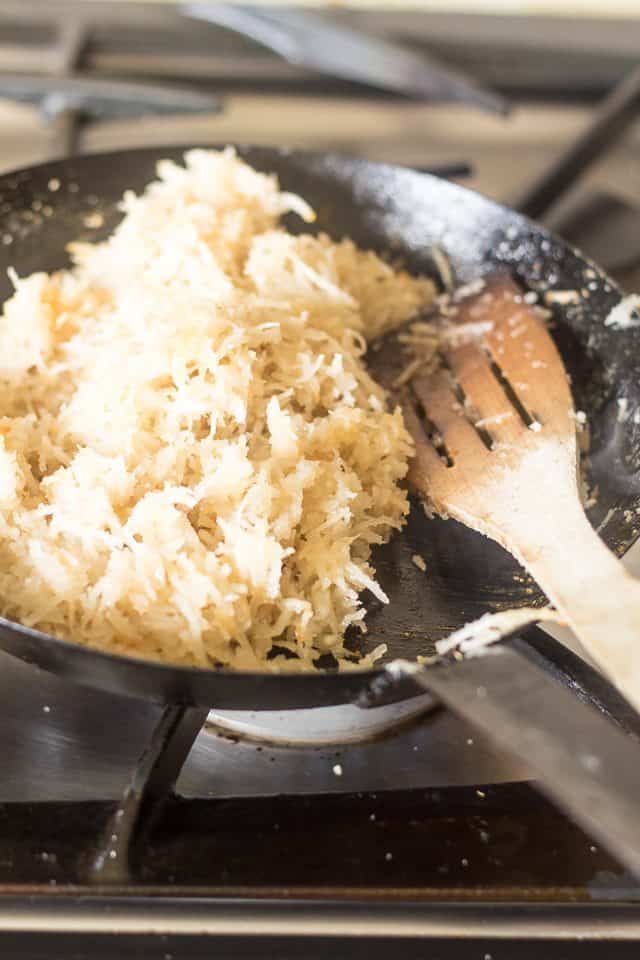 About 10 minutes in, the mixture should start getting really sticky and you might be tempted to stop, but the color isn’t quite where we want it, yet.

Just keep cooking and stirring. A beautiful caramel color and toasted flavor is what we’re after. 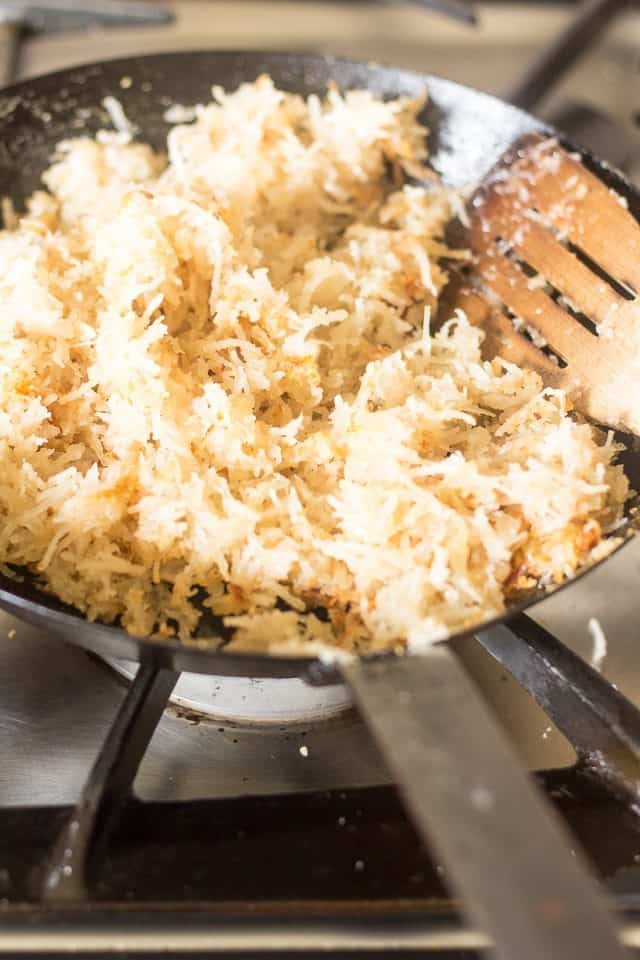 HA! That’s what we’re looking for. See how the coconut is starting to stick to the pan a little, leaving beautiful chunks of caramelized coconut as you stir?

OH! That’s yummy goodness for ya. And by now, this stuff smells sooooo good, it’s enough to make you lose your mind. I really wish I could include little “fragrance thumbnails” in my posts, sometimes. Too bad that technology doesn’t exist, I would totally share.

Movin’ on (and away from the smell…) kill the heat, set that aside and give it about 10 minutes to cool. 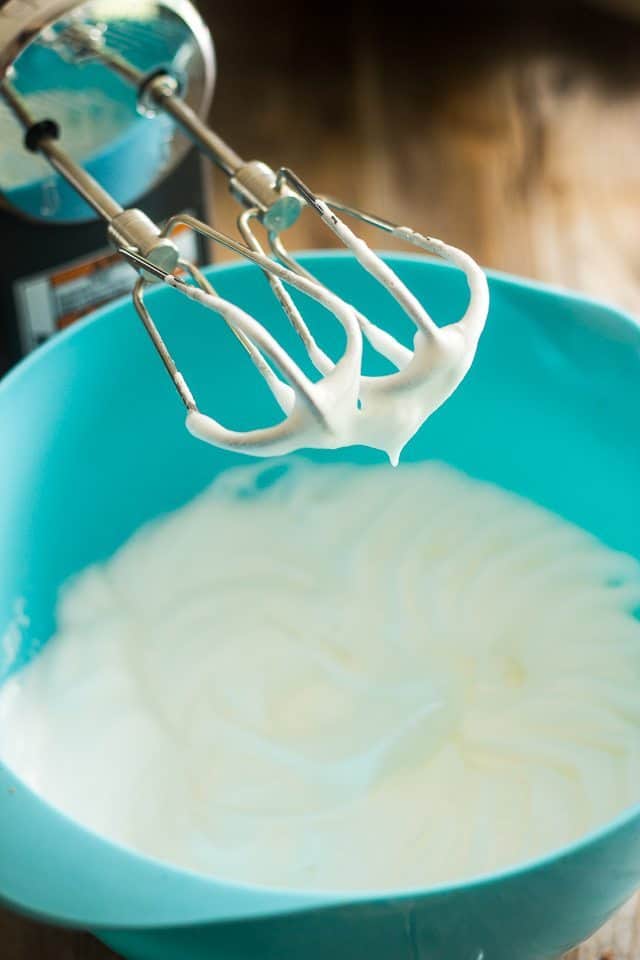 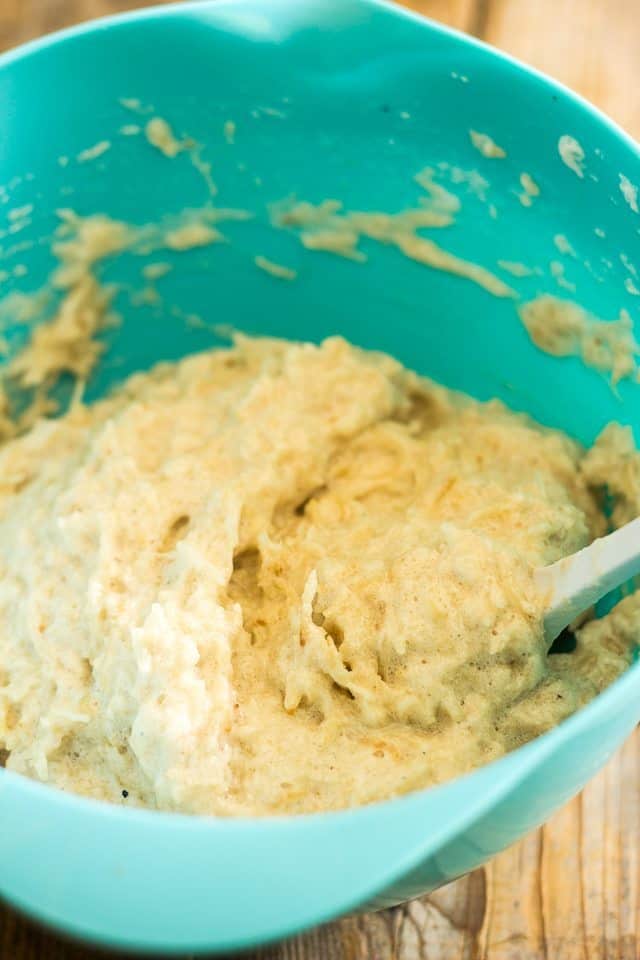 Delicately fold the coconut mixture into the egg whites. Be gentle enough to leave plenty of air in those whites but you still want your batter to be extremely well combined, so do stir it well. 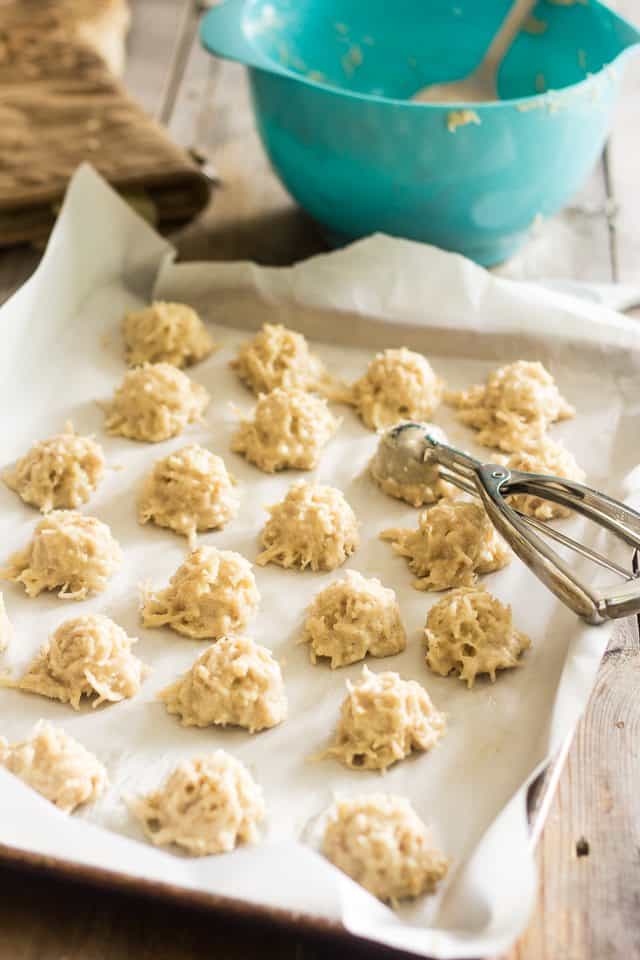 Drop the batter by the the tablespoonful onto a baking sheet lined with parchment paper. As always, I find that a small ice cream scoop is the perfect tool for this!

Bake these in the oven for 20 minutes and then let them cool completely.

In fact, these are much better when they’re completely chilled, so I strongly recommend that you stick them in the fridge and patiently wait for them to cool before you indulge. 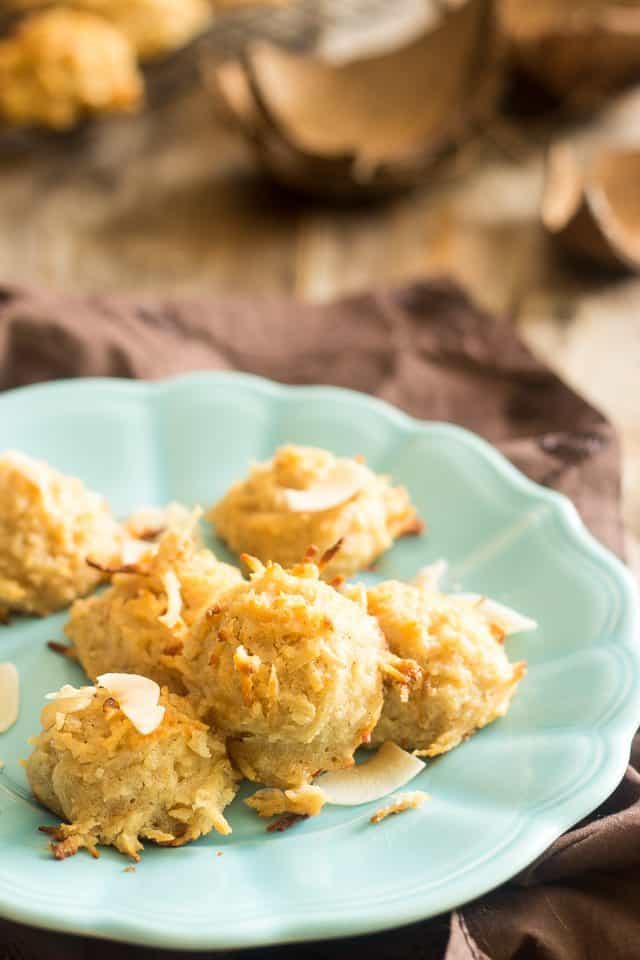 Now I know some of you are probably wondering: can we do these with dried coconut instead of fresh? Well, the honest answer is: I have no idea, for I haven’t tried it… yet! I’m thoroughly planning on testing that theory, though, so I will keep you posted.

In the meantime, if you want to give them a try using fresh coconut but don’t exactly know how to tackle the beast, check out my video on How to Crack Open a Coconut Quickly, Easily and Painlessly. You’ll become a pro at it in no time, I swear!

Plus, I dunno… fresh is just so much better! It’s totally worth the effort, I swear. 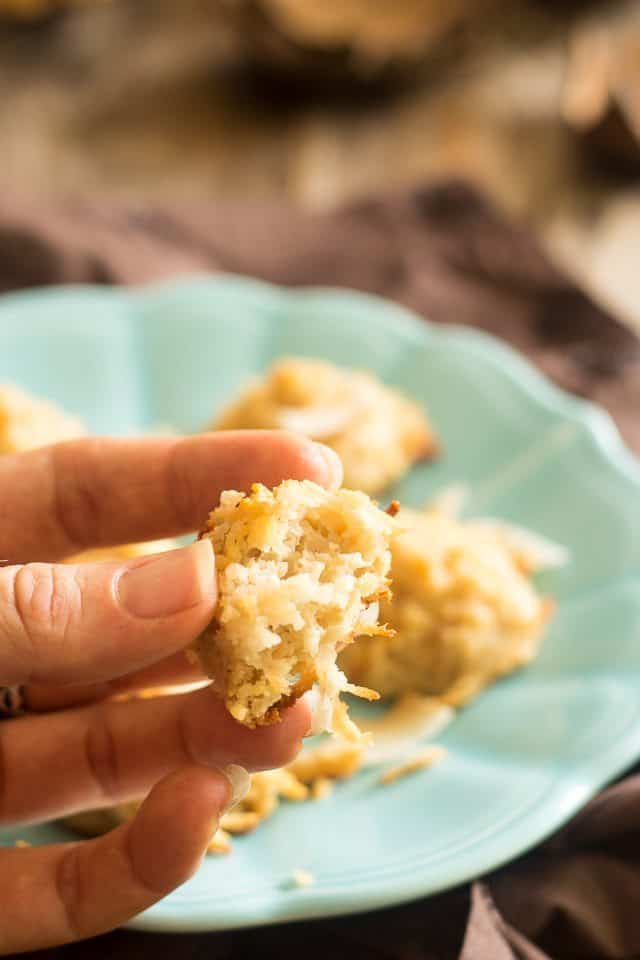 In closing, I present to you Exhibit “A”. Right before your eyes is the *one* piece of cookie that made it to my mouth.

I must say, it felt really good while it lasted!

A moment of pure bliss… 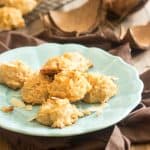 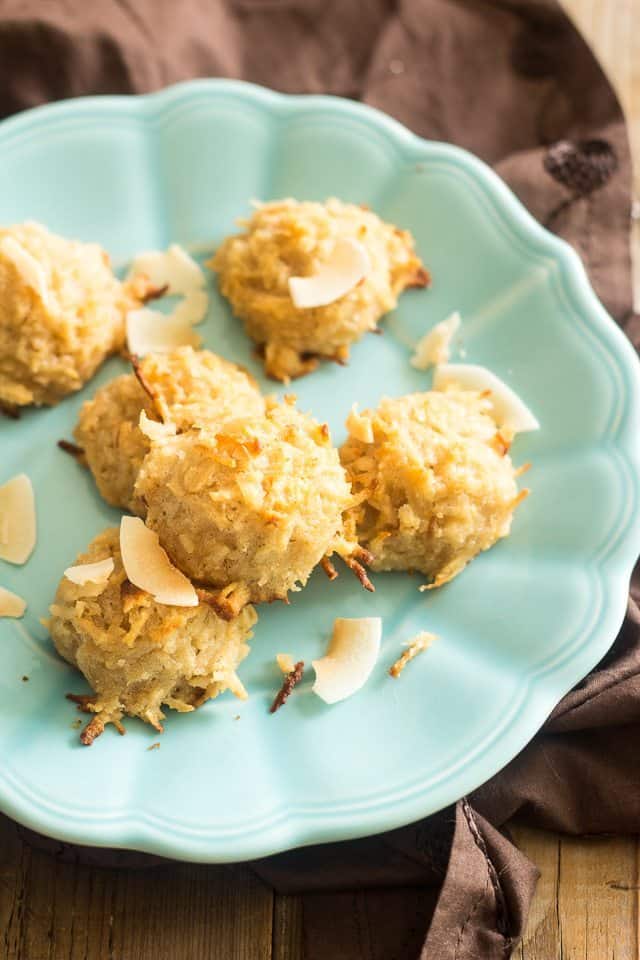 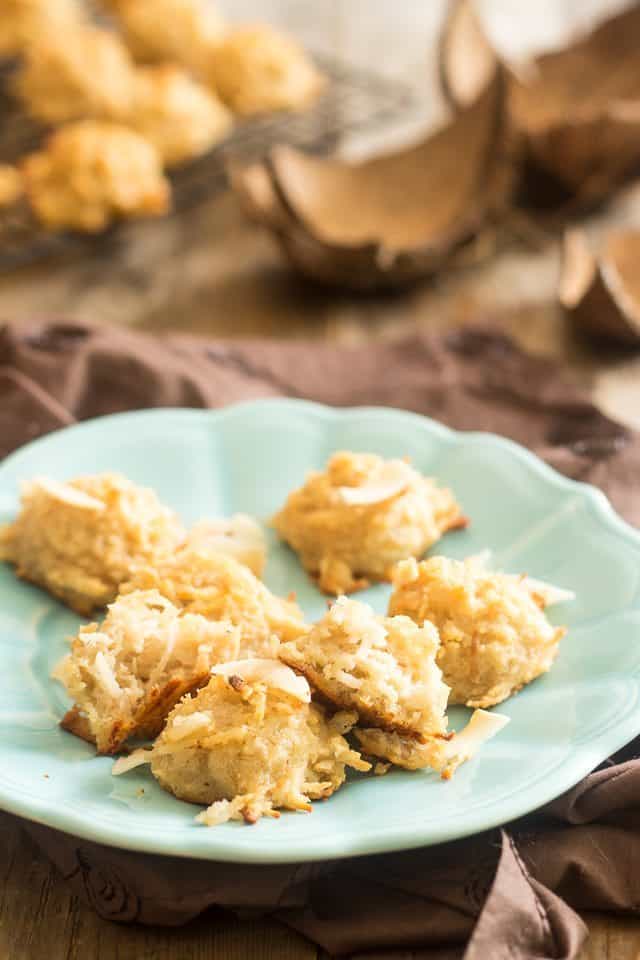