These Rosemary and Sesame Paleo Crackers are so tasty, you hardly have to put anything on top of them. You’ll probably want to pop then like potato chips! 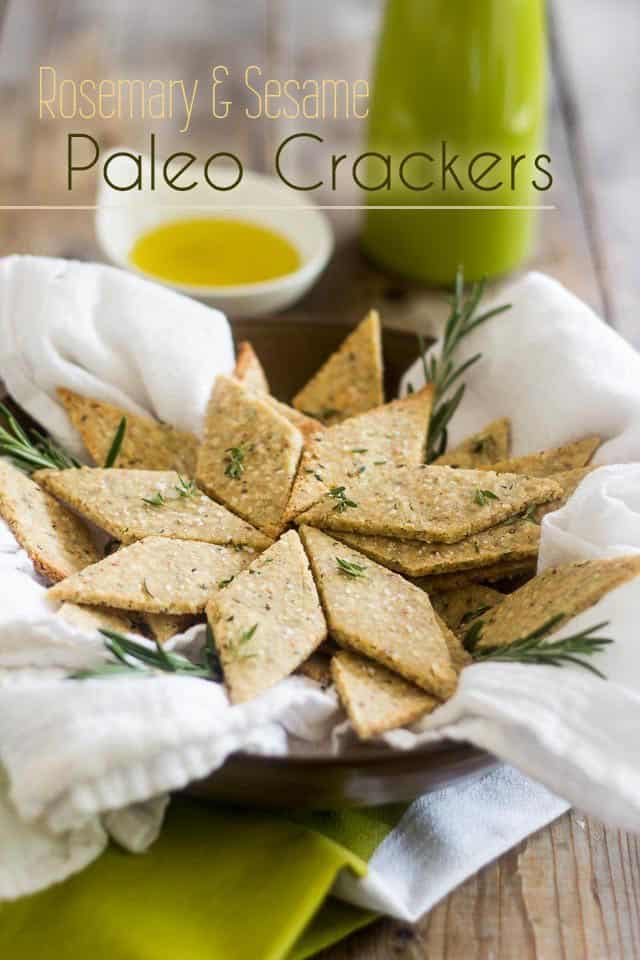 I’m not normally one to get out of my way for crackers… I sort of see them as boring, dry, tasteless and overall uninteresting.

Since making the switch to paleo, they were never really something that I truly missed. Except lately, after making this delicious Preserved Lemon and Olive Tapenade, a batch of Homemade Head Cheese, some Deliciously Silky Liver Pâté and more recently trying my hand at making Fresh Farmer’s Cheese (recipe to come), I dunno… I sort of felt the need to mound those goodies on top of some kind of cracker.

It didn’t take long before I decided that it was time for me to give homemade-paleo-cracker-making a try. I searched the Net for a recipe that would tickle my fancy and opted for these Garlic Herb Crackers which I found over at Paleolland. <– Very nice blog, by the way. I say you should totally check it out! Later, though. Once we’re done making my version of Sjanet’s crackers.

Of course, I had to make a few modifications to the original recipe and ended up making Rosemary and Sesame Paleo Crackers instead. All I can say is WOWSERS! These things have so much flavor, you don’t even need to mound anything on them… and they are so very moreish, you’ll probably have to keep them under lock and key and have a neighbor hold on to that key for ya… 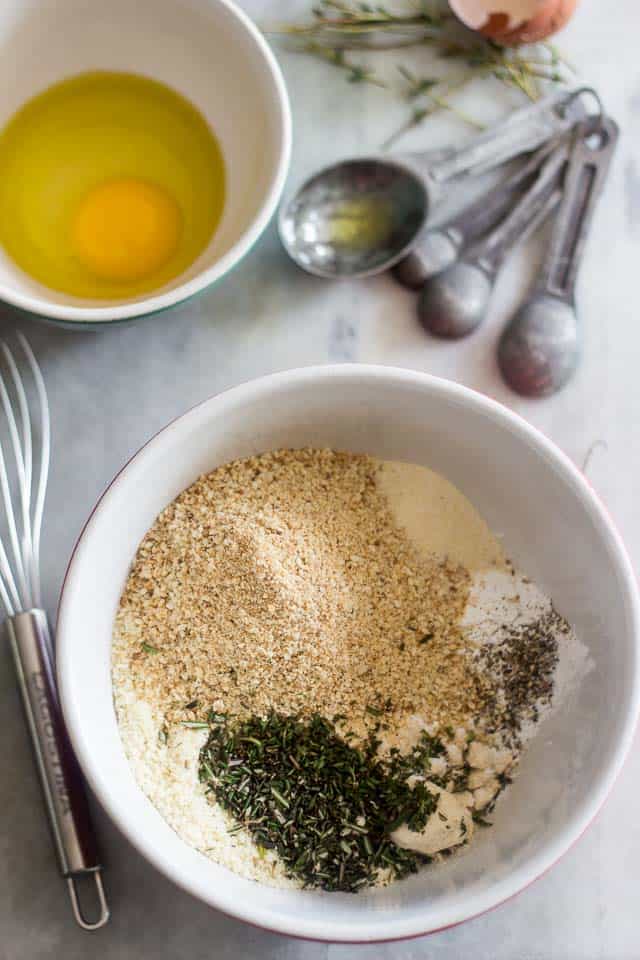 I loved the idea of adding sesame seeds to my crackers, but didn’t really care for adding the whole seeds in there. I thought I would grind them and turn them into some kind of a coarse flour instead. A highly tasty coarse flour, that is. For I also decided to use toasted sesame seeds.

Use either a mortar and pestle or coffee grinder to grind the seeds, then transfer them to a large mixing bowl. Add some almond flour, coconut flour, tapioca starch, onion powder, chopped herbs, salt and pepper and mix all this with a flat whisk until very well combined. 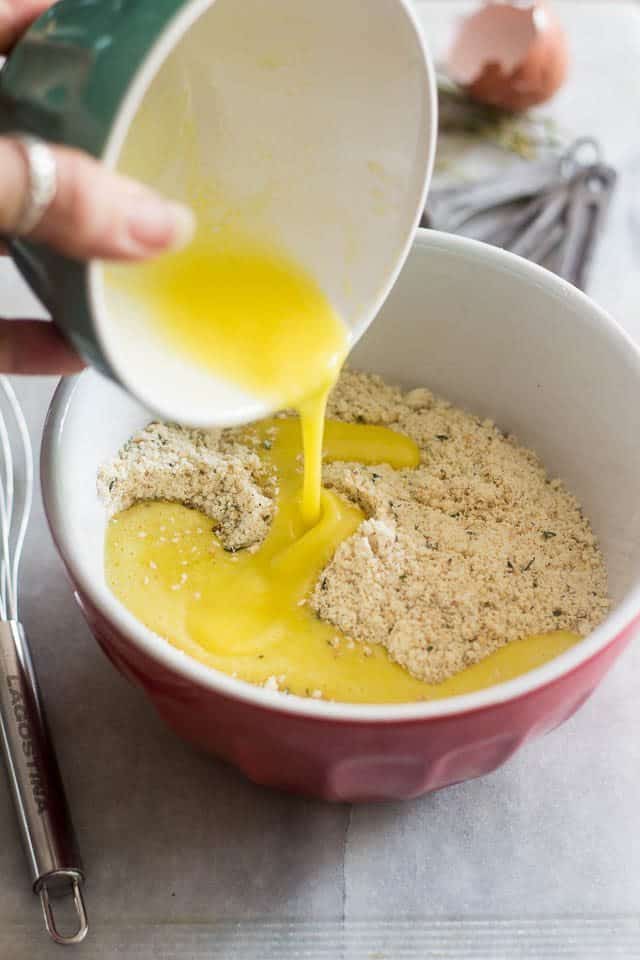 In a separate bowl, add the eggs and olive oil and whisk until slightly frothy. And yes, that’s eggs with an “s”, as in more than one egg. I know the picture above shows only one, but it turned out not being enough and I needed to add an extra one, as well as an extra tablespoon of extra-virgin olive oil. Seems like I’d underestimated the power of absorption of coconut flour.

So whisk the eggS and olive oil and pour this right over the dry ingredients. 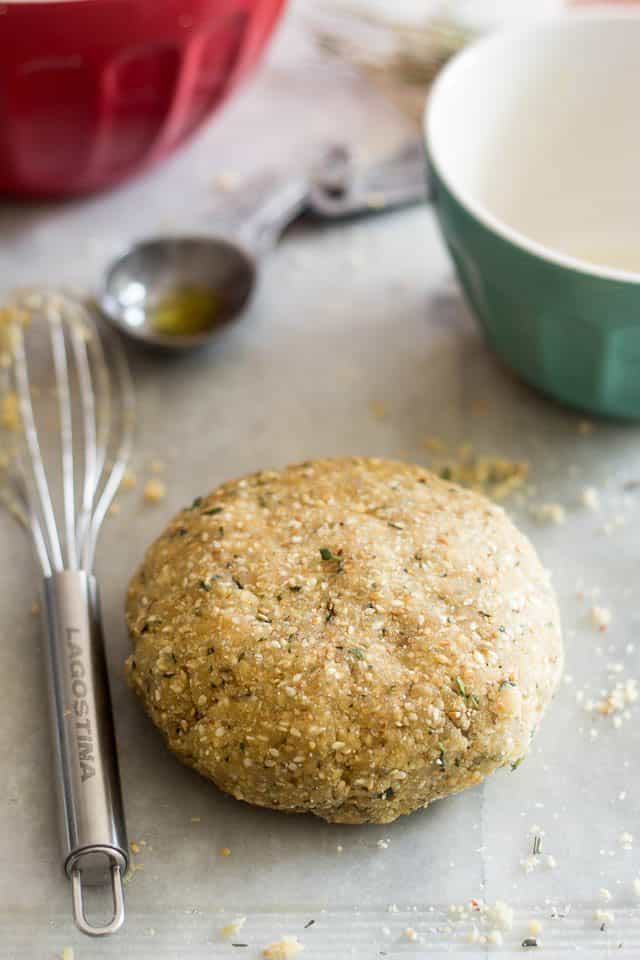 Knead with your hands until a dough forms, and then shape that dough into some sort of a thick disk. 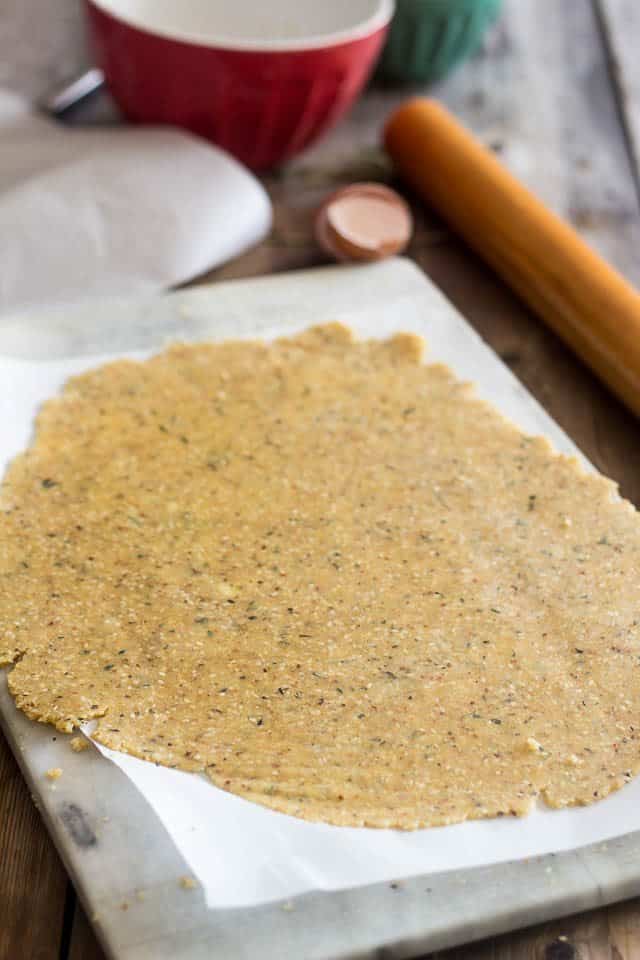 Place that disk between two sheets of parchment paper and roll it out to a thickness of about 1/8 of an inch.

Make sure that you roll this as evenly as possible. By the way, have you ever tried one of those handleless rolling pins? They are simply the best I tell you. I fell in love the very first time I got to work with one and never looked back! 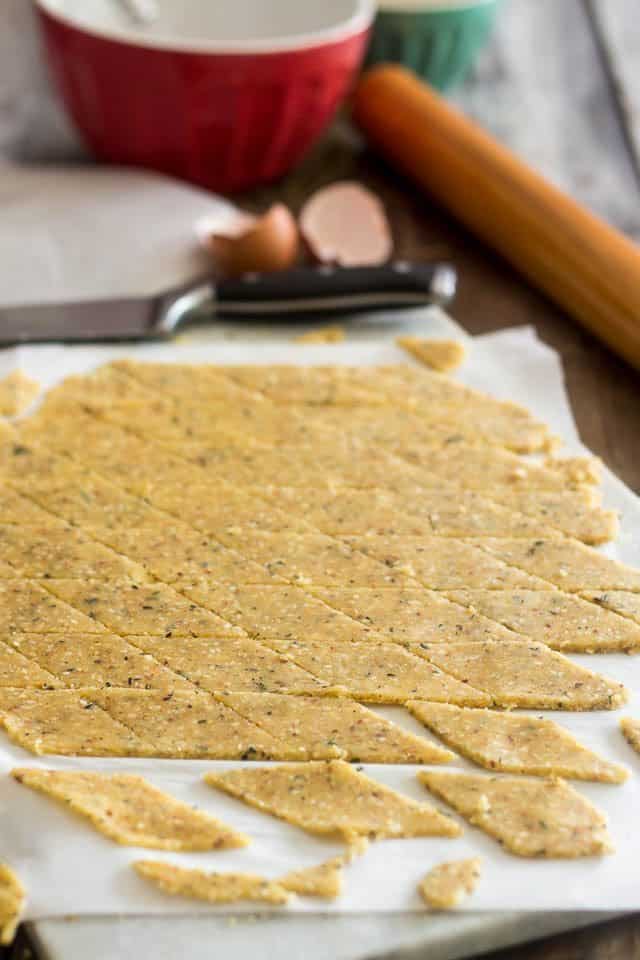 Once your dough is all good and rolled, remove the top sheet and, with the help of a sharp knife or pizza wheel, cut it into about 40 crackers.

I chose to shape mine as lozenges, but you could very well make squares, rectangles or even triangles if you wanted to! 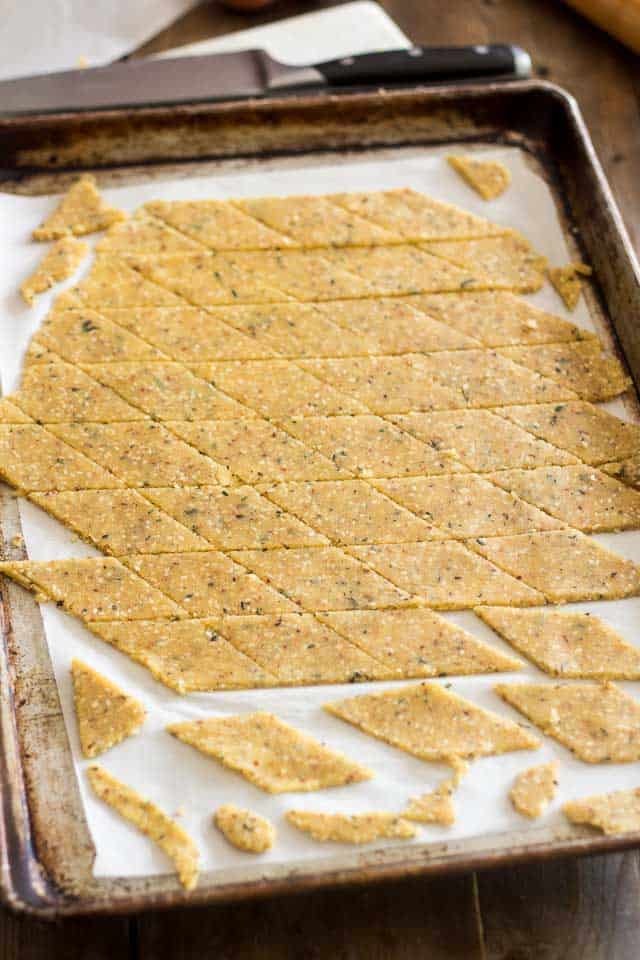 Now you want to slide the crackers right onto a baking sheet. To do that, just grab on to one end of the parchment paper and slide the whole rig right into the baking sheet, without moving anything.

Place your crackers in the oven and bake ’em for about 12 to 14 minutes or until bubbly and golden brown. 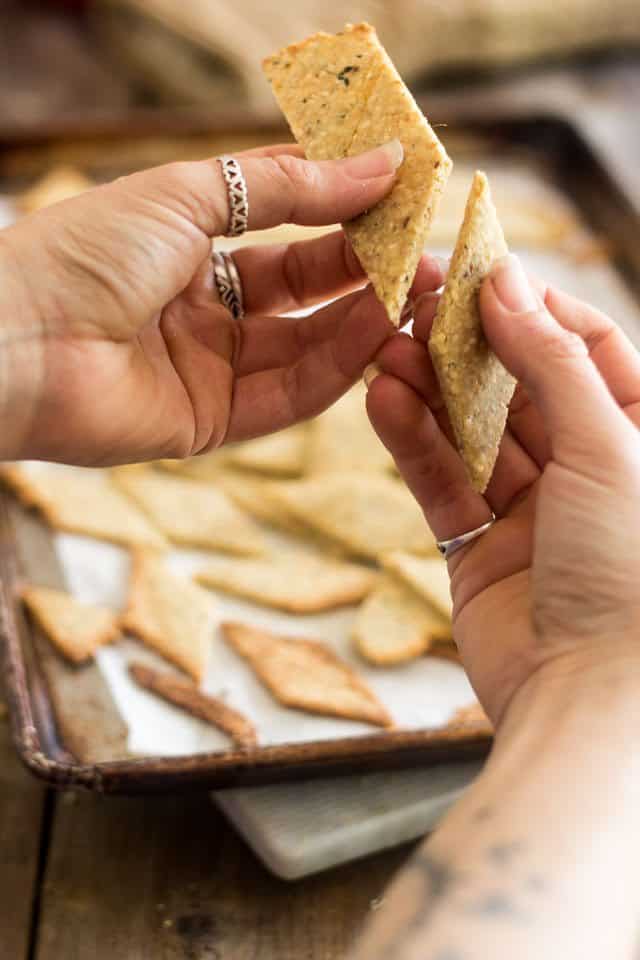 Take the crackers out of the oven and allow them to cool completely, which should take about 25 to 30 minutes. You’ll then be able to separate the crackers by simply snapping them between your fingers.

Now that part is so cool, you’ll probably want to make another batch just so you can snap some more! I think it’s even more fun than busting bubble wrapper… oh yeah! 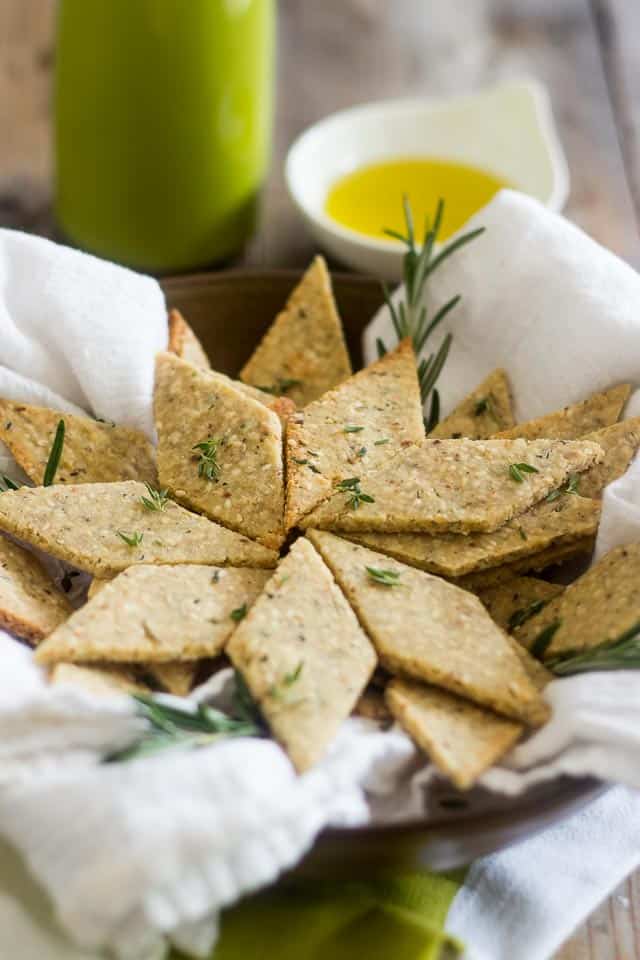 Your crackers will keep for a couple of weeks if stored at room temperature in an airtight container, but I don’t think you’ll be able to make them last that long…

You know what they remind me of? Sesame sticks. Oh man, are those ever good, and so addictive, too! HA! now that has me wanting to try and make some paleo sesame sticks. I’m sure I could pull it off.

So what say you? Should I give ’em a go? 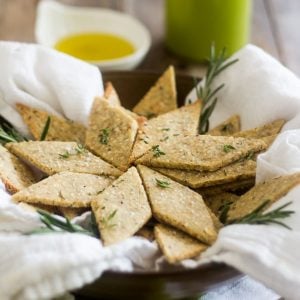 Prep Time: 25 minutes
Cook Time: 15 minutes
Total Time: 40 minutes
These Rosemary and Sesame Paleo Crackers are so tasty, you hardly have to put anything on top of them. You'll probably want to pop then like potato chips!
Servings: 40 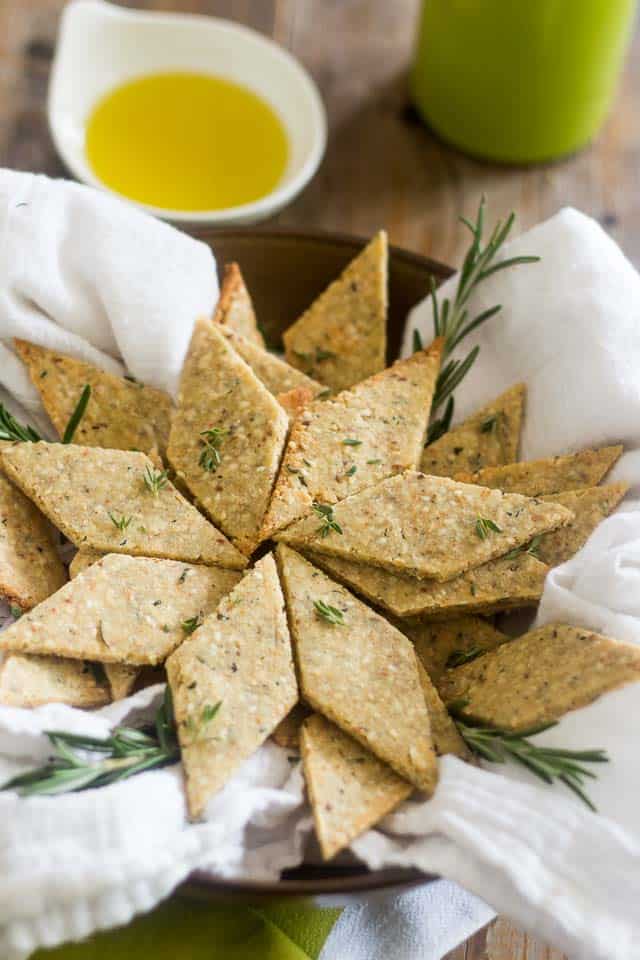 posted by Sonia! The Healthy Foodie on September 20, 2014