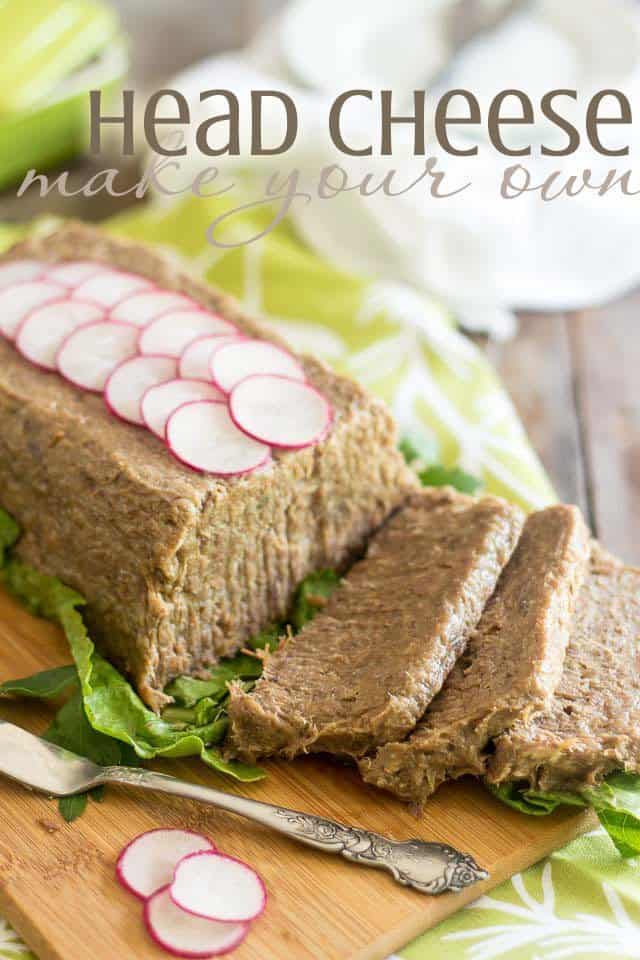 Of all the recipes that I made until now, if there was one that I really wish my dad could’ve tasted, this would be the one.

He was such a huge fan of head cheese! You should’ve seen the look on his face when my mom returned from the grocery store and he would retrieve a jar of the stuff from the bags as he helped unpack. He looked like someone had just told him that he’d won the lottery or something!

I’m absolutely positive that he would’ve said (and meant) that this Homemade Head Cheese was the best he’d ever tasted. 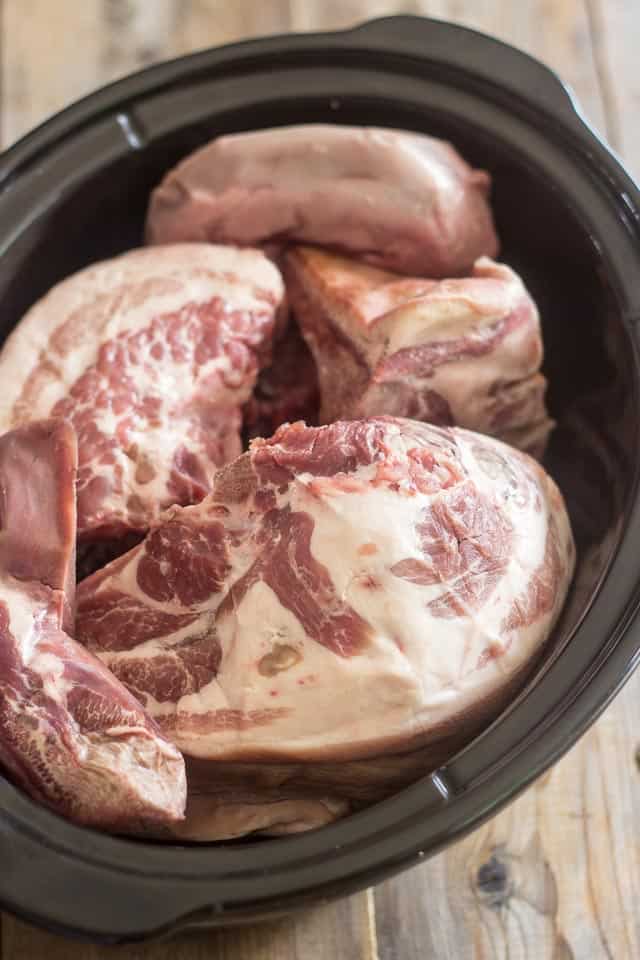 To be honest, I’d been wanting to make this for a very long time now, but kept putting it off because I was very afraid to face the actual pig’s head. It had been sitting in my freezer since I’d purchased my side of pasture raised pork. The thing is, I had no idea of what to expect when I’d cut open this neatly wrapped package.

Pfft. Had I known! See those beautiful pieces of meat up there? That’s my pig’s head, along with a couple of tongues. Looks like the butcher had taken the liberty of cleaning that head for me: he removed the eyes, brains, ears, facial features and all the stuff that I didn’t really care to see. Heck, he even went ahead and cut it into manageable pieces. In fact, one could barely tell that this was even a head to begin with.

Boy was I grateful for that. And you know what? I’m sure that if you ever decided to purchase a hog head and asked your butcher nicely, he would gladly clean it up for you like that.

Oh, he might ask for a small monetary compensation, perhaps, but I’m sure it would be very minimal and totally worth it. After all, pork head isn’t all that expensive to start with, and the meat that it conceals is so freakishly tender and delicious! Especially after it’s been slow cooked like this.

So what say you? Will you dare try it? At least, take a peek at the entire process, then you can decide for yourself. 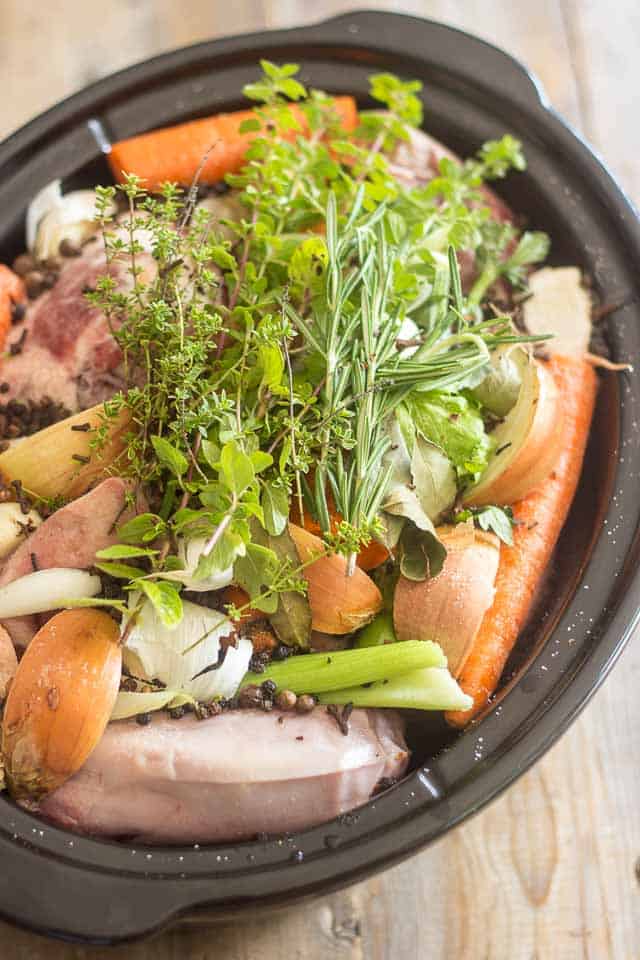 You’re not even gonna have to work that hard, I swear.

To begin with, place your meat, veggies and aromatics into a 6 quart slow cooker and cook on low for 20 to 24 hours.

The long cooking time will ensure that you extract as much nutrients as possible out of all those bones and fat. 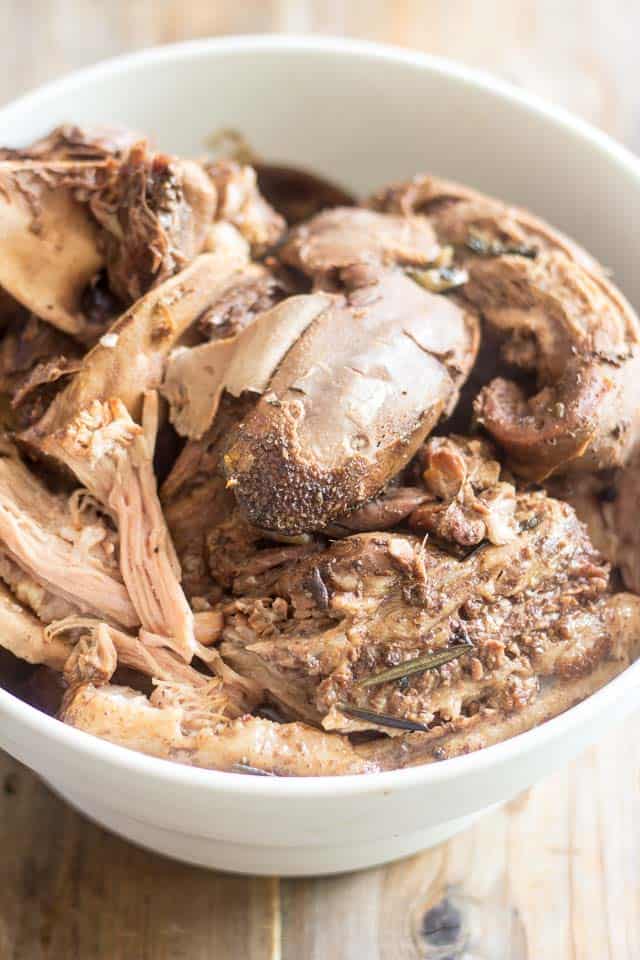 Once the meat is done cooking, carefully remove it to a large bowl to collect the juices.

See that chunk of meat right in the middle? The one with the little dimple on it? That’s a tongue. Doesn’t look so scary, does it? And it’s pretty much all meat, too. The only thing with tongue is that it has this thick skin that covers it, and that has to be removed.

Frankly though, it removes just as easily, and fairly similarly too, as chicken skin does. 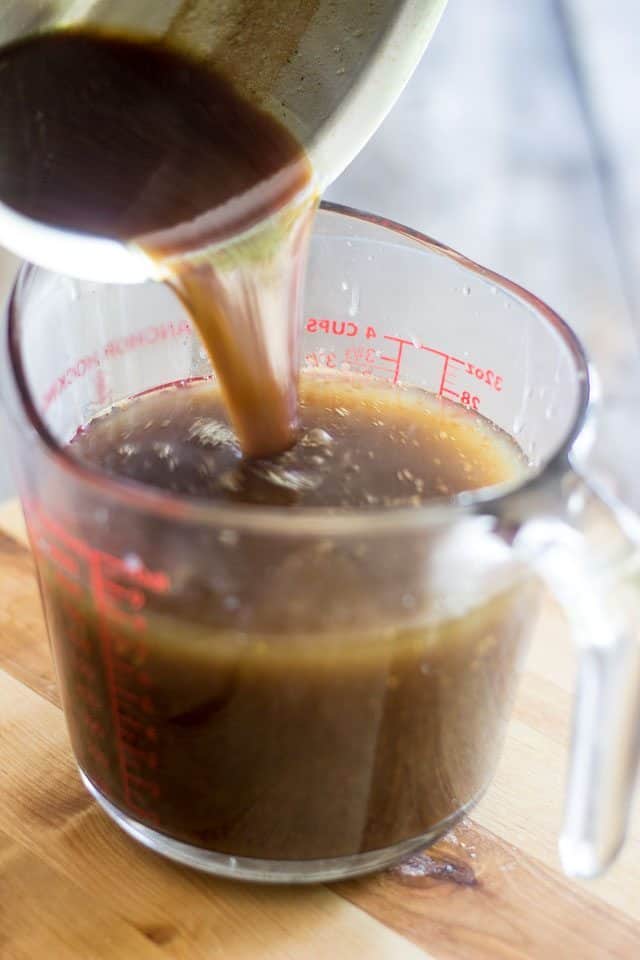 While the meat is cooling some, pass the broth from the slow cooker through a colander and then transfer it to a medium saucepan. Bring that broth to a simmer over medium heat and let it reduce until there’s only about 4 cups left. 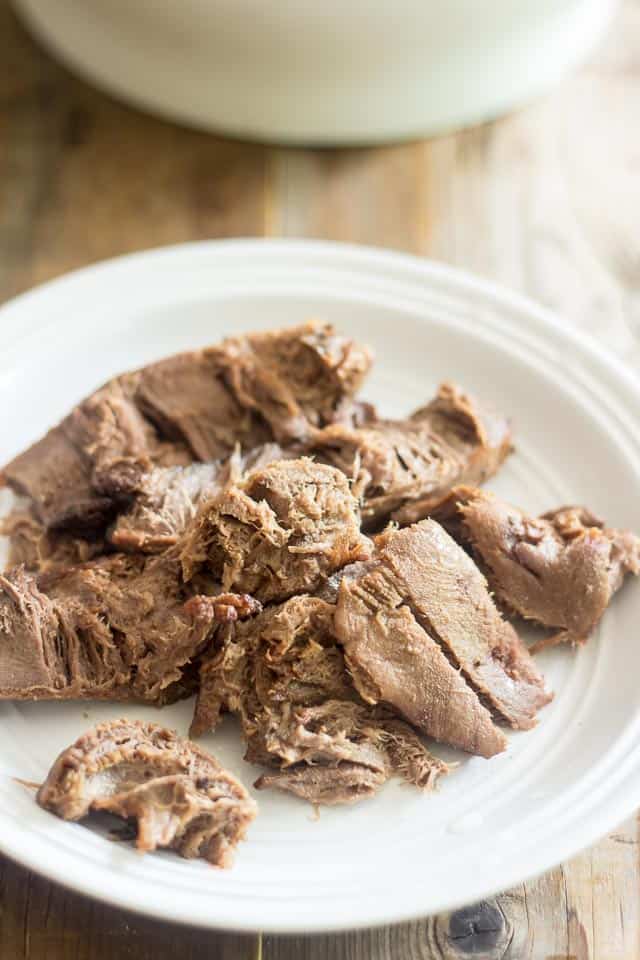 Meanwhile, carefully pick the meat from the head and tongue and discard everything that’s not obviously meat.

This is the meat from the tongues alone. Like I said, basically all that needs to be done with tongue is remove the tough skin that covers it. The rest is all beautiful meat like this. 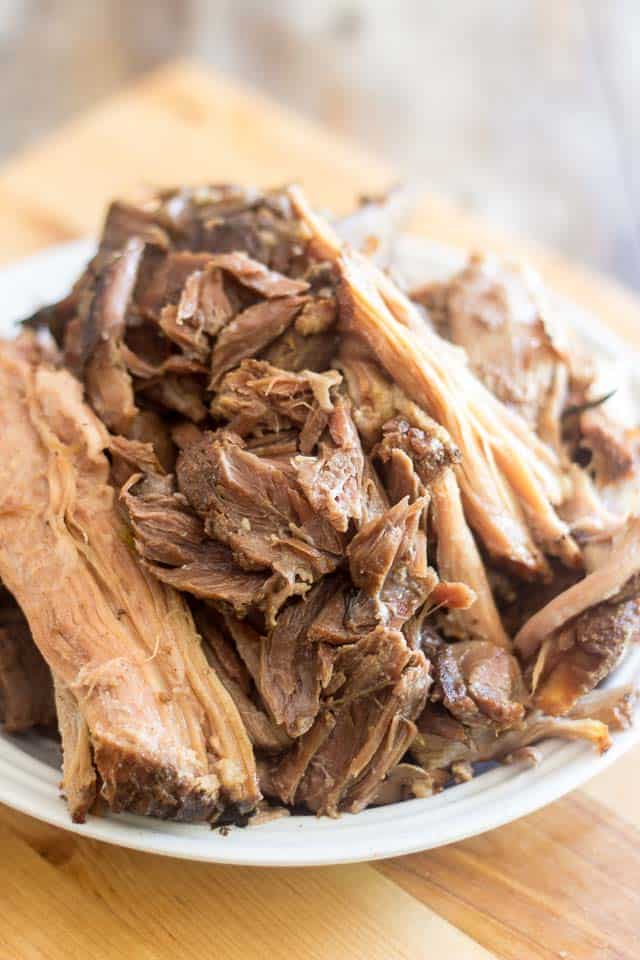 And that is the meat that I got to pick from the head. Can you get a feel of how tender and juicy that is? I’m telling you, if you didn’t know this was head meat and someone served it to you as pulled pork, you would DEVOUR it in seconds. It’s freakishly delicious, I swear!

When all your meat has been carefully retrieved, you may want to pass the bones and fat through a colander to collect all the precious juices that will have released during the picking process and then add those to the ones that are already in the saucepan. 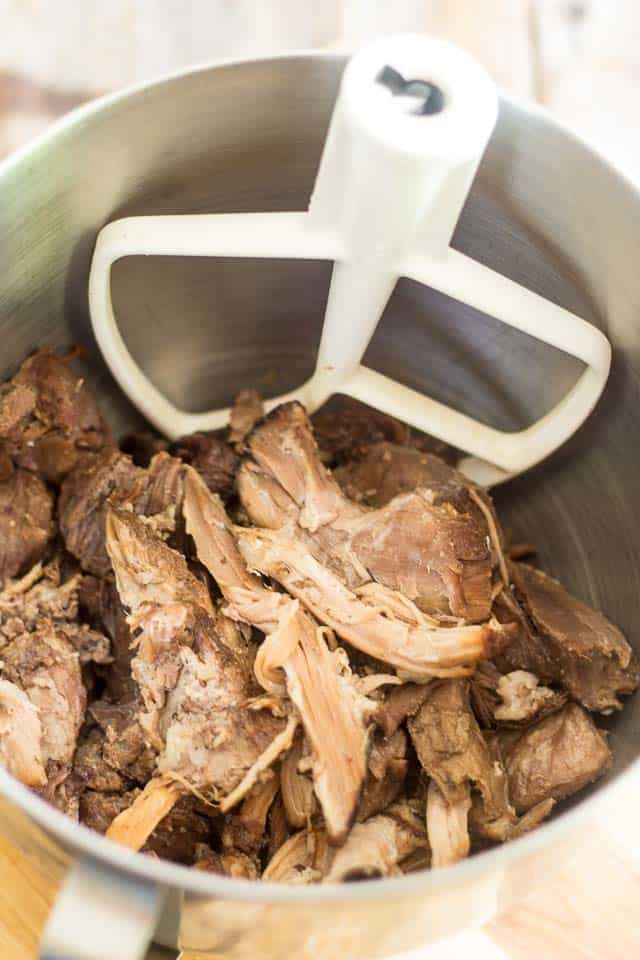 If you have a stand mixer, we’ll put it to good use right about now. Equip the paddle attachment and place all the meat right into the bowl 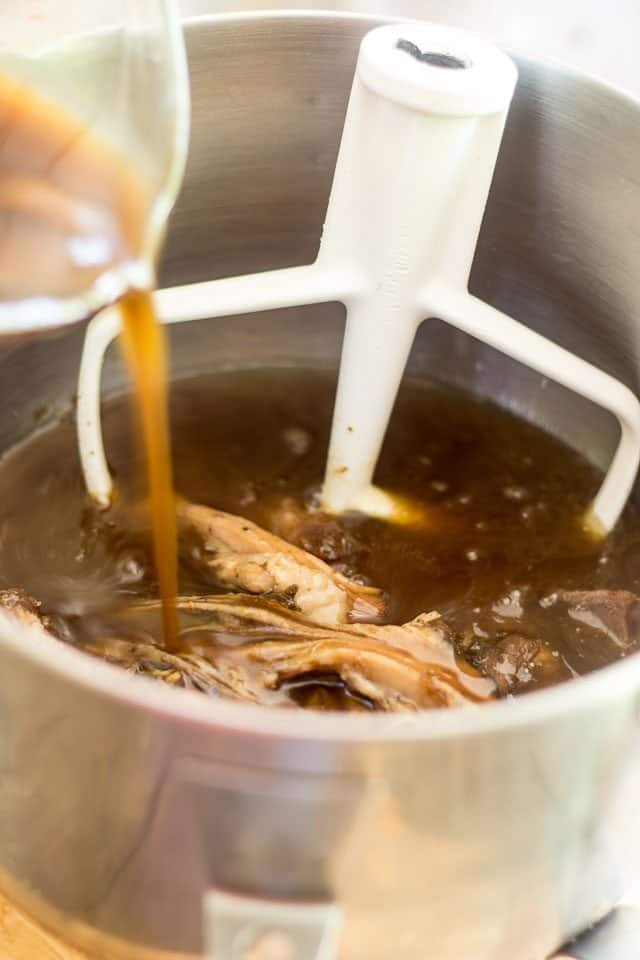 Add reduced broth and mix on low speed until the meat gets finely shredded and the mixture is evenly combined.

Now it’s very important that you do this ON LOW SPEED, else you’ll send broth and meat flying all over the place and this will be a messy operation, trust me.

Slow and low, baby, that is the tempo! 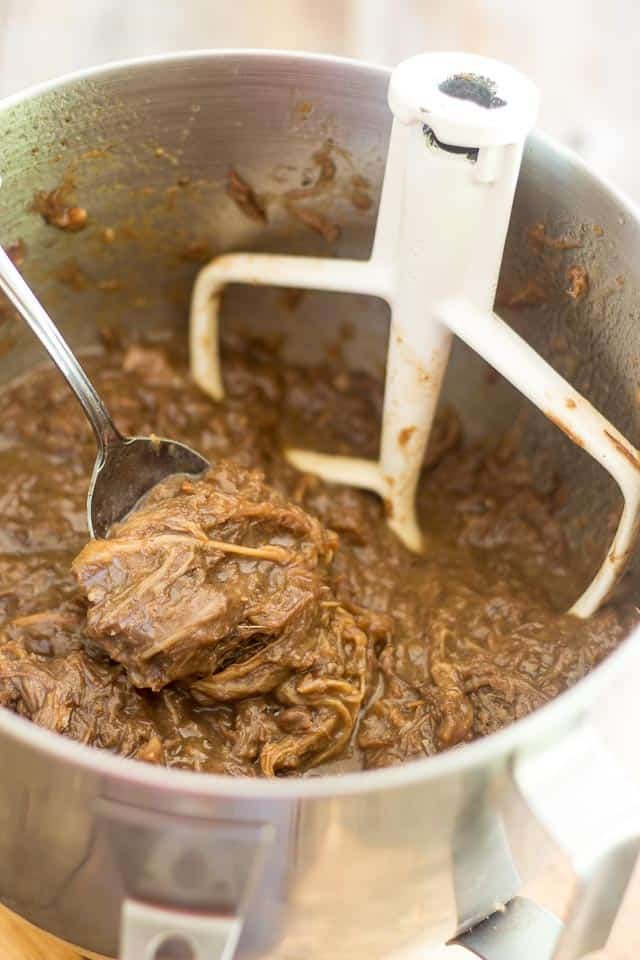 This is the kind of final texture you should be looking for.

Alternatively, if you didn’t own one of them fancy  stand mixers, you could pull the meat by hand using 2 forks (like you would if you were making pulled pork) and then mix the broth right in with a large spoon.

The final texture won’t be quite as delicate and creamy, but it will taste just as good. 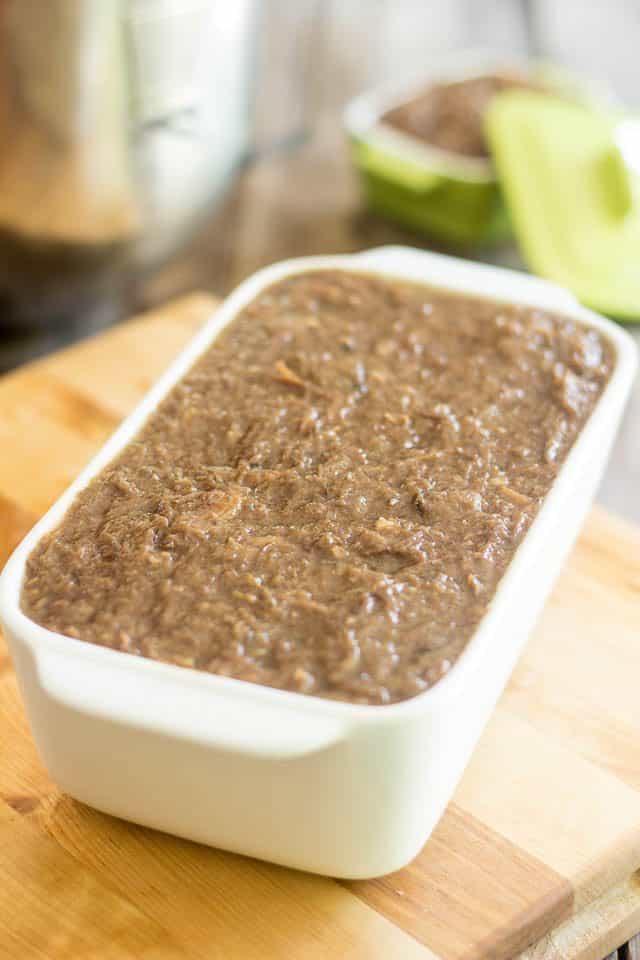 Pour the meat mixture into a greased loaf pan or terrine mold (you could also use several individual ones if you preferred) and refrigerate overnight. 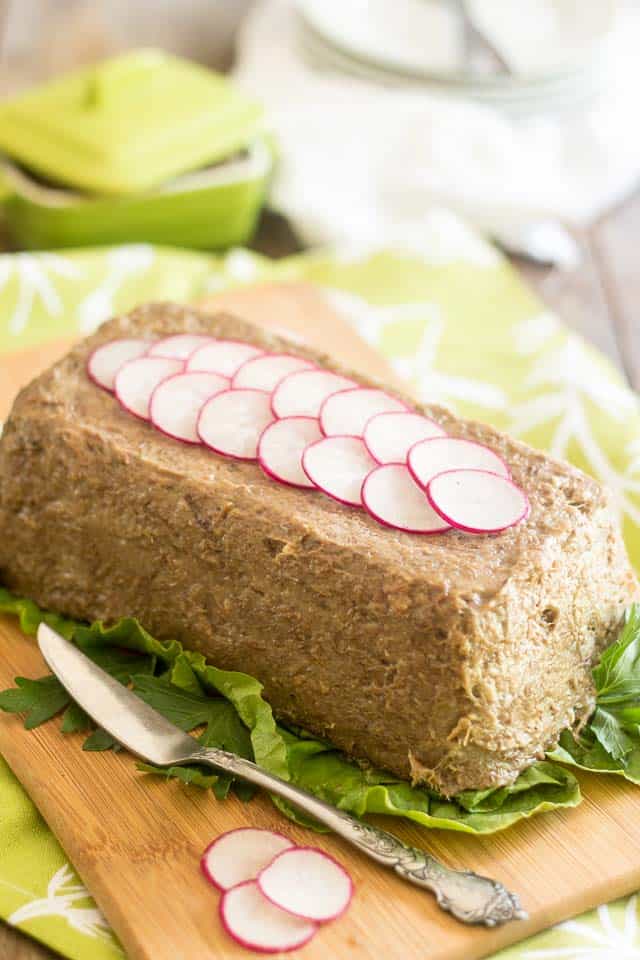 To unmold, delicately run a thin blade around the terrine then slightly warm the bottom of your mold by dipping it in hot water for a few seconds.

For even easier unmolding, line your pan with plastic film like I did with when I made this Salmon Terrine. It will leave a few fine lines and wrinkles but your head cheese will come out of there like a charm! 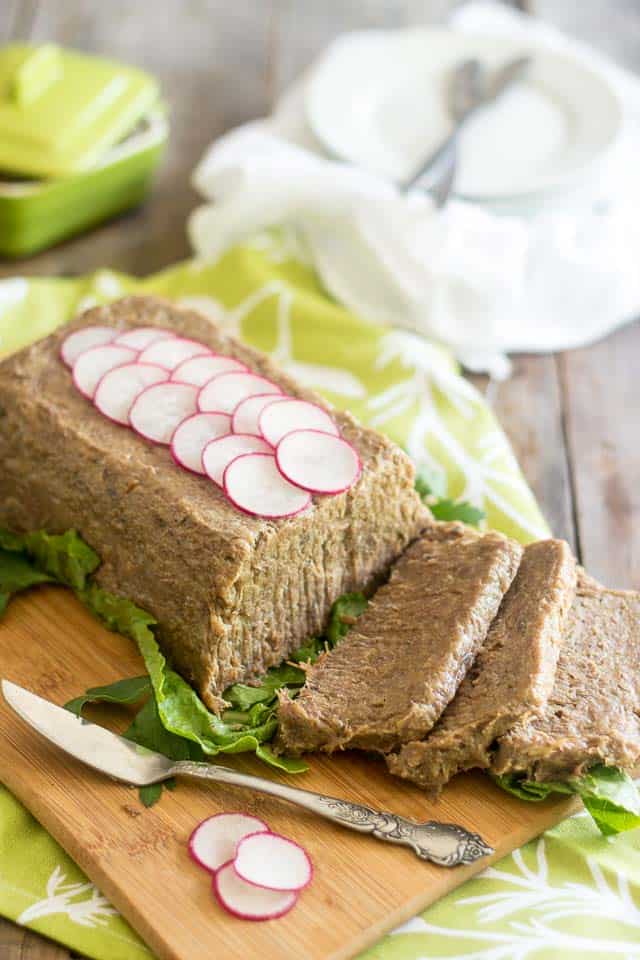 Invert your head cheese onto a plate or wooden board and garnish with fresh greens. Wouldn’t that look nice on a brunch buffet table?

Or, like I said earlier, you could also use little individual molds and serve the head cheese right in them. 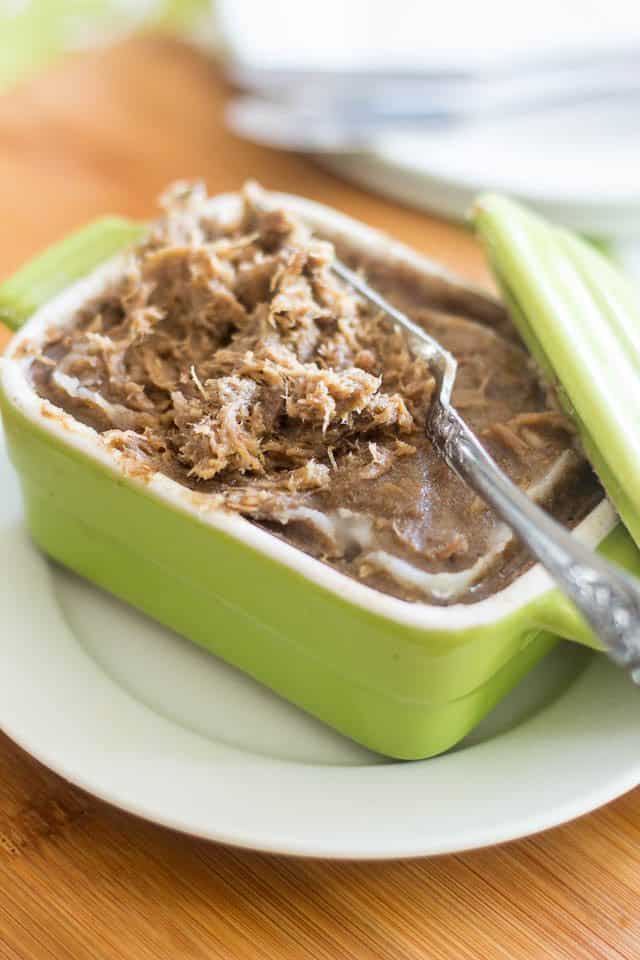 Now that I’ve successfully made my very own head cheese, I’m left with one tiny little problem. I really want crackers to spread it on… Real thin and super crispy crackers.

Guess there’s only one thing left to do: find me a good paleo cracker recipe!

Or better yet, come up with one.. 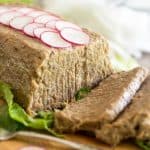 *Kindly ask your butcher to clean and cut the head into pieces for you
Author: Sonia! The Healthy Foodie 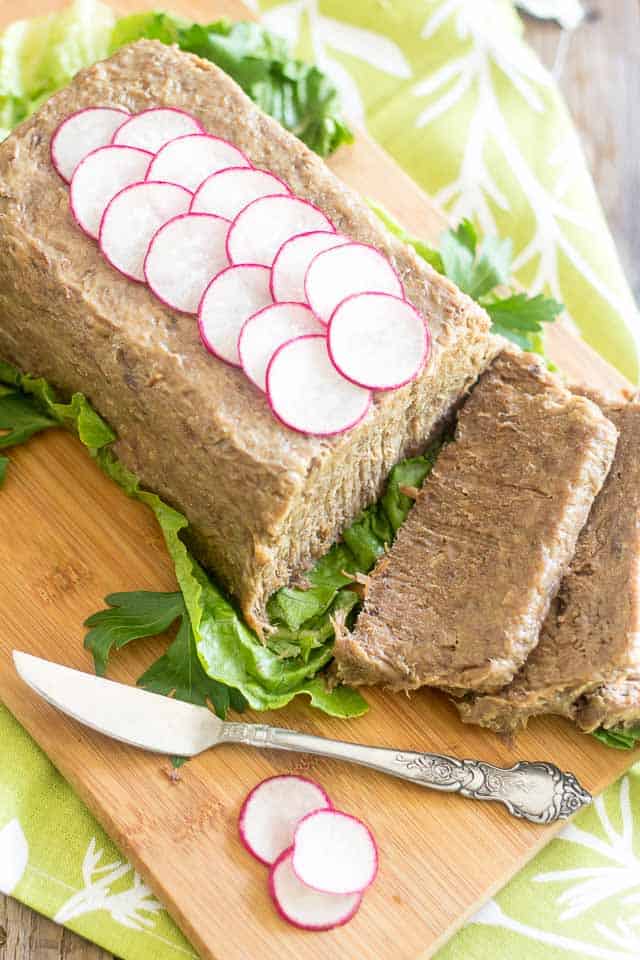 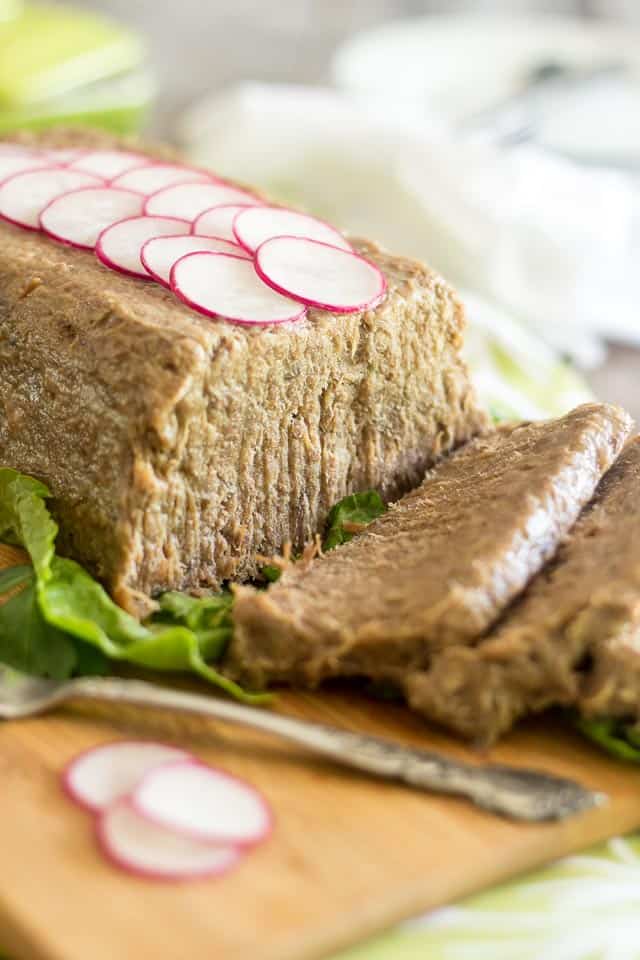 posted by Sonia! The Healthy Foodie on September 6, 2014